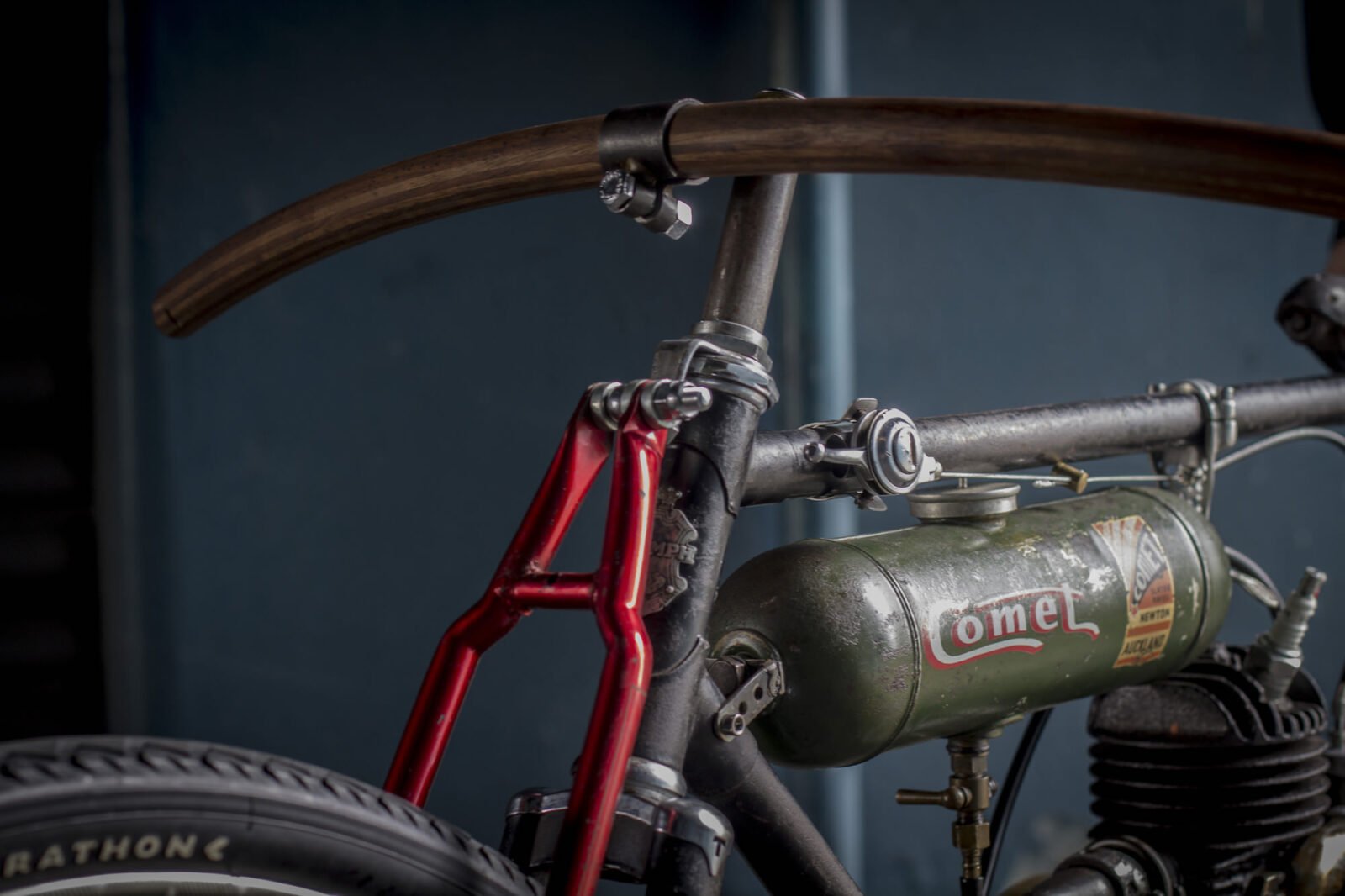 This Triumph Board Tracker is a motorcycle that was built far more recently that you might guess, utilising parts and engineering practices that were common back in the heyday of the board track racing revolution – from the 1910s till the late 1920s.

It uses a vintage Triumph bicycle frame that was sourced by New Zealander T. White, he comes from a long line of builders, carpenters, engineers, and boat builders – so he grew up building stuff with his hands. New Zealand has a proud heritage of producing some of the world’s best minds when it comes to mechanical engineering. Icons like Burt Munro, John Britten, Bruce McLaren, and Denny Hulme were all born and raised in New Zealand – and the tradition of ingenious backyard engineering remains strong in the country.

The Triumph Board Tracker project began when White came across an interesting Villiers Midget MKII 99cc lawnmower engine from the 1950s on TradeMe (New Zealand’s version of eBay). The engine cradle was made bespoke, using a template to get the shape right, it was then cut from stainless steel with speed holes throughout the reduce weight.

It was decided that an additional fork brace would be needed upfront, as the new machine would be capable of speeds far in excess of the single-speed Triumph it was based on. A small cylindrical Atco fuel tank was sourced and mounted under the top tube, with a unique wing nut hinge that allows the rider to tilt the tank for fill ups.

A new handlebar was fashioned from a length of wood laminate for additional strength, and a pair of rear-mounted BSA pedals were fitted to the rear axle to act as vintage-style rear sets. Getting the drive from the crank to the rear wheel involves a series of 4 sprockets, the system was designed and built bespoke for this bike and after a series of test runs it’s performed perfectly.

In order to fund future projects he’s decided to sell the Triumph Board Tracker, if you’d like to see more of his work or enquire about buying it you can click here to visit his official website. 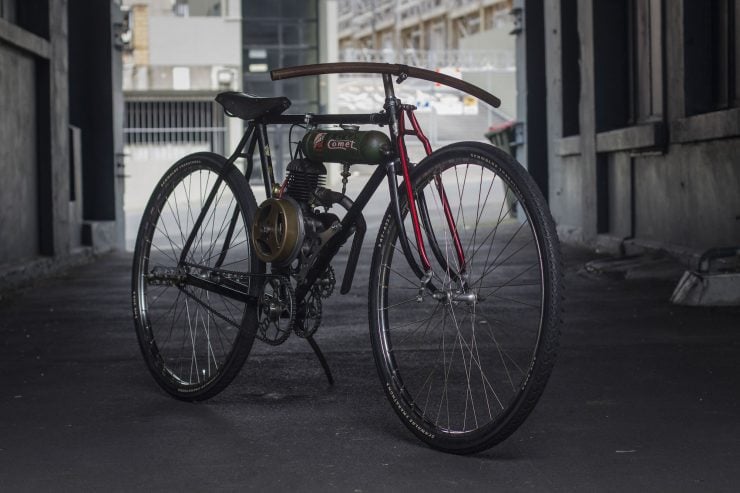 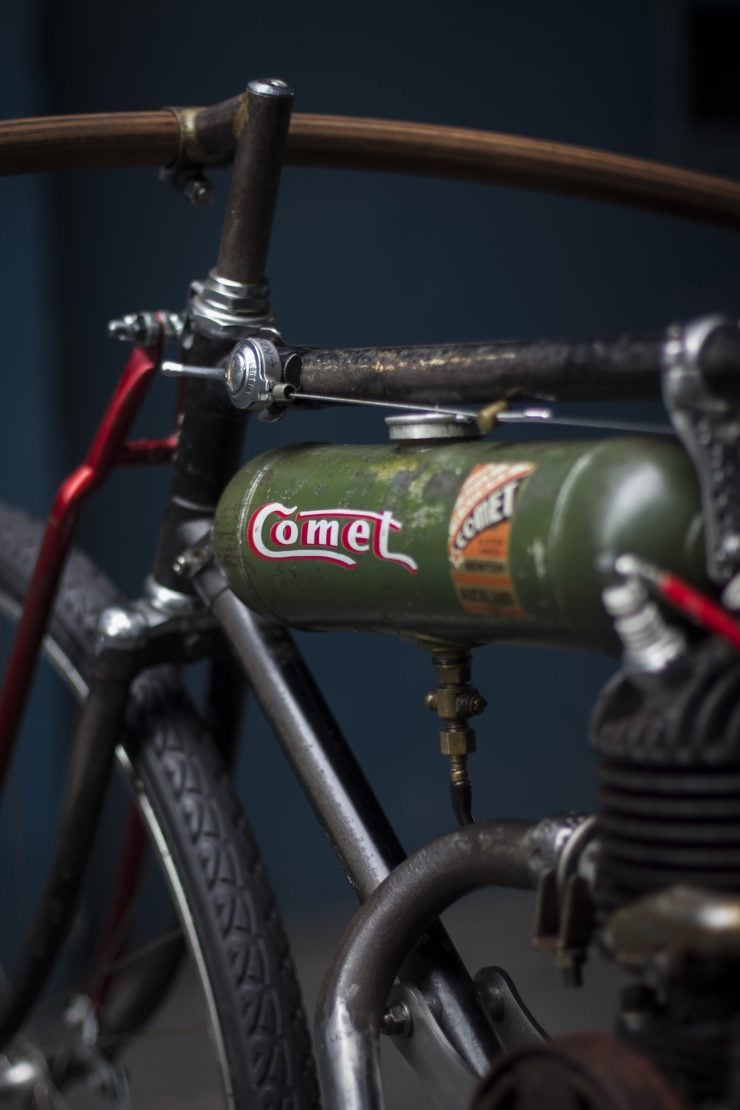 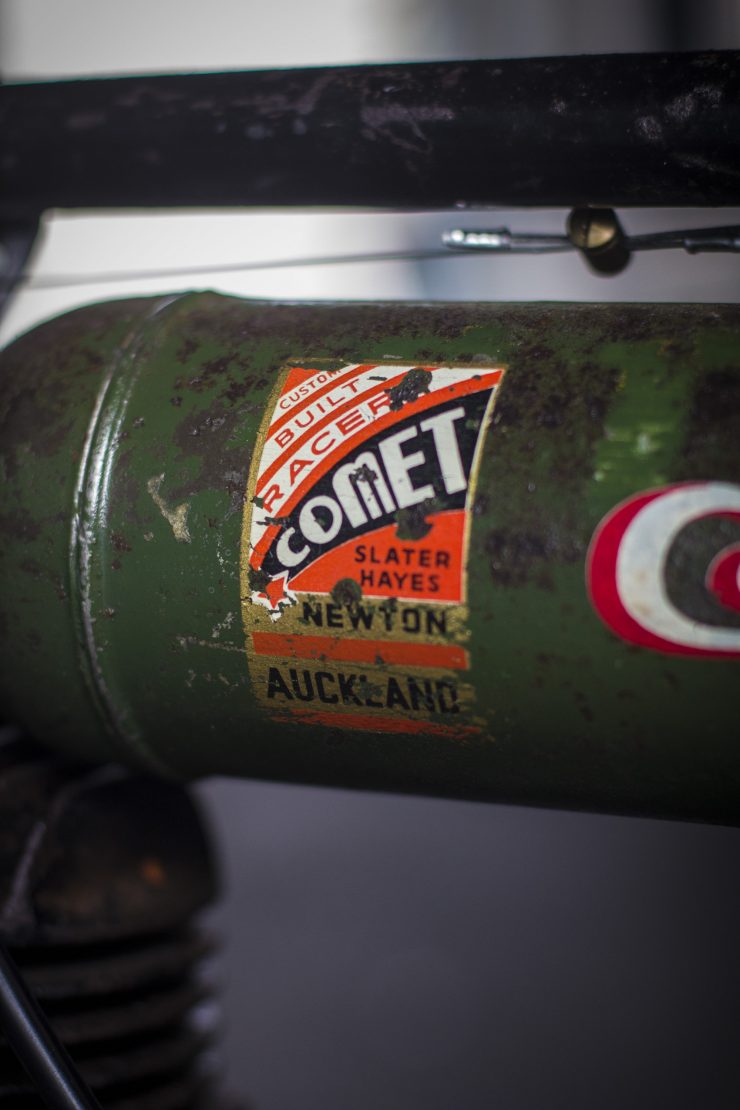 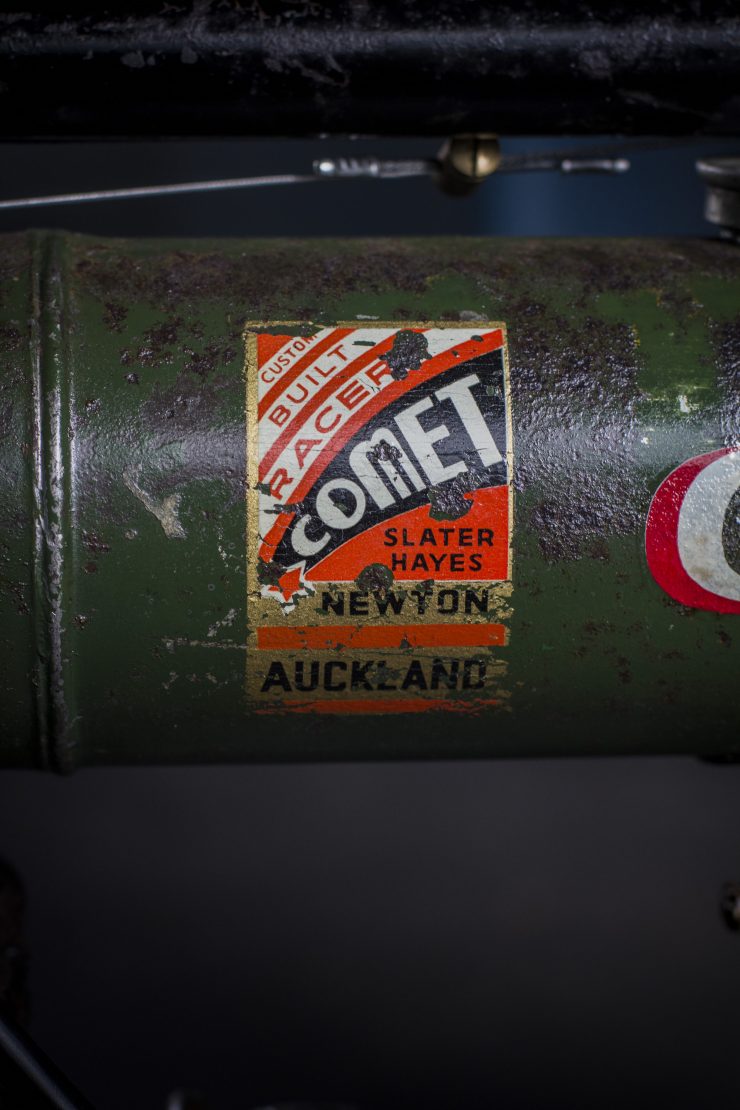 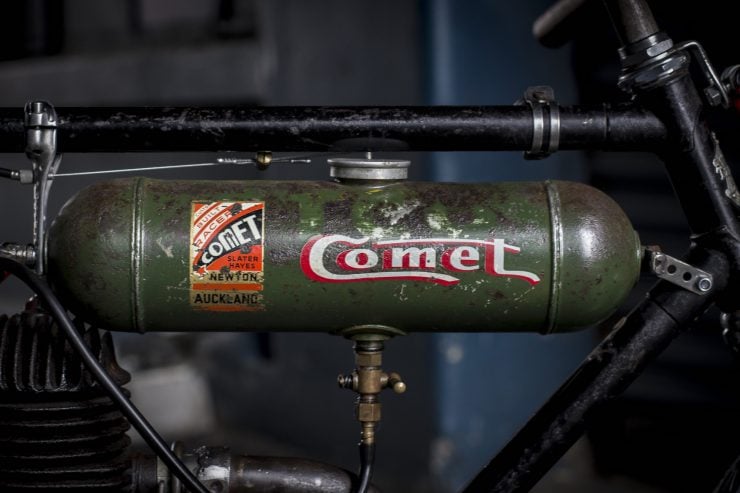 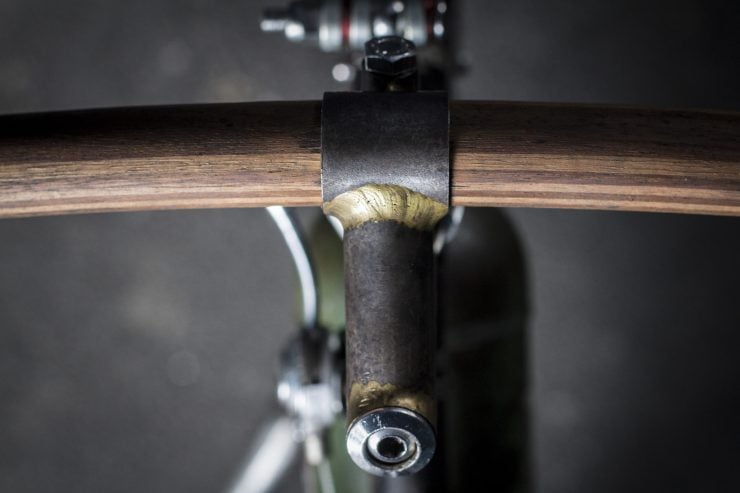 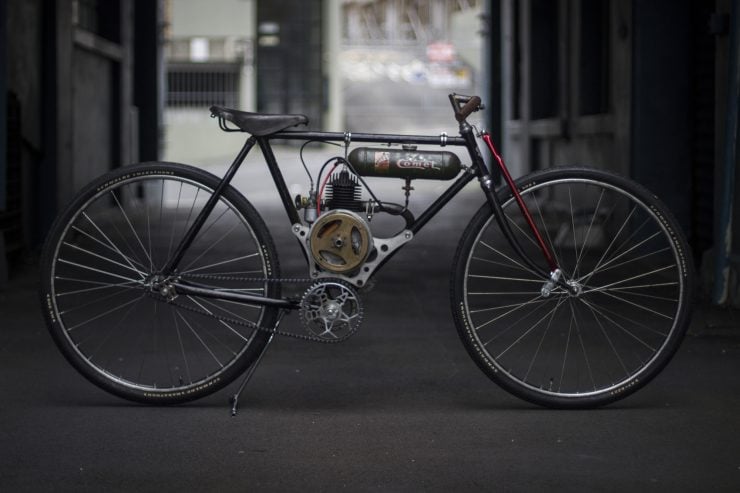 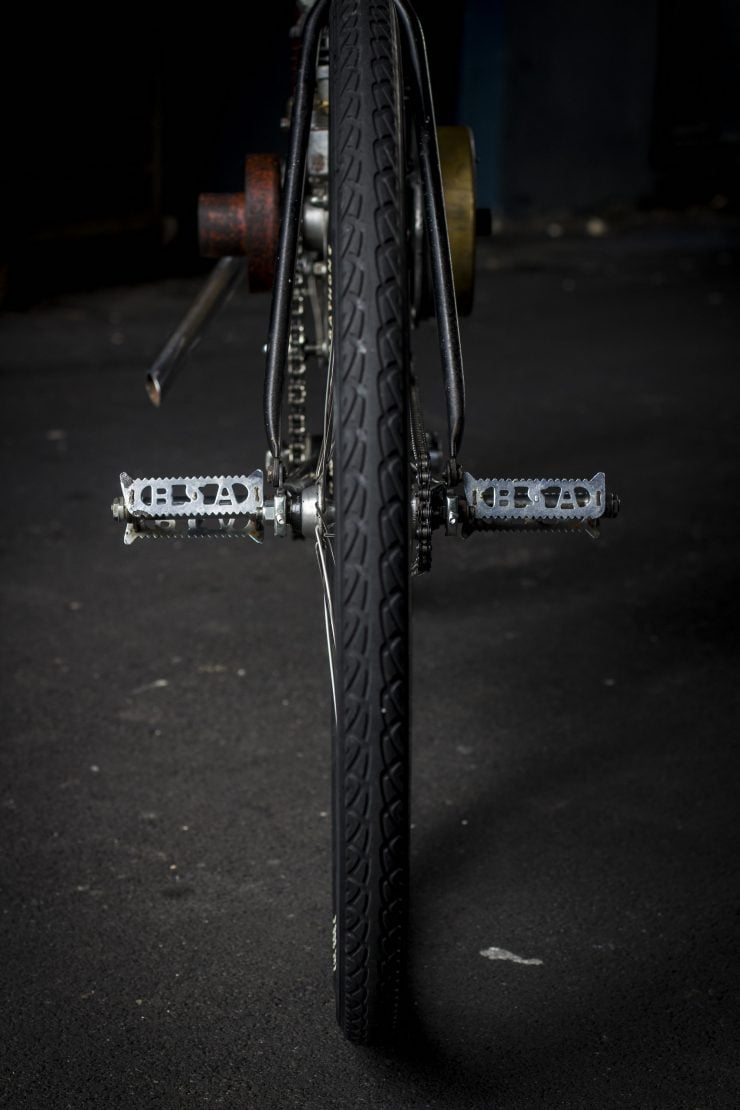 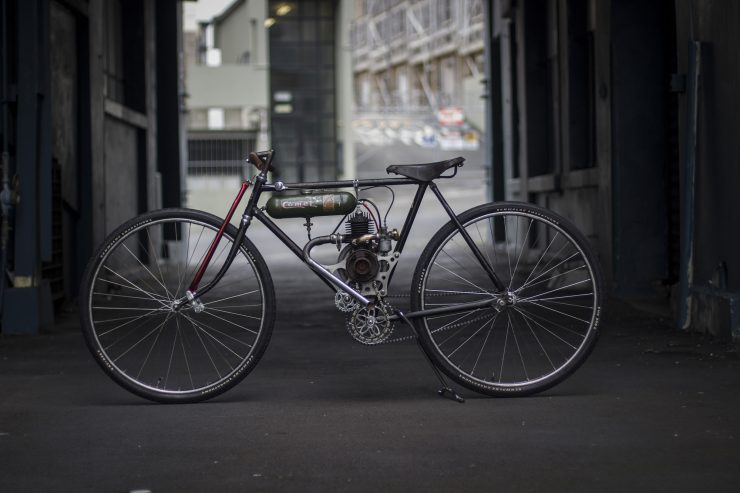 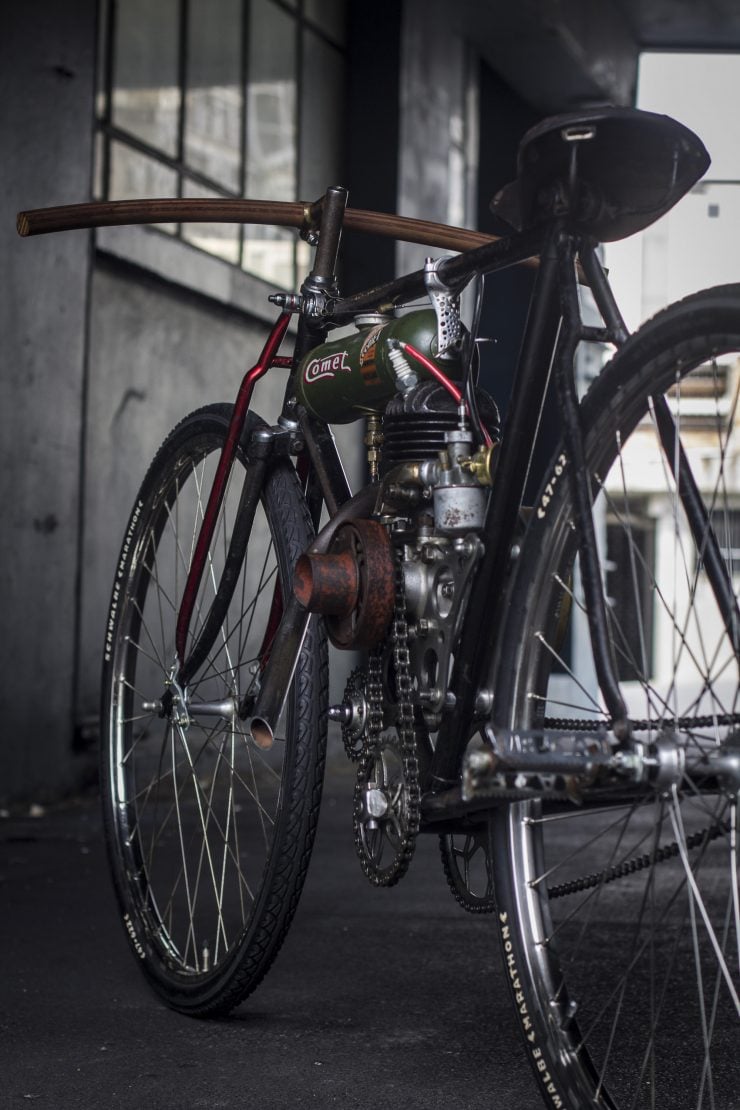 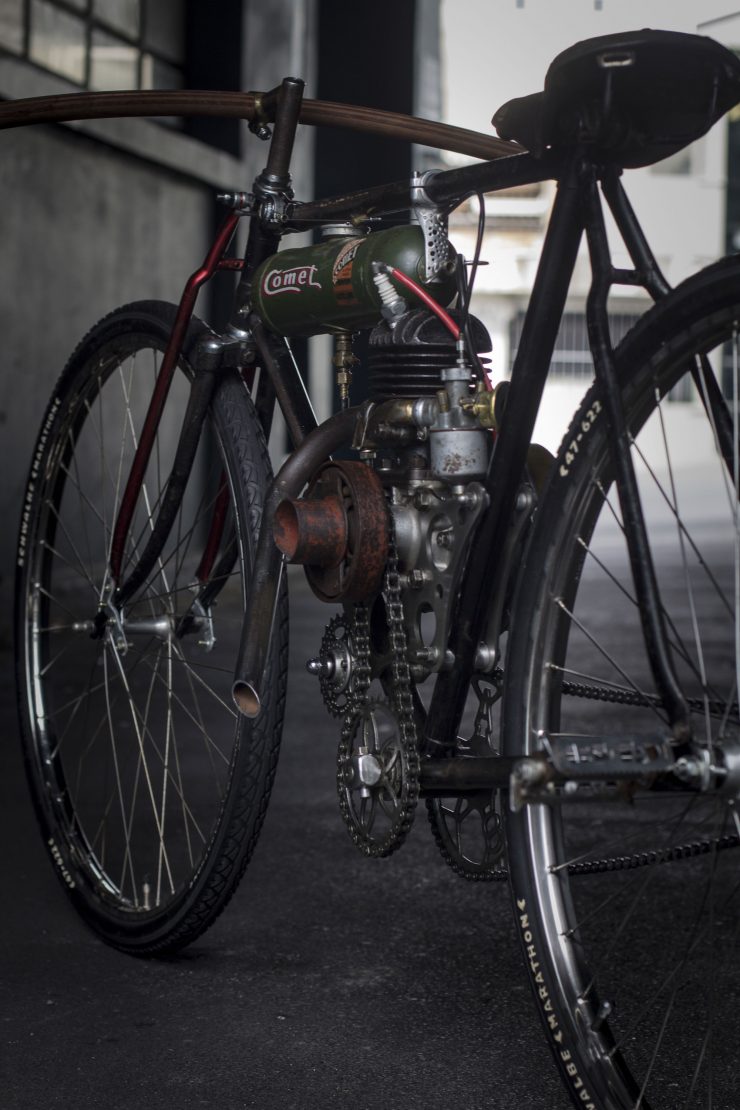 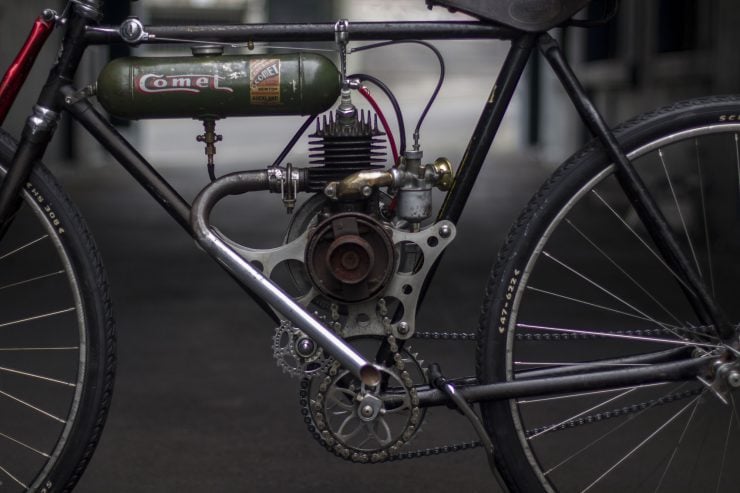 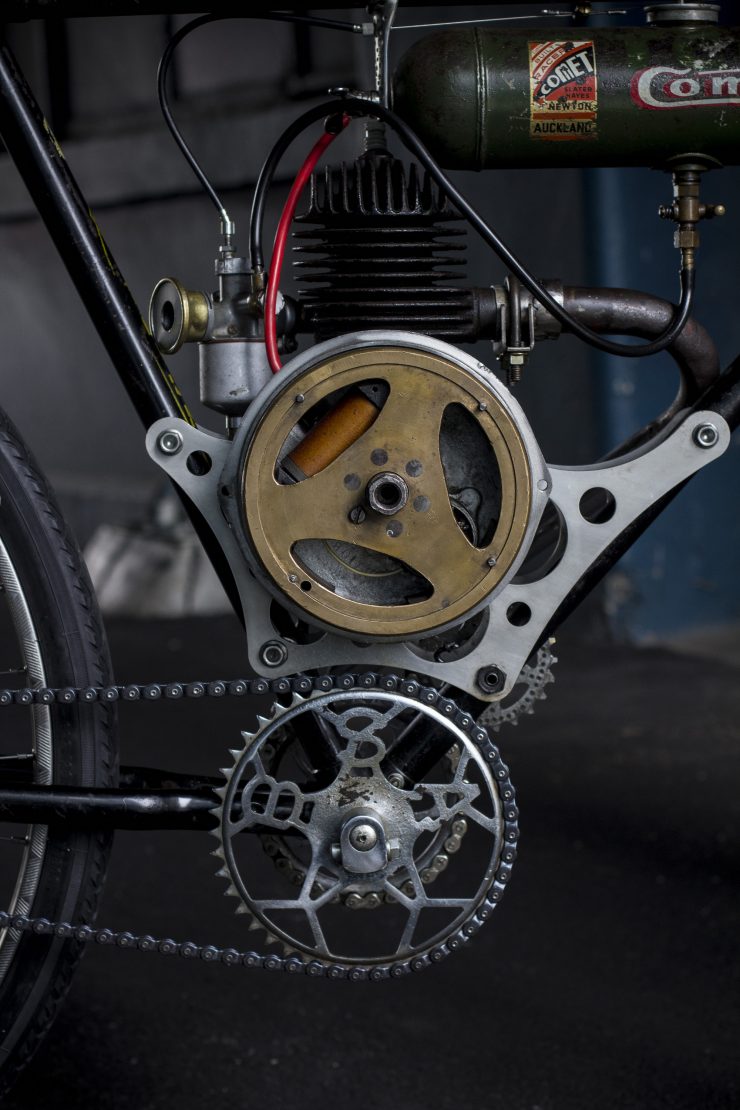 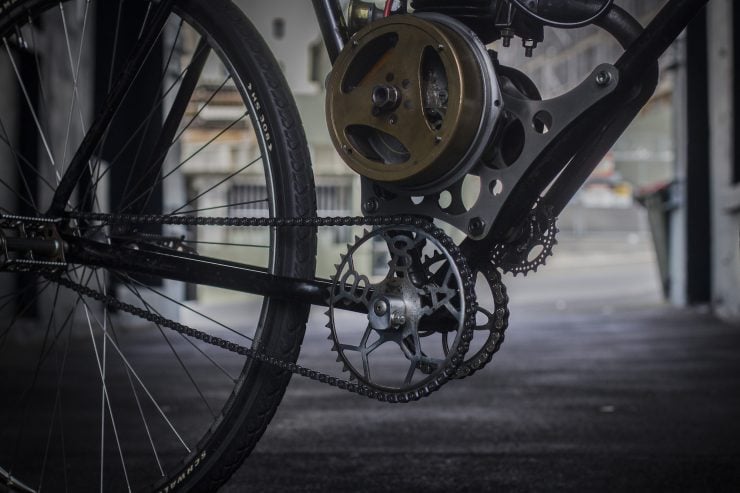 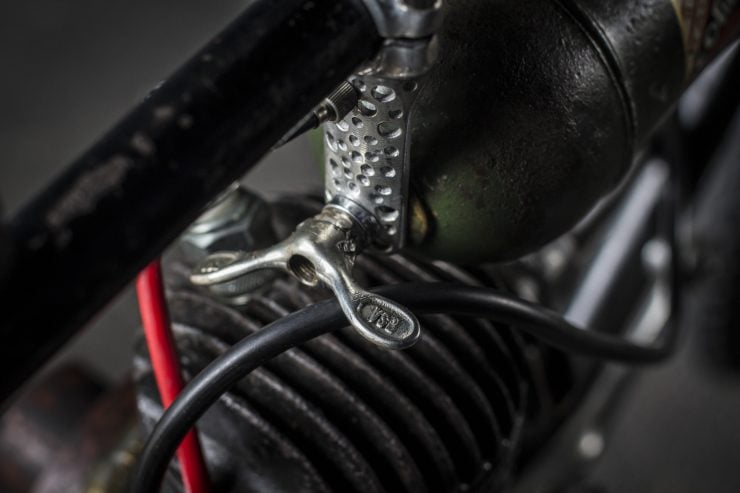 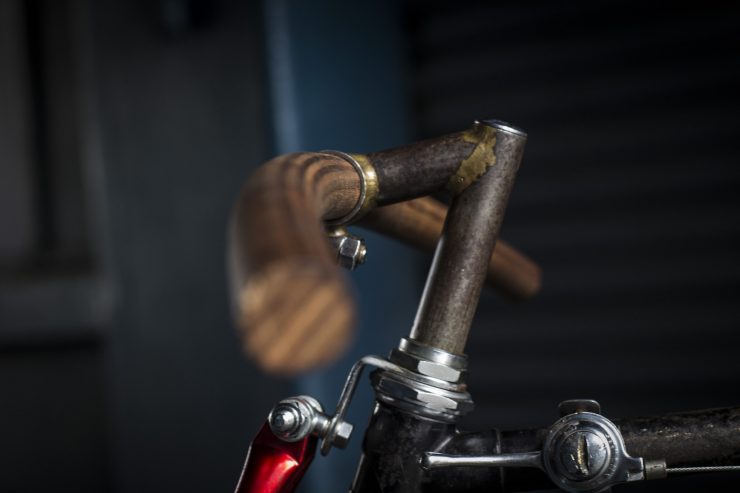 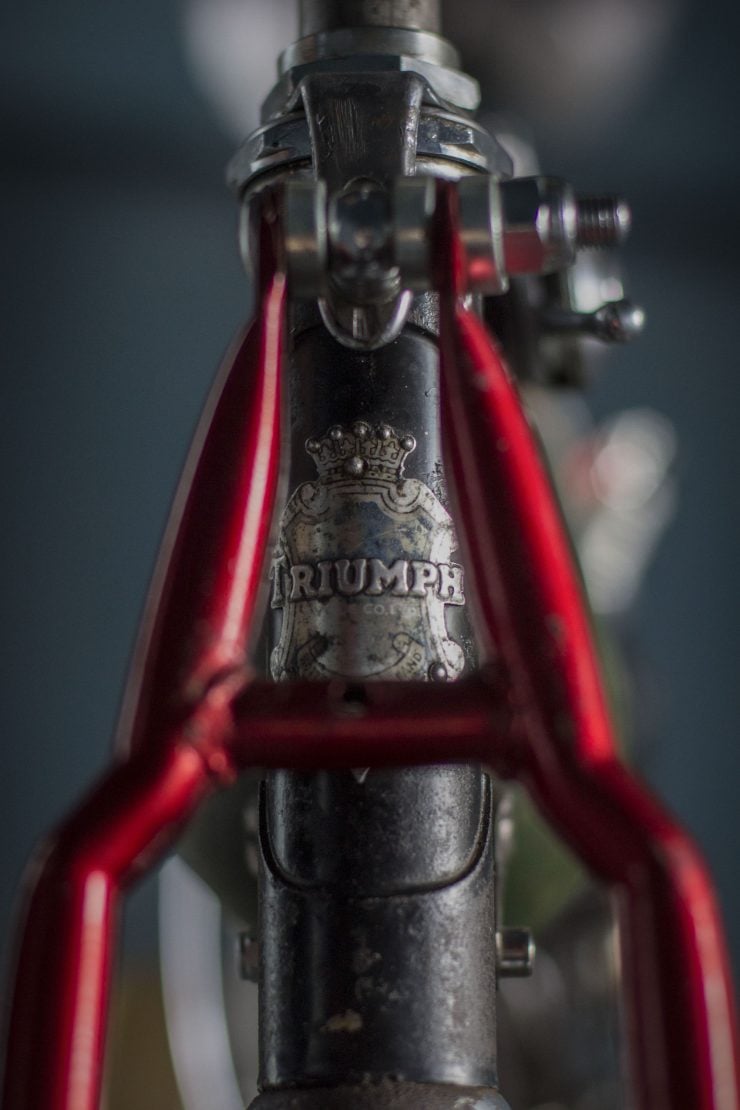 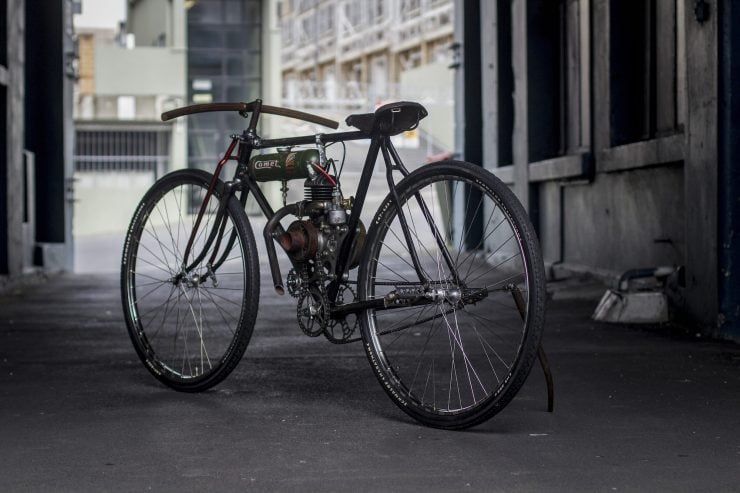 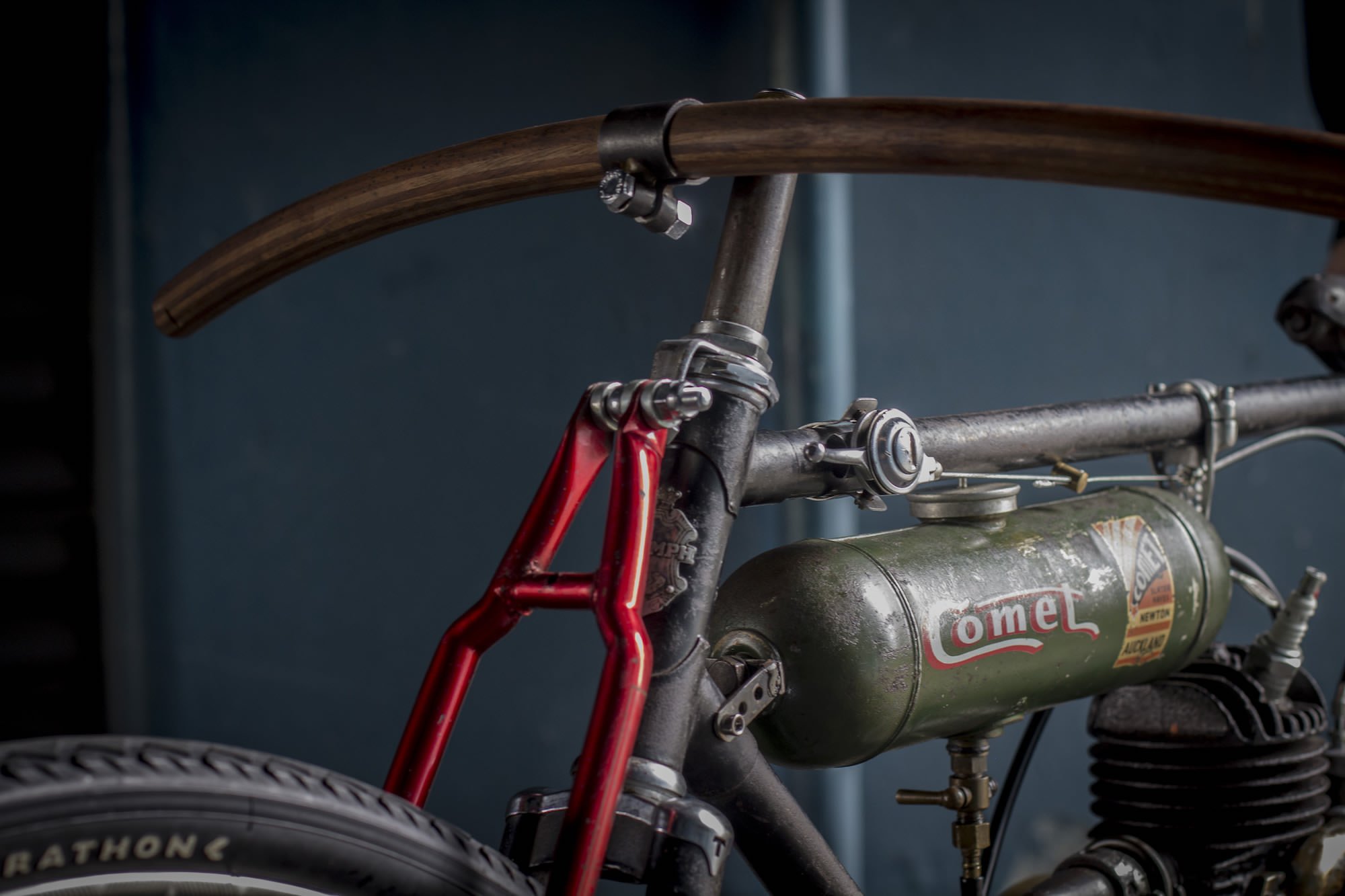