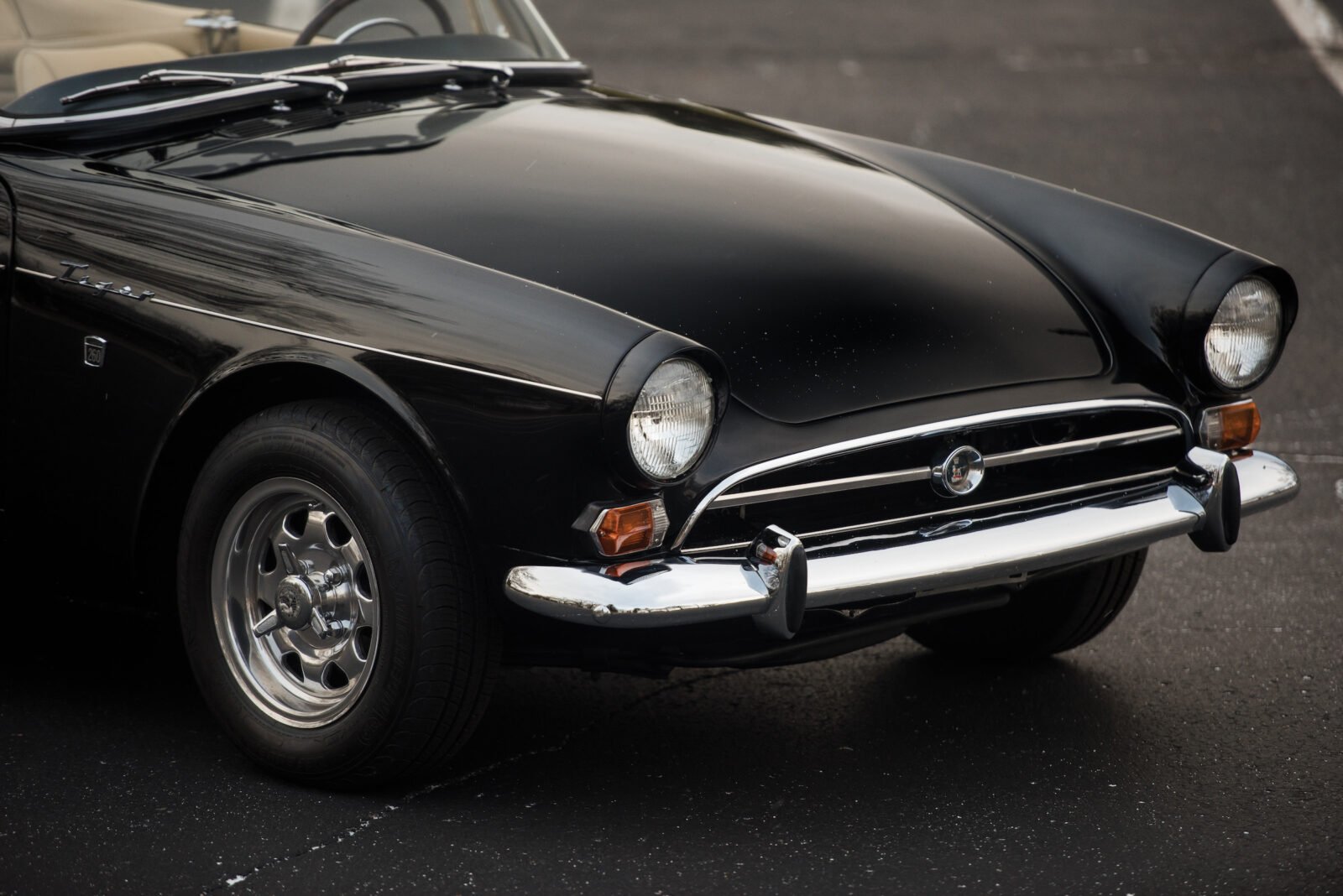 The Sunbeam Tiger famously features a V8 shoehorned into an engine compartment designed in England by engineers who would have been mortified had they known that their little roadster would, a few years later, be shipped off to a former chicken farmer’s garage in California where it would be hammered, cut, and welded to accommodate the 260 cubic inch Ford V8.

As is often the case when Brits and Americans build cars together, the Tiger both handles well and has a solid power-to-weight ratio. Other examples of this cross-Atlantic phenomena include the Allard J2, the Shelby Cobra, the Jensen Interceptor, the Lister-Chevrolet, and of course, the Ford GT40.

The Sunbeam Tiger is one of Carroll Shelby’s most harmless looking creations, being based on the borderline-adorable Sunbeam Alpine that had styling reminiscent of the much larger Ford Thunderbird.

Although they may not look particularly fast, the Sunbeam Tiger is a born and bred Shelby creation, with a 260 cubic inch V8, a 4-speed manual gearbox, rack and pinion steering, and modified suspension. Despite the fact that a V8 was shoehorned under the hood the weight distribution was almost perfect at 51.7/48.3 front/rear, as the new Ford engine was squeezed as far back in the engine bay as possible.

Sunbeam had contracted Carroll Shelby to create the blueprint for the Tiger, it was down to him and his team to figure out how to squeeze the V8 into the engine bay. The car was originally known as the Thunderbolt, but the name was changed shortly before its unveiling at the 1964 New York Motor Show. The new name was a reference to the 1925 Sunbeam Tiger that had set a land speed record of 152.33 mph on the beach at Southport in March 1926. 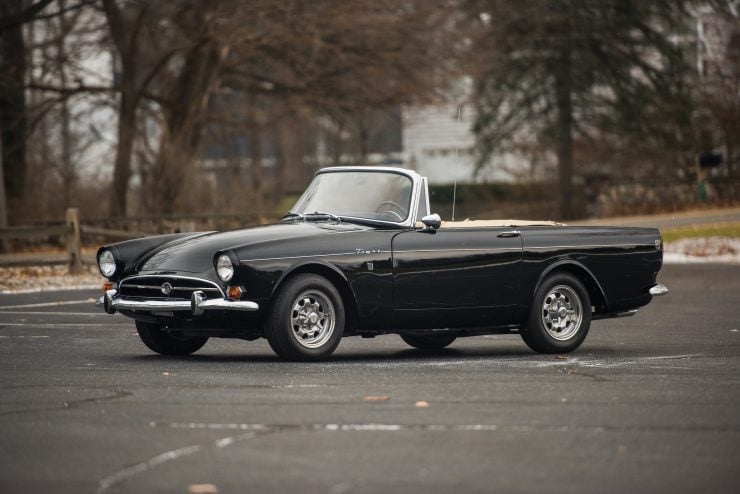 Comparisons to the Shelby Cobra that had first been seen in 1962 fitted with the same 260 cubic inch Ford V8 were inevitable, and the Tiger would later go on to be fitted with the 289 cubic inch unit that had been used in Cobras as well. The similarity between the cars was no bad thing, and there were more than a few races between them – both on the track and in private hands on public roads.

The contract to build the Tiger was awarded to Jensen in England, as management at Sunbeam were a little wary of Shelby’s close ties to Ford. Although in retrospect it would likely have saved them money to have had them built by Shelby in the USA as most of them were sold there anyway – and Sunbeam paid Shelby a royalty on every Tiger they built.

There were two major versions of the Tiger, the Mark I and the Mark II. There would potentially have been more, but Sunbeam (as part of the Rootes Group) had been sold to Chrysler in 1967, so the continued use of Ford engines was out of the question – and Chrysler had no V8 that would fit under the hood of the Tiger.

The Sunbeam Tiger Mark I

The Mark I Tigers were fitted with the 260 (4.3 litre) V8 in a relatively low state of tune – just 164 bhp was available, although some enterprising dealers in the USA offered performance upgrades that boosted power to over 240 bhp and well over what the brakes, tires, and suspension could reasonably handle.

The Mark II Tigers were fitted with the more powerful 289 cubic inch Ford V8 (4.7 litre), which lowered the 0 to 60 mph time from 8.6 seconds to 7.5 seconds. The price point of the Tiger was approximately 30% higher than the Ford Mustang, and by the time it was introduced in 1967 Chrysler was already running the show, and the Ford badging had been replaced by “Sunbeam V-8” badges. The writing was already on the wall for the mighty little Tiger, and production wouldn’t survive till the end of the year.

The car you see here is a 1966 example that is still fitted with its original 260 cubic inch Ford V8, and importantly it was ordered from the factory with the Super Induction kit, an engine dress-up kit (that features many aluminum parts), a Holley four-barrel carburetor, a six-blade water pump fan, a high-performance camshaft, a Tiger valve cover kit, and a bolt-on Traction Master.

The car is now wearing a fresh coat of black paint (note: the white specs in the images are snowflakes, not paint imperfections), and it is accompanied by the removable factory hardtop, a folding convertible top, a tonneau cover and a boot for the convertible top. It has a beautiful tan interior and it’s equipped with a radio and seatbelts. 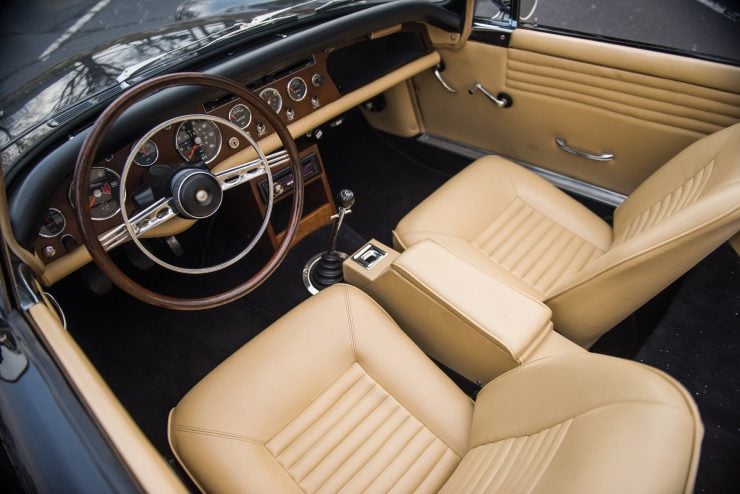 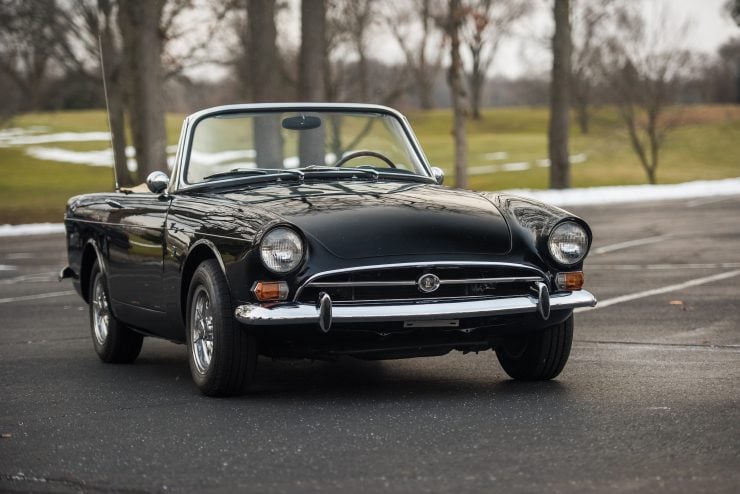 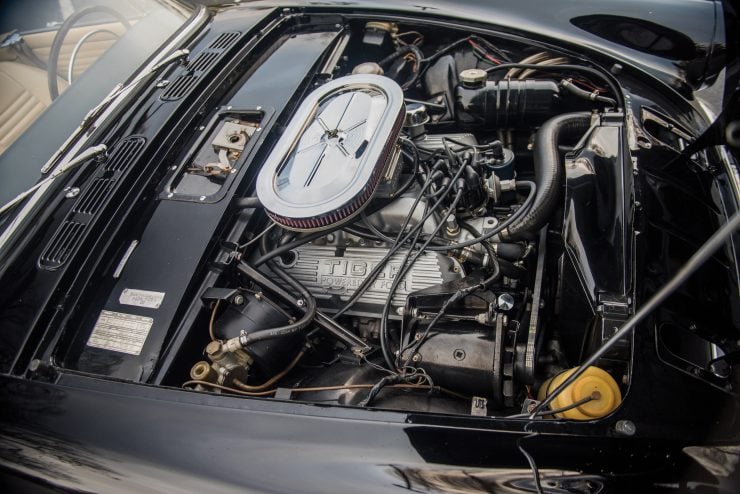 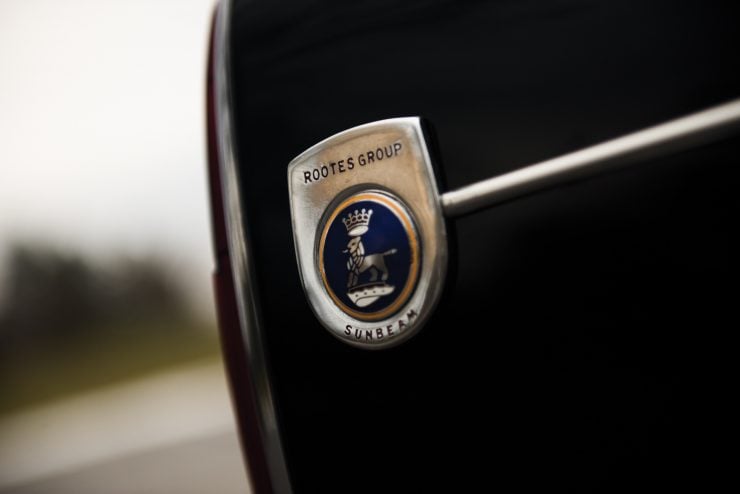 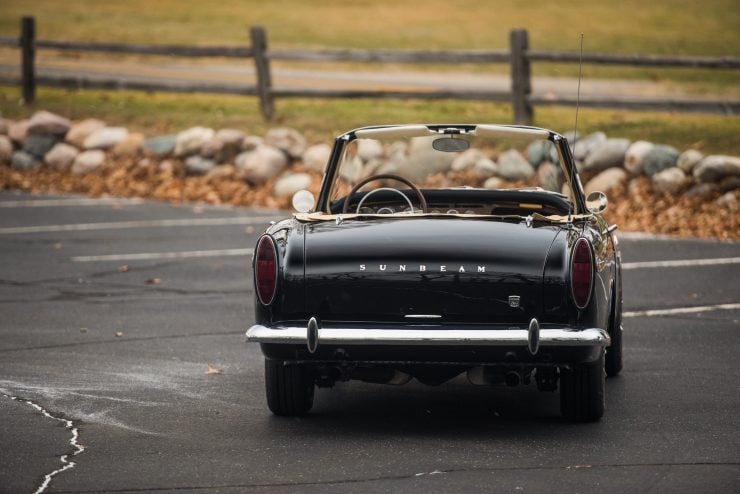 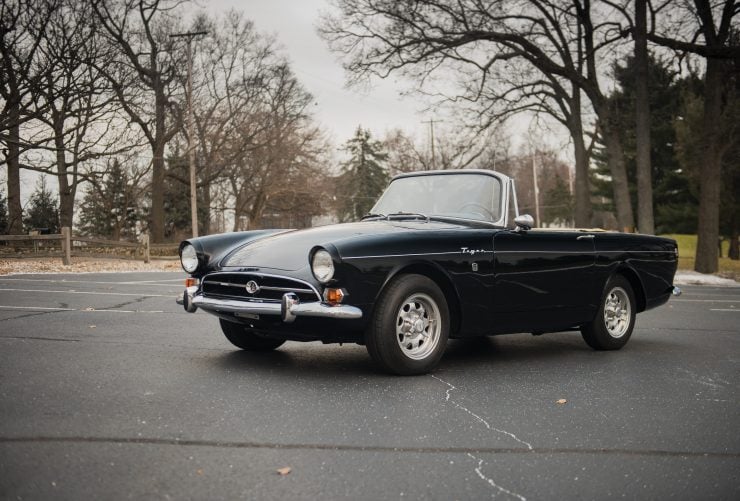 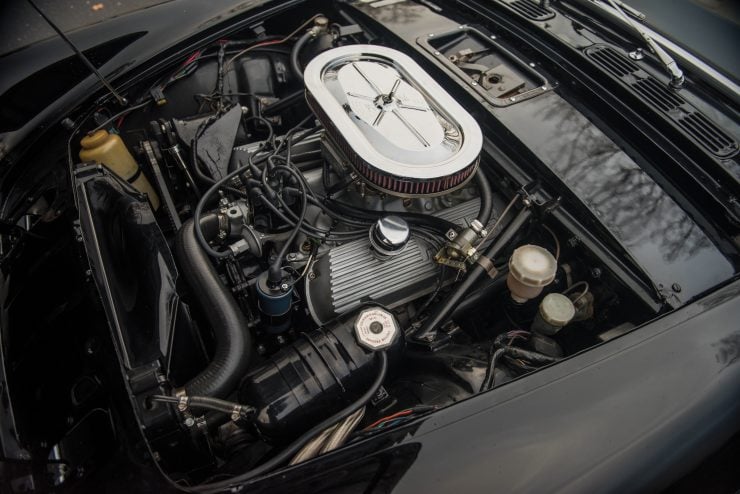 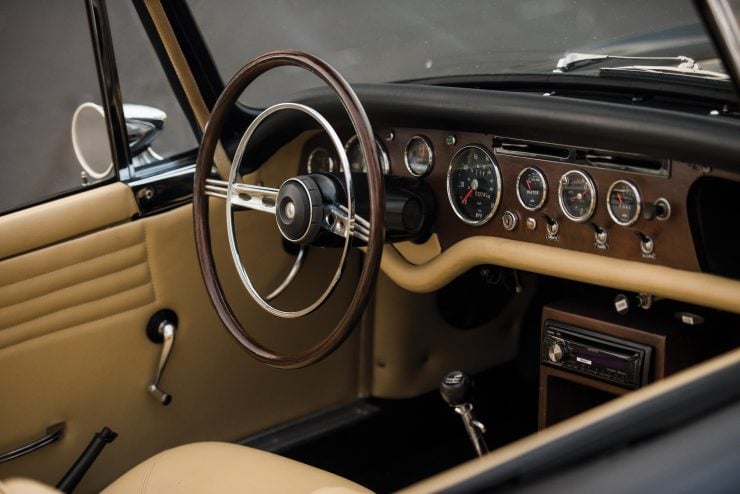 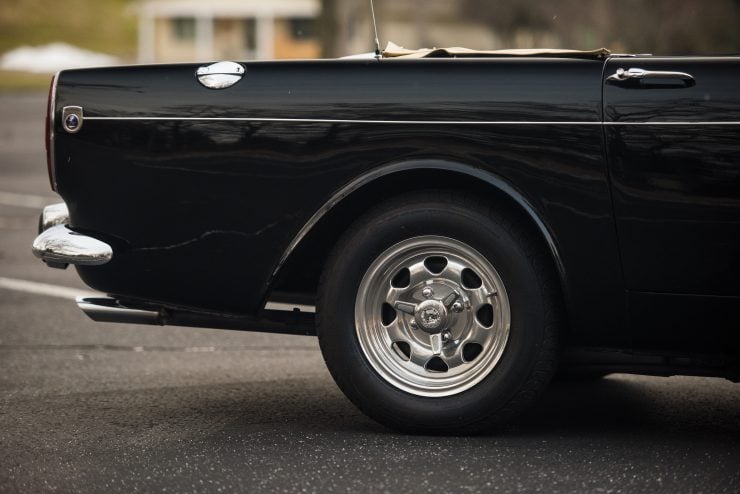 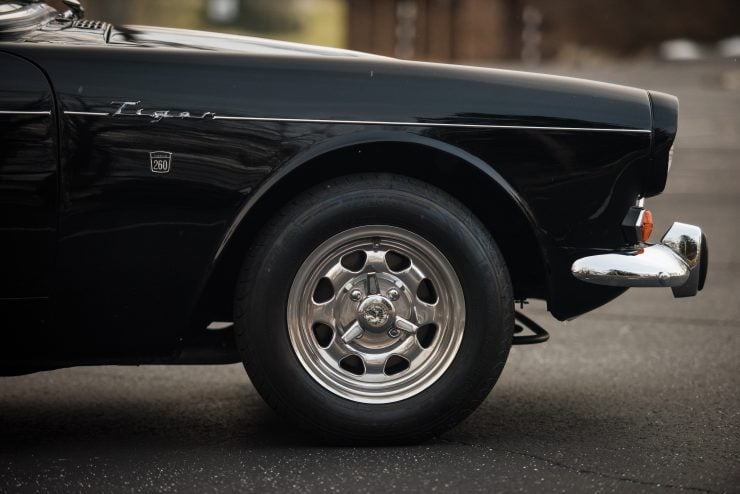 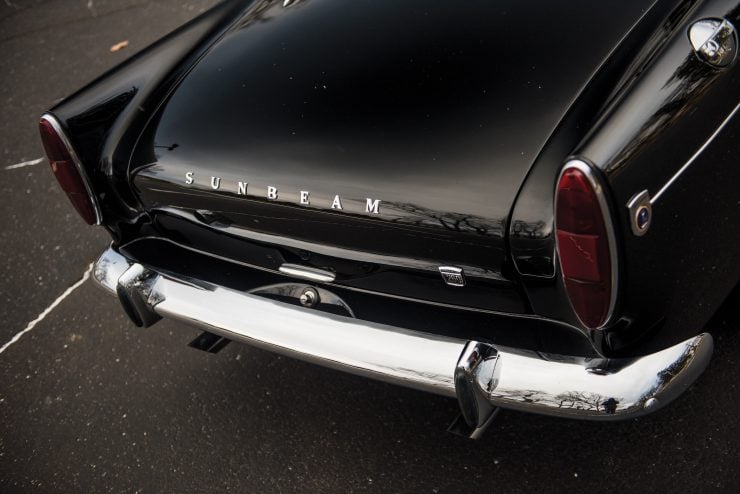 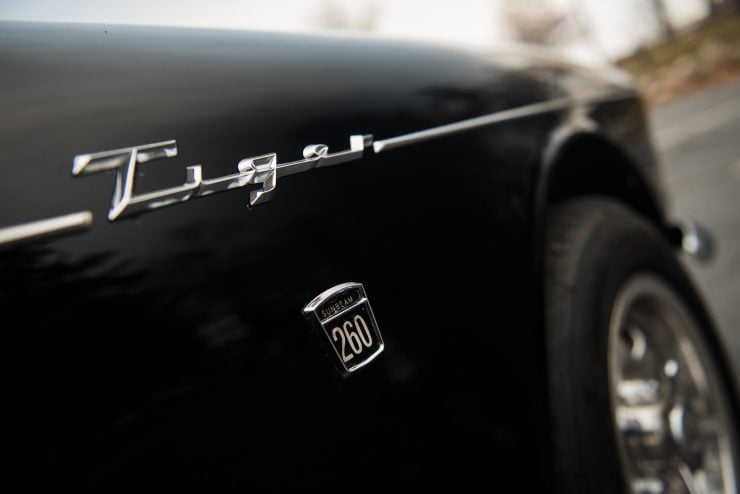 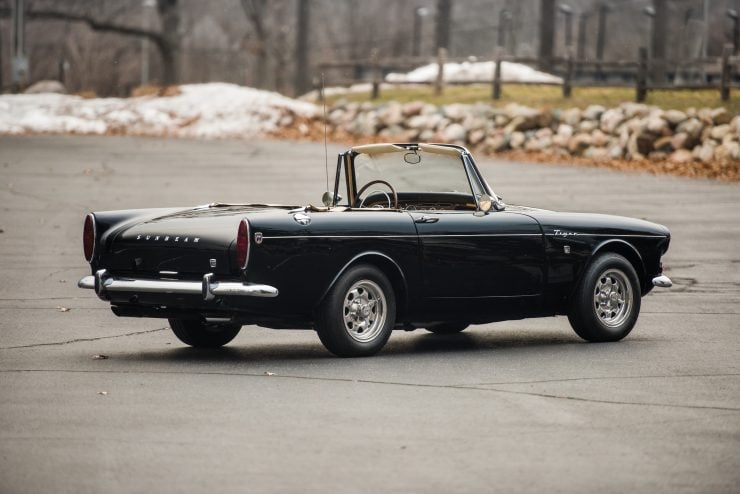 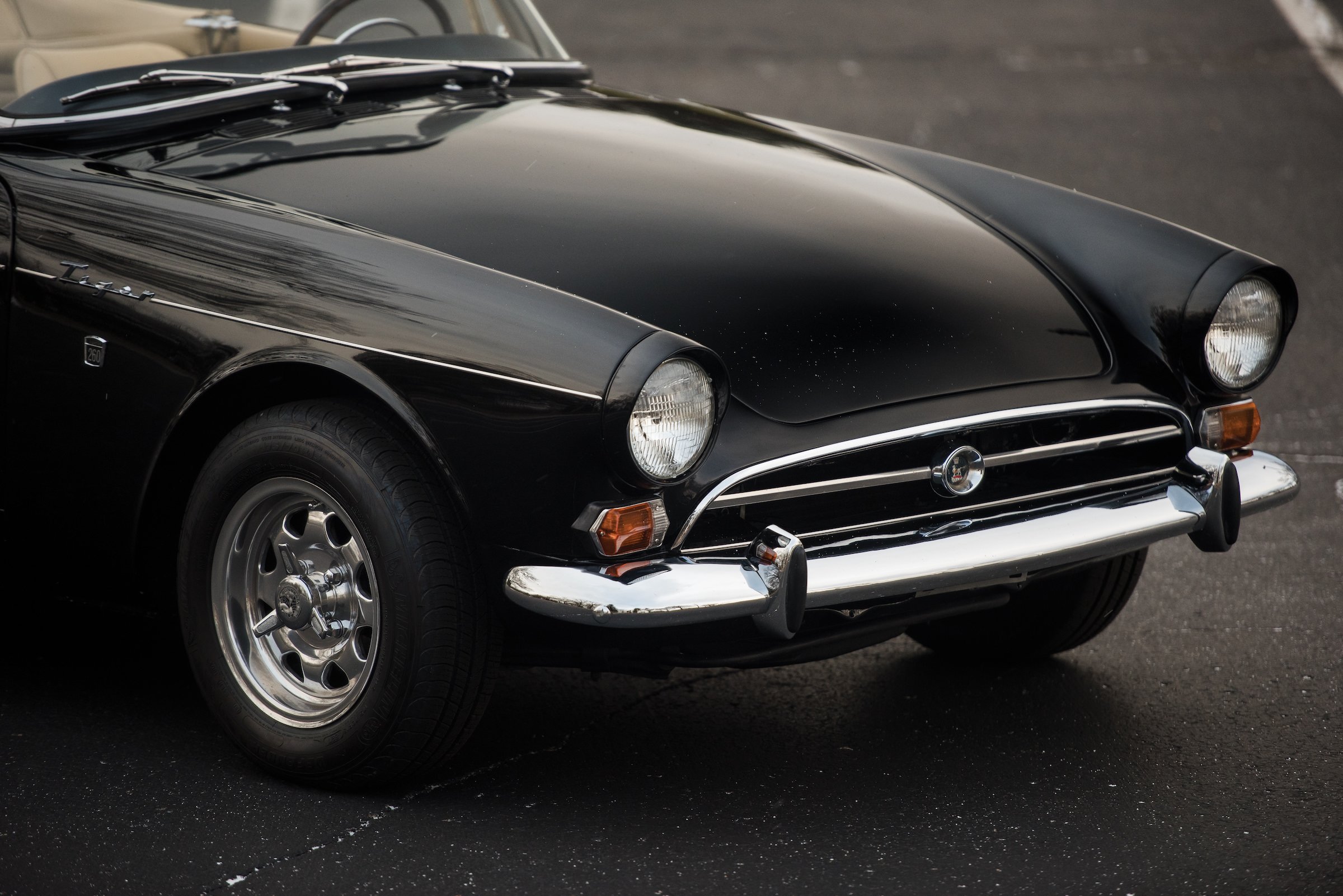