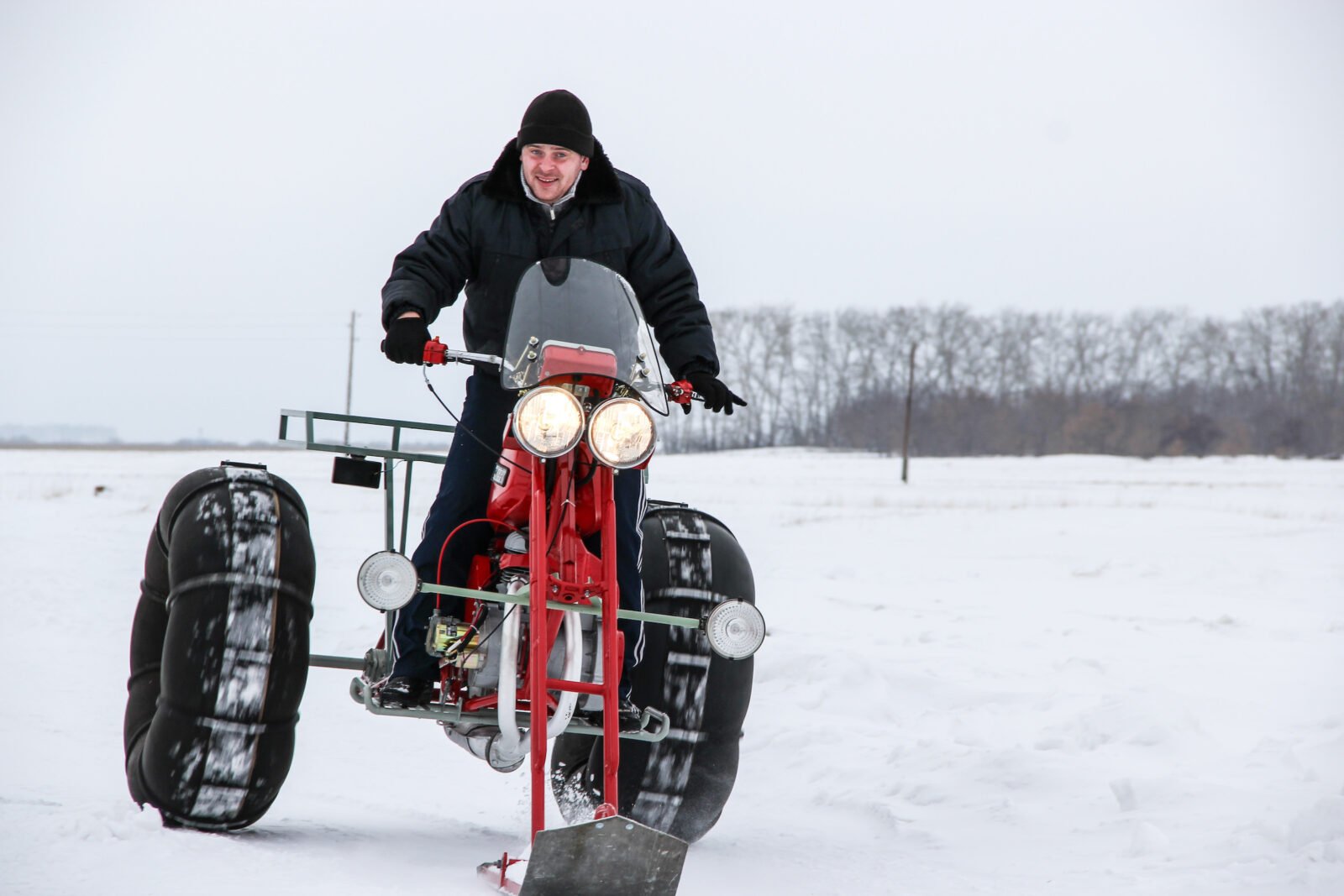 Roman Bulach is a Russian engineer who lives in Siberia, specifically in the Novosibirsk region of western Siberia. Siberia is famous for both its beauty and for its rugged terrain. Normal vehicles are largely pointless as they’re incapable of traversing the local landscape – which is typically made up of deep snow, forests, rivers, muddy swamps, and the occasional mysterious meteorite crater.

It was with this basic set of criteria that Roman set about creating his ideal winter snow trike – he started with two quintessentially Russian vehicles, a 1988 IZH Planeta motorcycle and an SMZ S-3D small car. Roman’s love for vehicles and engineering comes from his father who was similarly inclined – and equally interested in the hands-on aspects of engineering and mechanical design. 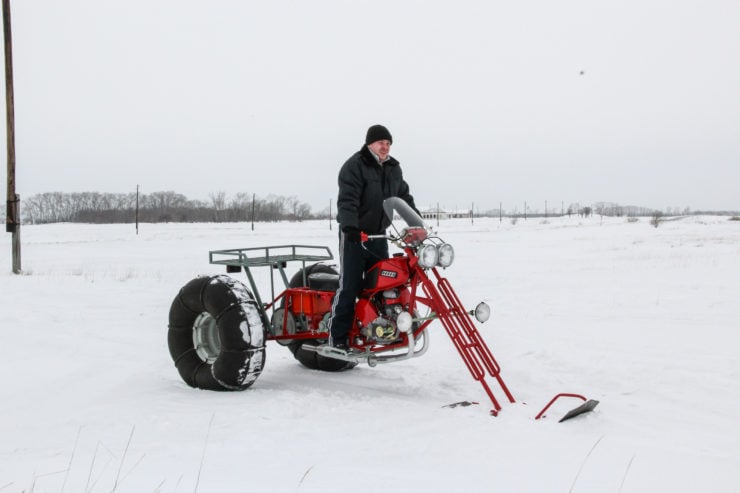 The IZH Planeta is one of the most common motorcycles in Russia, it’s a simple, tough design and this model has an air-cooled 346cc two-stroke engine, a 5-speed gearbox, and a tubular steel frame. The SMZ S-3D is a cheap small car designed to make automobile ownership possible for people without the economic means to buy more traditionally sized cars. It’s powered by a modified version of the same two stroke engine as the IZH Planeta, however it has a starter motor and forced air cooling – two features that Roman wanted in his Siberian trike.

The project began with Roman stripping the IZH Planeta down to basics and designing a new rear subframe. The swing arm and shock absorbers were removed and would no longer be needed – suspension would now be provided by the snow itself and by the soft side walls of the large rear tires.

The engine from the SMZ S-3D was fitted to the Planeta frame, giving the bike better cooling at lower speeds and that starter motor in place of the kickstarter. The chain drive was kept, now running through an extra sprocket to a sold rear axle – no differential is needed because the surfaces the vehicle is used on allow plenty of wheel slip. 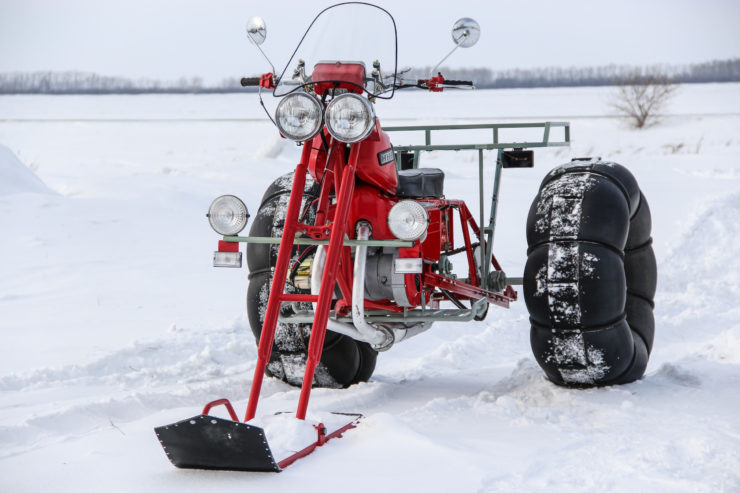 Roman took a pair of old truck wheels and fitted belted tubes to them, then strapped the tubes down with belts from old agricultural machinery to add better traction across the snow, almost like snow chains on car tires. Up front the original telescopic forks were removed and replaced with a new rigid, braced pair of fork legs that connect to a wide alloy ski.

In order to ensure the trike would be a genuinely practical machine for use in Siberia, Roman added a hefty steel luggage rack to the rear and fitted the original motorcycle seat that can accommodate two adults. He tells us that when fully loaded the trike can hit 50 km/h across flat snow – significantly faster than the vast majority of vehicles in the region.

If you’d like to stay up to date with Roman’s adventures with his trike you can click here to follow him on Instagram. He’s currently planning some modifications to the trike – including some front suspension to better soak up bumps in uneven terrain. 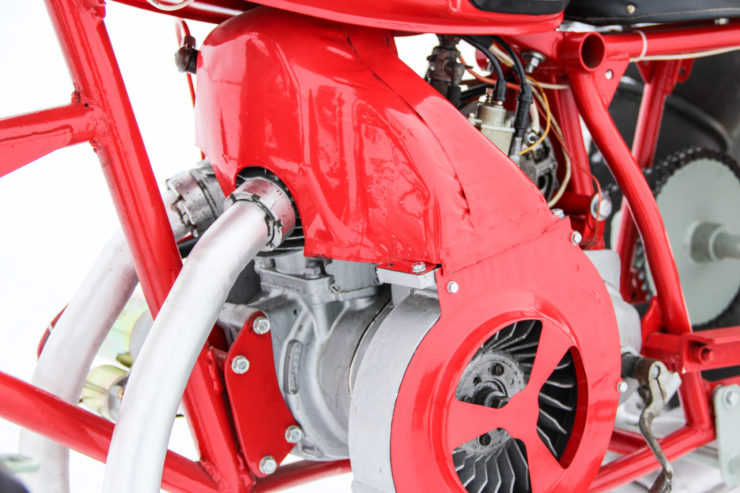 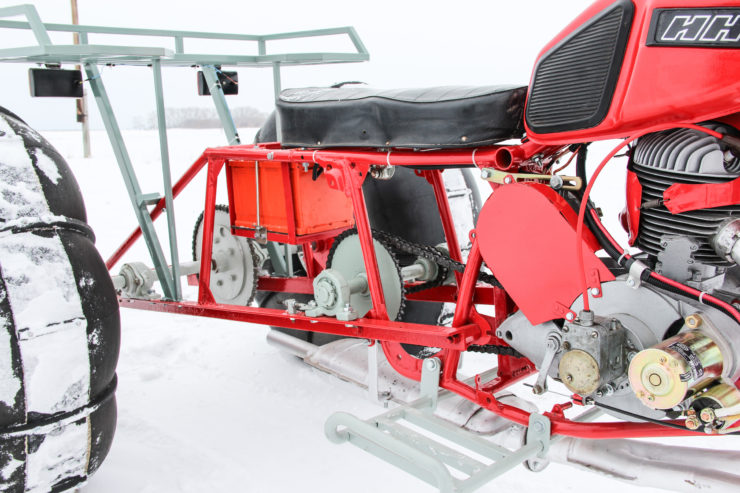 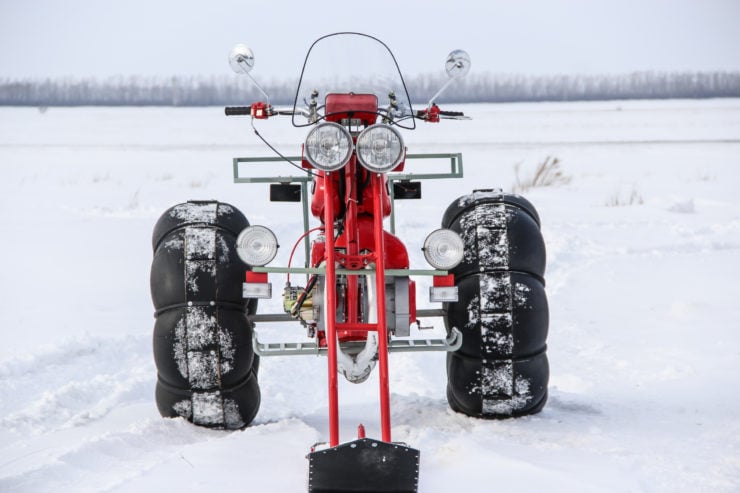 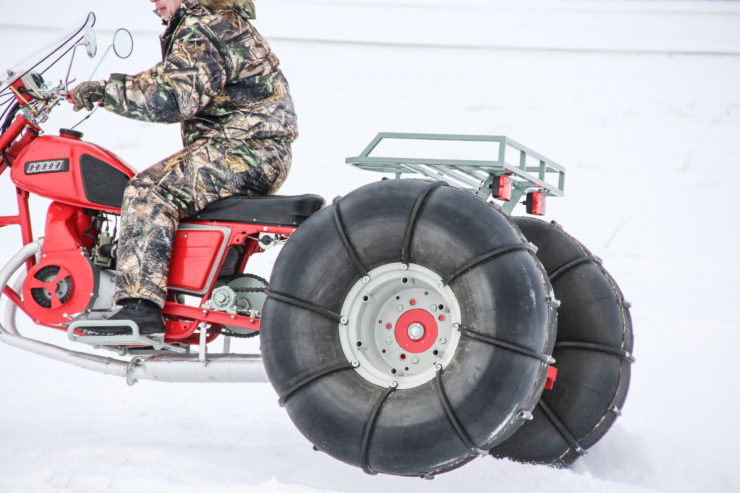 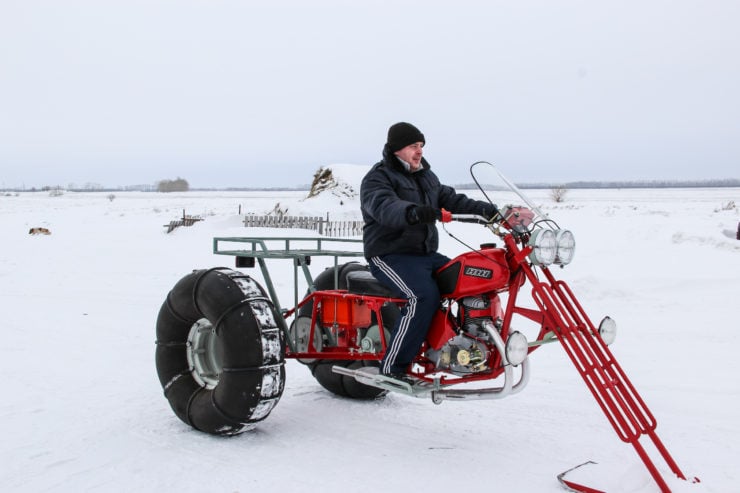 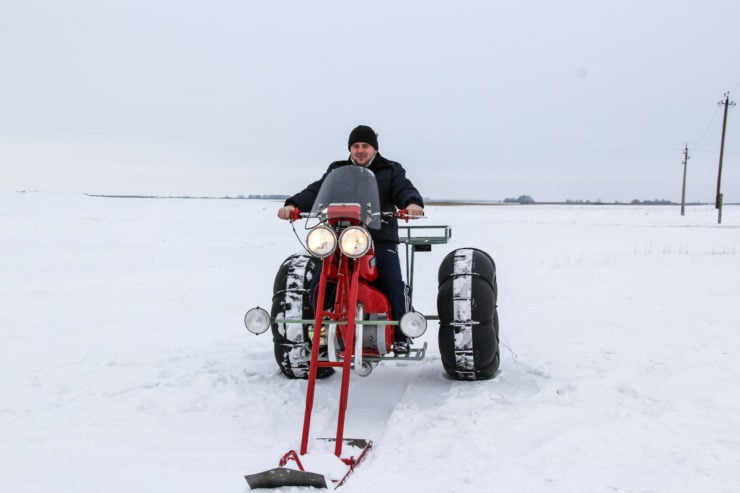 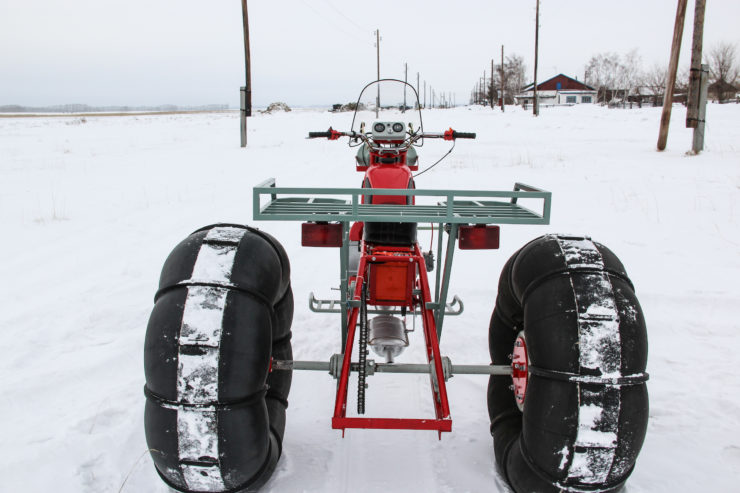 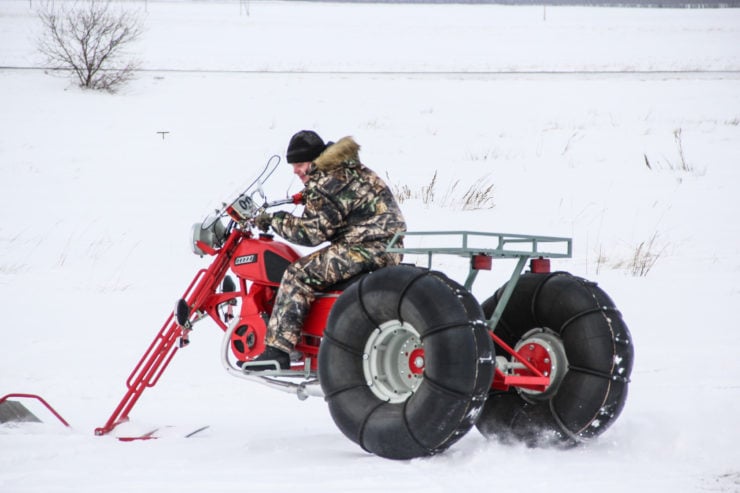 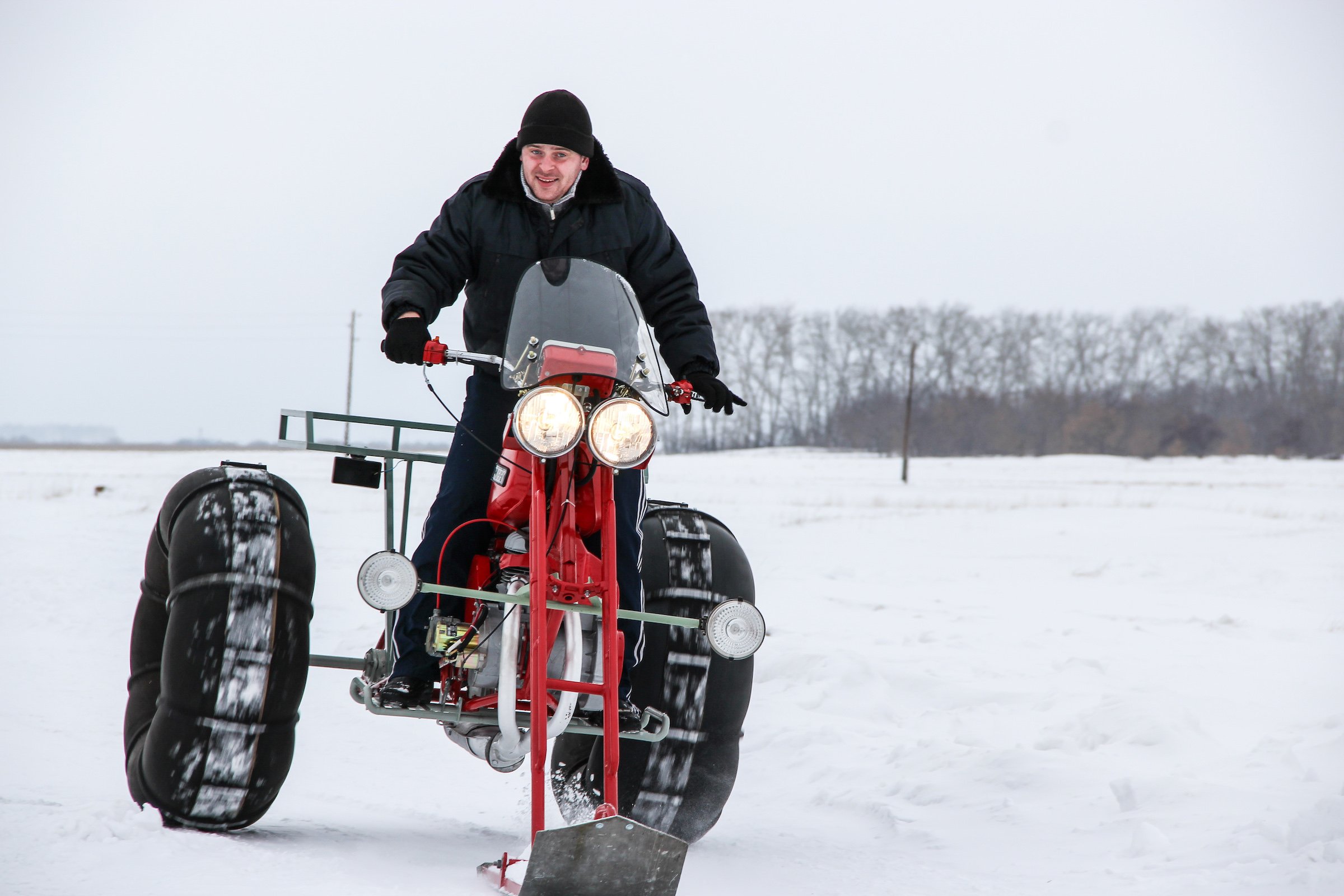