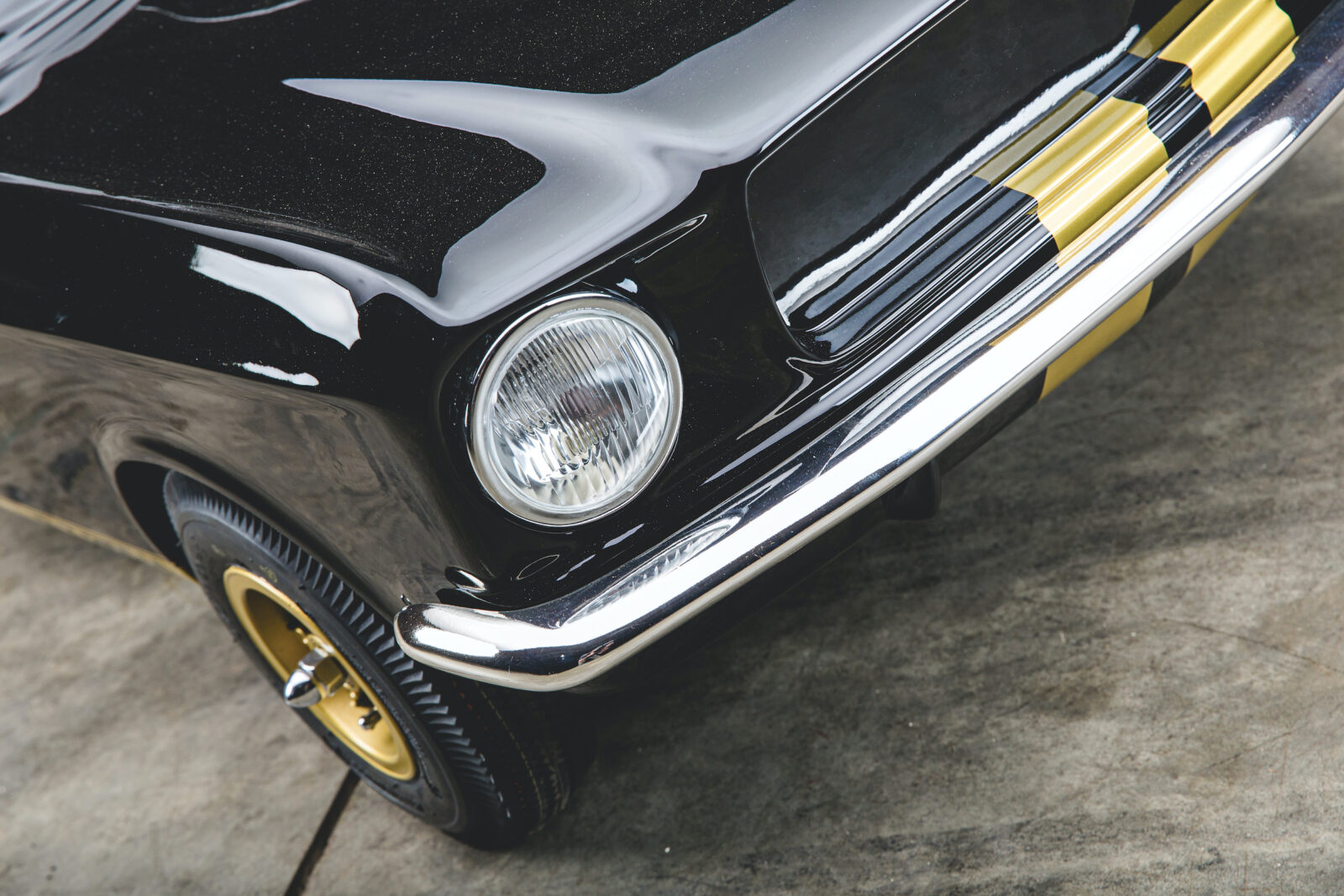 This is a Shelby GT350 H Junior, it’s almost certainly the cheapest drivable Shelby car in the world, but it’s also designed for children so you won’t be able to use it as a daily driver. That is unless you’re quite small or very good at yoga.

The original Shelby GT350-H still has the unique distinction of being the most famous rental car in history. In 1965 the GM of Shelby American, Peyton Cramer, and the executives at the Hertz rental car company came to an unusual agreement – They would offer the 1966 Shelby GT350-H as a rental car through the now-famous Hertz “Rent-a-Racer” Program. 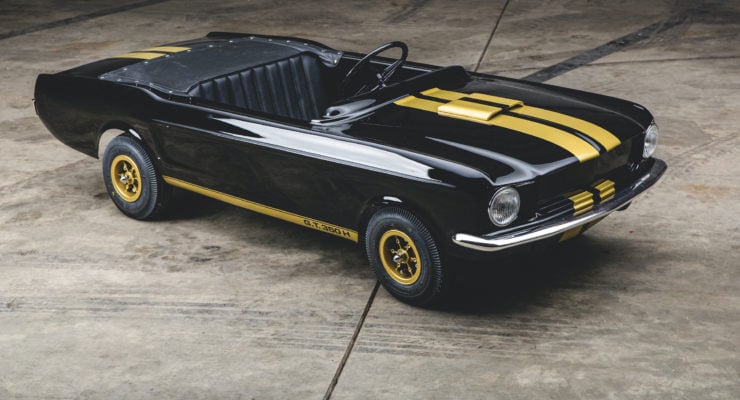 Typically rental car companies like their cars to be driven very delicately, so it was revolutionary to offer a street-legal race car for rent. The plan called for 1,000 Shelby Mustang GT350-H to be made for the Hertz rental fleet across the United States, almost all of which wore the distinctive black paint scheme with gold stripes and accents.

The cars proved hugely popular and they had the added effect of helping Mustang sales – people might not have been able to afford a Shelby but they could afford to rent a GT350-H for the weekend, and they could often afford a less extreme Ford Mustang from a local dealer.

Stories abound about what people who rented themselves a GT350-H actually got up to. Vehicle maintenance crews at Hertz reported multiple instances of finding evidence that roll cages had been welded in and then removed before the car was returned, it’s also been reported that some Mustang owners would rent a GT350-H and then do an engine swap for the weekend, allowing them to use the more powerful Shelby-tuned V8.

At the end of 1966 the cars were slowly sold into private hands, funnily enough no one really wanted them. They were seen as ex-rental cars that had almost certainly been driven hard by people who didn’t know what they were doing – not an ideal feature when looking at used performance cars. 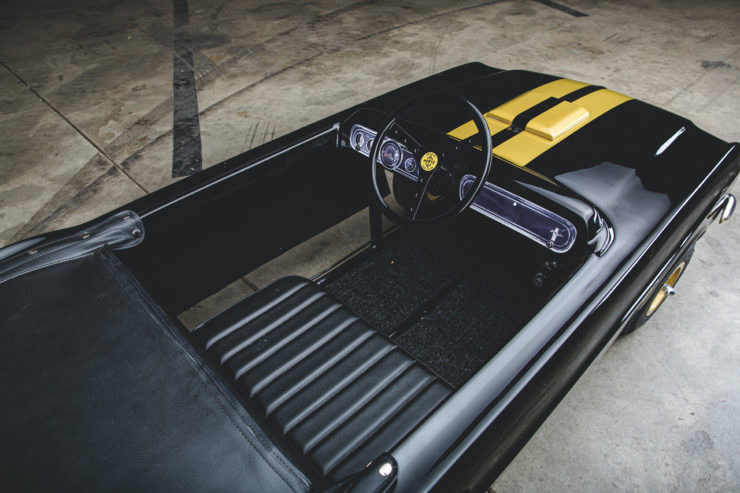 In the decades that have passed since, the original Shelby GT350-H cars have become hot collectors items and now frequently sell for more than the non-Hertz GT350 model of the same year. Many Mustang owners have also created clones by painting their cars with the distinctive black and gold livery and bolting on the correct wheels.

The car you see here is also a clone of sorts, it’s a gas-powered children’s car called the Mustang JR, it was developed by the Powercar Company of a Mystic, Connecticut. This one has been modified to look like a GT350-H, albeit without a roof. The engine appears to be either a 25cc or 50cc air-cooled, single-cylinder motor. It’s mounted in the rear and powers the rear right tire via a chain drive – the car also has a small battery with an electric starter.

The pint-sized passenger compartment has a black vinyl seat, a centrally-mounted steering wheel with Hertz branding, a stick on faux dashboard, and presumably an accelerator and brake pedal in the foot well.

RM Sotheby’s is due to offer the Shelby GT350 H Junior in mid-January with no reserve price, if you’d like to read more about it or register to bid you can click here. 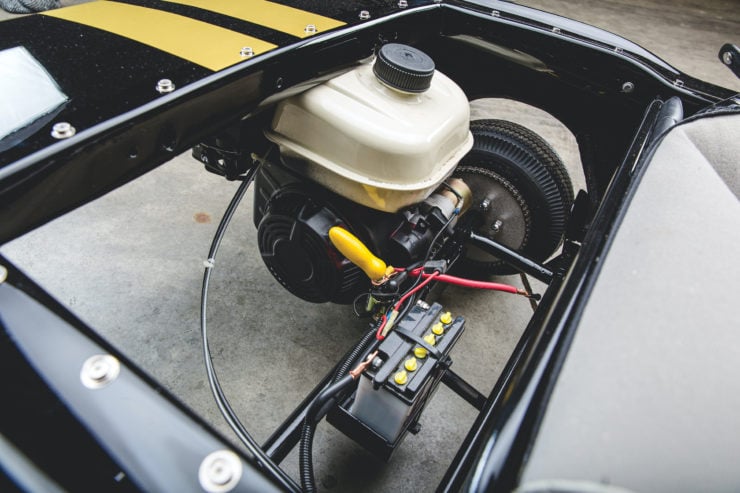 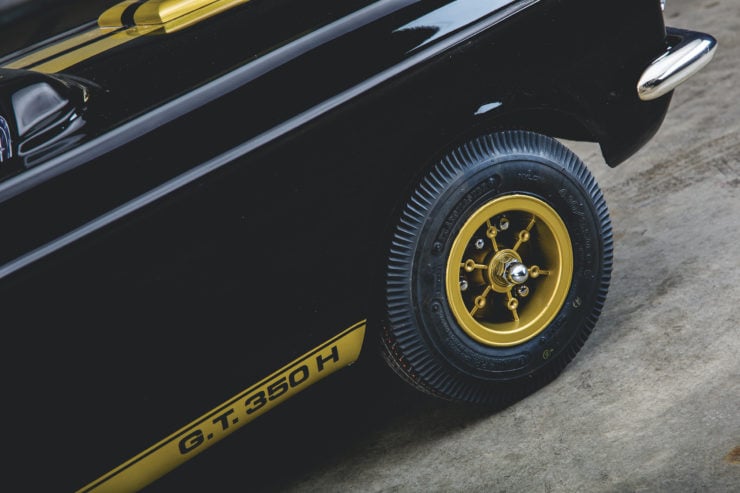 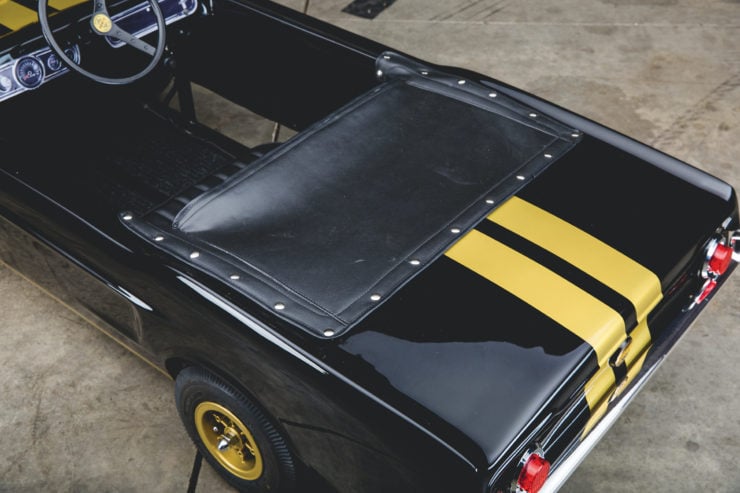 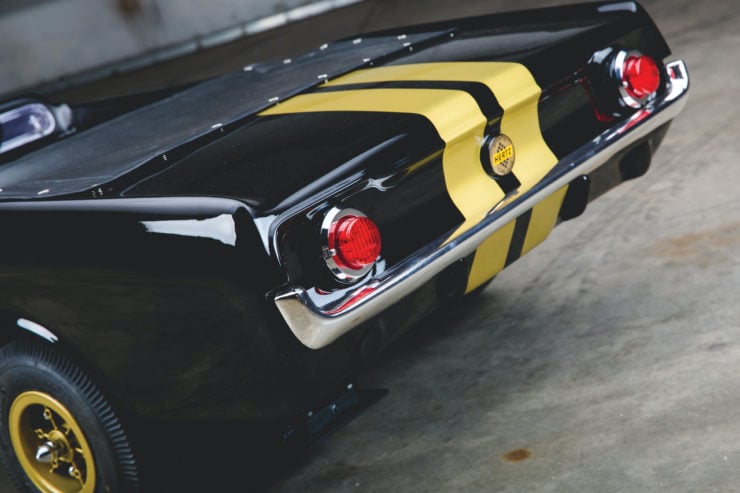 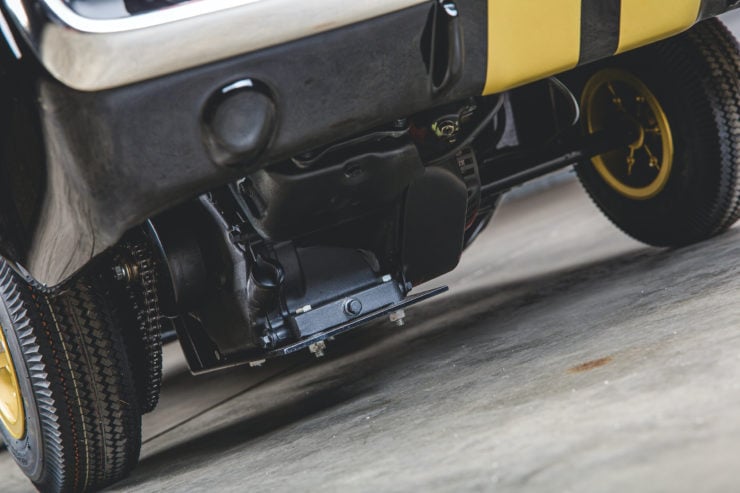 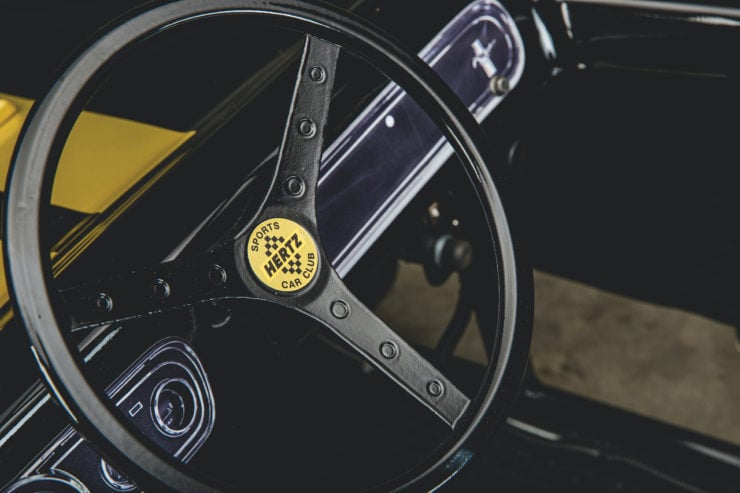 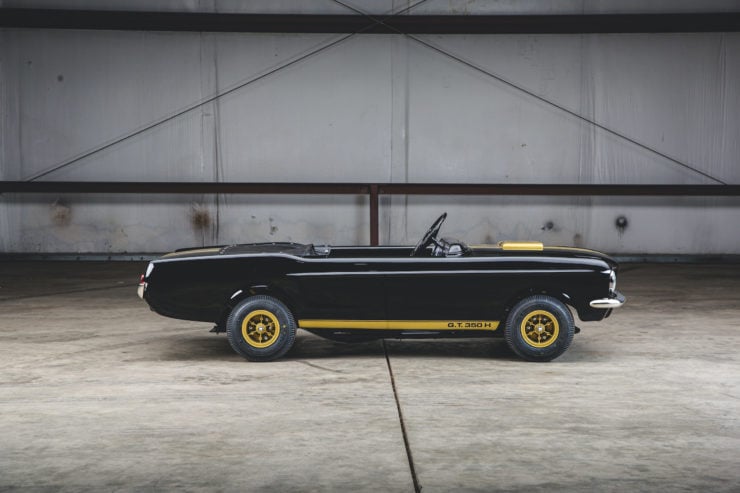 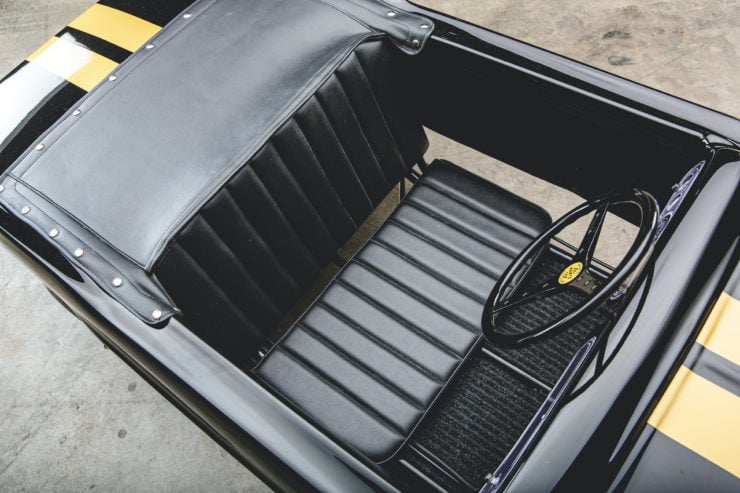 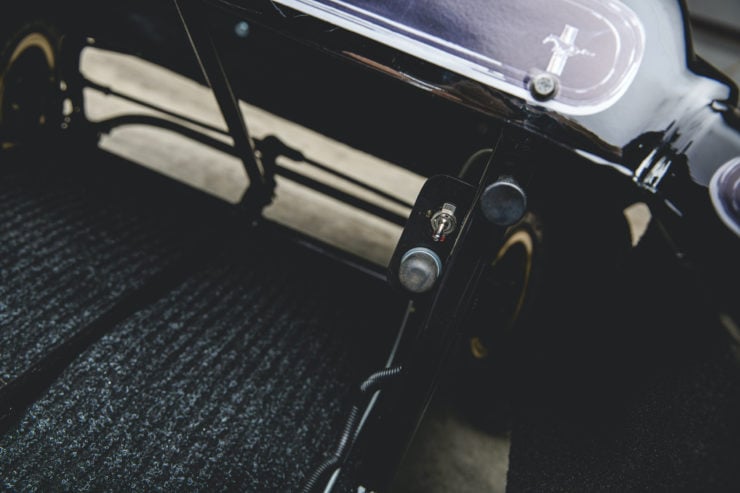 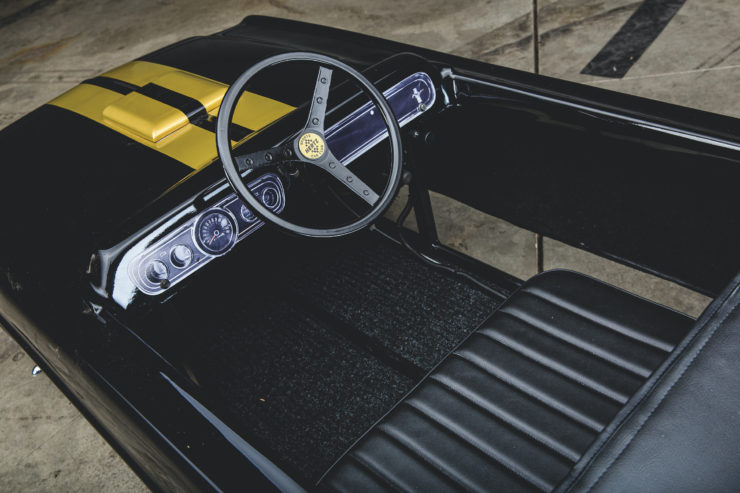 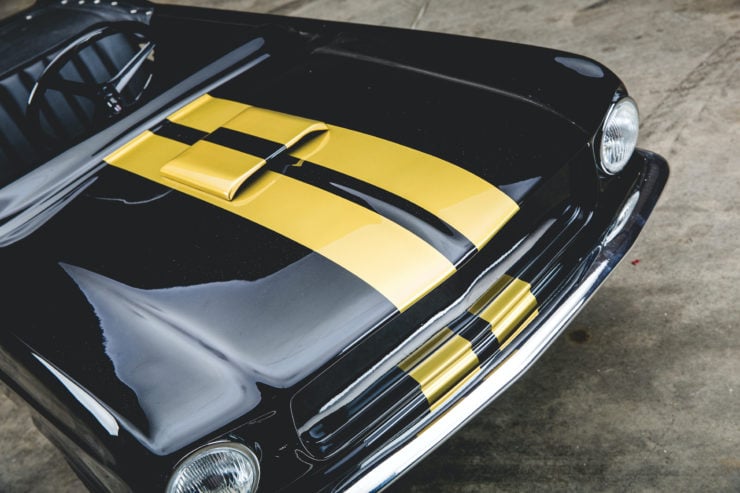 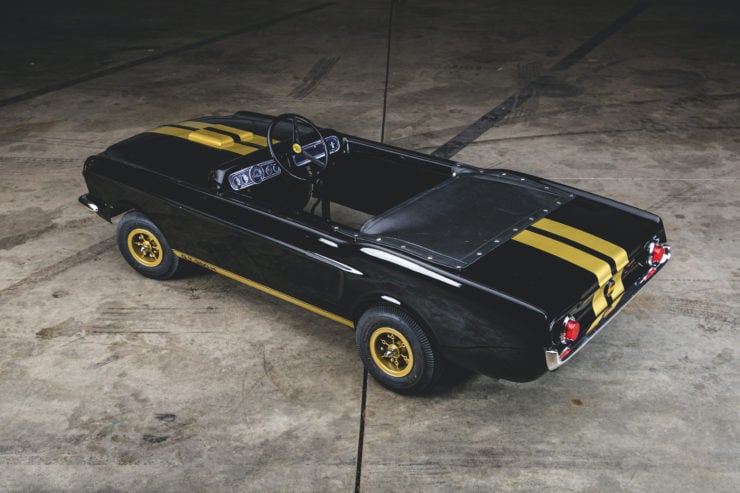 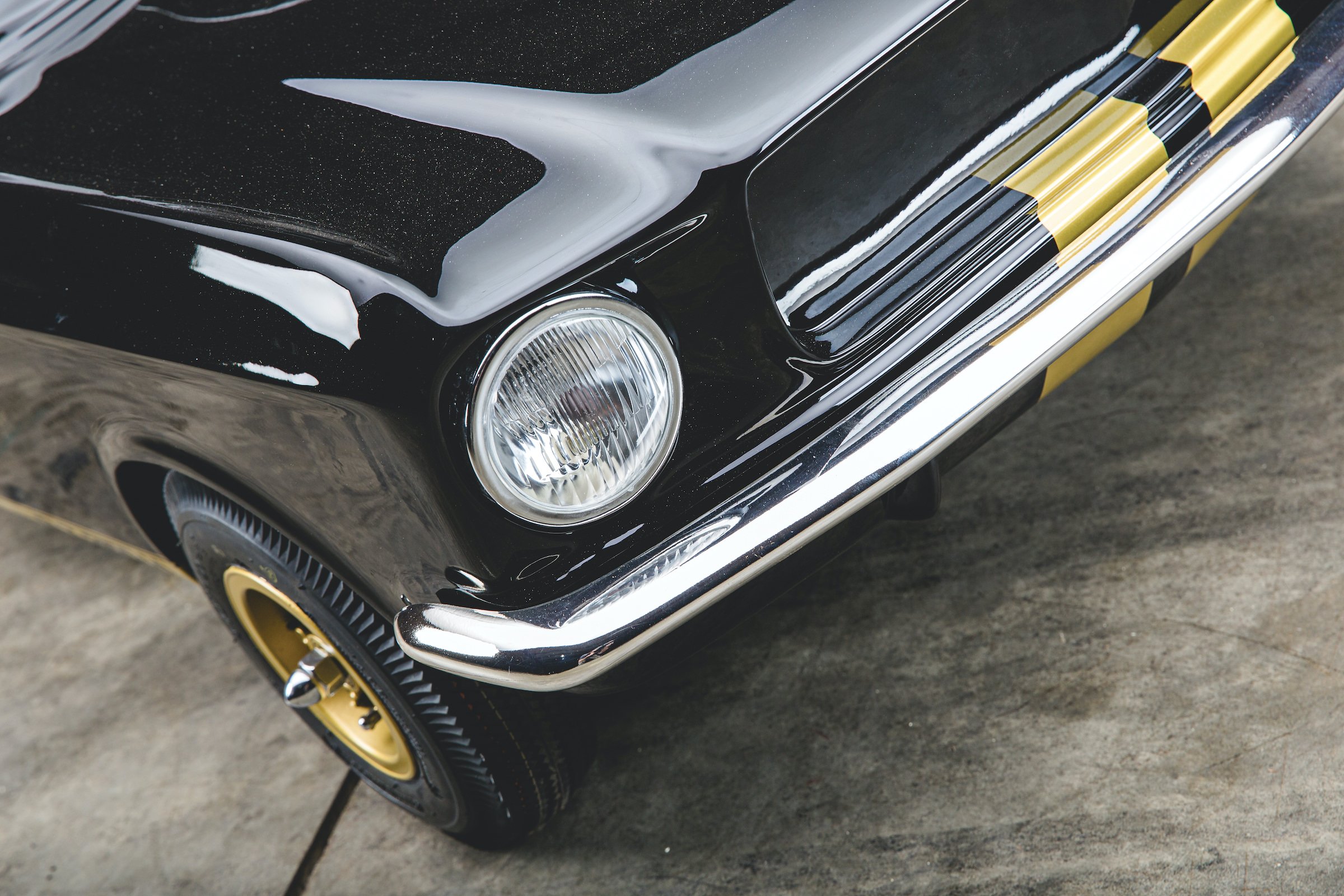