The story of the Red Pig is one of those automotive legends that deserves its own feature film, for those unfamiliar with the story it goes something like this:

In 1969 a small local automotive tuning company in Germany called “AMG” got their hands on a Mercedes-Benz 300SEL 6.3 – a large sedan popular with non-benevolent middle eastern dictators. For reasons still unknown they decided to turn the car into a racer, the engine was enlarged to 6.8 litres and power at the rear wheels was boosted to 420.

The Red Pig was then entered into the 1971 24 Hours of Spa where it took a second place over all – stunning the field who had laughed the Mercedes out of Parc Ferme the day before. The torque produced by the engine was such that the team had to replace tires repeatedly during the race, as well as top up fuel which was being consumed at a rate slightly higher than 1mpg. In the years after its retirement from racing the Spa Red Pig was sold to French company Matra who used it to test jet fighter tires and landing gear.

This print by World Shut Your Mouth shows the best angle of the Red Pig, it measures 24″ x 18″ and it’s individually silkscreened by Kansas City’s La Cucaracha Press on a heavy French Paper stock. The run is limited to 50 distributed prints and each will be signed and numbered. 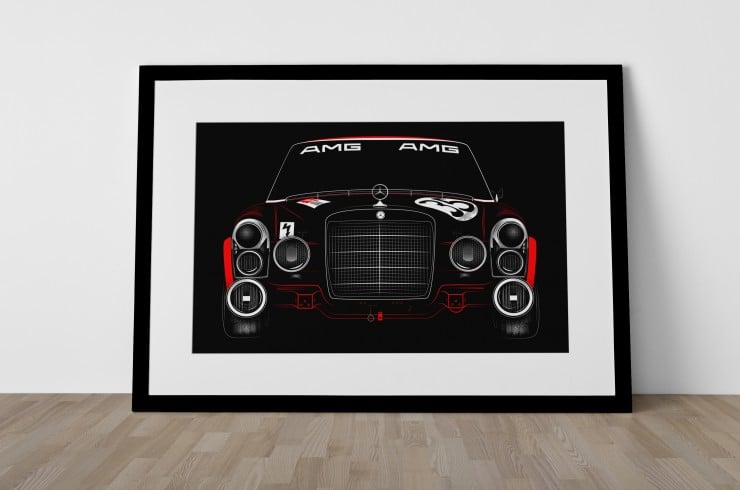