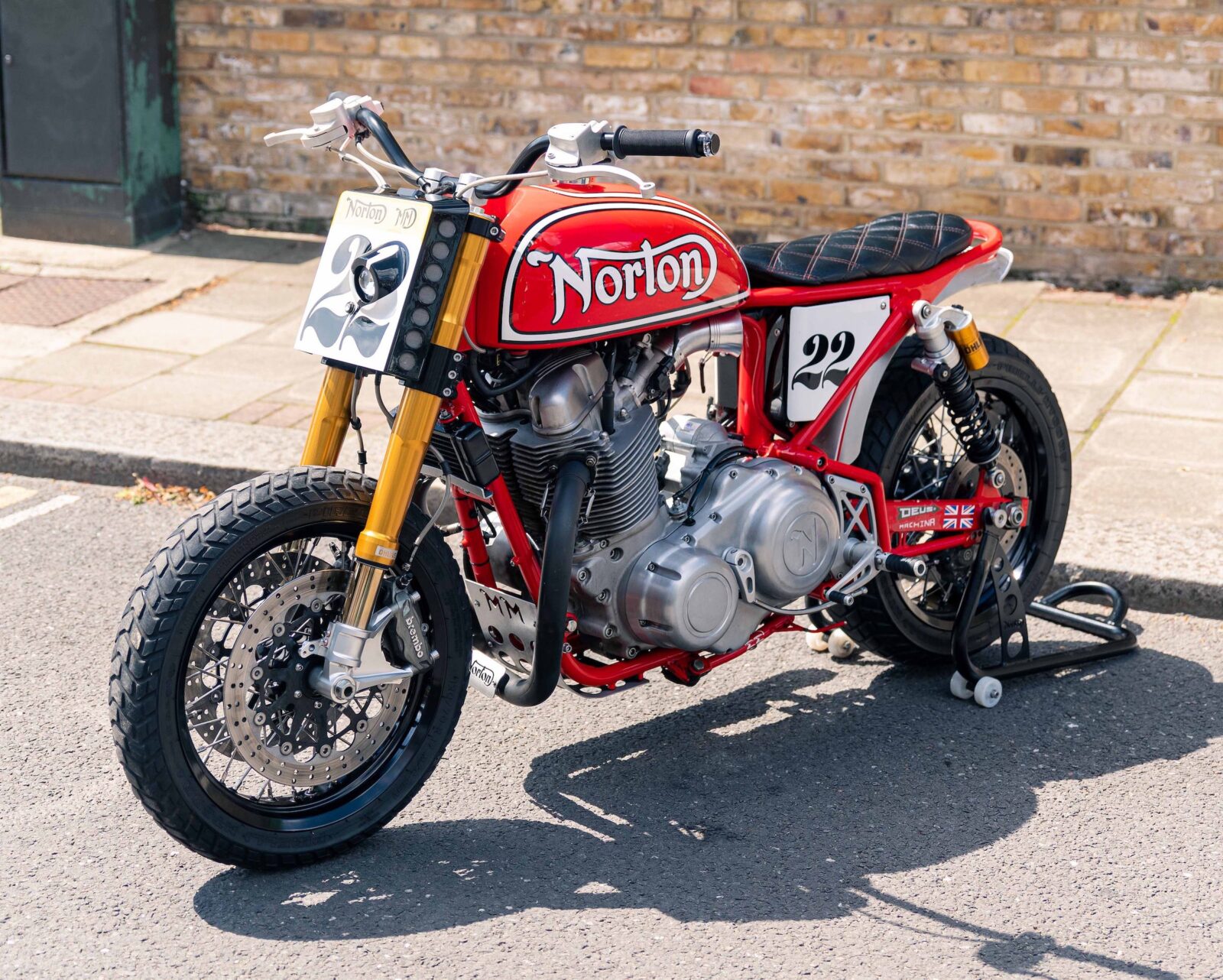 Just five examples of the Norton 961 MM Flat Track were built starting in 2017 by 72 Motorcycles in England. If the styling looks somewhat familiar it may be because a hearty dose of design inspiration was taken from the legendary Ron Wood “Big Tube” Norton flat trackers, a custom racer that won the AMA Ascot Park Half-Mile National event three years in a row in the early 1970s.

The Norton Commando 961 is a far more recent creation, it was developed when the company was in the hands of American ownership under Kenny Dreeer, with strong design links to the original Norton Commando of the ’60s and ’70s. When Norton was bought by British owners in 2006 and production returned to England the 961 formed the backbone of the company. The 961 is still in production now in updated form with Norton’s new owners TVS, and they’re rapidly spooling up to get the company into a position to challenge companies like Triumph and Ducati.

The Norton MM is far more than a mild custom motorcycle with a few bolt on parts and a paint job – this was a ground up reimagining of the platform and it includes a completely new frame design based somewhat on the architecture of the Ron Wood originals.

This new frame has a thick spine that double as the oil reservoir, with a twin down tube duplex and a box section swing arm in the rear. If you’re thinking that that all sounds like a job for a serious engineer you’d be right, 72 Motorcycles co-founder Jamie Ireson is a design engineer with years of experience working on everything from power stations to Formula 1 components – the first step in the build of the new Norton MM was comprehensive CAD design work for all new parts including the chassis.

Jamie and fellow co-founder Merry Michau, a celebrated motoring photographer, first struck upon the idea of building the Norton MM when visiting the Norton factory and chatting to the previous company CEO Stuart Garner. He loved the idea for the new bike and gave them a deal on a freshly built Norton Dominator, which would form the basis of the first prototype.

The air-cooled parallel-twin used in the 961 is an entirely new design with strong influence from the final 850 Commando twin from the 1970s. It has a capacity of 961cc, a compression ratio of 10.1:1, two push-rod actuated valves per cylinder and a total power output of 80 hp and 65 ft lbs of torque. 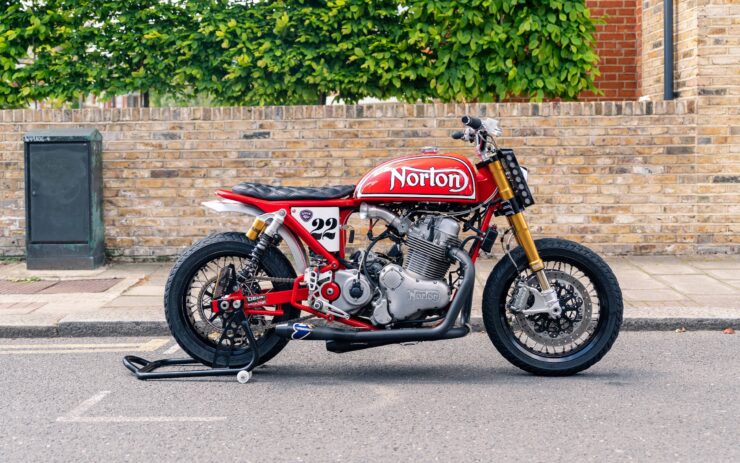 Above Image: The Norton MM features a combination of new and retro styling cues that have given the rare semi-production motorcycle strong appeal on both sides of the Atlantic.

The Norton MM benefits from the fitment of fully-adjustable Öhlins suspension front and back, with braking provided by two four-piston calipers on floating rotors up front and a single piston Brembo disc in the rear. A new fuel tank was hand formed from alloy for the MM and paired with a slim seat reminiscent of the seats used on the original Norton flat trackers.

The most eye-catching feature on the MM is doubtless that bold red and white paint scheme featuring the oversized “Norton” logo first used on the Ron Wood bikes – the theory being that a bigger logo would be easier for spectators to see as the bikes flew around the track. It had originally been planned that 12 examples of the Norton MM would be built, however just five would be finished before production ended – making them a rare, factory-approved special build with significant curb appeal.

In recent years there have been well-publicized problems at Norton that culminated in external administrators shutting the company down in 2020, eventually selling it to TVS. This period of turmoil had a significant negative impact on the values of modern Nortons as people were concerned about parts and servicing availability. These concerns appear to have been addressed directly by TVS and current Norton CEO John Russell. Production of the Norton model range is now underway once again and much to the relief of the Norton faithful, the company looks to be on the best financial footing it’s had since the 1960s with spare parts sales and motorcycle servicing back in full swing.

We only see these Norton MMs come up for sale extremely rarely now, in fact I can only recall one other example being sold and that was a few years ago. The 2017 Norton MM you see here has just appeared for sale on Collecting Cars, at the time of writing there are six days left on the live bidding, with the current high big sitting at £6,000.

If you’d like to read more about this unusual Norton or register to bid you can click here to visit the listing. 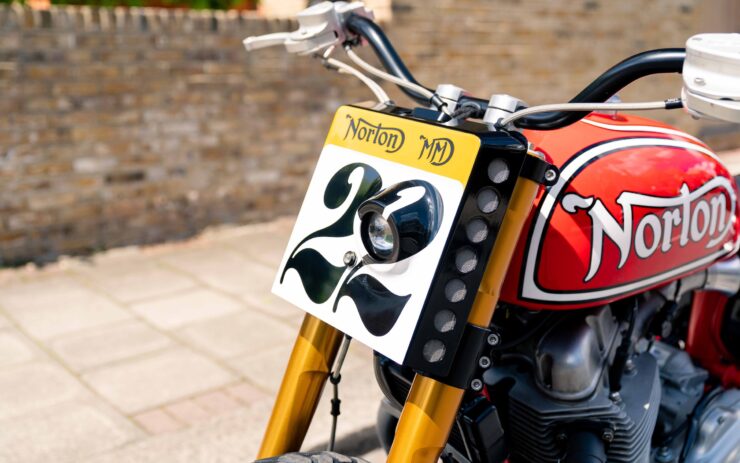 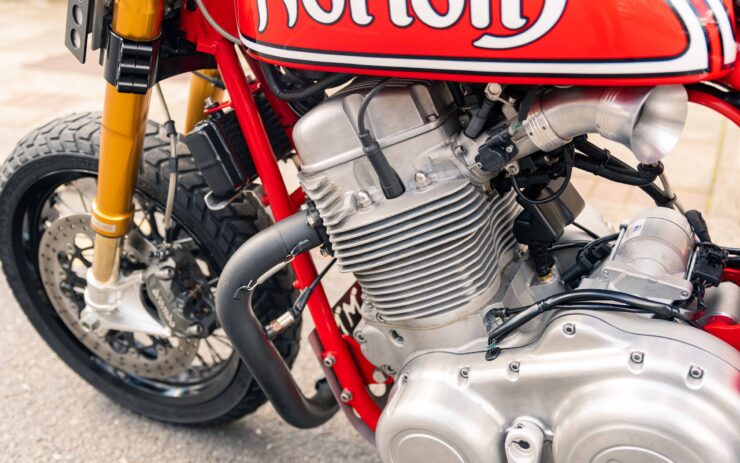 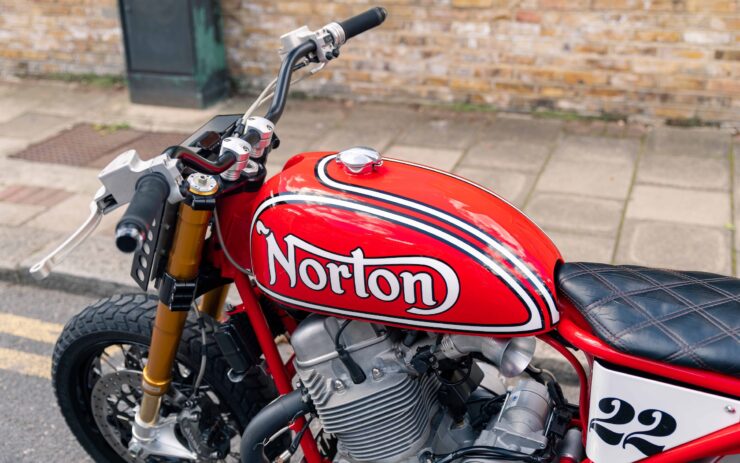 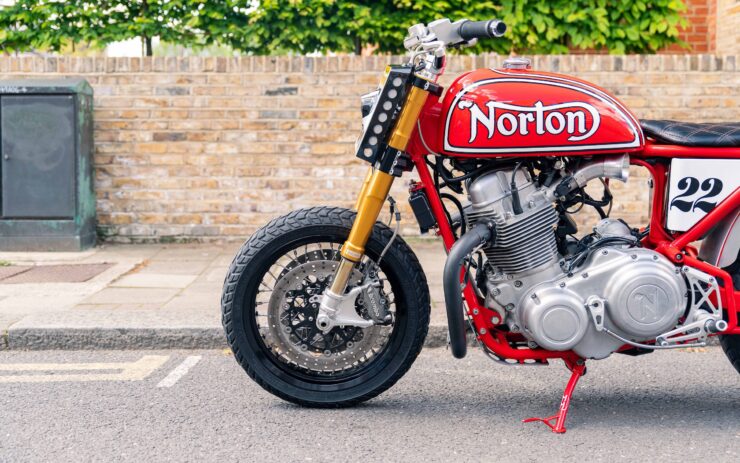 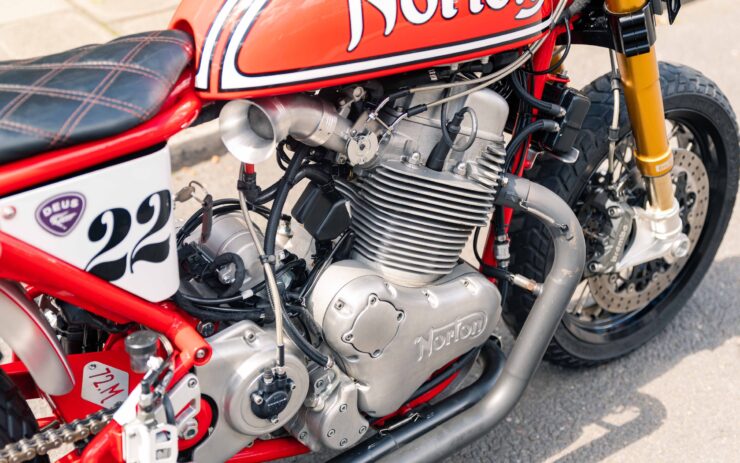 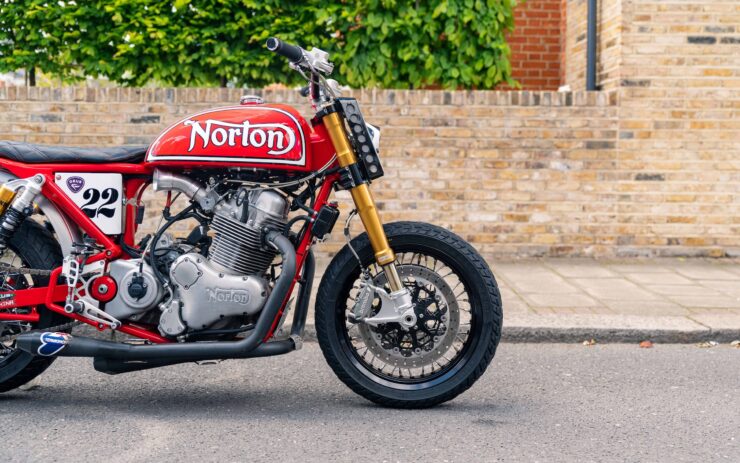 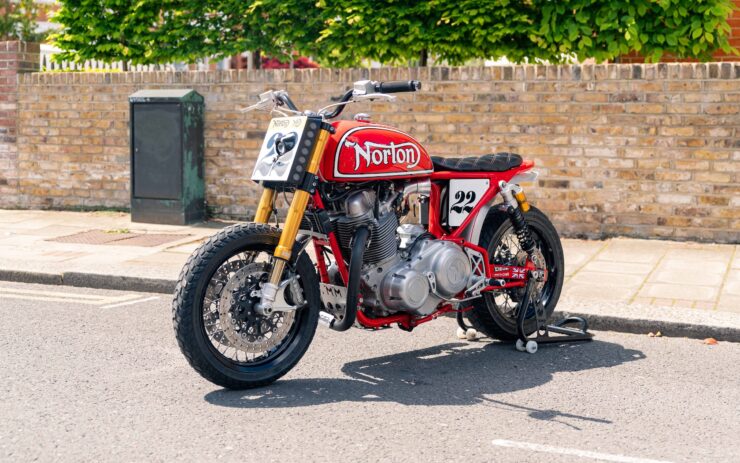 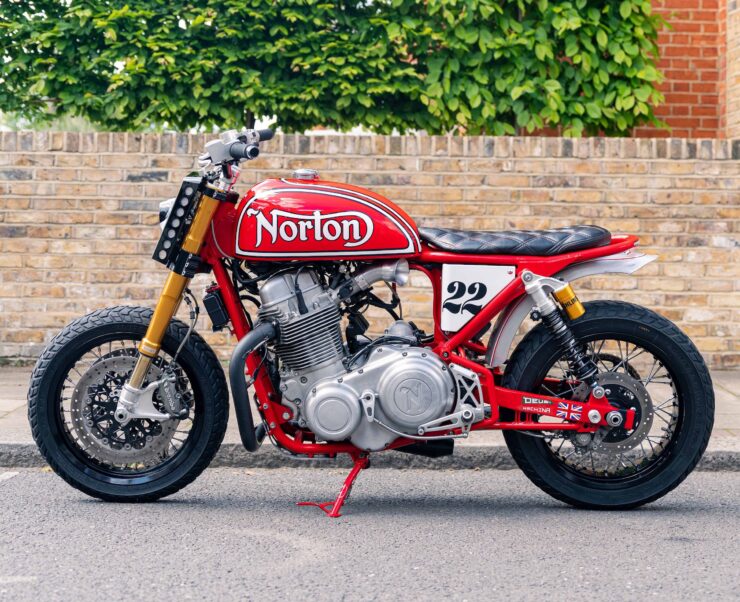 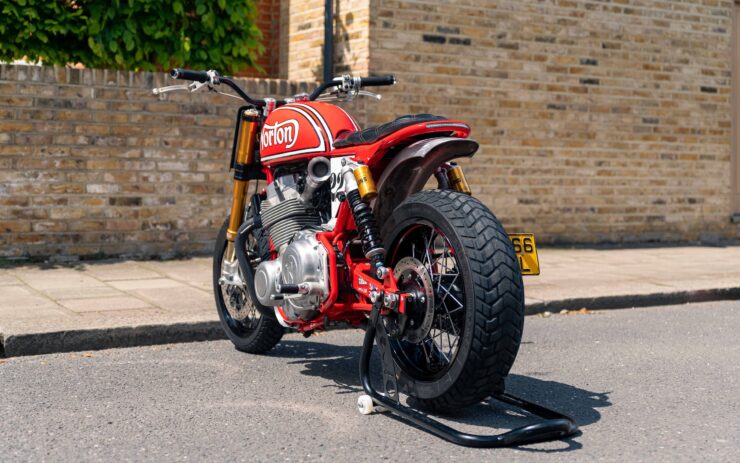 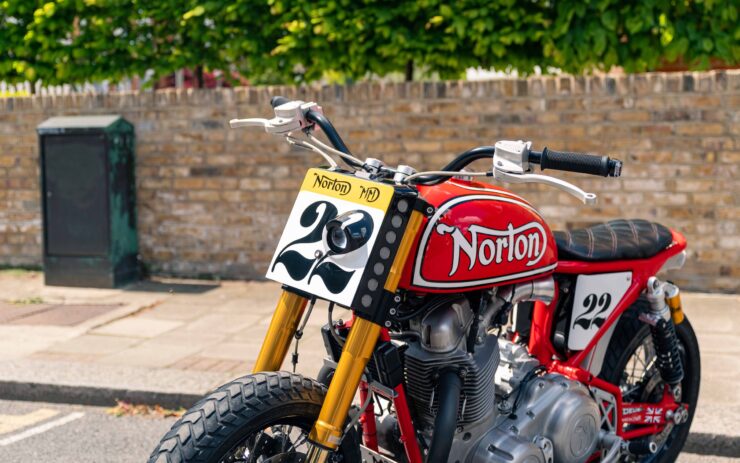 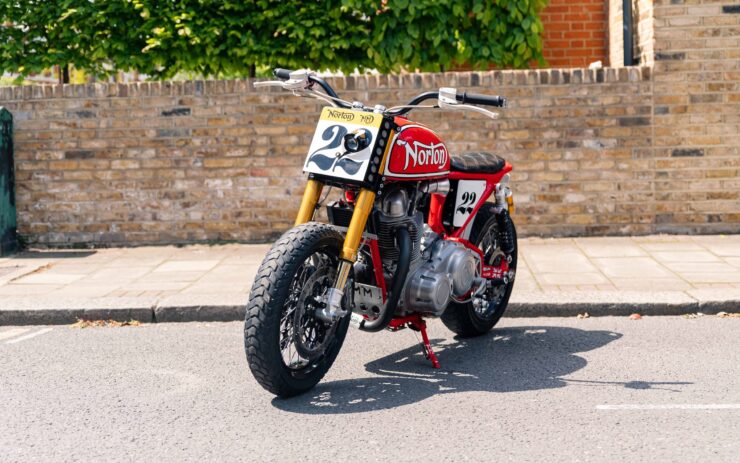 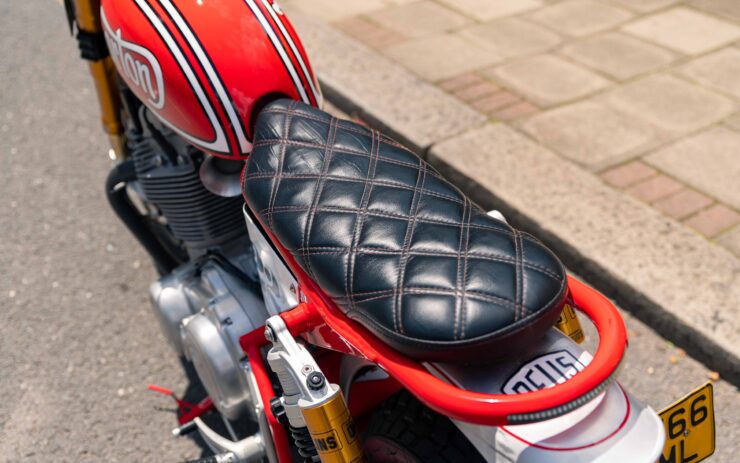 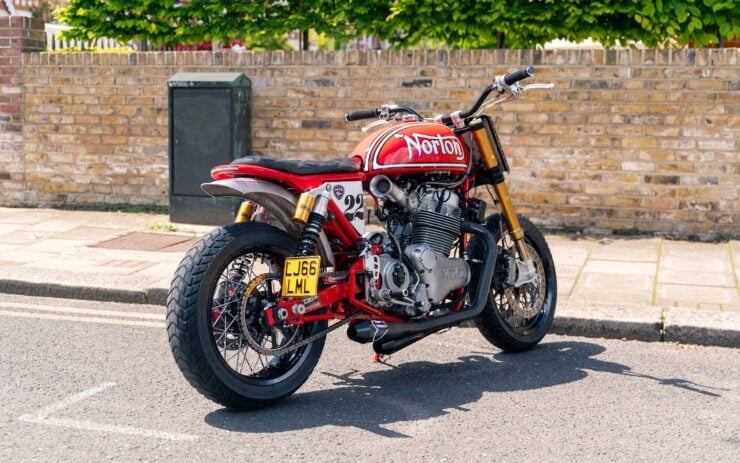 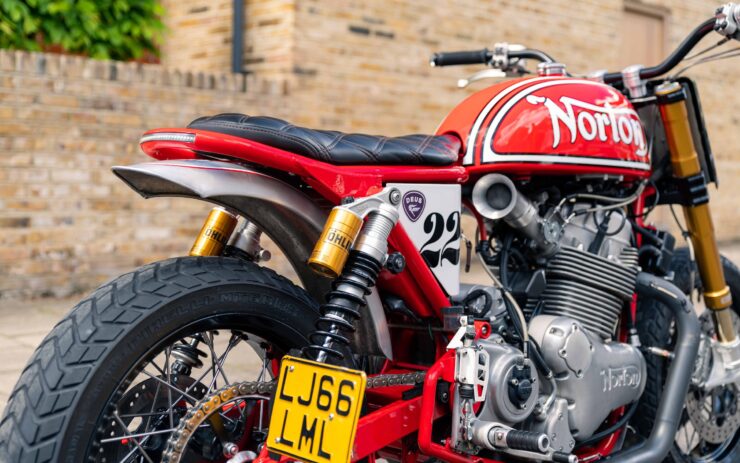