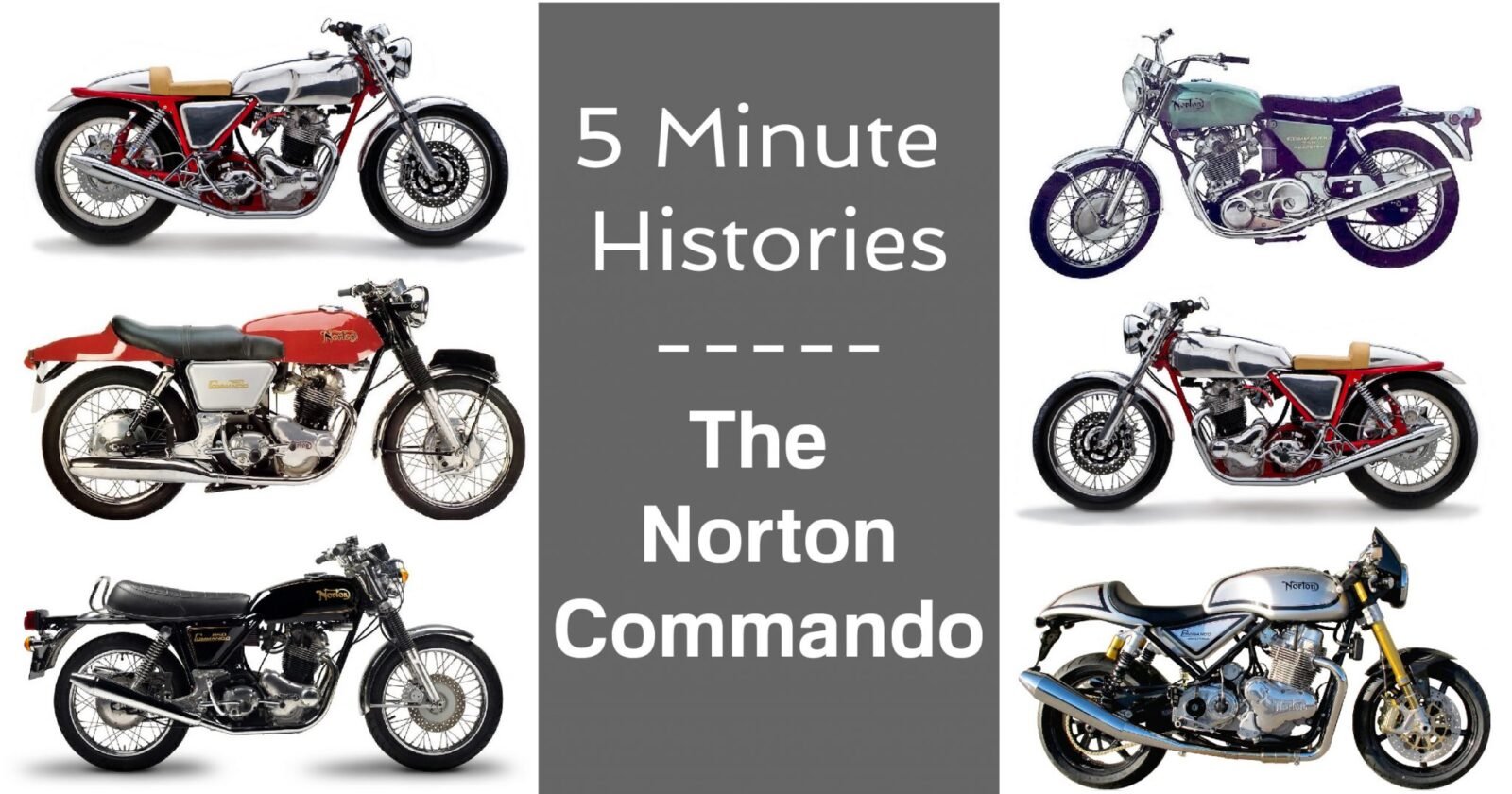 The Norton Commando is a vintage British motorcycle whose name would become so iconic it’s still a household name decades after the originals left production. Most people with even a passing interest in motorcycles will have heard of it. Given that the Norton Commando was created using a dated parallel twin engine and certainly suffered from its share of technical problems it is actually a bit curious that these motorcycles received such acclaim from the motorcycle press. In fact the Chairman of Norton, Dennis Poore, expressed surprise at how well these bikes seemed to do in the public eye. What was it about the Norton Commando that made it such a success? Those who own and ride these bikes regularly will tend to tell you that a Norton Commando has personality. Not only does it have personality but that personality can change from day to day. If you are looking for a motorcycle that you’ll have something of a relationship with then a Commando is pretty certain to deliver that.

Prior to the release of the Norton Commando in 1967, Norton’s most famous product was the Featherbed motorcycle frame, which was actually designed and made by Rex and Cromie McCandless from Belfast who were commissioned by Norton as independent consultants. The Featherbed frame provided a forgiving environment into which Norton fitted their parallel twin engine creating a bike with abundant power and near impeccable handling. That the engine design was ageing and really needed improvement is evidenced by the creation of the “Triton” by motorcycle performance enthusiasts wanting to create the best café racer money could buy. This involved getting hold of a Norton with a Featherbed frame, pulling out the old Norton engine and replacing it with a rather more advanced Triumph parallel twin. It still left you with a motorcycle with that road pounding personality that a parallel twin engine provides but packaged it all in a smoother motorcycle that was enormously enjoyable to ride. 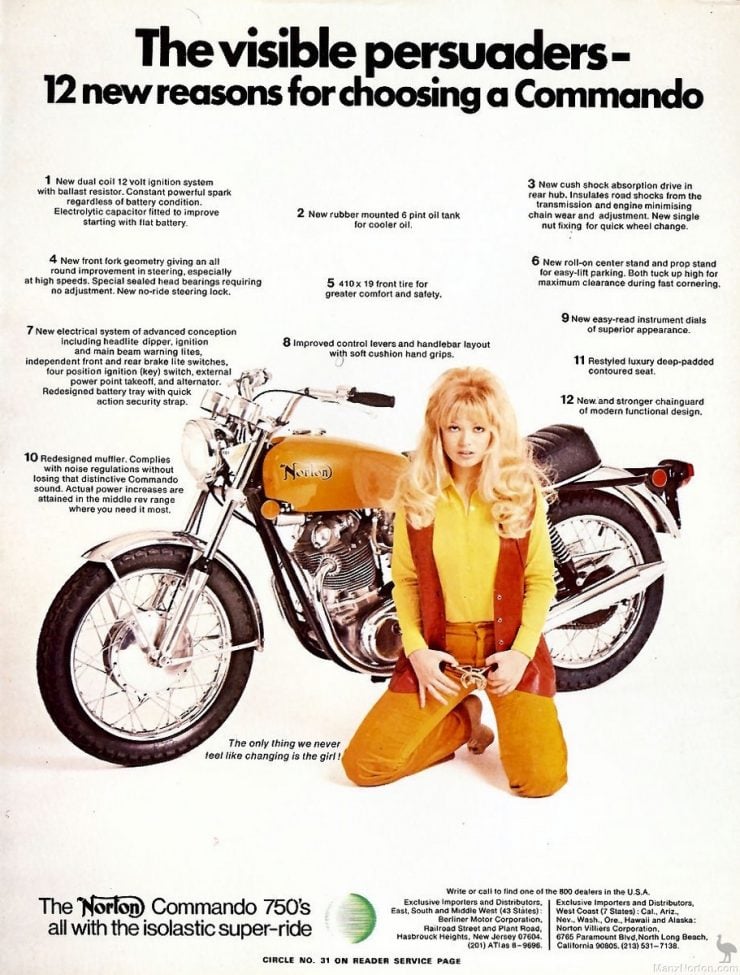 The Machine of the Year

For the creation of the Commando however Norton employed Dr. Stefan Bauer from Rolls-Royce to create a new frame to replace the much loved Featherbed. The frame he designed used a single 2.25” (57mm) top tube and it would become a frame that won design awards. The second major issue that needed to be solved was the engine vibration problem. As the engine grew from its original 1940’s 497cc up to the 745cc for the Commando so the vibration problem grew with it. The vibration from the engine was such that it would cause frame failure due to metal fatigue. Chief Engineer Bernard Hooper assisted by Bob Trigg came up with the solution to the problem which was to do something similar to what you would do in a motor car. The engine, gearbox and swing arm assembly were bolted together and then mounted in the frame by rubber mountings. This certainly ameliorated the vibration problem but required good maintenance. If the rubber mountings were too tight the engine vibrations were uncomfortable for the rider and would ultimately lead to frame cracking, but if they were too loose the engine was able to move in the frame causing handling problems.

Norton called this new mounting system the “Isolastic” system, interestingly perhaps a bit of a play on words taken from the British Motor Corporation’s “Hydrolastic” suspension system as used on the Mini, 1100, and 1800 cars of the sixties.

The Norton Commando made her debut at the London Earls Court Motorcycle Show in 1967 and went into production in 1968. Problems with the new frame became quickly apparent with cracks developing which led to the frame being strengthened and the problems were resolved for the 1969 model year. There were a litany of other teething problems with the Mark I Commando including problems with the early clutch being inadequate for the enlarged engine’s power, the engine main bearings tending to begin galling at high revs resulting in the engine being unceremoniously demolished in a spectacular oil smoke mess, the side stand was prone to breakage if the rider liked to kick start the bike on the side stand, and the engine vibrations caused the exhaust manifold to work loose causing damage to the cylinder head. Norton’s problems with the bike were not helped by the fact that different parts of the motorcycle were being produced in different parts of the country and transported to the main factory for final assembly. Notwithstanding the problems with the Commando it would win the coveted MCN “Machine of the Year” award for five consecutive years from 1968-1972. 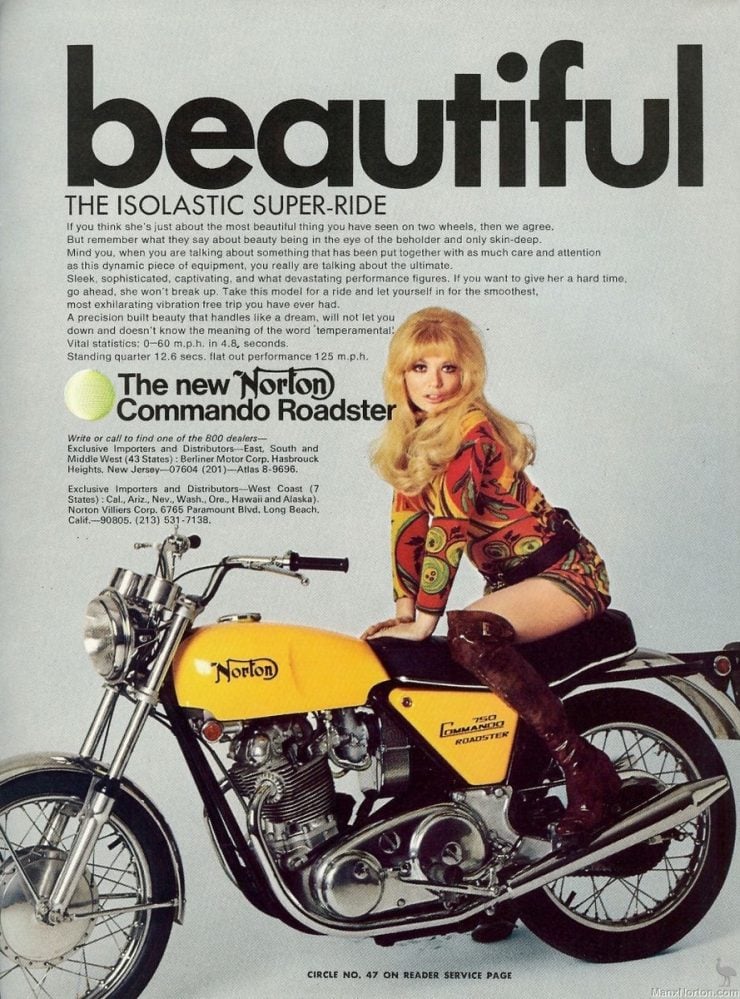 The Norton Commando was made in a number of different model variations. The first model was called the Fastback which was a sporty looking machine with a swept back rear cowling. It was followed by the S Type which had a 2.5 gallon fuel tank and high mounted exhaust pipes with heat shields. For the American market the R Type was created with a smaller 2.25 gallon fuel tank in the style of a street scrambler with high handlebars. In 1970 the SS Type was created. This model has high mounted exhausts on each side but was otherwise identical to the S Type. Also in 1970 came the Roadster which was like the S Type but with low mounted exhausts on either side. In 1971 came the Fastback LR or “Long Range” model which was made for two years. This model proved to be popular in the Australian export market where distances can be long and the fuel stations few and far between. The other notable 1971 model was the Hi-Rider for the American market with very high almost “Easy Rider” handlebars and a high back seat.

These were followed by the “Yellow Peril” production racer model that was very limited production. These bikes were assembled at the Norton Performance Shop in Thruxton and used the high performance Combat engine. It was the decision to begin using the Combat specification engine in regular production models in 1972 that was to prove to be a costly mistake for Norton. 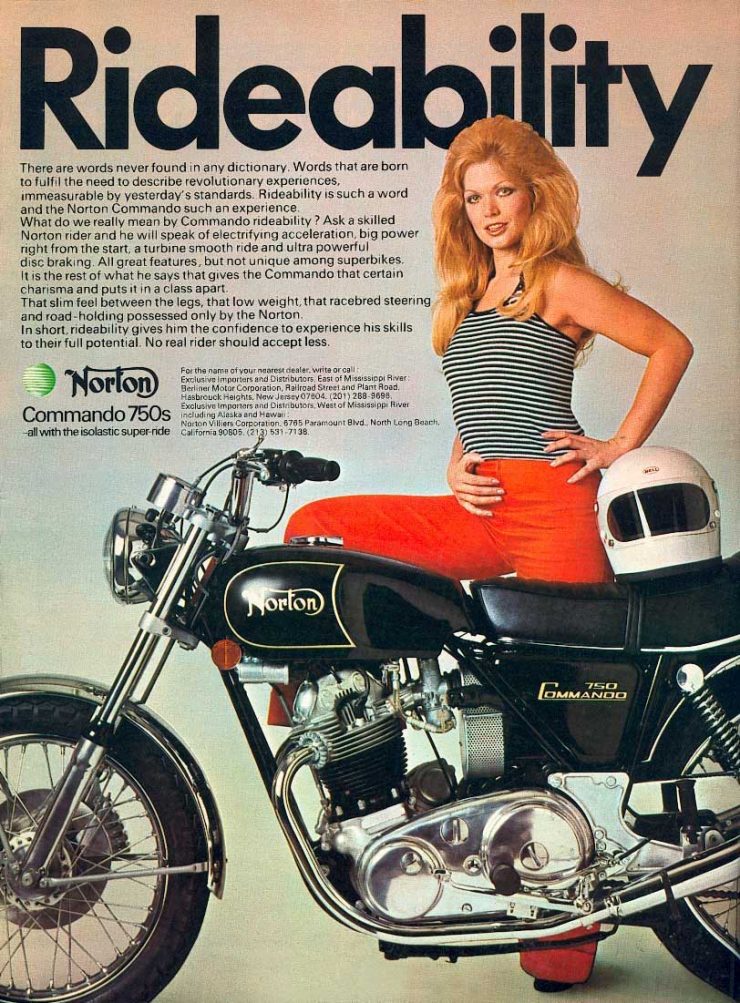 Norton’s established and respected name and the impressive sound and handling of the Norton Commando kept the bikes selling, new owners discovering problems progressively in their months and years of ownership. It would need a fairly spectacular production disaster to really get Norton buyers to sit up and take notice and that disaster came in 1972 in the form of the fitting of the aforementioned Combat high performance engine in the regular production motorcycles.

The Combat model’s engine had a 10:1 compression ratio and delivered 65bhp at 6500rpm. Main bearing failures became the feature this engine was infamous for. Taking an engine which already had a potential to start galling of the main bearings at high revs and increasing the stresses on that engine without a serious design change to mitigate the problem produced the disaster that caused both the British press and Norton to stop and take notice. For 1973 the main bearings of the engine were re-designed to solve the galling problem and the compression ratio reduced to 9.4:1. The engine’s reliability was much improved but significant damage had been done to Norton’s reputation.

From 1970 Norton worked on creating a motorcycle for police use and designer Neale Shilton created the Interpol fully kitted out with front fairing and saddle panniers for police use. This bike began life with the 745cc engine and was upgraded to the 828cc revised engine along with other Commando models in 1973.

In 1972 the Interstate model made its appearance and this along with the Interpol, the Hi-Rider and the Roadster were amongst the first models to be fitted with the larger 828cc Norton parallel twin in 1973. The Interstate was initially fitted with a 5.25 gallon fibreglass fuel tank but later models have a steel tank of 4.5 gallons.

In 1974-1975 the very limited production John Player Special was made with the 828cc engine. Only about 200 of these bikes were made but it is a model that has been greatly copied by owners of ordinary Norton Commandos buying accessory kits and creating their own replicas. There is no doubt that the number of replica bikes significantly exceeds the number of genuine John Player Specials. 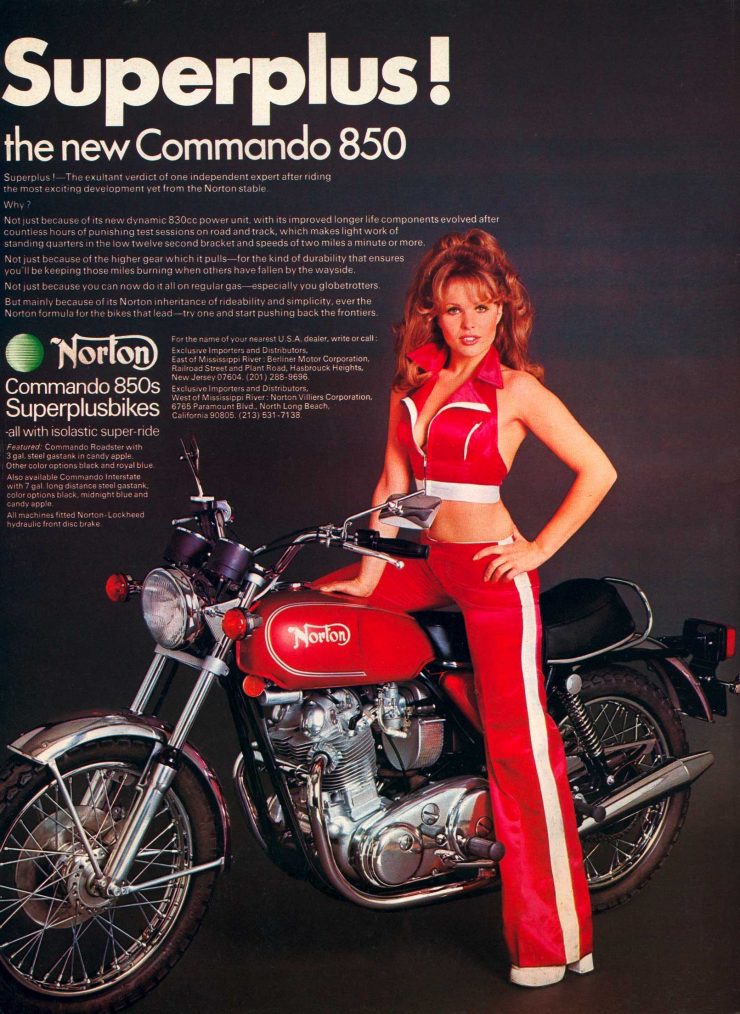 The End and a New Beginning

In addition to these production models there were a number of small scale custom Nortons created such as the Gus Kuhn Commando and the VR880 bikes from Kenny Drear of the United States. Likewise there are custom re-builders working to this day on the Commando such as Colorado Norton Works and NYC Norton.

Production of the Norton Commando continued for a just under a decade from the bike’s first public showing in 1967 until production finally ended in 1977. Norton as a company was to go through troubled times but they continued to work on creating superb motorcycles, the best that they could. By the late 1980’s Norton were even working on a Wankel rotary engine motorcycle that put together an engine with which vibrations were simply not a problem, an engine that could rev higher than pretty much anything else, and they put it in a frame with superb Norton handling. But it has been the Norton Commando that has been the survivor.

The Commando is the bike that has acquired almost a cult following and it is one of few British classic motorcycles from the café racer era for which you can still get brand new manufactured parts instead of being forced into the less reliable route of re-conditioned parts. Given that the Norton Commando was never a “perfect” motorcycle we might wonder why it has continued and prospered? The answer is, I think, that this is a bike with a soul, and it comes from the classic café racer era.

Norton mostly kept from the styling disasters that Triumph and BSA succumbed to and made classically styled motorcycles whose engines, for all their vibrations, announce their presence and soon draw a crowd of interested enthusiasts. Of all the classic parallel twin British bikes it’s the Norton Commando that has become a legend, perhaps moreso than any other.

As the 21st century gets underway the Norton badge has returned to production, with a newly designed Commando using a modern parallel twin with a capacity of 961cc. The new Norton headquarters is in Donnington in England, and it’s owned by successful British businessman Stuart Garner. The company its currently shipping 5-10 motorcycles a week and plans are in place to significantly increase production numbers with a strong focus on the North American market. 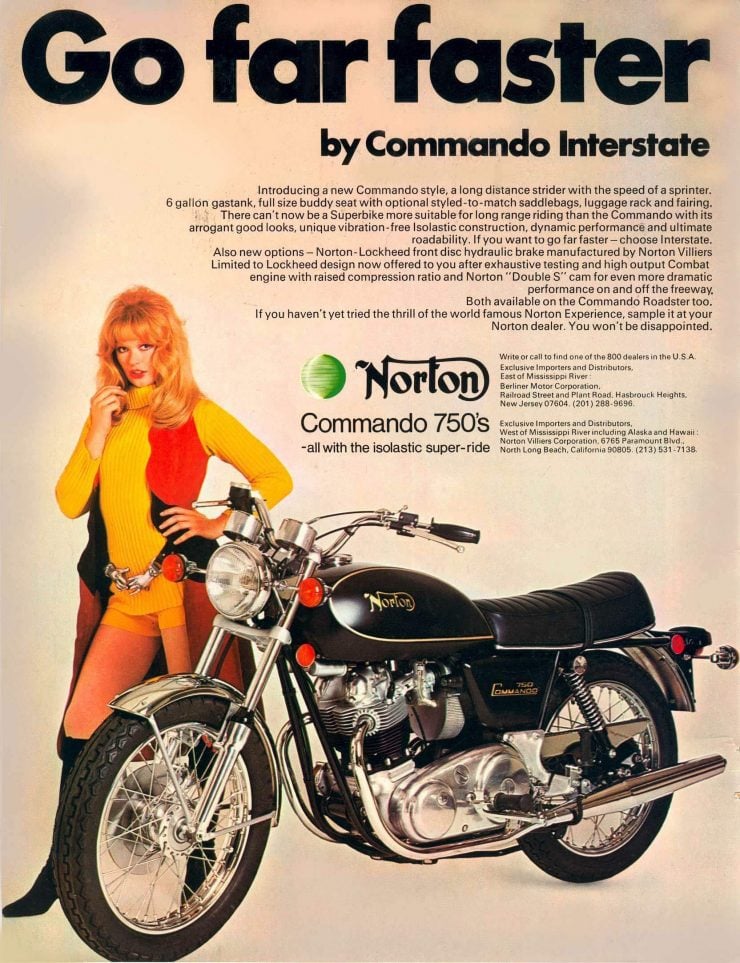 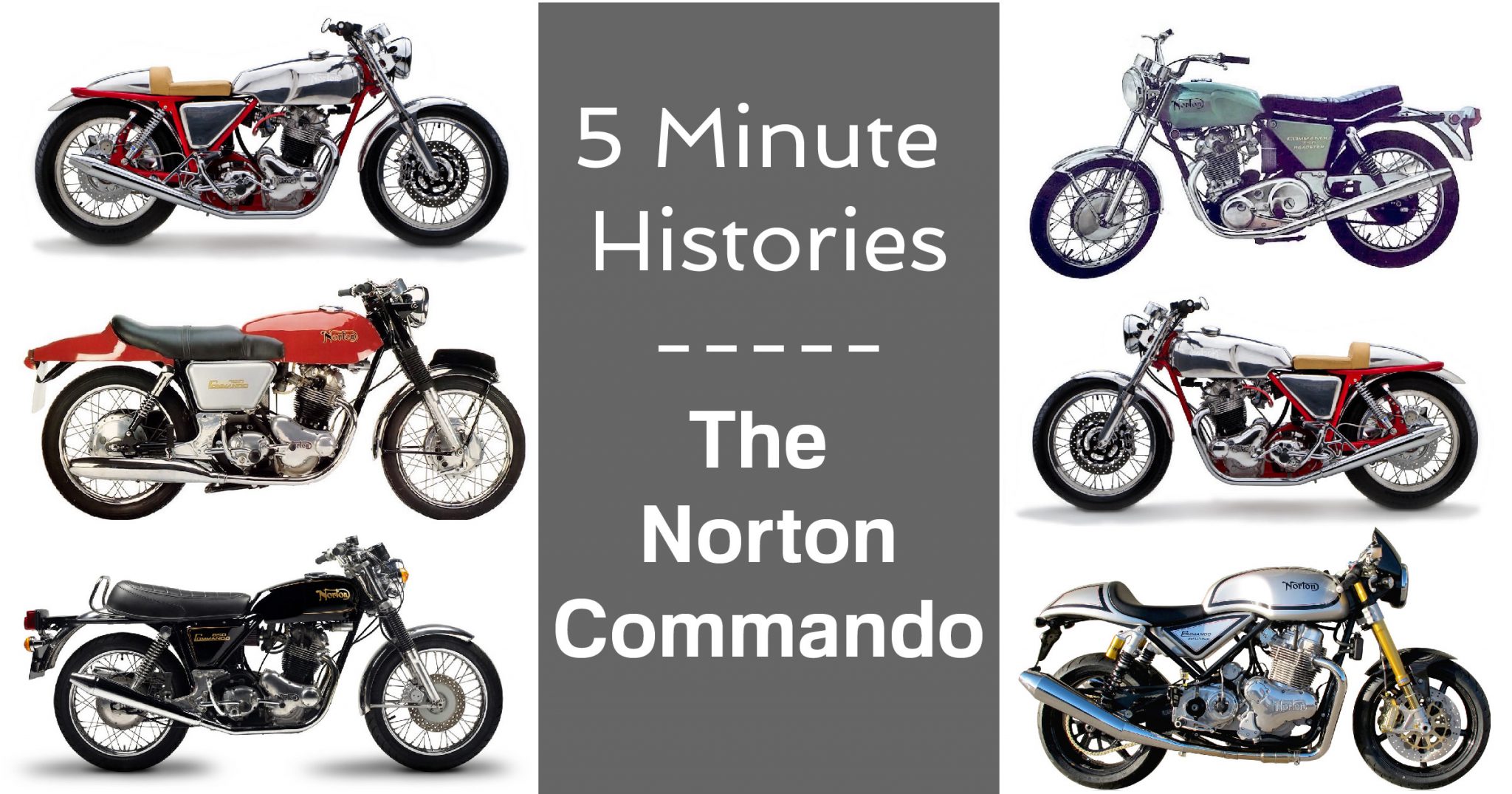