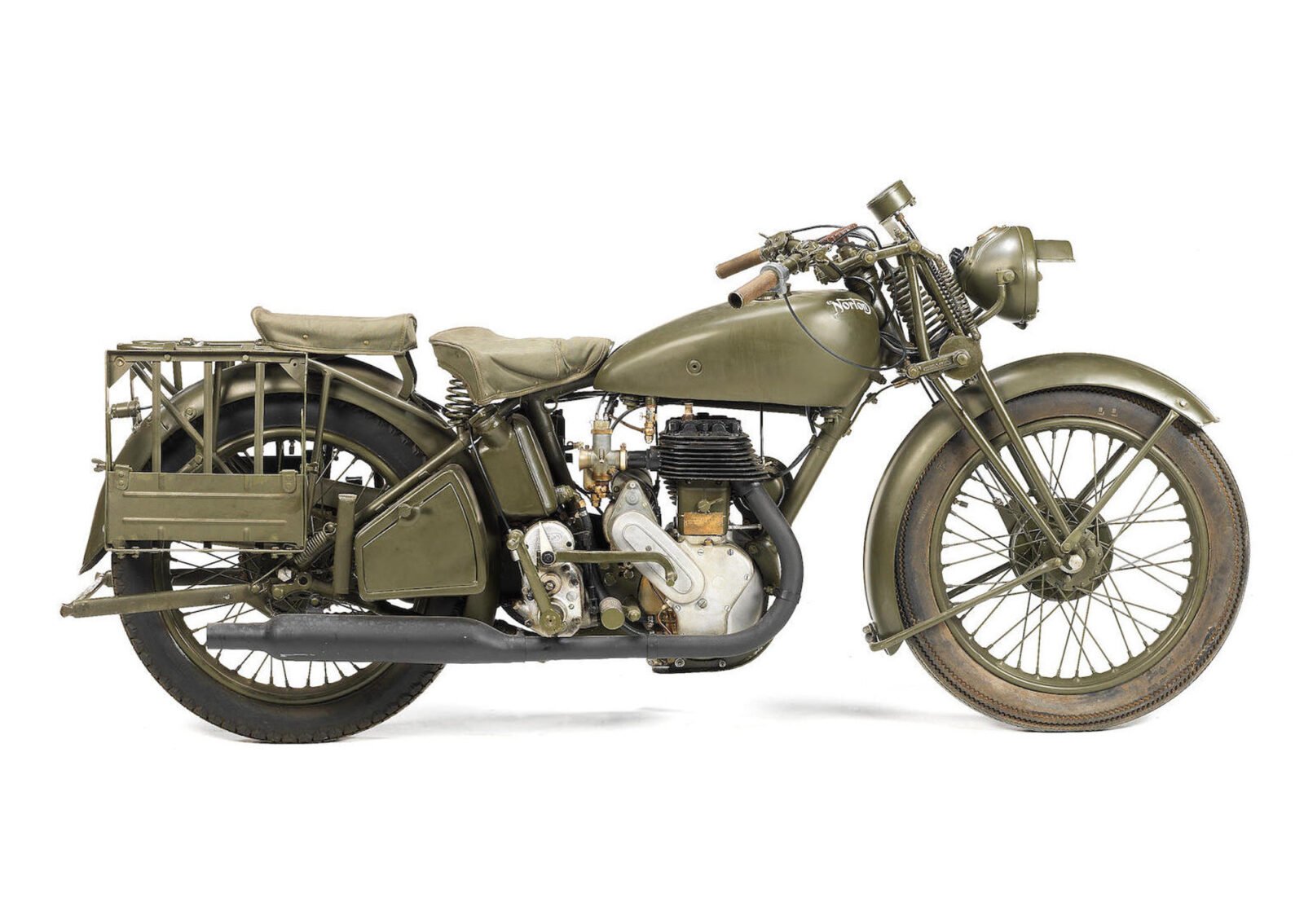 The Norton 16H – A Roaring Norton for the Roaring Twenties

The Norton Model 16H had its beginnings back even before the Roaring Twenties, and before the outbreak of the First World War. The 490cc single cylinder engine that would provide the power for the 16H was created by James Lansdowne Norton and installed in a motorcycle which he entered into the 1911 Isle of Man TT in the 500cc Senior Class. That engine had a bore and stroke of 79mm x 100mm, a dimension that was to remain the Norton standard for single cylinder engines up until 1963 when they were phased out.

James Norton had established his Norton Manufacturing Company in 1898 and had gone from making bicycle parts to manufacturing complete bicycles and then on to powered bikes beginning in 1902 with the “Energette” powered by a Belgian made 143cc Clément single cylinder engine. In 1907 a Norton was entered in the Isle of Man TT and won the twin cylinder class: and then in 1909 Norton created his own 633cc “Big Four” single cylinder side-valve engine. 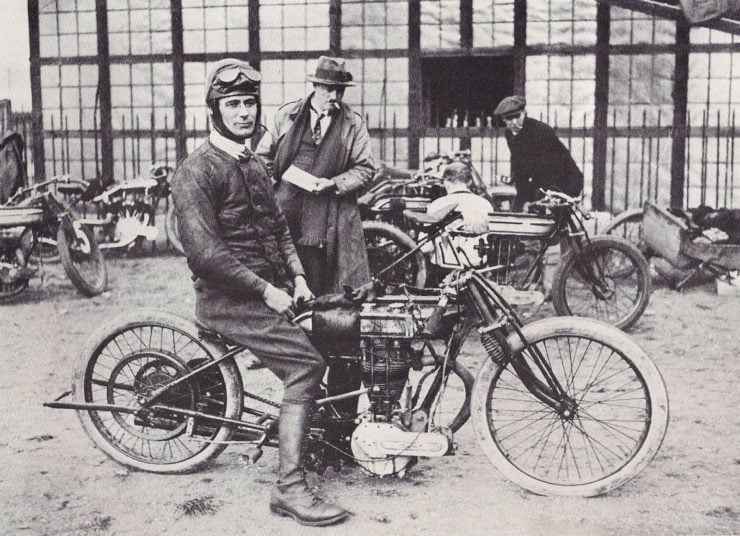 So when James Norton entered his belt driven Model 16 490cc single in the Isle of Man TT of 1911 he had some background as a motorcycle designer and maker, and some background in the Isle of Man TT. Norton did not gain a place in that race but having learned some things he went back to his workshop and improved his engine and then entered the 1912 Brooklands TT, which he won, and set three world records while he was at it. 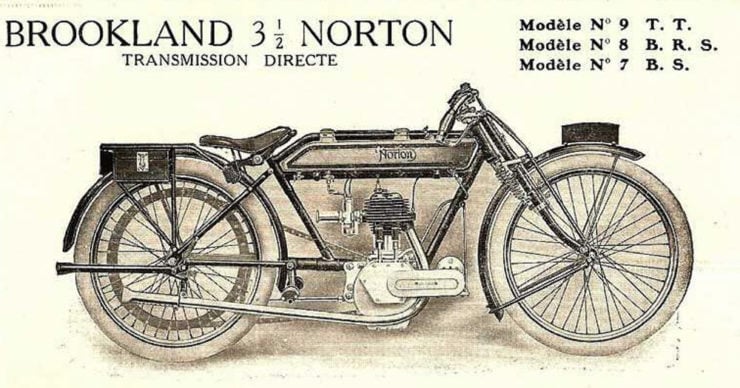 With the Brooklands success under his belt Norton got to work on creating motorcycles to sell to an eager public and by 1913 was selling his “Brooklands Special” (BS) which was capable of lapping the Brooklands circuit at 70mph, and “Brooklands Road Special” (BRS) which could lap Brooklands at 65mph: both bikes achieving this feat with a single speed gearbox and belt drive.

This success was to be short lived however with the outbreak of the Great War in 1914, a war that would later become known as “The First World War”.

With the Great War over in 1918 Norton went back into motorcycle production in 1919 producing an improved version of their pre-war 16H. This new model featured a three speed geabox by Sturmey-Archer combined with a chain drive. The following year in 1920 Norton entered the 1920s with a move to a new manufacturing premises in Birmingham’s Bracebridge Street.

In the 1920 Brooklands TT races a Norton machine ridden by Norton works rider Douggie Brown managed second place behind a Sunbeam, but more importantly more than half the riders in that event were riding Norton motorcycles: the name was well and truly established as a maker of fast and reliable motorcycles.

It was in 1921 that James Norton introduced his Model 16H, which had the 490cc side-valve single engine installed in a lower “Big Four” frame. This model was designated the 16H with the “H” standing for “Home” because it was intended for use on Britain’s road system which was quite good in most places by that time. A model using the same 490cc side-valve engine installed in an older model frame that provided higher ground clearance was designated the 17C, with the “C” standing for “Colonies”, and the bike being intended for use on the rough roads and tracks to be found in places like Africa and Australia.

Those 1921 models did not yet feature adjustable tappets and so if valve clearances needed to be adjusted it required the rather permanent use of a file to shorten the valve stem. This shortcoming was remedied in 1922 with adjustable tappets being fitted and also in 1922 James Norton introduced an overhead valve version of his 490cc single and installed that in a bike that would come to be called the Norton Model 18.

The Call to War

The Great Depression came in 1929-1930 and even as people were hoping for some joy and relief there emerged the twin specters of the rise of the Nazi Party in Germany in the early 1930s, and in Asia the shadow of a modernized and militaristic Japan which in 1932 invaded China and established its own government in the newly created territory of Manchukuo.

In Britain’s War Office clear heads could see that a war with Germany was going to be inevitable, and even while the government was telling the public to be hopeful for “peace in our time” the War Office quietly got busy with the job of arming Britain so that when what was deemed inevitable happened Britain would be equipped to repel the potential invader already flexing its muscles in Europe.

Given that by this time Norton had established an enviable reputation not only for performance but also for reliability they were contacted by the War Office with a view to them submitting a motorcycle model made to military specifications for the trials to choose a motorcycle for the expected war.

Wisely Norton did not choose to submit an overhead valve engine fitted bike, nor one of its newer models. Norton chose to build a modified version of their tried and proven 16H and submit that for evaluation. This modified WD16H (i.e. “War Department” 16H) was equipped with a higher frame to provide the 5¾ inch ground clearance required.

This was accomplished by using a shorter front down tube and shorter saddle tube. (These dimensions being the way to distinguish the military frames from the civilian ones). These bikes had the reliable 490cc side-valve single cylinder engine and were fitted with heavy duty front girder forks fitted with strengthened rebound springs (the main springs remained the same as on the pre-war civilian model), steel trials type foot-pegs, a carrier, sports tires, speedometer, electric horn, and a long propstand. It was of course painted in army drab olive green. 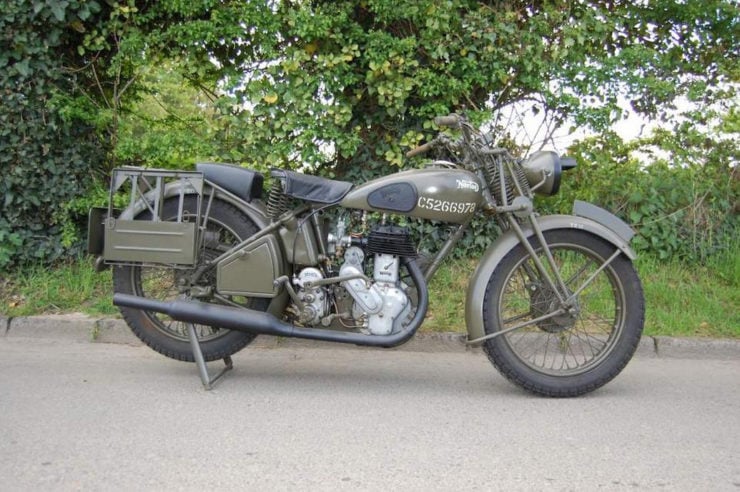 At that time the British military had been using a 500cc BSA “V” twin cylinder motorcycle which had been originally purchased as a replacement for the Douglas and Triumph motorcycles used in the First World War, but these BSA twins had been found lacking.

In all, eight manufacturers submitted motorcycles for the trials including Matchless, Triumph and Enfield among others and the War Office found all the motorcycles tested to be superior to the BSA “V” twins they had. But the Norton 16H stood out as the best of them all and so it was the motorcycle the military wanted and in 1936 Norton were awarded a Directorate of Army Contracts order for 300 bikes built to the army specification along with spare engines and frames.

Norton built these 300 bikes between February and mid-March of that year demonstrating their manufacturing ability. They were then awarded two more contracts so that by the end of 1936 they had produced 900 16H type motorcycles for the military. Triumph were also awarded contracts with Norton being ultimately responsible for making about a quarter of Britain’s wartime motorcycles, in the order of 80,000 to 100,000 units. 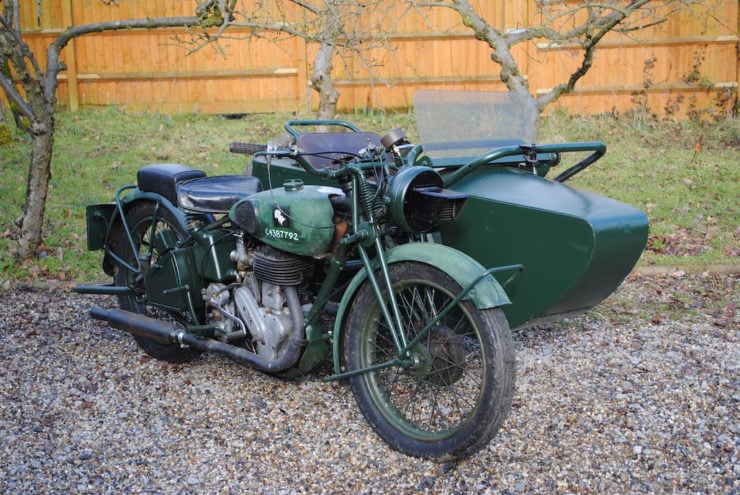 By the end of 1936 Britain’s re-armament was well underway and shipyards were laying down warships, aircraft were being built, and all the other materials of war were being methodically acquired.

Norton were presented with an order for 2,000 more bikes in 1937 and also with the order to do some improvement work on their design, and the bikes already in military service. This included the fitting of a compensated voltage system for the Lucas electrics, which was not difficult to do when the bikes were routinely serviced. 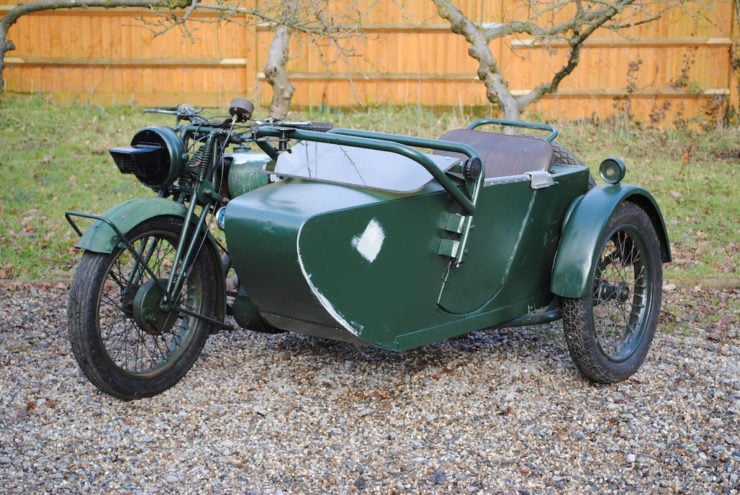 In 1938 Norton received an additional order for 500 16H motorcycles for the India Office fitted with improved air-cleaners for the dusty environments they were to be used in. Of these 50 were for the Nizam’s forces. 16H bikes were also ordered for the High Commissioner for South Africa and other colonial authorities and some of these orders were for the later 1938 model engine with enclosed valve gear, and so were different to the WD16H ordered by the British military.

By 1940 Norton were producing 400 WD16H motorcycles per week and had withdrawn from racing for the duration. The members of the racing team took their place on the production line to help keep up the production numbers, which rose to 500 per week during the war. 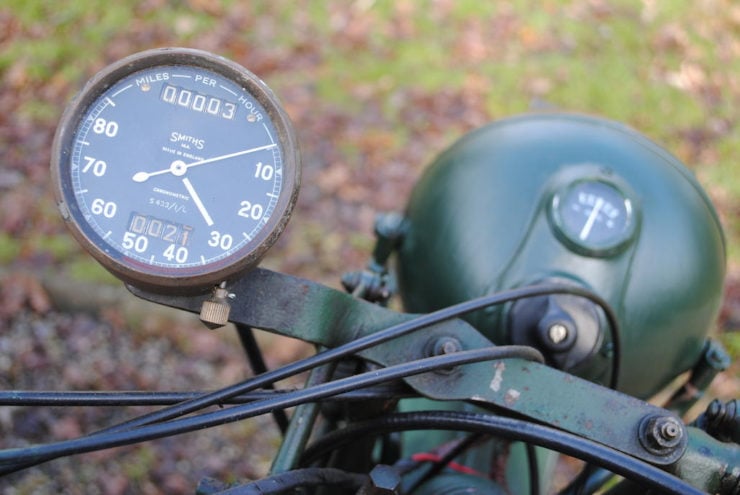 These Norton WD16H motorcycles weighed 388 lb (176 kg) dry and had a 3.5 gallon (16 liter) fuel tank. Brakes were drums front and rear. The top speed was listed at 68mph (109km/hr) and the gearbox was four speed with a chain final drive.

By the end of the Second World War a great many of the approximately 100,000 Norton WD16H bikes had survived and found themselves being sold off as military surplus. Many of these bikes were sold to foreign military buyers from such countries as Holland, Belgium, Denmark, Greece and Norway. Others were sold to civilian commercial dealers who would “civilianize” them so many of the original WD16H bikes were given new paint jobs and things like the military black-out lights were changed for conventional civilian ones. 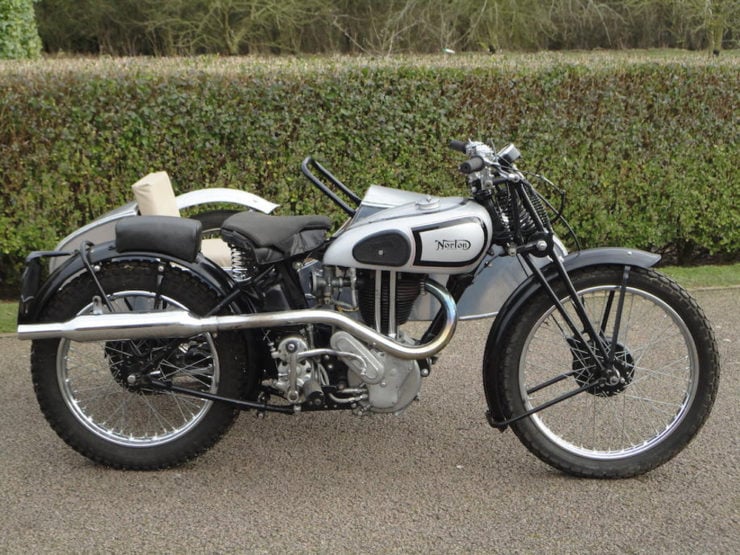 Despite the large numbers of military surplus bikes on the market there was still a strong demand for Norton to reintroduce the 16H civilian model which they did as soon as they could after the war’s end.

In 1947 the 16H was modernized by the fitting of telescopic front forks and remained in production until 1954 when it was phased out in favor of Norton’s twin cylinder motorcycles. That original 490cc engine would continue in production through until 1963. 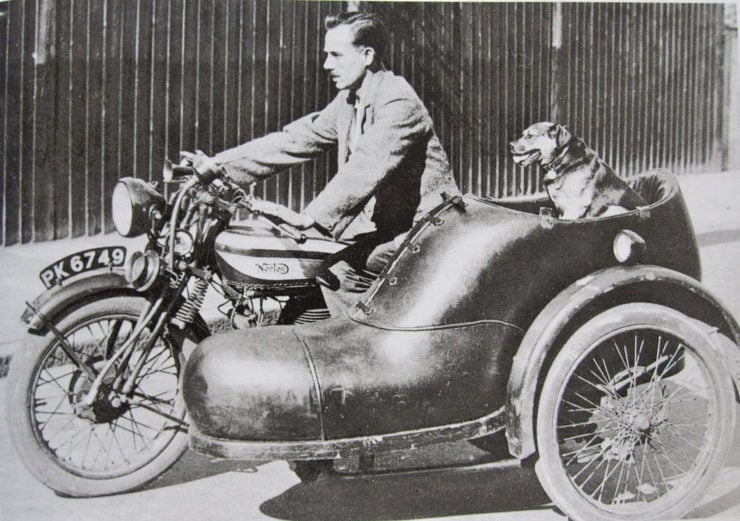 The Norton 16H earned itself a reputation for being near unbreakable: these bikes would keep on going even when their gearbox had been almost torn loose by riders who were pulling out all the stops to go just as quickly as they could. The 16H was built to be absolutely dependable, and to last for a long time.

Although they were nicknamed “The poor man’s Norton” they have a dedicated following of owners who appreciate them as being something like a “Land Rover” of motorcycles, albeit able to go much more quickly than a post war Land Rover.

If you happen to be one of those happy Norton 16H enthusiasts you might want to visit Rob van den Brink’s website which has manuals and other detailed information available for download. 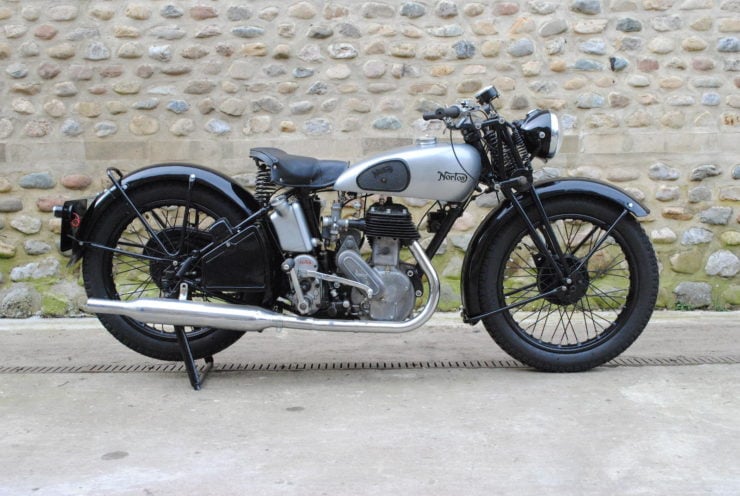 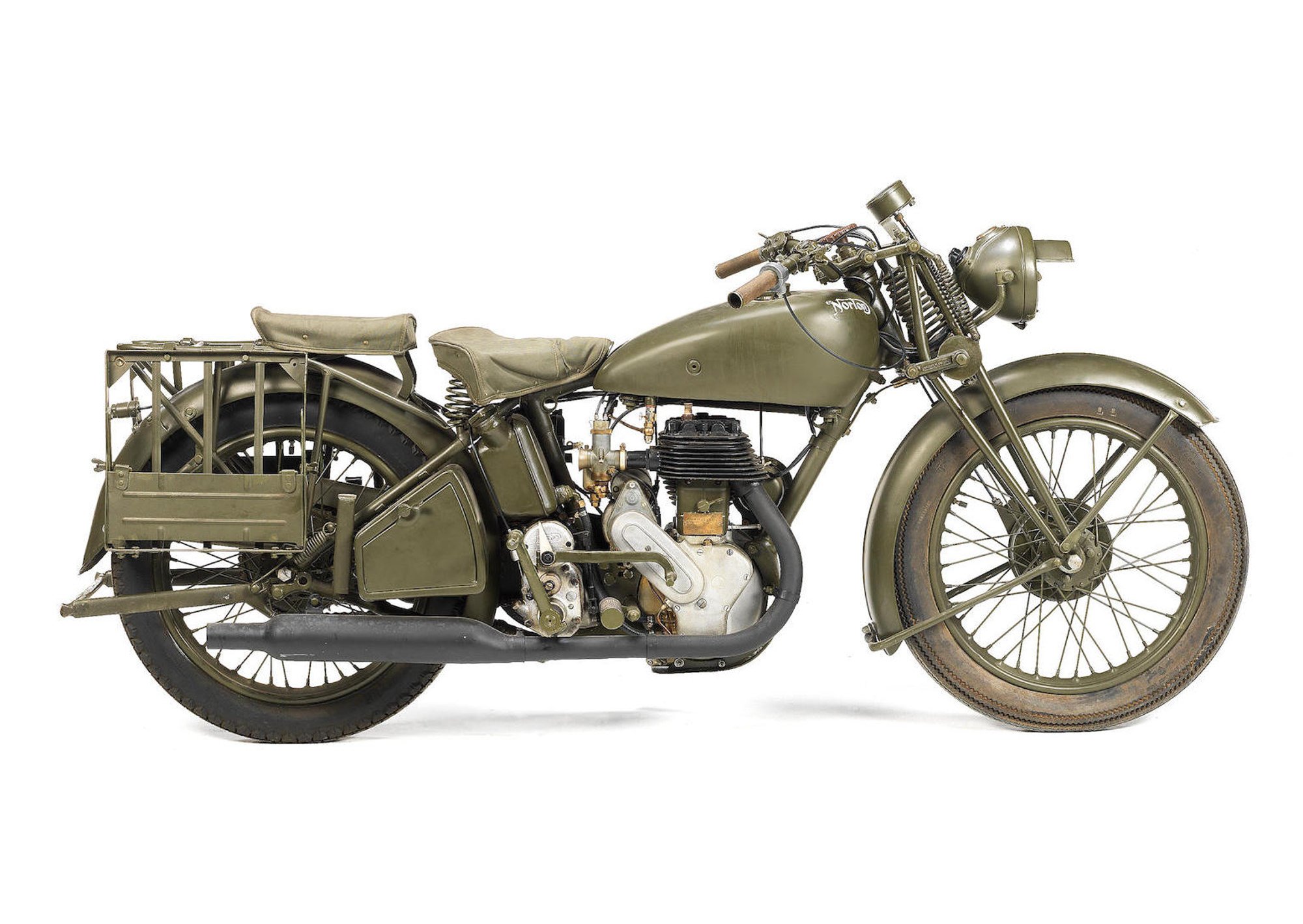