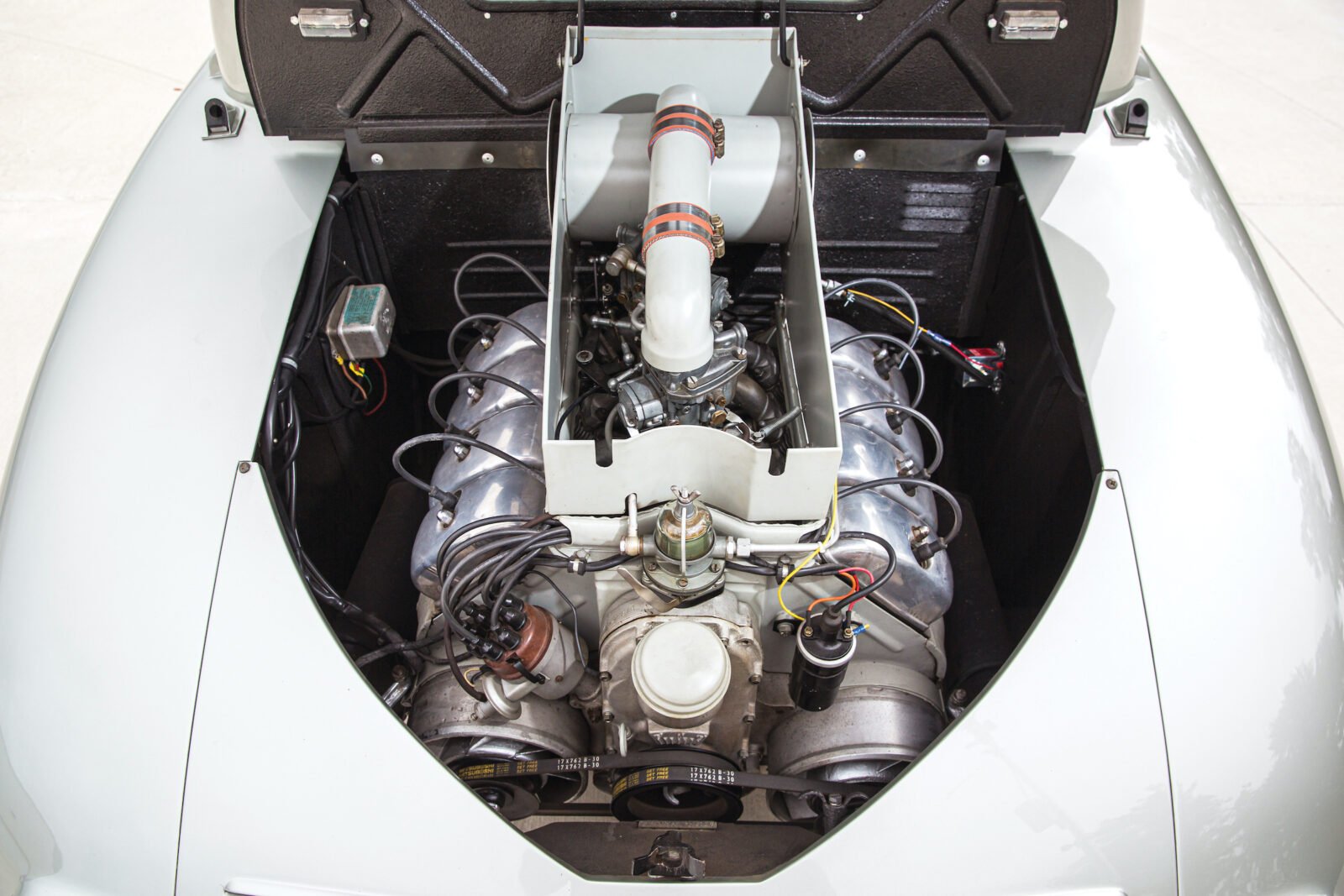 The Tatra T87 was one of the most advanced cars of its age, it has all-independent suspension, a highly-aerodynamic body and they’re powered by a rear-mounted, air-cooled magnesium alloy SOHC V8 and could reach speeds of 100 mph while returning ~20 mpg – a remarkable feat for the era.

The reputation of the T87 is made up of two major parts, its reputation as a ground-breaking car for its age that would have a huge influence on automobile design and aerodynamics, and its reputation for tricky handling when driven by inexperienced drivers due to the rear-mounted V8.

During WW2 the T87 became a favourite of Nazi officers for its comfort and performance, however so many of them ended up dead because of the car’s propensity for snap oversteer (and lift-off oversteer) that the Wehrmacht Command are said to have forbidden them from use. 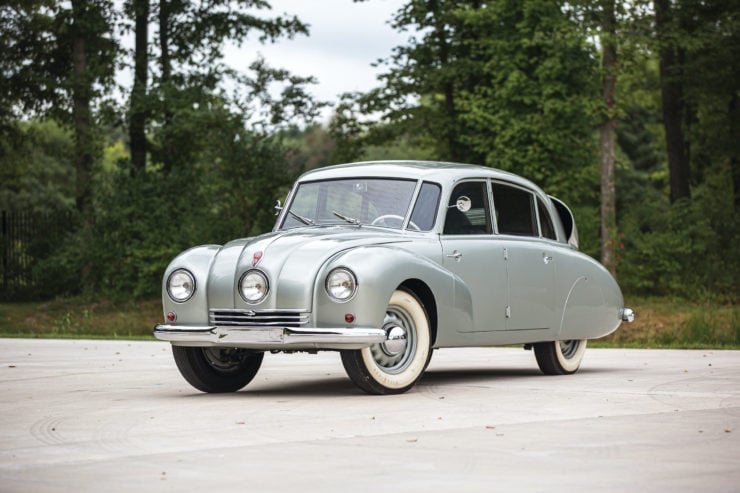 The T87 was primarily the work of three men, Hans Ledwinka, Paul Jaray, and Erich Übelacker. Ledwinka was one of the most important and out-of-the-box automobile engineers of his day, Jaray was a revolutionary designer who penned the shape of airships like the LZ 120 Bodensee (which strongly influenced the LZ 127 Graf Zeppelin and the LZ 129 Hindenburg), and Übelacker was a talented engineer with a slew of patents to his name.

Design for the car was based closely on the Tatra T77 however it included a number of important upgrades. The Tatra T87 uses a backbone-type chassis with a rear-mounted 2.9 litre magnesium V8 that feeds power forwards to a 4-speed transaxle, and the suspension consists of twin transverse leaf springs up front and a swing axle arrangement in the rear.

The engine is an exceptional feat of engineering in itself, it’s made from a magnesium alloy that’s lighter than a comparable aluminum alloy. It has a single overhead cam per bank and it uses air-cooling rather than a heavier liquid-cooling set up. Tatra engineers understood the potential handling difficulties of having a heavy engine out past the rear axle-line so they took significant measures to keep weight as low as possible through the use of magnesium and air-cooling. 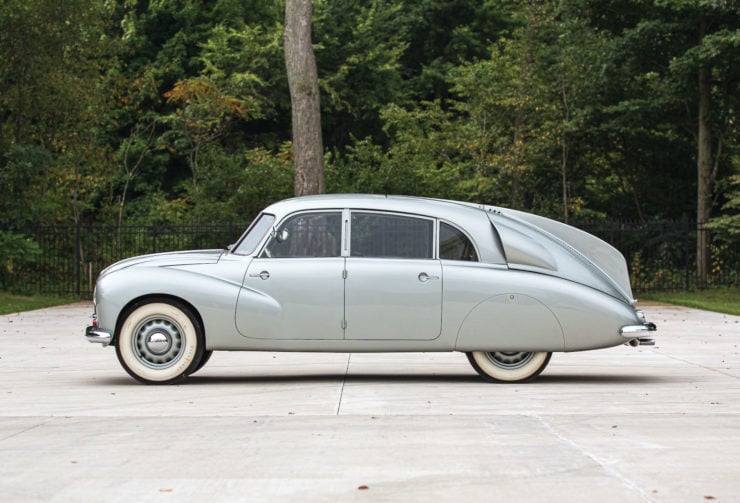 The front trunk (can’t bring myself to use the word “frunk”) is reasonably spacious, and the interior of the car can seat 5 adults in comfort with a fold down armrest in the rear. The design of the T87’s body was state-of-the-art for the era, it’s an outstandingly aerodynamic vehicle with a drag co-efficient of just 0.36 – better than the Ferrari F50 at 0.372.

The design of the Tatra T87 is said to have caught the eye of both Hitler and Ferdinand Porsche, as a result it was used (unofficially) as an inspiration for Germany’s people’s car – the Volkswagen Beetle. So similar were the designs that a lawsuit was launched, the suit was paused when Germany invaded Czechoslovakia, however after the war Tatra restarted the case and in 1965 Volkswagen paid Tatra 1,000,000 Deutsche Marks in an out of court settlement.

Between 1936 and 1950 Tatra built 3,056 examples of the T87, they attracted a slew of important owners including  John Steinbeck, King Farouk I of Egypt, Jay Leno, Felix Wankel, and Erwin Rommel. Jay Leno famously loves his T87 and has written about it extensively over the years.

The T87 you see here is a 1948 model, the third last year of production, it’s presented in excellent overall condition and carries chassis number #3480 332. If you’d like to read more about it or register to bid you can click here to visit the listing on RM Sotheby’s. 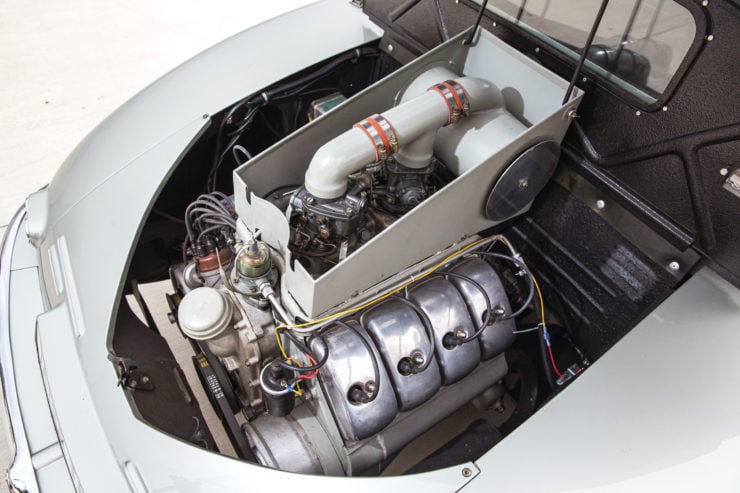 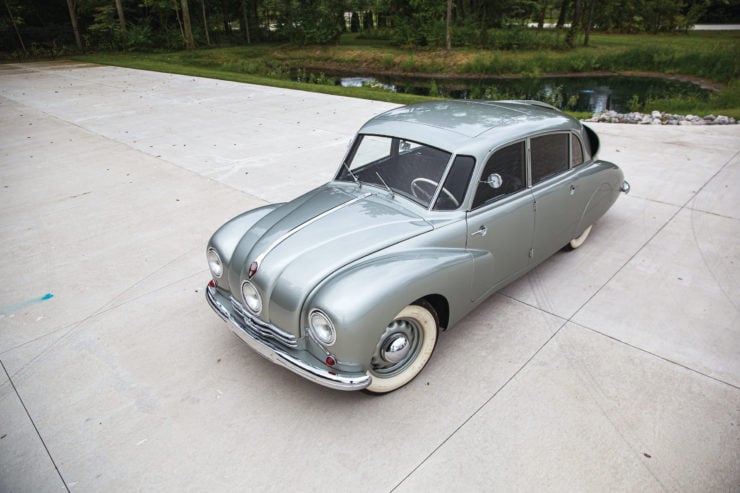 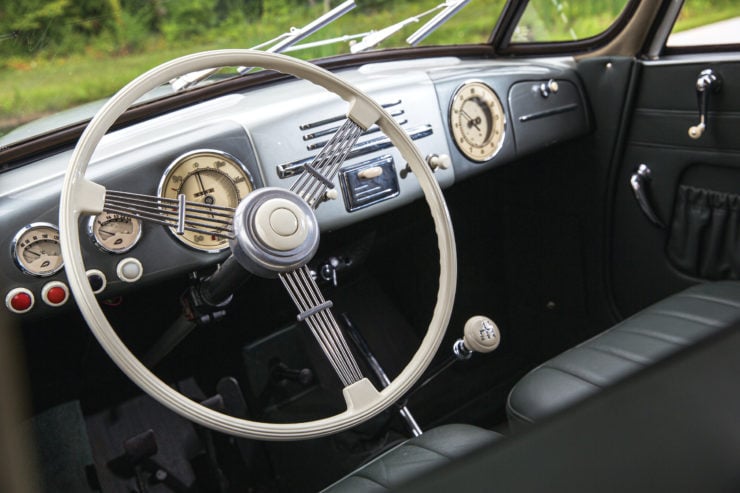 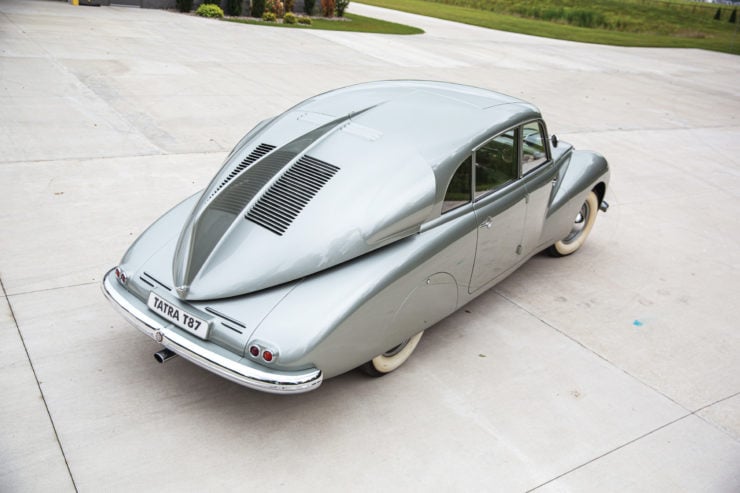 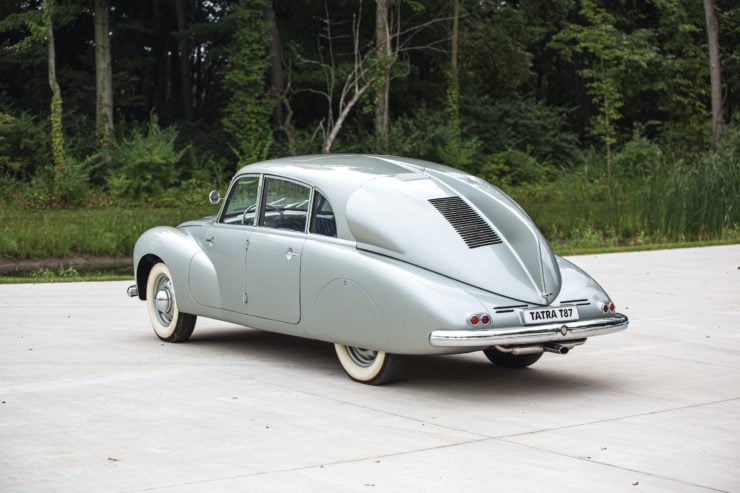 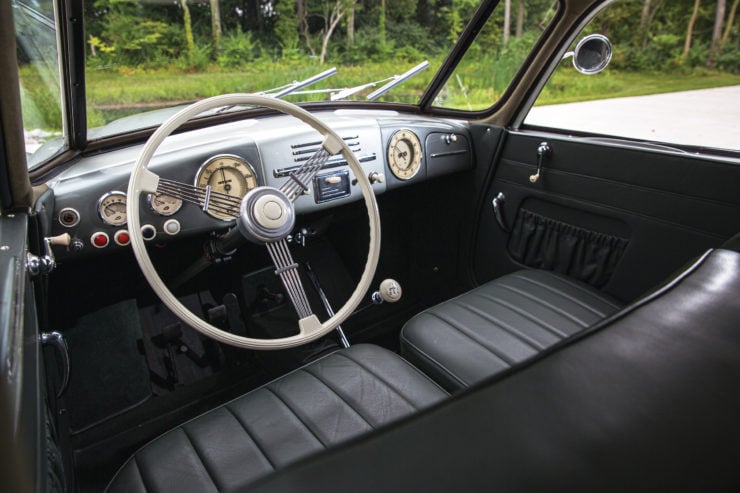 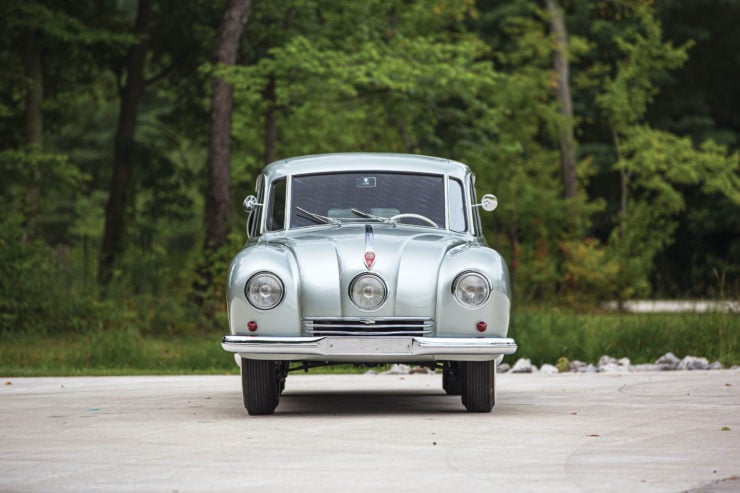 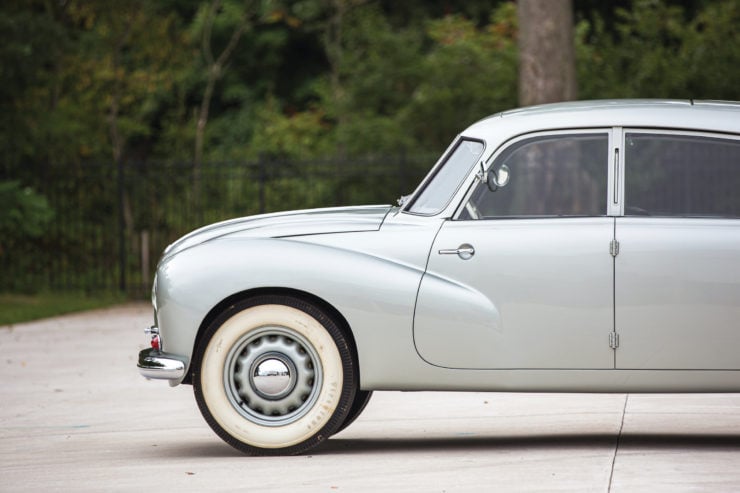 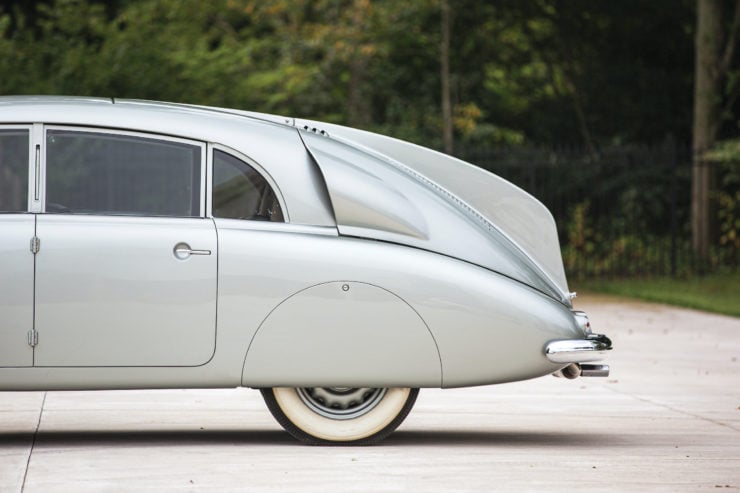 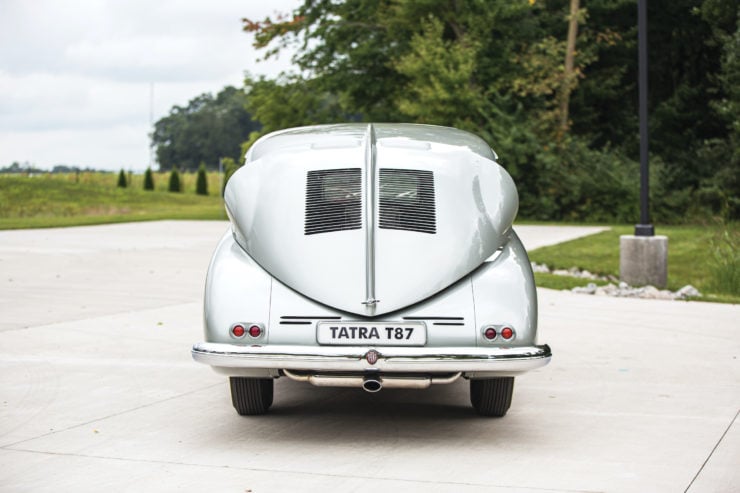 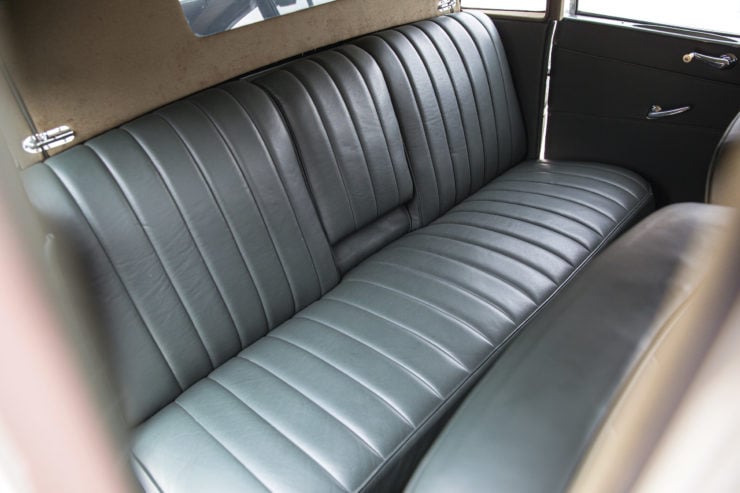 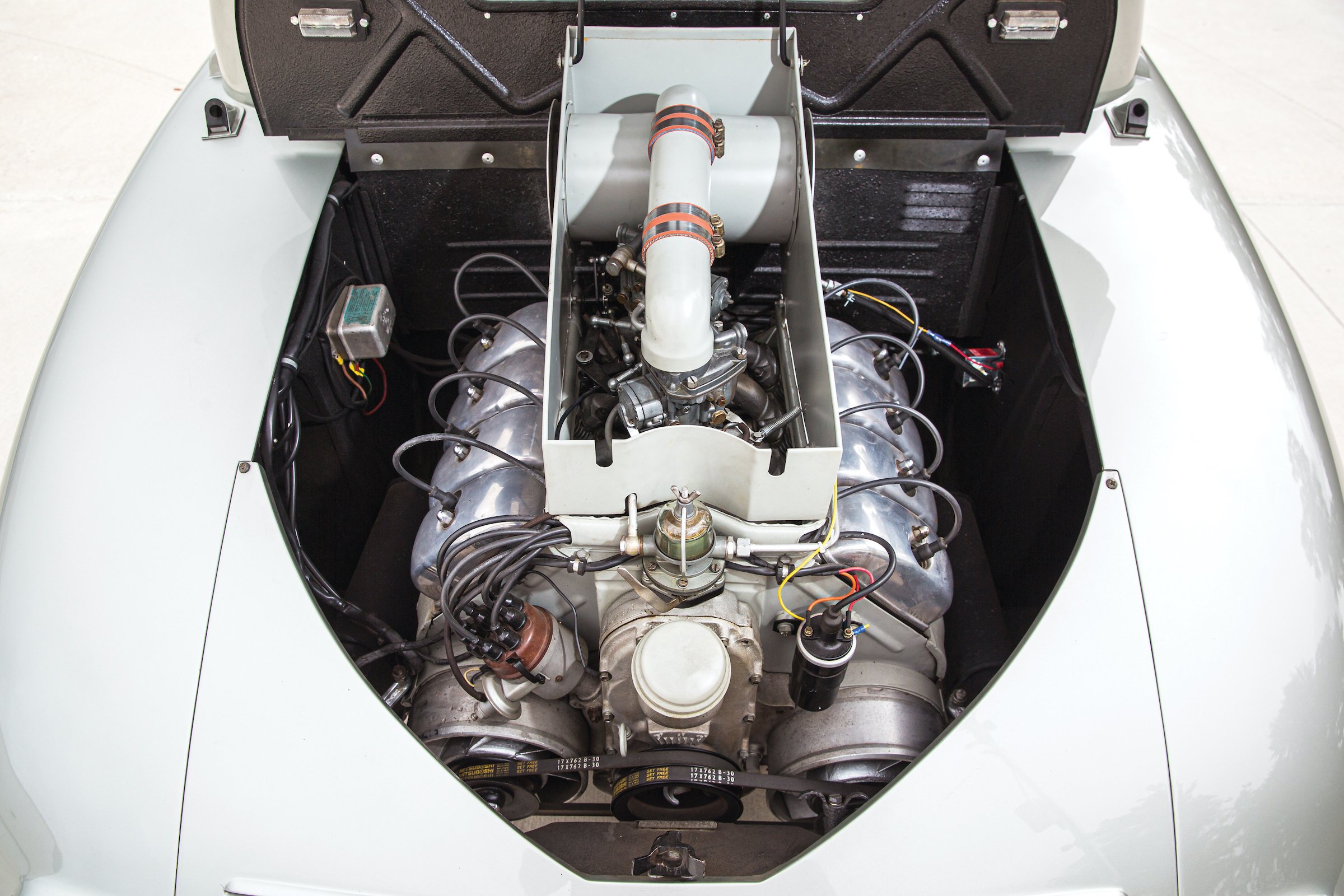