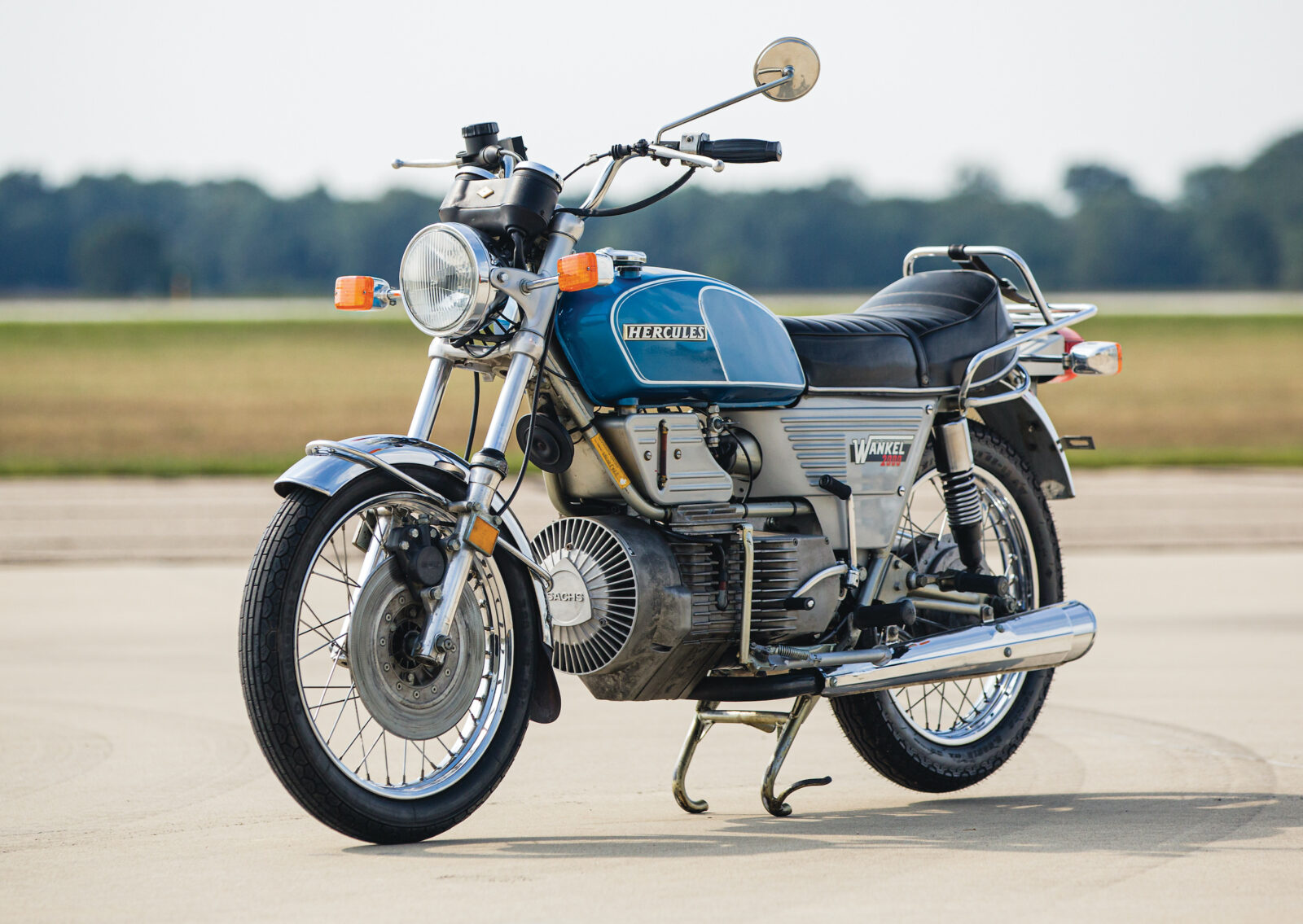 On paper, the Wankel rotary seems like a perfect engine for use in motorcycles. The engines are typically small and lightweight, and they run very smoothly with little to no vibration. The main drawbacks are emissions and apex seals – oil needs to be mixed in with the fuel to lubricate the engine and the apex seals (at each point of the rotor) typically have a limited lifespan.

Fichtel & Sachs had purchased the Hercules motorcycle marque in 1963, around the same time they had bought a license to build Wankel rotary engines with a view to using them in stationary motors and in vehicles like the Arctic Cat Panther 295 snowmobile. 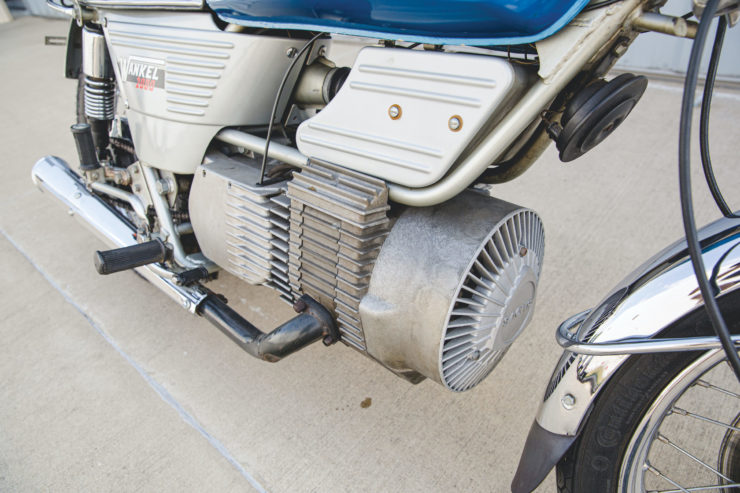 It made sense therefore to combine the Hercules motorcycle marque with their new rotary engines, specifically with the new single-rotor engine they had already developed for the Panther 295. The result of this was the Hercules W2000, also known as the DKW W2000 in Britain and some other markets.

I order to create their first rotary-powered motorcycle the team at Hercules essentially started from scratch, they had the engine they were going to use of course but they now needed to figure out how to effectively build a production motorcycle around it – which no one had ever done before.

The 294cc single-rotor engine has a front mounted fan to increase airflow over the block, it’s an air-cooled motor and rotaries run a little hot at the best of times so this was a wide choice by the engineers. Power is sent backwards through a 5-speed gearbox and a chain final drive. The bike has an electric starter but a kickstarter is also provided as a backup. 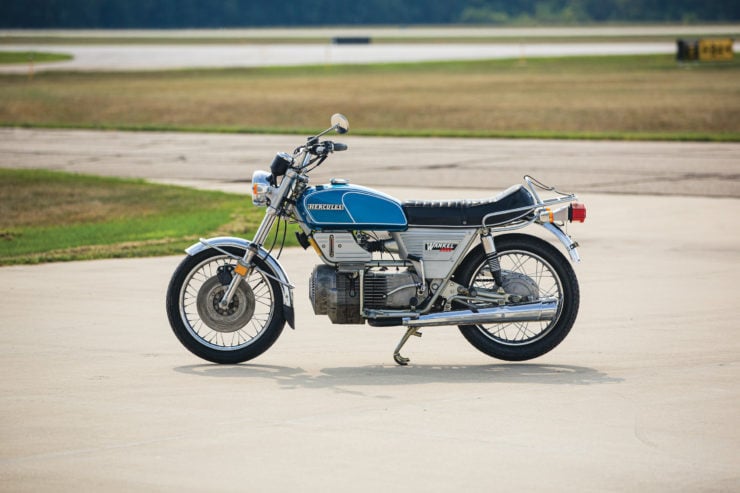 Due to inexperience with Wankel engines insurance companies of the period classed the Hercules W2000 as a motorcycle with a capacity of 882cc rather than 294cc, this larger number is the total swept capacity of the motor and not just the capacity of the combustion chamber. As a result of this, insurance costs in many countries was on par with the most powerful superbikes of the era, despite the far lower power output.

The Hercules W2000 was sold largely to people who were interested in the unusual and quirky nature of the engine, but sadly sales weren’t particularly good. Much quicker, more economical, and cheaper to insure motorcycles were easy to find and by the end of the the 1974 to 1977 production run just 1,784 had been sold.

Today they’re highly collectible and far cheaper to insure, and they always attract a lot of attention when they come up for sale.

The 1977 Hercules Wankel 2000 you see here is from the final year of production, it’s fitted with a luggage rack and it has just 8,550 miles on the odometer. If you’d like to read more about it or register to bid you can click here to visit the listing on RM Sotheby’s. 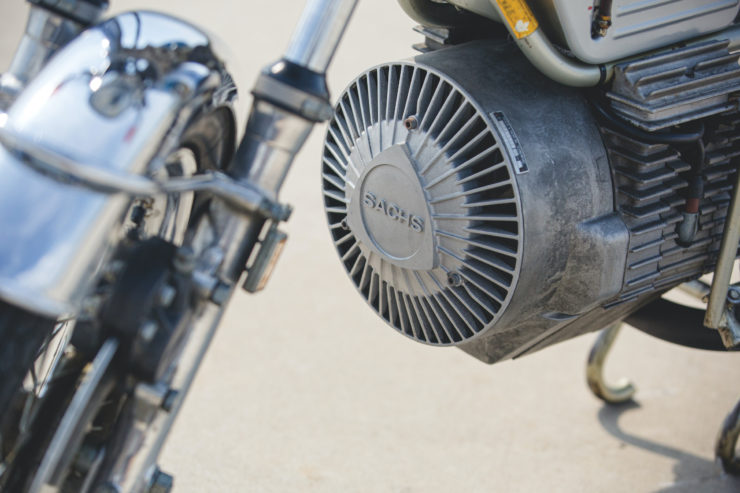 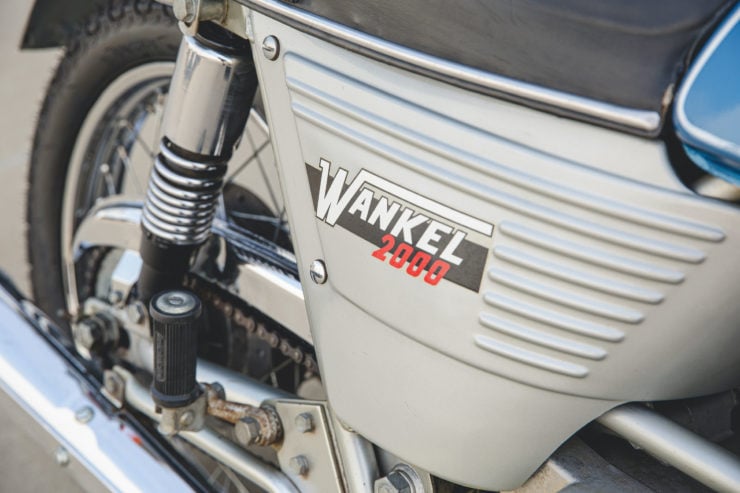 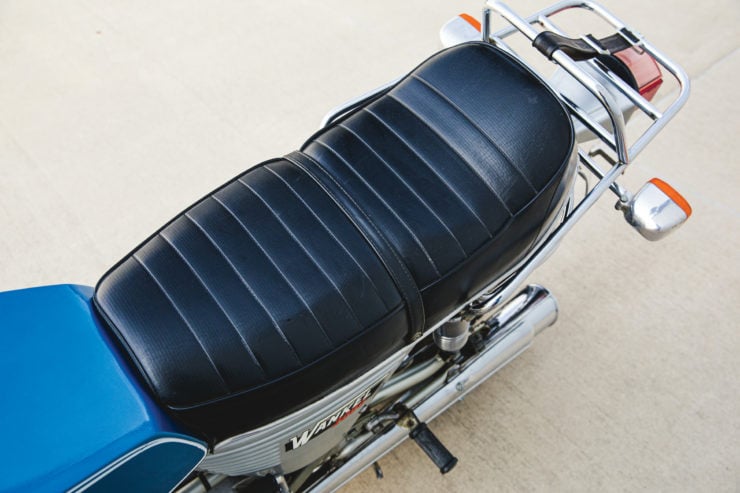 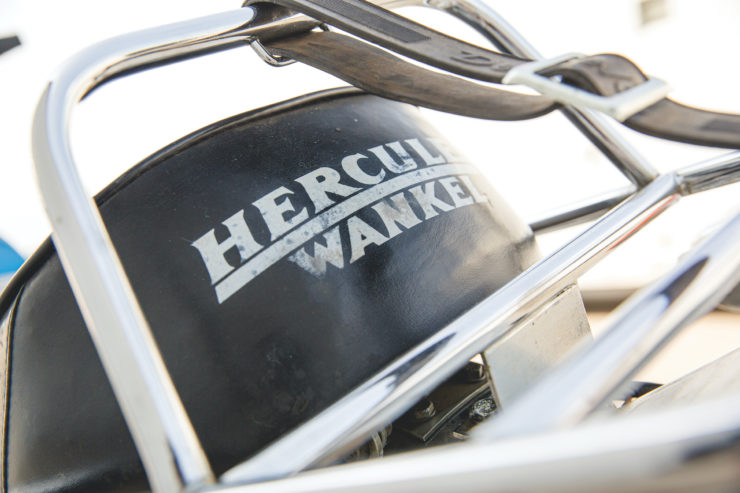 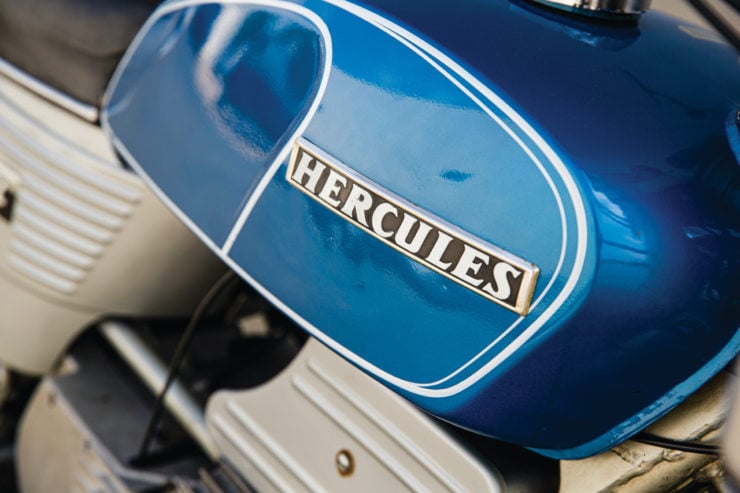 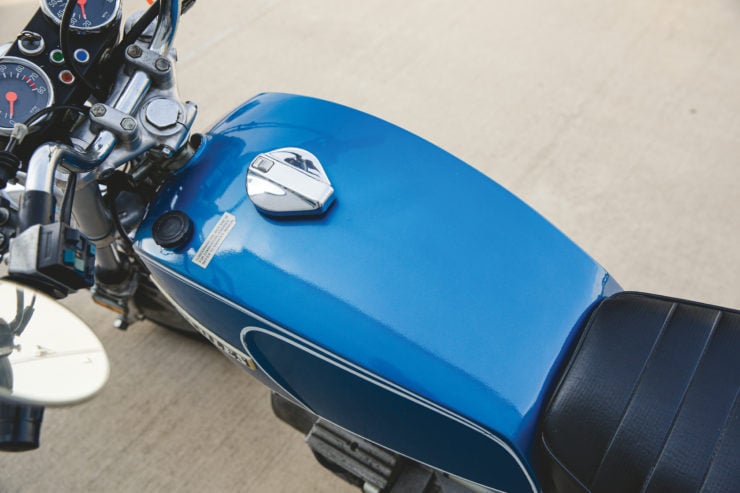 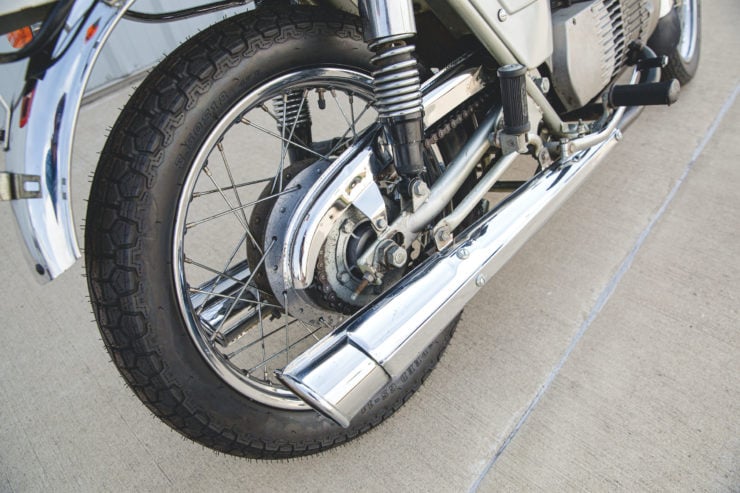 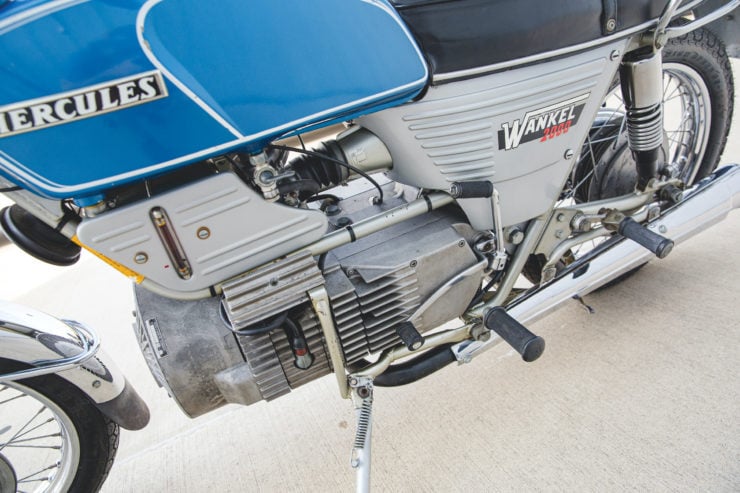 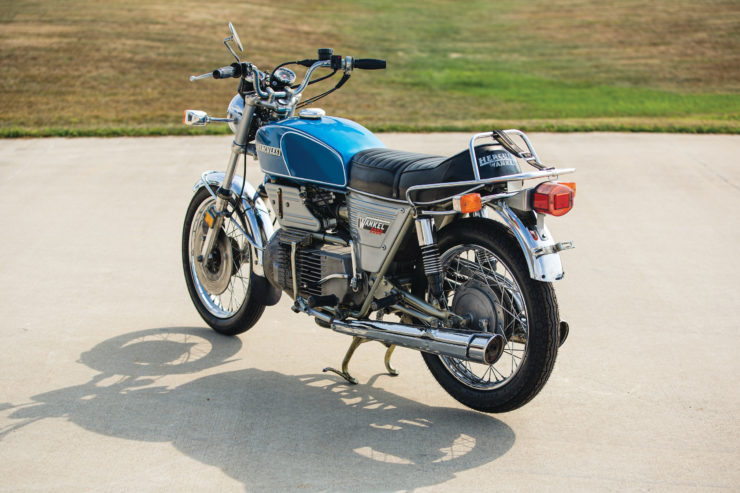 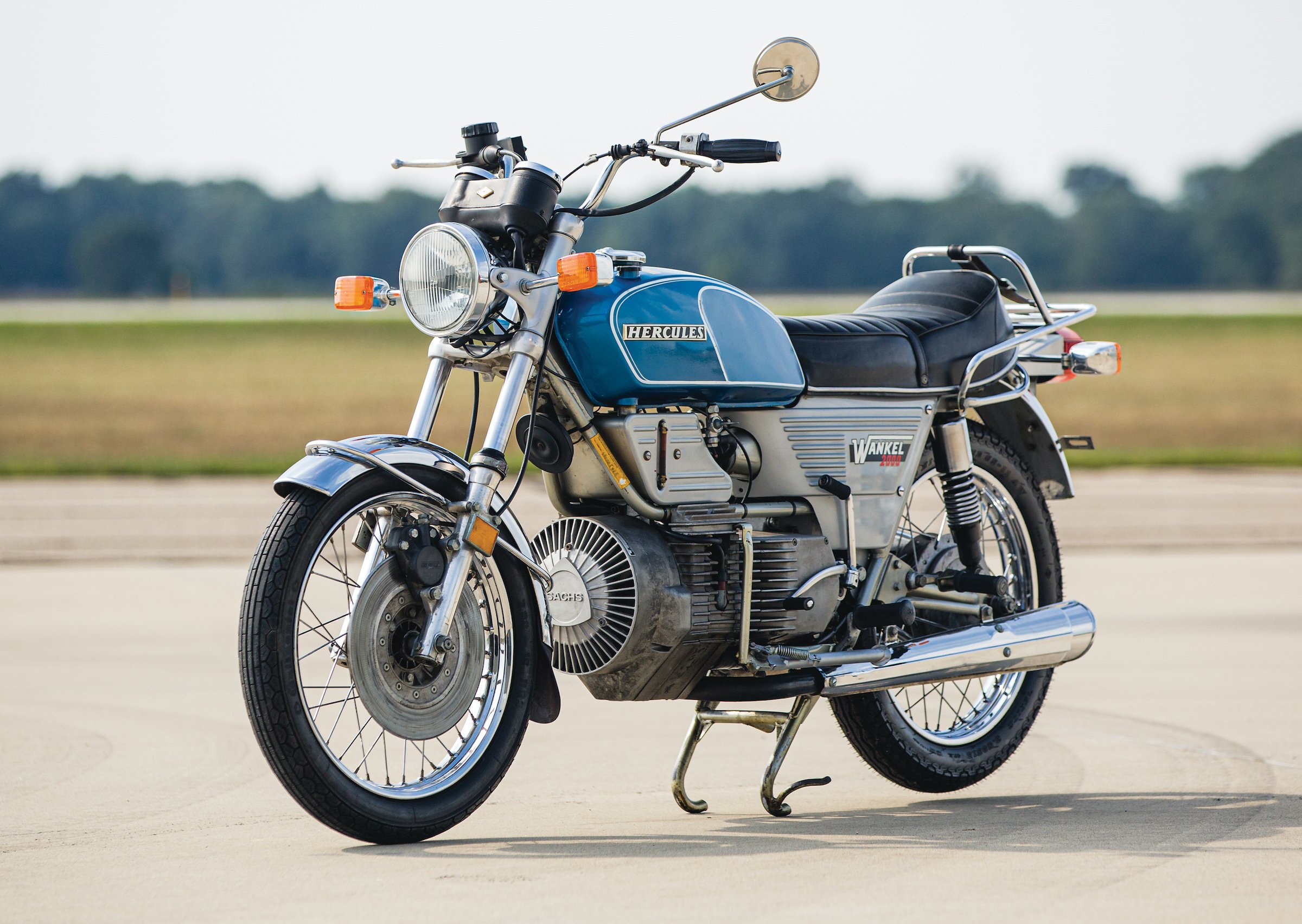