The Nash-Healey is a British/American sports car that was thought up over dinner and drinks aboard the RMS Queen Elizabeth ocean liner on a journey between the United States and Great Britain.

By pure coincidence, Donald Healey was traveling to the United States on the ship looking to secure a supply of Cadillac V8 engines, he got chatting to a fellow photography buff onboard who he later learned was the Nash-Kelvinator CEO George Mason.

The two men hashed out a plan to supply the Donald Healey Motor Company with engines, transmissions, and rear axles for a new sports car if Cadillac should refuse. Cadillac did refuse, and so we got the Nash-Healey.

The chance meeting between Donald Healey and George Mason aboard an ocean liner that resulted in the Nash-Healey being built is the stuff of automotive legend.

The meeting led to cars being developed that would compete with great success at the 24 Hours of Le Mans and the Mille Miglia, a Nash-Healey was even used as the official pace car of the 1951 Carrera Panamericana, going on ahead of the race cars to ensure the course was clear for them. 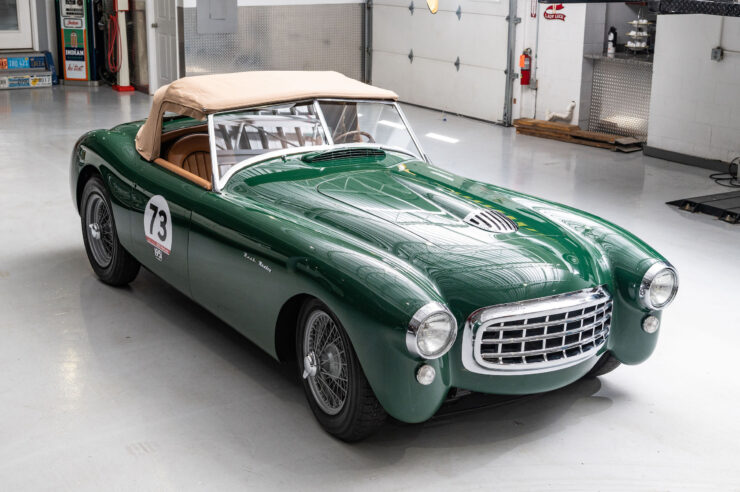 As a first-year, 1951 Nash-Healey this car has a more traditional headlight arrangement, unlike the later cars with bodies by Pininfarina.

Some claim that the Nash-Healey was the first sports car introduced in the US by a major automobile manufacturer after the Second World War, however this is hotly debated as the cars were built in England.

Over the course of its 1951 to 1954 production run over 500 Nash-Healeys would be built, including some prototypes and race vehicles. Today they’re considered highly collectible and a few can be seen competition in vintage race meets, staying true to their motorsport heritage from the early 1950s.

As with almost all cars of the time, the Nash-Healey was made using body-on-frame construction, with independent front suspension and a live axle rear end with drum brakes on all four corners.

The body was initially designed by the Donald Healey Motor Company and built by Panelcraft Sheet Metal in England, though from the second year of production onwards Nash had Pininfarina redesign the body to more closely follow Nash styling cues, and Pininfarina then built the bodies in Italy. 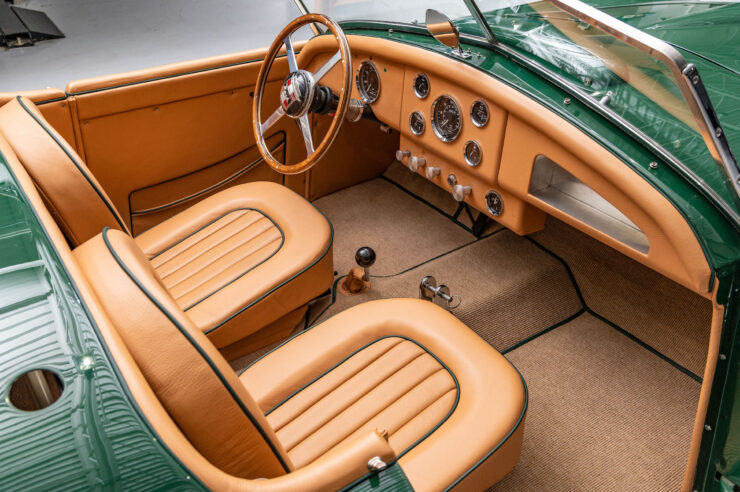 The interior is somewhat reminiscent of the later Austin-Healey 100, a car built to a very similar recipe as the Nash-Healey.

The chassis used on both versions was essentially a widened and reinforced version of the chassis used on the Healey Silverstone – a box-section ladder-type steel frame. The independent front suspension consists of coil springs with a trailing link and a sway bar, and in the rear the car rides on leaf springs, with a live axle located with a Panhard rod.

Power is provided by a 3.85 liter inline six-cylinder engine from the Nash Ambassador, power is sent back through a three-speed manual transmission with a Borg-Warner overdrive to the live axle rear. In original configuration the engine produced 112 hp however Donald Healey, a highly experienced race car driver in his own right, realized a power increase was needed.

He had a lightweight aluminum alloy cylinder head developed that gave the engine higher-compression and better flow characteristics. A pair of 1.75 inch SU carburetors were then added, boosting power to 125 hp in road-going trim initially, rising to 140 hp in later cars.

The Nash-Healey was capable of doing the 0 to 60 mph dash in 12 seconds, a respectable time for the era, and it had a top speed when new of approximately 104 mph. By and large Americans loved the car although the later cars by Pininfarina with the headlights set into the grille were an acquired taste for some. 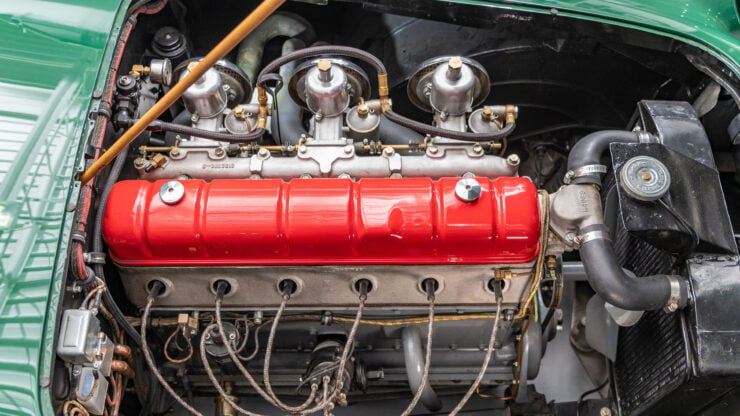 Power is provided by a 3.85 liter straight-six engine from the Nash Ambassador, in this case fitted with a Healey racing alloy head and triple SU carburetors.

The car you see here is a first-year example of the Nash-Healey, built before Pininfarina restyled the car and took over production of the bodies. Just 104 of these 1951 cars were built, and those later Pininfarina cars are a more commonly seen coming up for sale.

This example of the Nash-Healey was bought by internationally celebrated sculptor and furniture artist Wendell Castle in the early 1990s. He sent it off to Posies Rods and Customs of Hummelstown, Pennsylvania for a restoration, and the engine was sent to Concours Classics Motor Cars of Macedon, New York for a rebuild.

The body rebuild included a few unique touches, including the fitment of an earlier Nash grille, and the engine was rebuilt with a rare Healey factory racing aluminum head and triple SU carburetors. Sadly, Castle would die before the unusual car could be completed.

Today the car sits in the condition it was in when he died, and the auction listing states that “much of the remaining work is said to consist of the installation of various hardware and parts and the sorting of mechanical systems.”

Unusual project cars like this don’t come along every day, particularly out of the ownership of a signifiant artist, so it’ll be interesting to see what this Nash-Healey sells for when it crosses the auction block with RM Sotheby’s on the 7th of October. 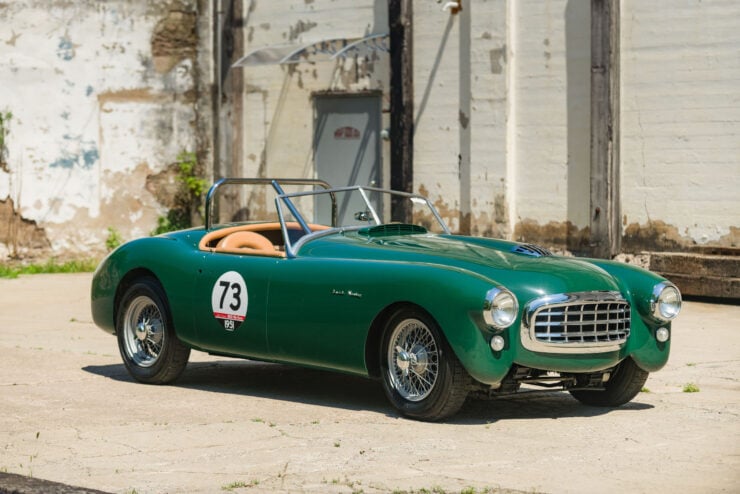 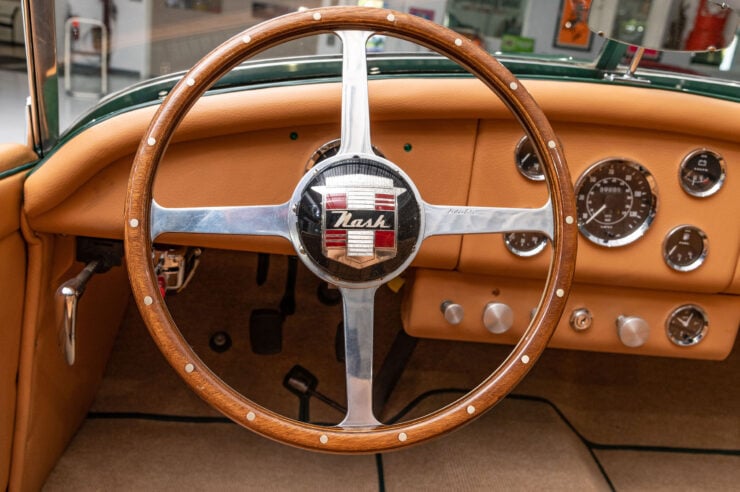 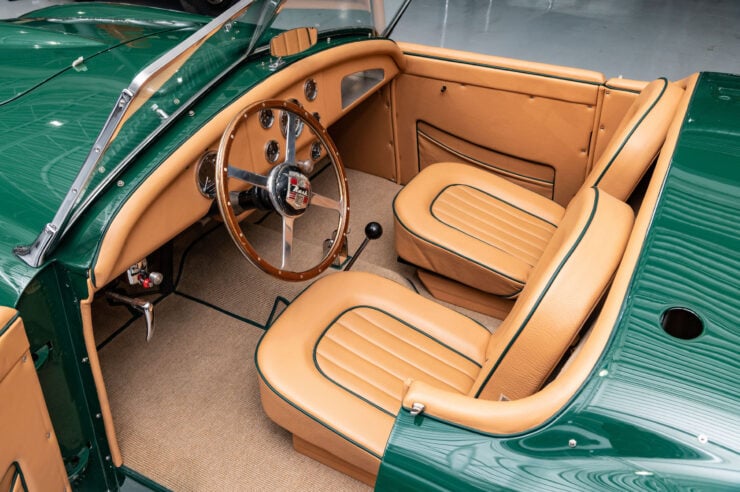 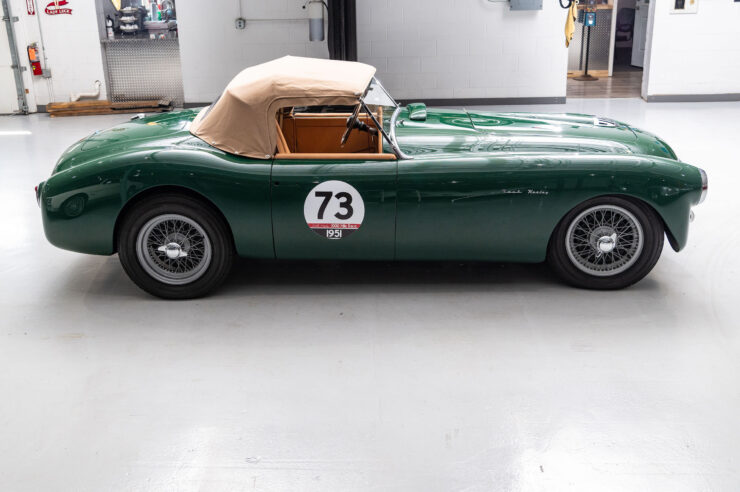 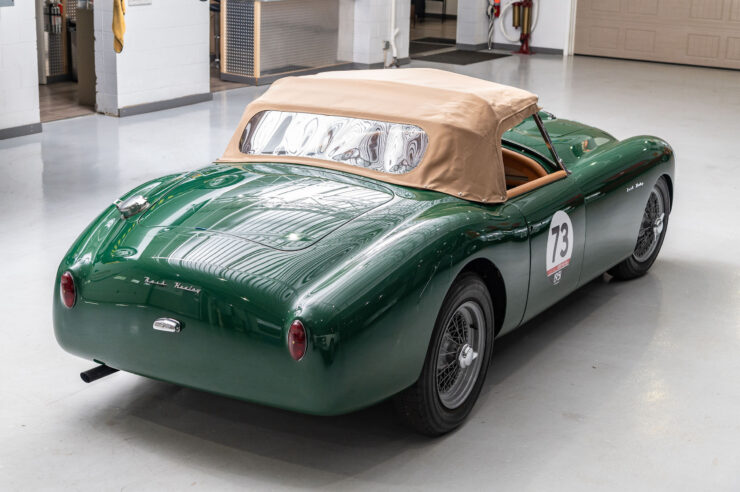 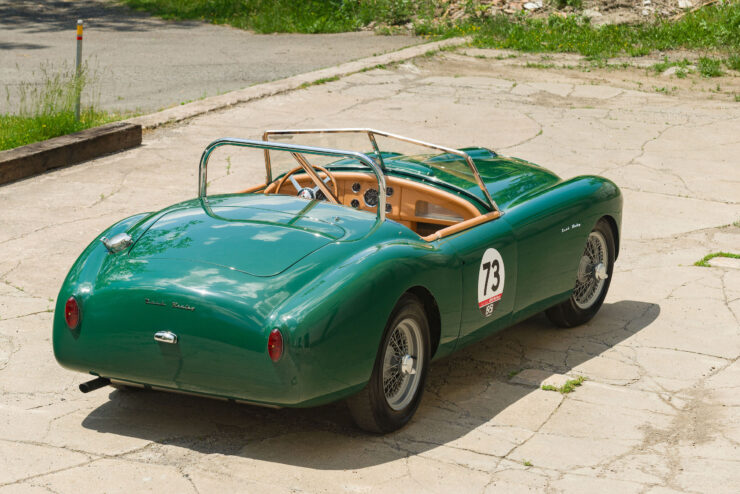 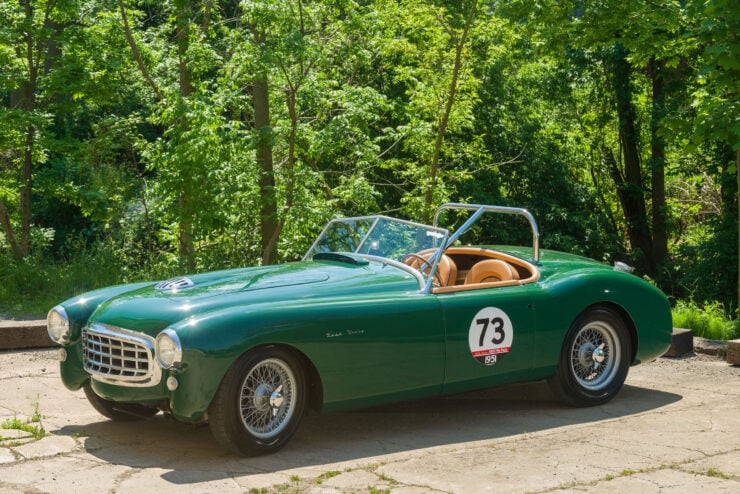 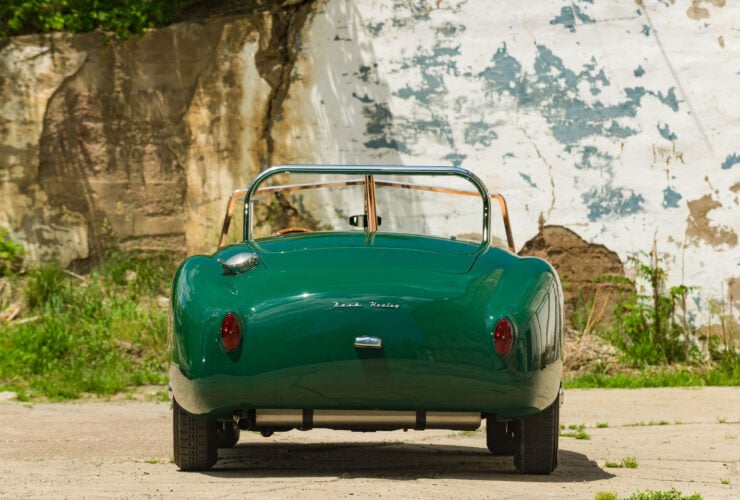 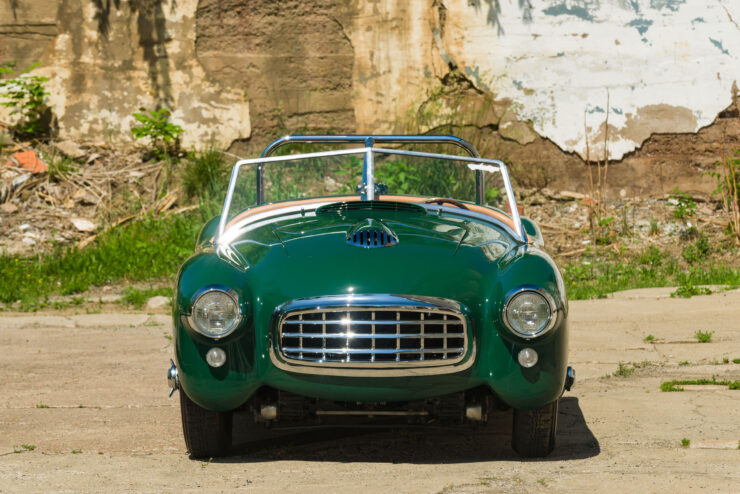 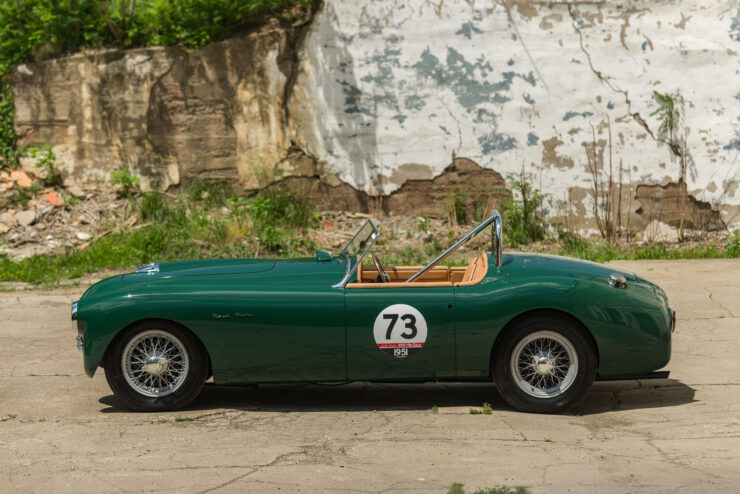 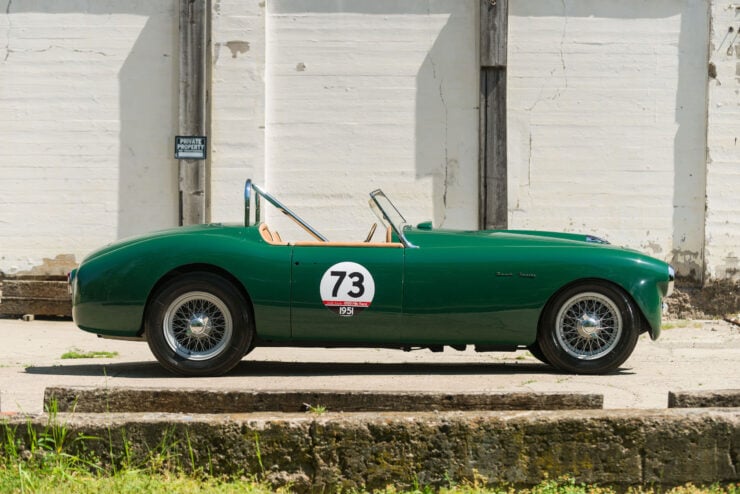 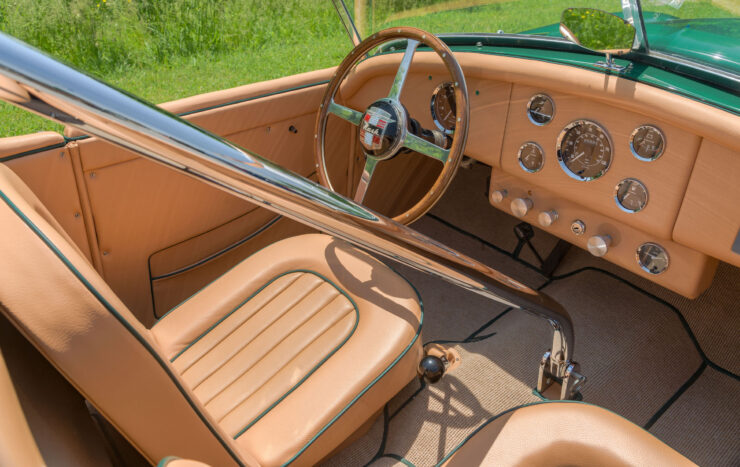 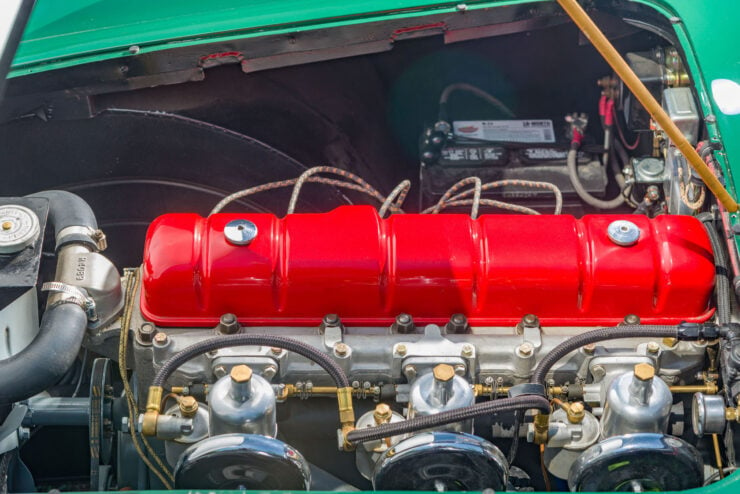 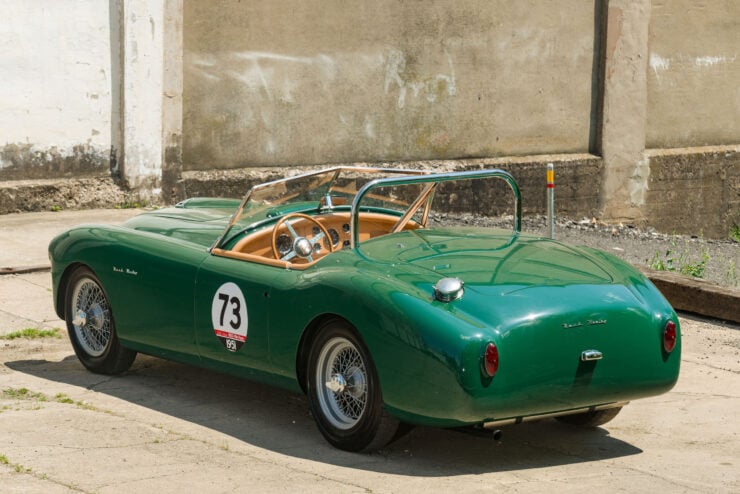