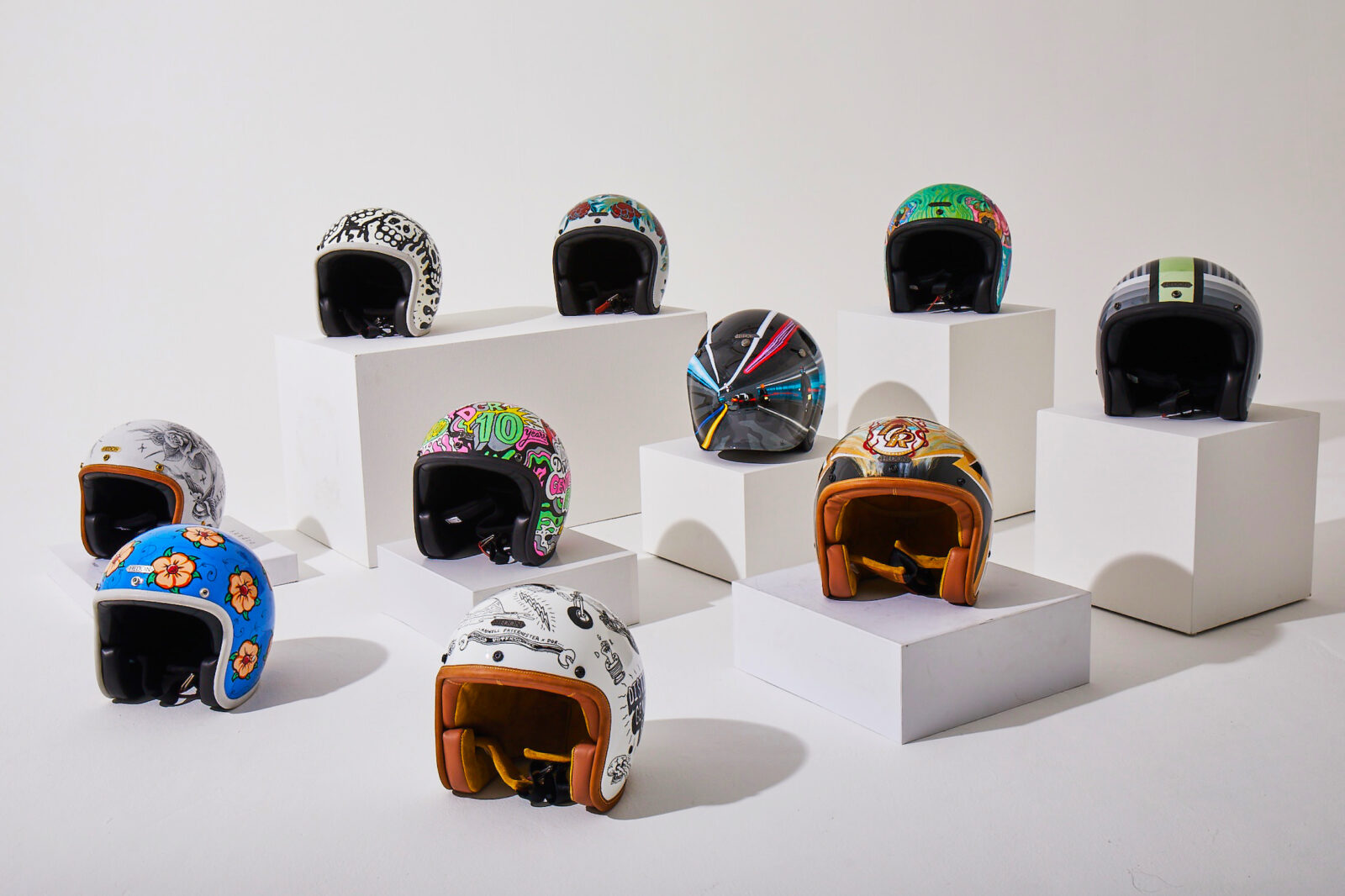 The Decade of Dapper Helmet Auction includes the work of 10 celebrated artists from around the world, each was given an identical canvas – a Hedon helmet – and asked to create their own personal masterpiece.

This project was created to mark the tenth anniversary of the most famous motorcycle charity event in the world – The Distinguished Gentleman’s Ride. This ride, often referred to simply as “DGR” for the sake of brevity, now takes part in 105 countries and 1,000+ cities around the world.

Since its founding in 2012, DGR has raised over $31.5 million USD for prostate cancer research and men’s mental health programs, thanks to a total of over 340,000 riders taking part over the decade.

The Decade of Dapper Helmet Auction

We’ve include all 10 helmets below, and each helmet has the artist’s name and information beneath it. If you’d like to visit the main auction page to see all helmets and place your bids you can click here. 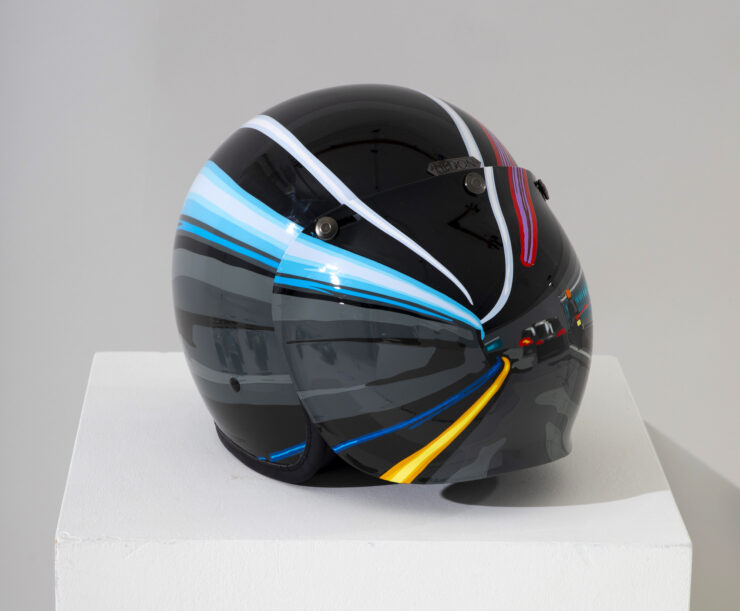 A truly unique artist, Joel is the only automotive artist in the world who uses hand-cut vinyl as his medium for creation, giving his work a completely unique finish to anything else. The results are bright, bold Pop Art artworks that will deliver a punch of color to any space.

In the very short time that Joel has been creating vinyl artworks, he has been featured in, or collaborated with, The Road Rat; Motorsport magazine; Classic and Sports Car, Petrolicious.com, Octane, Classic Driver, Silodrome, and more; as well as creating his very own motoring-inspired art page, @speed_icons. 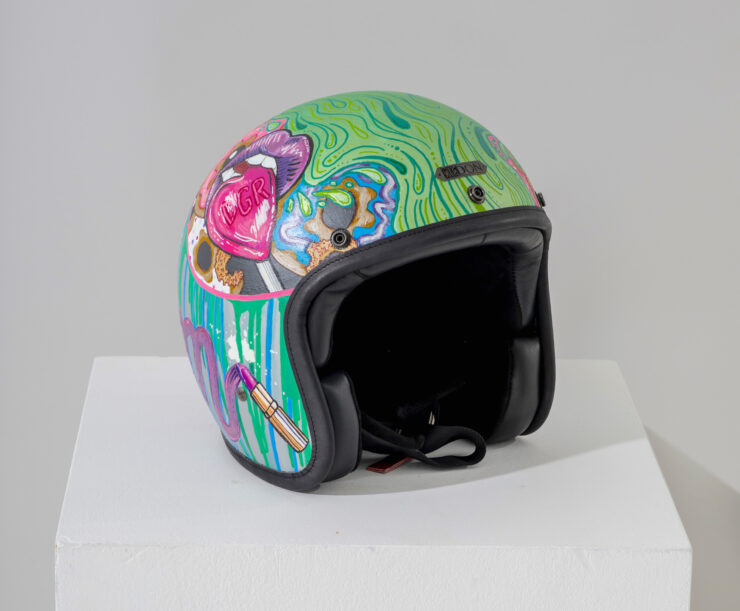 Appearing on shows such as Goblin Works, Motor Pickers, World’s Greatest Cars, Mod Shop, and I’m Not Driving That; Helen Stanley is a Car Customiser, Artist, and full-time Petrol Head. Starting her creative career in the fashion industry with a constant obsession with cars, it was inevitable that she would end up around custom classics.

Beginning with a custom shop, Helen now designs builds, creating car art, and presenting custom car shows on TV. Helen currently runs a custom car club called Anti-Taste Collective, which is aimed at encouraging a wider, more diverse audience to get involved in the custom scene. Through her work on TV and social media, she is determined to encourage and motivate other petrol heads no matter what their taste, gender, budget, or ability. 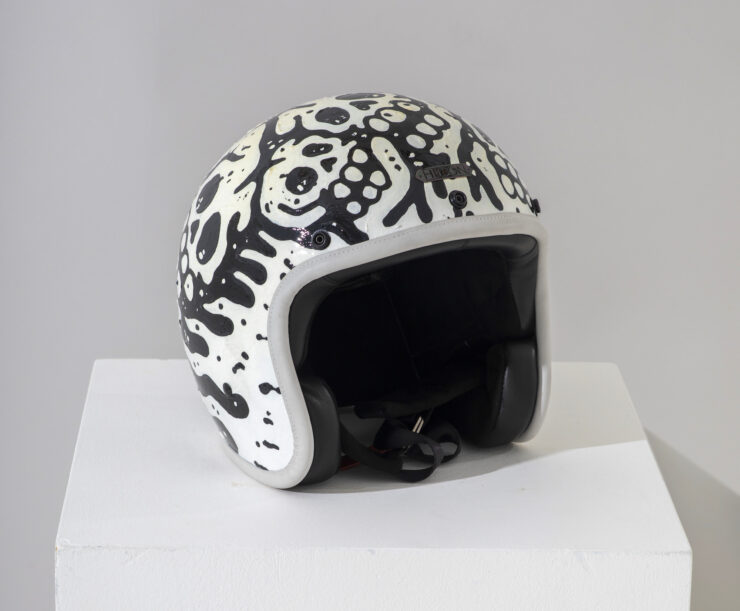 A legendary local from Sydney, Australia, Sindy is an illustrator, mural artist, heavy metal fan, and fellow moto-lover. His designs have been adapted for all sorts of illustrative branding, appearing in all shapes and sizes from merchandise to full-blown murals – each with their own loud and fun style with Sindy’s flair and a sense of spontaneous energy.

Sindy’s special style features creepy characters and punchy lettering have become recognisable by all those who have seen his work. It’s hard to take a walk through Sydney’s Inner West without spotting a Sindy Sinn or two. 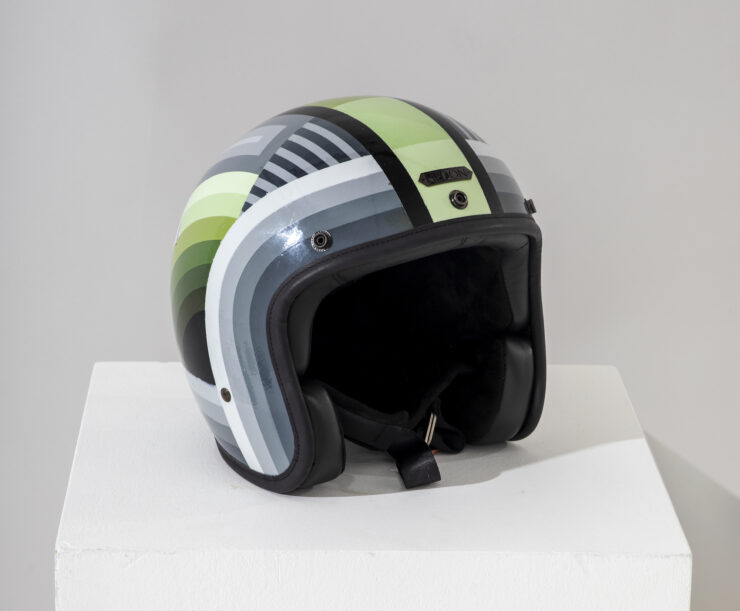 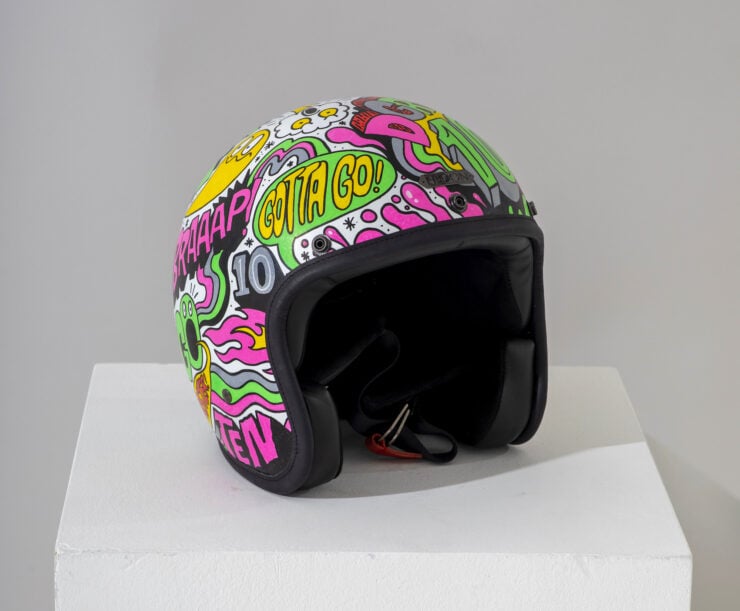 After starting his career as a graphic designer at award-winning studios in the Northeast (USA), Chris accidentally became an illustrator, and he’s pretty happy about that. This strange transformation was a result of his daily drawing projects that he started in late 2007, in fact he’s still posting a new drawing every day.

Chris is an independent illustrator and letterer, and often a combination of both, creating images for all types of projects including advertising campaigns, editorial illustrations, books, social media, and murals. 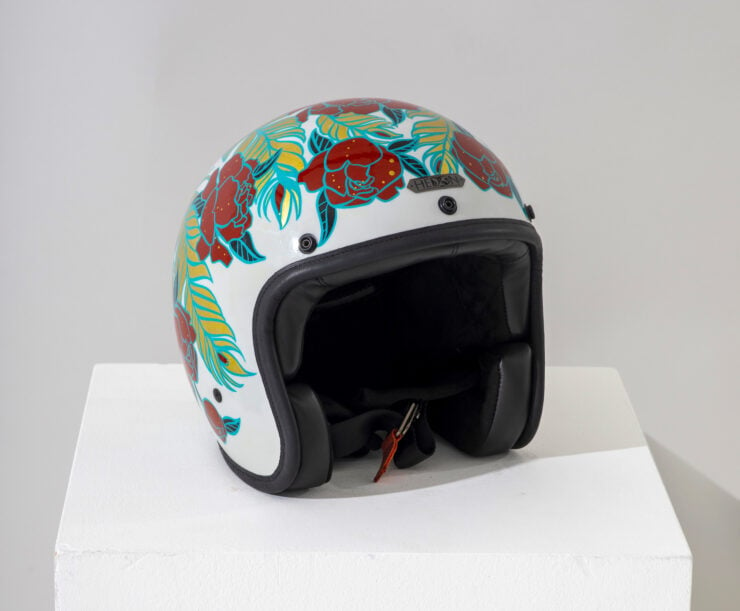 Kayla’s art is inspired by travels and a mission to do good, making her the perfect DGR helmet artist! She founded Inferno Art Studio L.L.C. in 2012 where she divides her time between commissioned art and my own work. Utilize diverse subject matters and mediums; from oil and watercolors, to graphic art and design, enamels, and mural work, Kayla is always growing her work, and herself.

“As I grow as a human, I find myself wanting to give back to those doing good and so I’ve started my next page with the Art for Good Project. My artwork takes an explorative eye of the world around me, often seeing culture and landscape through my adventurous nature and addiction to travel. My subjects are as broad as nature and humanity are interesting, and I find new attitudes in my work the more of the world I see.” 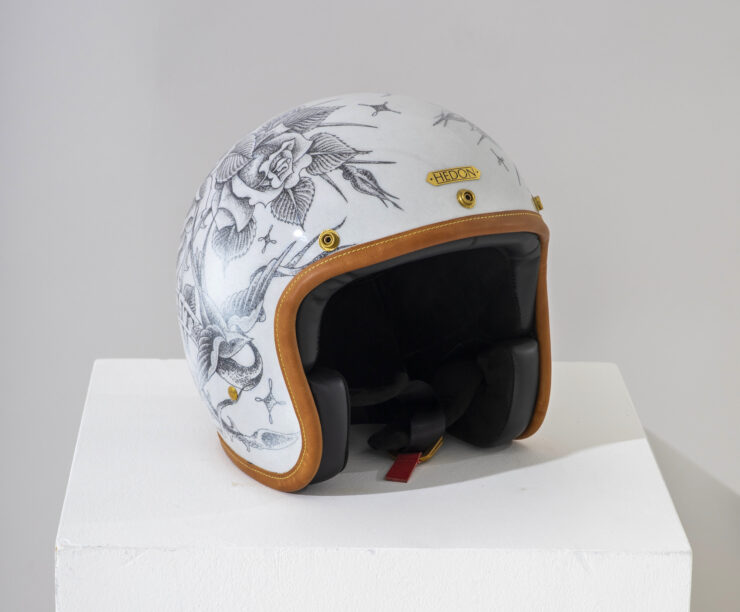 In the past decade, Luke has proudly starred as a guest judge on Spike TVs “Inkmaster,” designed the #GoVote campaign for Jay-Z’s OnTheRunTour, created an egg for the Faberge Big Egg Hunt NYC alongside artists Jeff Koons and Zaha Hadid, and been the face of the best-selling Inked Magazine issue, ever. Luke has also created proprietary art for major brands like Hermès, Harley Davidson, Gerber Gear, and more! 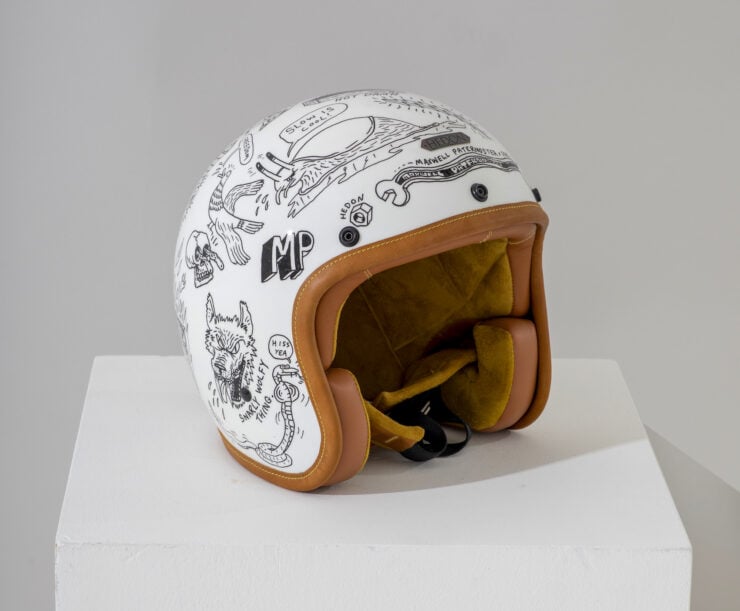 Beginning his artistic journey as a boy in a Saturday art class in Ipswich, Maxwell’s illustration style has always made its way back to cartoon, back-of-the-textbook style drawing – despite many attempts to adapt and change. Maxwell taps into the memories of his youth to create his pieces, drawing inspiration from cartoons, comics, robots and machines – almost everything you’ll find a boy drawn to in the department store toy section.

His style is simple, effective, and is something we can all get ourselves lost in. Every inch of his work tells a story with its dark, edgy, and twisted characters; lightning bolts and lasers. Maxwell is a truly unique artist, who always brings his work back to the world of motorcycling. 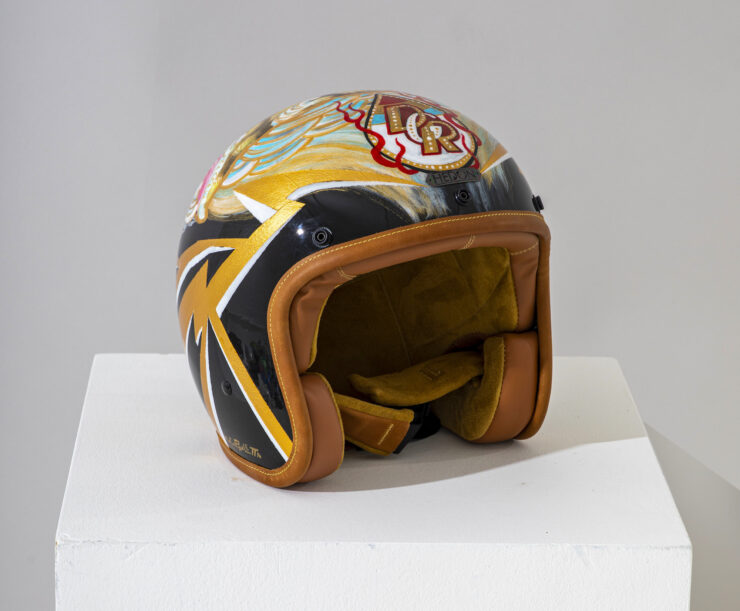 Founder of the tattoo parlour, The Family Business, in London’s Exmouth market since 2003, the studio soon became a cardinal presence in both the London and International tattoo scenes and has been growing steadily ever since.

Born and raised in Verona, he originally studied to be a lawyer, however, tattooing was his true calling. He’s arguably the most elegant and well-dressed tattoo artist in the world, a man with finely acquired taste that he has expressed at countless DGR events. 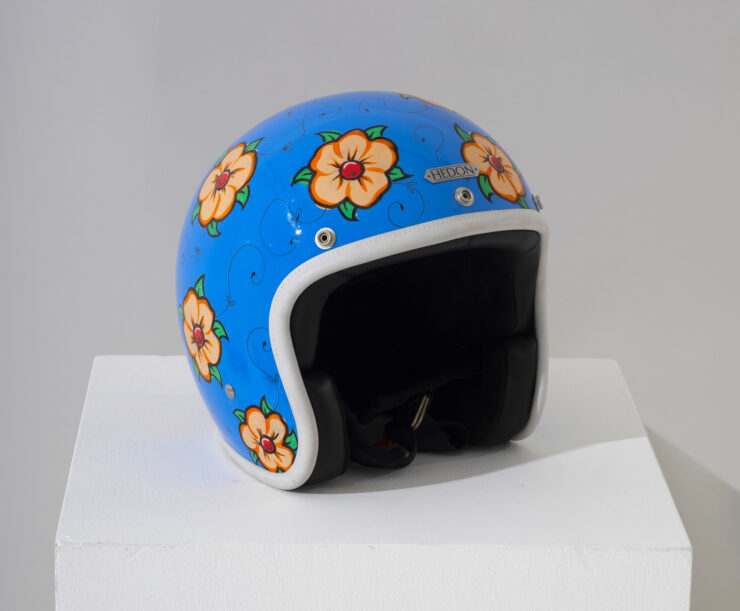 Arguably one of the most popular names in skateboarding, Steve Caballero began skating in 1976 at the age of 12 and started his career at age 14. He turned pro in 1980 during the Gold Cup series at the Oasis Skatepark, Southern California. By this time, Caballero had invented the ‘Caballerial’ (also known as ‘Cab’), a skateboarding trick also known as the fakie 360 aerial, and is also credited with inventing the frontside boardslide.

Skating isn’t the only thing in Steve’s wheelhouse though. As a creative outlet off the board, Steve uses a brush and a pen to help create and design artwork and graphics for various companies within the skateboard and motocross industry, producing original paintings for art shows all over the world and offering reproduction artist prints for sale. 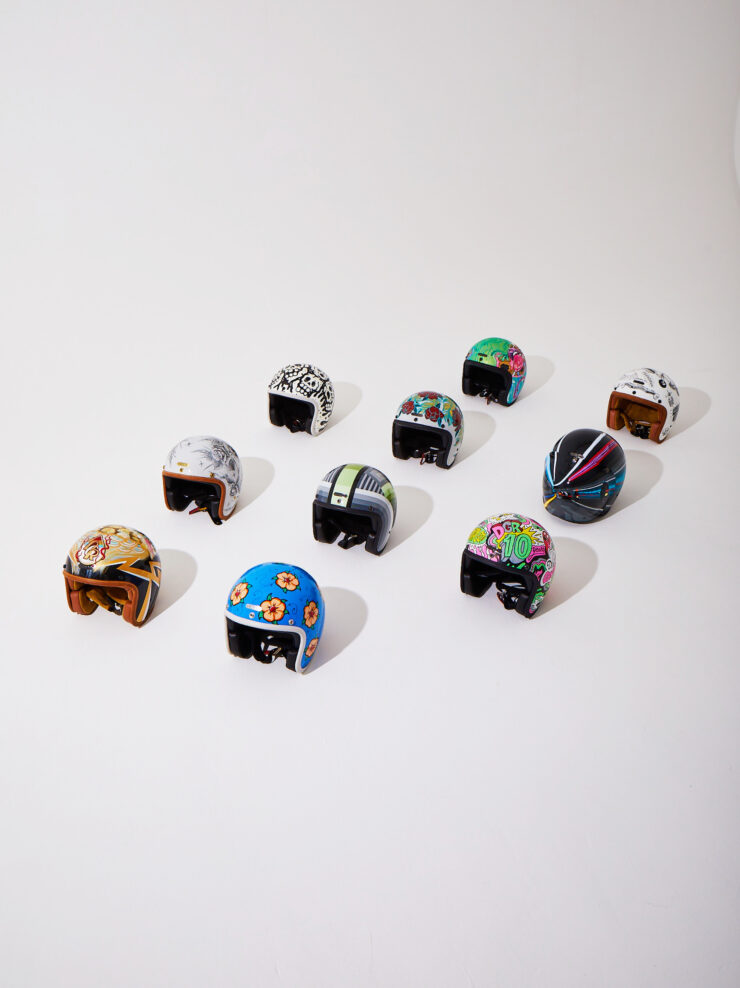