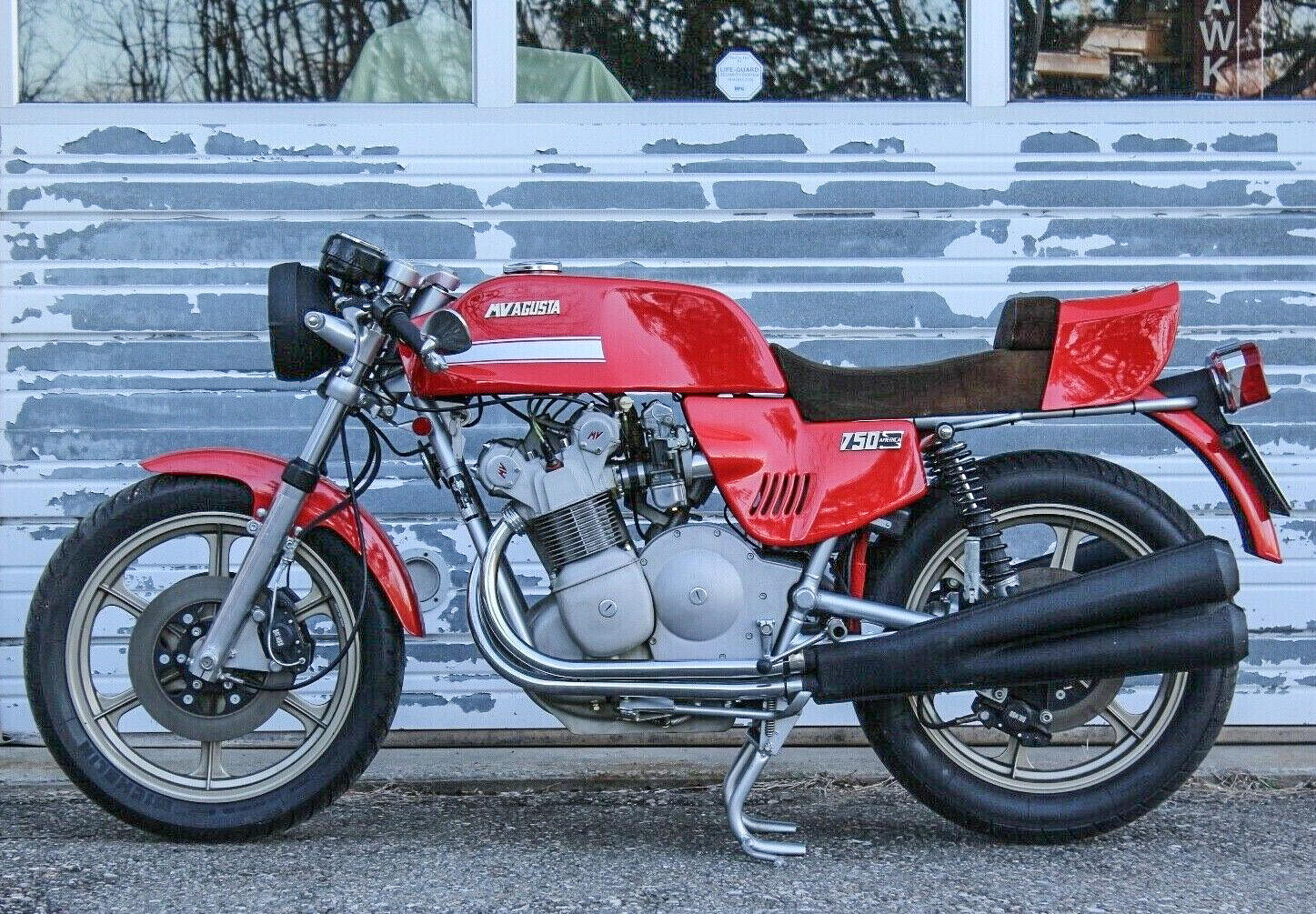 The MV Agusta 850SS represents a high point of Italian multi-cylinder road bikes, it was released in 1977 and today it’s one of the most desirable road-going MV Agustas of all time.

After the end of the Second World War MV Agusta needed to find something to do with themselves as they were banned from their previous occupation of aircraft manufacturing. Motorcycle manufacturing was chosen as it was clear that Italy (and Europe as a whole) were going to need motorized transport after the war, and due to strict austerity measures most couldn’t afford a car.

In order to make a name for themselves MV Agusta hired in some of the best motorcycle engineers in Italy and they set to work build a race team. Many Italian racing motorcycles of the era were remarkably advanced for the time, using multi-cylinder, gear driven single or double overhead cam designs that look almost like high-end Swiss watches when you open them up. 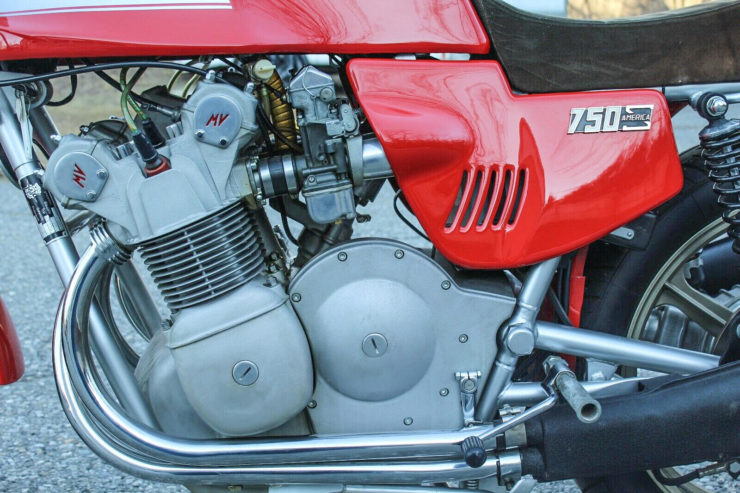 While the British and the Americans were having no small amount of success with their single and twin cylinder pushrod engines the Italians were building far more sophisticated machines, this sophistication meant they weren’t always entirely reliable but when they worked they often won.

MV Agusta relied on a series of air-cooled inline four cylinder engines with double overhead cams, two valves per cylinder, and excellent power-to-weight ratios. It’s believed by many that these Italian engines didn’t go unnoticed by the major Japanese motorcycle manufacturers. Honda would release the CB750 in 1968 with an air-cooled, overhead cam, transversely mounted engine which essentially created the UJM or Universal Japanese Motorcycle – leading to the demise of many of Europe’s great motorcycle marques including MV Agusta.

MV Agusta would dominate Grand Prix racing from the 1950s and into the 1960s, winning 17 consecutive 500cc world championships – a record that stands to this day. Surprisingly the company had been sluggish when it came to building road-going versions of their race bikes to capitalise on their successes – largely due to paranoia about their designs being stolen. This was the same reason that many retired MV Agusta race bikes were destroyed rather than sold to enthusiasts or collectors. 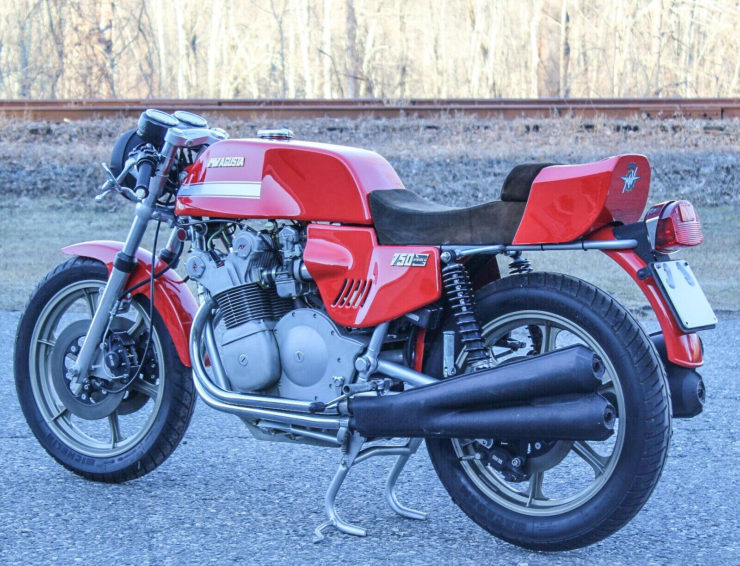 This paranoia meant that their forays into consumer-level four-cylinder machines were deliberately hamstrung by their own design, resulting in the somewhat unattractive MV Agusta 600. Despite it looks and its lack of sales success the 600 was the world’s first production motorcycle with a transverse four cylinder engine.

Other, far more attractive motorcycles would follow in the footsteps of the 600 including the MV Agusta 750 Sport and MV Agusta 750 Sport America. The MV Agusta 850SS was essentially an MV Agusta 750S that had been through a conversion to increase the engine size to 837cc, with a few other modifications including new cams and larger carburettors to further improve performance with a new power output of 85 horsepower at 9500 rpm.

Most conversions were done at the factory however some were done at dealerships, it’s not exactly known how many were converted but we do know the numbers are very small, some say only 19 were created but other estimates are as high as 42. 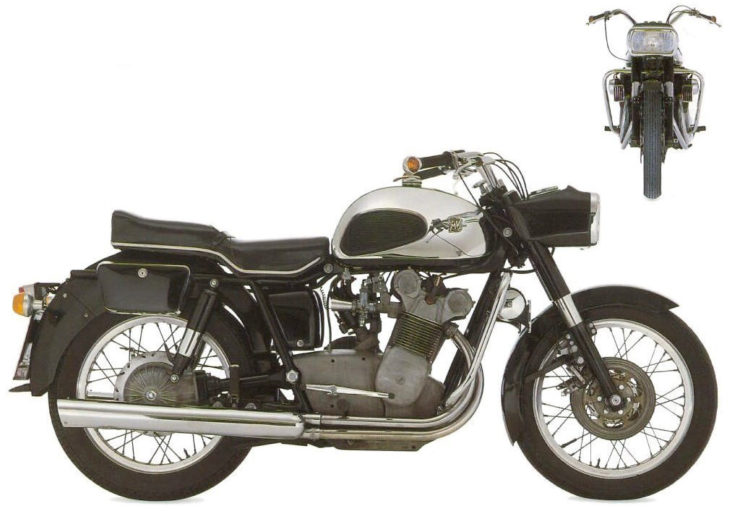 Above Image: The interesting though aesthetically challenged MV Agusta 600.

Very few of these originals have survived to the modern day, of the survivors the most desirable are the ones that were built at the factory in Italy with supporting paperwork and known history from new – like the example you see pictured here.

This bike is an original 2800 mile example in good overall condition with the factory-optional cast wheels, Lafranconi exhaust, and its original suede seat. It has matching frame and engine numbers and it’s never been restored, remaining as it was when it was built by the factory back in the late 1970s.

Although $100,000 USD is a lot of scratch to spend on a single motorcycle there are some that are worth it, and this is certainly one of them, alongside other marques like Crocker, Vincent, and Brough Superior. 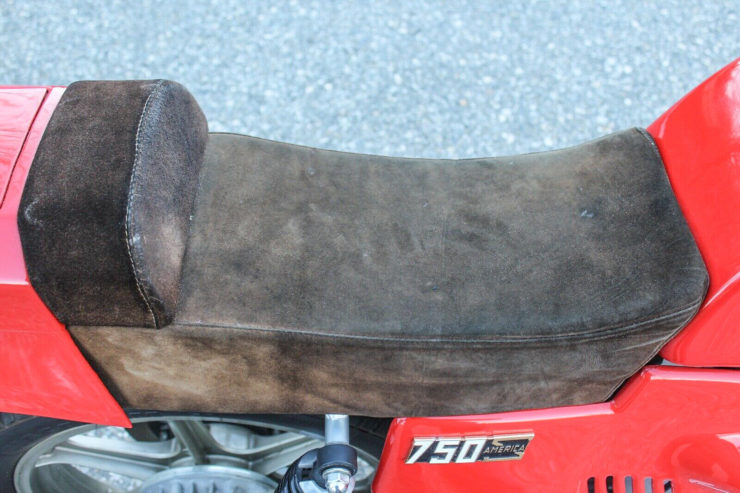 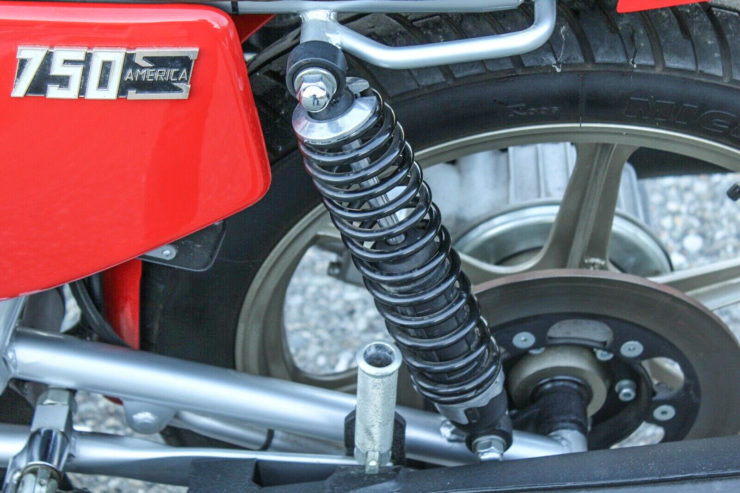 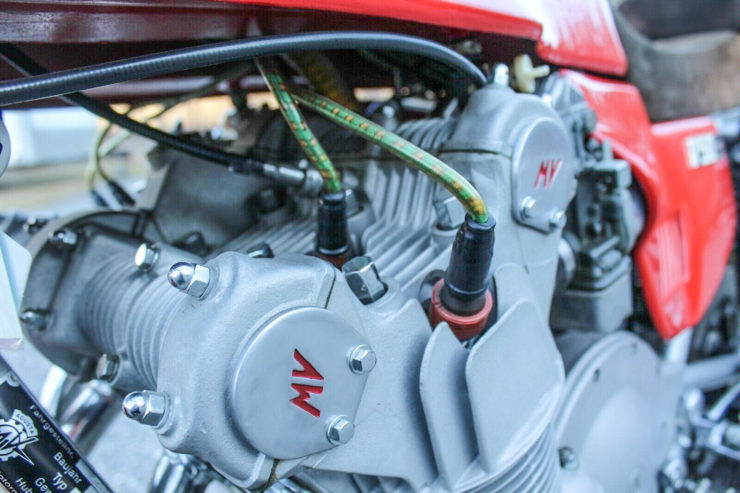 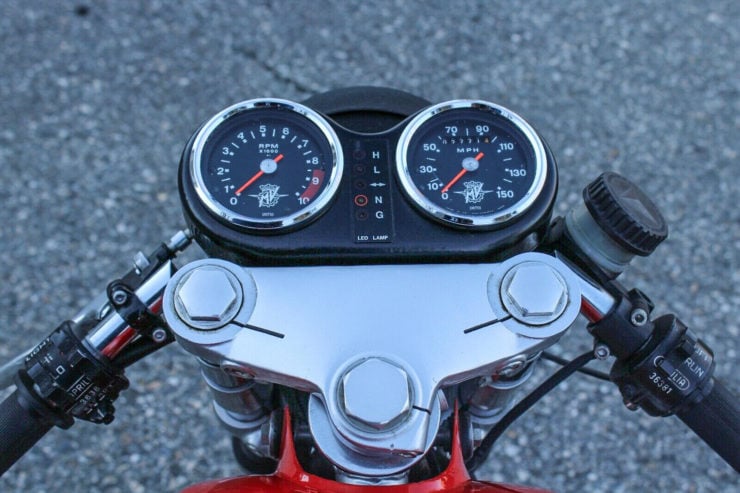 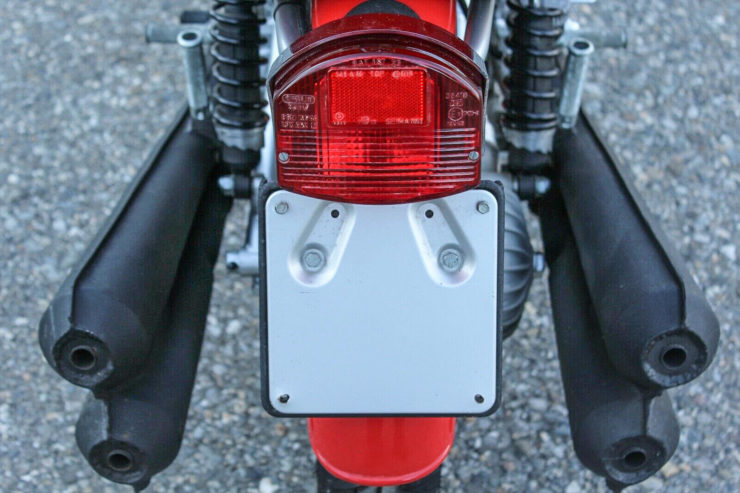 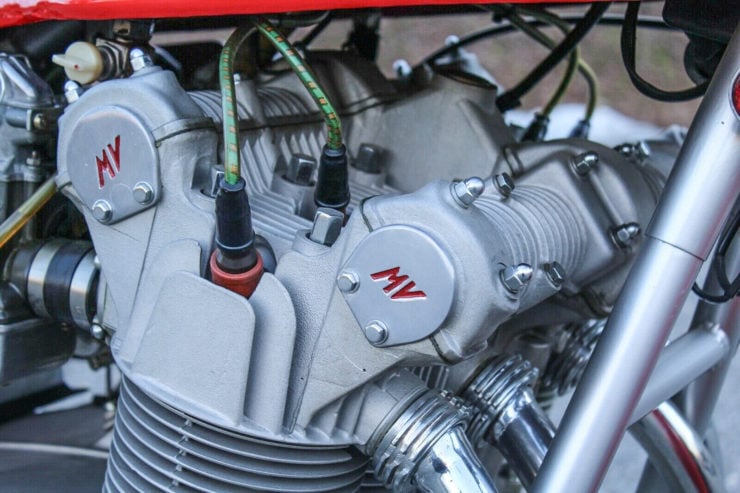 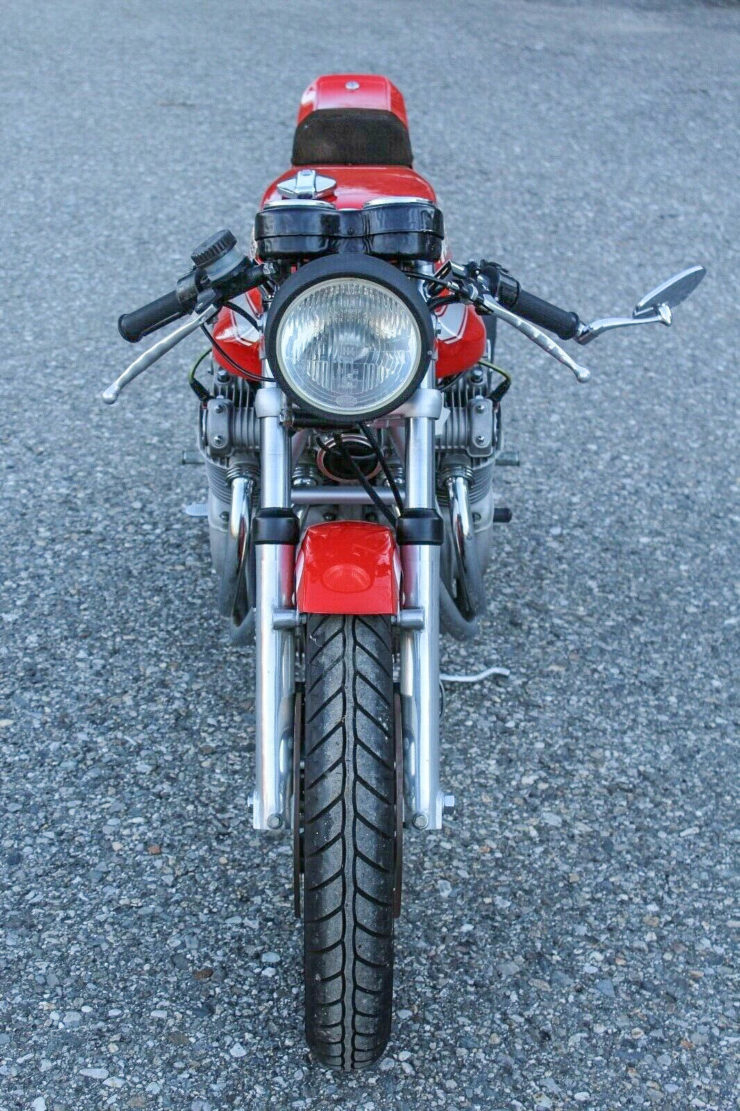 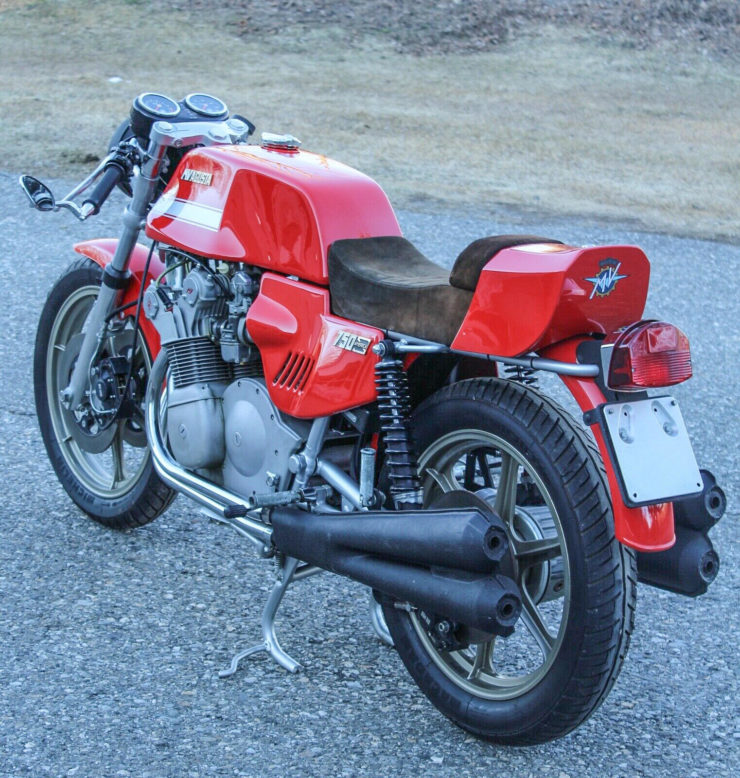 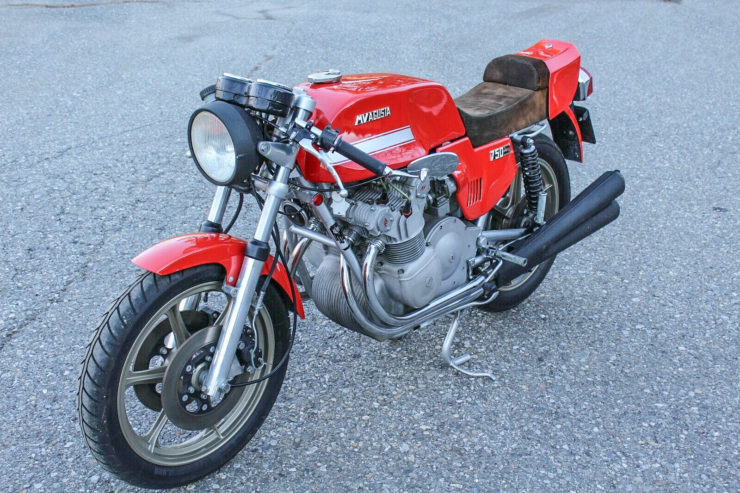 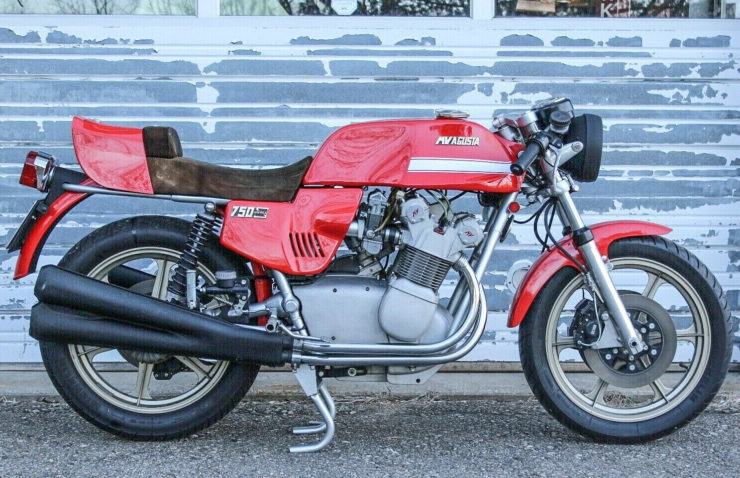 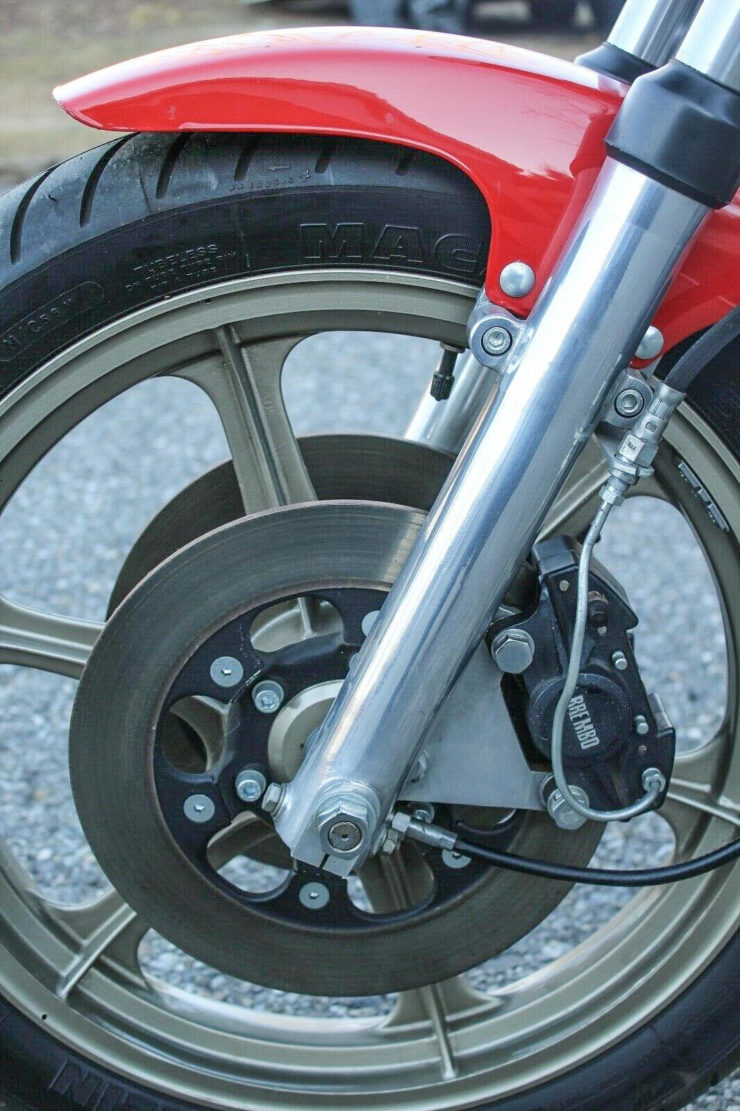