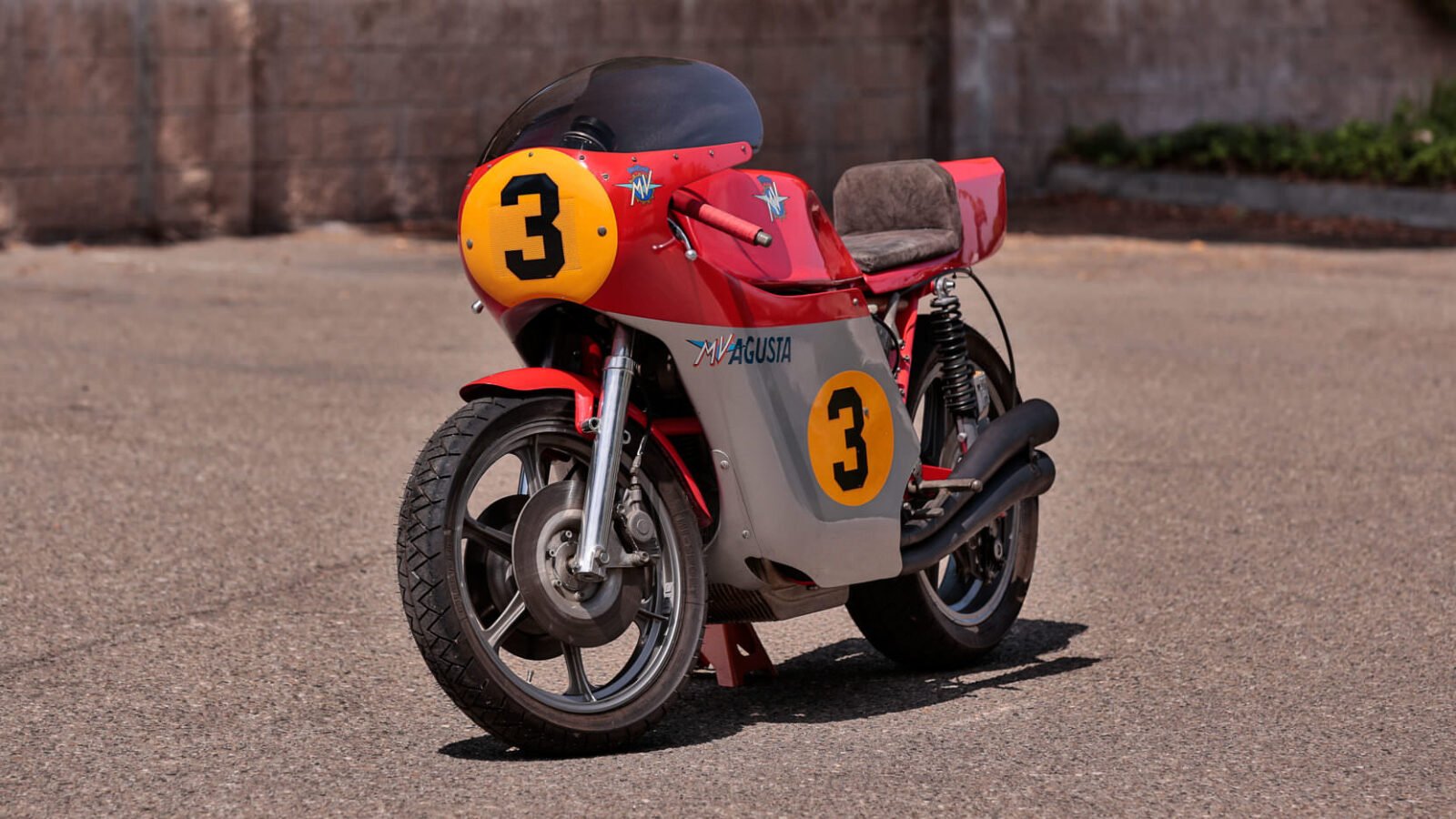 The MV Agusta 850SS was the last, the largest, and the fastest of the MV Agusta 4-cylinder road machines from the 1970s. In fact it was one of the fastest production road-going motorcycle in the world in 1977 with a top speed of 150+mph and between 85 and 95 hp on tap, depending on who you believe.

A Brief History of MV Agusta

The name Agusta was originally associated with aircraft, Giovanni Agusta founded his company in 1907 and aircraft production peaked during the First World War. After his death in 1927 Giovanni’s widow Giuseppina and son Domenico took the reigns and diversified the Agusta brand into the world of motorcycles.

Demand for two-wheeled transportation in Italy has always been strong, and after WWII Domenico Agusta established a company to focus on motorcycles full-time – Meccanica Verghera Agusta.

Much like their 4-wheeled compatriots over at Ferrari, MV Agusta were focussed on racing from the start, and success came quickly. 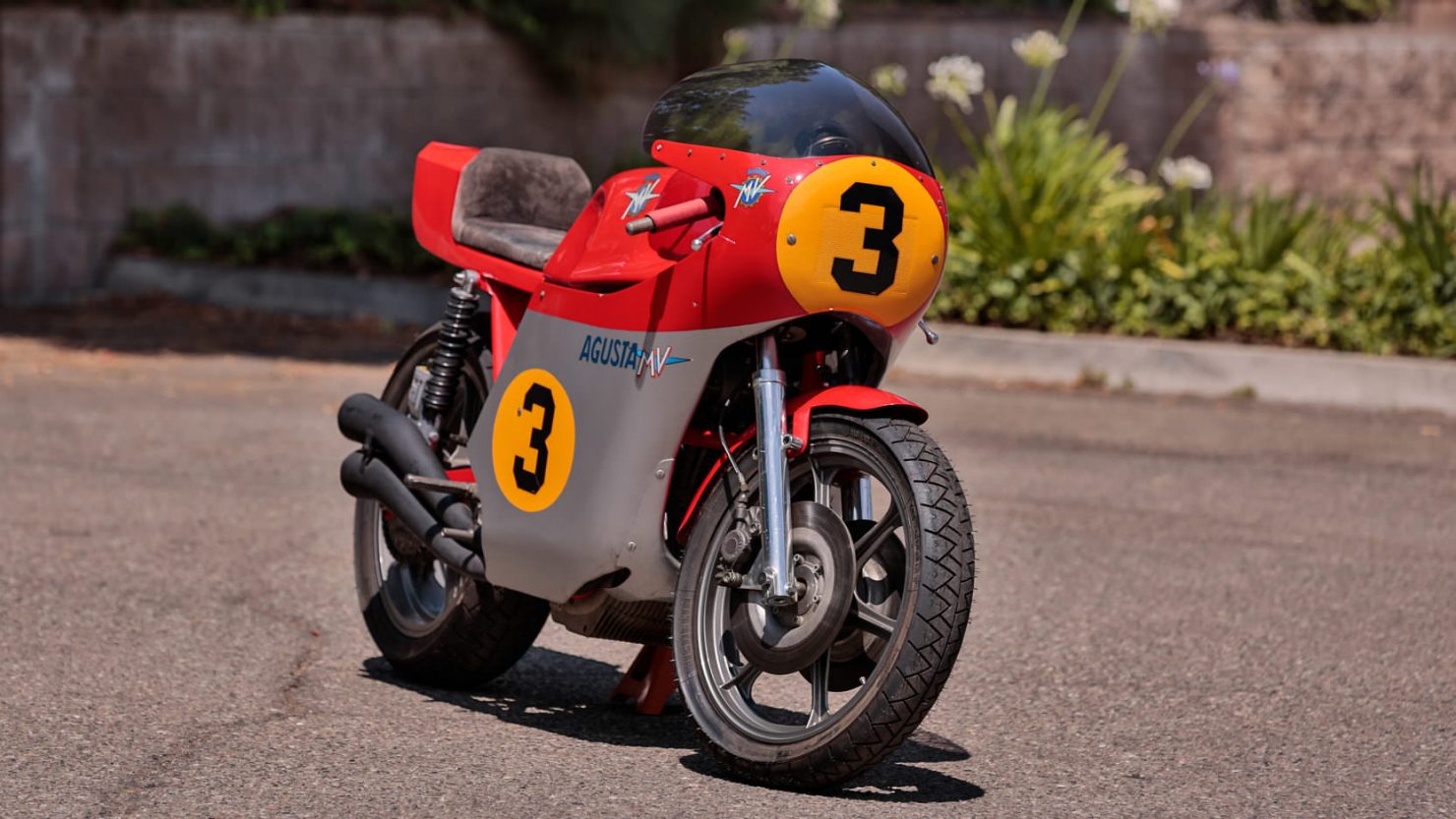 MV Agusta became famous quickly for their advanced, high-performance motorcycle engines, the largest of which would evolve from the inline-4, DOHC engine designed by Piero Remor and first installed in an MV in 1950.

Iterations of this engine would remain in production for racing till 1966, eventually being replaced by a triple, then with a new inline-4 in 1973 – which won MV Agusta’s final two 500cc world titles in 1973 and 1974.

The first street bike to get the MV Agusta inline-4 DOHC engine was the oft maligned MV Agusta 600. Nicknamed the “Black Pig” thanks to its looks and color, the heavyweight 600 had a rectangular car headlight, a shaft drive, a measly 50 hp, and very few buyers. Just 127 were made, but today they’ve acquired cult classic status and collectors hunt them down.

After much arm twisting, Count Domenico Agusta finally agreed to manufacture a performance street bike with the much sought after inline-4. The MV Agusta 750S was released in 1970 just a year before the Count passed away. As the model name suggests it had a 750cc capacity, four 24mm Dell’Orto carburettors, and 66 hp at 8000 rpm. 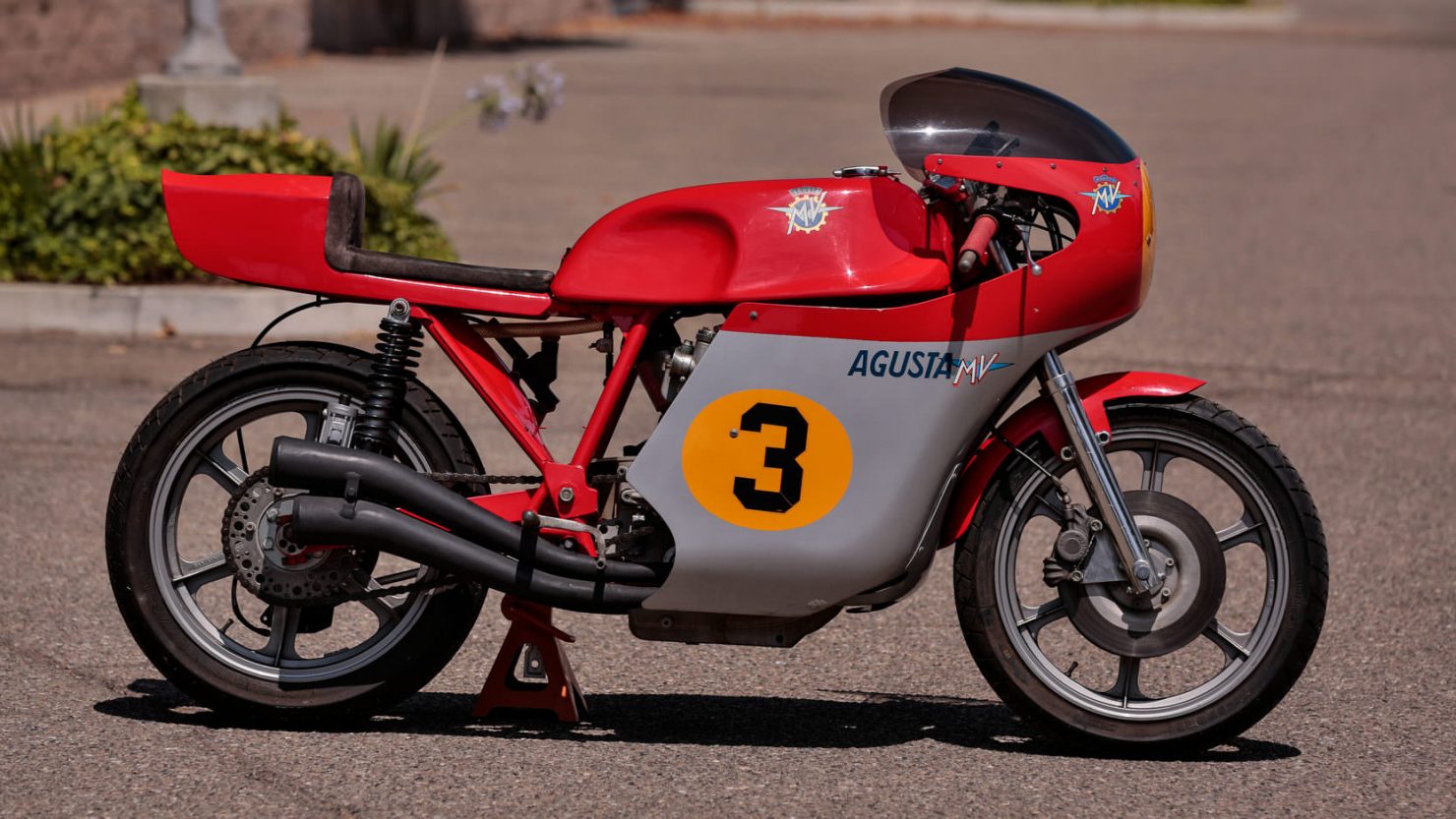 The 750GT was released in 1972 with revised touring-oriented bodywork and handlebars. It wasn’t popular, and just 50 were sold. The 750S made a comeback in 1974 with Scarab dual-disc front brakes, improved cam timing, bigger valves, and ports, 4 27mm Dell’Orto carburettors, and 69 hp at 8,500 rpm.

After being convinced by their US importers that a market existed for a superbike to take on the Japanese, the MV 750 America of 1975 – 1976 was developed. It featured a left-side shifter, a new more angular gas tank with matching side panels and a suede-seat with a nifty hidden storage space under the prominent bump-stop rear, 4 26mm Dell’Orto carburettors, and 75 hp at 7500 rpm.

Sadly the importers were wrong, and the MV America sold in relatively limited numbers largely due to the increasing competition from far cheaper Japanese superbikes. 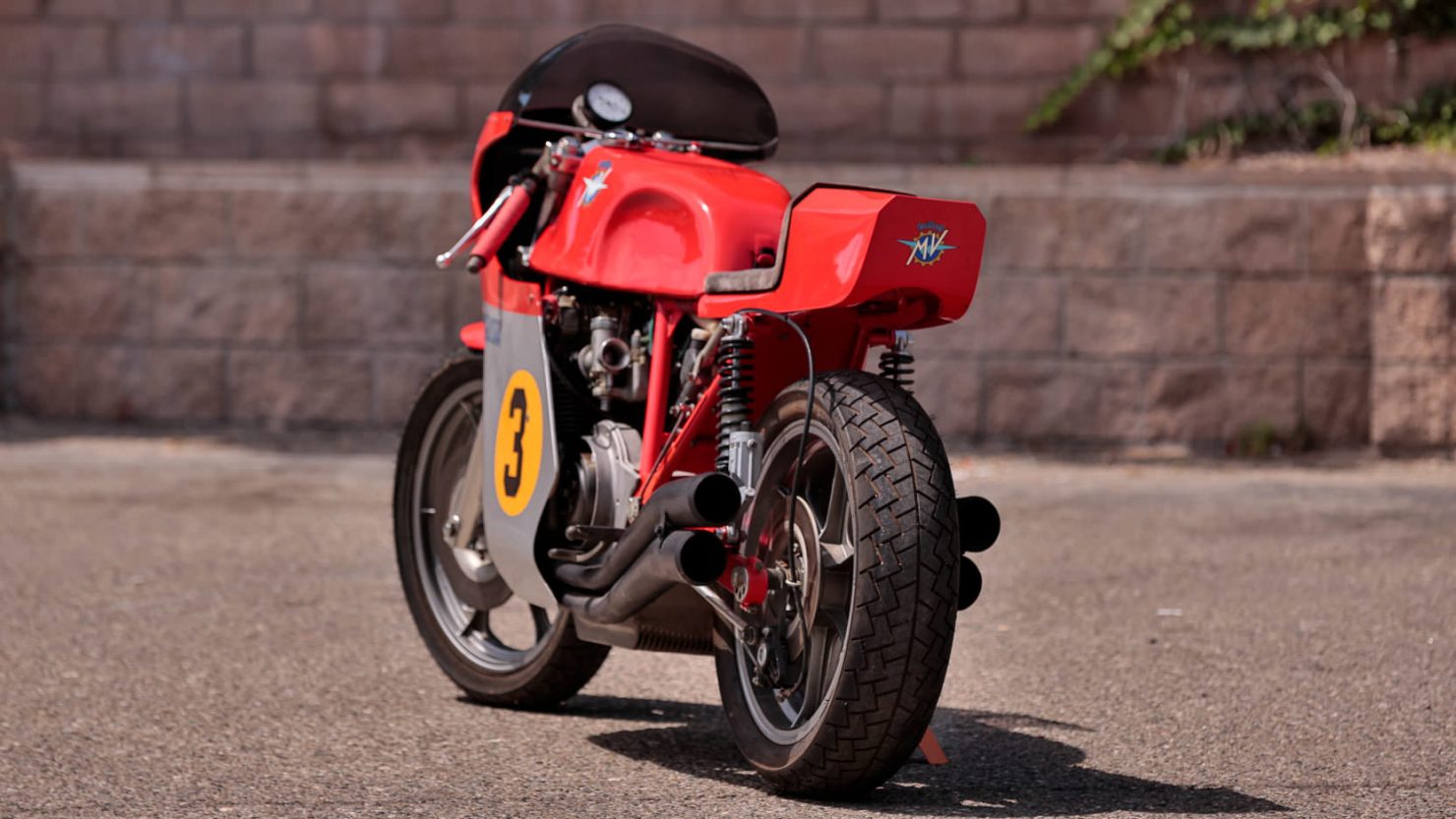 The final swing MV Agusta took at the superbike market was too expensive to ever sell in significant numbers, but today over 40 years later it’s remembered as one of the most impressive Italian motorcycles of the era.

A new set of twin Brembo discs were fitted up front with a matching Brembo in the rear, and the bike featured classic MV Agusta styling that paired a curvaceous fairing with the angular fuel tank, side covers, and seat of the America. 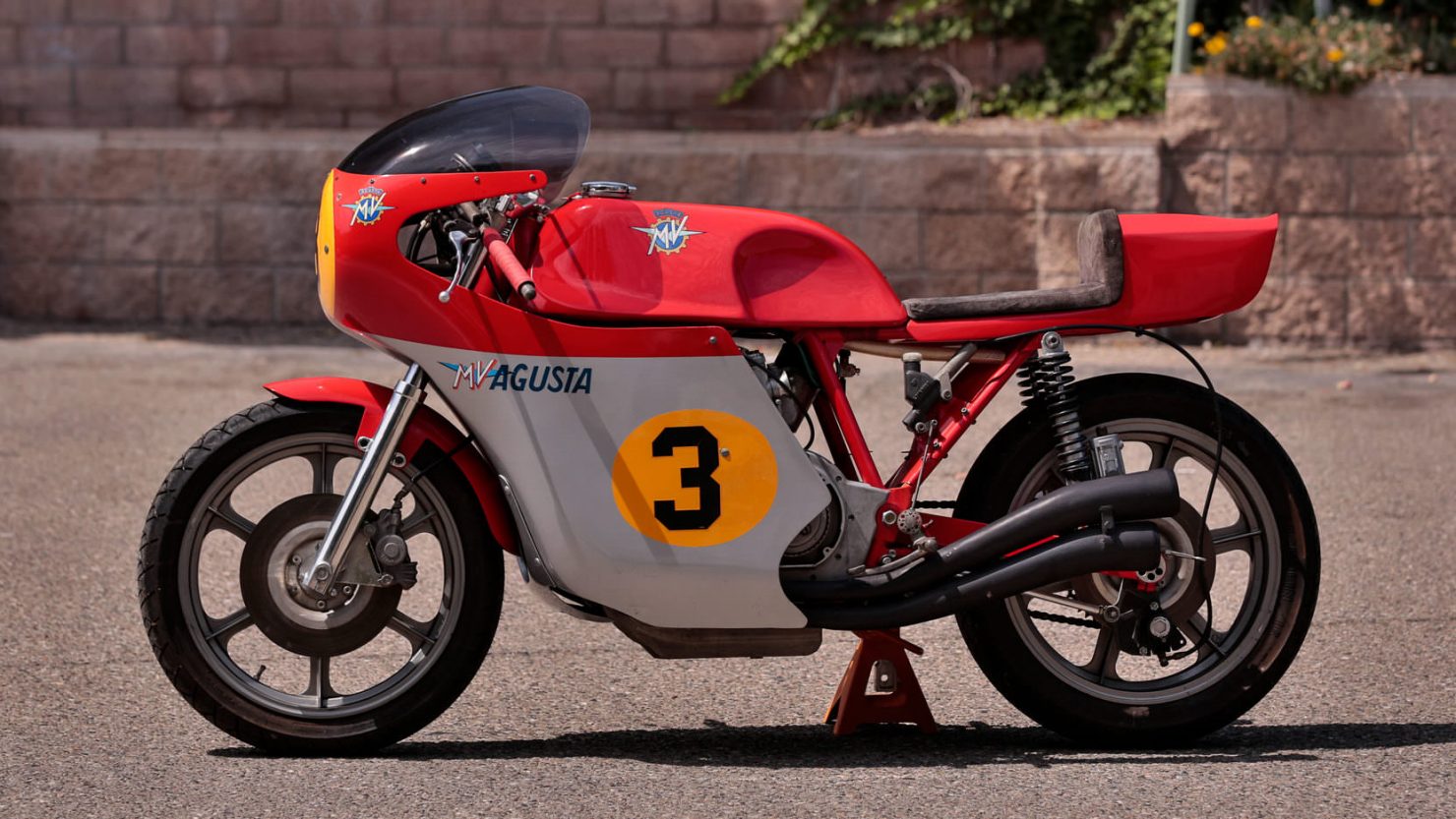 The 850SS you see here was previously on display at the Virgil Elings Solvang Museum in California and interestingly it’s been signed by factory riders Giacomo Agostini and Phil Read.

A previous owner modified the bike for competition use, and it’s now fitted with Lockheed front brakes, Dell Orto SS31 carburettors, a dry clutch, a magneto ignition, a Magni chain-drive conversion, and a 14,000 rpm tachometer.

It’s due to be sold by Mecum at the Monterey Auction between the 16th and 19th of August, if you’d like to read more about it or register to bid you can click here to visit the listing. 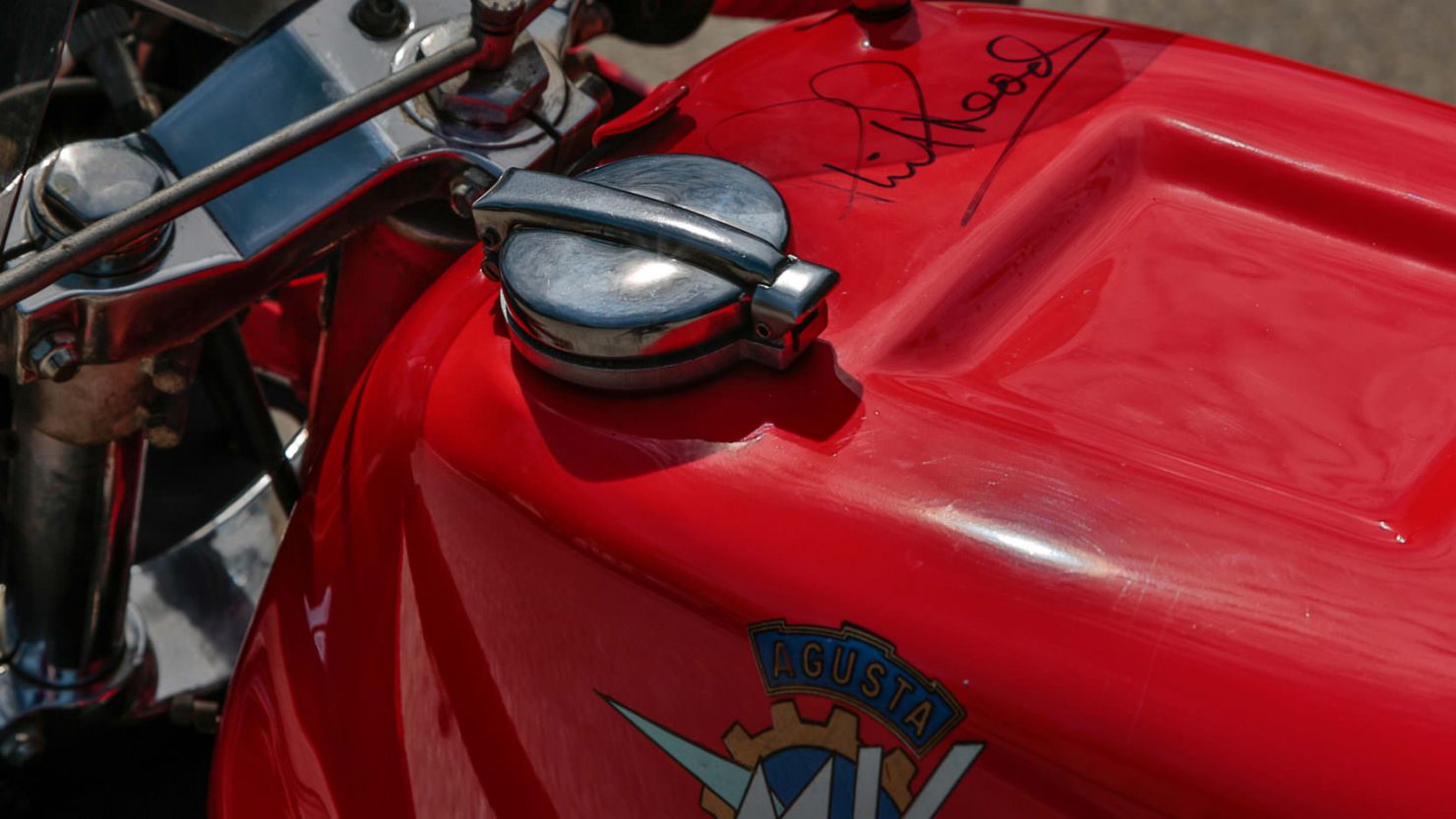 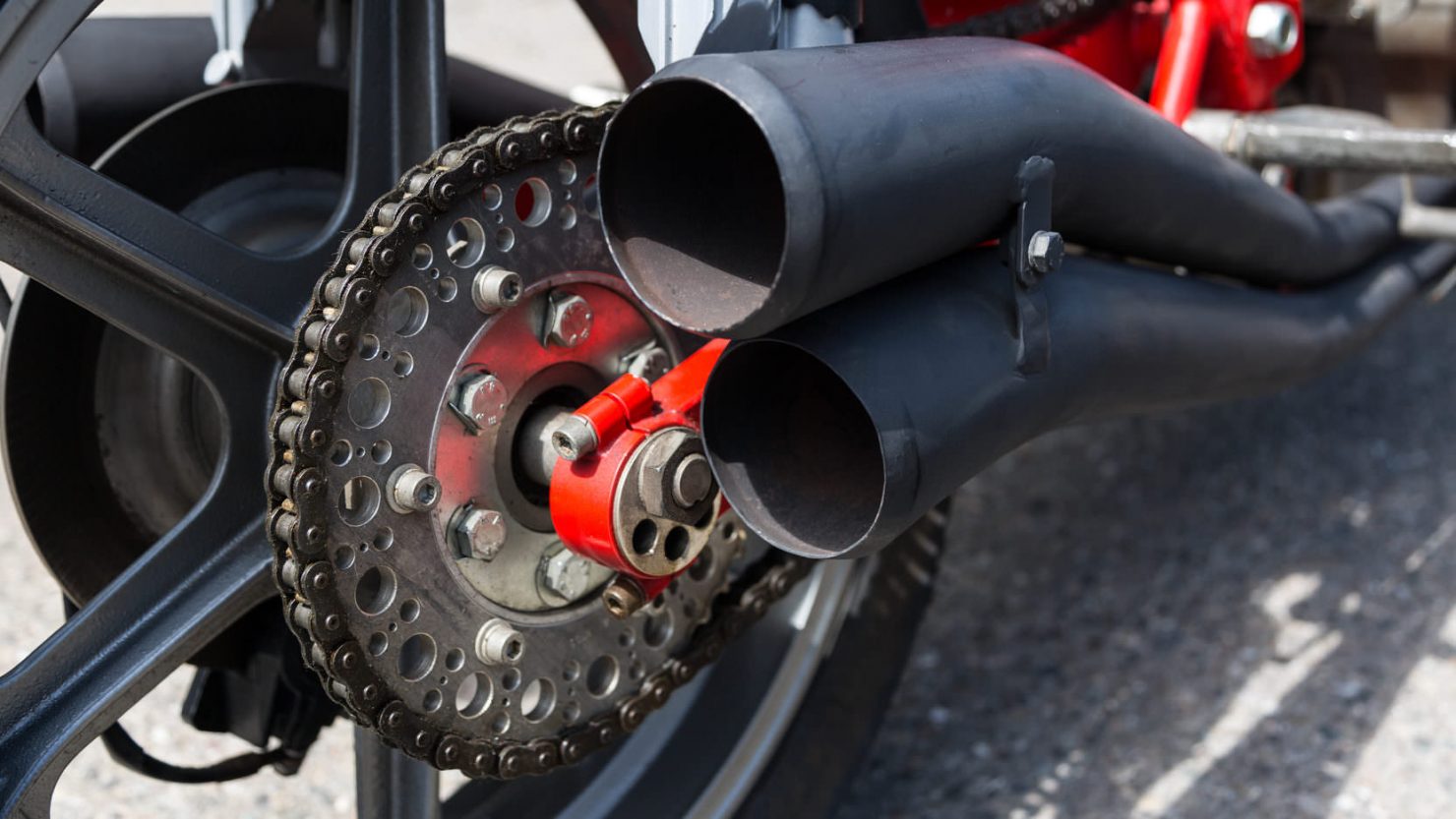 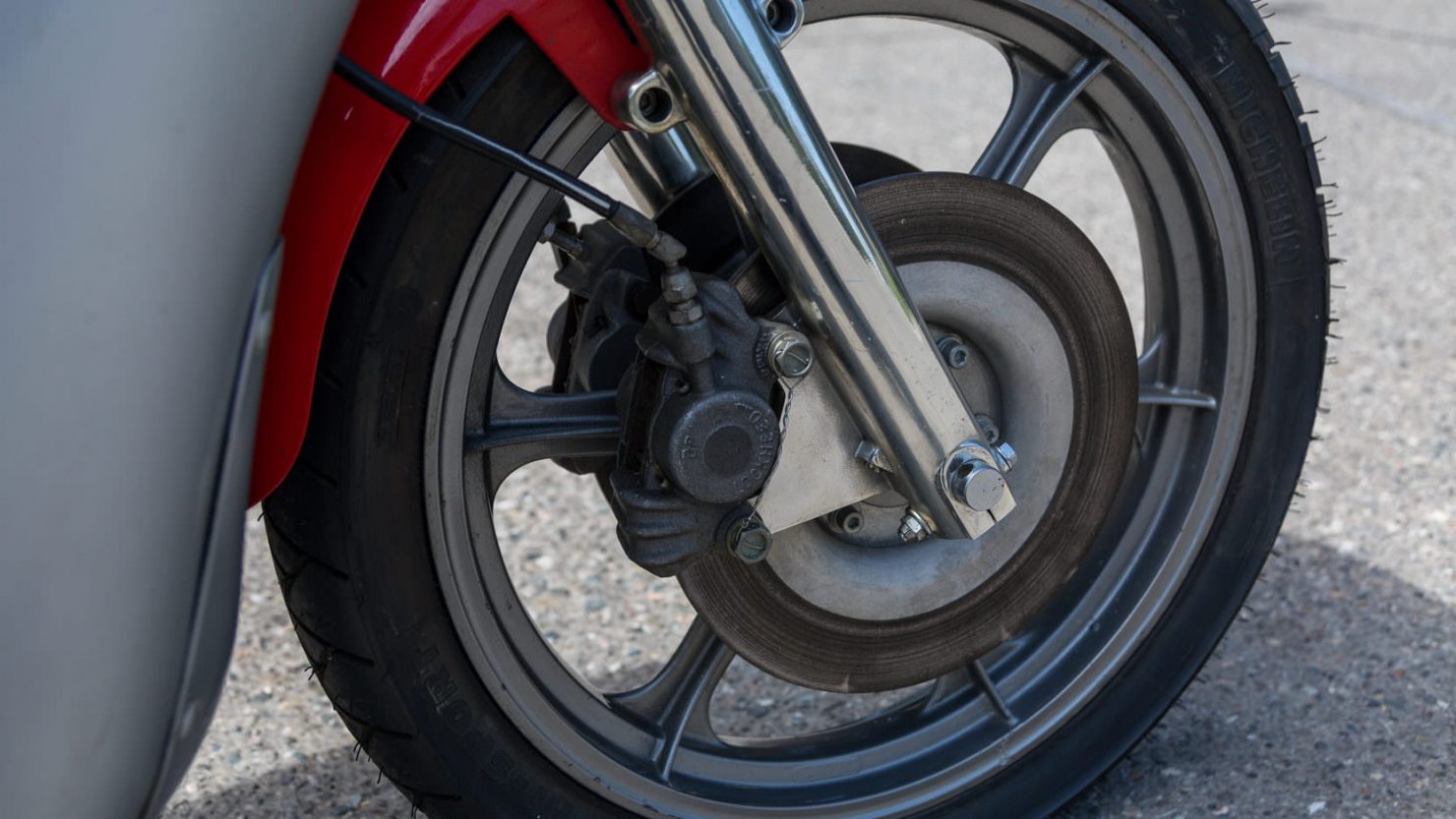 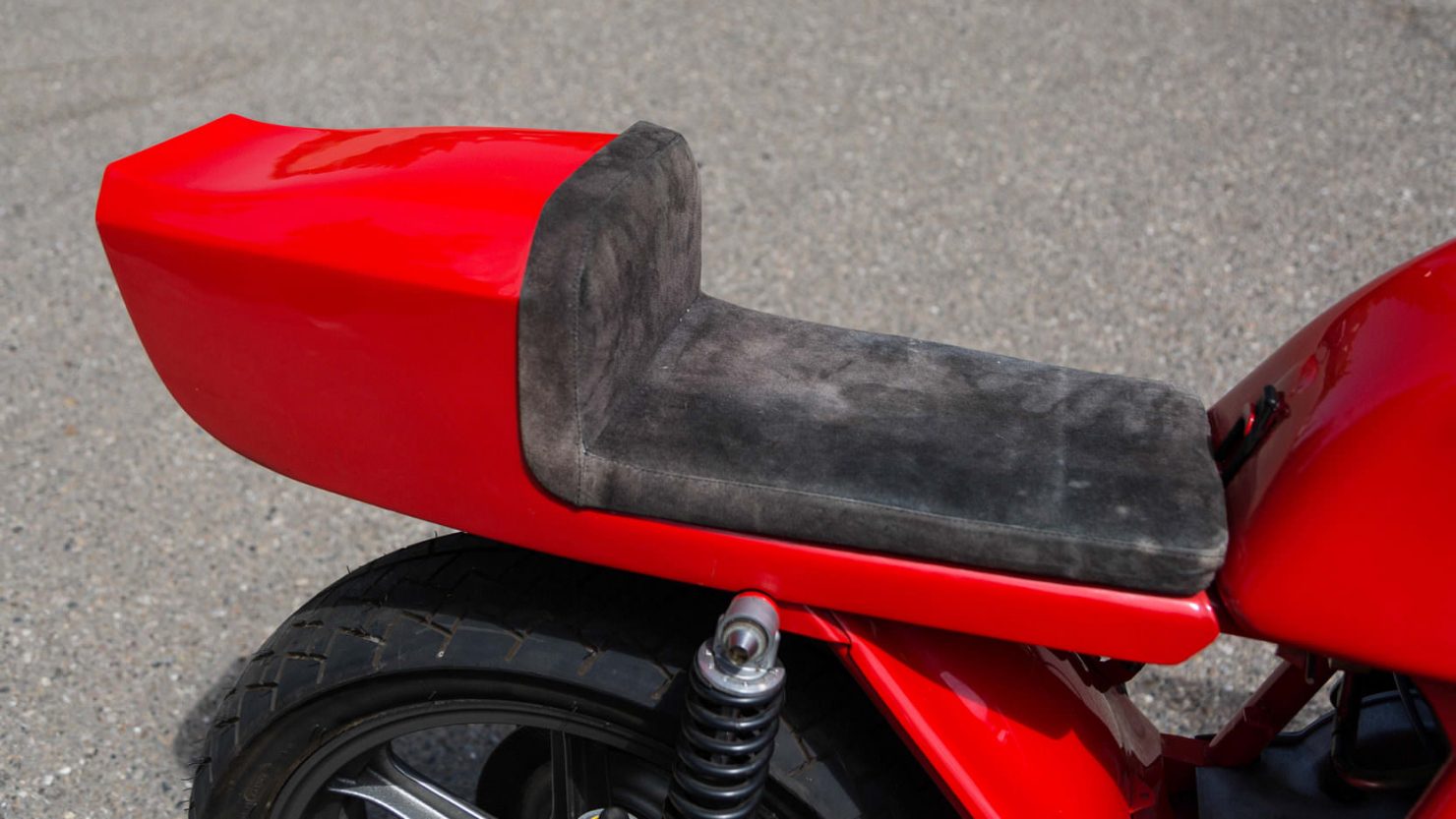 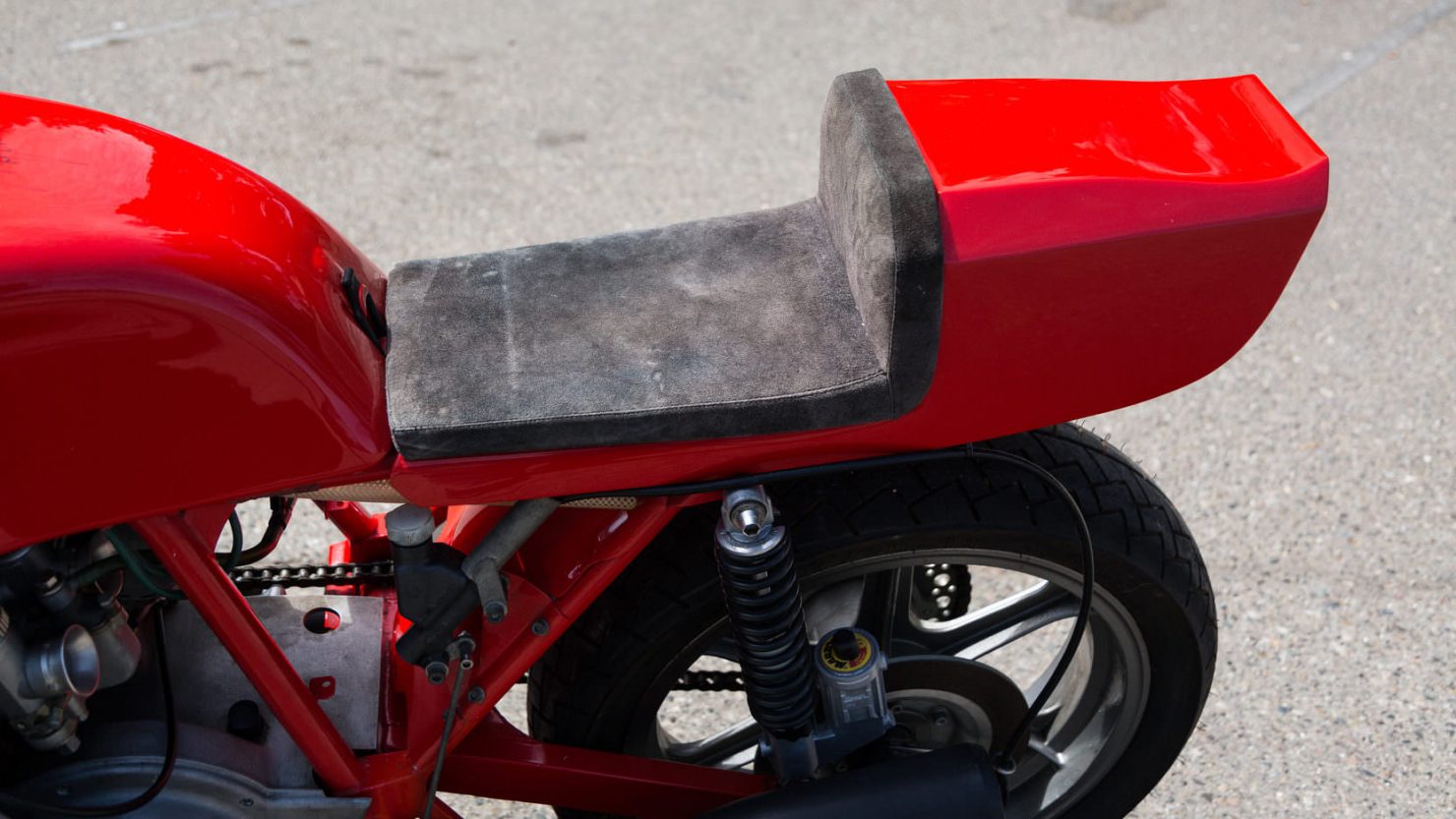 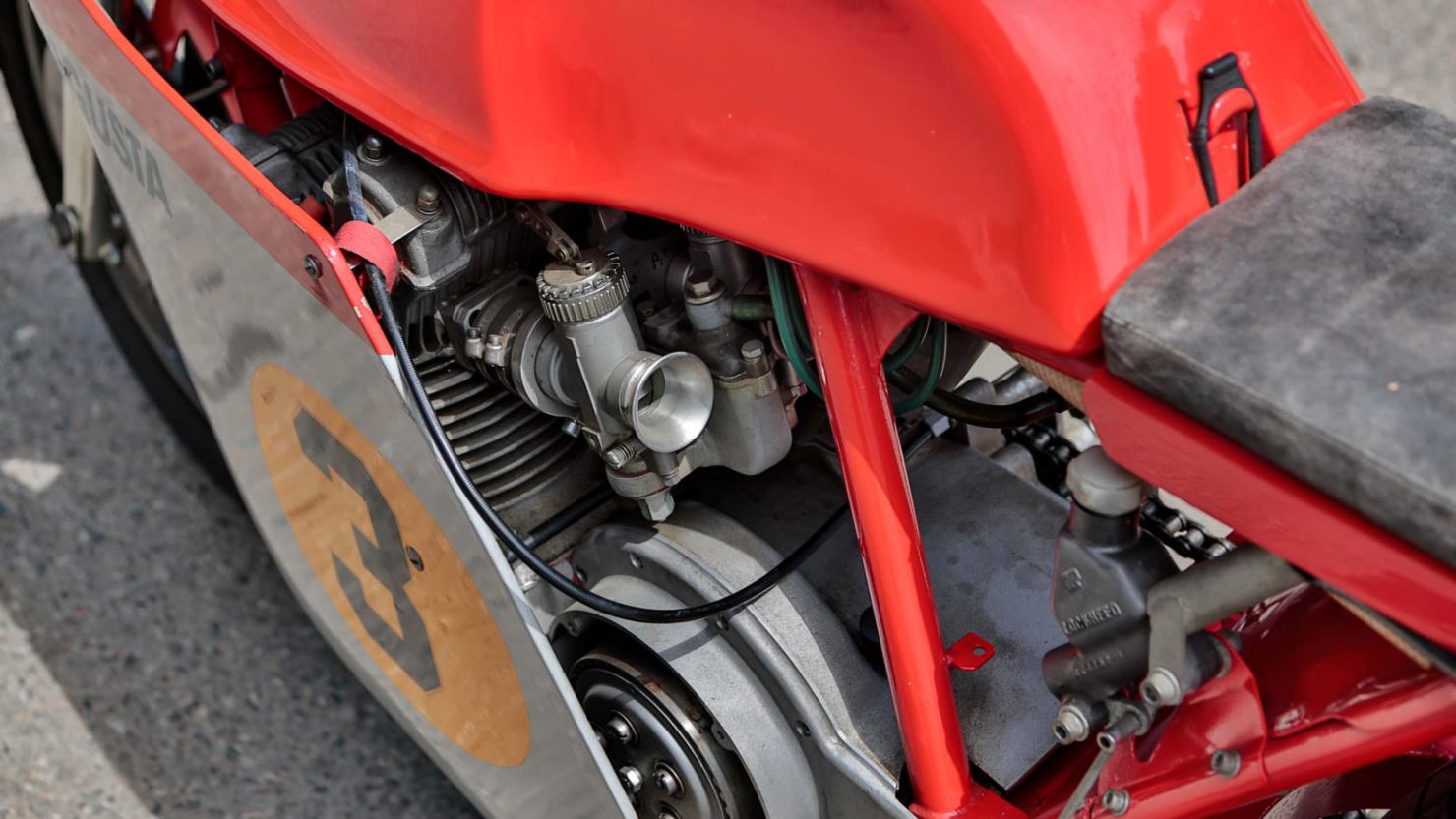 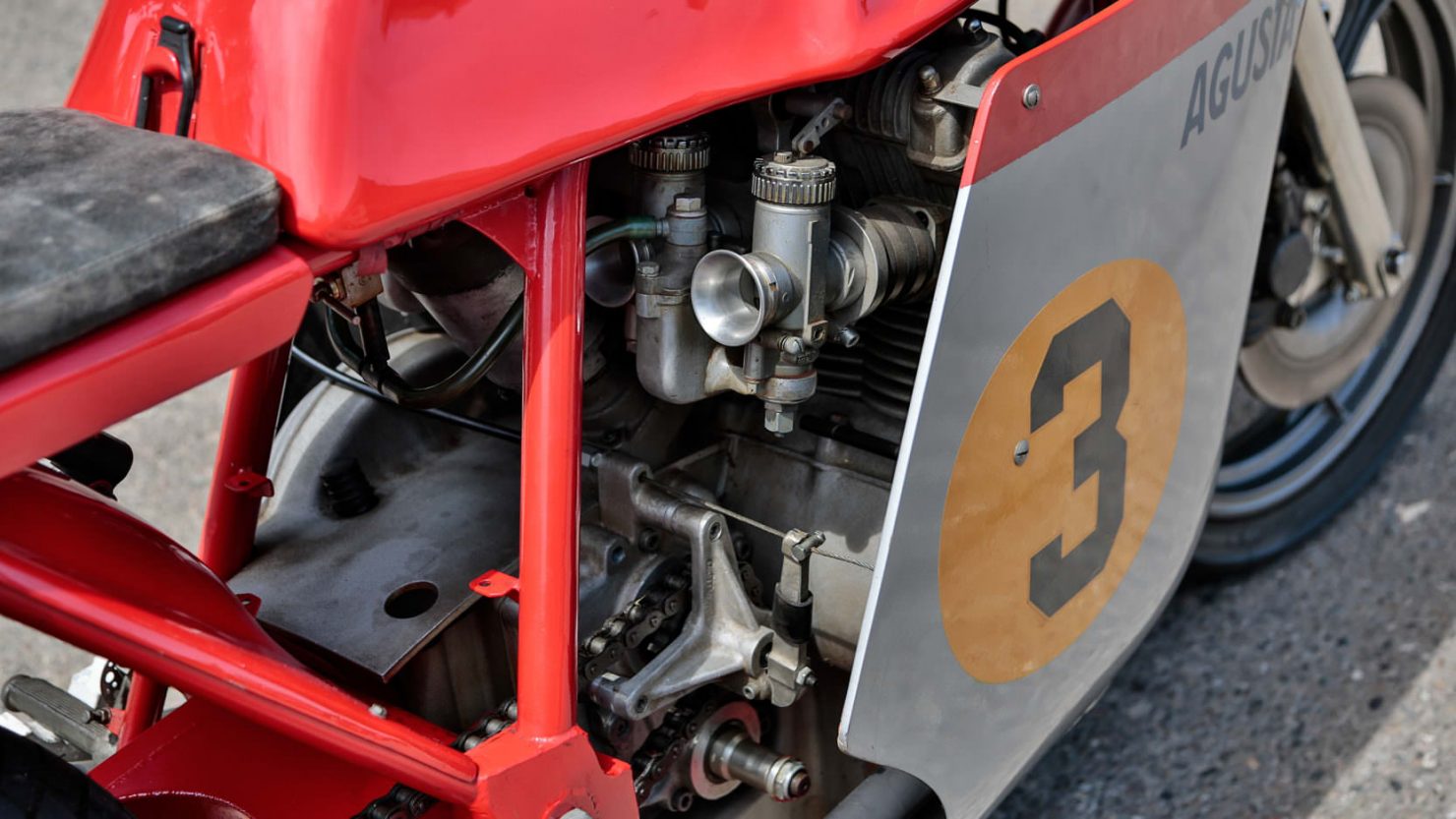 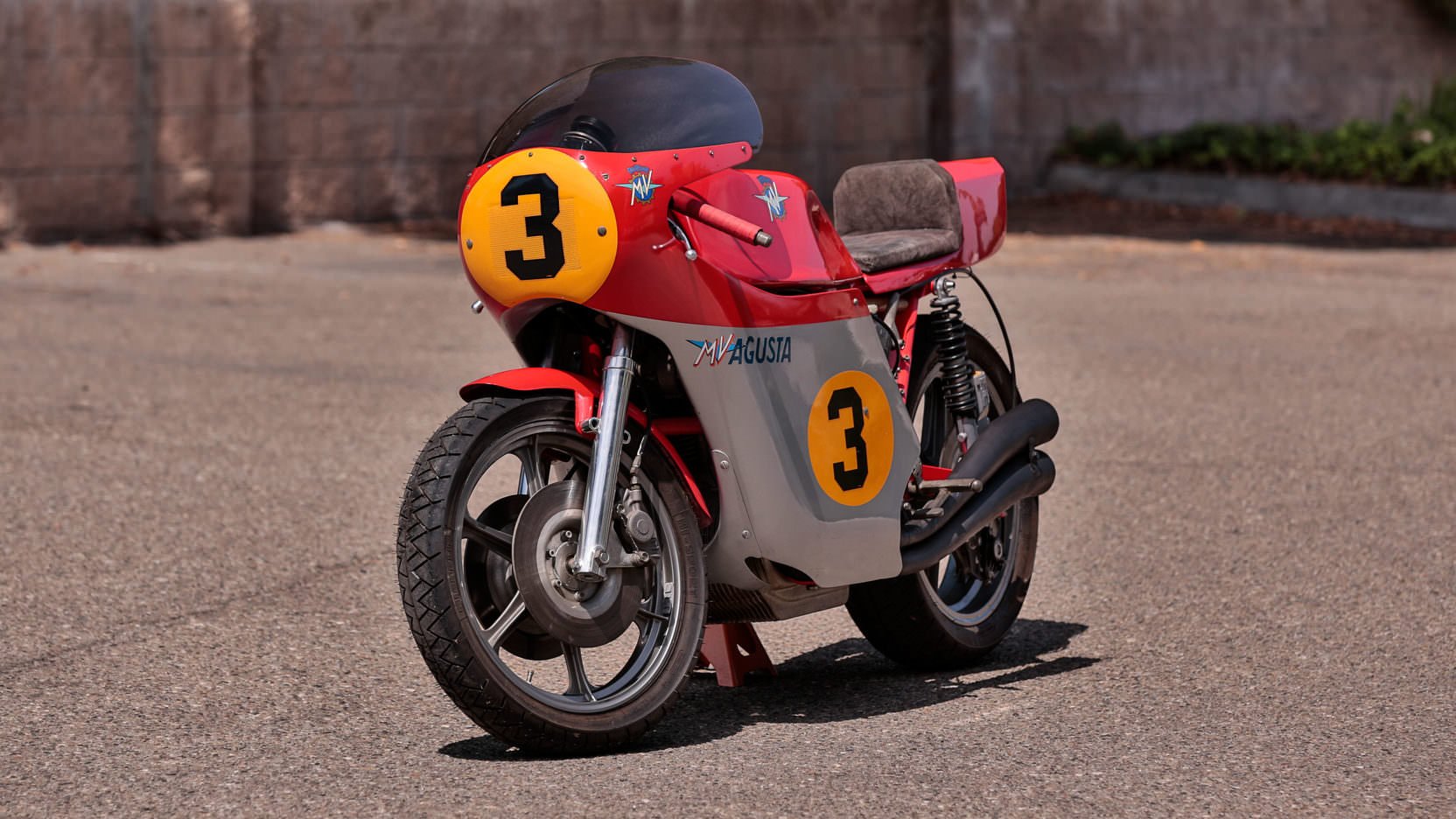