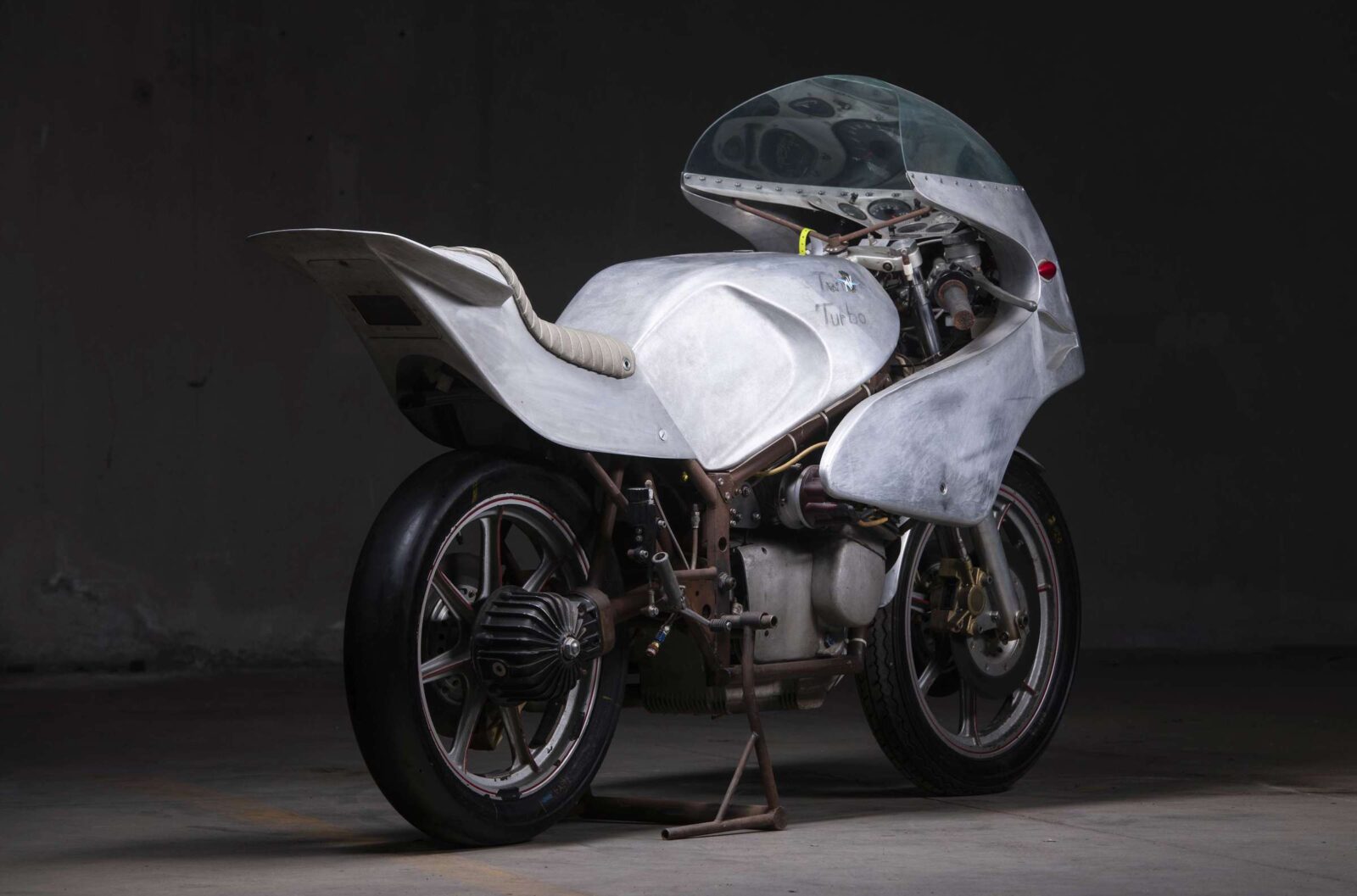 This rather unusual motorcycle is the 1975 MV Agusta 750 Turbo Prototype, it was built as a proof-of-concept for a possible future production model, though of course this production model never appeared.

It’s interesting to consider what might have been if MV Agusta had worked out the bugs and managed to get this bike into dealerships. The two-strokes had been asserting themselves in top level motorcycle racing for a few years, and it’s possible that the engineers at MV were looking for new ways to compete using their pre-existing four-stroke engines.

The Japanese would experiment with turbocharged motorcycles in the late 1970s and 1980s, but this prototype pre-dates them all. Forced induction on motorcycles has always been an engineering challenge, turbo lag can make high-performance motorcycles almost unrideable at the limit, and there’s very little room to fit the required ducting, turbochargers, and intercoolers (if used). 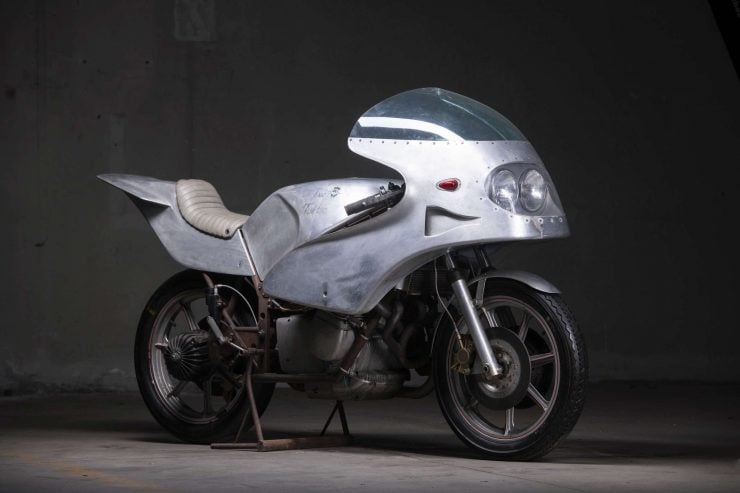 The 750 Turbo Prototype is fitted with an 830cc version of the MV Agusta 750cc inline-4 cylinder DOHC engine. The engineers knew that heat was going to be an issue, so they raided the aerospace parts bin for a special heat-dissipating plasma coating that was used on the cylinder head and lightweight pistons.

Sodium-filled exhaust valves were fitted, titanium intake valves were used, and a bespoke set of four titanium connecting rods were fabricated and installed. A new clutch was made to handle the increased forces that it would encounter, the clutch also made use of the heat-dissipating plasma coating.

A new exhaust manifold was fabricated and in order to alleviate turbo lag as much as possible, two turbos were used, one for low-RPM operation and one for high-RPMs. The engine made use of mechanical fuel injection and a digital ignition system, maximum rpm was set to 10,000 and the listing explains that the compression was 12.5:1 – though this seems unusual for a forced induction engine, even with the 105 octane fuel they were using.

It seems likely that the reason this prototype never made it out of the development phase was heat. Turbos generate significant amounts of heat during operation, and they air they compress is heated far above ambient air temperature. Many turbocharged vehicles use intercoolers to bring the temperature back down, increasing the density of the air in the process. Motorcycles don’t generally have room for bulky intercoolers, and most production turbo motorcycles have done without them.

Braking is handled with twin front rotors and a single unit on the rear, suspension consists of a monoshock rear (fitted up under the tank) and traditional telescopic forks up front. There are twin headlights, twin front indicators, a rear brake light, and a dashboard that looks like something from the space shuttle. 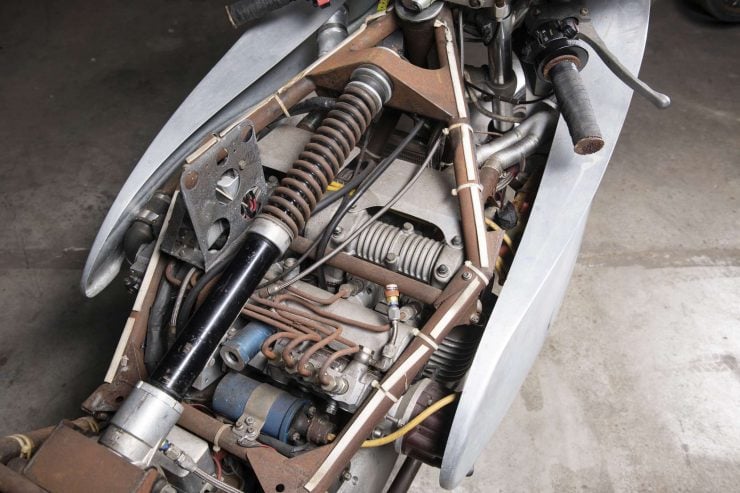 The engineers developed a half-fairing to allow as much airflow to the engine as possible, a fairing was absolutely necessary as the prototype was (apparently) capable of 186 mph (300 km/h) thanks to its 150 hp, and its likely prodigious torque figures. There’s no public record of whether the bike was ever ridden at anything close to these speeds, but you’d be a braver man than me to attempt it, particularly given the brakes, suspension, and tires on offer.

The aluminum fairing and bodywork were all formed with hand tools, the seat and rear bodywork are particularly interesting, featuring a large fin that seems angled to provide downforce on the rear end. A large perspex windshield is riveted into place along with a perspex cover over the headlights.

If you’d like to add the MV Agusta 750 Turbo Prototype to your garage it’s due to cross the auction block with Artcurial on the 9th of February. It has an estimated hammer price of €140,000 and €220,000, due to its historical provenance and the fact that it’s almost certainly the only example in the world, we expect the bidding to be brisk. If you’d like to read more or register to bid you can click here to see the listing. 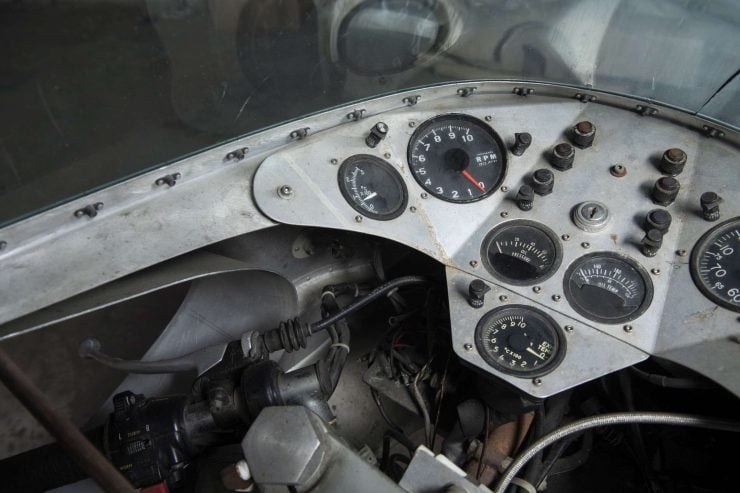 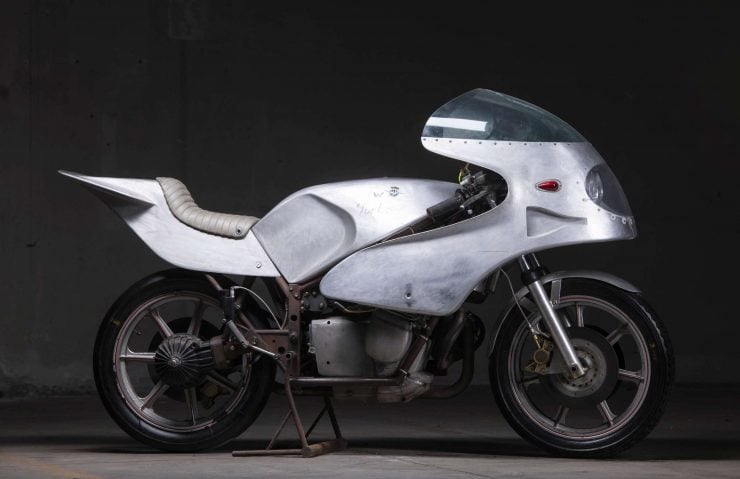 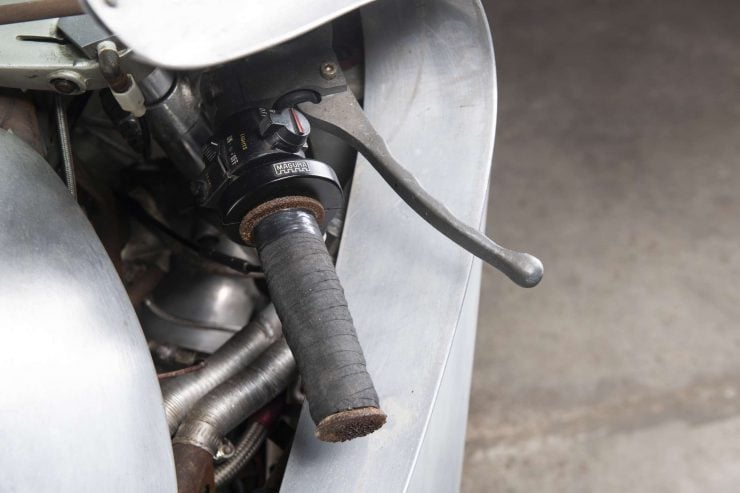 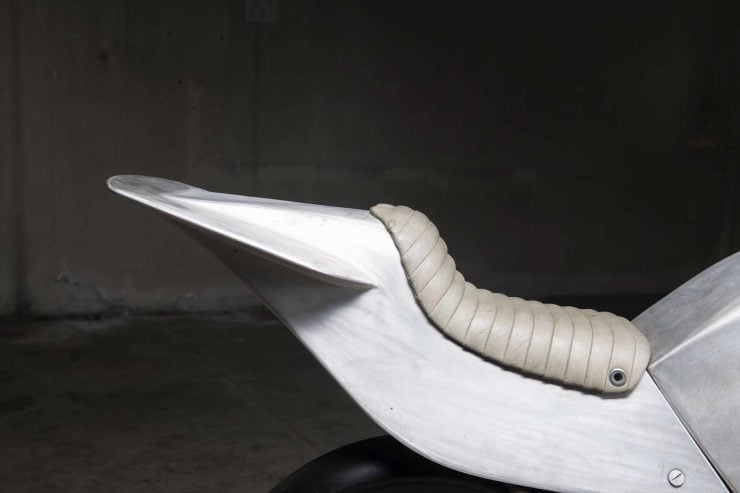 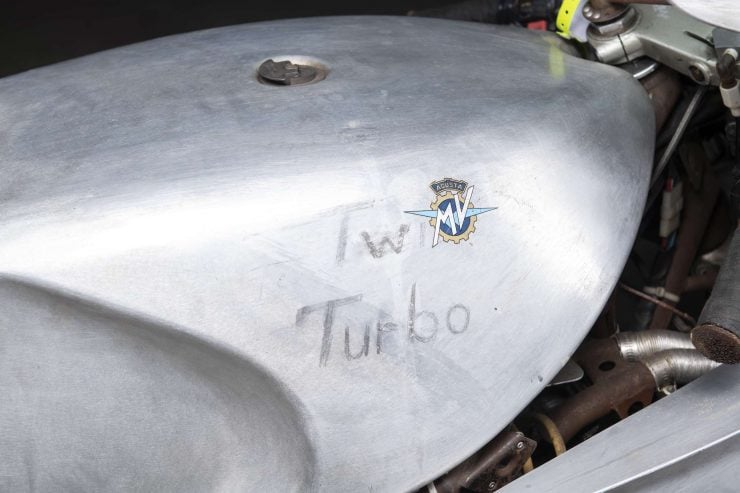 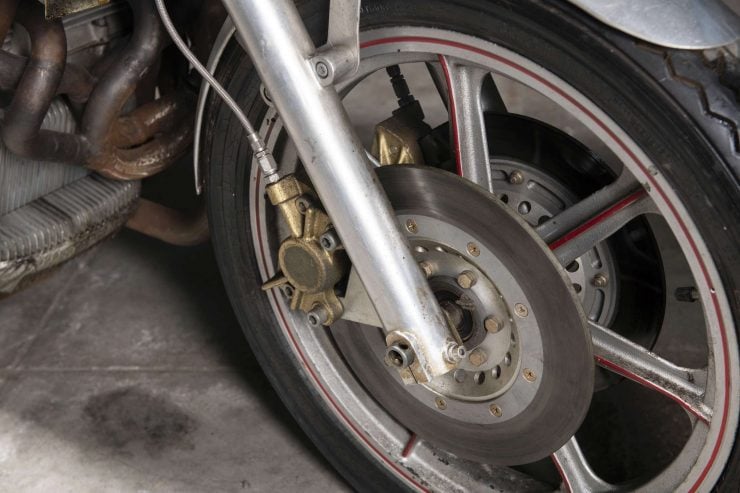 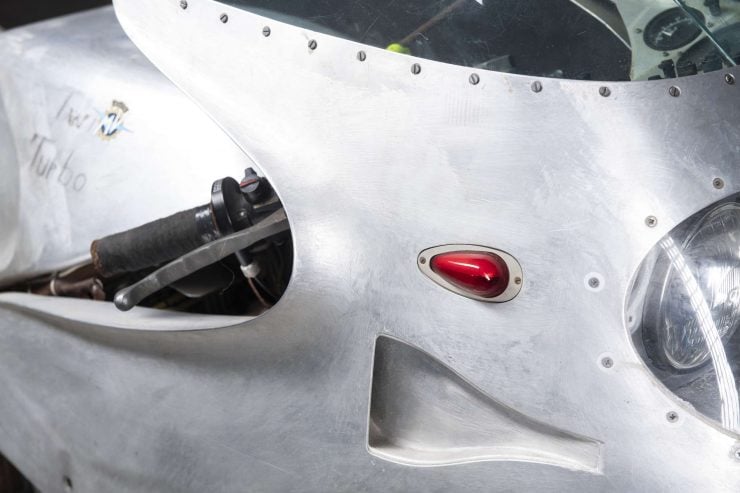 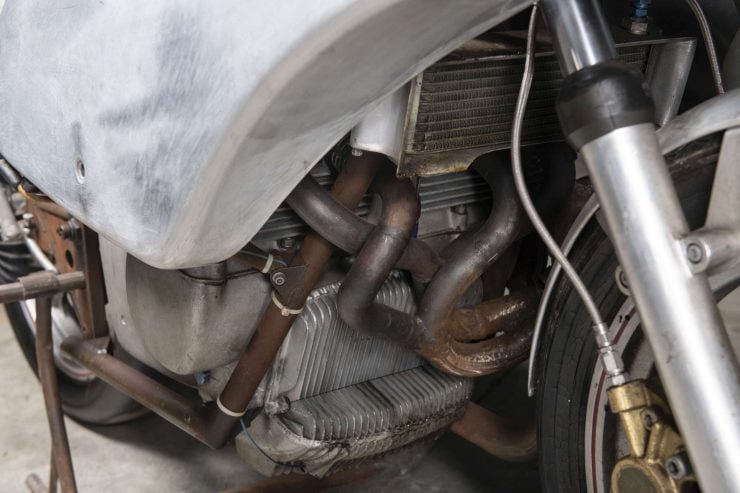 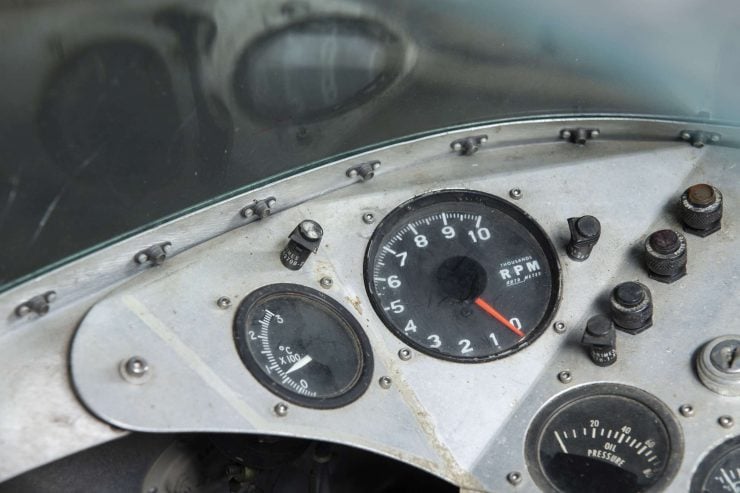 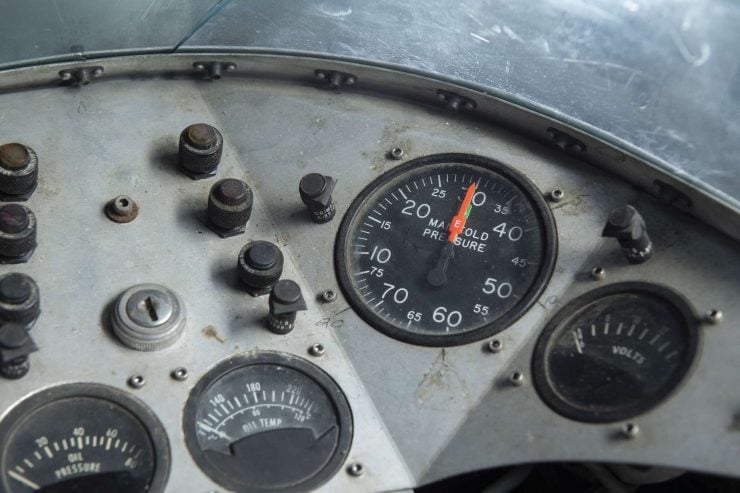 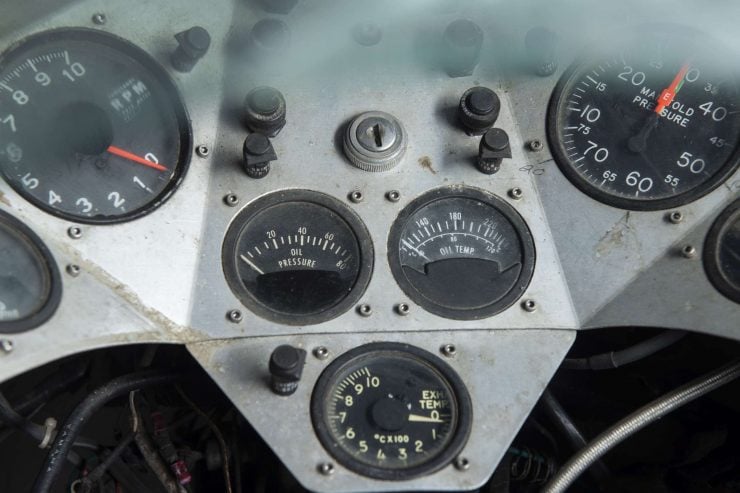 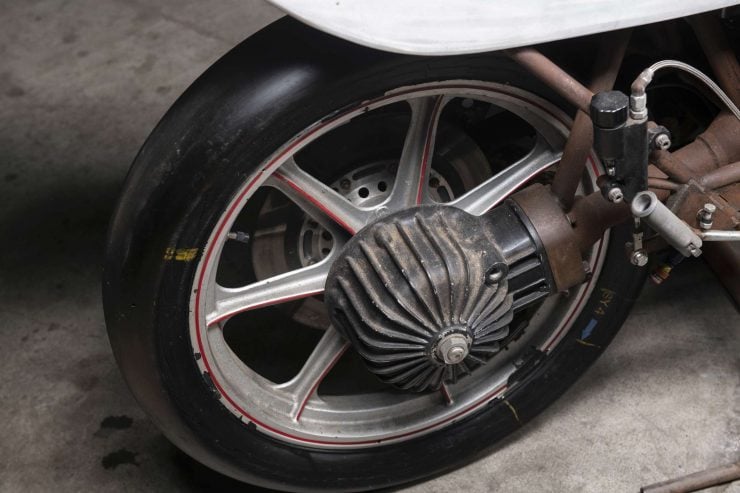 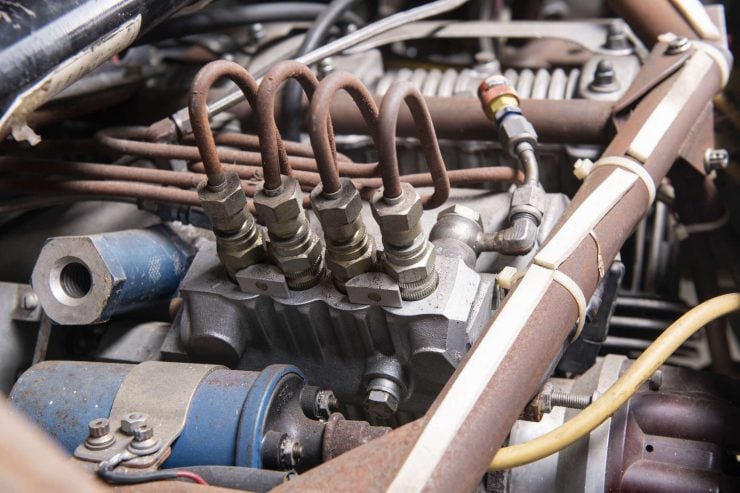 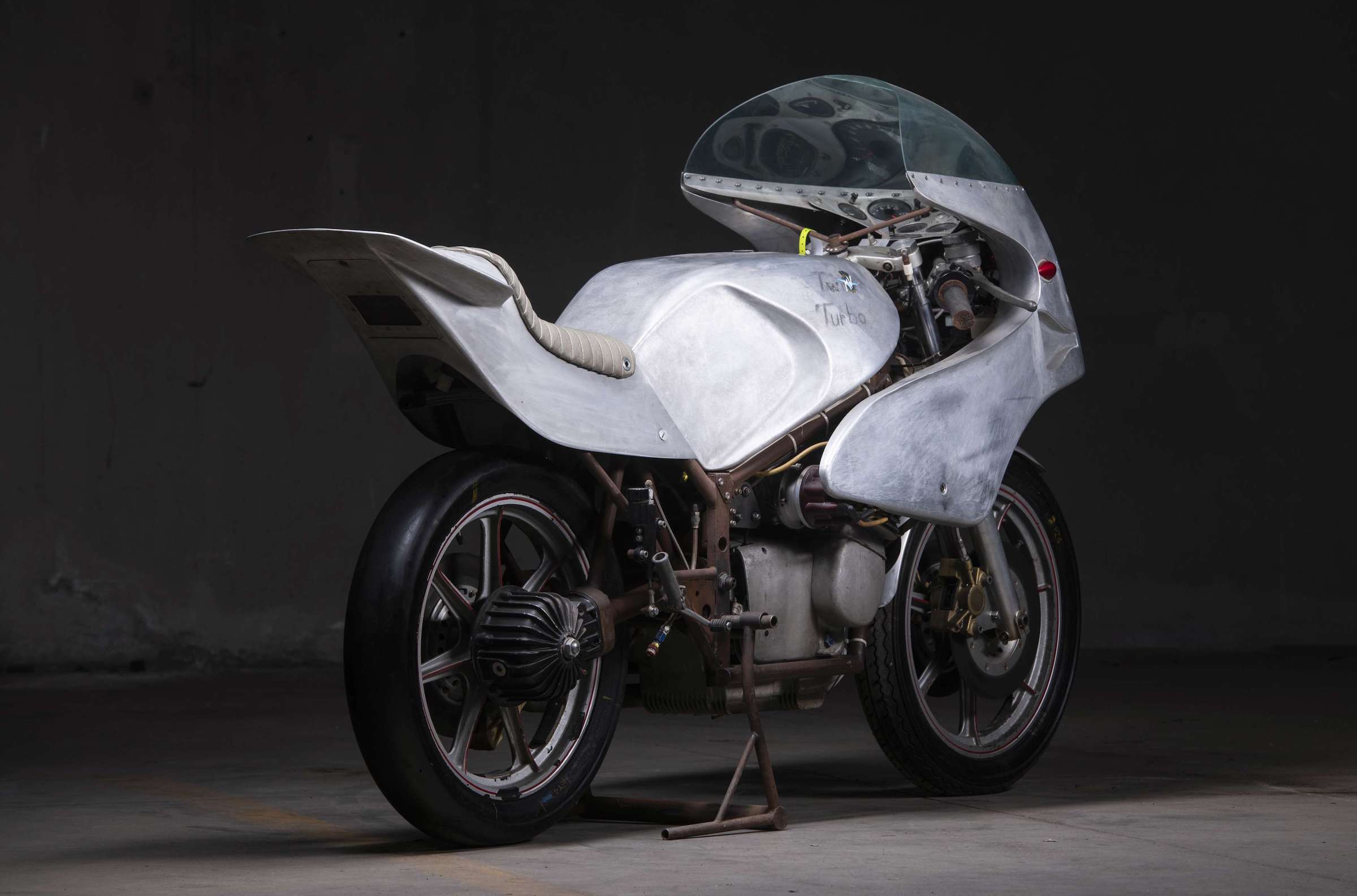