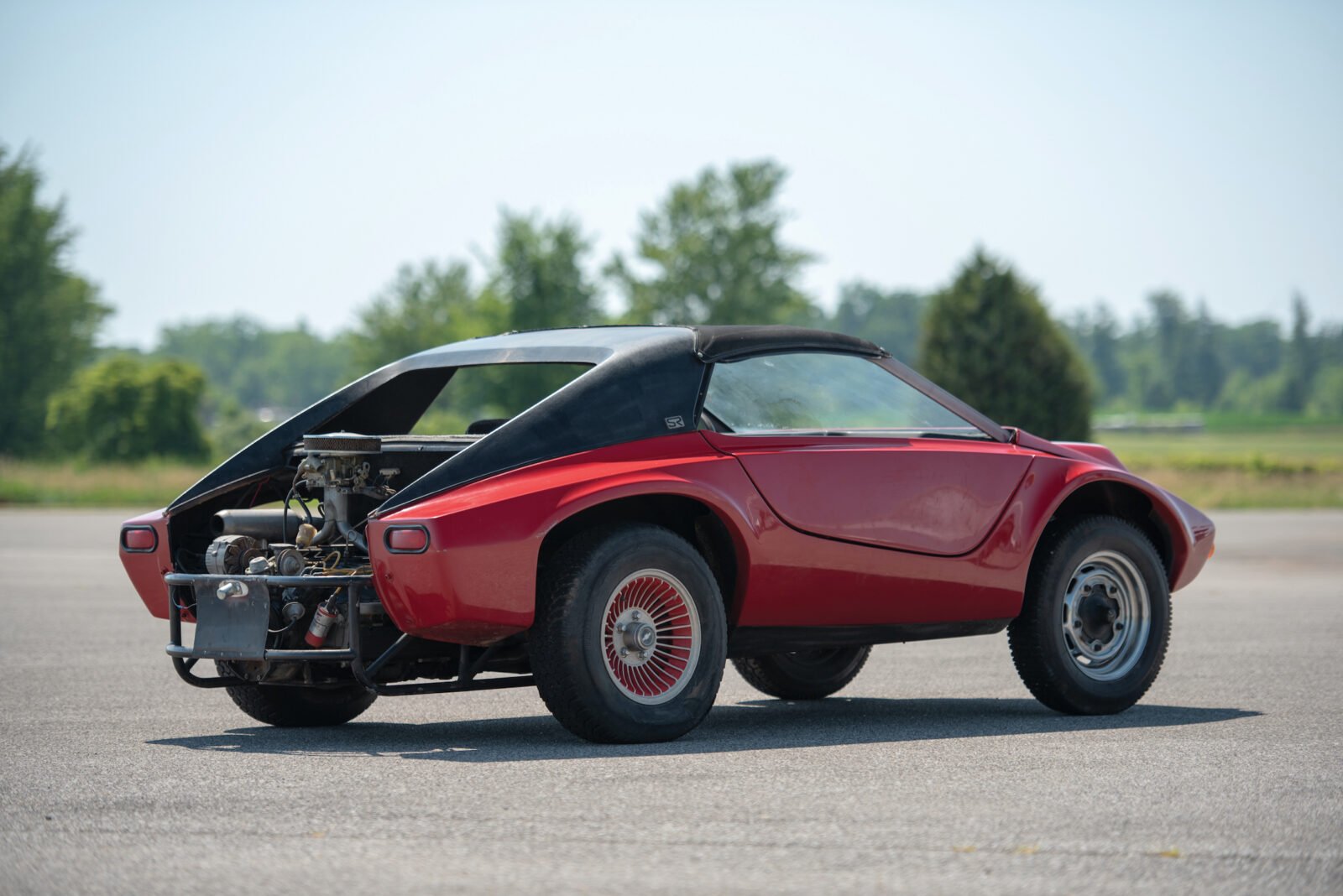 The Meyers Manx SR was developed as a road-going sibling to one of the most famous kit cars of all time – the Meyers Manx beach buggy. The concept was simple enough, build a lightweight fibreglass body that bolts onto a shortened VW Beetle chassis, and in so doing create a low-cost sports car that anyone can afford to buy and maintain.

B. F. Meyers & Co. introduced the Meyers Manx SR to the world in 1970 with a cover feature on the most popular car magazine in the world – Car & Driver. The journalists at the magazine were effusive in their praise for the humble little sports car, going so far to compare it favourably with the then-new Porsche 914 (as seen below).

“Taken strictly from the standpoint of fun-in-driving, it works better than anything at anywhere near the price, it is a genuine head-swiveler, and it looks like everything the Porsche 914 should be and isn’t.” – Gordon Jennings in the May 1970 issue of Car and Driver 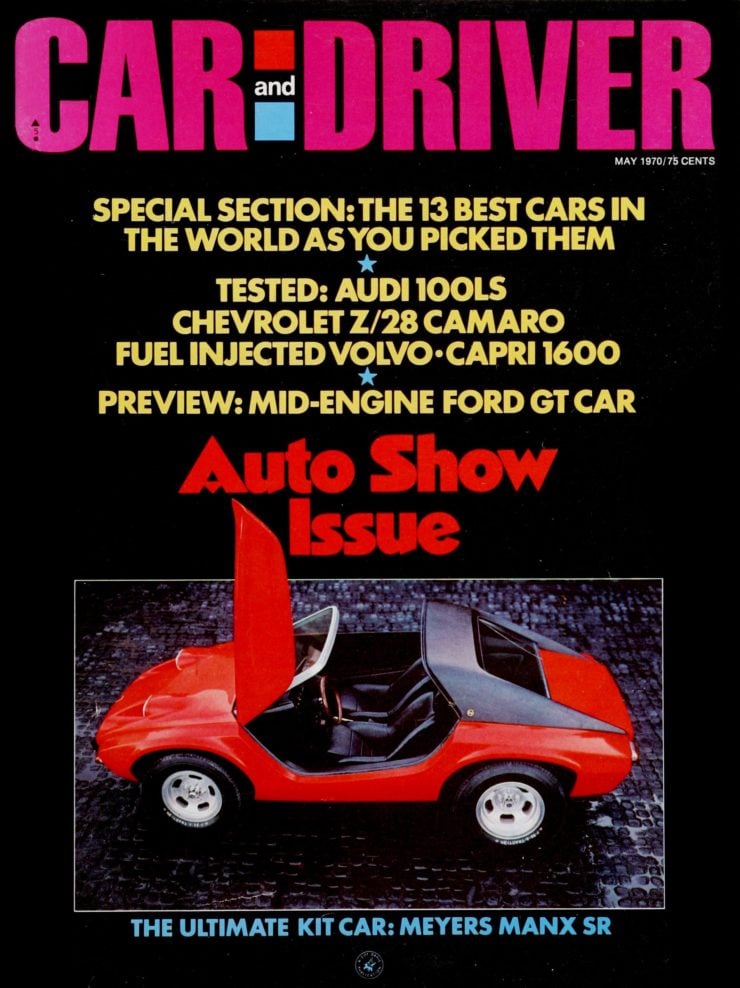 Above Image: The cover of the May 1970 issue of Car & Driver Magazine showcasing the new Meyers Manx SR.

On the face of it its not hard to see why the Manx SR was so popular with the press, it was the first all-new design from the drawing board of Bruce Meyers since he introduced the first Meyers Manx and forever transformed the world of beach buggies and kit cars. The letters “SR” stand for “street roadster”, an indication as to the intention for the new car to be a street-based sports car.

For the design of his new car Bruce was joined by Stewart Reed, a young graduate of the Art Center College of Design in California, who brought some cutting edge idea with him including the wedge-shaped styling and the forward hinged doors – pre-dating the same door type used on the Lamborghini Countach by fours years. 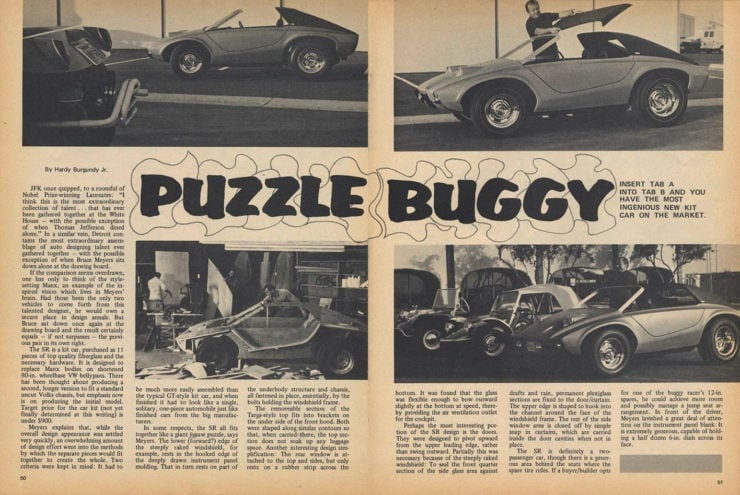 Above Image: A period magazine article about the Meyers Manx SR by Hardy Burgundy Jnr.

Due to the prolific and inexpensive nature of second-hand VW Beetles in the 1960s and 1970s it was the perfect platform for this kind of kit car. Owners could take pride in mentioning that the Porsche 911, one of the preeminent sports cars of the day, was also powered by a rear-mounted, air-cooled engine, and also had four-wheel independent suspension.

Interestingly one of the few factory-built Manx SRs was shipped to a man named Malcolm Bricklin, and it may have provided some inspiration for the Bricklin SV-1 production car that appeared just four years later.

The main body of the Manx SR was made up of 13 moulded fibreglass parts that were assembled onto a shortened Beetle floorpan. The car came with a removable Targa roof and sidescreens giving far better weather protection than the buggy, and thanks to its curb weight of ~1,500 lbs it offered respectable performance with a stock 40hp Beetle engine, and 100+mph performance with a hot rodded engine producing 80+hp.

Above Video: Jay Leno take a look at the original Meyers Manx with Bruce Meyers himself.

Meyers had already sold over 6,000 of his beach buggy kits however tragedy struck when an ill-informed judge refused to uphold his patent on the design, opening the floodgates for cheap copies to be made en masse – it’s now estimated that over 250,000 Manx copies have been built around the world.

Despite its praise in the magazines and excellent performance abilities, the Meyers Manx SR never achieved the sales successes of its forbear. Estimates put the final number built at between 200 and 206, and it’s unknown how many are still on the road today, though there are groups online dedicated to restoring them and keeping them alive.

Meyers Manx is now back in business and remarkably it’s possible to buy brand new kits as well as pre-shortened Beetle chassis to create your own Manx buggy, doubtless making it one of the most enduring American car designs of all time. 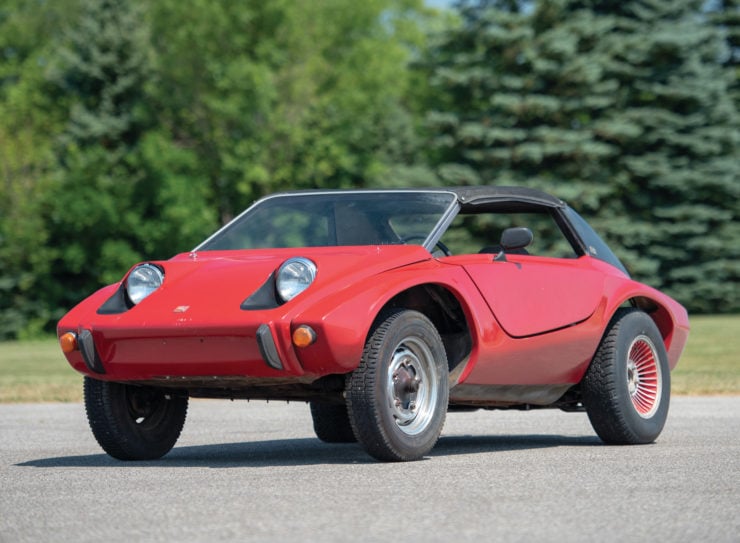 The 1970 Meyers Manx SR you see here appears to be in largely complete and original condition, but it does require either a recommissioning or a full restoration. It has a sporty interior with twin bucket seats and unusually it’s fitted with a rear-mounted Chevrolet Corvair engine topped with a Holley carburettor.

The Chevrolet Turbo-Air 6 engine is an all-alloy flat-6 that was fitted to the Corvair in a wide variety of configurations, power output varied from 80 hp up to over 180 hp in turbocharged versions. Once restored the Corvair engine fitted to this Manx SR would produce considerably more than the stock VW Beetle engine, resulting in very lively performance.

Some of the Meyers Manx beach buggies were also fitted with hopped up Corvair engines, including most notably the buggy used by Steve McQueen and Faye Dunaway in The Thomas Crown Affair.

If you’d like to read more about the car or register to bid you can click here to visit the listing on RM Sotheby’s. It’s due to roll across the auction block in early September with a price estimate of $5,000 to $10,000 USD. 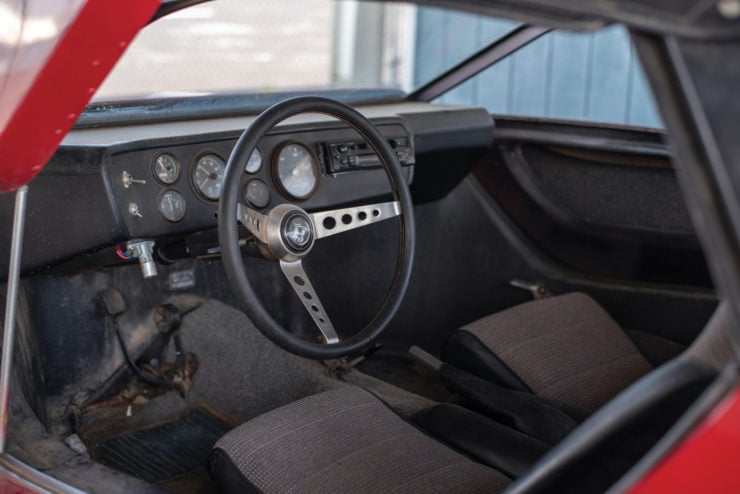 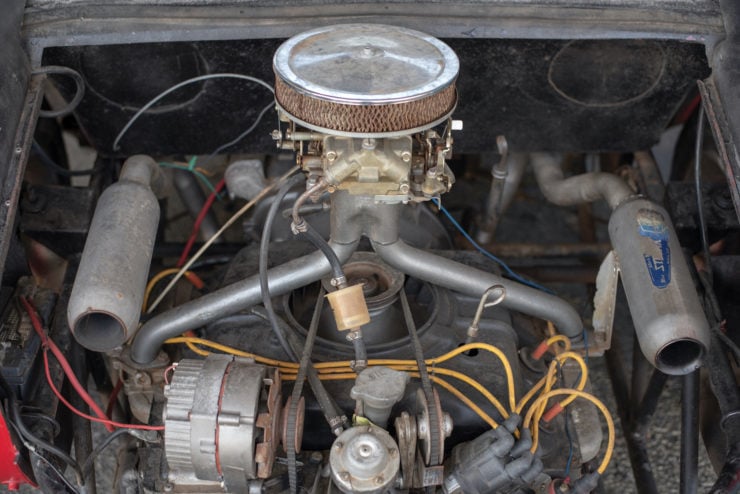 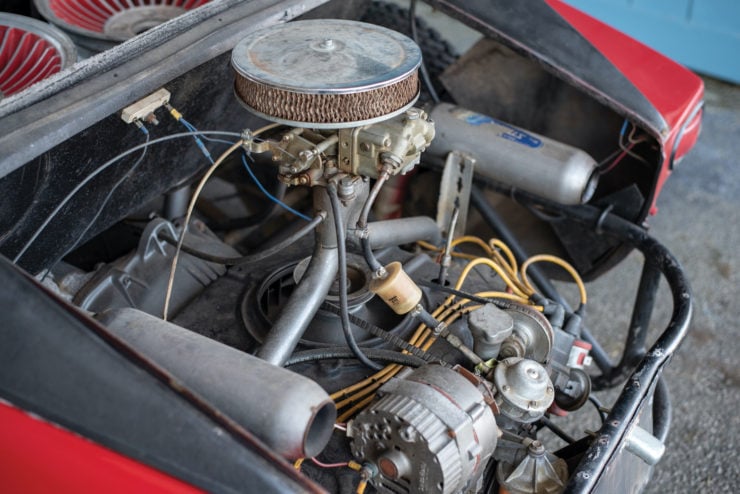 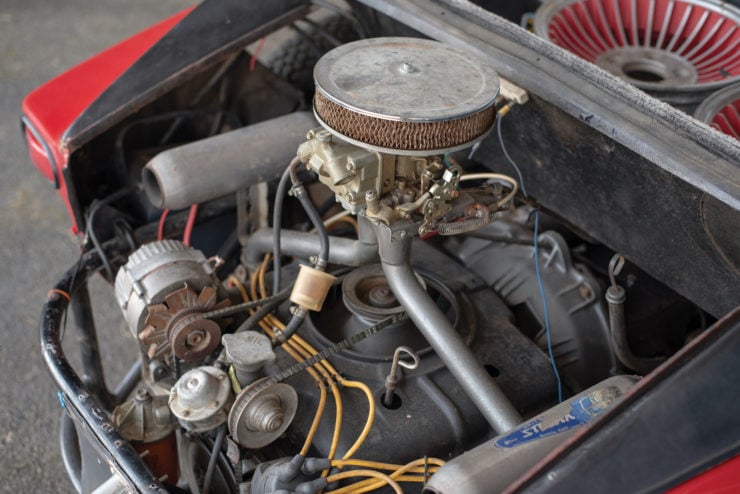 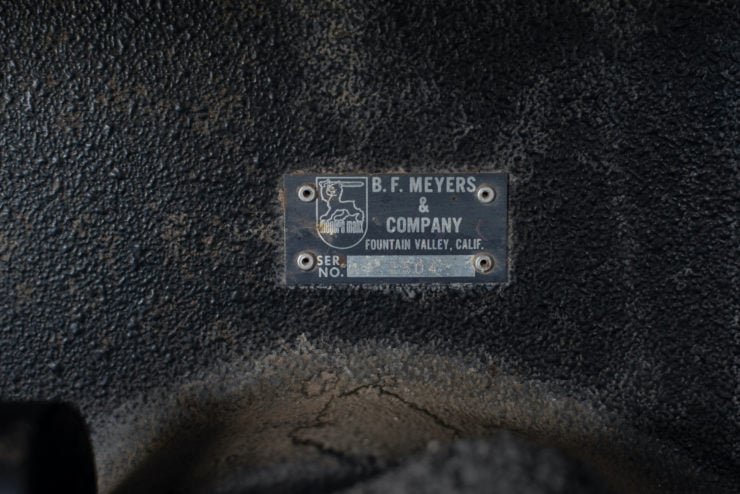 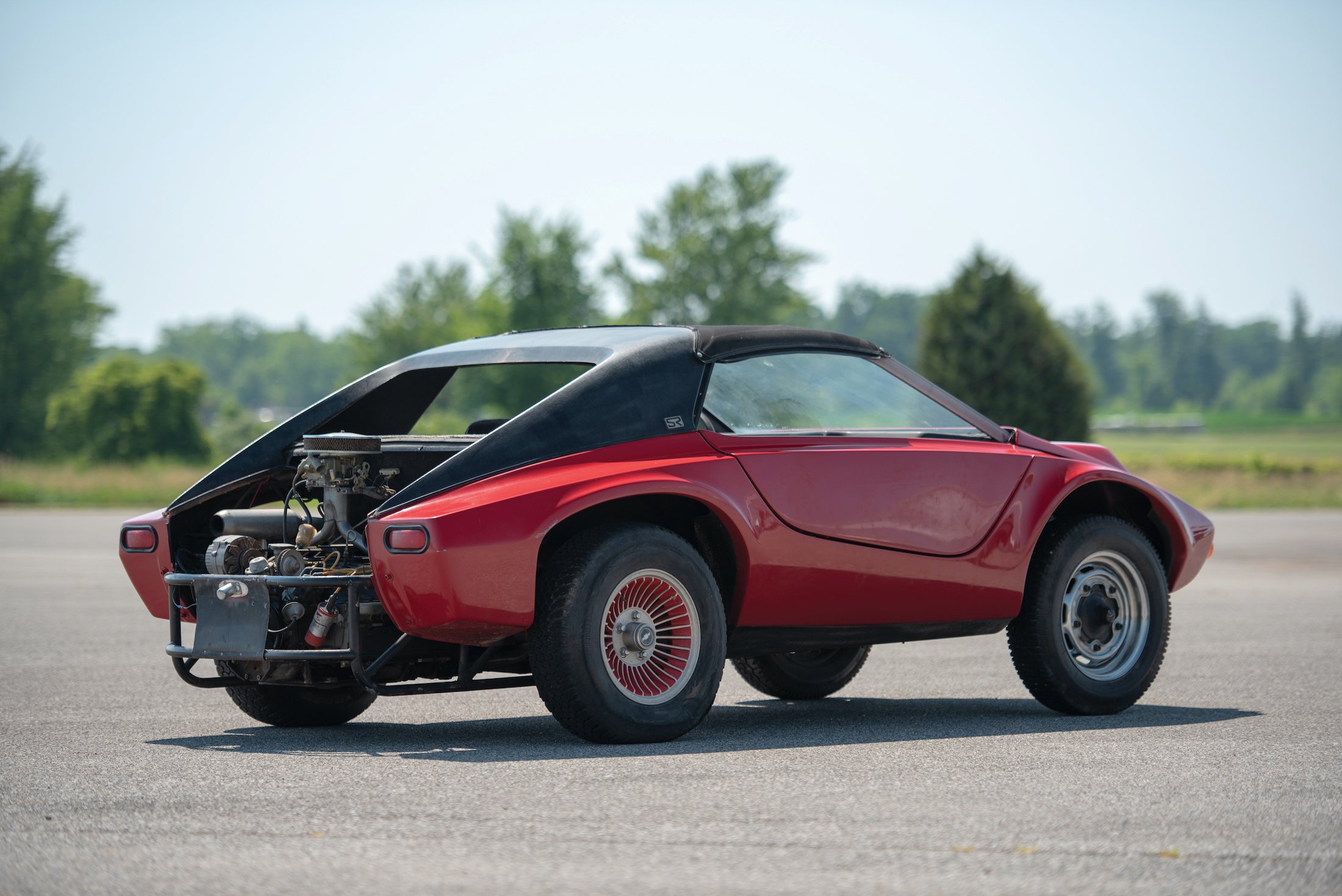