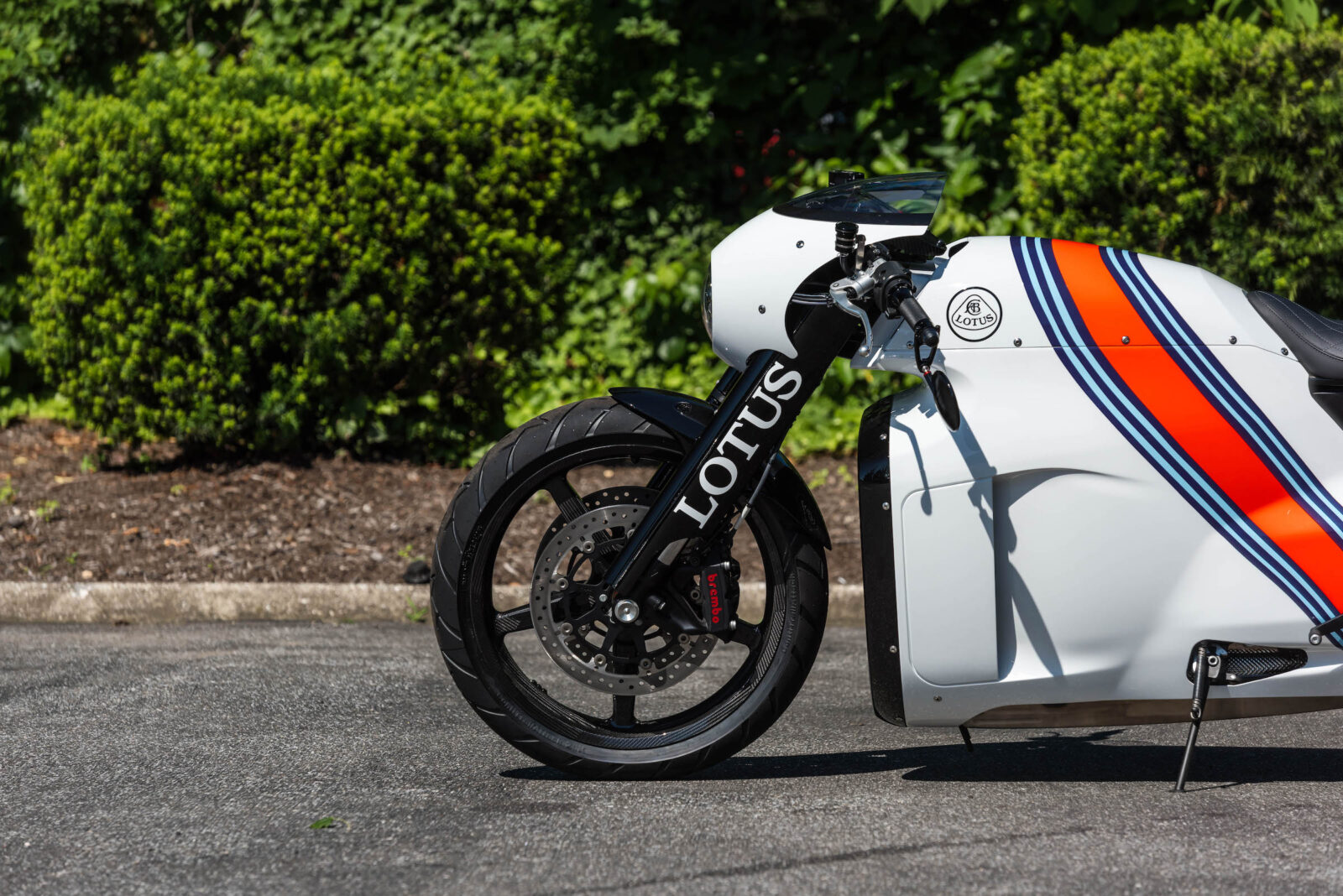 Only 100 examples of the Lotus C-01 were built, it was a motorcycle that appeared to come out of nowhere in 2014 when it was announced by German racing team Kodewa (now ByKolles Racing), German motorsport and aerospace company Holzer Group, and acclaimed industrial designer Daniel Simon.

The Lotus C-01 looks like no other motorcycle ever made, it’s powered by the same 1195cc liquid-cooled 75º V-twin engine used in the KTM RC8R. This engine has double overhead cams, four valves per cylinder, a 13.5:1 compression ratio, 90 ft lbs of torque, twin sparks, electronic fuel injection, and a 6-speed transmission.

The motorcycle was built under official license from Lotus, but the British sports car maker had little if anything to do with the actual design and construction of the bike.

Thanks to extensive use of titanium, a carbon fiber body shell, and an aerospace quality steel-trellis frame, the C-01 tips the scales at 181 kilograms dry, or 399 lbs. Everything about the bike is top shelf, including Öhlins twin shock absorbers at the rear Sachs forks up front, twin discs on the front end with 4-piston Brembo brakes, and the exceptionally lightweight 19 inch carbon fibre wheels front and back. 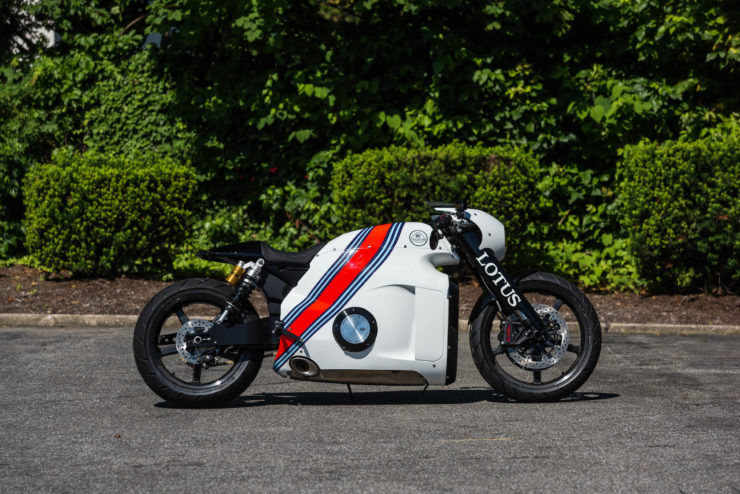 The designer, Daniel Simon, drew from the iconic Lotus 49 for inspiration. This was one of the most important Formula 1 cars in history, the first powered by the Ford Cosworth DFV engine, that was itself made because Colin Chapman talked Ford into building it. The car won the title in its debut year of 1967 and would continue winning races right up into 1970, as many of the other teams scrambled to copy it.

In the spirit of the Lotus 49, the Lotus C-01 has no electronic rider aids. There’s no ABS, no traction control, and no stability control. Much like its vintage F1 forebear, control of the motorcycle is entirely down to the human pilot.

Daniel Simon is a former Bugatti designer who has become famous for his futuristic creations including the Tron Lightcycles from the 2010 film, and the “Bubbleship” used by Tom Cruise in the recent Universal sci-fi hit “Oblivion”.

Whilst some commentators derided the original concept for its long wheelbase and 52º rake, the journalists who actually had a chance to ride it had overwhelmingly positive feelings about the Lotus and its handling. It has developed by two German companies famous for their work in Formula 1, DTM, Le Mans prototype racing, rally, and a slew of other racing series. 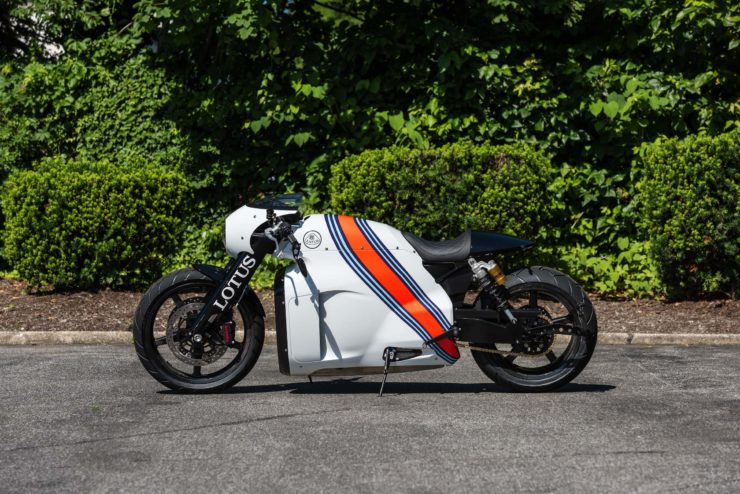 This disconnect between guesswork based on visual appearance and actual on-road performance was similar to the reception of the Ducati Diavel. Initial spy shots of the prototypes were widely derided, but the media reception once people actually got to start riding it was mostly positive and occasionally effusive.

The C-01 has been compared with the Diavel, as well as the new Royal Enfield Concept Kx which was possibly partially inspired by the Lotus.

All of the examples of the C-01 that were built are now in the hands of their owners, they only seem to rarely come up for sale which is a possible indication that they’re fun to ride. The original asking price was $137,000 USD and it’s difficult to nail down what they’d be worth at auction, though due to the rarity and the Lotus name they’ll never be cheap.

This Martini-liveried C-01 is due to roll across the auction block with Mecum in mid-August, there’s no estimate listed and if I’m reading the odometer correctly it’s got 0 miles on it. If you’d like to read more about it or register to bid you can click here to visit the listing. 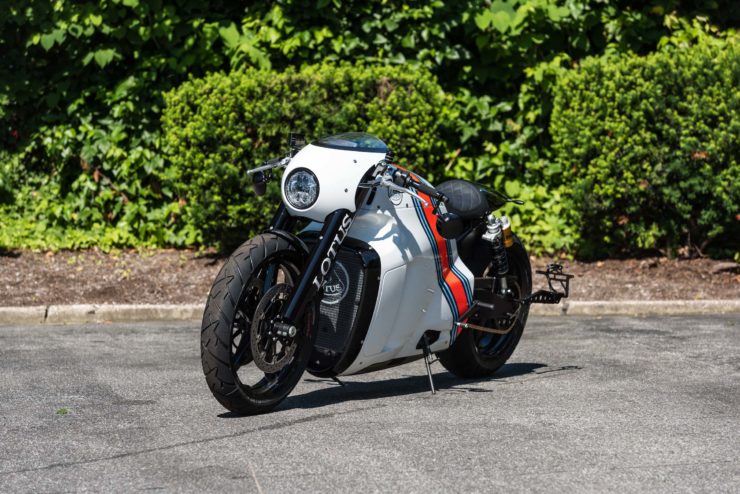 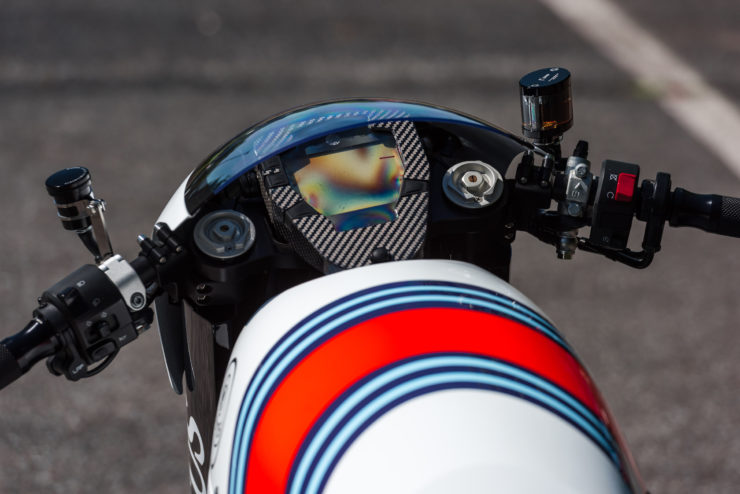 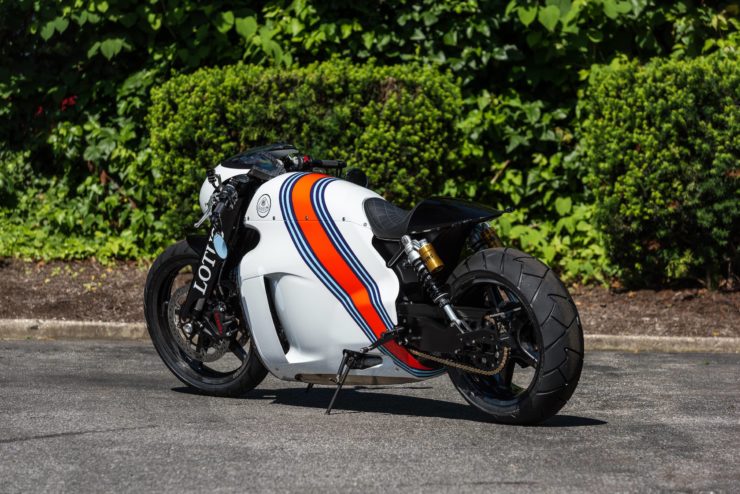 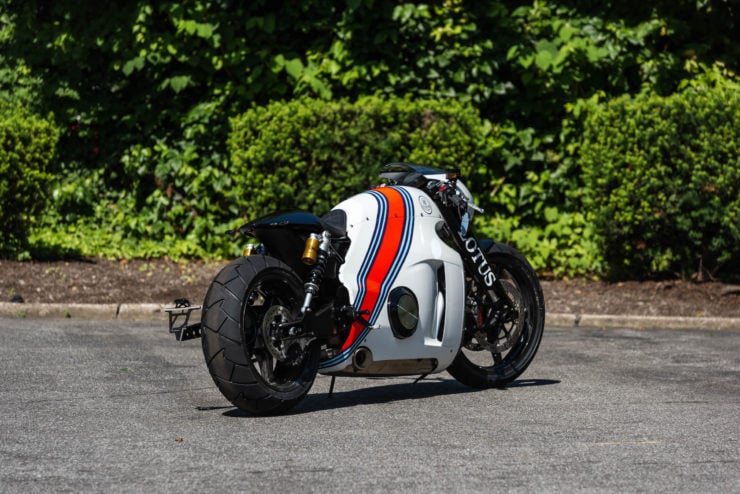 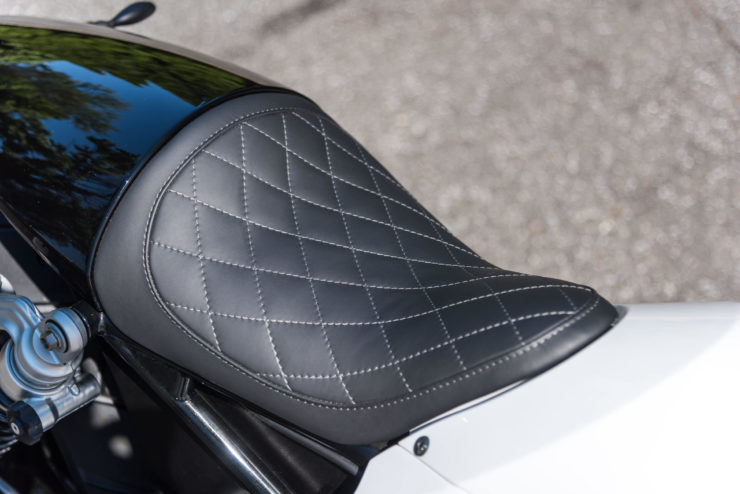 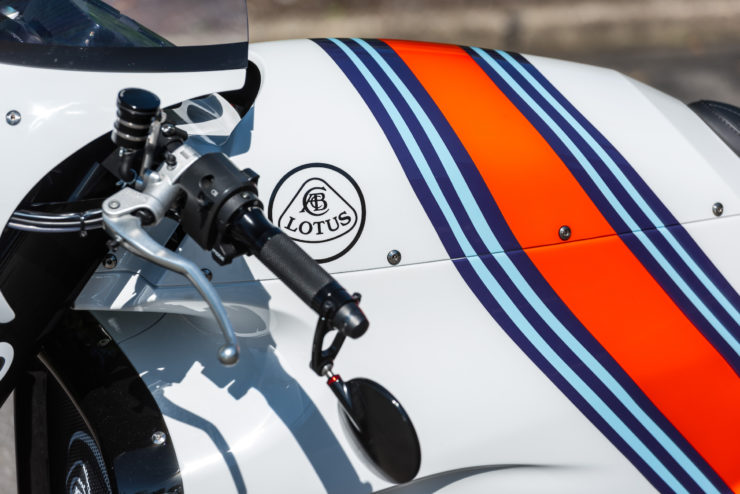 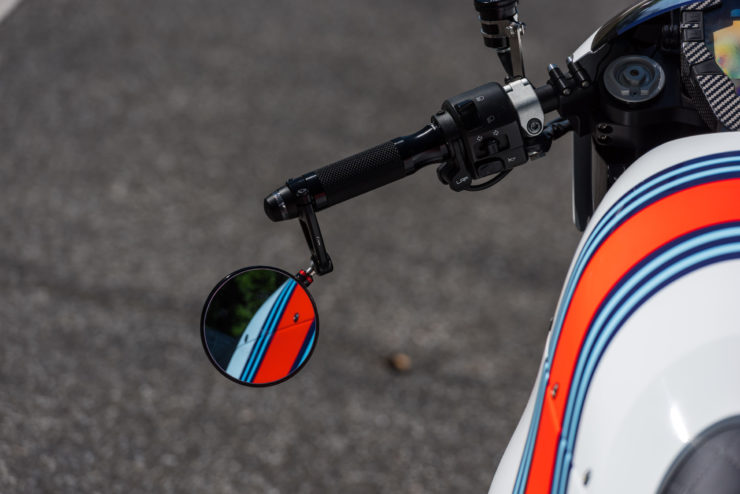 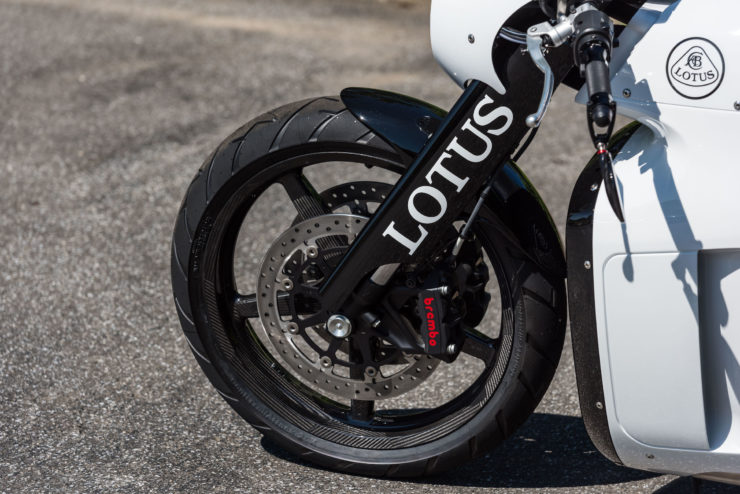 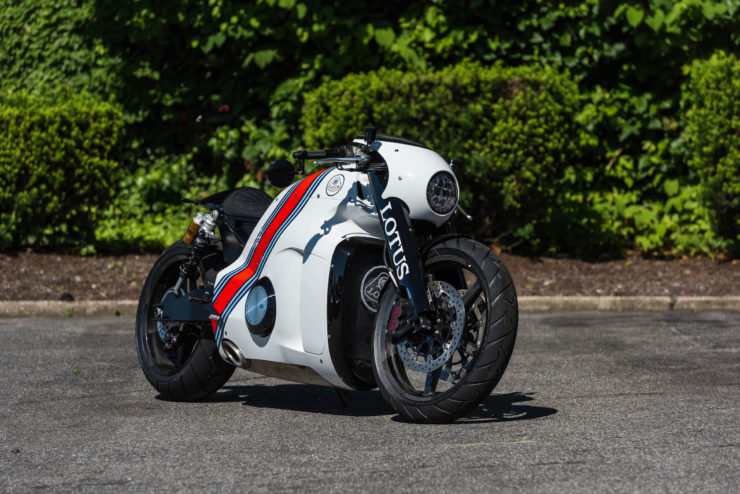 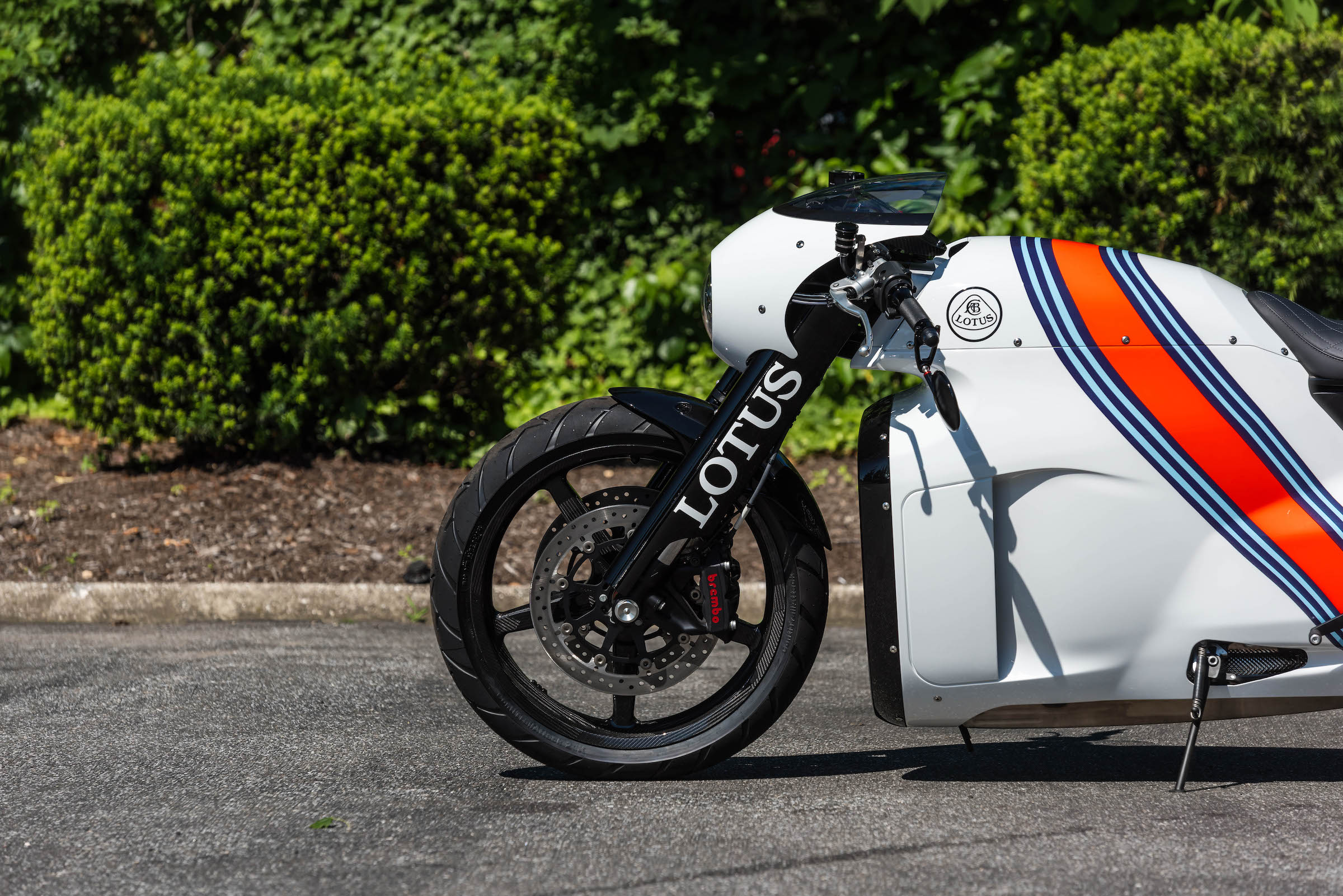