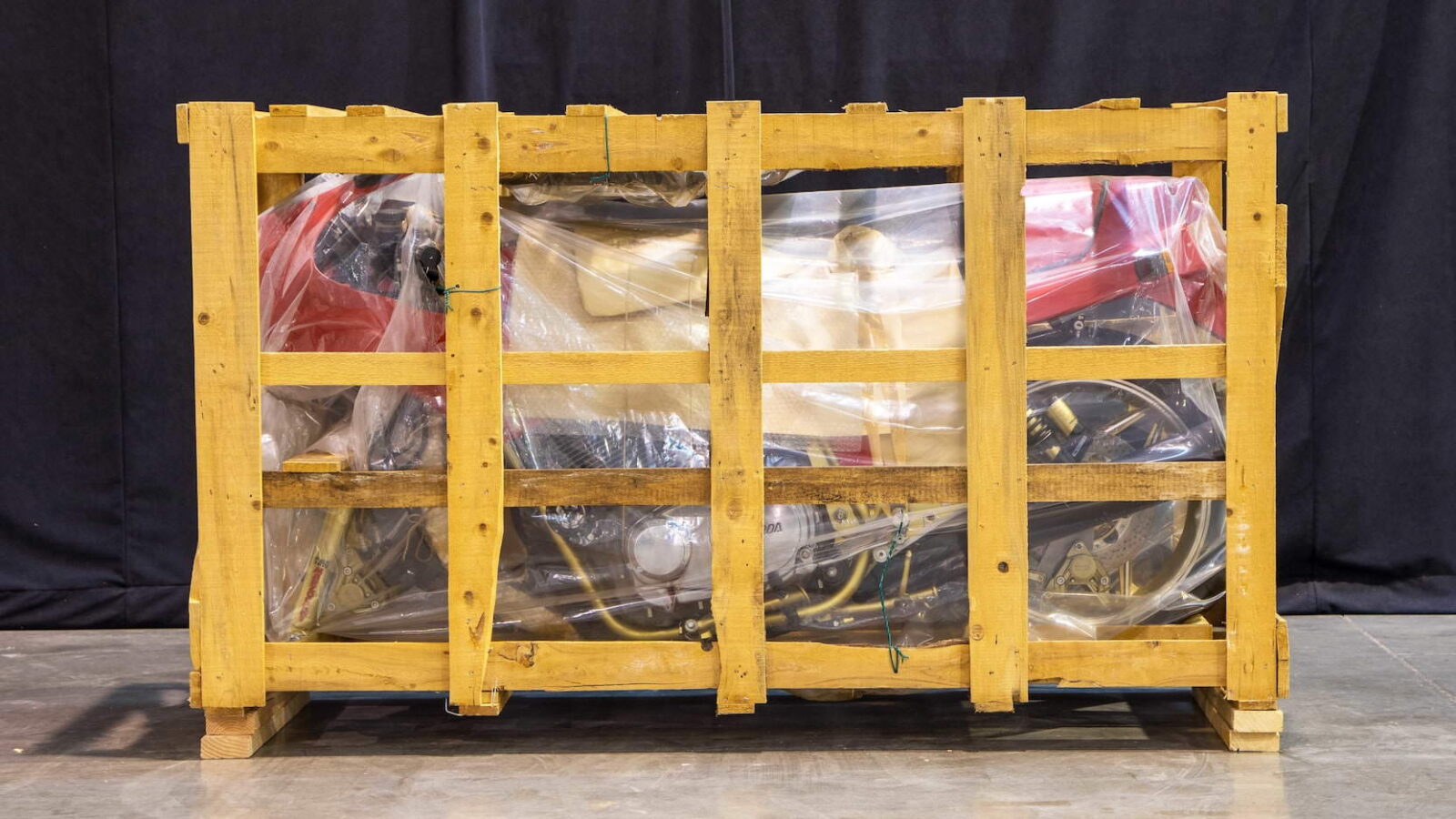 The Laverda SFC 1000 would be the final hurrah for the mighty Laverda triple, an advanced engine design that had been in production for 15 years by the mid-80s, valiantly keeping the Italian marque up to pace with the well-funded Japanese superbikes of the era.

Laverda first started life back in 1873 when Pietro Laverda began designing and building agricultural engines. It would be many years later in 1949 that Pietro’s grandson Francesco would start Moto Laverda S.A.S. The project to build Laverda motorcycles started out humbly in a fashion not dissimilar to local rivals Ducati – the first Laverda motorcycles were small capacity, single cylinder commuter bikes designed to be affordable.

The rumour is that Pietro Laverda actually started designing the first Laverda motorcycle engine with Luciano Zen after office hours. They used a home kitchen to cast parts and the first motor was a rather simple 75cc affair, but it showed promise, and it would be the engine that launched the motorcycle company.

The first couple of decades for Moto Laverda S.A.S were dominated by small capacity motorcycles, they proved successful in motorsports but most were street bikes, with a few off-road motorcycles built in co-operation with other manufacturers like Zündapp and Husqvarna. 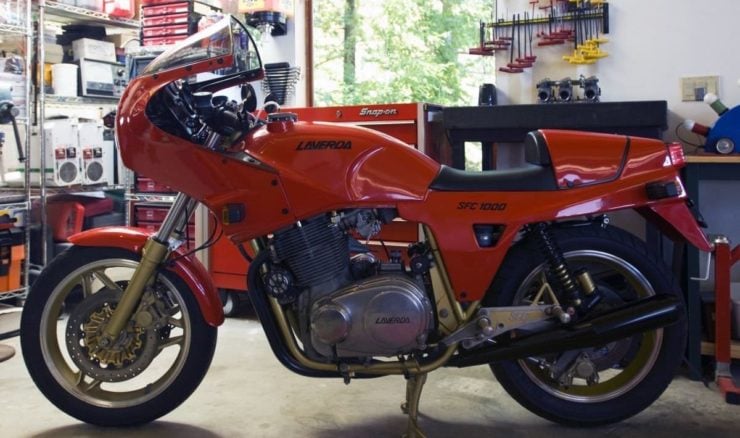 Above Image: A 1988 Laverda SFC 1000, used here as an example of what the model looks like out of its crate. Image courtesy of eBay Motors.

In the 1960s the company turned its attention to larger capacity motorcycles to compete with the British, American, and German marques. The company released a 650cc parallel twin followed by a 750cc parallel twin, both were advanced designs for the era and they drew many accolades from reviewers, but with the release of the Honda CB750 in 1969 Laverda knew they needed something new.

The result was the first Laverda triple, a 1000cc (actually 981cc) inline-three cylinder motorcycle with a single overhead cam, two valves per cylinder, and unit construction. The engine was designed by essentially grafting an extra cylinder onto the side of the original parallel twin, a tactic Triumph Motorcycles would also use, but despite its humble origins it worked remarkably well.

Throughout the 1970s Laverda would keep working on engineering advanced bikes, including an incredible V6 endurance racing bike, but by the 1980s the onslaught of cheap Japanese motorcycles was taking its toll, and the Laverda SFC 1000 would be the last major production model until the company was later relaunched.

The Laverda SFC 1000 was a modified version of the Laverda 1000 RGS (Real Gran Sport), a more touring oriented motorcycle that was modified into a sport touring bike for the release of the SFC. The 1000cc triple cylinder, double overhead cam SFC 1000 was a fantastic bike by all accounts, but it was being outpaced by less expensive Japanese machinery and it cost approximately double the MSRP of a comparable Japanese litre bike. 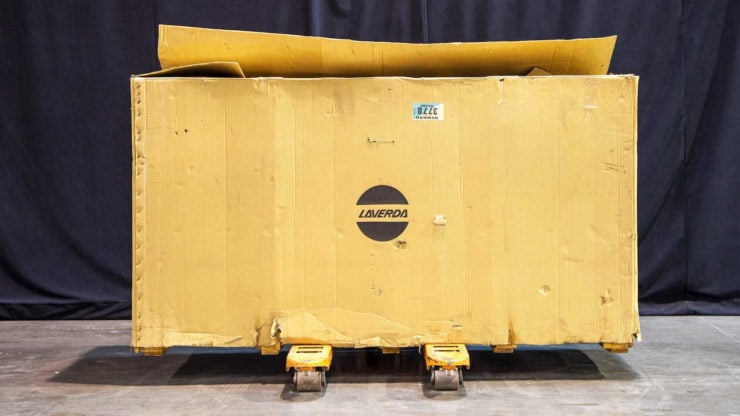 Laverda would shut down in 1985, there have been a number of attempts to revive the marque but so far they’ve all failed. All hope is not lost however as the intellectual property rights to Laverda currently belong to Piaggio, and they’ve made it clear they’d be willing to sell it to the right bidder.

The Laverda SFC 1000 you see is surely one of the lowest mileage examples in the world, it’s never been removed from its factory crate, and is still wrapped in plastic. Not many examples of the SFC 1000 were made, this is the first one we’ve ever seen still in its crate, it’s been preserved for 34 years at the time of writing.

The bike is currently part of the Musee L’Epopee de la Moto Collection but it’s due to be offered for sale via Mecum in January. If you’d like to read more about it or register to bid you can click here to visit the listing.

“Although representing an earlier age, the SFC 1000 ensured the Laverda legend didn’t die with a whimper. With classically beautiful styling, the SFC 1000 also benefitted from nearly 15 years of development. What was already a robust design was perfected into an extremely reliable machine, with excellent handling and performance. So, with the wonderful SFC 1000 the classic Laverda triple finally finished.” – Ian Falloon / The Laverda Twins & Triples Bible – Veloce 2007 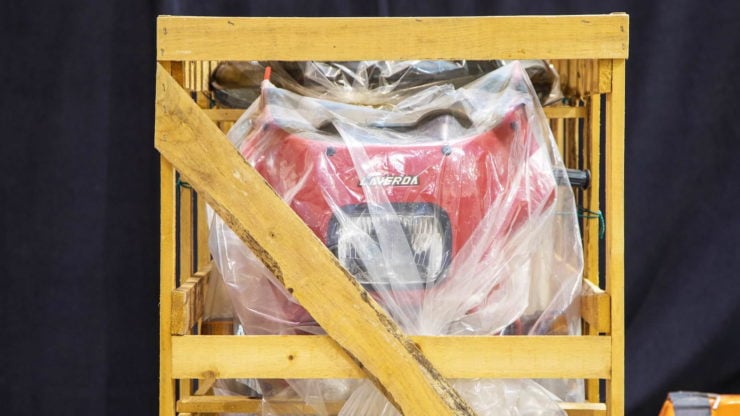 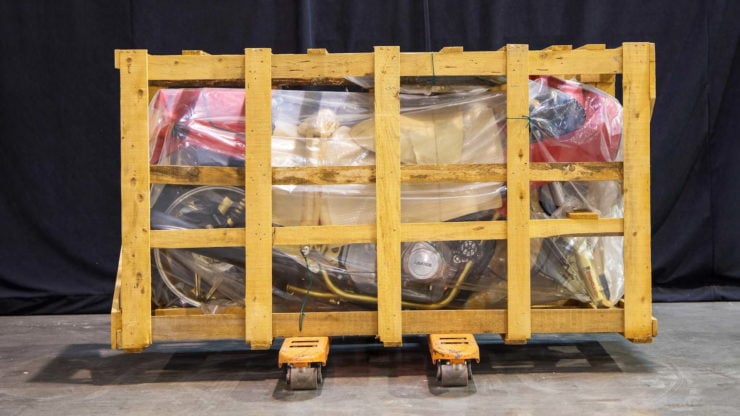 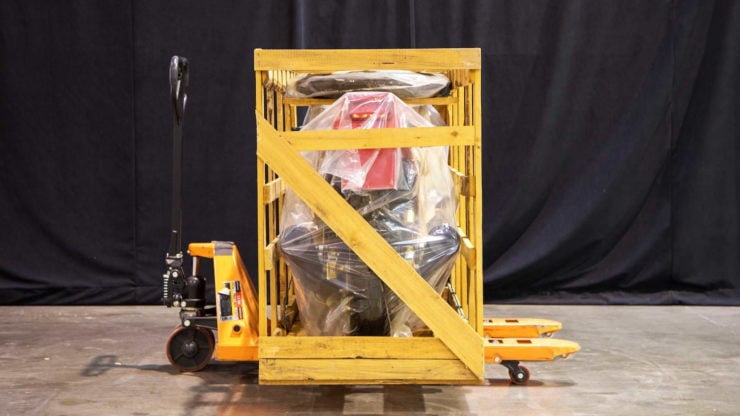 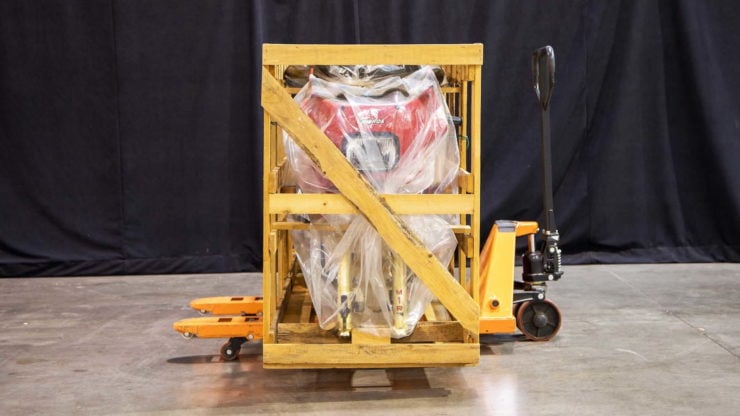 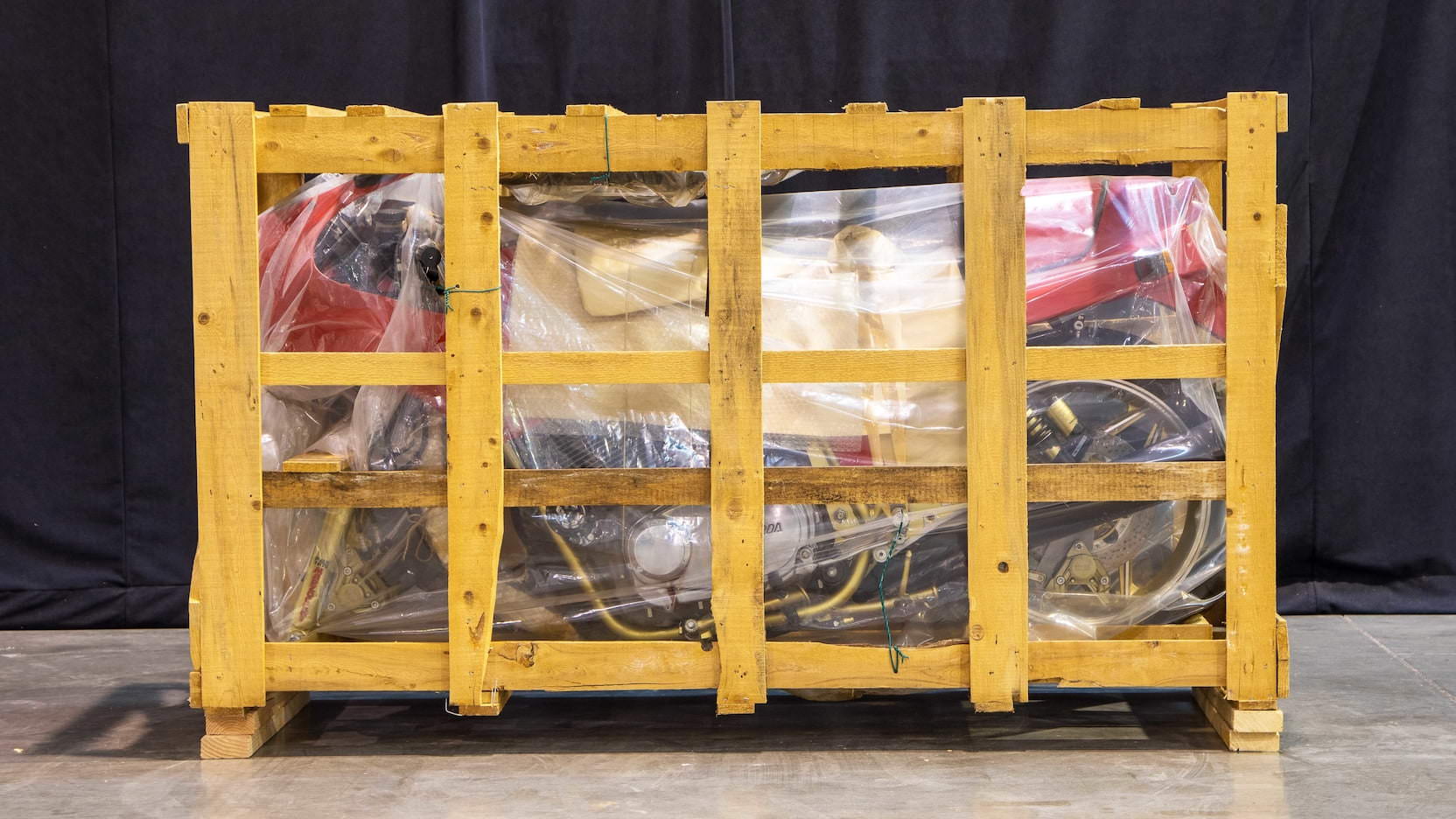