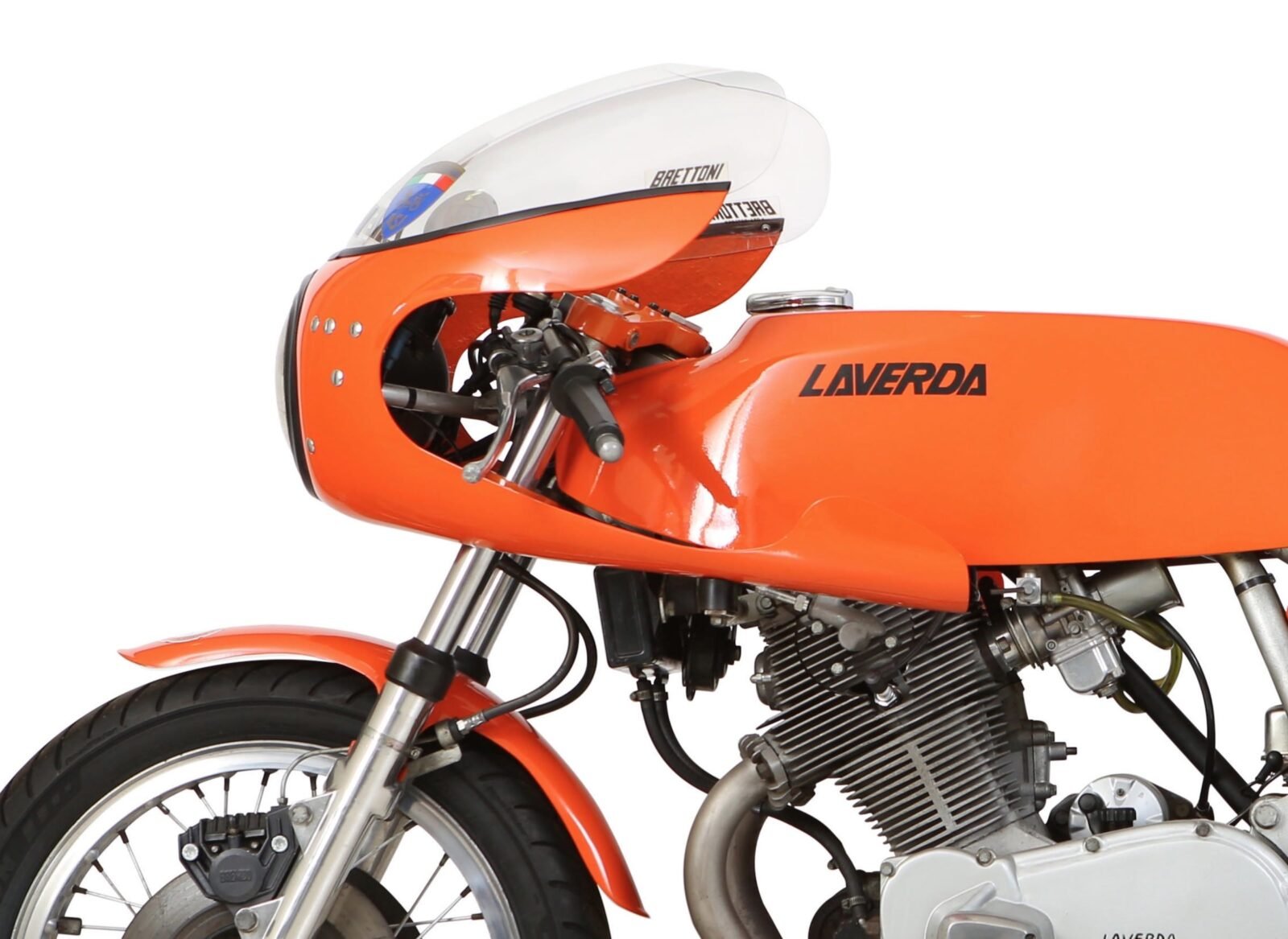 The Laverda 750 SFC Elettronica is the most desirable of the Italian company’s first big twins, and it’s not just sought-after for its looks – the 750 SFC took a slew of major endurance racing wins in the early 1970s against the best in the world.

The Laverda 750 SFC started out as an argument between a son and his father. The son (Massimo Laverda) being convinced that the company needed to diversify into larger capacity motorcycles to appeal to the large US market, with his father (Francesco Laverda) being more conservatively minded and wanting to stick with what had been Laverda’s bread and butter up until that point in time – small-capacity commuter motorcycles.

In the end the son won out, fortunately for us all, as Laverda would go on to build some of the best engineered large-capacity parallel twins of the era.

Up until this point the flow of technology had mostly been from the West to the East, but in this instance it flowed from Japan to Italy.

Though not a direct copy there is certainly a lot of external and internal similarity between the Laverda big twin and the CB77 engine, though in the 1960s this was largely seen as a good thing, as the Japanese company had a good reputation for reliability. 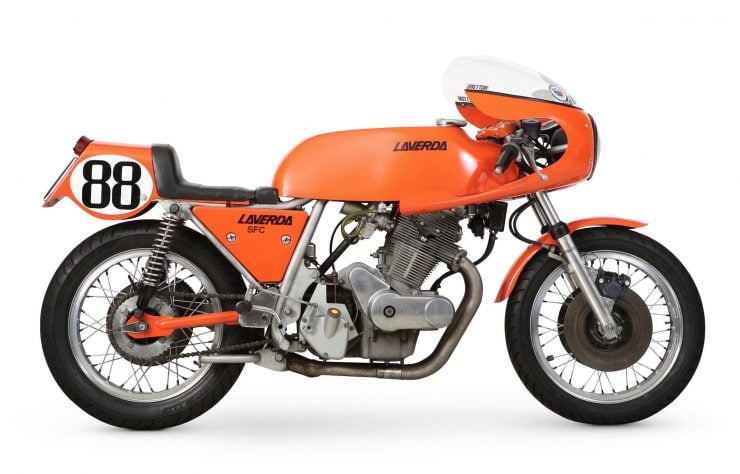 The Laverda twin started life as a 650cc unit but not many were made at this size, with the engine quickly being upgraded to 750cc to better compete with the popular parallel twins coming out of the UK. Internally the engine has a single overhead cam (chain-driven) with two valves per cylinder.

The engine was designed to be strong enough to be used as a stressed member with an open cradle steel frame, suspension is traditional double shock absorbers in the rear and hydraulic forks up front.

The Laverda 750 SF (an initialism of “Super Freni” or “Super Brakes” due to the updated brakes) won the 500 kilometers of Monza in 1970, they took a first, second, and third podium sweep at the 24 Hours of Oss (in Holland), and they took third and sixth at the 1970 Bol d’Or. 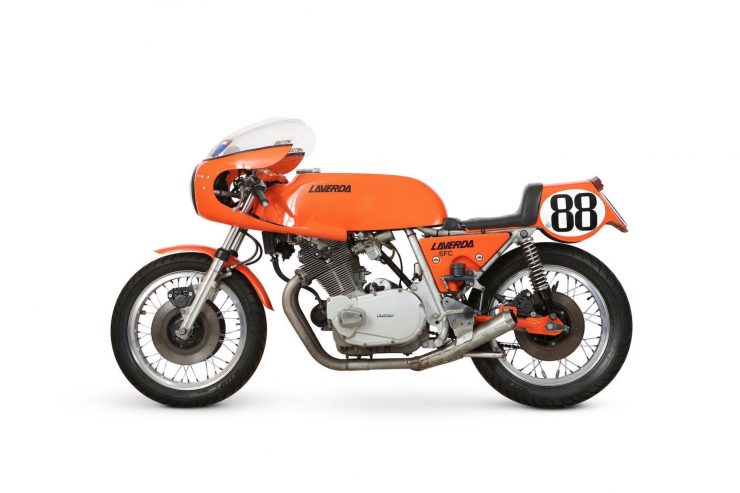 A year later in 1971 the Laverda 750 SFC was launched, its name standing for Super Freni Competizione, or super brakes competition.

As you may have surmised, this was the competition version specifically designed and built for racing.

Each example of the 750 SFC was painstaking hand-built for top flight endurance racing against the best in Italy, Germany, Britain, and Japan. The engines were carefully built away from the main production line with a larger valves, a racing cam, a reworked cylinder head, polished rockers, the crankshaft and rods were polished and balanced, and 36mm Amal concentric carburetors were fitted.

A close-ratio five-speed competition gearbox was installed, and the original frame was strengthened. Before they left the factory each bike was dyno-tested to ensure it was producing 70 bhp, and running perfectly as a turn-key race bike.

On the race tracks of Europe, the 750 SFC proved immediately successful, with a one-two finish at the 1971 Six Hours of Zeltweg, then first, third, and fourth at the 24 Hours of Montjuic in Barcelona, first and third at the 24 Hours of Oss, and a win in Vallelunga.

As the year progressed the new Laverdas would take a second place finish in the Bol d’Or, the top two steps of the podium at Imola, and the same again at the 500 kilometers of Modena. 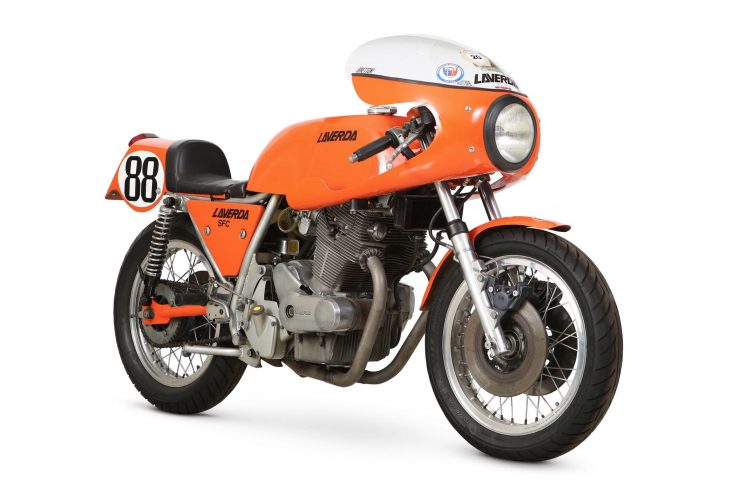 Over the course of its short production run the Laverda 750 SFC  would see a range of performance and reliability upgrades capped off with the top-of-the-line 1975 Laverda SFC Elettronica with its Bosch electronic ignition and a slew of performance upgrades pushing power to 75 bhp.

Due to the exceedingly low production numbers the 750 SFC Elettronica is a unicorn for many vintage motorcycle collectors, and finding unmodified originals for sale is a rare event indeed.

The beautifully presented original 750 SFC shown here was imported into the UK by Made in Italy Motorcycles in 2016 before being sold into the hands of the current owner.

It’s a matching-numbers example with an ASI identity certificate and what appears to be the original fairing, fuel tank, and seat. Its racing number is 88 which is hugely lucky if you happen to be from the Far East, and as a 1975 model it benefits from the upgraded brakes, upgraded 75 bhp engine, and long list of competition successes against the fellow Italians at Ducati, as well as the best of Britain and Japan.

The bike is now being offered for sale with SORN paperwork, a V5C document, and an instruction manual (in Italian). Estimated value is £24,000 to £28,000 which actually isn’t bad at all for a motorcycle that’s widely regarded as solid gold Italian royalty. 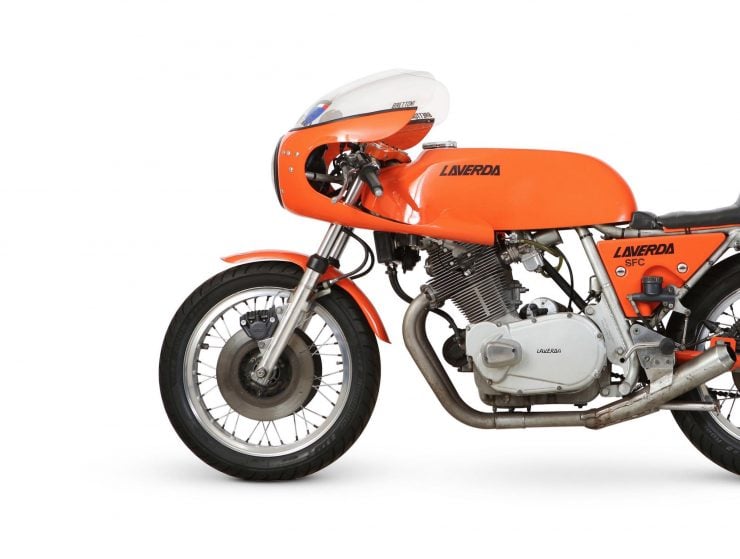 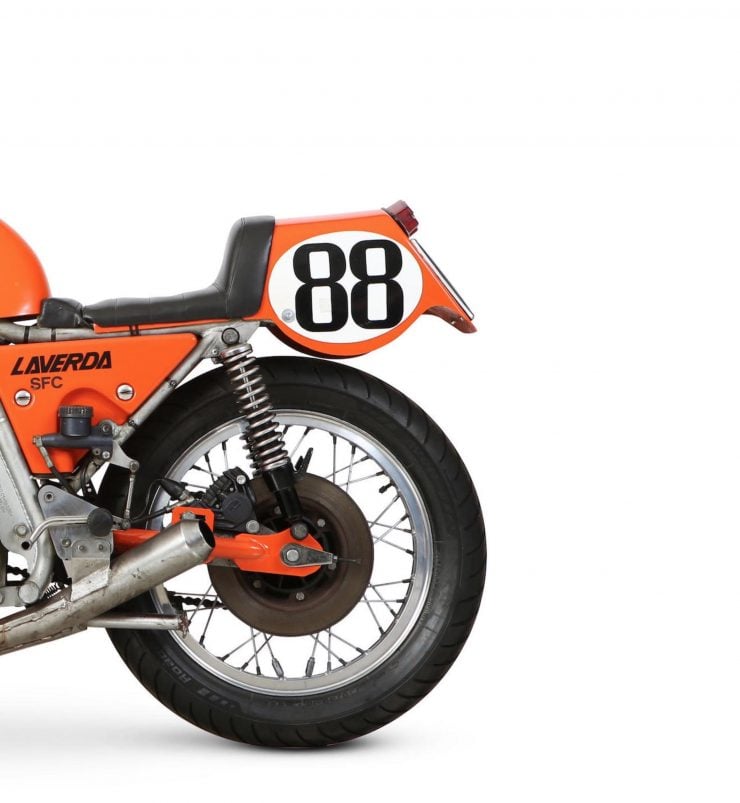 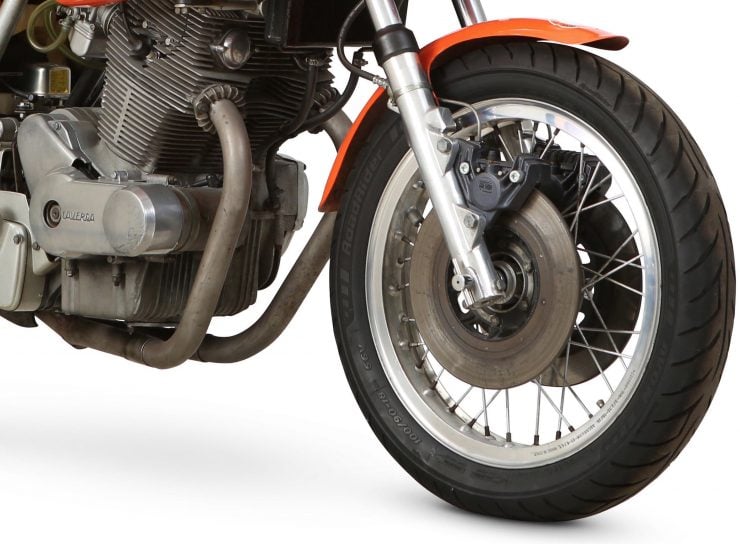 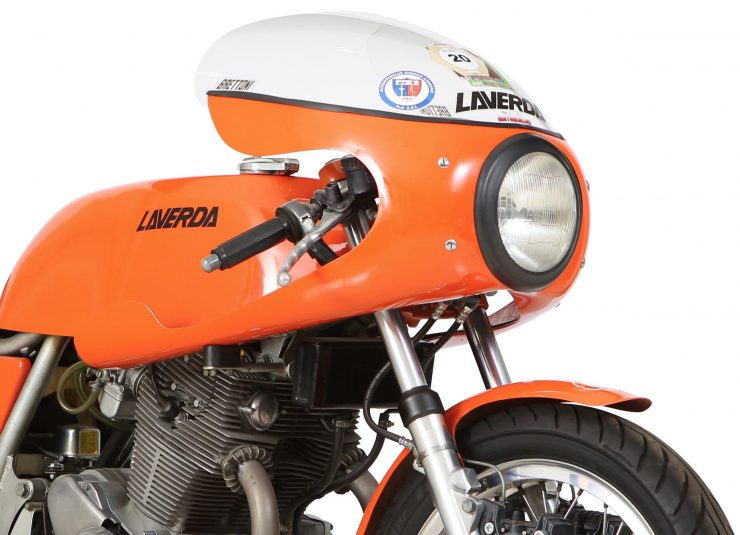 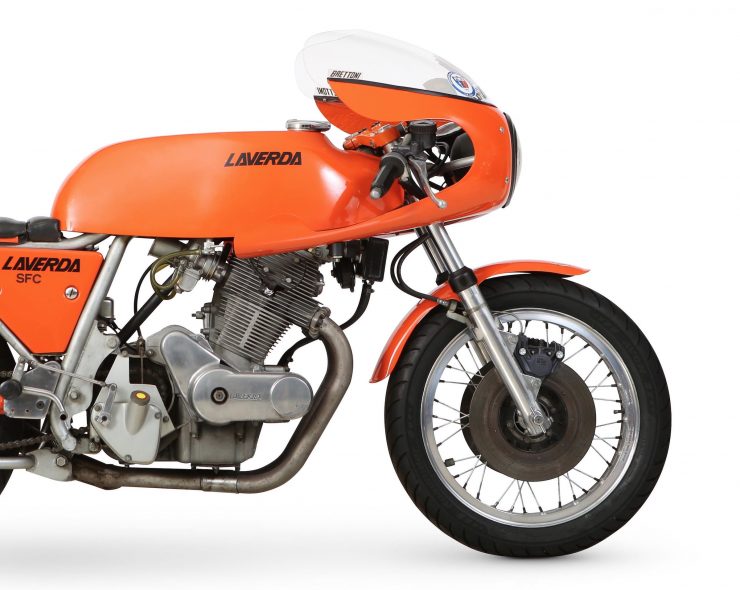 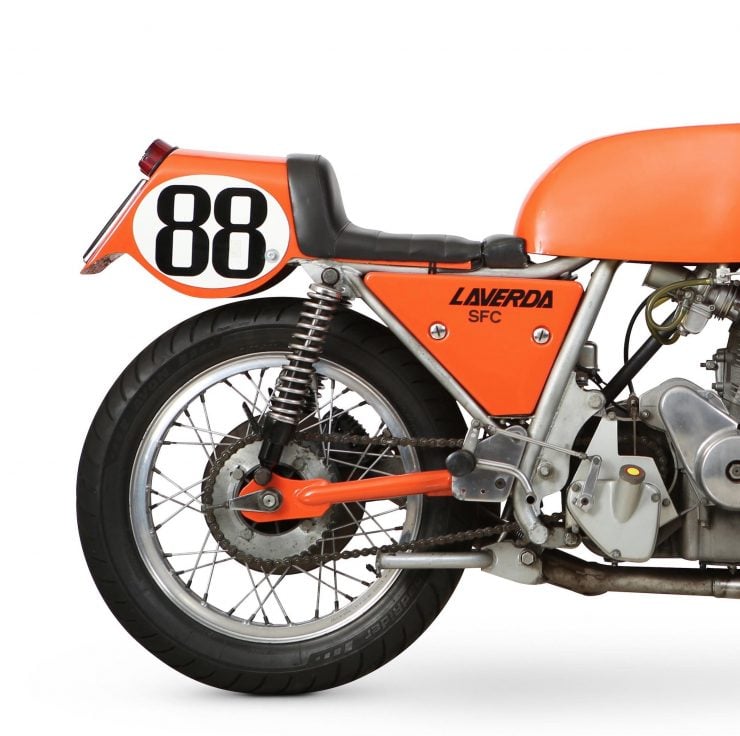 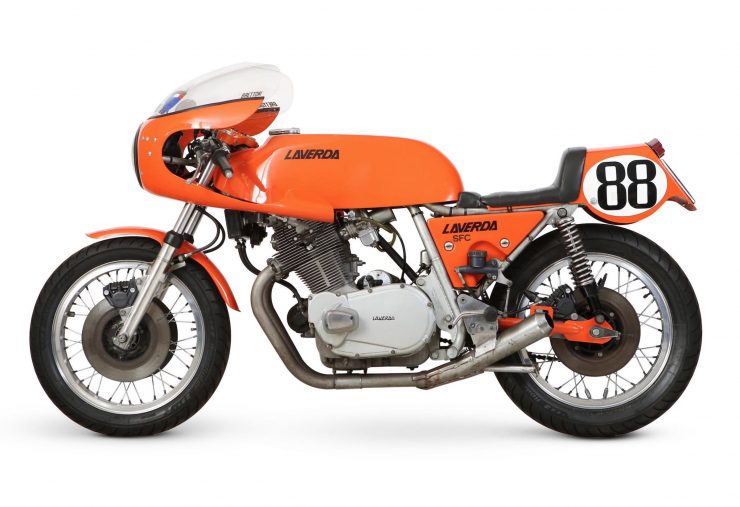 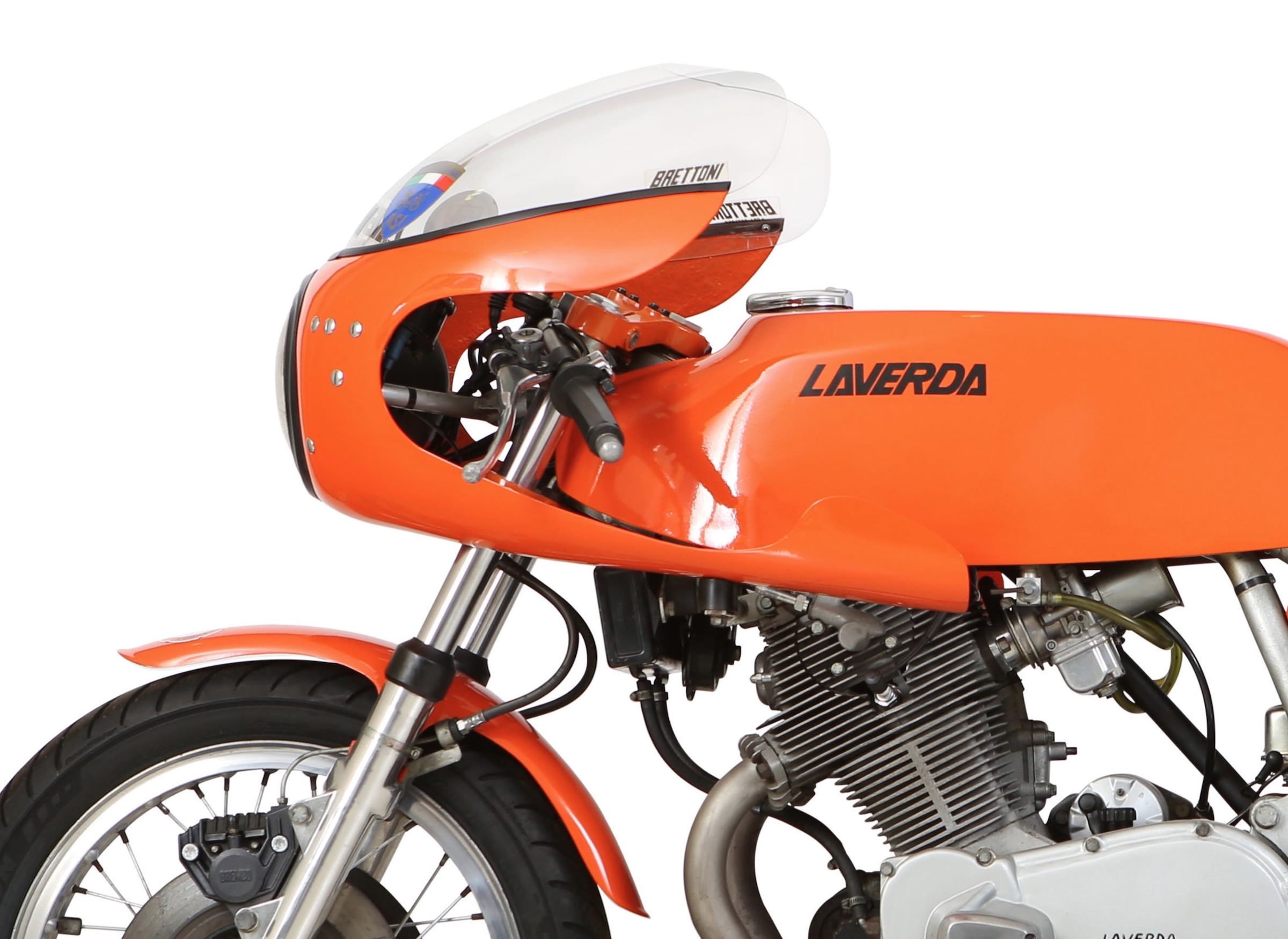