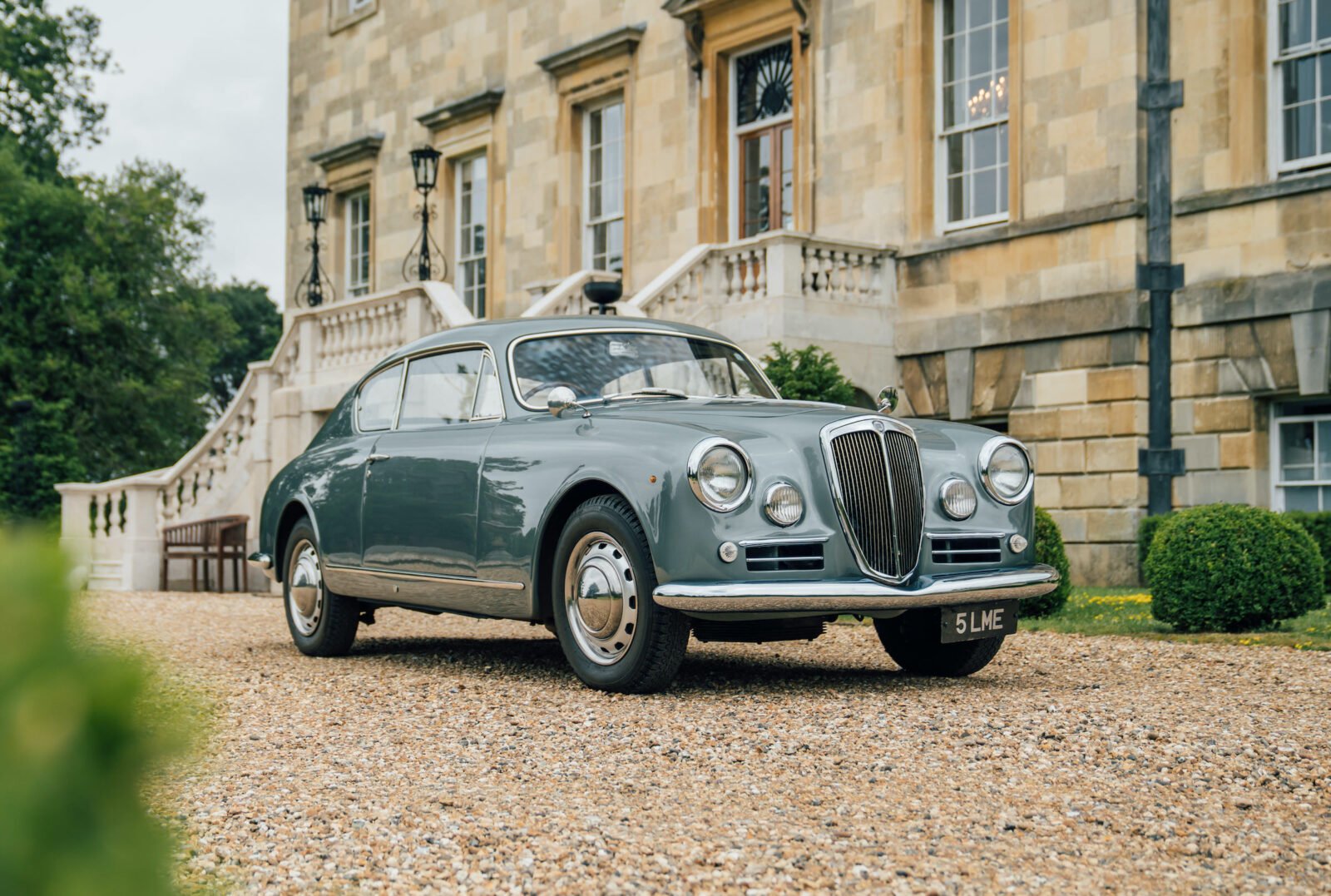 The Lancia Aurelia B20 GT is a car perhaps best known for its good looks. Truth be told it should also be known for both its trailblazing engineering and its remarkable motorsport successes in endurance racing, international rally, and cross country races like the Targa Florio and the Mille Miglia.

The elegant and unmistakably Italian styling of the Aurelia B20 cloaks an advanced unit construction body, a rear-mounted transaxle for better weight distribution, independent front and rear suspension, the first V6 ever used in a production car, and the first set of radial tires ever used on a production car.

Fast Facts – The Lancia Aurelia B20

The Lancia Aurelia first appeared as the B10 model in 1950, a conservative looking four-door sedan that was notable for its 60º V6 engine under the hood and its excellent handling thanks to its independent suspension and and balanced weight distribution.

It was clear that a more sporting version of the car was needed, so it’s no surprise that the B20 coupe was already in development, being unveiled for the first time at the 1951 Turin Motor Show with a price tag of 2,600,000 Lira, a considerable sum by the standards of the day. 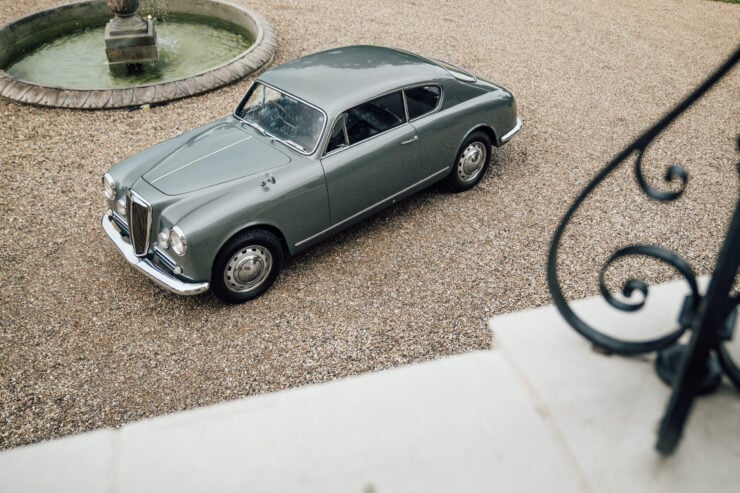 The beautiful styling of the Aurelia B20 cloaks some sophisticated engineering by the standards of the 1950s.

Between 1950 and 1958 Lancia would release the B10 sedan, the B20 coupe, the B22 sedan, and the B24 spider. Of these the most popular today are the B20 and the B24, though the entire model family has enjoyed a steady rise in popularity as they’re discovered by more and more collectors.

The Aurelia B20 – Competition

By the standards of the era the Aurelia was remarkably advanced, perhaps unsurprising given that the chief engineer at Lancia at the time was none other than Vittorio Jano – the man who had built the Grand Prix-winning Alfa Romeo P2 and P3 cars before moving to Lancia, then later on to Ferrari where he designed both V12 and V6 engines that were used extensively in both road and race cars.

The engineering that went into the road-going Aurelia wasn’t wasted, modified versions of the car were used extensively in competition throughout the 1950s with a great deal of success.

The Aurelia B20 would take a class win in the 1951 24 Hours of Le Mans as well as a hard fought second at the Mille Miglia in the same year. The car would later take the first three places in the 1952 Targa Florio, it would win the Lièges-Rome-Lièges in 1953, and it would take a 1-2-3 victory in the Coppa della Toscana.

Perhaps the most notable win for the Lancia would be its outright victory at the 1954 Monte Carlo Rally with Louis Chiron (driver) and Ciro Basadonna (navigator). 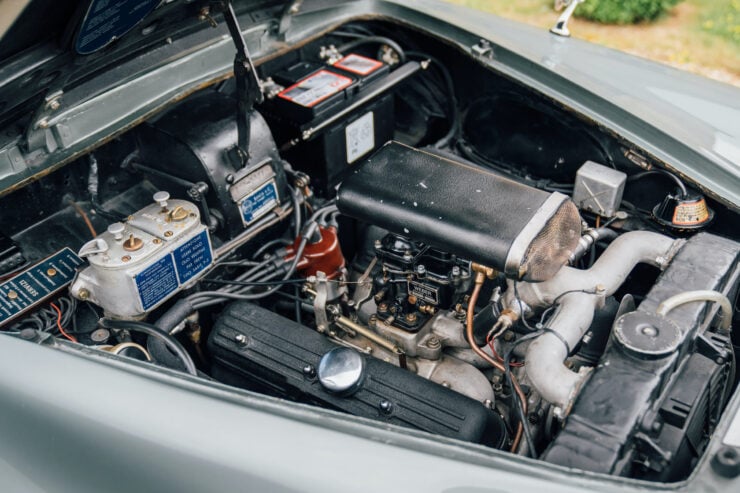 The Aurelia was fitted with the first V6 ever used in a production car.

By the standards of the early 1950s, the Aurelia B20 was an engineering tour de force. It was designed with unitary construction, a rear transaxle, and a multi-link rear suspension.

This transaxle would incorporate the clutch, transmission, and differential, and the two rear drum brakes would be mounted in-board to the side of the housing to reduce unsprung weight. Coil springs were used on the rear of early cars with traditional sliding-pillar suspension up front.

Later examples of the Aurelia from the third series onwards would receive the more powerful 2.5 liter (2,451cc) version of the 60º V6 and from the fourth series on the cars would receive a de Dion tube rear suspension.

The very first Aurelia B10s from 1950 where making just 56 hp with their 1.8 liter V6s, by time the sixth series was released in 1957 the engines had increased in size to 2.5 liters and were capable of a far healthier 112 hp with notably increased torque, exactly twice the power of the first cars.

The Aurelia model family would prove very successful for Lancia, over 18,000 of them were made and they set the company on a trajectory that would see them enjoy significant successes in the decades to come. 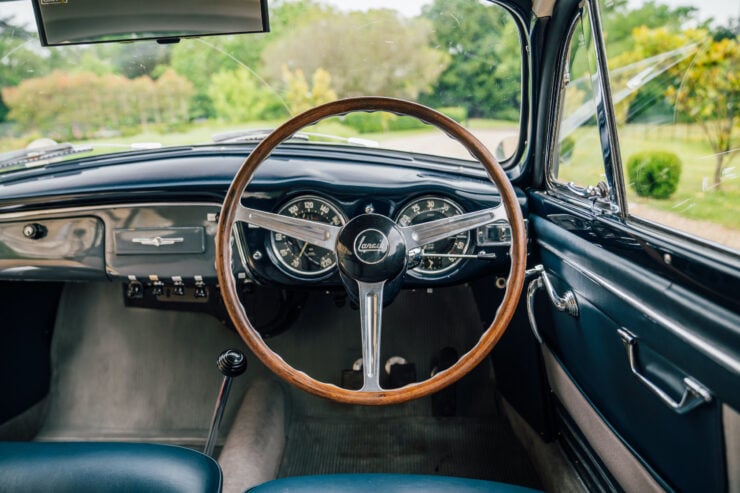 The car you see here is from the sixth and final series of production, as a result it’s fitted with the uprated 2.5 liter V6, the de Dion tube rear suspension, additional sound deadening, and opening front quarter windows.

This B20 has a fascinating history, it was imported by the UK distributor, Lancia England Ltd, and used as a demonstrator and press car. Interestingly a road test of this very car  was featured in the 8th of November 1957 issue of Autocar:

“In appearance it is classically stylish without need of ornament, and the general standard of finish, of both bodywork and mechanical components, is almost beyond criticism; without doubt it is one of the most desirable sporting cars of the decade.” – Autocar

The car was later fully restored in Italy in 1992 before returning to the United Kingdom in 2008 when it received a recommissioning by marque specialist Omicron Engineering. The car is now being offered for direct sale by RM Sotheby’s for £190,000 and it’s currently based in Chedburgh, Suffolk.

If you’d like to read more about this car or enquire about buying it you can click here to visit the listing. 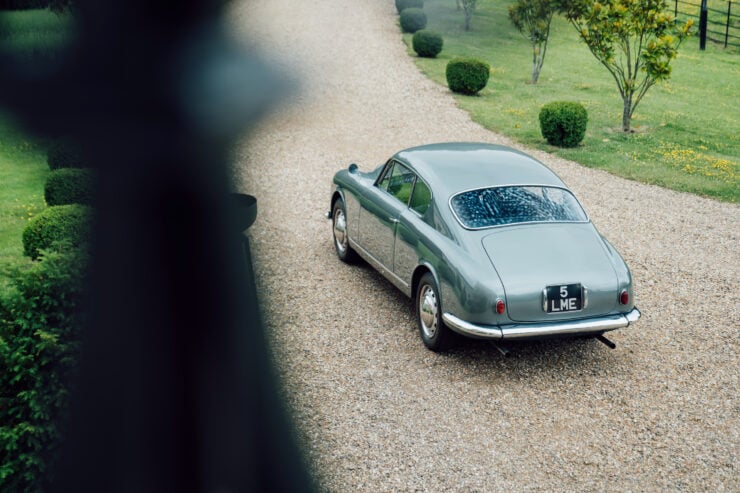