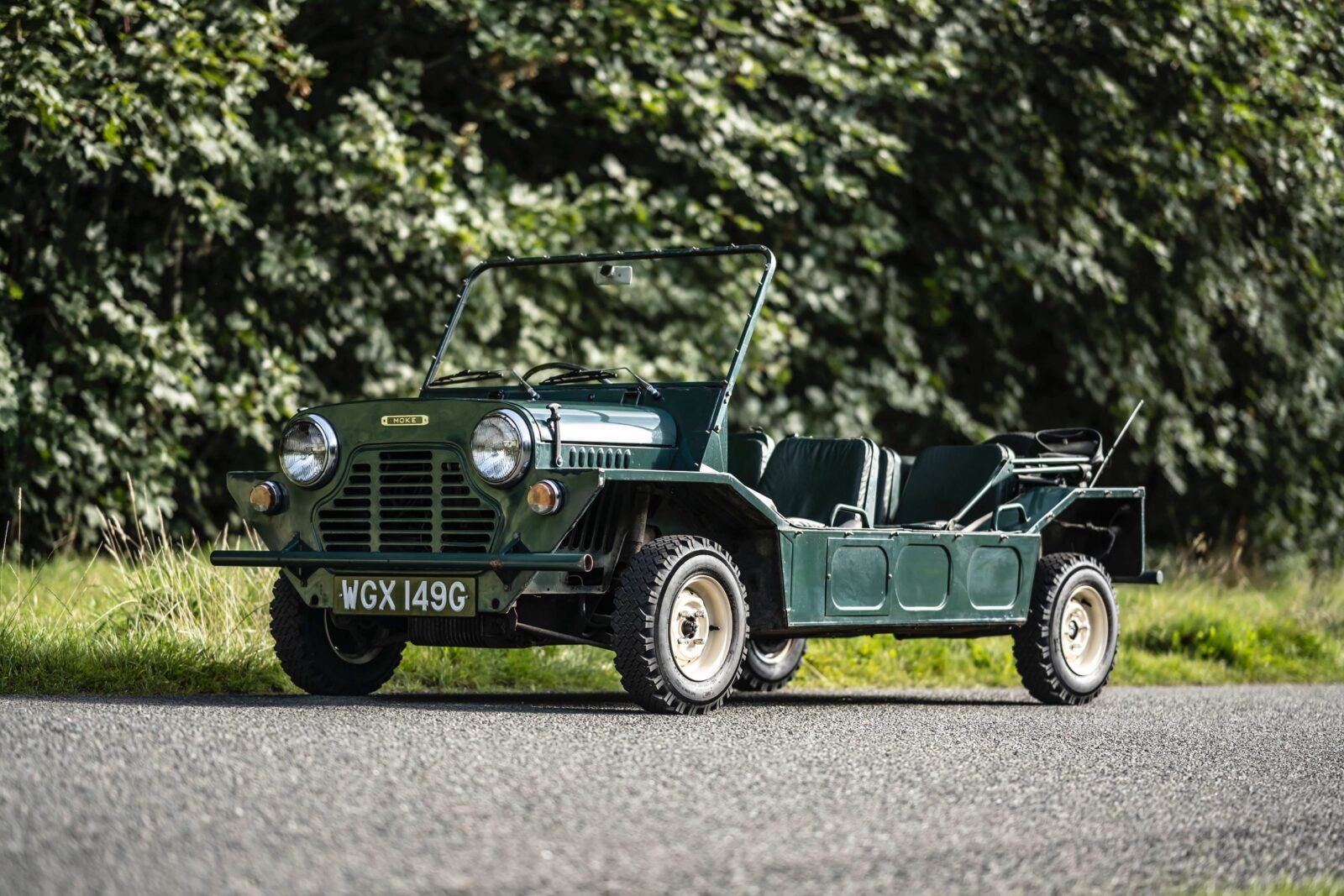 It’s hard to argue that the Mini Moke isn’t one of the most fun cars ever put into production. The truth is, the original military intentions for the Mini Moke were destined for failure before the blueprints were ever finalized, but the vehicle was wholeheartedly embraced by civilians – and it still is today over 57 years after it was first introduced.

The Moke may be the lightest car ever driven by Bond in the famous 007 film franchise, James Bond (Roger Moore) drove a white Mini Moke in the 1973 film Live and Let Die on the fictional island of San Monique. Many Mokes would be used as rental cars on many tropical islands, and some still are.

When Sir Alec Issigonis and John Sheppard originally developed the Mini Moke it was to fulfill unfinished business for Issigonis, who had designed a parachute-deployable, amphibious military vehicle called the Nuffield Guppy in the 1940s. WWII had ended before the unusual vehicle could see service. 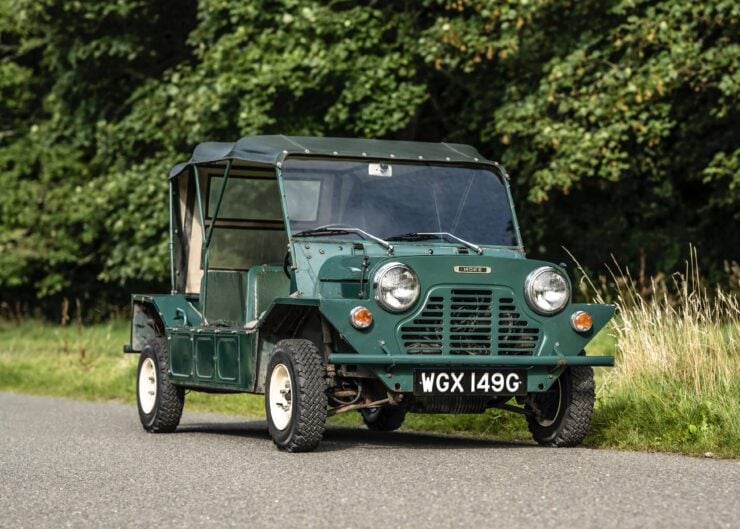 The Mini Moke handles much like a road-legal go kart, giving them a no-frills driving experience that can be hard to beat.

The desire to create an ultra lightweight version of the Mini for use as a parachute-deployable vehicle makes sense until you remember that the Mini has very low ground clearance – only approximately 6 1/2 inches (16.2 cm) with no load.

Issigonis and Sheppard did their best despite this limitation, even going so far as to show four soldiers getting out of the car and physically carrying it over obstacles, but the British Armed Forces never placed any significant orders.

That said, there were a few mysterious Mini Mokes used by British forces during the Falklands War, but further information on them is hard to come by. One country that did use the Mini Moke in its armed services was the Royal New Zealand Navy, they issued one car to each of their larger ships, including the HMNZS Canterbury, which would then be used on shore at various ports of call.

The simple design of the Mini Moke made it relatively simple to mass-produce. Just as with the Mini, the engine and gearbox are a single unit mounted transversely (sideways) that drive the front wheels. The chassis is essentially just a flat steel floor with box sections on the left and right, the left side contains the fuel tank and the right side contains the battery and a lockable storage box.

In order to keep weight down the interior of the Moke was kept as spartan as possible, though simple fabric tops with clear plastic side windows were available to help keep the sun of rain off depending on your local weather.

Mokes proved popular as holiday rental cars and saw use as far afield as Mauritius, St Barth, St Tropez, Barbados, Macau, and on Australia’s Magnetic Island where you can still hire a Moke to this day.

A number of different engine versions were offered in the Moke over its production run, starting with the 848cc unit also used in the Mini and moving up to the 998cc, 1098cc, and 1275cc engines – all with 4-speed manual transmissions. 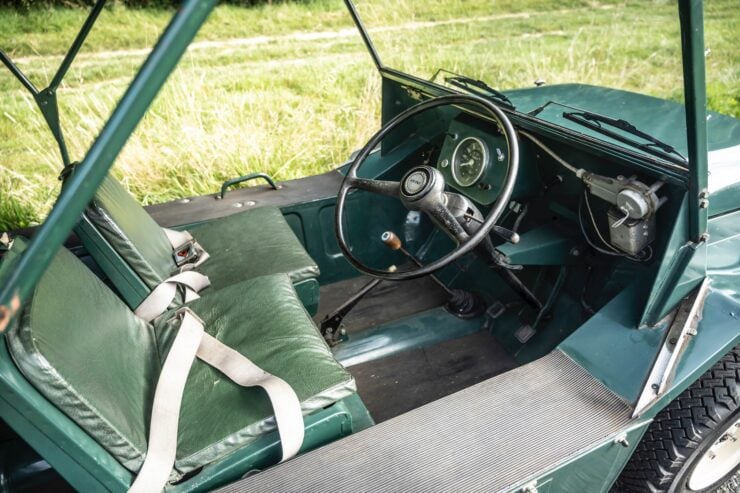 The open air driving experience of the Moke has long made them popular in sunny holiday destinations.

The car was originally produced in Britain from 1964 until 1968 however sales were slow, possibly due to the fact that the regular Mini was a far better option given the local weather conditions. Production was set up in Australia where it flourished from 1966 until 1981, local versions were produced with more powerful engines, more comfortable seats, and larger 13″ wheels giving better ground clearance – the original wheels had been just 10 inches.

Production shifted to Portugal in the early 1980s where many thousands were made, the rights to the Moke and the equipment to build it was then sold to Italian motorcycle company Cagiva who moved production to Italy. Sadly full-scale production would never restart.

More recently there have been a number of firms vying to bring the Moke back into production, Moke International is the official owner of the rights to the Moke, and they’re selling an updated version that you can order now.

The Moke you see here is a rare original British example from 1968, finished in its factory-applied Spruce Green paintwork and a set of 10 inch “reverse-rim” Mini Cooper steel wheels.

As an unrestored car this Moke does show some signs of age, as one would expect, however the overall level of preservation is remarkable given its age of 53 years.

As you would expect this car is powered by the 848cc A-series inline-four cylinder engine producing 45 bhp, feeding power to the front wheels via a 4-speed transmission.

If you’d like to read more about this car or register to bid you can click here to visit the listing on Collecting Cars. It’s currently being auctioned live and it’s based in Surrey,  in the United Kingdom. 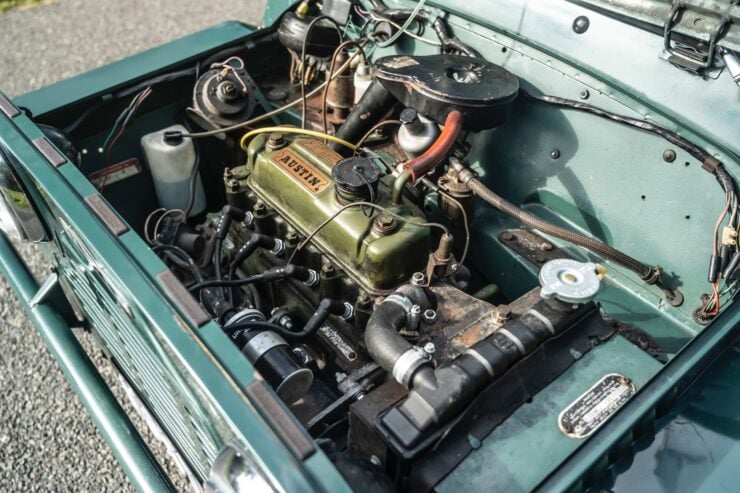 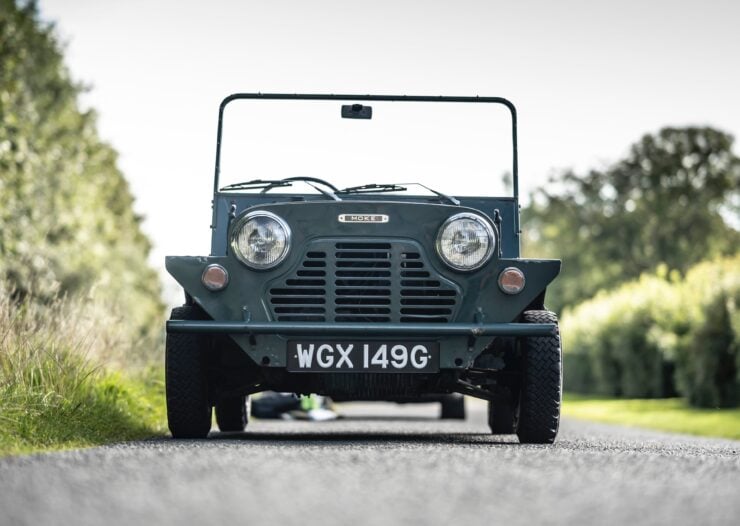 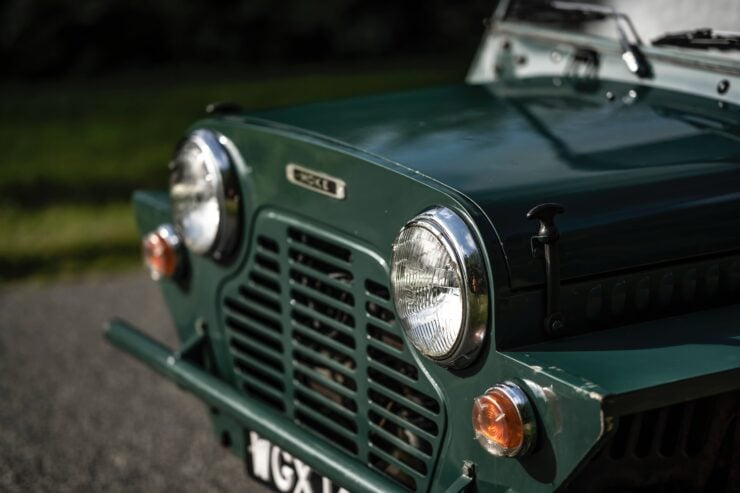 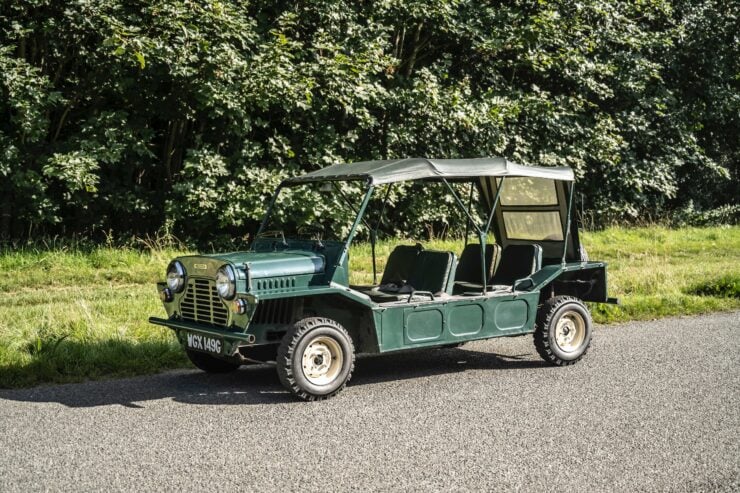 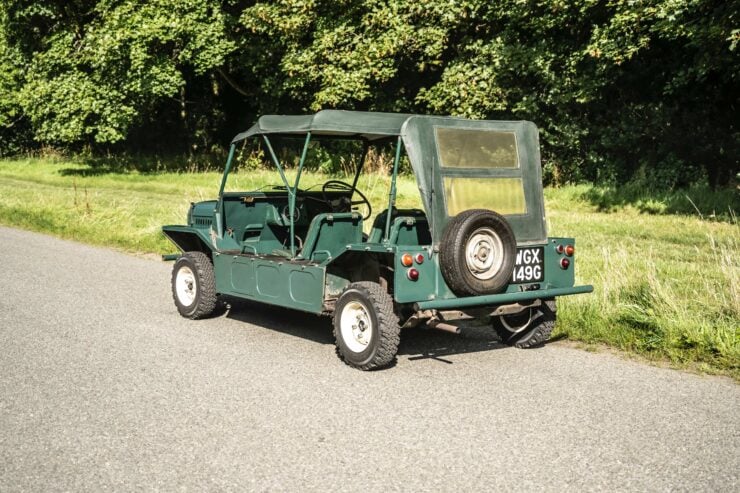 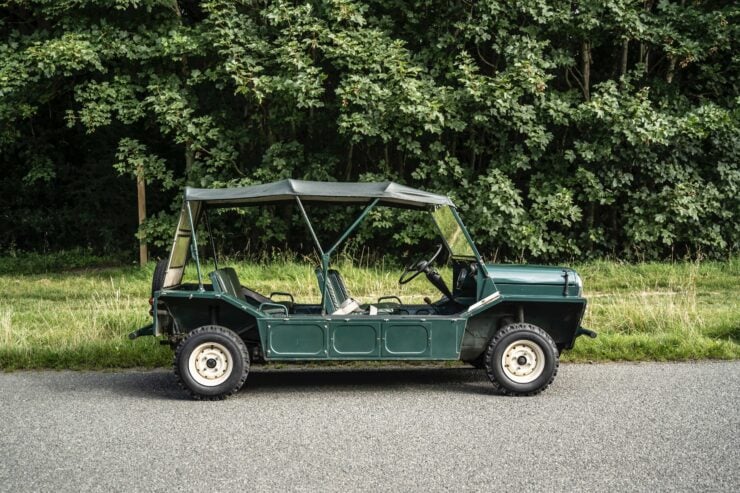 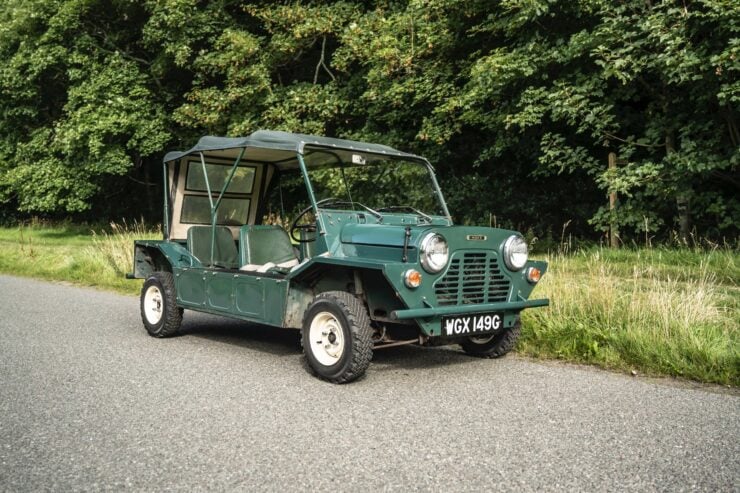 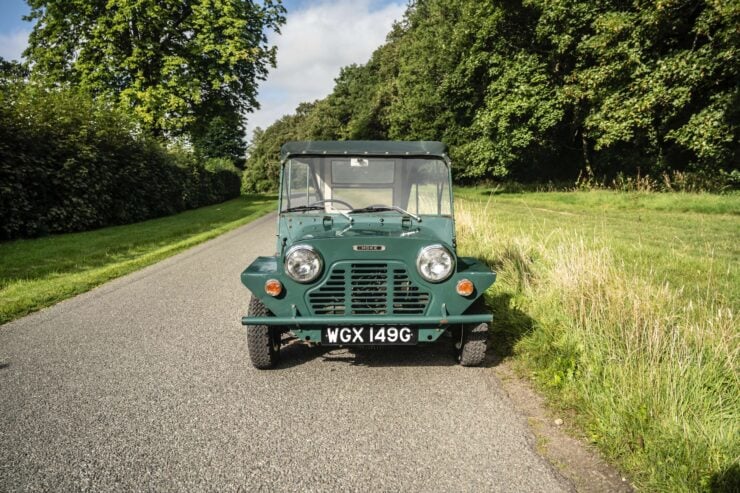 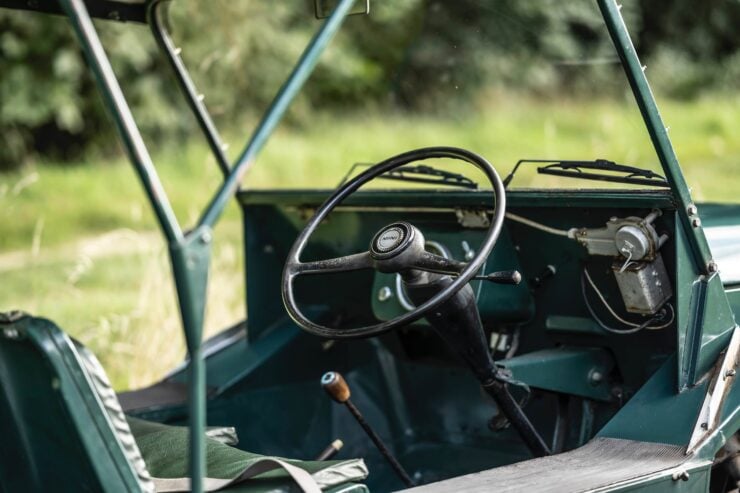 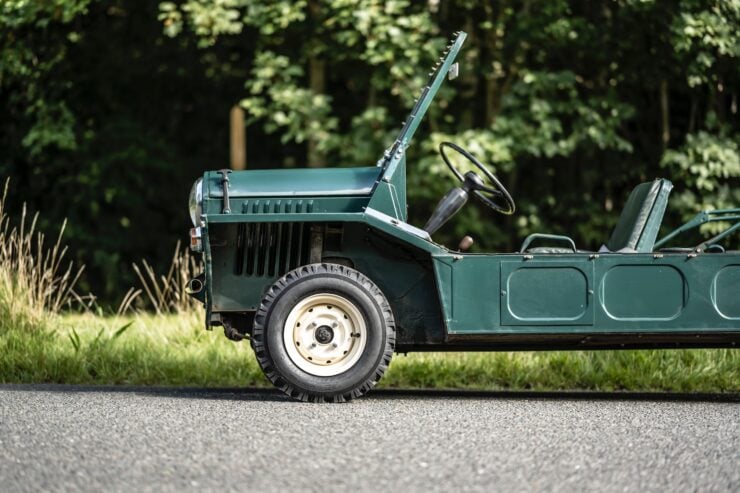 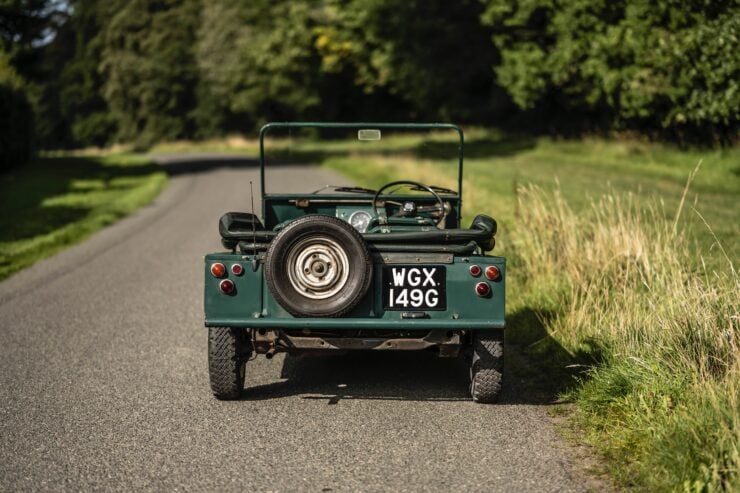 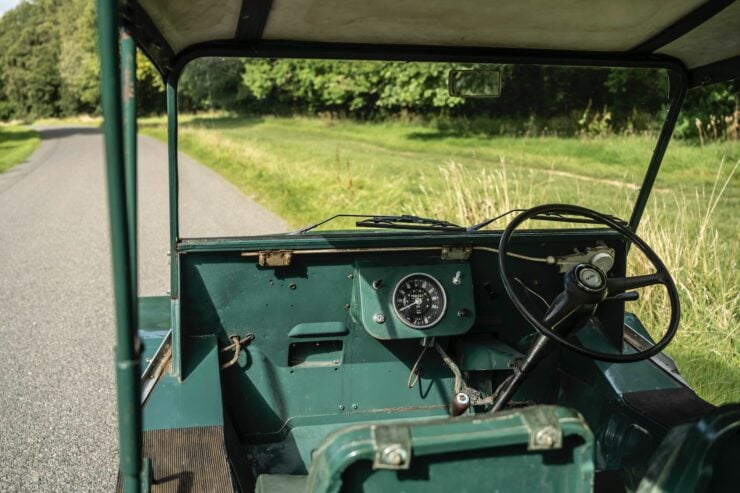