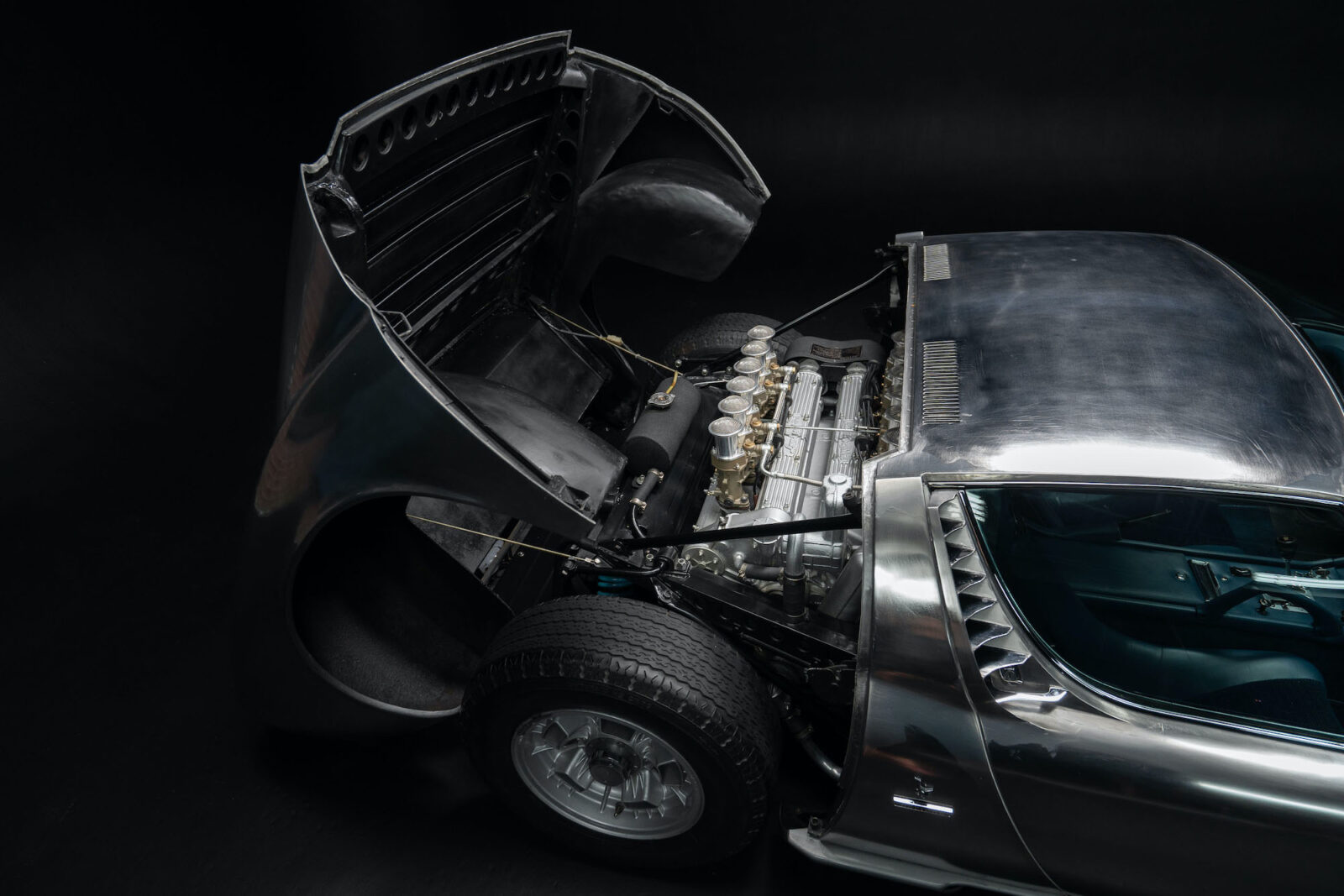 This Lamborghini Miura P400 S was hidden away in a California Bay Area warehouse for well over 40 years, a victim of a minor fender bender that had seen it laid up for repairs that wouldn’t happen until it was rediscovered four decades later.

The early history of this Miura is fascinating, it was bought by a wealthy Iranian family and shipped to their daughter – a 19 year old coed attending college at University of California, Berkeley.

Their plan was for their daughter to sell the car in the United States and return the money to them, possibly a way of discreetly getting money out of Iran. As you may have already guessed, things didn’t go according to plan after their daughter fell in love with the car, and drove it for two years accumulating 16,000 miles in the process.

The Lamborghini Miura was produced from 1966 until 1973, a relatively short eight year production run that fundamentally changed high-performance cars forever. 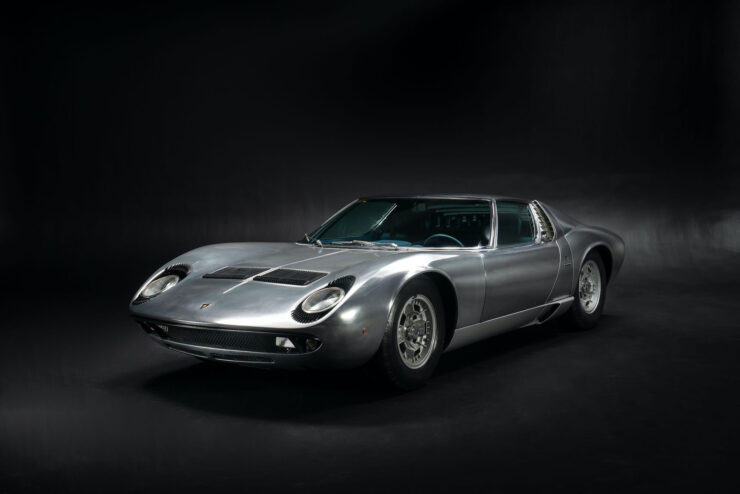 Above Image: The car now features a bare metal finish, it’ll be up to the new owner whether to paint it or keep it as-is.

Some label the Miura the first true “supercar,” and although that’s a hotly debated topic, there’s no denying that the car is one of the most influential supercars in history.

As with many revolutionary creations, the project to build the Miura began hidden away in a backroom away from the executives and the beancounters. In the mid-1960s the three top engineers at Lamborghini, Gian Paolo Dallara, Paolo Stanzani, and Bob Wallace spent their evenings and weekends developing a new car codenamed the “P400.”

They developed an advanced semi-monocoque steel chassis with the front and rear subframes bolted into place. The V12 engine was mounted in a rear-mid position, but unusually, it was mounted transversely (sideways) with the crankshaft parallel with the rear axle line.

In order to get everything packaged as tightly as possible and to avoid unfavorable weight distribution with a focus on mass centralization, the three men borrowed an idea from the humble British Mini. The 5-speed gearbox and V12 engine shared the same housing, this created a relatively small total package that could be slotted in behind the driver and passenger.

Company founder Ferruccio Lamborghini had made it clear he wasn’t interested in fancy, impractical sports cars, he preferred dignified V12 GT cars that gave Enzo Ferrari a run for his money. So it was with no small amount of trepidation that Dallara, Stanzani, and Wallace approached him with their design. 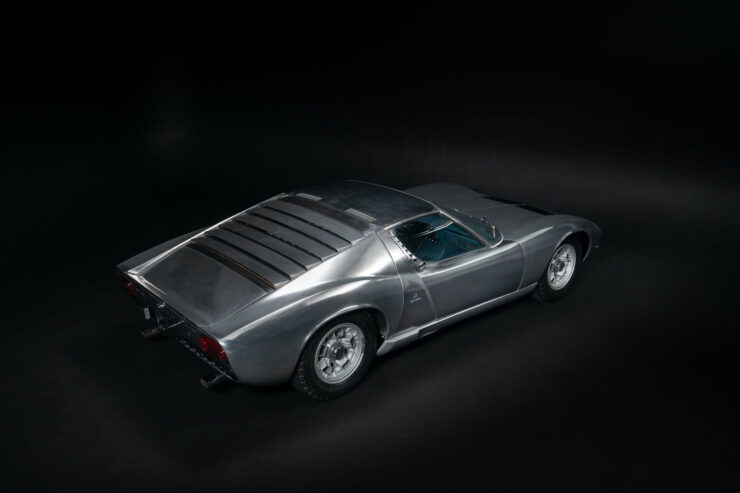 Above Image: The Marcello Gandini-designed curves of the Miura have been studied by car design students for decades.

They needn’t have been too concerned. Ferruccio is said to have quickly realized the value of such a car as a halo model for the company, and he approved prototype production.

The rolling chassis was first shown to the public at the Turin Salon in 1965 where it wowed the world, and Lamborghini were flooded with interest from people who wanted to order the car without having even seen its body.

Marcello Gandini at Bertone was tasked with styling the body of the Miura, his design would be instantly classed as one of the most beautiful of all time, a title it still firmly holds today all these years later.

Over the course of the Miura production run there were a number of variations as the model was evolved. The first was the P400, this stands for “Posteriore 4 Litri”, or “Rear 4 Liter,” a reference to the engine location and swept capacity.

The P400 would be followed by the P400 S which included a number of cosmetic revisions and a power increase of approximately 20 hp. After this the P400 SV arrived with a further 15 hp and later models in this line would be the first with the engine and gearbox using separate castings to ensure both could run the appropriate oil type.

The final iteration, though rare, was the P400 SV/J of which only six are believed to have been built. There were a few unusual one-off designs too, like the Jota, the Roadster, and a P400 SVJ Spider.

The car you see here is a rare Series II “transitional” P400 S that was factory-equipped with P400 SV features, it’s one of approximately 50 cars built in this way. 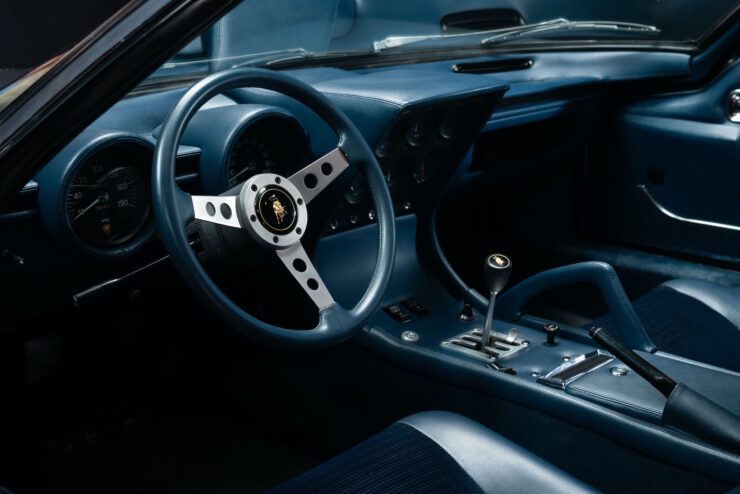 Above Image: Inside, the car has two seats, a gated manual transmission, ample leather upholstery, and plenty of gauges to let the driver know what’s happening in the engine bay.

Over the course of the production run just 764 examples of the Miura were built before it was superseded by the show stopping Lamborghini Countach in 1974. Today the Miura is considered one of the most collectible classic cars in the world.

This Miura has a more interesting history than most of its siblings, as mentioned in the introduction, this car is likely to have been used as a clever way of getting money out of Iran.

The car was purchased at the Lamborghini factory in Italy, and the buyers also received delivery of the car there before arranging to have it shipped to California so their daughter could sell it for them.

Although she did go through the effort of posting a classified ad for the car it wasn’t sold for one reason or another, and so she drove the car for two years as she attended her classes at Berkeley.

This was all brought to a halt after a minor accident resulted in damage to the front right headlight area of the car. The complexity of the repair was too much for local panel beaters at the time, due in so small part to the fact that the intricate clamshell aluminum hood needed to be shaped by hand.

The car was eventually purchased by a San Mateo body shop owner who had previously done minor repairs on the car, and he ordered the required parts for the repair from Italy. 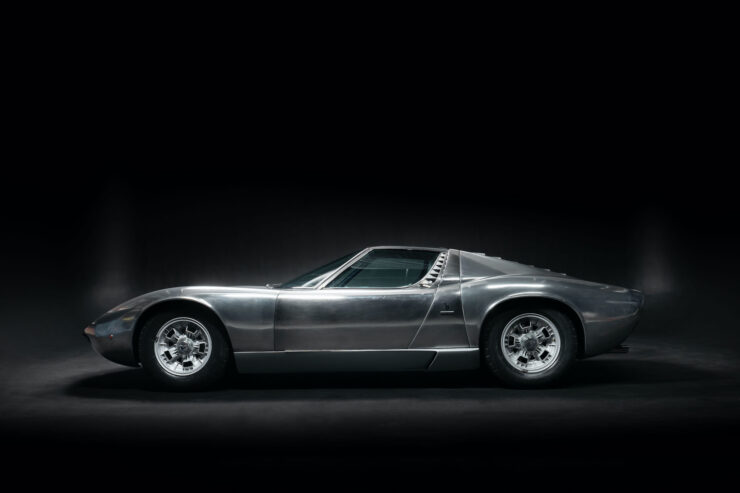 Above Image: The car remains so original that it’s still rolling on its factory-fitted Pirelli Cinturato CN73 tires.

The project froze at this point for over 40 years, the newly ordered parts and old damaged parts all remained with the car as it sat in the corner of a warehouse and gathered dust.

Fortunately the car was finally acquired by a Miura preservation specialist, who enlisted a team of experts to recommission the long-dormant car. Steve Beckman of California-based Beckman Metal Works repaired the bodywork damage over a period of eight months.

Chris Morgan of Morgan Images provided additional paint and bodywork repairs, he also stripped off the aged original paint and left the car as you see it today, showcasing its beautiful alloy body sections.

Lamborghini Miura specialist Jeff Stephan went through the mechanical aspects of the car repairing or replacing parts where needed. The fuel tank was removed and serviced, the fuel manifold was restored, the water and oil pumps were rebuilt, and the engine timing chain tensioners were serviced among other work completed. 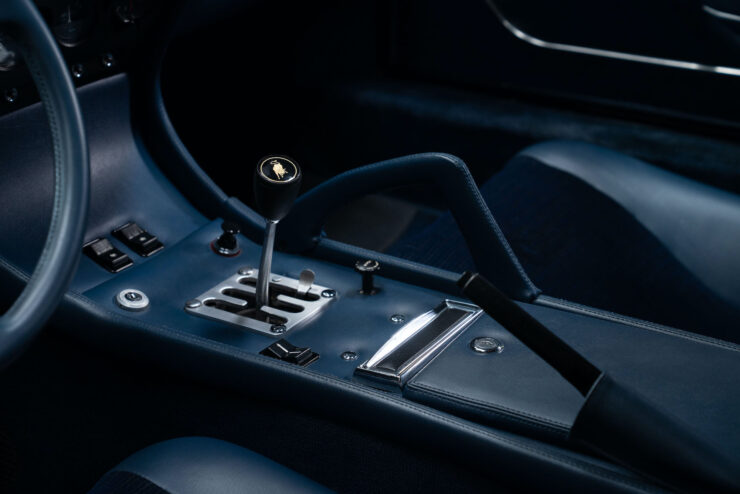 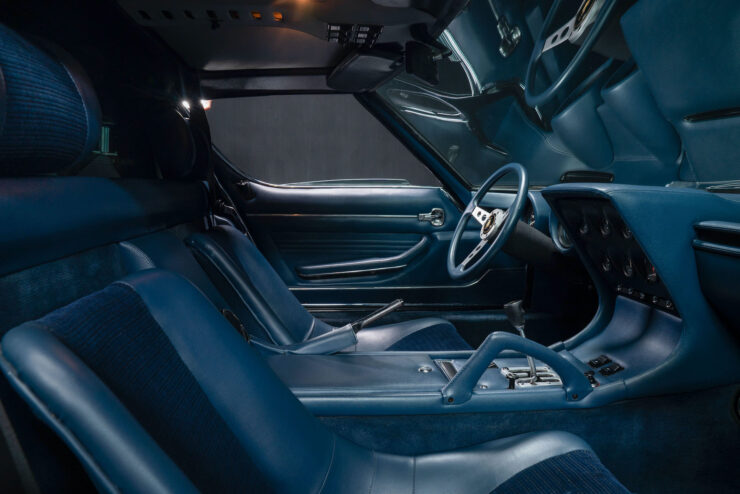 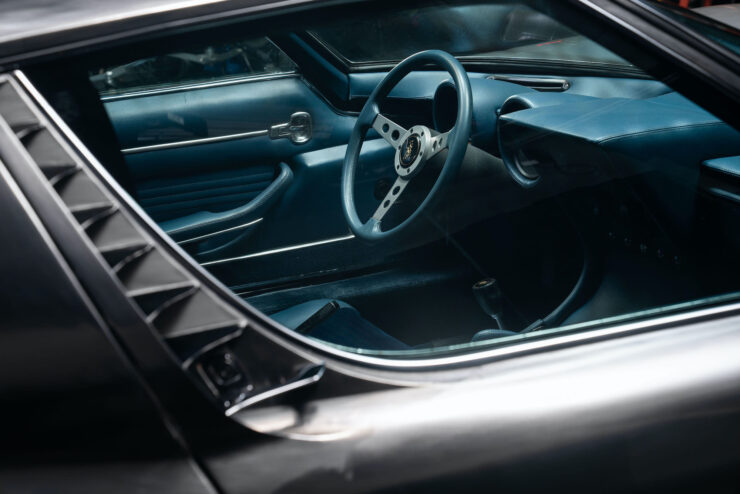 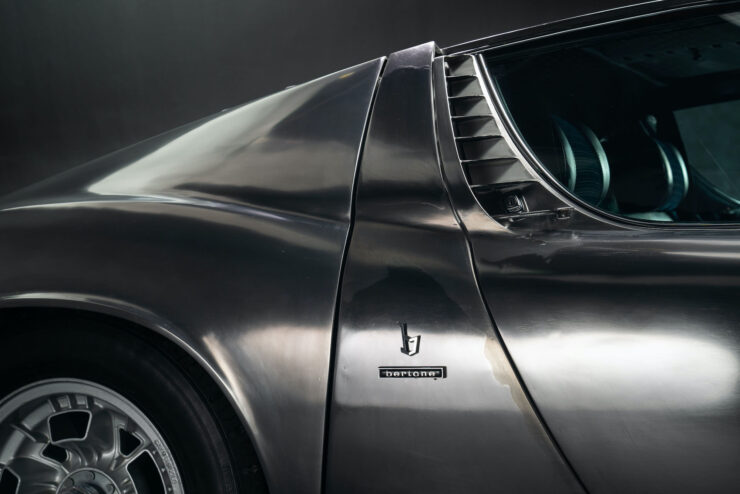 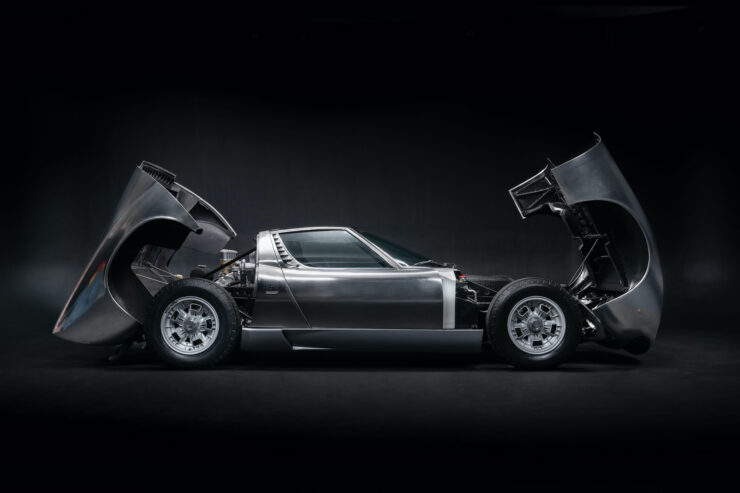 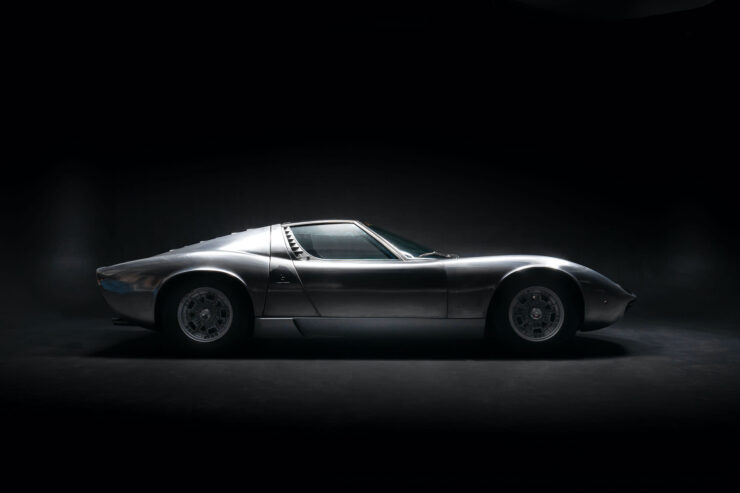 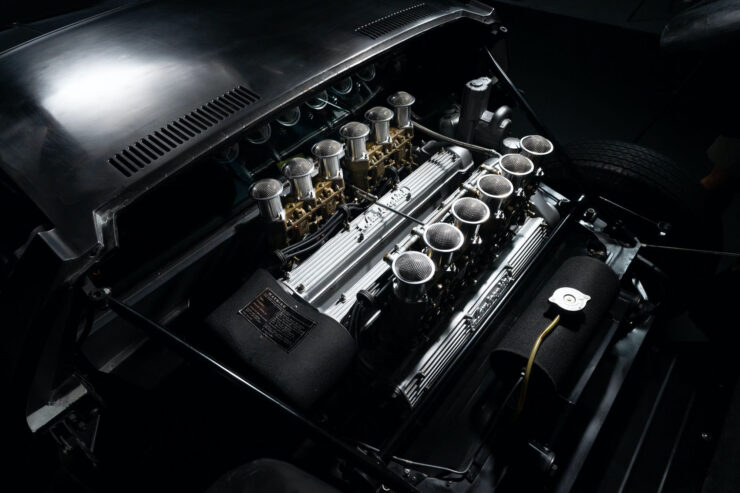 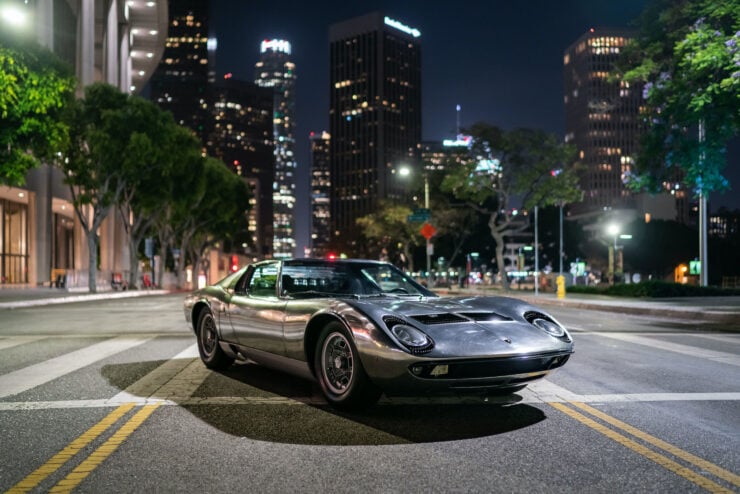 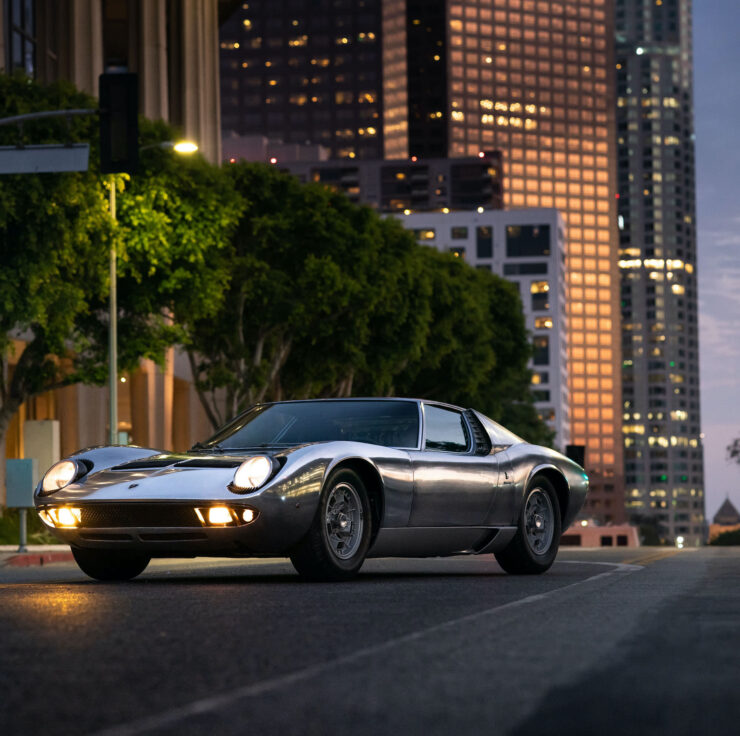 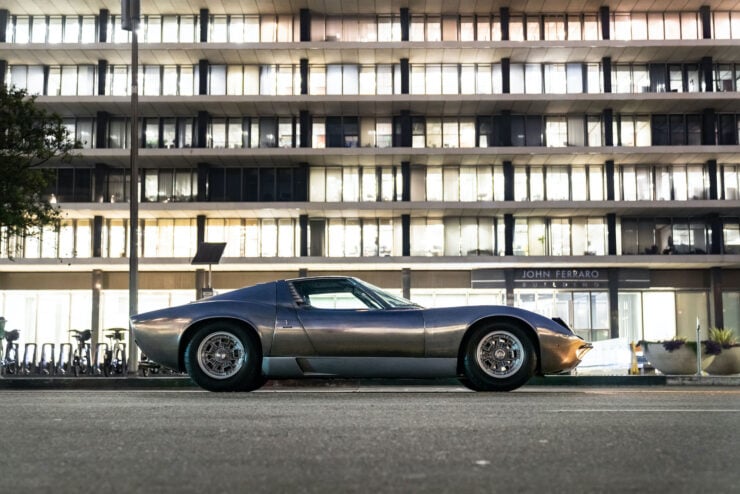 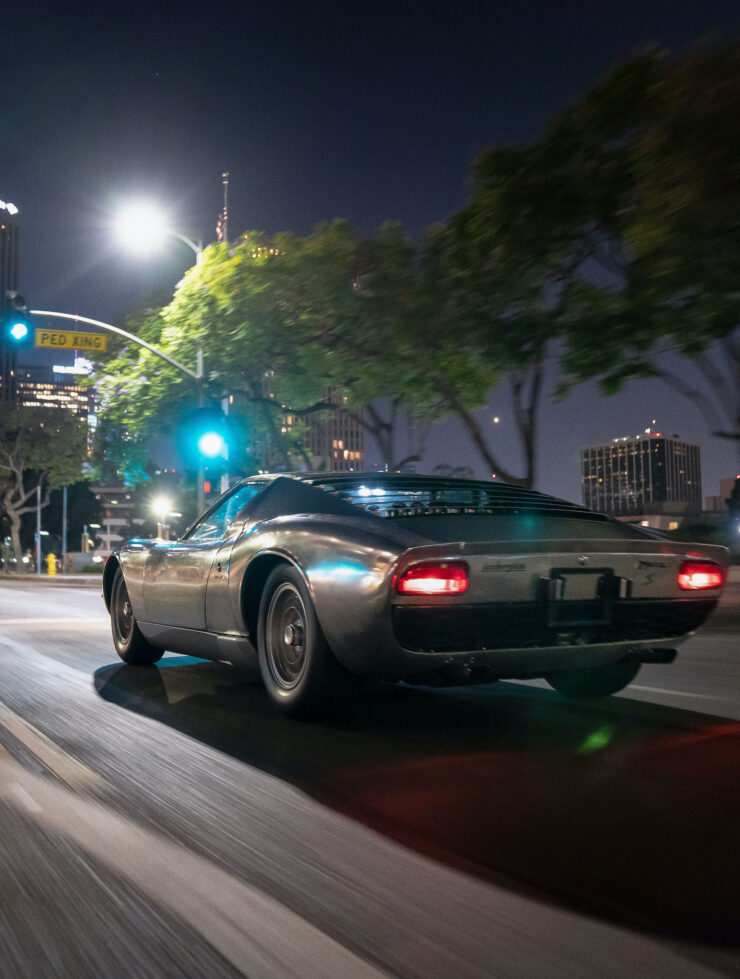 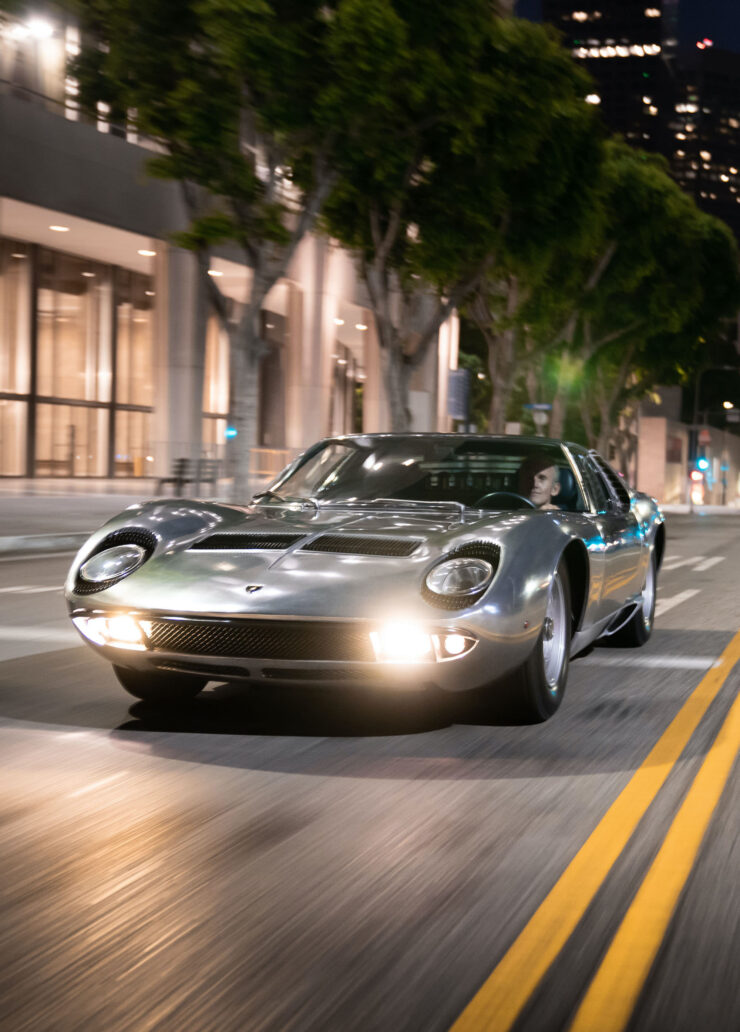