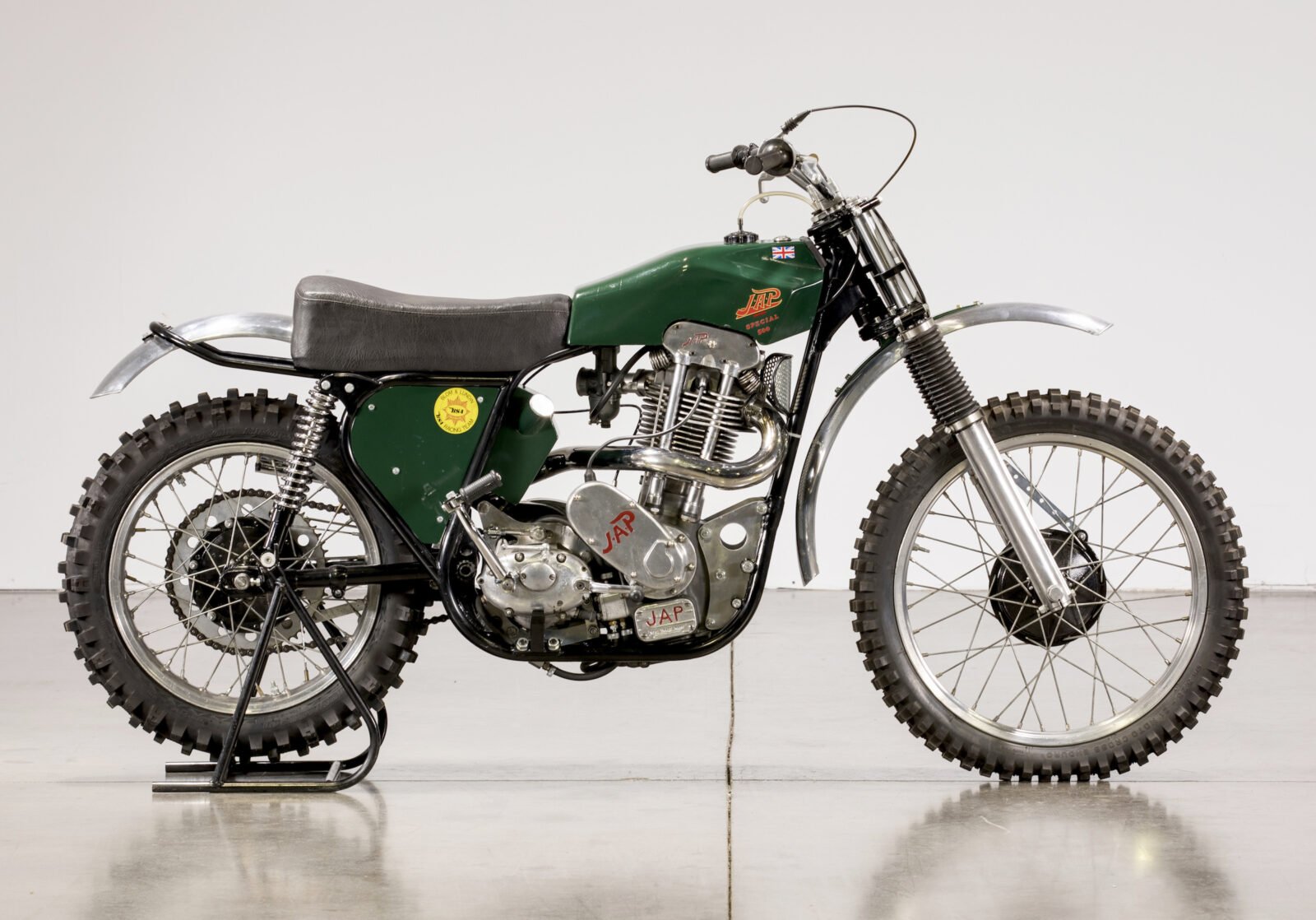 This off-road racing motorcycle is the only one like it in the world – it was built in Sweden by a motocross racer as a parts-bin special that was considerably quicker than most of its competition.

The bike started life as a BSA Gold Star, widely regarded as having one of the best motorcycle frames in the business in the 1950s.

The Gold Star was a dominant force on the race tracks of Britain, Europe, and the United States, it proved almost unbeatable in the Isle of Man TT Clubman class and still today the Gold Star is a force to be reckoned with in the world of vintage motorcycle racing.

It isn’t known exactly how this bike came to be, but we do know that a Swedish motocross racer sourced a single-cylinder JAP engine from a crashed midget race car, and set about installing it into his Gold Star frame. 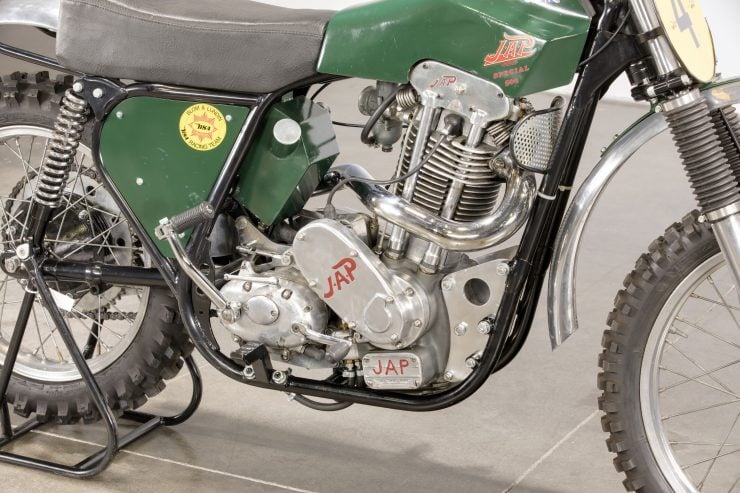 The JAP engine is named for the J.A. Prestwich and Company Limited, a British car and motorcycle engine manufacturer that had originally started out making scientific instruments, cameras, and projectors.

This focus on precision and fine detail would become invaluable when Prestwich began designing engines in 1902, and by any accounts their designs were the best in the world, with many of them seeing top flight professional racing use right through into the 1970s.

Some of the greatest motorcycles of the 20th century relied on JAP engines, including the Brough Superior SS100, and JAP-powerd machines claimed multiple motorcycle land-speed records many times – in both naturally aspirated and supercharged forms.

The 500cc single-cylinder engine used in this motorcycle was originally developed for use in midget racing cars. It runs on alcohol and it has lightweight magnesium crankcases with an aluminum cylinder and head. It’s one of approximately 60 that were built for midget racing in 1952, and it’s not known how many others survived. 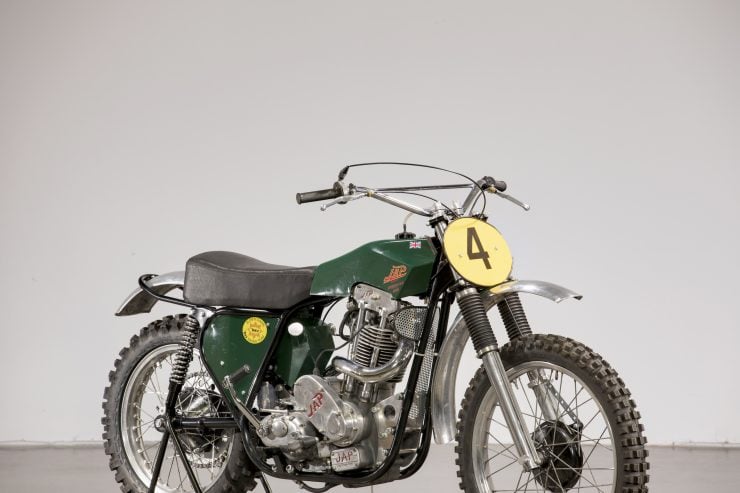 Although the BSA Gold Star frame is known for being able to take almost any engine, it was a stretch to fit the very tall JAP motor.

There’s very little room between the top of the engine and the frame’s top tube, and of course the engine mounting plates were made bespoke for this build as it’s highly unlikely anyone else has ever done the same transplant.

The forks and wheels used on the build were sourced locally from a Husqvarna motocross bike, and both the fuel tank and seat were made bespoke – the tank required special cutouts for the engine that now sits so snug it likely does a good job of heating the fuel.

As you would expect the bike has a single carburettor and a single straight exhaust pipe that crosses over from the right to the left side, and it sends power to the rear wheel via a 4-speed gearbox with a righthand side shifter.

Mecum will be offering the bike for sale in late January in Las Vegas, there’s currently no estimated value. and if you’d like to read more about the bike or register to bid you can click here to visit the listing. 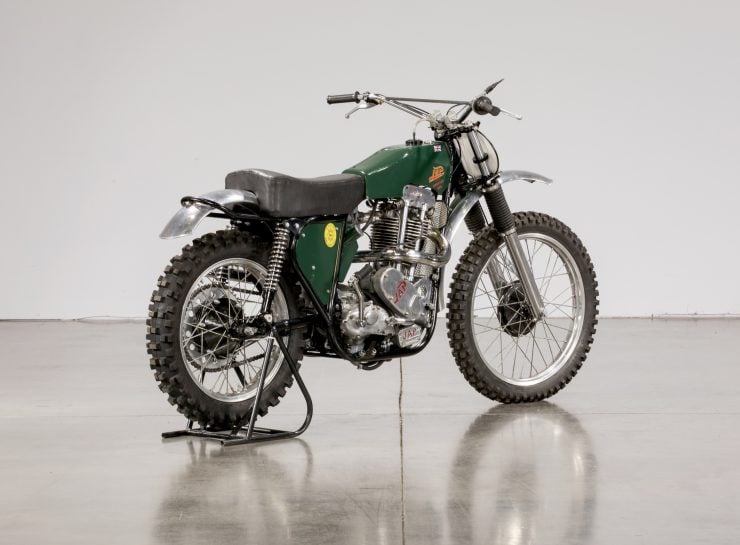 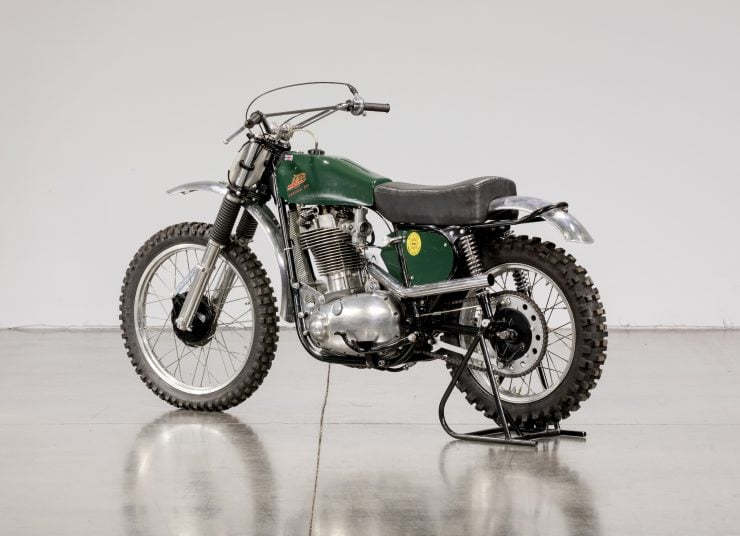 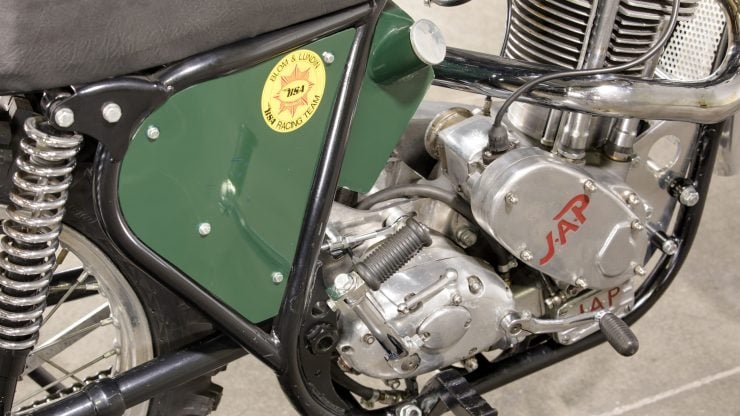 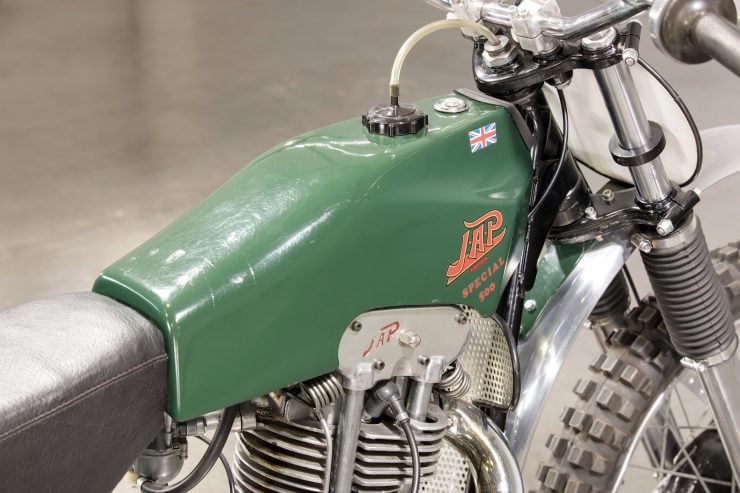 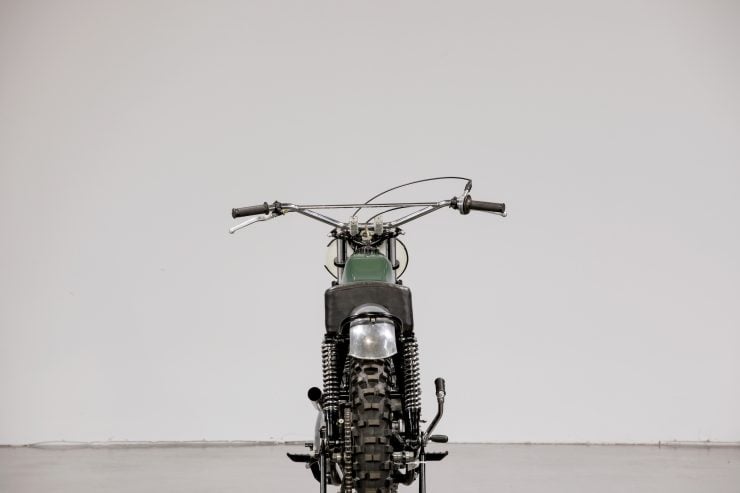 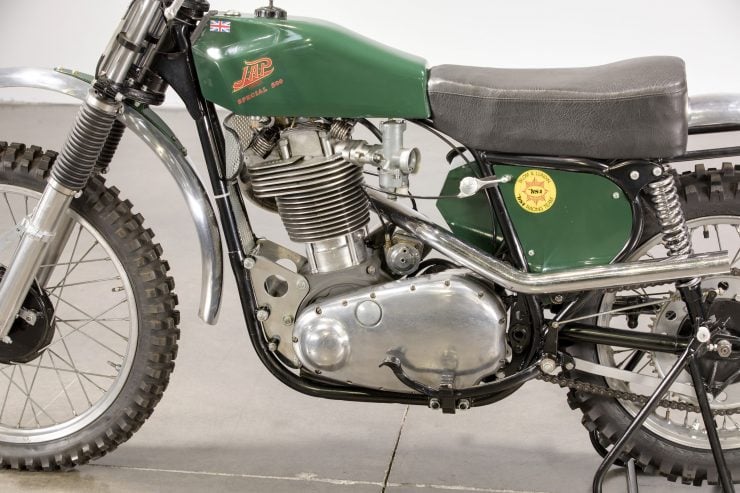 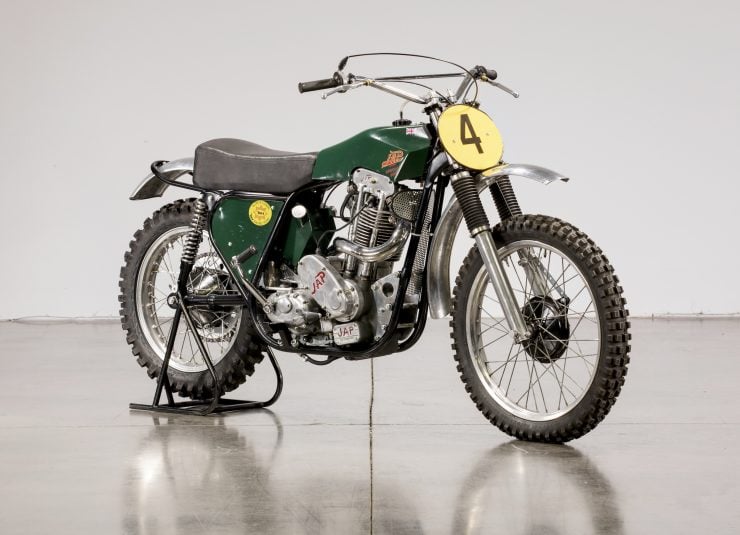 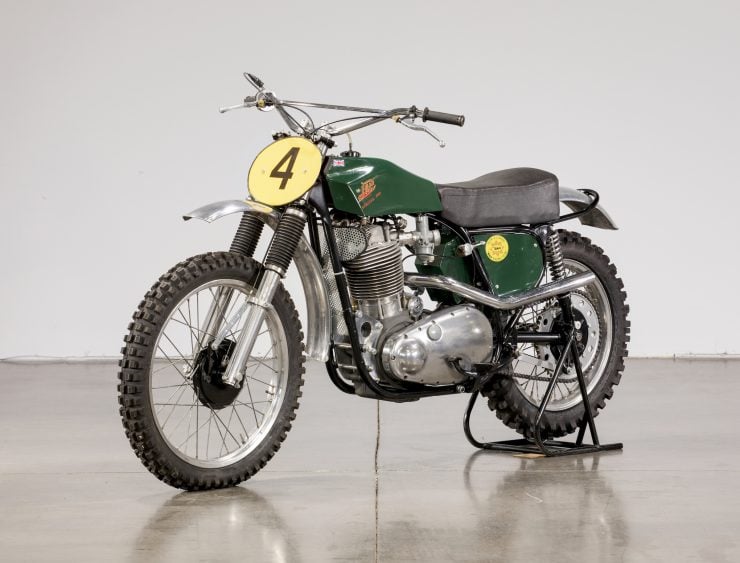 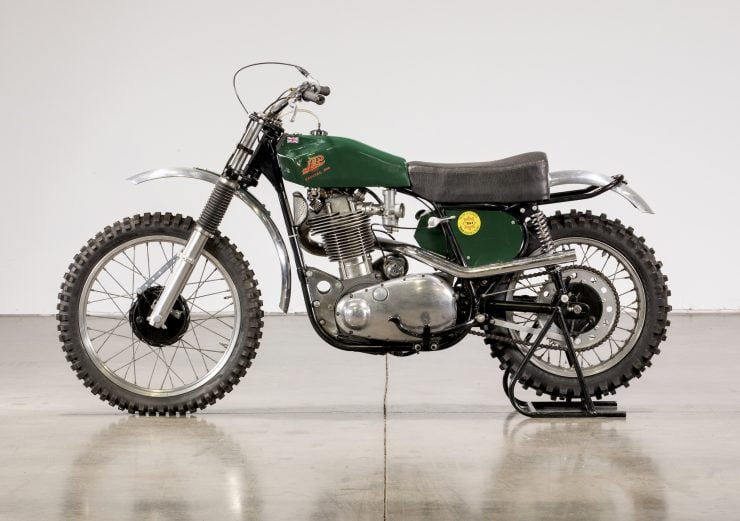 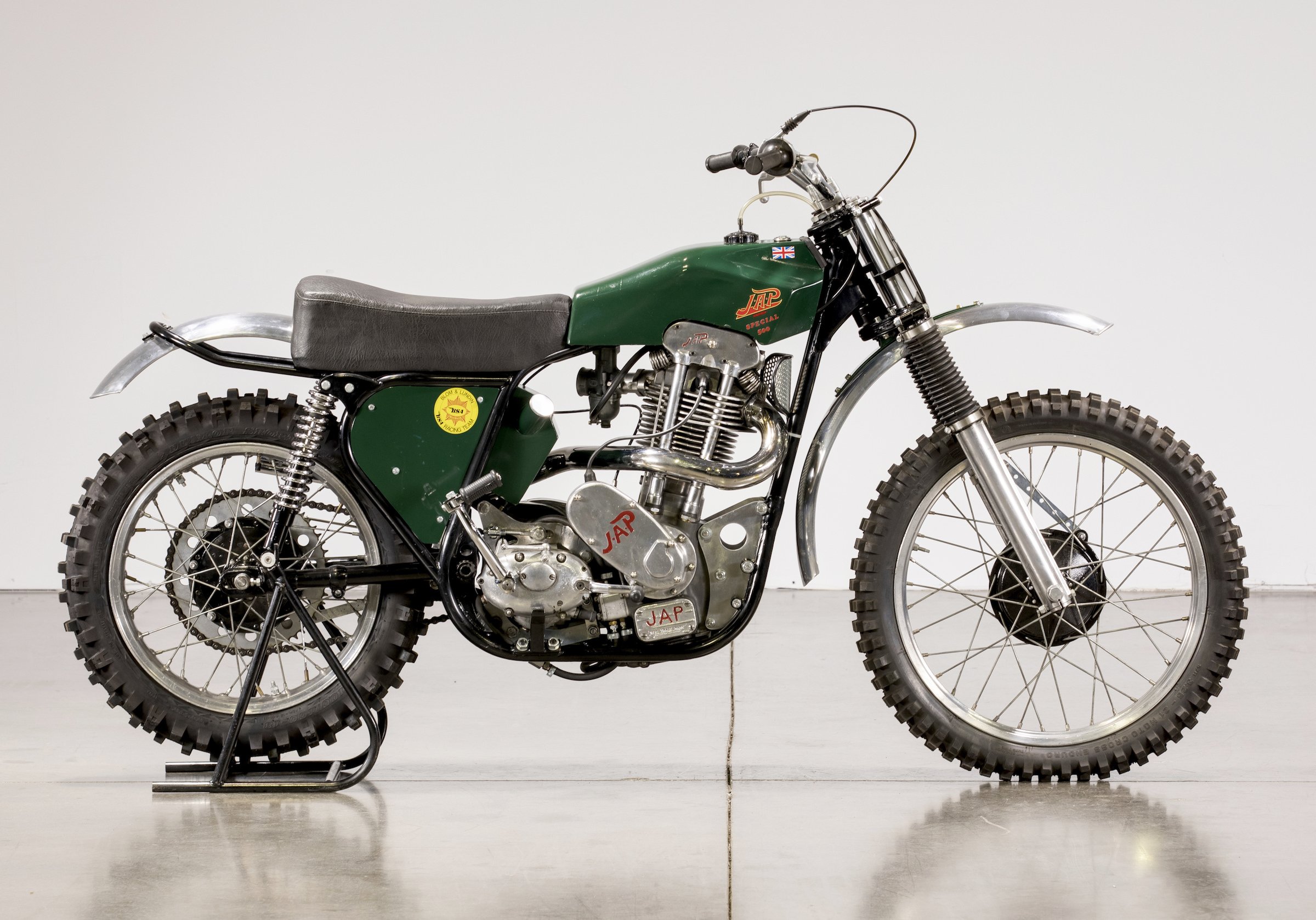