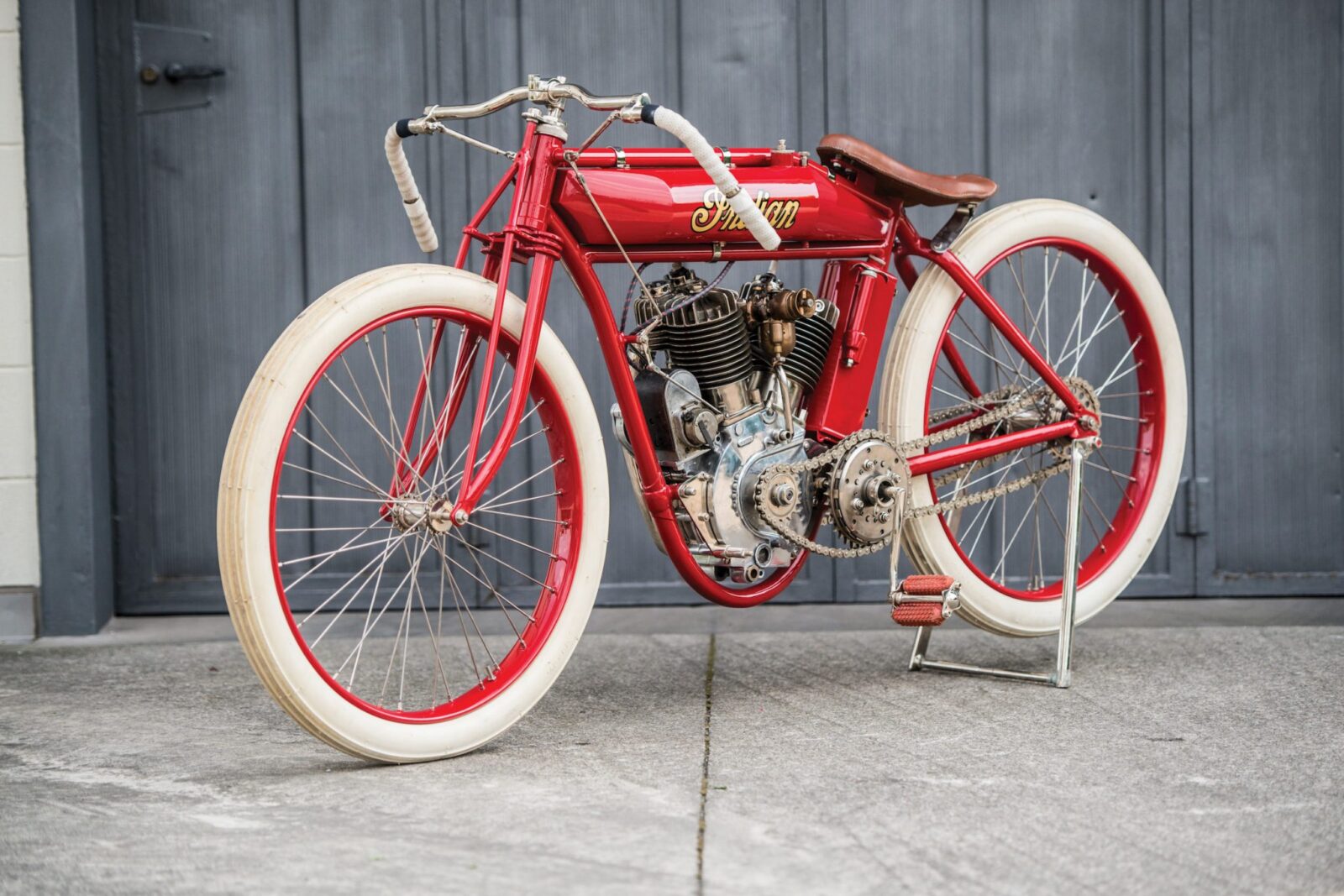 A Short History of Board Track Racing

Board track racing was one of the first mass-spectator forms of motor sport, it rapidly rose to popularity in the 1910s and peaked in the 1920s, before quickly disappearing forever during the difficult years of the Great Depression.

The first board track was the Los Angeles Motordrome (pictured below) built in 1910 in what is now the Playa del Rey district. It was a circular track with banked walls allowing riders to maintain high speeds, and it was wide enough to allow lots of spectator-pleasing overtaking. The design was closely based on the velodromes used for bicycle racing across the Atlantic in Europe, but the Americans were far more interested in the new fangled motorised bicycles – capable of speeds exceeding 100 mph.

The tracks were relatively easy and cheap to build, usually made from 2″ by 4″ lumber, with simple wooden support structures holding up the surface of the track, which was often angled at 45 degrees or more. In 1929, right before the Great Depression hit, there were 24 board tracks in various American cities (possibly more), the largest of which measured an impressive 2 miles long.

Although the wooden tracks themselves didn’t survive the economic crash, the concepts remain clearly visible in American motorsport today. Large oval shaped tracks (now made from concrete and asphalt rather than wood) dominate the racing landscape, and the focus on top speed thrills is just as strong as ever. 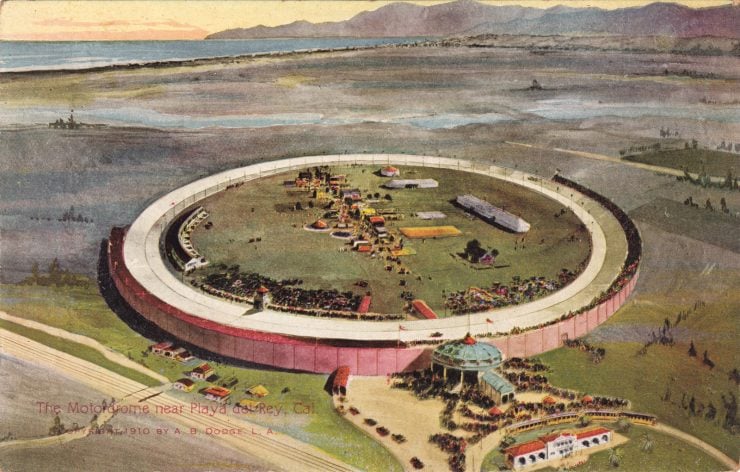 The Indian Powerplus was released in 1916 as an answer to the ever improving machines being built by Indian’s longtime rival – Harley-Davidson. The Powerplus represented a huge step forward for Indian, its engine was a new side valve flathead as opposed to the F-head inlet-over-exhaust engines that had been in use since Indian was founded (originally as the Hendee Manufacturing Company) in 1901.

The new side valve was more powerful, more reliable, and lower maintenance than its F-head counterpart. In order to show off these new characteristics to the American people Indian hired Erwin “Cannonball” Baker in 1915 to make a new attempt on the “Three Flags” record – a dash from Canada, across America, and into Mexican border town of Tijuana. He did it in 3 days, 9 hours and 15 minutes, setting a new record and doing absolutely no harm to Indian Powerplus sales across the country.

The Powerplus would stay in production from 1916 till 1924 – a remarkable feat of longevity during what was one of the motorcycle world’s most rapid eras of engineering development. It was replaced with the Indian Chief and the Indian Scout, but it retains a place very close to the heart of Indian fans due to its both its sales successes and its victories on the American board tracks.

The board track racer you see here is an original from 1919, it would have seen service on many of the wooden circuits of the era and unlike many of its brethren – it survived to the modern day.

Like all of the burgeoning motorcycle manufacturers in the early days of the industry, Indian recognised the importance of racing. And there was no bigger motorsport in the 1910s than board track racing – there would often be a hundred thousand or more in attendance, and newspapers would carry breathless play-by-plays of the races the next day. Winning races meant higher sales, a connection not lost on manufacturers.

Board track racers were almost invariably based on road-going machines, and this one is no different. It uses the 61 cubic inch (1000cc) flathead V-twin, and it benefits from the engine revisions made in 1917 to stop piston slap – the barrels were lengthened and the wrist pin was relocated to below the piston’s centre. The valve caps were finned from 1917 onwards also, to assist in cooling the heads.

Other than the small amount of give in the tire sidewalls, the Indian board track racers of this era had no suspension. Fuel tanks were installed between the two top frame tubes, the oil tank was mounted behind the engine, the saddle sat low and was angled backwards to allow the rider to scooch down as low as possible – the handlebars are angled downwards for the same reason.

We’ve seen values on these early racing motorcycles shooting upwards in recent years, so it’ll be interesting to see what this one sells for when it crosses the auction block with RM Sotheby’s on the 27th of May at the Villa Erba Auction. If you’d like to read more about it or register to bid you can click here to visit the official listing. 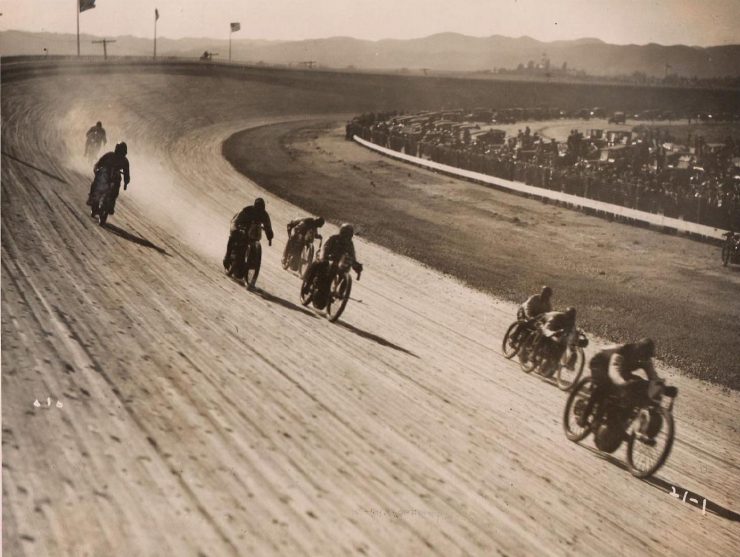 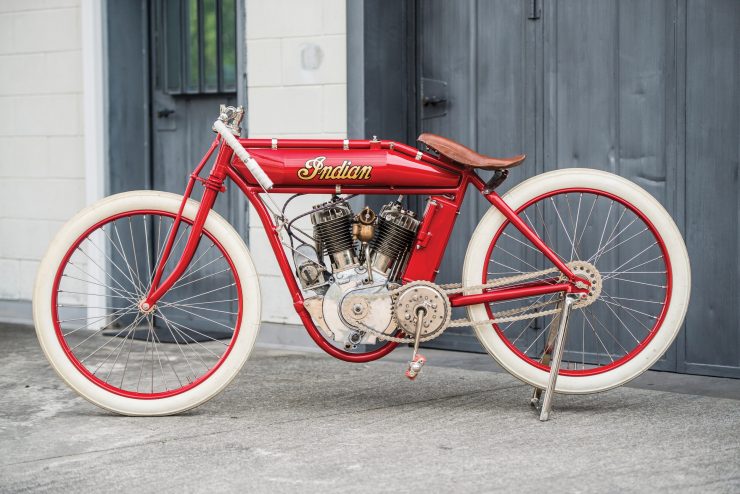 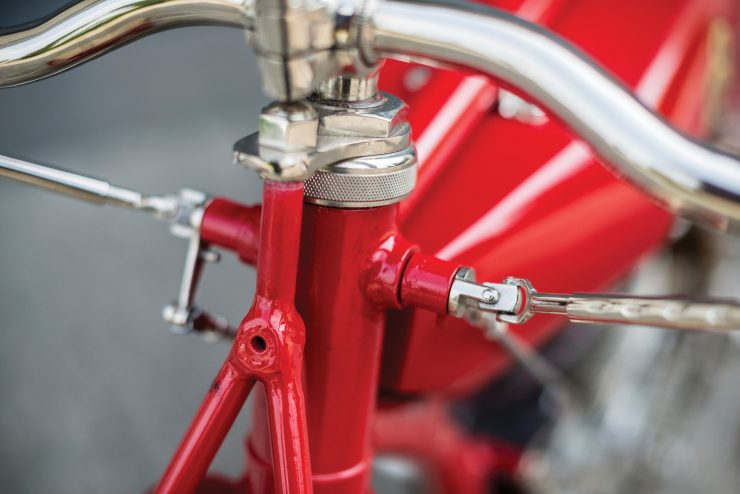 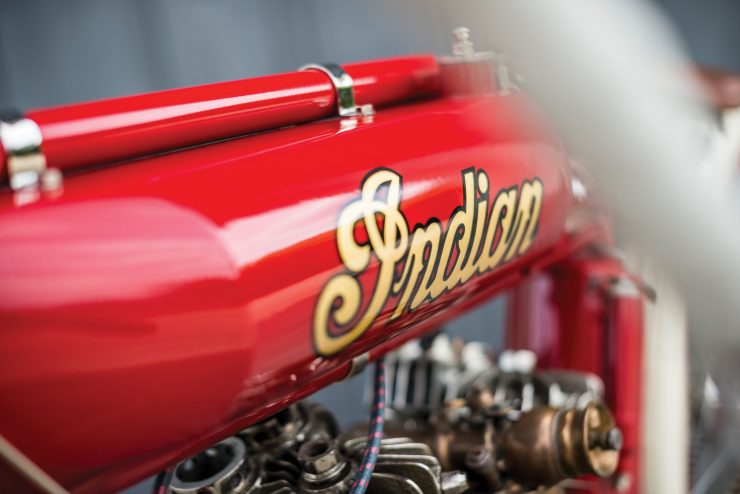 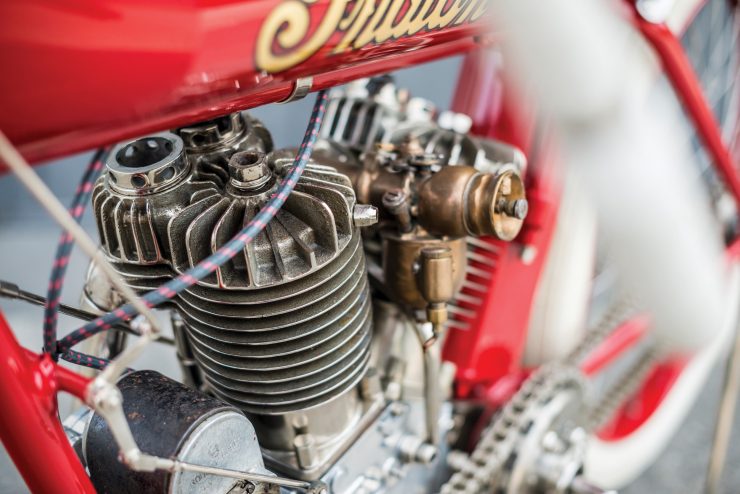 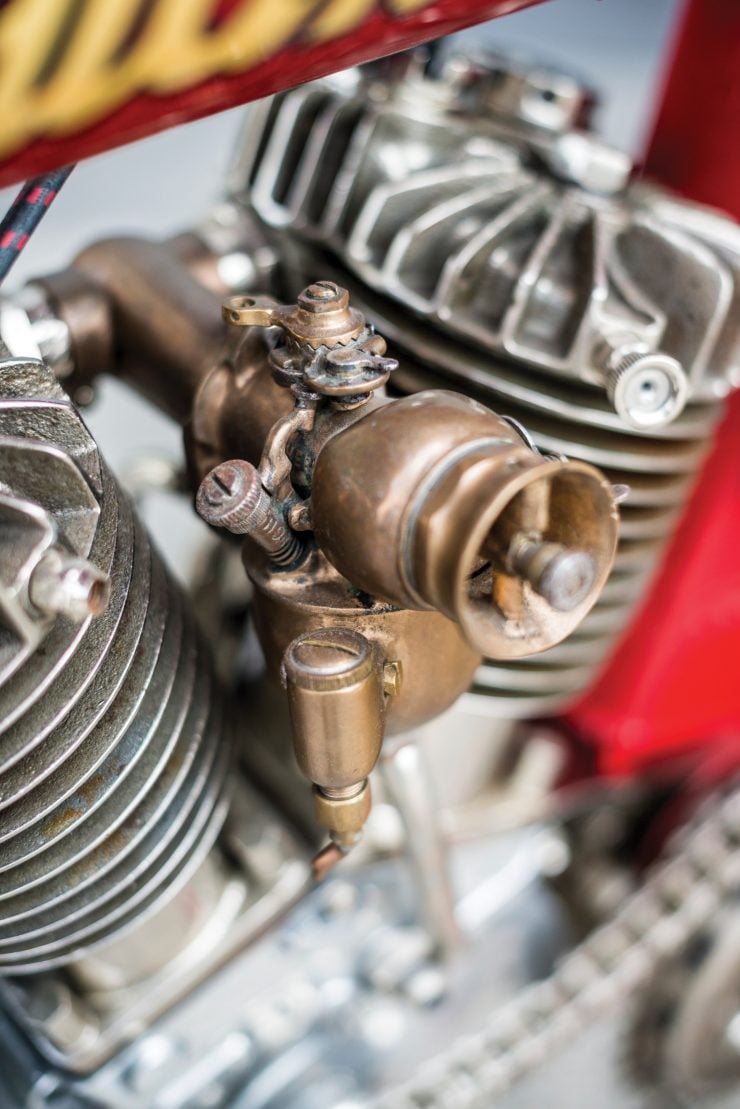 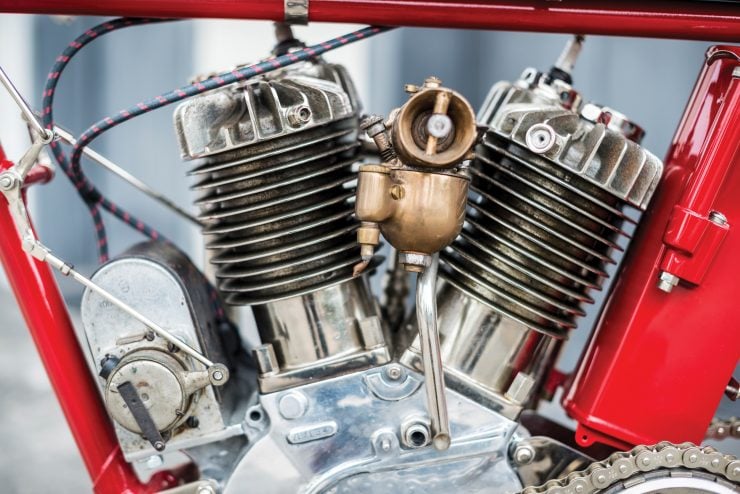 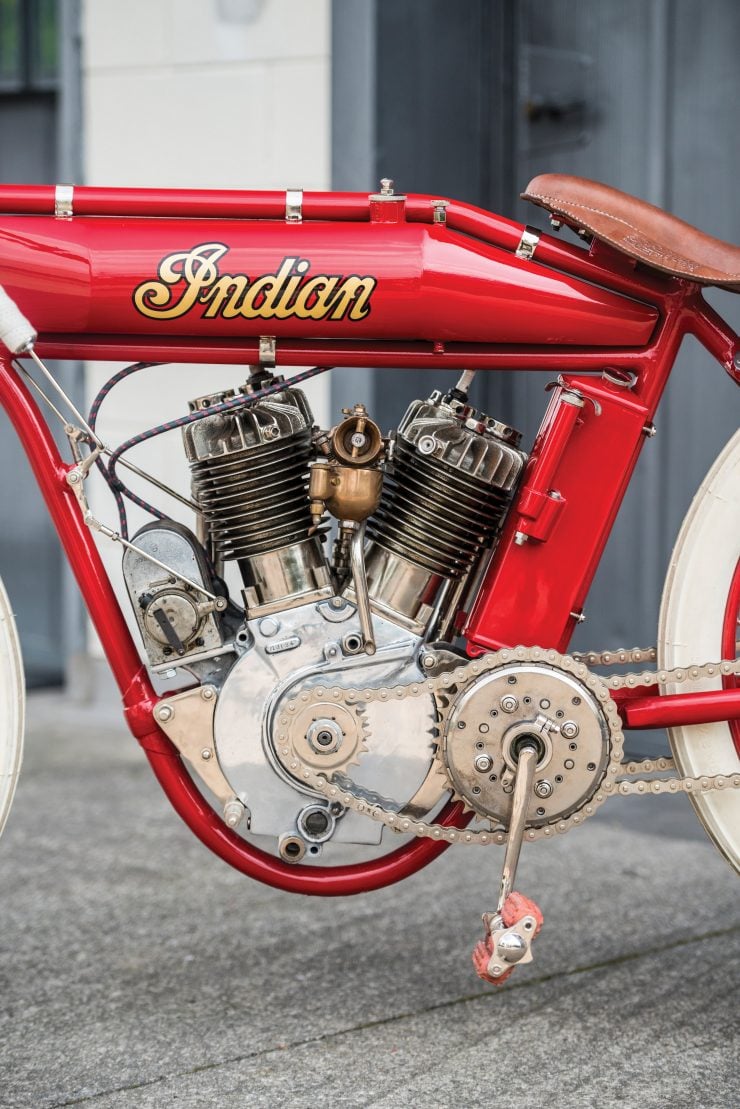 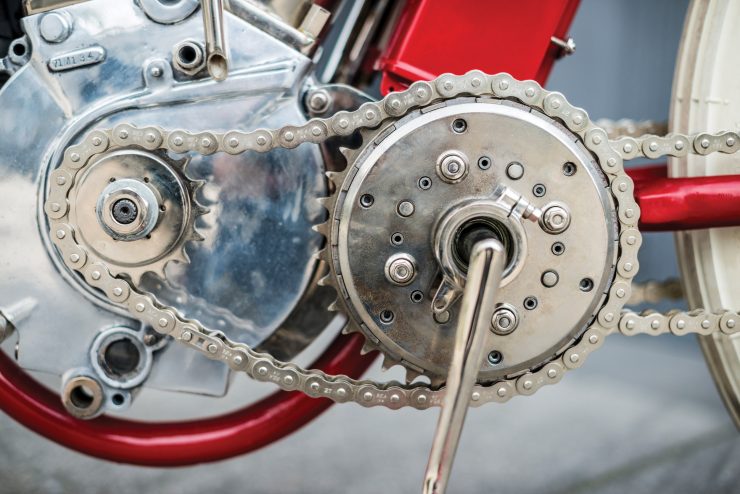 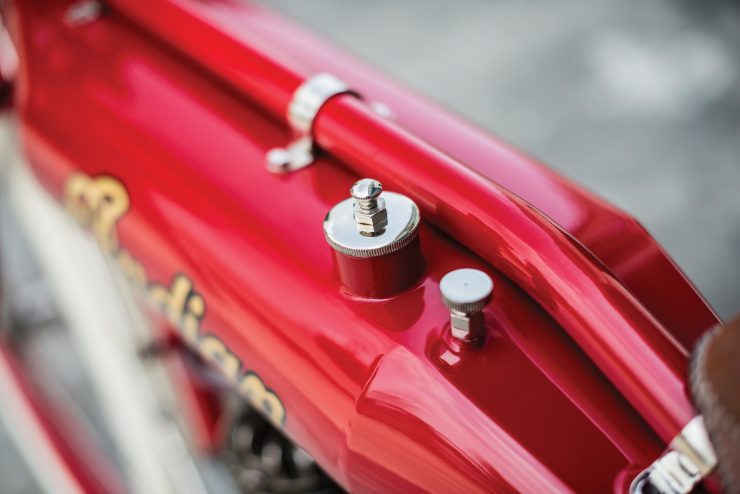 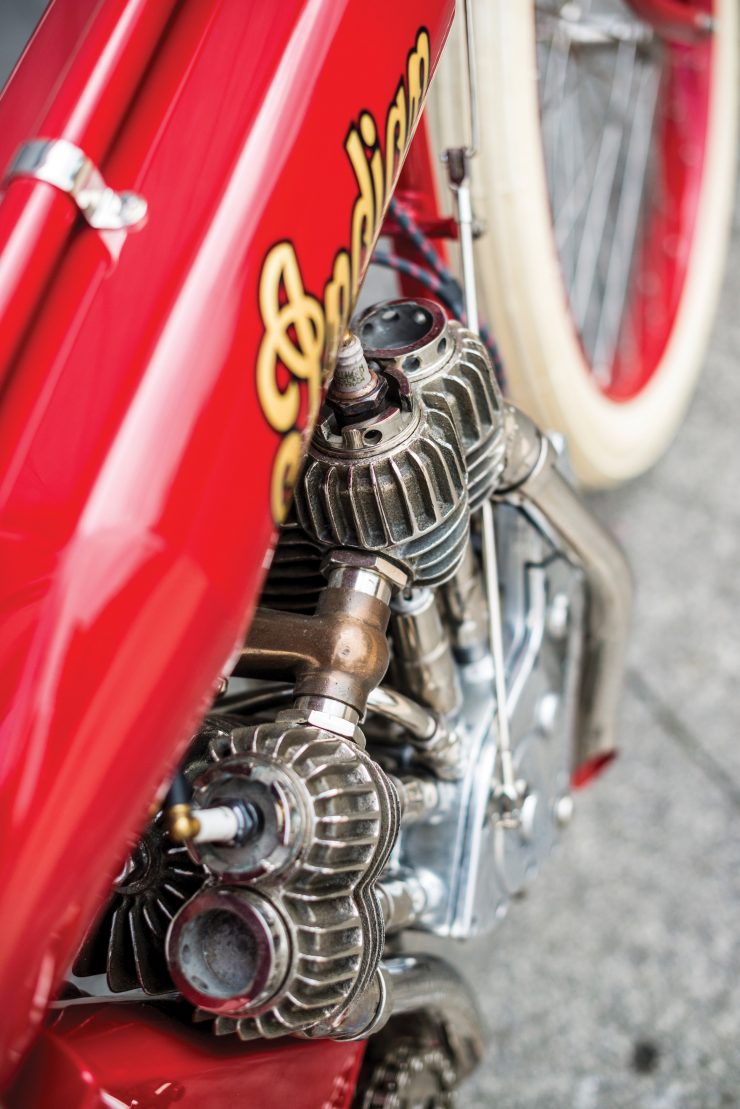 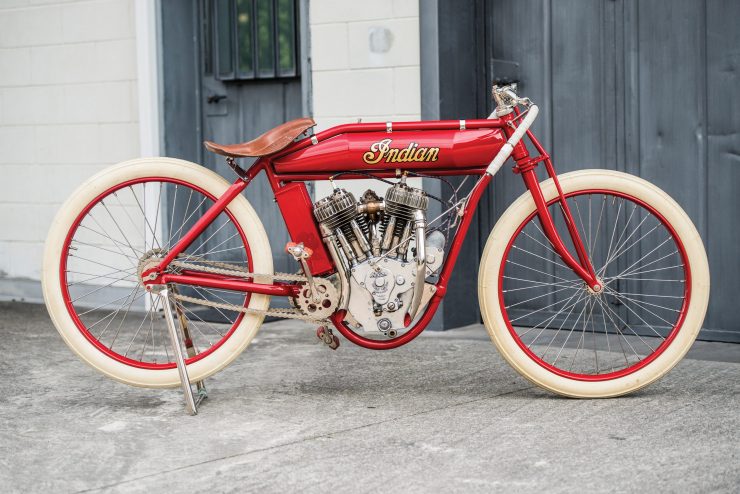 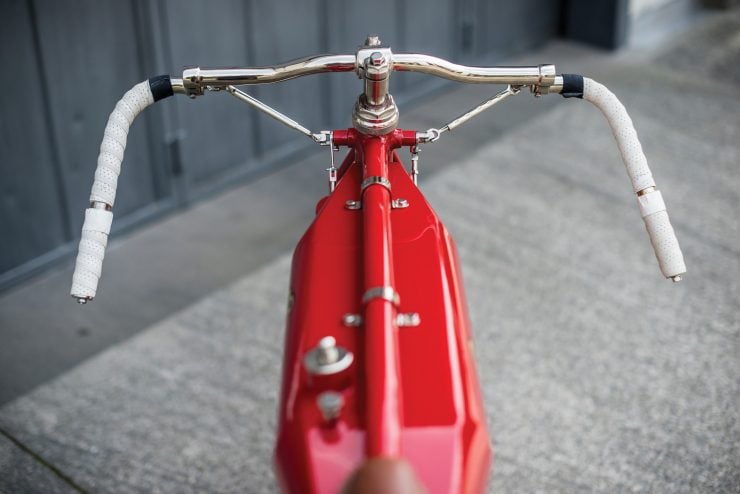 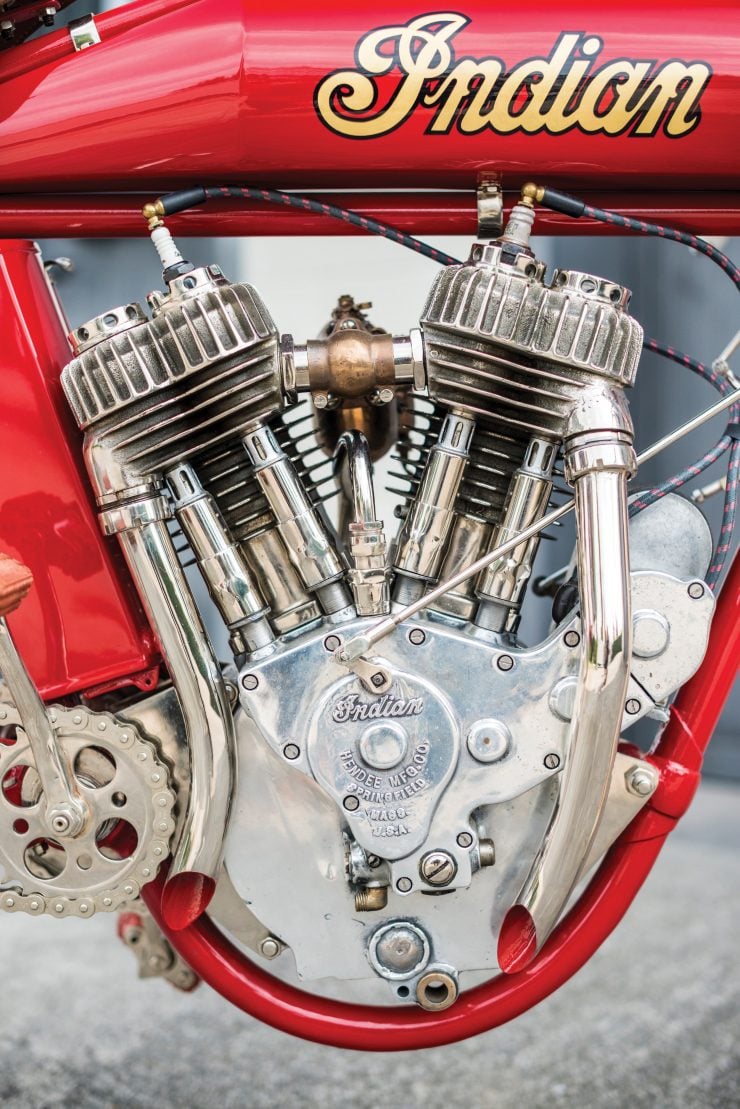 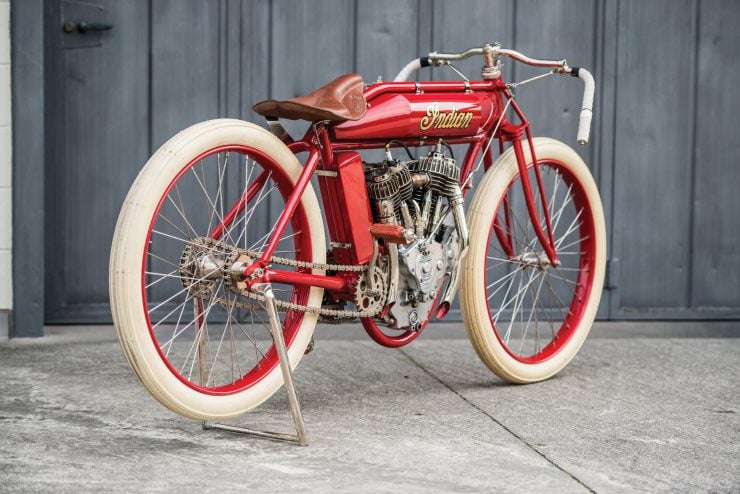 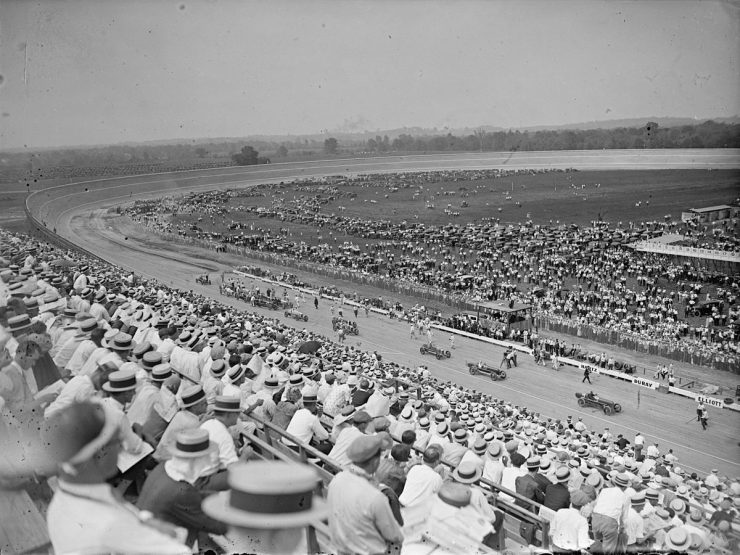 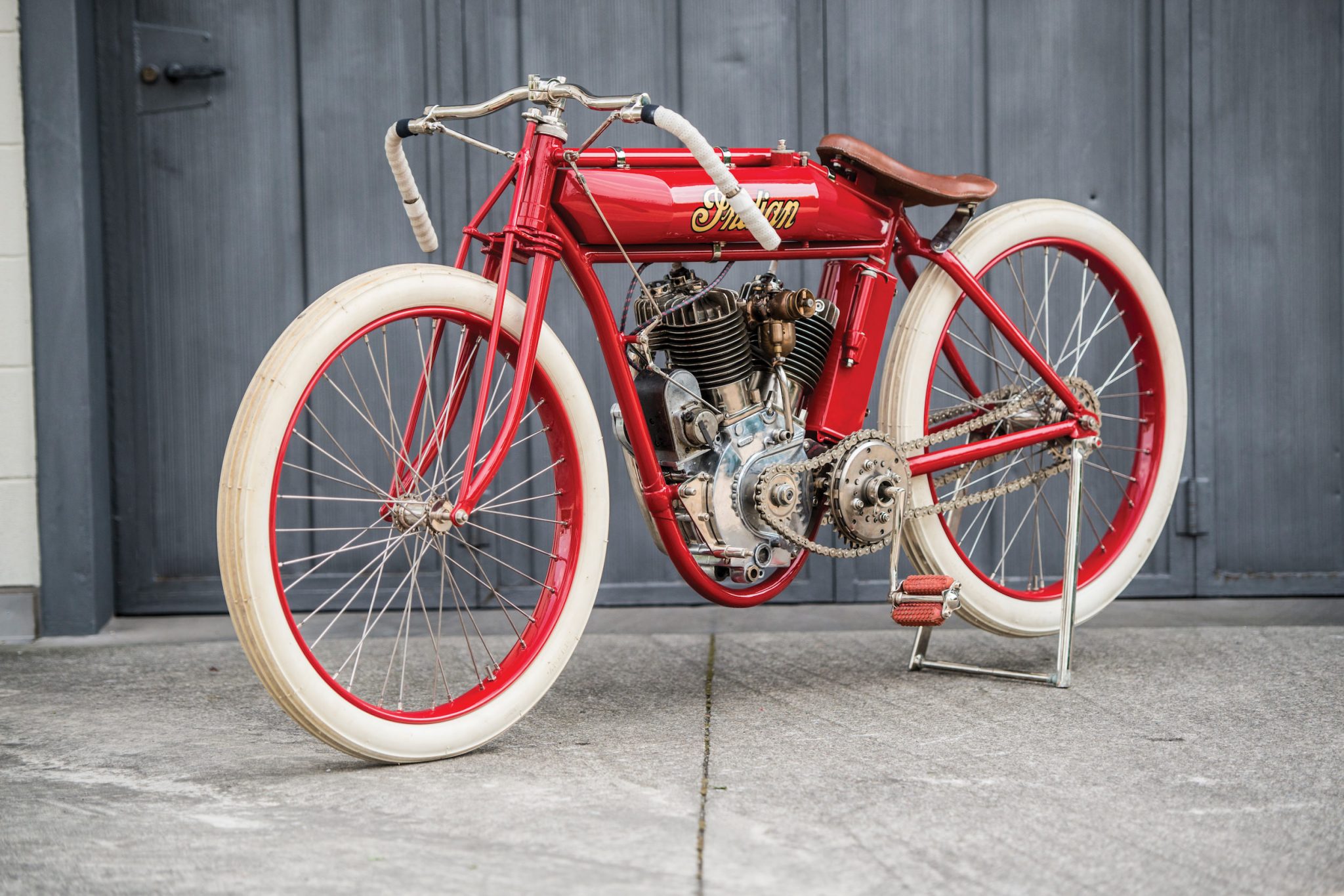 Published by Ben Branch - May 5th 2017
Related Posts
For Sale: The Triumph Scrambler Stunt Motorcycle From James Bond’s “No Time To Die”