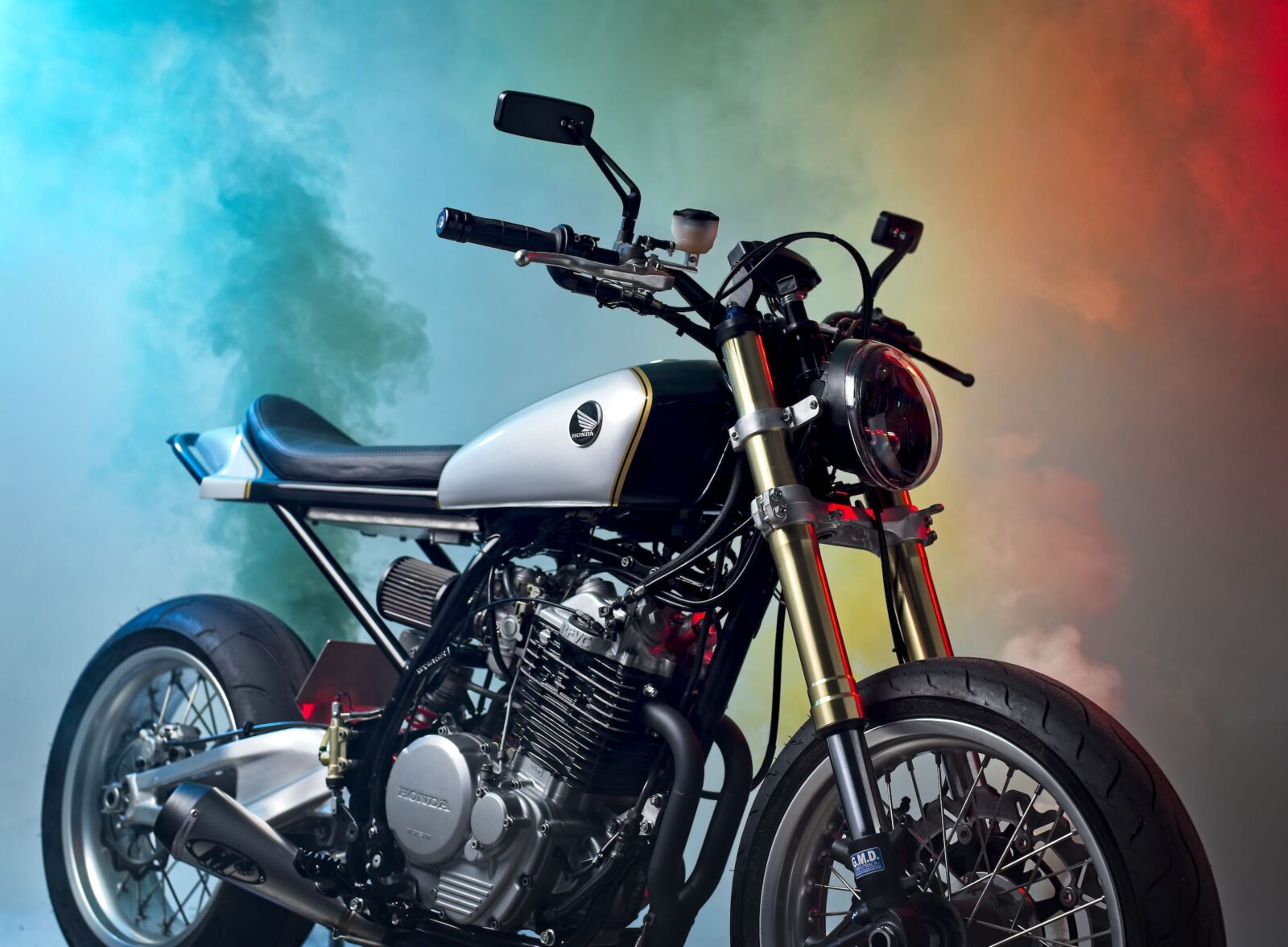 Lloyd Brothers Motorsports have been building some of the quickest flat trackers in the world for over 25 years, but this project wasn’t built for dirt oval competition, it was built as a father son project by company co-founder (and Dad) David Lloyd, and his son James.

The project began with a 1987 Honda XL600R that had been bought brand new by David’s brother Bill Lloyd. Just 2,700 miles had been added to the bike over the intervening decades – so Bill gave it to David’s high school-aged son James as a gift.

With the Lloyd family being who they are, it was unlikely the bike was going to stay stock for very long. It was decided that a full teardown would begin, followed by a rebuild to turn Uncle Bill’s bike into the best Honda XL600R street tracker in the world. 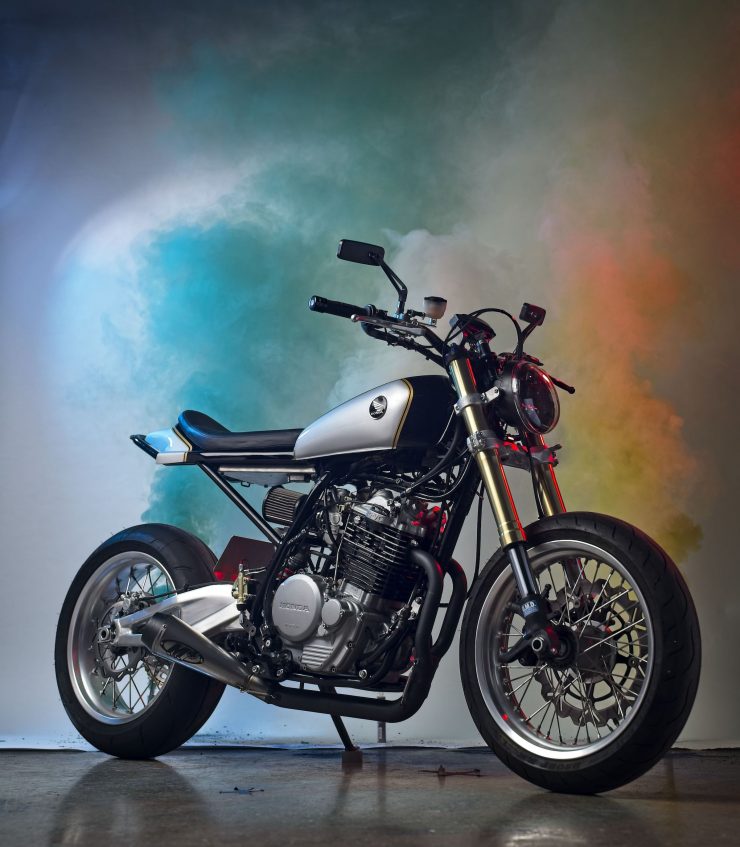 The plan was to get the bike built just in time for the start of James’ senior year of high school, and they only just made it with the help of some good friends, including Bryan Fuller and the Fuller Moto crew, Brian Heidt, Wes Hines and Derek Kines, as well as flat track team member, Rich Lambrects of Desmo Pro.

One of the great benefits of being a racing family is that there are always boxes of unused parts stacked in a shed or garage, and the Lloyd family certainly have their fair share of miscellaneous parts boxes.

Perhaps most importantly they had an unused front wheel and rotor, a front master cylinder, a rear wheel and rotor, and a swing arm from an Aprilia SXV 550 they used to race – all of these would find a home on the Honda replacing the stock parts.

The forks were replaced with much better performing upside-down forks from a Suzuki GSXR, and a Yamaha R6 monoshock was used in the rear, creating a chimera-like motorcycle that includes the best parts from multiple manufacturers. 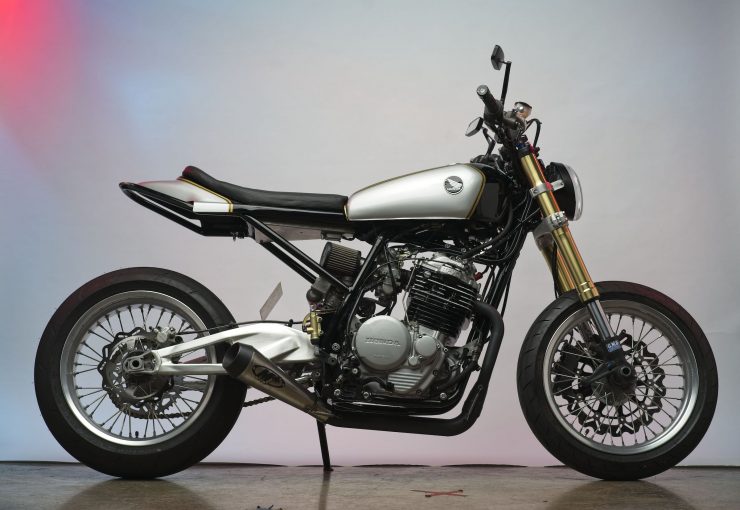 A titanium M4 slip-on muffler replaced the stock unit, it was left over from a rule change applied by the sanctioning body that enforced more stringent sound limits on competitors – so on the Honda single it gives nice bark.

A new subframe was fabricated by Rich Lambrects, it was then fitted with a seat/tail piece supplied by Grand Prix Speed Works, its the same as the one used on the Woods Rotax bikes which is rather fitting, because David used to race them when he was 15.

Paint was done by Reuben Martinez, who also paints the Lloyd Brothers race bikes, the livery has an almost John Player Special feel to it, which will make it popular with any vintage Formula 1 fans.

The second most challenging aspect of the build was re-jetting the carburetors to suit the new air-filters and exhaust. The bike was rolled up onto a dyno but the jetting process was made difficult by the lack of suitable jet sizes – so they drilled a few spares and added leaner needles to get the fueling just right. 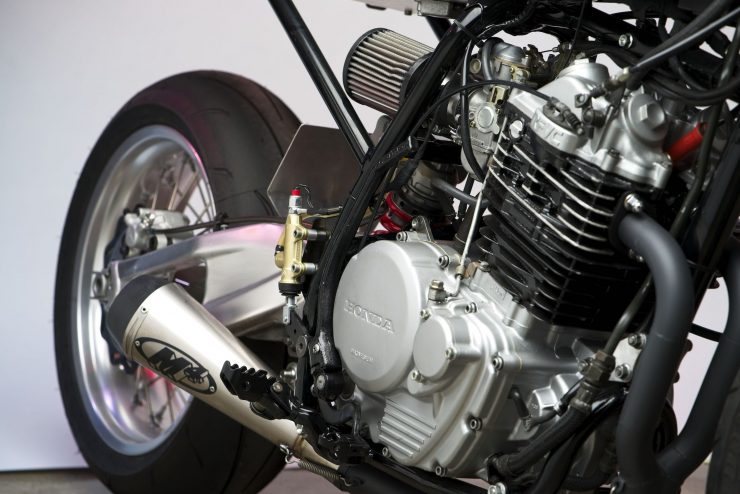 The number one most challenging aspect was something you would probably never guess – it proved almost impossible to remove the red paint from the engine. David remembered the process:

“The most difficult part of the build was getting the red paint off of the engine. I don’t know what Honda used but it was on there! After doing what we could with paint stripper, we ended up building a makeshift soda blaster on a large tarp in our driveway and spent many hours blasting and then collecting the soda from the tarp and re-using it.

Doing this together brought me back to when someone taught me how to drill a hole properly or put all the bolts in loose before you tighten one of them…the basics of working on machines.”

The completed bike is now by far the best motorcycle that belongs to any attendee of James’ high school, and I say that confidently without knowing what anyone else there is riding.

The next civilian Lloyd Brothers build will be a father/daughter project that’s already under way, it’s a 1968 CB350 and we’ll be featuring it here when it’s ready for roll out. 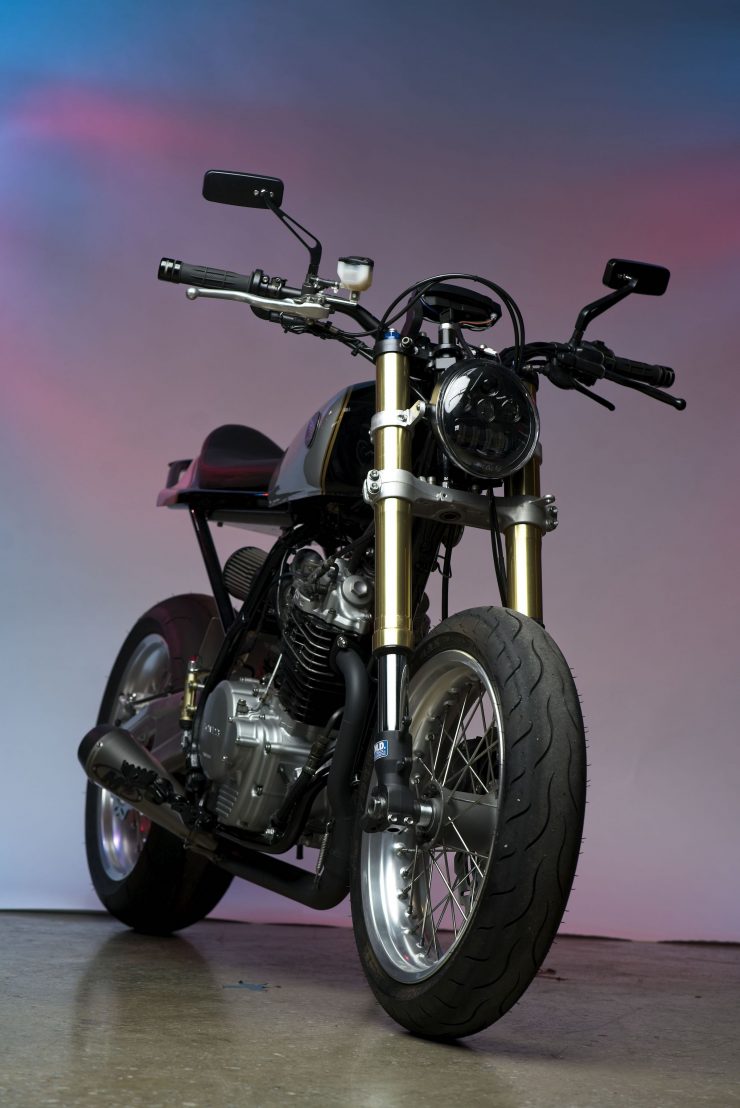 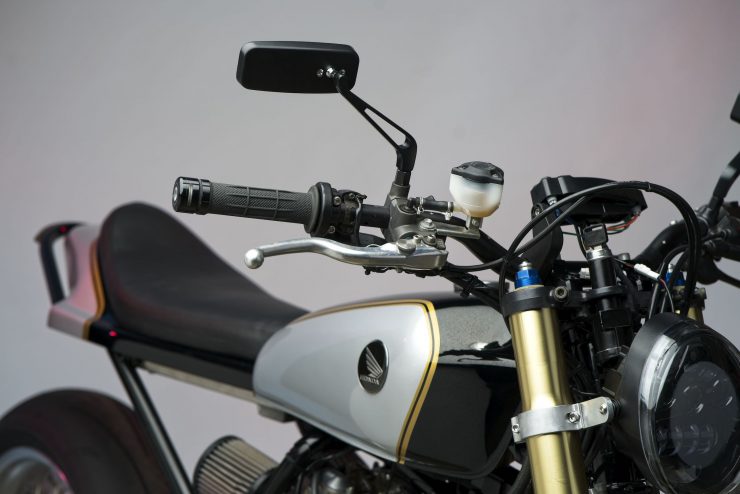 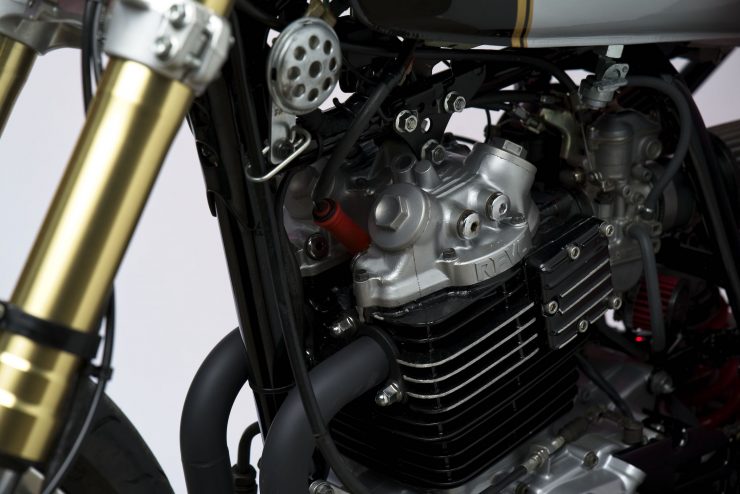 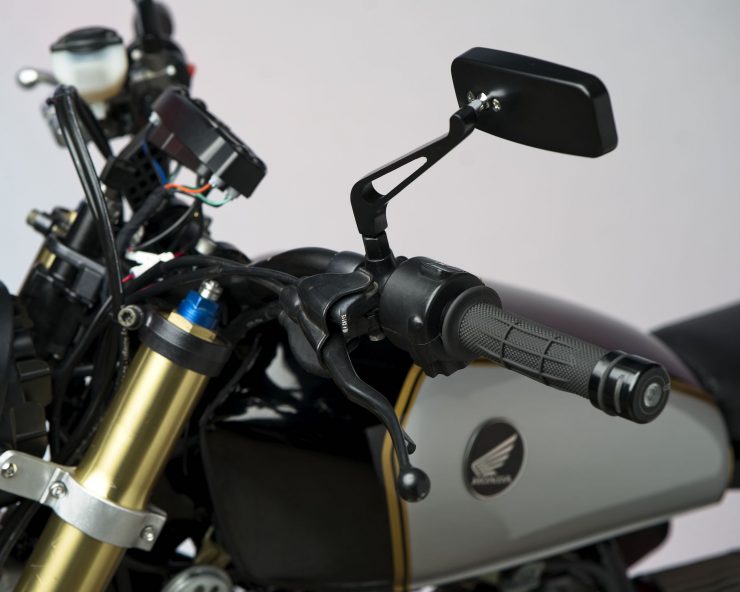 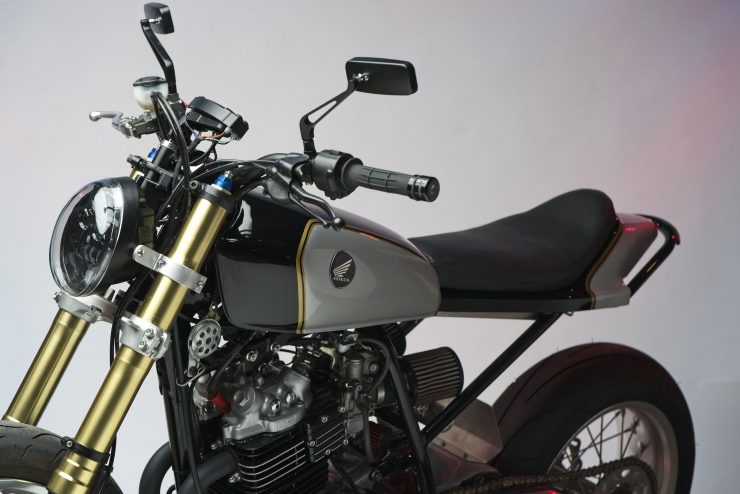 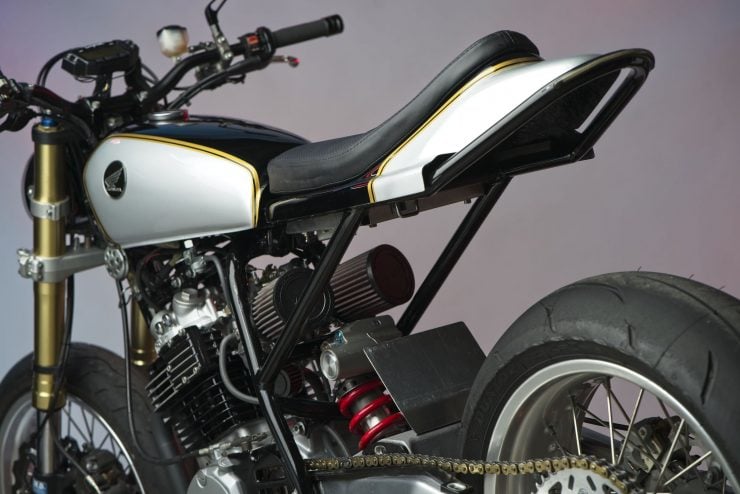 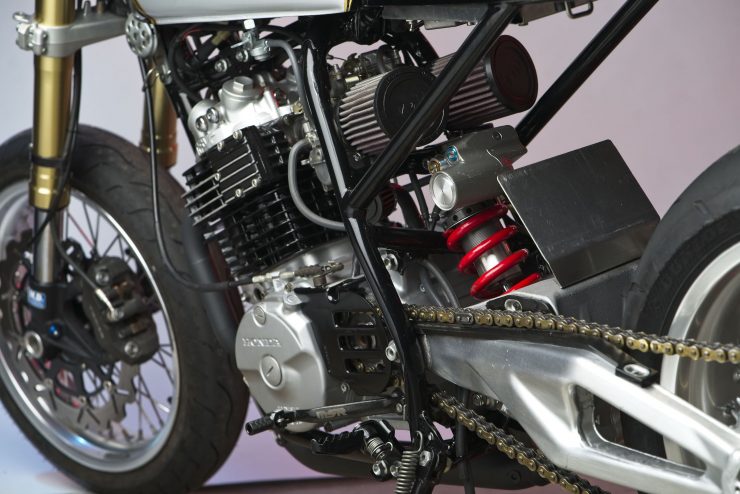 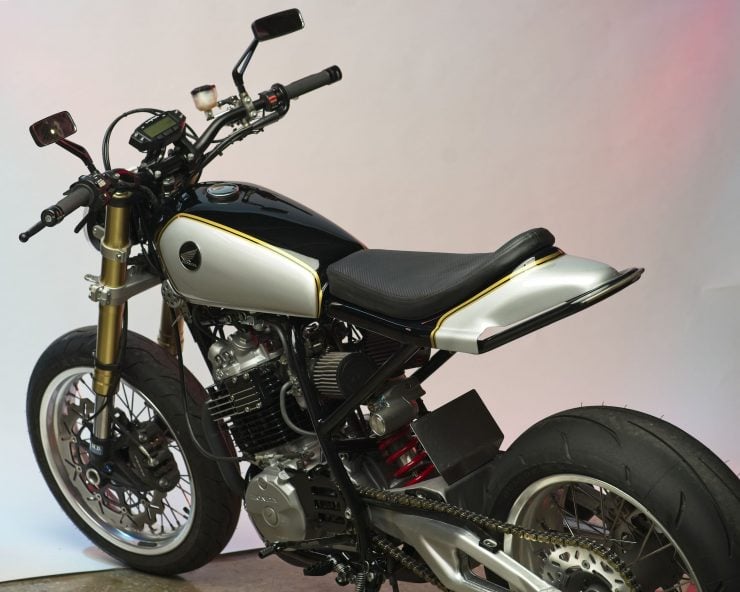 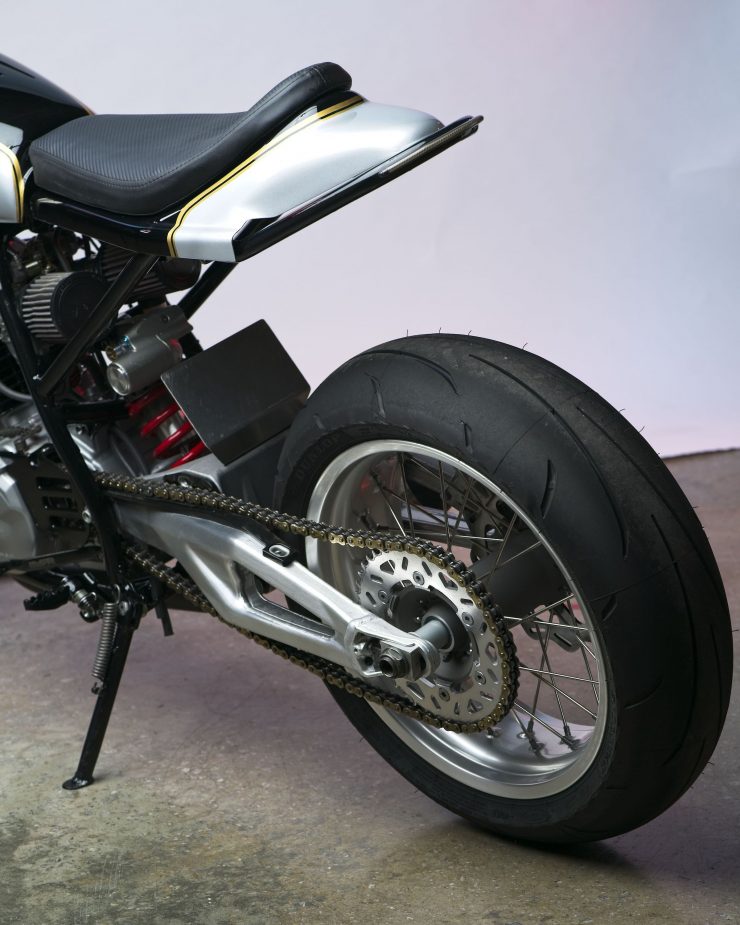 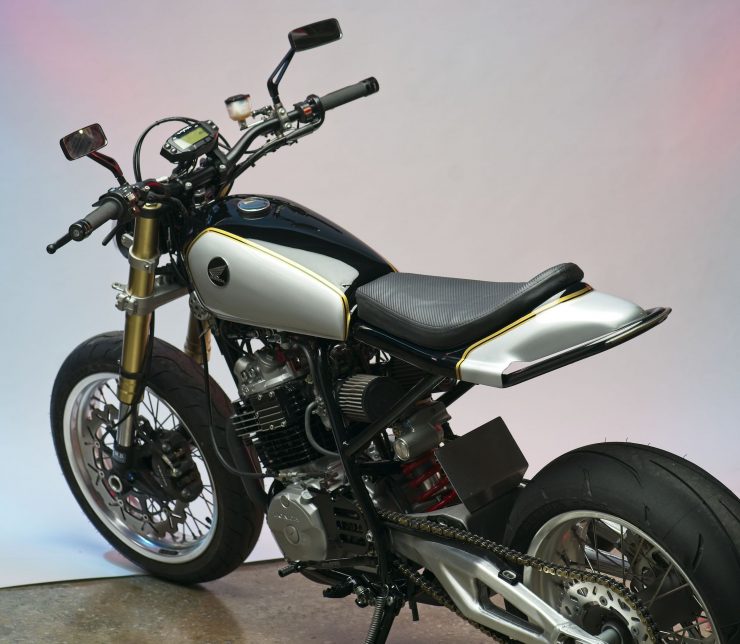 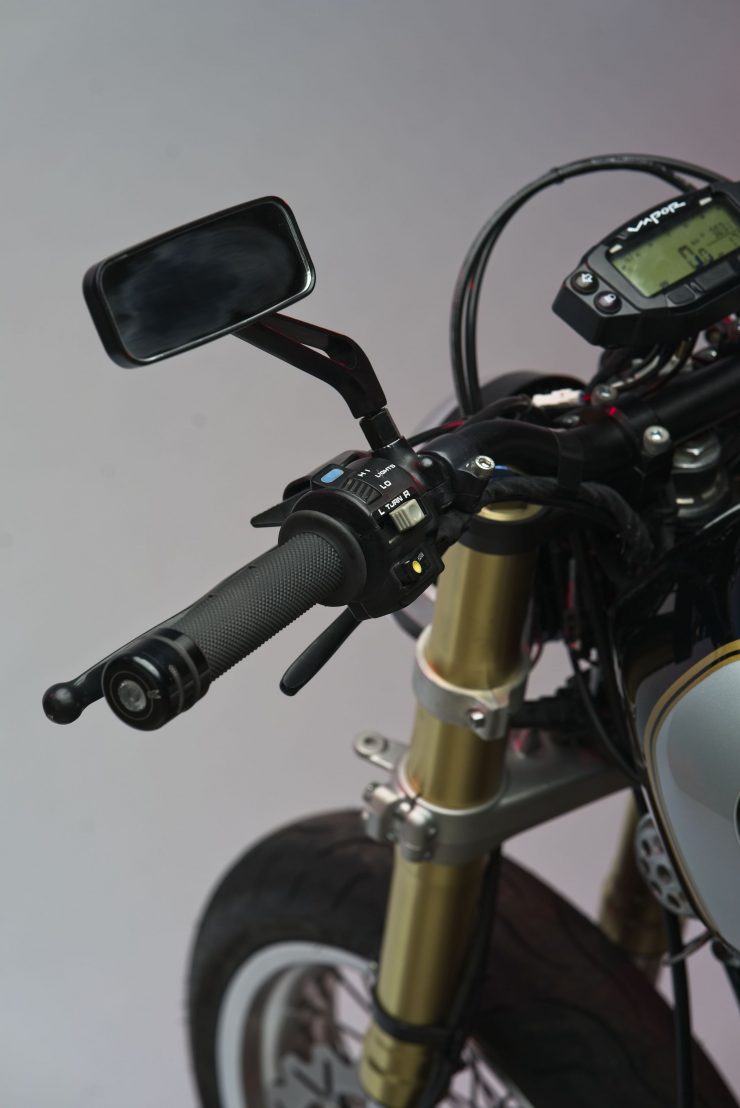 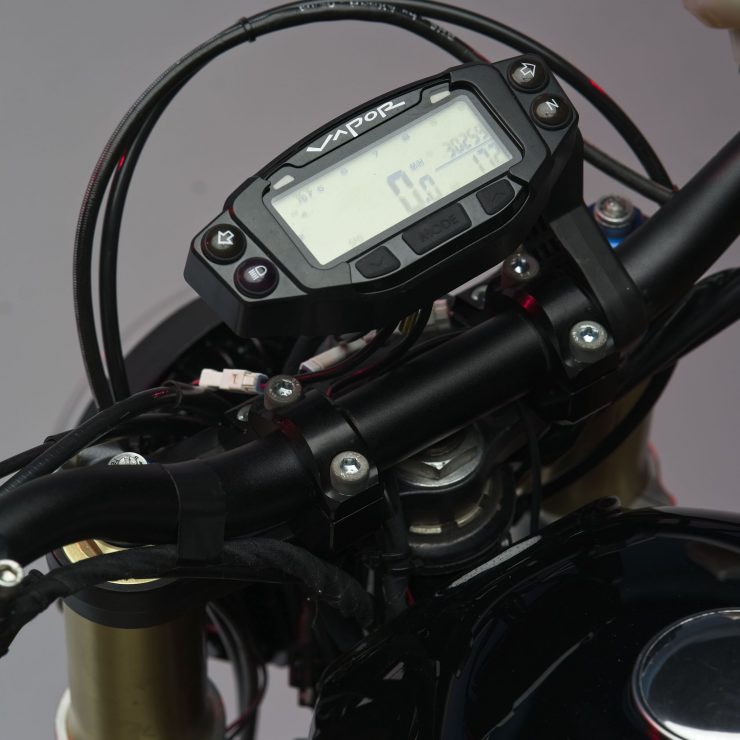 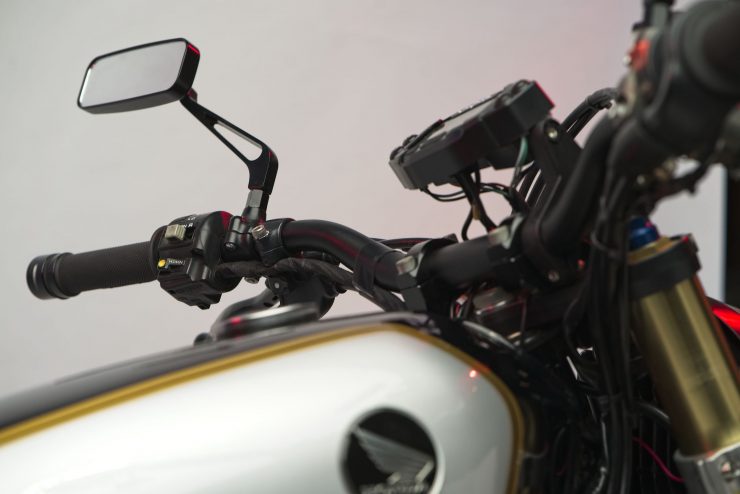 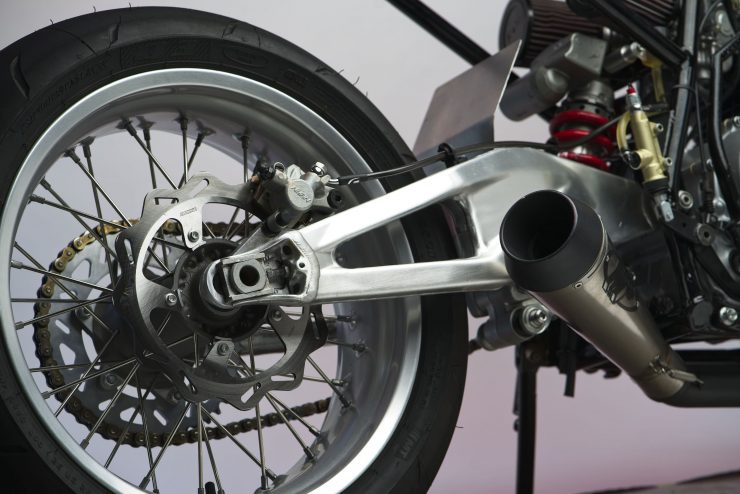 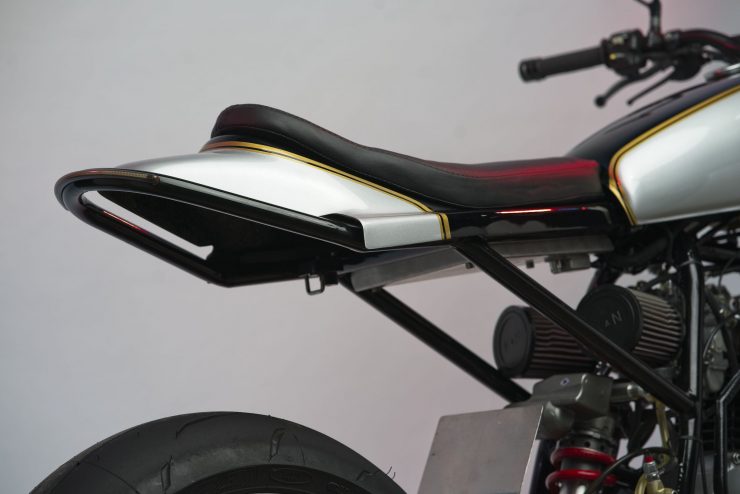 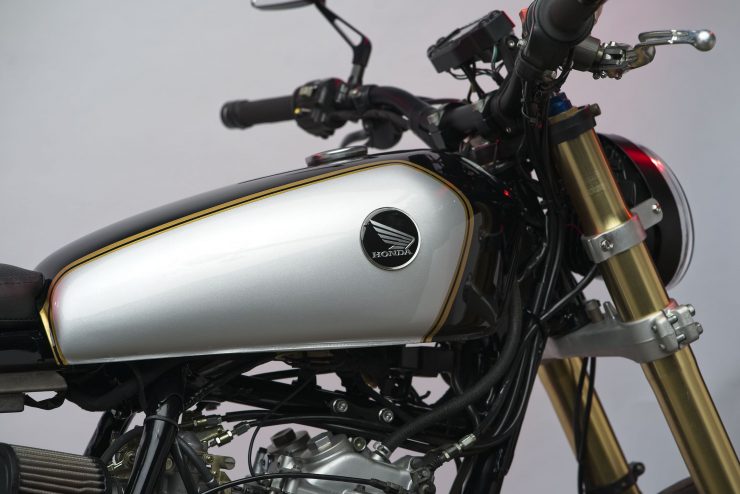