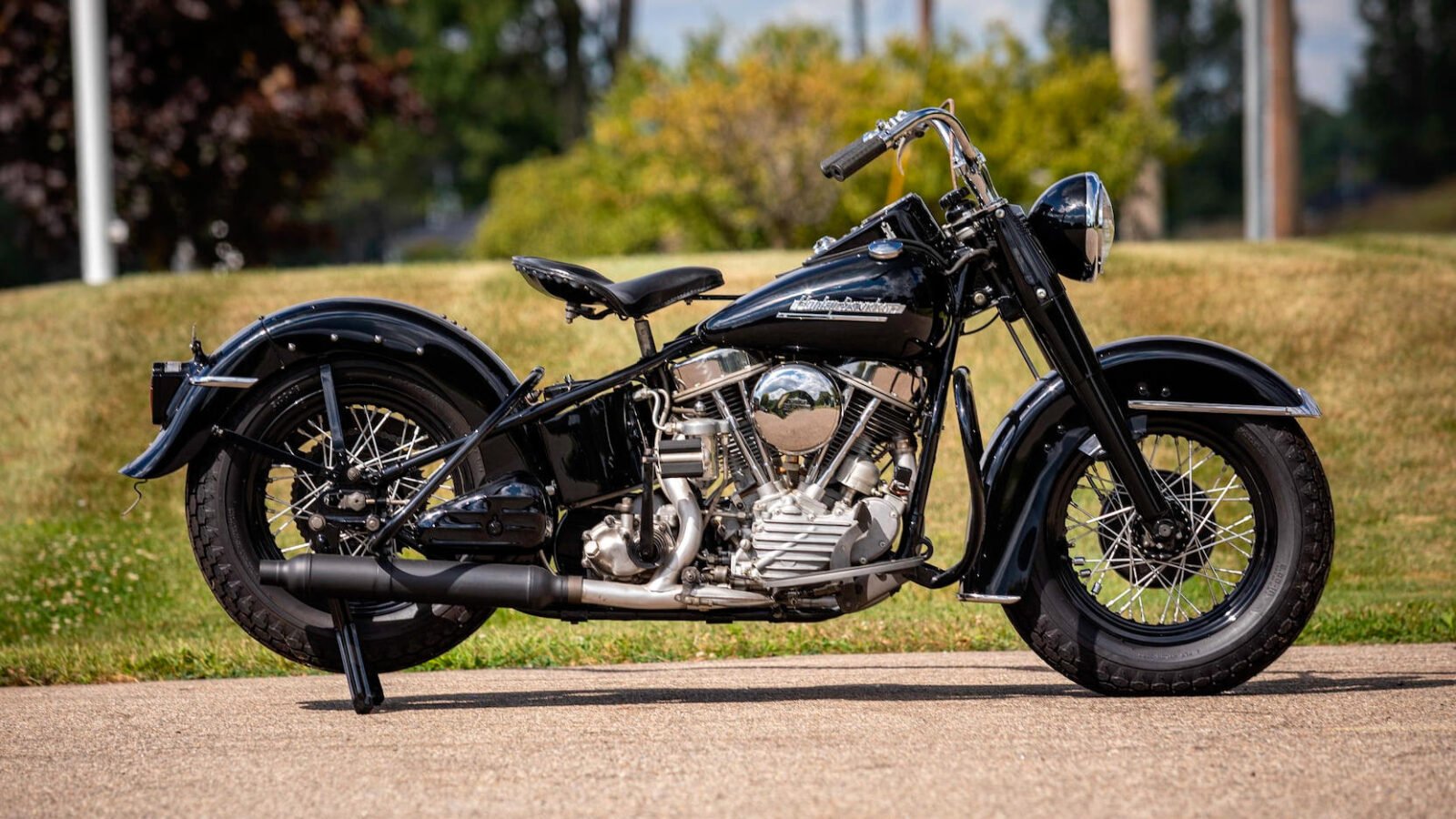 The Harley-Davidson FL Panhead was the top of the line Harley back when it was new, no other road-going model from the Milwaukee-based manufacturer could match it for horsepower, torque, or cubic inches.

Each of Harley-Davidson’s V-twin engines has been given a nickname ever since the company was founded in 1903 – the Panhead was so named because its heads looked like upturned saucepans.

Hydra-Glide – The First Of The Harley Glides

When Harley-Davidson switched from springer forks to telescopic hydraulic forks on the FL Panhead in 1949 the marketing department capitalized on it by naming the model the “Hydra-Glide.” 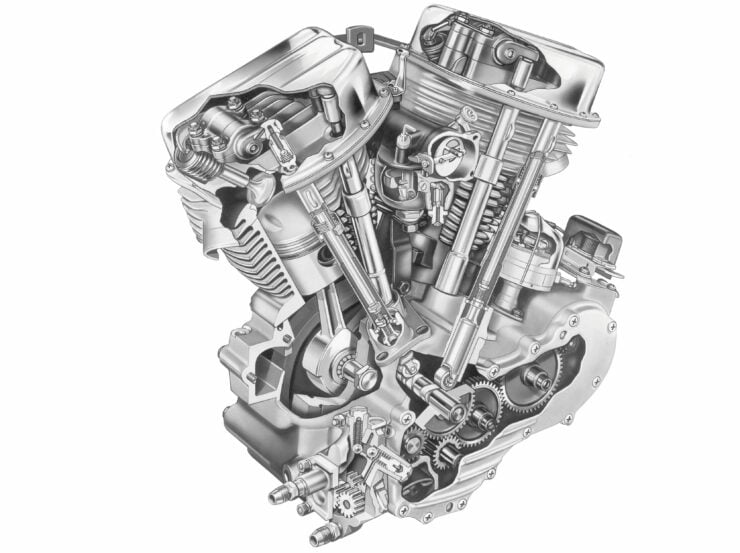 This is a cutaway illustration of the Harley-Davidson Panhead engine. Under the “Pan” valve covers it has two rocker arm and pushrod actuated valves per cylinder.

This would be the first of the “Glide” models offered by the company, the following two would be the “Duo-Glide” in 1958 with a rear swing arm and dual hydraulic shock absorbers, followed by the “Electra-Glide” in 1965 – so named because of its electric starter.

The Electra-Glide is the best known as it’s been in production the longest, and it remains in production to the current day, in considerably updated form of course.

The Harley-Davidson FL Panhead was released in 1948 as the new top of the line model, sitting just above the EL Panhead in the Harley model family. 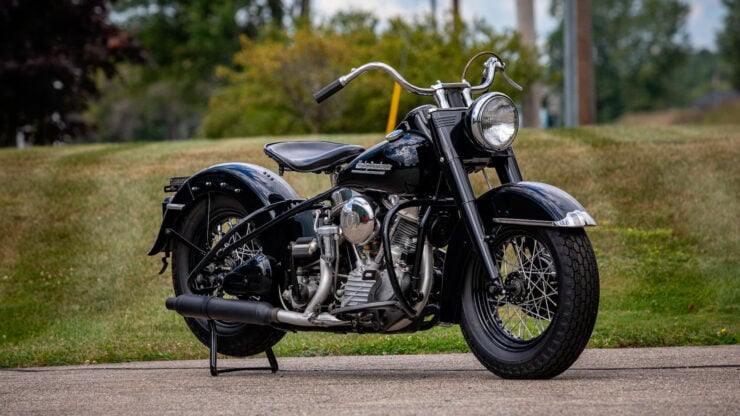 The styling of these early Hydra-Glides is what many people picture in their heads when they hear the name Harley-Davidson.”

The Panhead would become one of the Milwaukee motorcycle manufacturer’s most famous engines, helped along by the fact that it would power both of the choppers in the iconic 1969 film Easy Rider, starring Peter Fonda, Dennis Hopper, and Jack Nicholson.

Fonda and Hopper’s motorcycles were both powered by the FL Panhead, Fonda’s bike was named “Captain America” and Hopper’s was known as “Billy Bike.”

Although Harley-Davidson would stop making the Panhead in the 1960s when it was replaced by the “Shovelhead,” it wasn’t the end of the line for the engine.

Private companies have developed their own improved versions of the Panhead and it’s possible to buy one today brand new, in a larger displacement than original, and many of the engine’s foibles cured for good.

The FL Panhead would be the last “big framed” Harley with no rear suspension, known as a hardtail these bikes can be traced back to the very earliest days of the company. 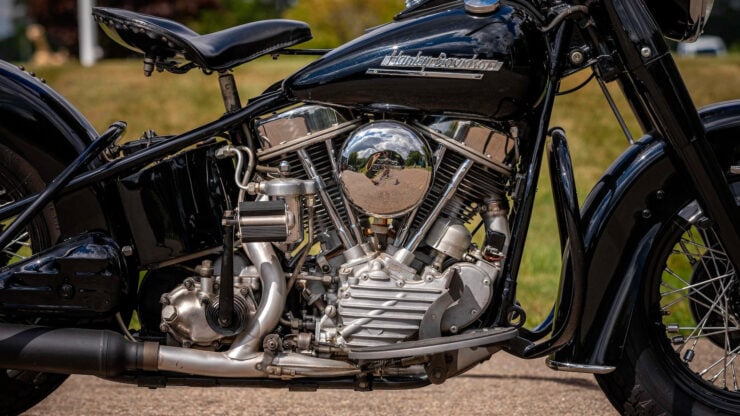 The 45º V-twin Panhead engine has been so enduringly popular that it’s still possible to buy them today, made by third-party manufacturers.

Today the original FLs are highly sought after not just in the United States but across the Atlantic in Europe and as far away as Japan and Australia.

The Harley-Davidson FL Panhead Hydra-Glide you see here is a 1952 model that has been meticulously restored by a marque expert.

Unusually the bike is finished in a black-on-black color scheme, and it has a single sprung saddle with no rear seat.

The bike is fitted with front and rear crash bars, a tombstone taillight, and a toolbox. It’s due to be offered by Mecum at the Las Vegas Motorcycle Auction in January and it’s being offered with no reserve. 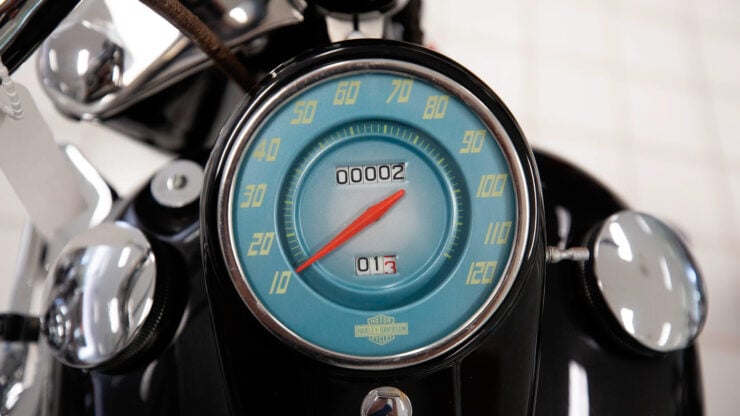 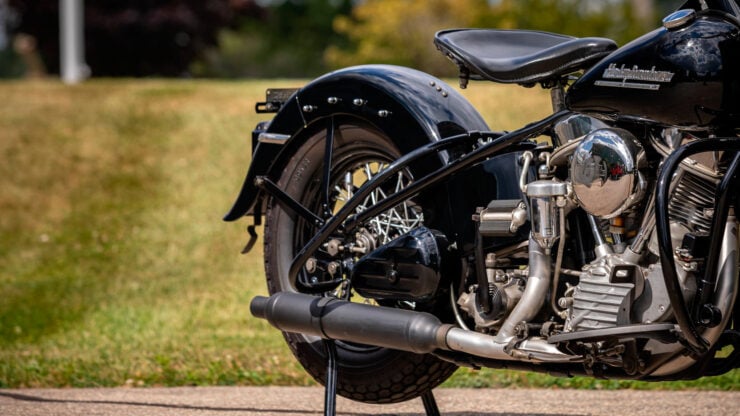 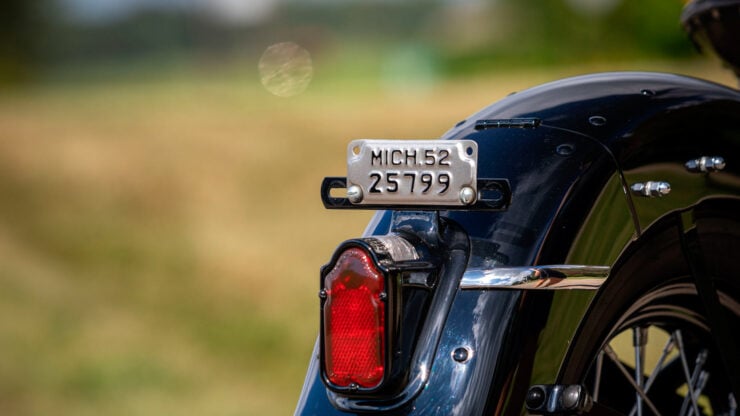 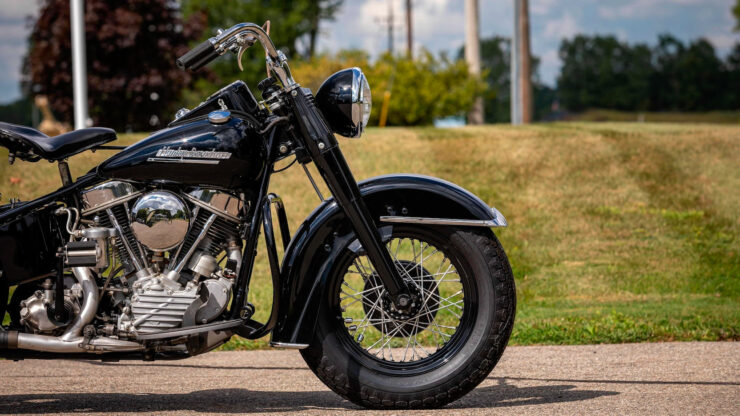 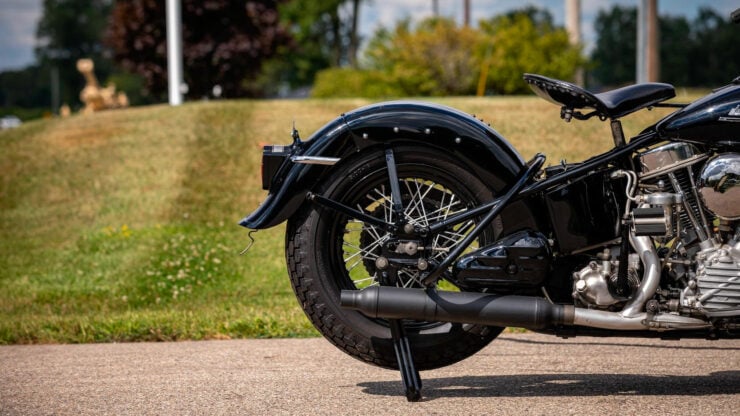 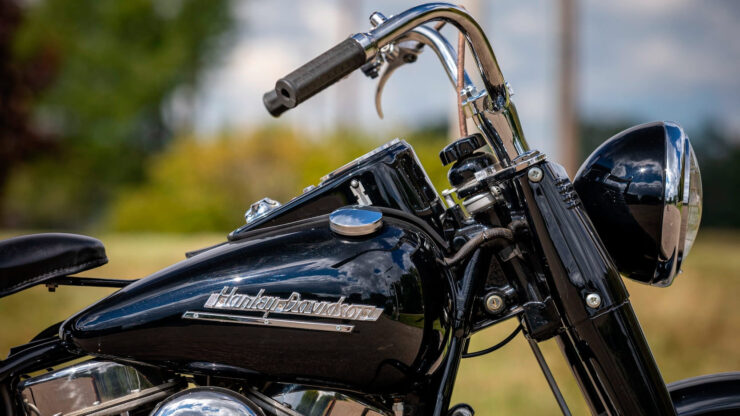 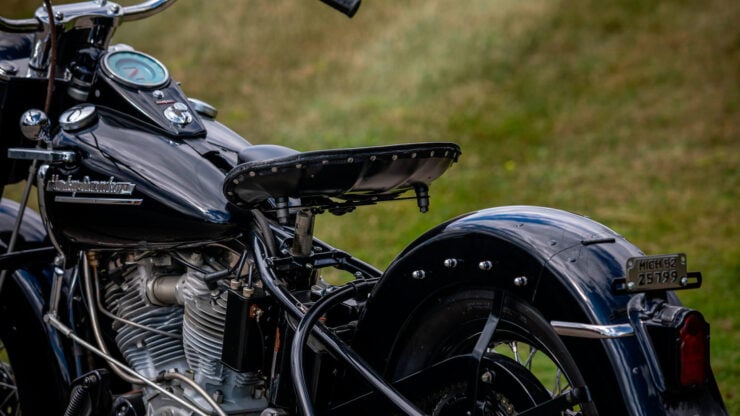 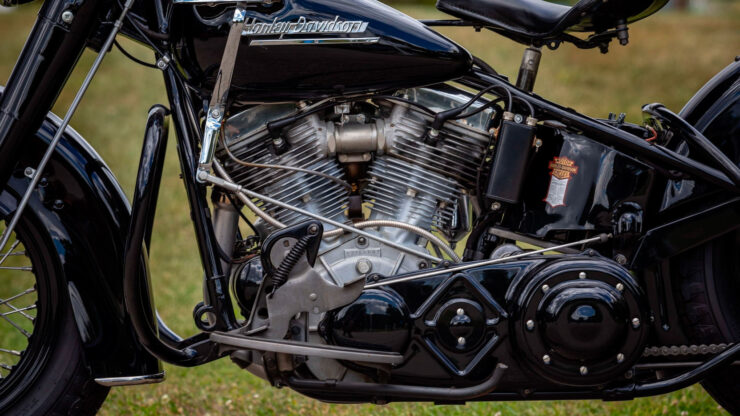 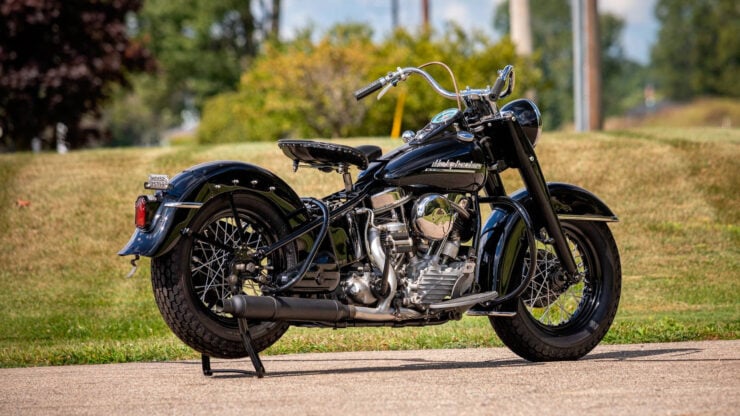 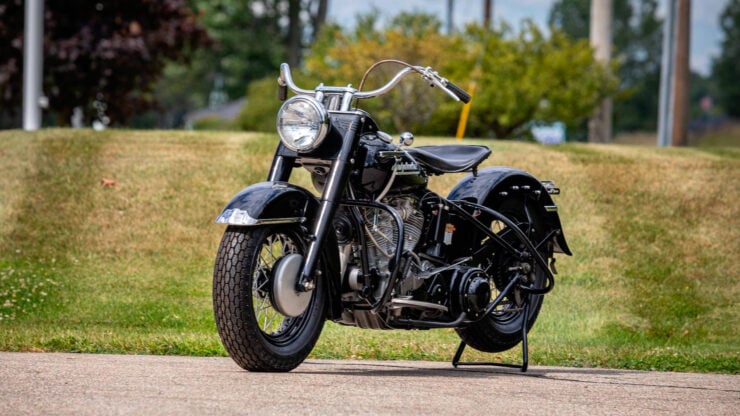 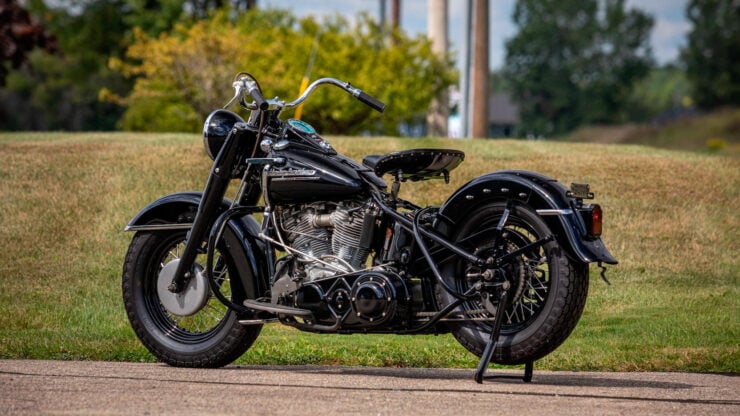