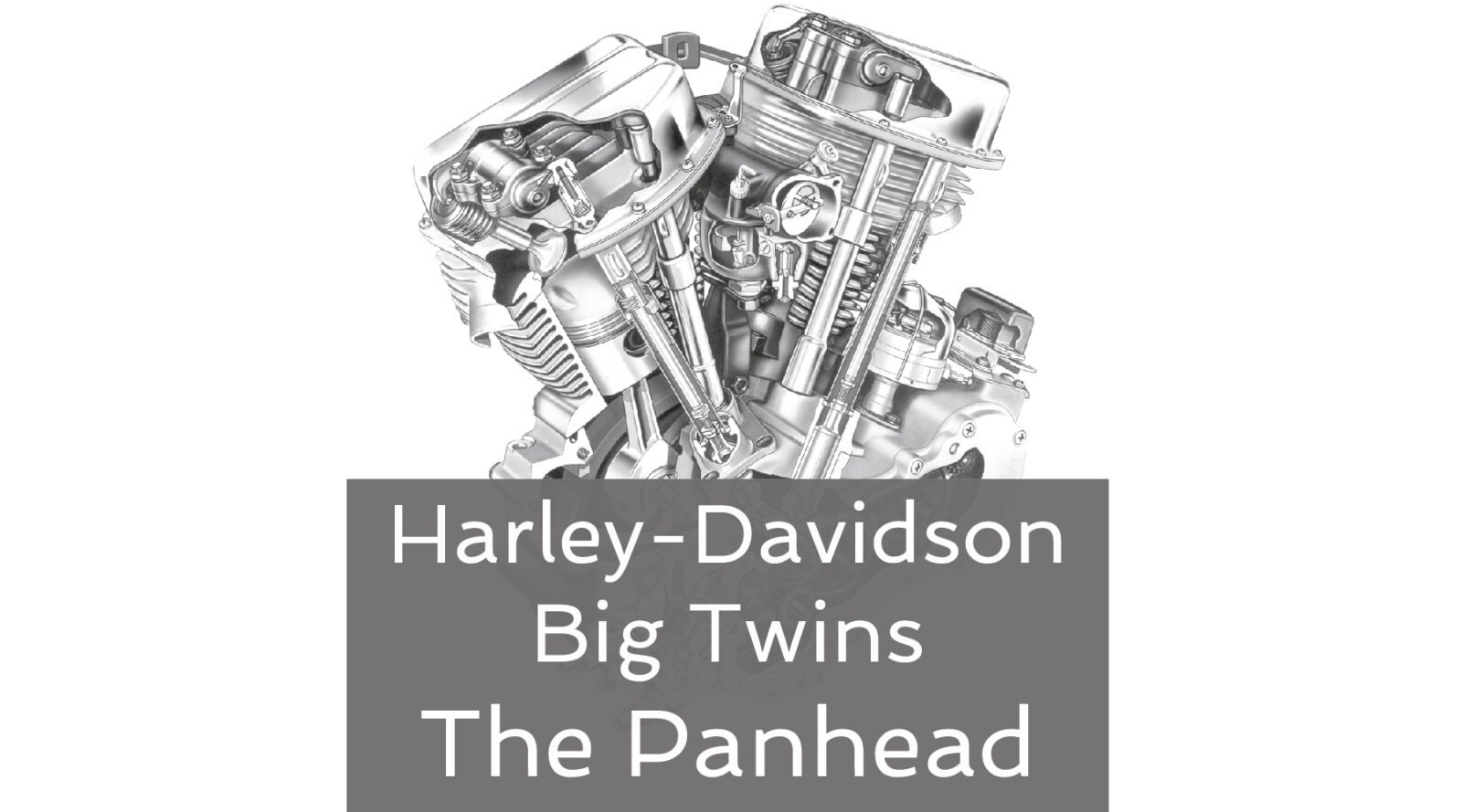 The Harley-Davidson Panhead powered bikes (along with the Knuckleheads) are the motorcycles of the ’60s custom culture phenomenon.

The 1969 movie “Easy Rider” was arguably the film that brought the Chopper motorcycle from being an obscure cult bike to being a popular custom bike and both the “Captain America” and the “Billy Bike” of the movie were custom built choppers built on hard-tail Harley-Davidson Panheads.

The Harley-Davidson Panhead was a post WWII design, and so it is very much the bike that was an integral part of the motorcycle cultures of the ’50s, ’60s and ’70s. Introduced in 1947 this was Harley-Davidson’s second move into overhead valve technology in a production motorcycle. The previous Flathead side-valve engine had been intentionally built to be agricultural/military grade technology.

The Knucklehead had been Harley-Davidson’s very first venture into overhead valve technology for a production motorcycle and although Harley-Davidson were able to partially de-bug the design they were not able to refine it to their satisfaction. However, by the end of the Second World War Harley-Davidson had a new and wonderful set of advantages that were denied them prior to the war.

Not much of anything accelerates technological development like a major war and World War II had resulted in a quantum leap in design, metallurgy, and technical understanding of internal combustion engines. Harley-Davidson saw the opportunity to re-design the Knucklehead engine to make it what they had really wanted to build before the war but couldn’t.

The Panhead engine would use war-plane engine technology to create a decent overhead valve engine for a motorcycle, albeit one that would still have a bit of a tendency to drip a small amount of oil on the garage or apartment floor.

It was in the third quarter of 1947 that Harley-Davidson introduced its new Panhead engine and despite the fact that the leaves were falling from the trees and a chill was in the air this was not to be a winter of discontent for Harley-Davidson motorcycle enthusiasts.

The new Harley-Davidson engine was based on the proven bottom end of its predecessor, the Knucklehead, but the cylinder head and top end were new and different. The bikes appeared on dealership showroom floors in 1948 and as America warmed up in the springtime buyers also warmed to the new bikes. The Knucklehead engine had exhibited problems with heat in its top end but the new design was built to ensure those problems were in the past.

The Panhead engine was offered in two capacities, a 61 cu. in. and a 74 cu. in. which generated a nicely adequate 55hp. The top end overheating problems were addressed by a number of war-bird technological strategies. The cylinder heads were made from the same high temperature alloy as used on the Boeing B17 Flying Fortress bomber, the Republic P-47 Thunderbolt and the Grumman F4F Wildcat.

This was a much more sophisticated engine than the Knucklehead although it was not much more complex, it simply used more advanced metallurgy, better fins to dissipate heat and hydraulic lifters.

The covers over the overhead valves were simplified with the intention of solving the oil leakage problems that had plagued the Knucklehead. This provided a significant improvement but it was still not 100%. Experimentation with using a felt cover over the top of the valve mechanism was tried both to keep the oil contained and to muffle the noise of the valves and hydraulic adjusters, it worked and was adopted. 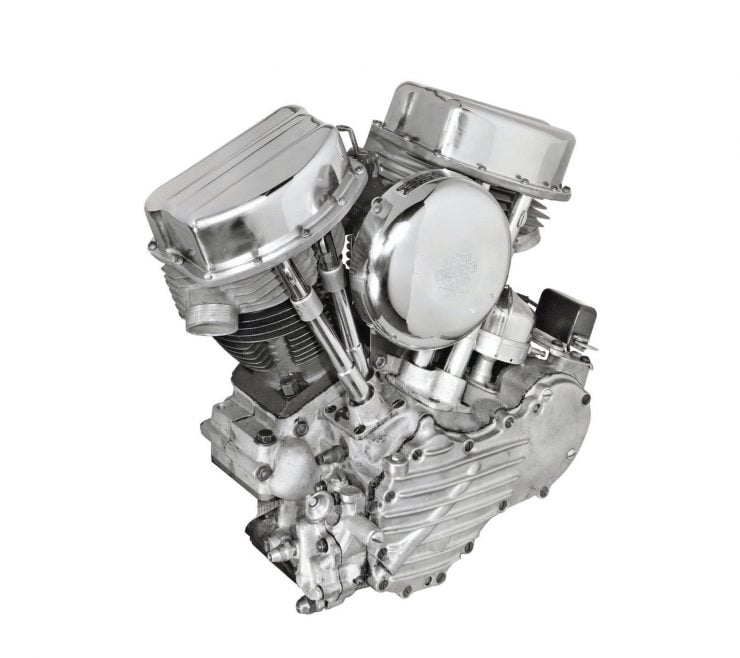 As the years went by the design of the Panhead engine was progressively improved. In the first year of production the oil pump was enlarged to improve oil pressure and flow, in 1951 the pistons began being fitted with chrome piston rings which was another technology borrowed from the war-birds.

That same year the rocker assemblies were changed to a new one piece design. The old hollow design with end caps had sometimes exhibited oil pressure failure if the end caps on these tubular rockers came adrift. By 1953 problems with the rockers, hydraulic adjusters and valve seating had been identified resulting in a re-design of the system.

The hydraulic adjusters were re-located into the roller tappets which put them closer to the source of oil pressure and an oil screen was fitted to ensure they did not become clogged by dirt particles in the oil.

This solved the problems with that assembly completely. With the increase in power available from the Panhead engine came an increase in the forces at work in the bottom end of the engine and it was realised that the bottom end would need to be beefed up especially with the 1955 decision to offer a higher compression ratio model the FLH (the “H” being for “High Compression”).

The sprocket shaft was enlarged and the left side crankcase re-designed and fitted with Timken tapered roller bearings. There were also improvements made to the steel types used in key areas such as the crankpins and sprocket mainshaft. In 1958 the depth of the cylinder head cooling fins was increased and needle bearings were used on the camshaft.

After this time the improvements to the engine were progressive and mainly involved beefing up the crankshaft and its bearings to better cope with the stresses created by riders wanting to ride their bikes hard.

As far as the bike that the Panhead engine was fitted into, 1958 was the year the bikes were finally fitted with rear suspension using telescopic forks and hydraulic dampers. This was called “Hydra Glide” and saw the creation of the “soft tail” Harley-Davidsons. The old models with no rear springing were referred to as “hard tail” Harleys.

As the 1960’s approached there were two notable improvements made to the Panheads, one to the engine and another to the bike itself. In 1964 Harley-Davidson began making the engine valves from a nickel-based heat resisting alloy called Nimonic-80A. This was an alloy used in making the turbine blades for jet aircraft.

This change was probably not noticed by the vast majority of Harley-Davidson buyers other than the real technophiles but the change made to the bike in 1965 was noticed by everybody. In 1965 Harley-Davidson broke with tradition and fitted an electric starter in the bike which was now named the Electra-Glide. By this time the weight of the bike had grown substantially because of the new suspension and electric starter and to keep up with that extra weight the engine power was also increased to 65hp.

The Panhead engine had lasted for seventeen years, it had incorporated Second World War war-bird technology and even metallurgy from jet aircraft. But as the bikes had grown heavier Harley-Davidson knew they had to move with the times and create a new and even better engine to power their new generation of motorcycles.

A new generation of motorcycles from the Land of the Rising Sun was already invading American motorcycle dealerships and with their electric starters and superb performance and handling Harley-Davidson knew they needed to compete or perish. The British motorcycle manufacturers were already perishing in the face of the onslaught from the designs of Soichiro Honda. Harley-Davidson were determined not to go quietly into that dark night. Harley-Davidsons were “Born to be Wild” and they were an integral part of a whole culture that did not want to ride a Honda. 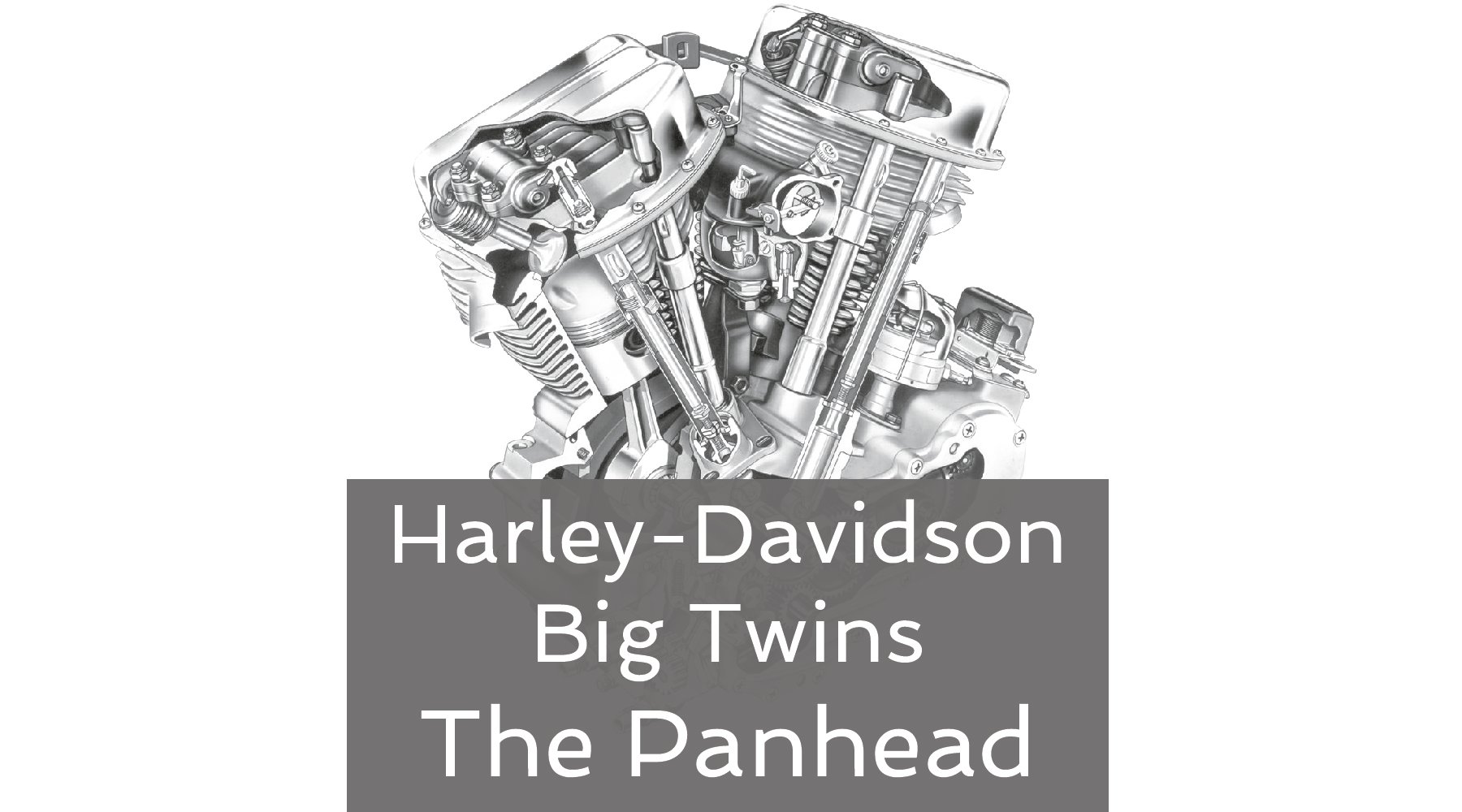