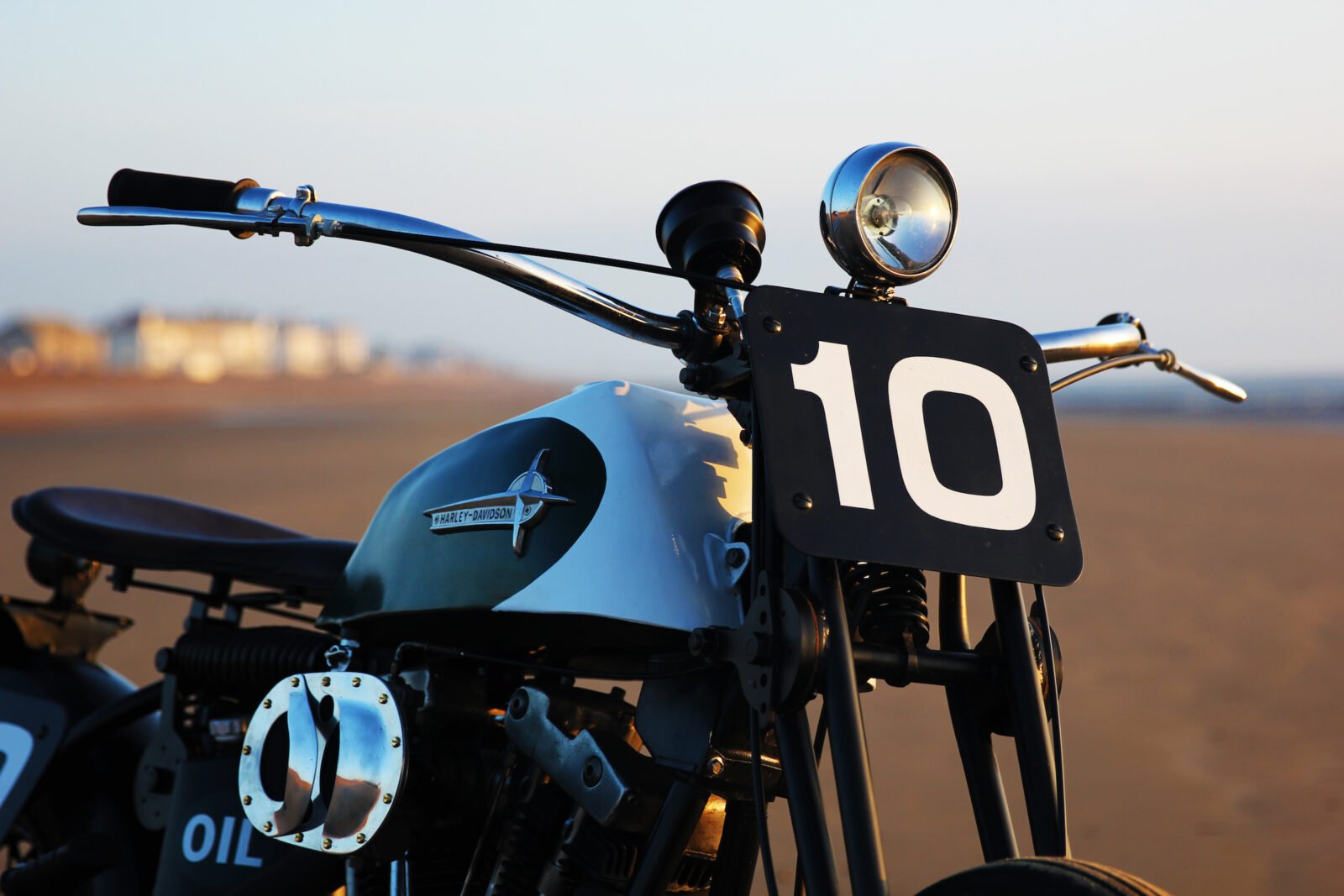 This article was written by Hoxton Moto Founder Shaun Fenton. When possible we like to bring you the story of a custom motorcycle in the words of the people who built it, to cut out the middle man and give you an insight into their thought process.

For years I have drooled over the styling of Harleys and Indians from the 1940’s. I was also inspired by the images of TROG in the USA. Finding and affording an original Harley or Indian of this era was beyond my means so this created an opportunity to build a replica with a twist.

So, with this in mind, I set out to find a cheap Harley as a donor bike. I decided on a 1970’s Ironhead. After a lengthy search, I finally found the ideal donor bike. The bike had been imported into the UK as a restoration project but aside from occasional tinkering it had languished in a garage for over 10-years. Without revealing our intentions, a deal was struck with the previous owner and I was then committed to the transformation. 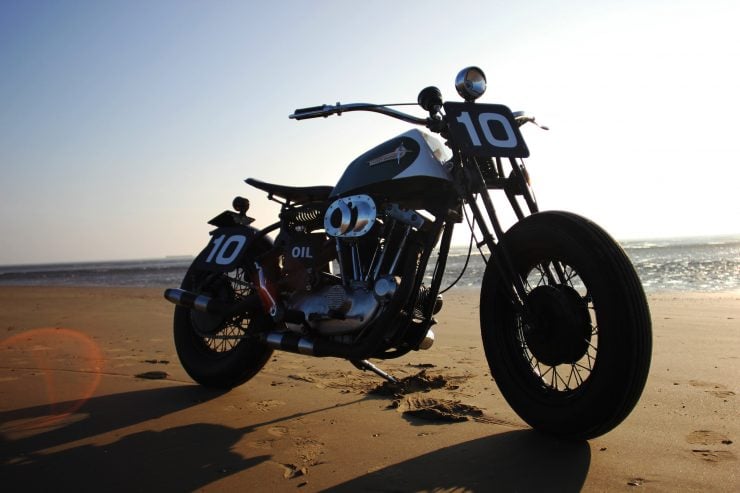 I stripped the donor bike completely, retaining just the engine and frame. Jake Robbins Engineering (renowned Bike Builder and Girder Fork Specialist) fitted a set of his hand-built girder forks and to create a rigid rear end. After a short one-way discussion and bamboozled by his vision, Jake persuaded me to let him loose on the rear suspension to create a friction damped, twin spring, live canter lever, spring frame. This was Jake’s homage to a Bentley & Draper Spring Frame. Like a man possessed the angle grinder came out, the welder spluttered and snorted and he smashed out the conversion.

Retaining the original rear wheel and brake, I sourced a 16’’ front rim and a drum brake from an Enfield Bullet. After producing the rolling chassis, I moved onto the styling.

Three important features of the styling were handlebars, fuel tank and the seat. Jake had some old bars collecting dust in his workshop which he donated and I set about fabricating the seat and tank.

The seat was relatively quick to fabricate once I had decided on the shape and dimensions. However, I deliberated over the fuel tank design. I didn’t want to build a classic shaped Harley tank, I wanted something unusual. After much carving, rasping and choking on foam particles, a shape emerged. Once the design was agreed I started to cut, bend and shape the sections of the tank, mount lugs, fittings and then snotted (welded) it all together. 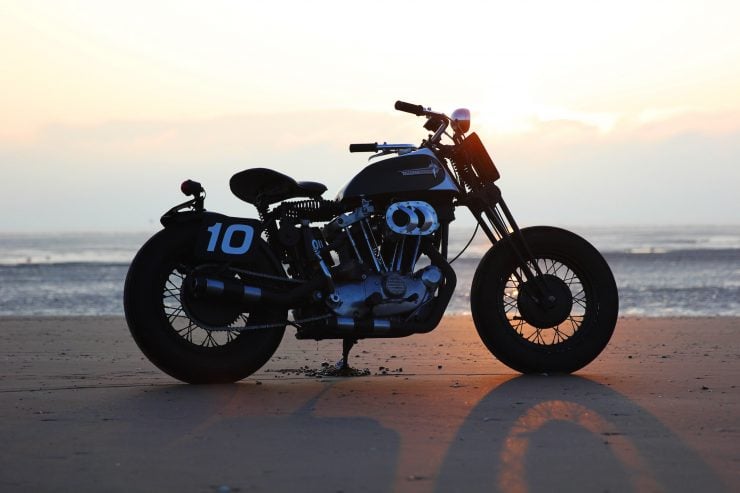 After completing the overall design, I had to find a way of mounting the essential oil tank and battery box. I built the oil tank from scratch; designed to be rubber mounted in the small space between the engine and frame. The battery box was yet another hand built feature and then mounted on the swinging arm.

A predominant feature of the Ironhead is the air intake housing. I looked at all the after-market designs, of which there are many, but decided that I had come this far and would fabricate my own. With the left-over alloy from tank build and a few hand tools the air intake shape evolved into its unique design.

The rear mudguard and lights were found at auto-jumbles. The seat was covered be Glenn Moger. The control cables and wiring were all done in-house. To finish off the beach racer look I fabricated and mounted the race plates.

Finally, the bike was sprayed and painted by hand, with a sign writer brushing in the numbers and tank design. 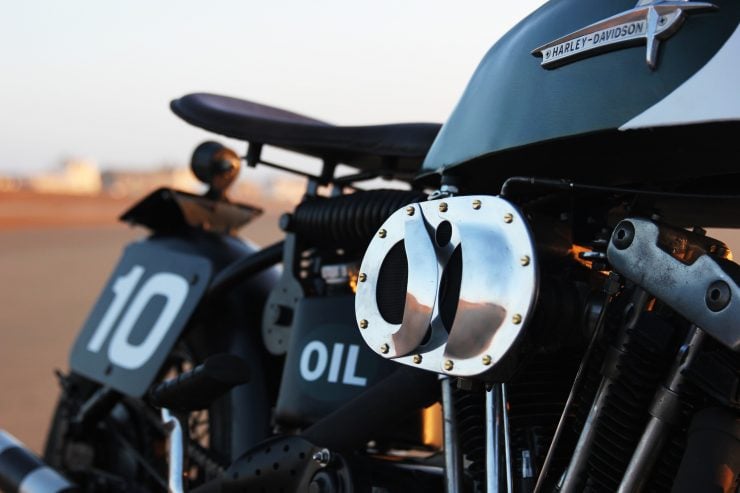 Hoxton Moto Founder, Shaun Fenton, started building bikes six years ago. He was a successful Television Producer, running his own company and producing a bundle of Network TV series. After years of chasing commissions and the relentless pressure of making commercial television, it became apparent that there was something missing and lacking in his life – a workshop.

“I’d spent my entire adult life living in London, where space is at a premium and I was living just to work. Something felt wrong and out of balance”.

Shaun made some difficult decisions; he downsized the business; set up his YouTube channel, Hoxton Moto; moved out of London to the coast; and bought a property with a workshop.

The workshop was quickly equipped with rudimentary hand tools, essential bench devices and the first donor bike build was wheeled in. Flash forward, four custom builds are completed and various classic restorations have rolled out of the workshop – and, crucially, a life balance has been found.

“Building bikes not only satisfies a desire to design, create and work out engineering conundrums it also opens you up to a community, a sub-culture and life style. For me, having the workshop allows me to build stuff, experiment with ideas, make mistakes, learn new skills and it’s also a place of absorbing distraction… I have to admit; custom bike building is an expression of myself – which can be disturbing”.

Hoxton Moto’s eclectic builds include a 1960’s Honda Race Replica, Honda CB550 Brat Bike, Moto Morini Café Racer and Harley Beach Racer. All the builds have been exhibited at The Bike Shed show, one of the largest custom bikes events in Europe. 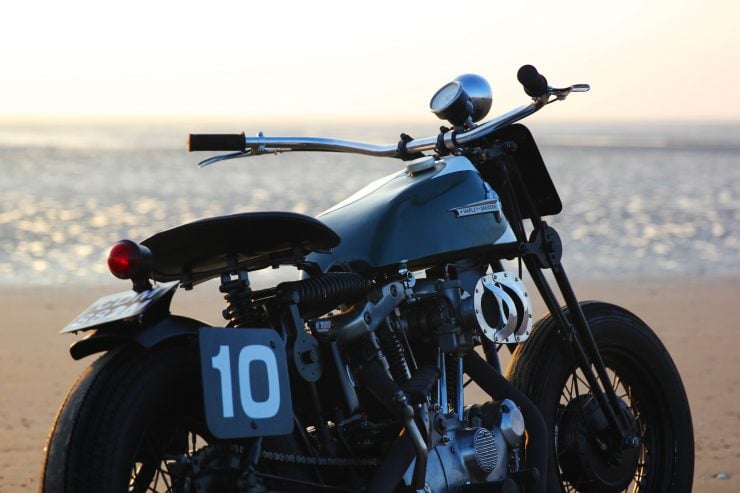 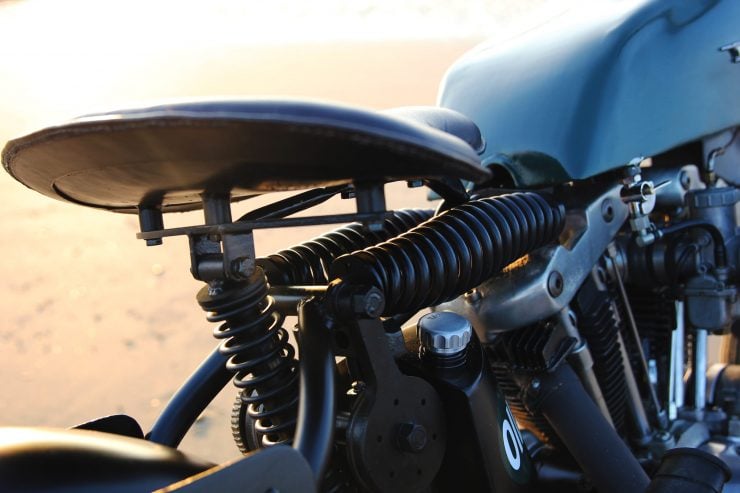 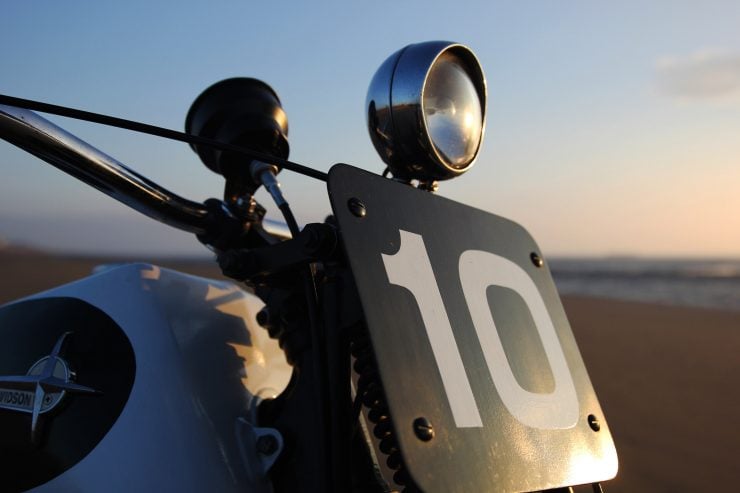 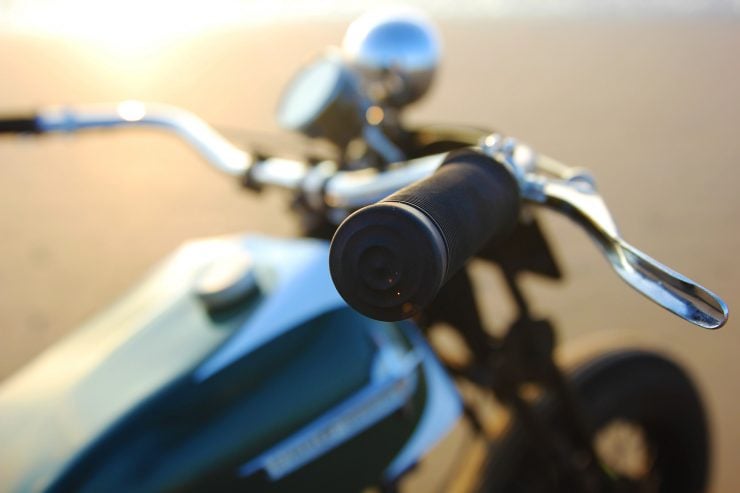 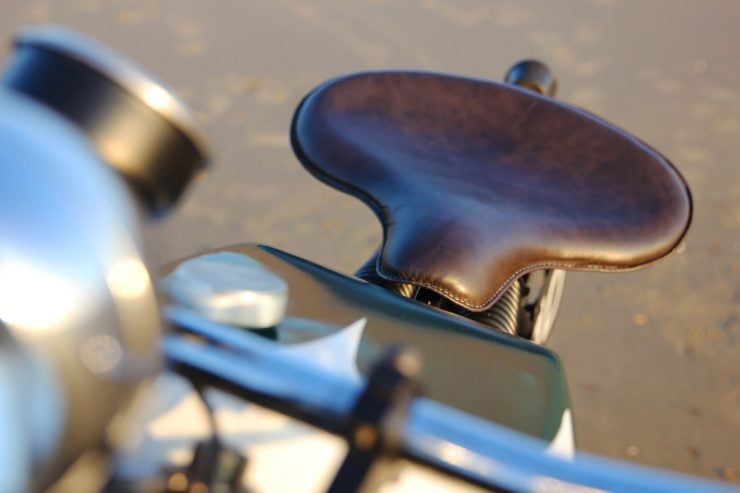 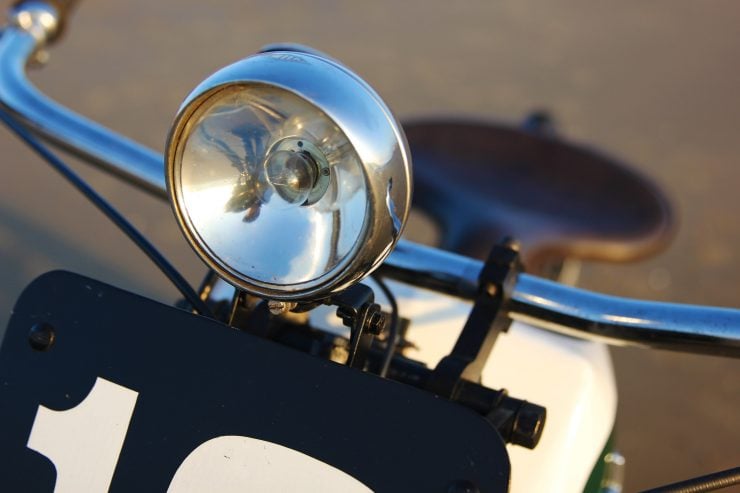 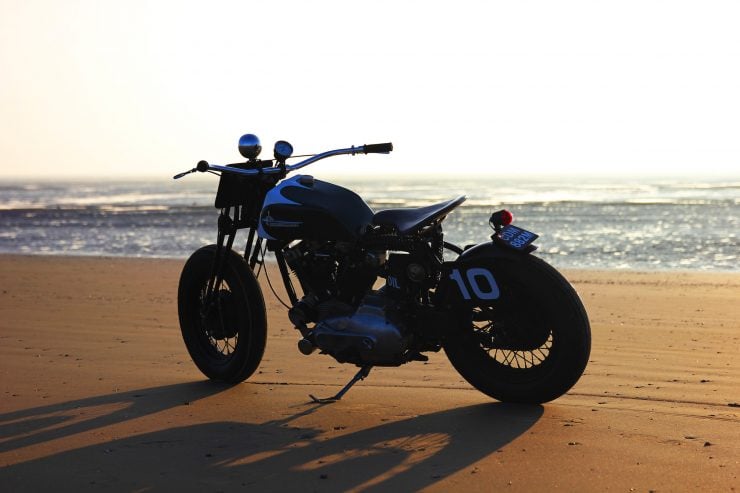 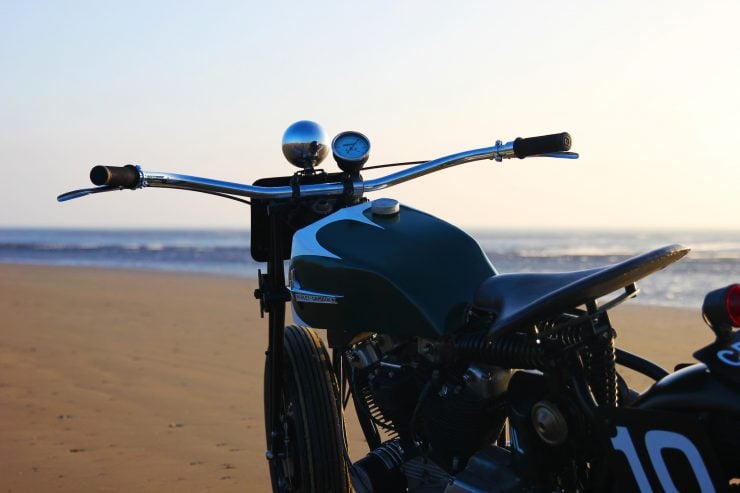 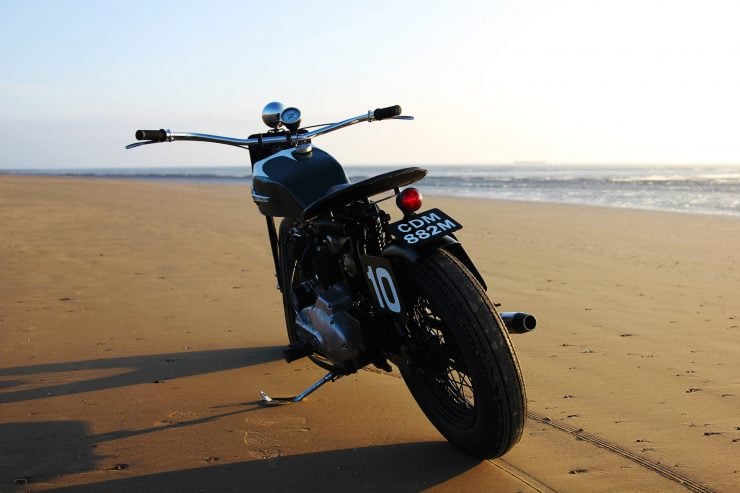 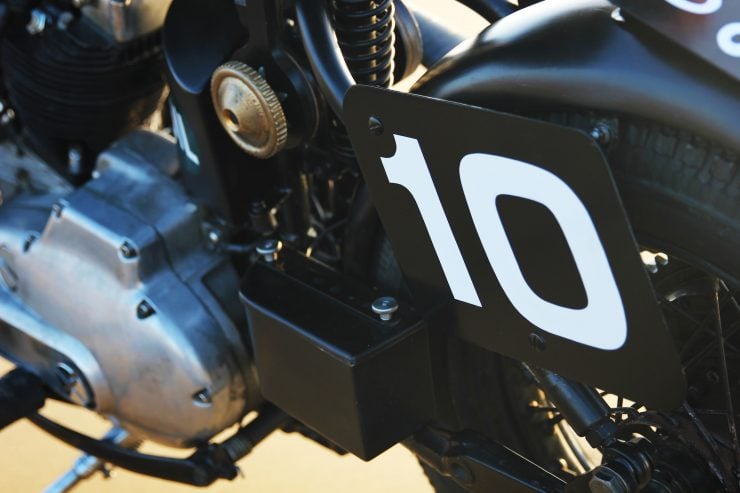 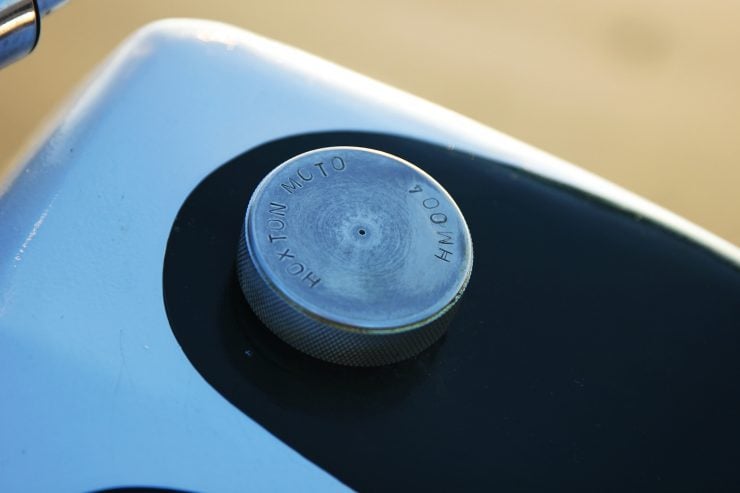 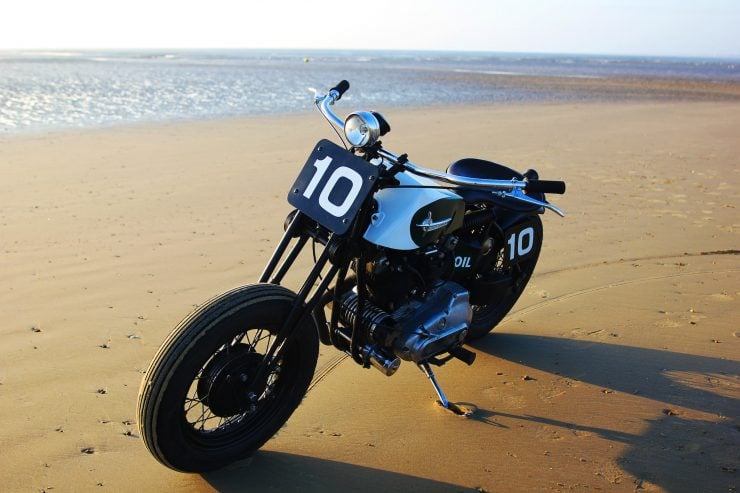 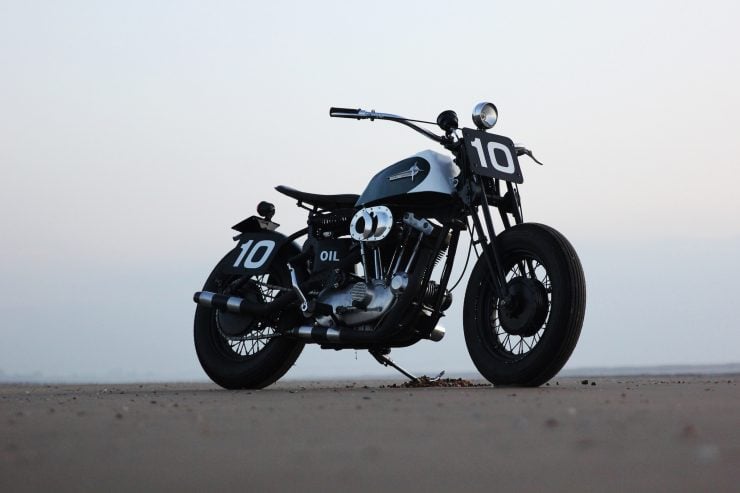 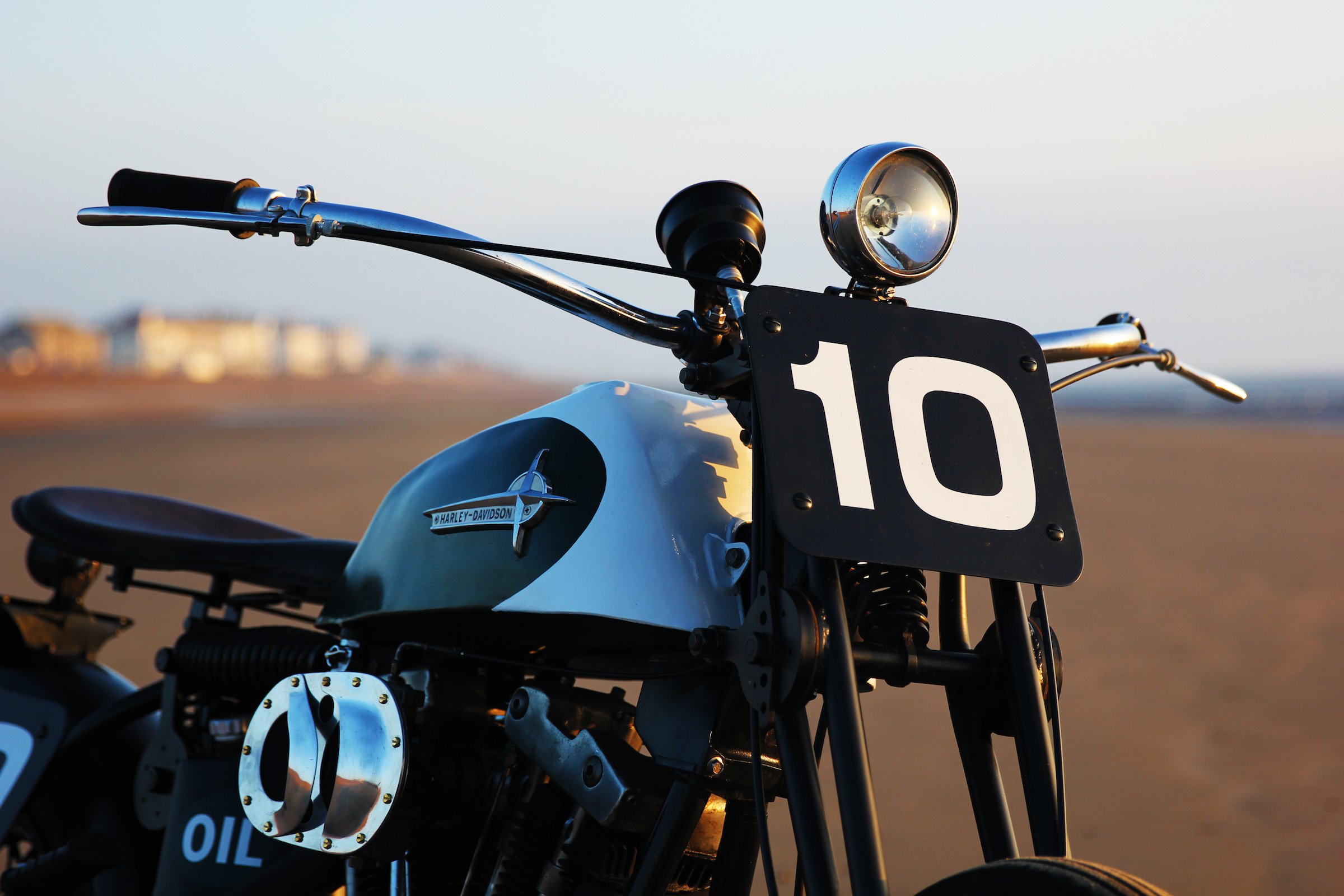