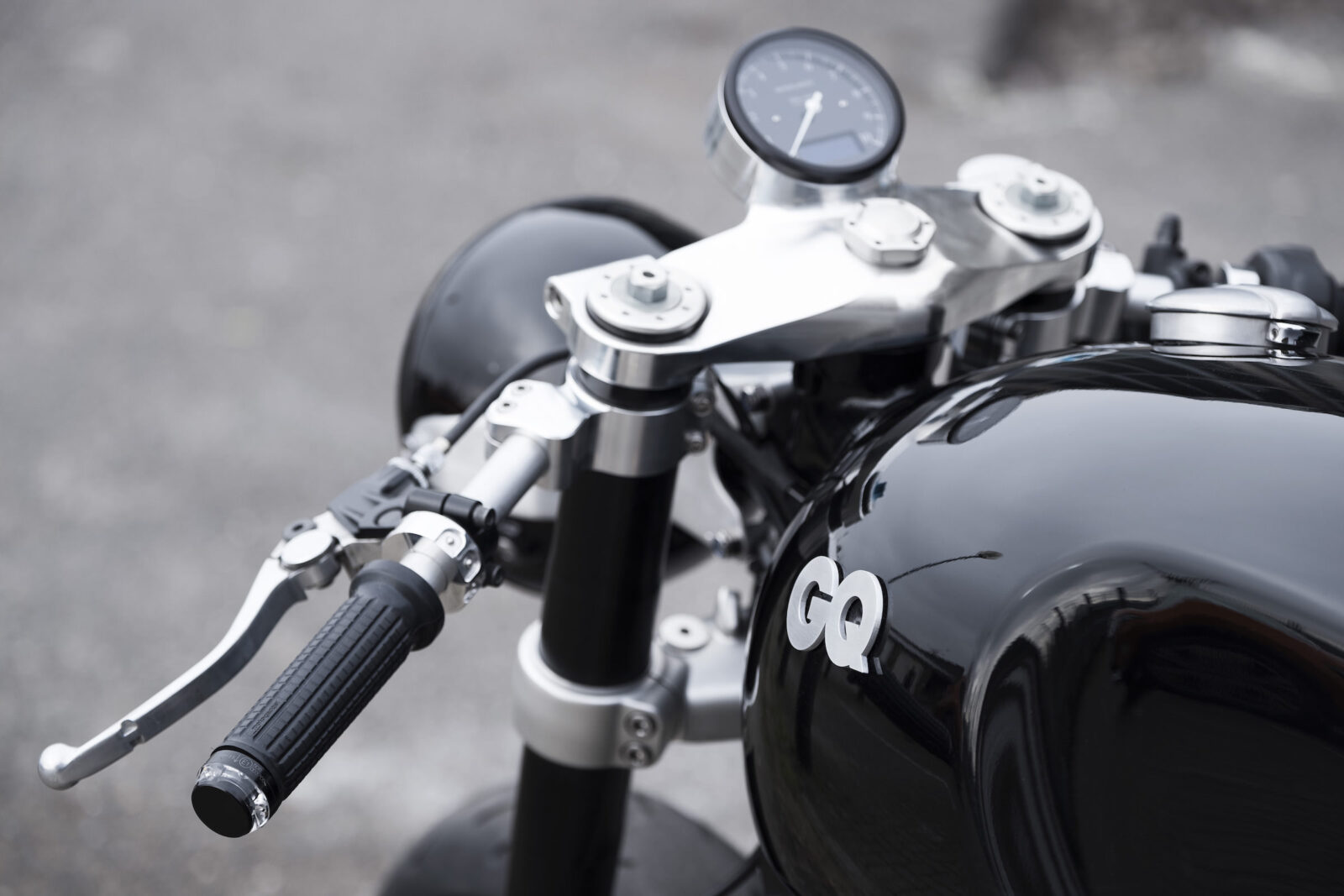 The Triumph Thruxton 1200 R is the top of the line model in the new generation of modern classic motorcycles built by the venerable British marque, and this one is a little more special than most – it was built by the team at Untitled Motorcycles for GQ and Barbour as part of the GQ Car Awards 2018.

Triumph developed a new 1200cc parallel twin for the Triumph Thruxton, it has a single overhead cam, multipoint sequential electronic fuel injection, and an 11.0:1 compression ratio, it produces 97hp at 6750 rpm, with 82.6 ft-lbs of torque at 4950 rpm – both of these figures are a big step up over the model’s 865cc predecessor.

Although often forgotten the talking about a new motorcycles facts and figures is the frame – though there are few elements more important for overall handling. The Thruxton 1200 R has a rigid tubular steel cradle that utilizes the engine as a stressed-member, and the swingarm is lightweight aluminum-alloy to help reduce unsprung mass. 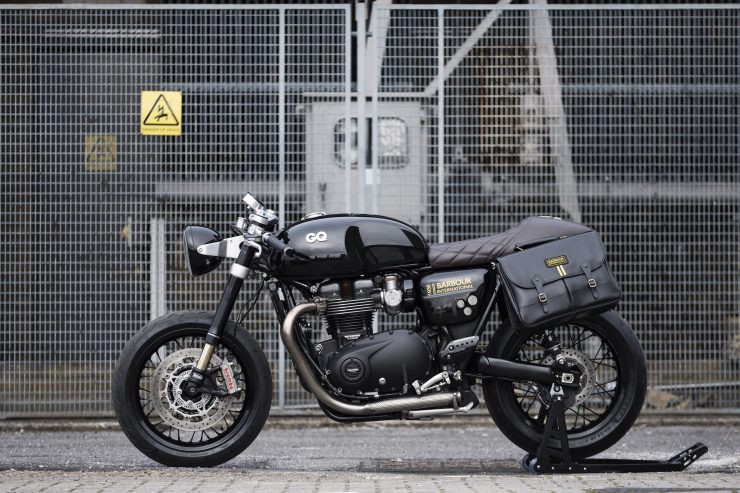 Interestingly the engineers at Triumph were able to reduce the weight of the new model compared to the previous Thruxton 900, so that despite the significant gain in engine capacity the total weight of the bike is a couple of kilograms lighter – an impressive feat given the size of the new engine.

This Thruxton was built by Adam Kay in London out of his world-renowned garage – Untitled Motorcycles. Adam was one of the first of the new generation custom motorcycle builders in Britain having started out almost 10 years ago – when the scene was far less crowded than it is now.

The team at GQ approached Adam to build their new bike based on this heritage, and once the brand-new Triumph had been delivered to his Hampstead headquarters the build began. The first step was to develop a series of CAD drawings on his computer using images from the official Triumph website as a guide – this allowed him to experiment with an array of looks and features without needing to open the toolbox.

The design brief for the bike was simple: GQ wanted it to showcase equal parts sophistication and strength. Blackshuckkustom was tasked with painting/powder-coating the tank, side covers, wheels, and other parts in a deep gloss black, and a new leather seat was made by Glenn Moger.

A new speedometer from Motogadget was installed into a custom designed and CNC milled bracket made by Fasttec Racing, above a set of newly installed set of Speed Triple R forks, and the headlight was mounted to a set of custom aluminum brackets.

There are water jet cut aluminum GQ logos on either side of the fuel tank coupled with twin Barbour briefcases on either side of the tail – as a hat-tip to the two brands that made the build possible. The completed bike is an excellent example of a modern cafe racer, and after the treatment from Adam I’d dare to guess that it’s notably quicker than it was in stock condition too. 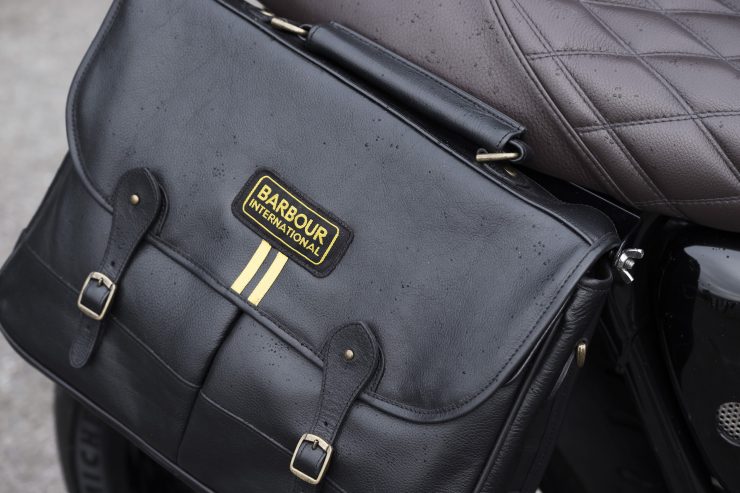 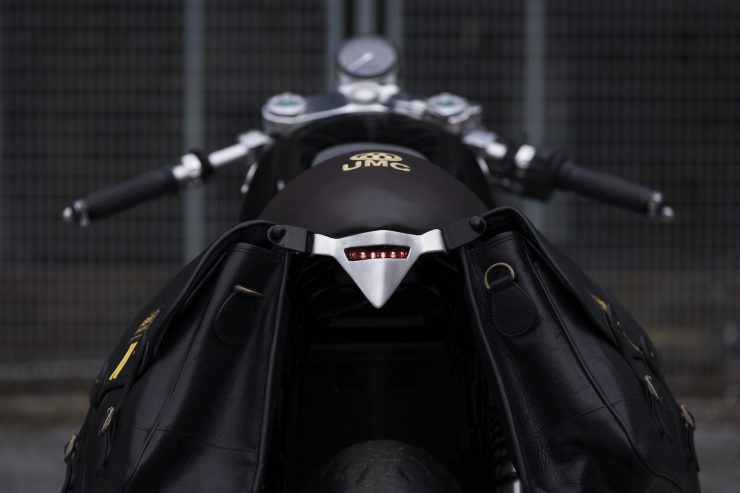 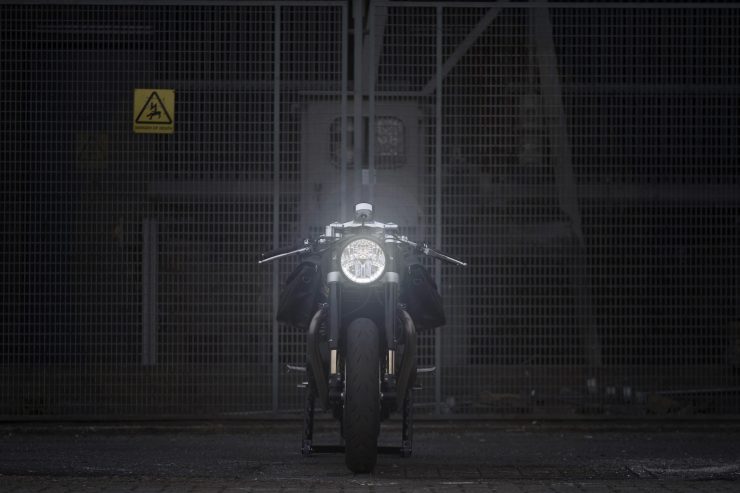 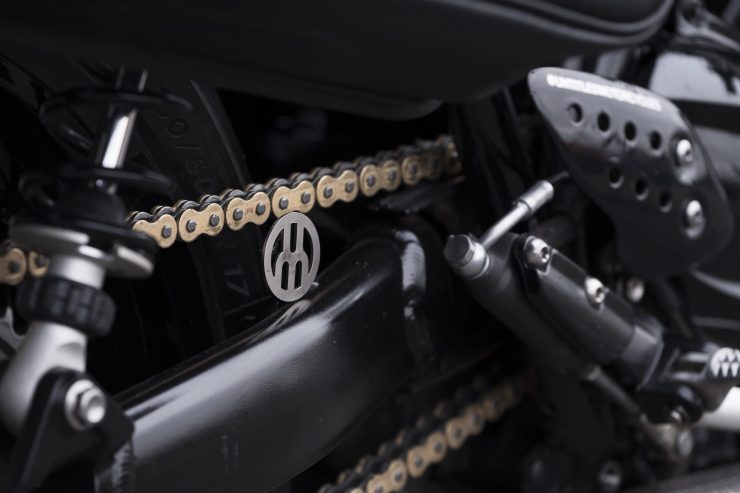 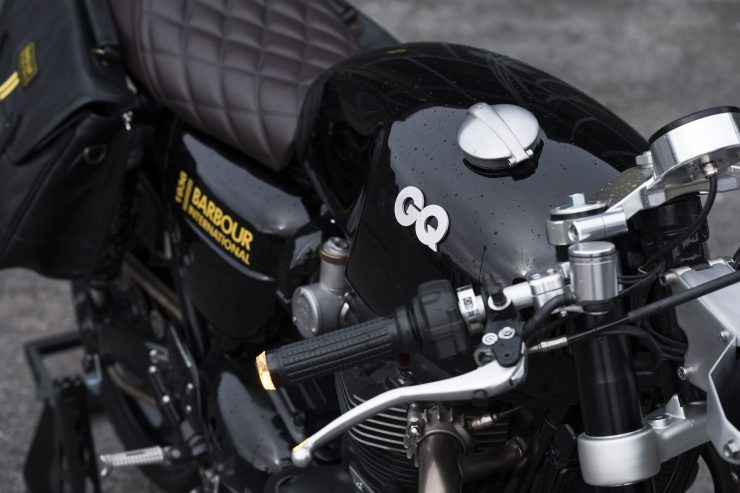 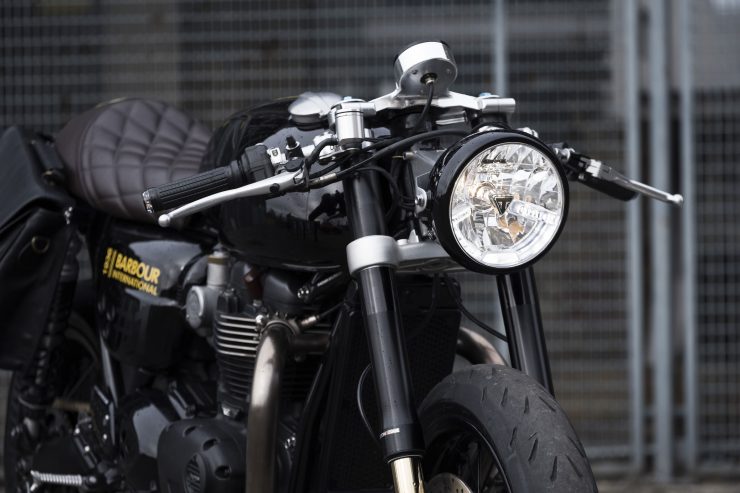 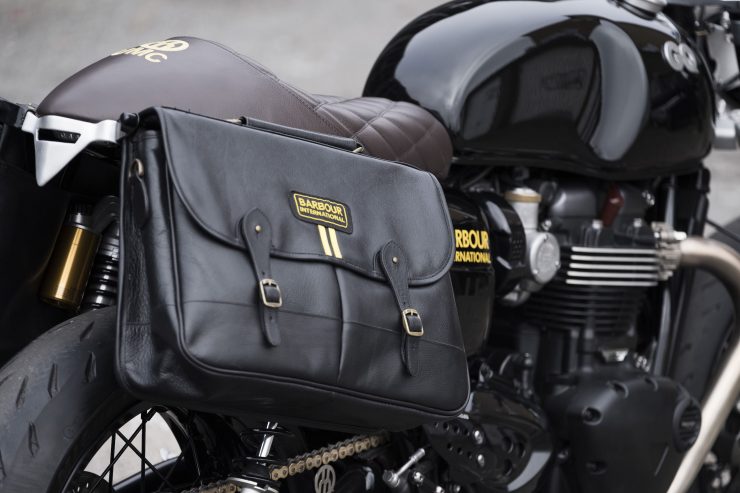 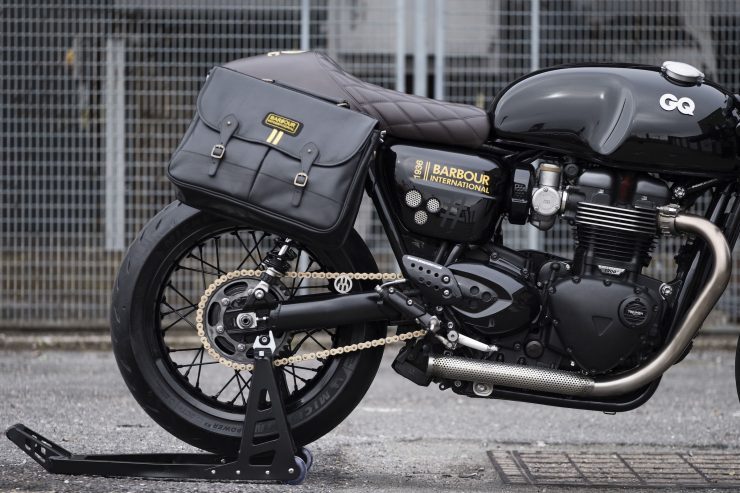 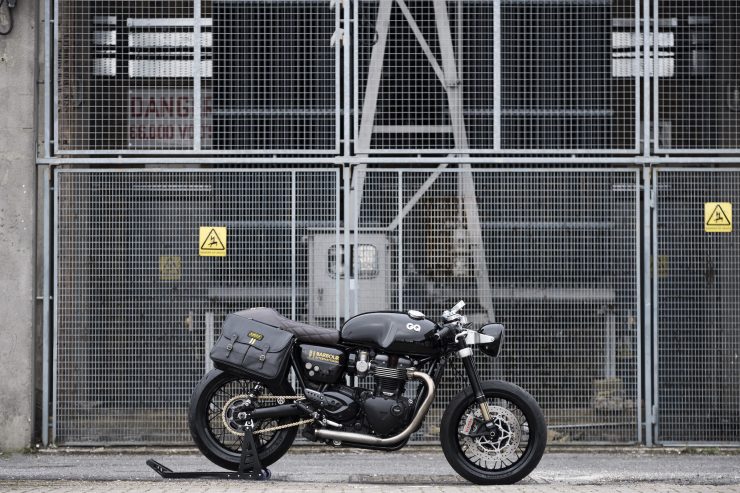 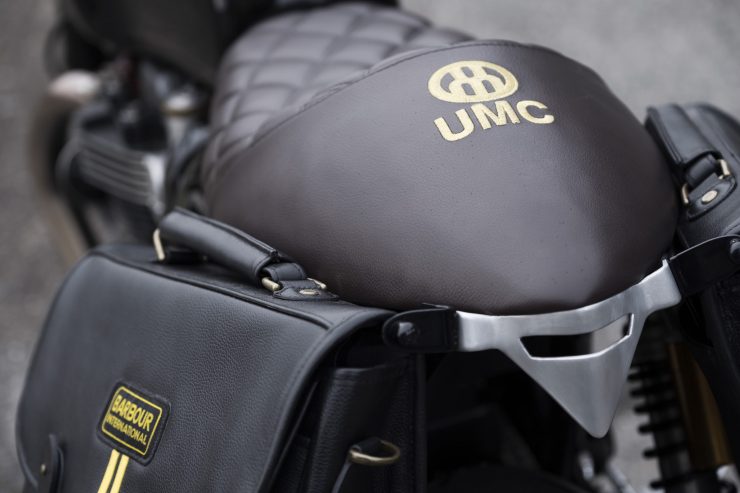 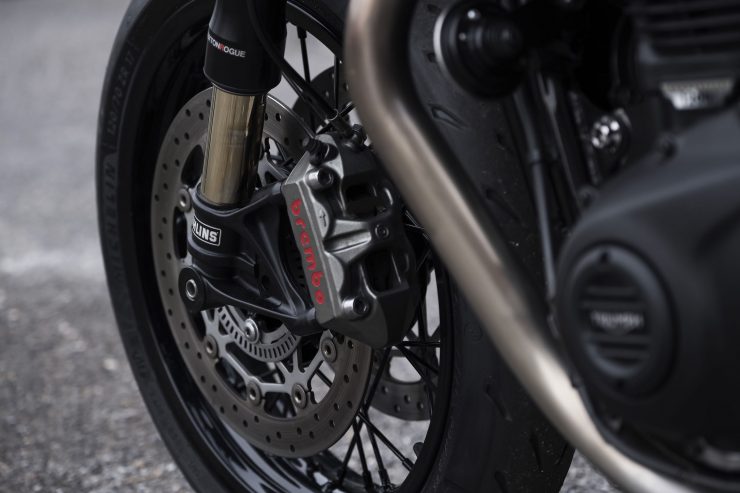 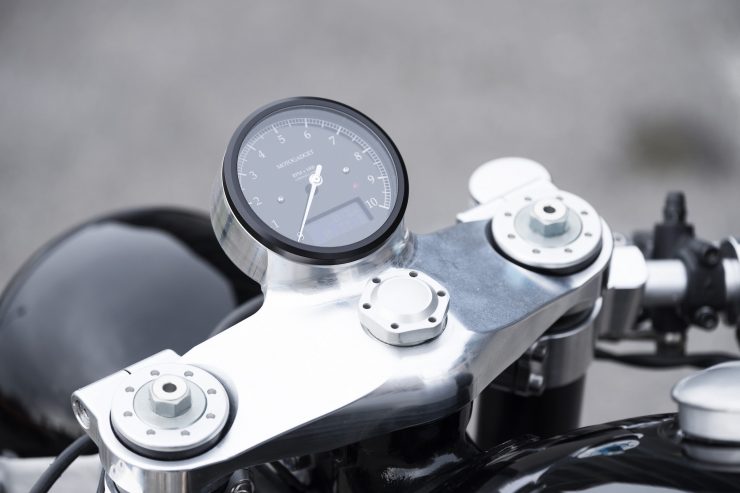 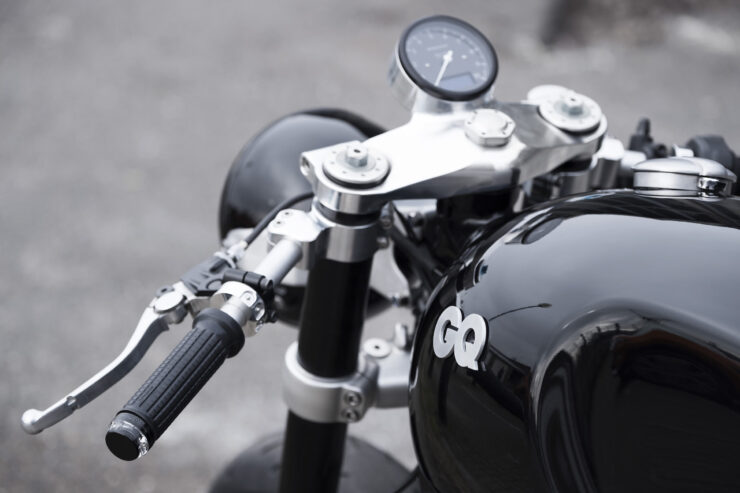 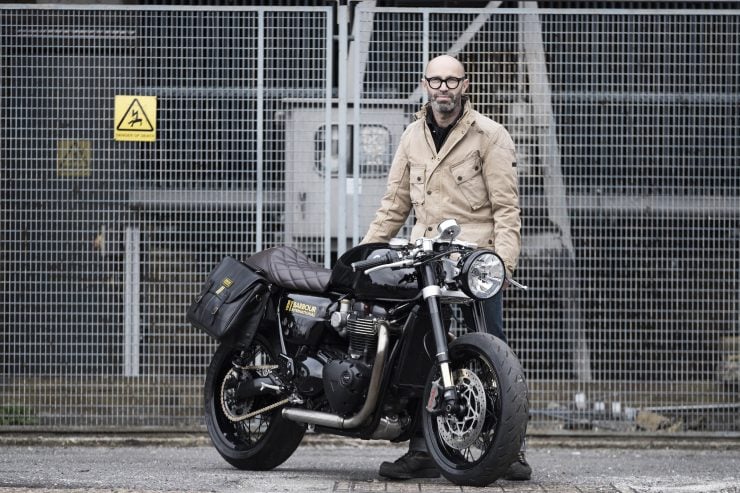 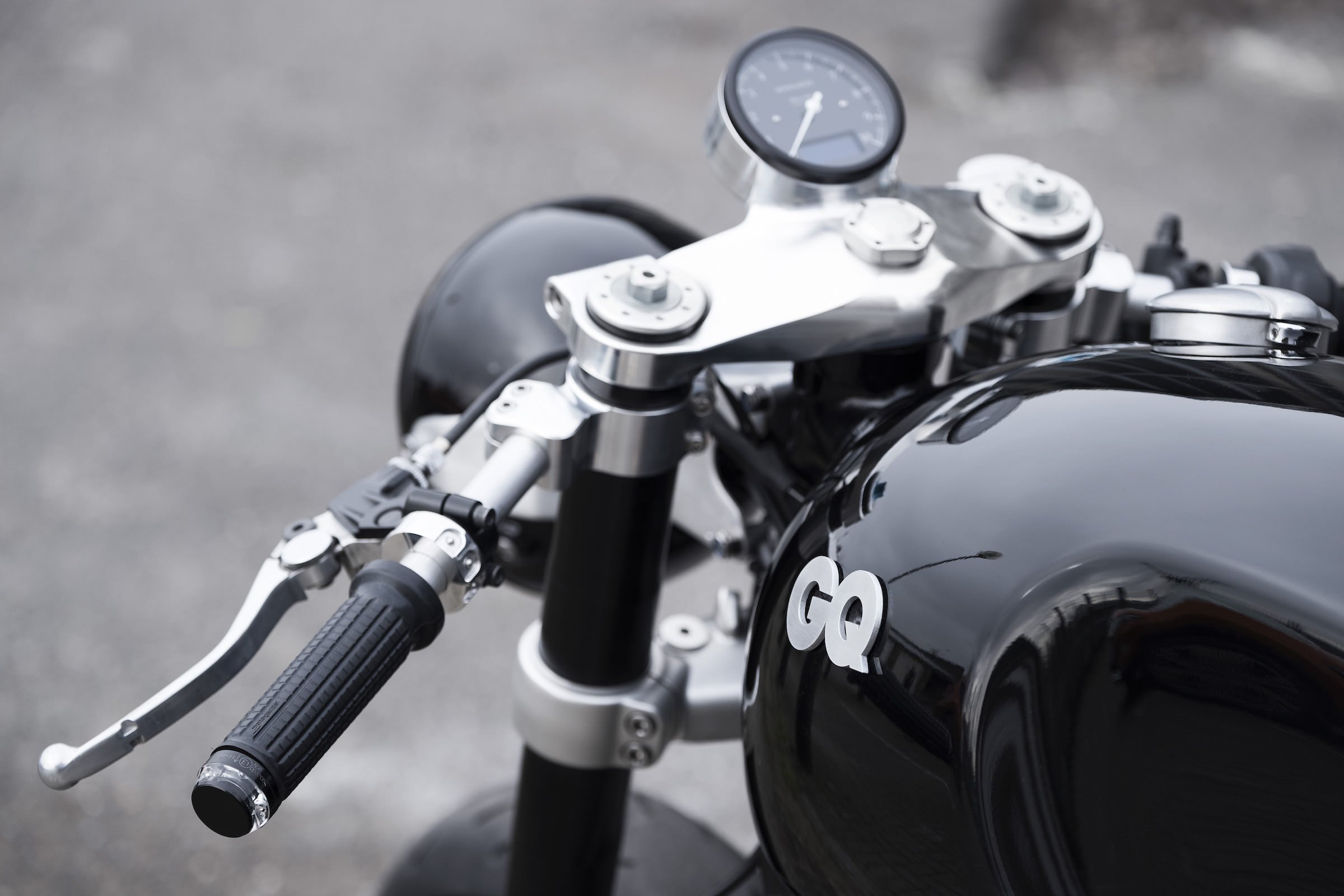