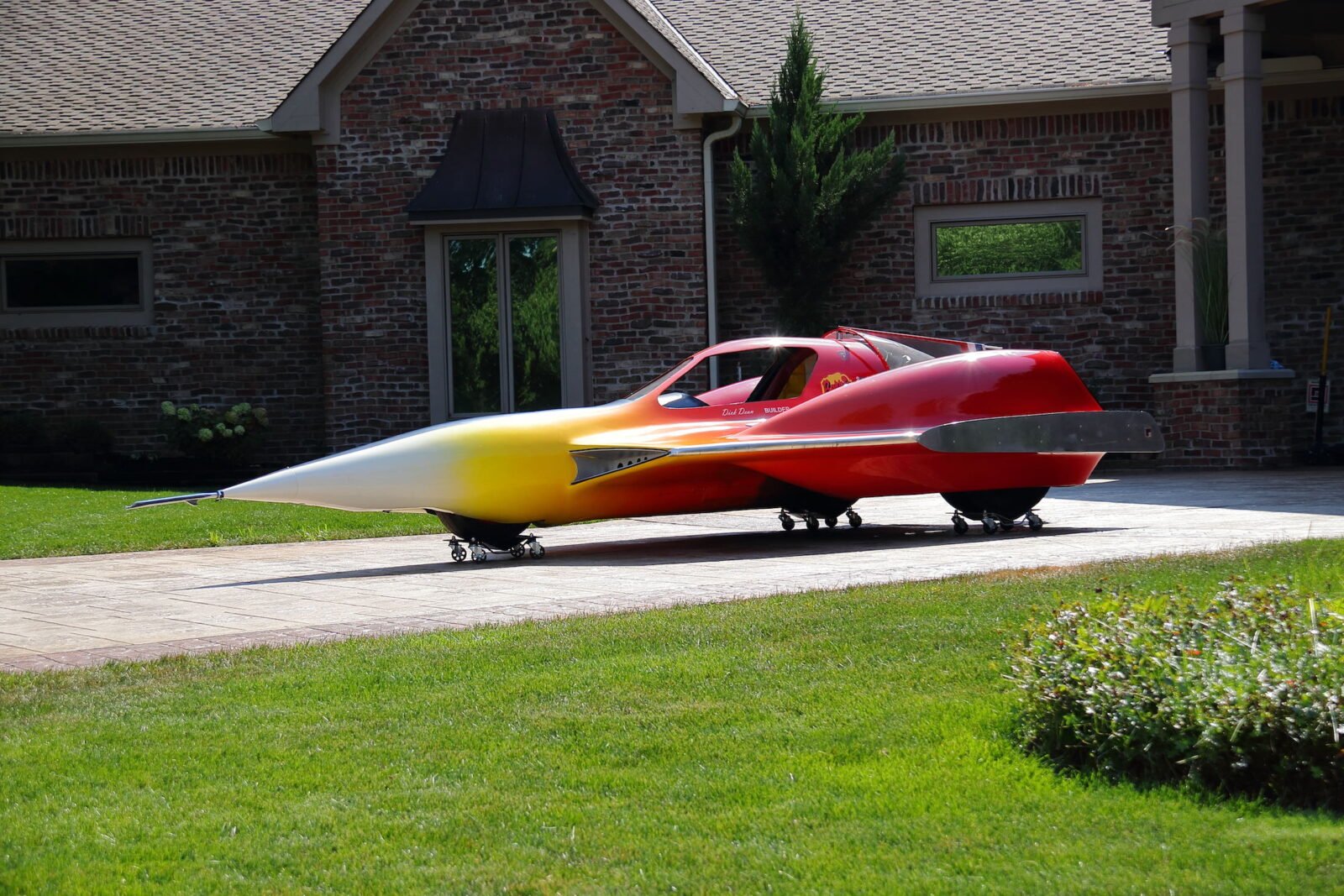 This is the 1964 Turbosonic Custom Dragster, it was designed and built by famed Hollywood vehicle creator George Barris, the man responsible for the original Batmobile, the Munster Koach, the The Beverly Hillbillies family truck, and a Cadillac limousine for Elvis Presley – to name just a few.

The name Turbosonic may not be familiar to you but it was a hot subject of debate in the drag racing world of the 1960s. Turbosonic was the name of a company that offered mail order micro-turbine engines that weighed 120 lbs but could produce up to a (claimed) 1,000 hp.

When it comes to outlandish American custom cars there is no name more famous than that of George Barris, a man who had immigrated to the United States as a young child with his brother and father after the death of his mother, and spent much of his childhood working in the family’s Greek restaurant.

Above Video: George Barris talks about developing the first Batmobile.

George and his brother Sam were drawn to cars from a young age, customizing them and selling them on for a profit while they were still in school. In the years after WWII the work of the Barris brothers began to draw more and more attention, and by the late 1950s they were the de facto custom car builders for Hollywood.

Over the course of the decades-long reign of Barris Custom Industries some of the most memorable cinema cars in history would roll out of the workshop, including (as mentioned above) the first Batmobile, the updated versions of KITT from Knight Rider, the Torino from Starsky and Hutch, the Munster Koach and the Munster Drag-U-La dragster, and the truck from The Beverly Hillbillies.

That’s not all that Barris and his team did, it’s just the highlights reel. Perhaps the most interesting client that Barris ever had was NASA, who requested the blueprints to the Moonscope, a custom six-wheeled vehicle with spider-like suspension than NASA wanted to study when they were developing the Lunar Rover.

The Turbosonic Custom Dragster was built in 1964 to make use of the Turbonique micro-turbine, an engine that had been developed by Clarence “Gene” Middlebrooks Jr, a Georgia Tech alumni who had worked with Martin-Marietta on the propulsion system for the Pershing missile program before starting his own company – Turbonique. 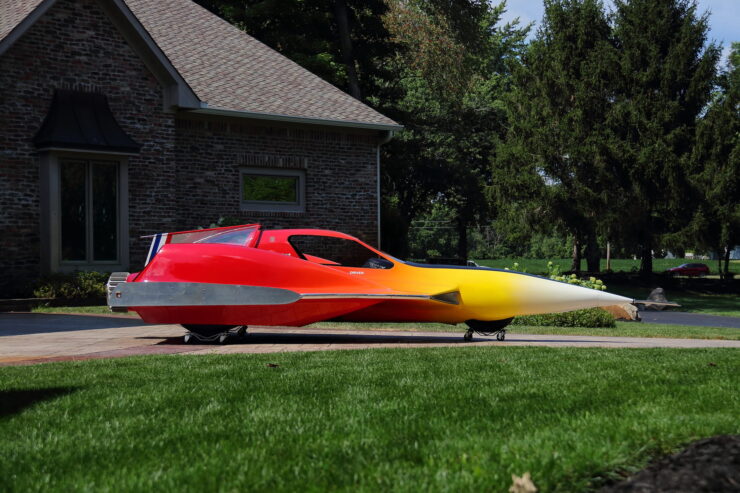 The Turbosonic Custom Dragster has a delta-wing shape and was designed to be fully functional.

Turbonique became famous for offering micro-turbines advertised in the classified ad sections in the back of magazines. The turbines claimed to be capable of 1,000+ hp, they ran on isopropyl nitrate monopropellant, and they had the unnerving habit of becoming a bomb if the driver let off the throttle and then reapplied it suddenly.

One of the company’s most famous offerings was the TB-28 or the “Drag Axle,” it was a micro-turbine that mounted directly to the rear axle of a vehicle to supplement the power provided by the engine. The TB-28 drove the axle via a Borg Warner sprag clutch, and due to its “on or off” nature it was intended for drag racing.

The Turbosonic Custom Dragster was designed with an alloy frame and a body made largely from fiberglass with some alloy sections. The design work is credited to George Barris, Les Tompkins, Dick Dean, and Tom Daniels, with Skip Torgeson tasked with driving duties.

The Delta V-shape of the vehicle was rising to prominence due to the military employing such designs in aircraft like the Lockheed SR-71 Blackbird which was also built in 1964. The Turbonique micro-turbine engine required that the vehicle be fitted with a parachute and four stabilizer wing flaps.

This vehicle is now coming up for auction with Mecum in January, the listing explains that it comes with vintage photos and postcards as well as the Barris Kustom City news release included. If you’d like to read more about it or register to bid you can click here to visit the listing. 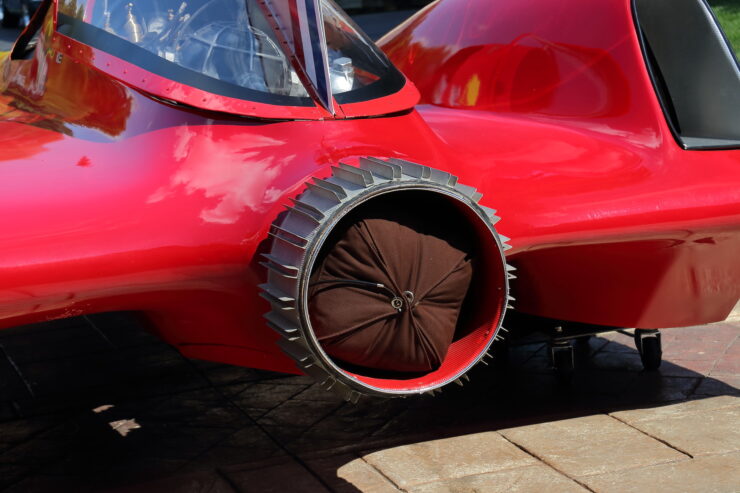 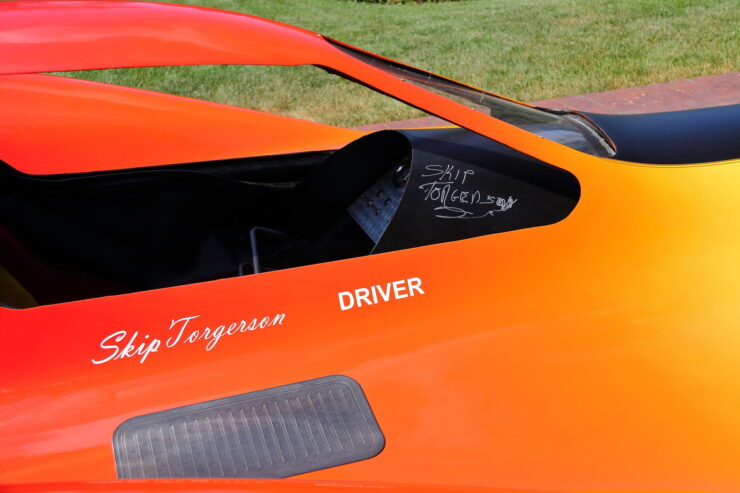 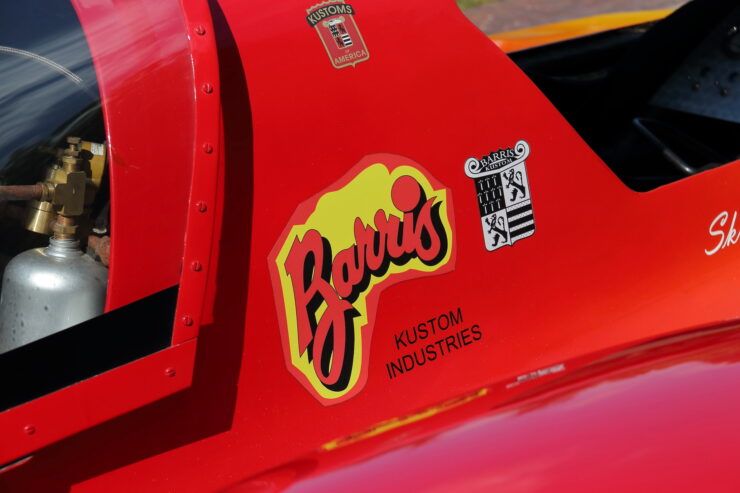 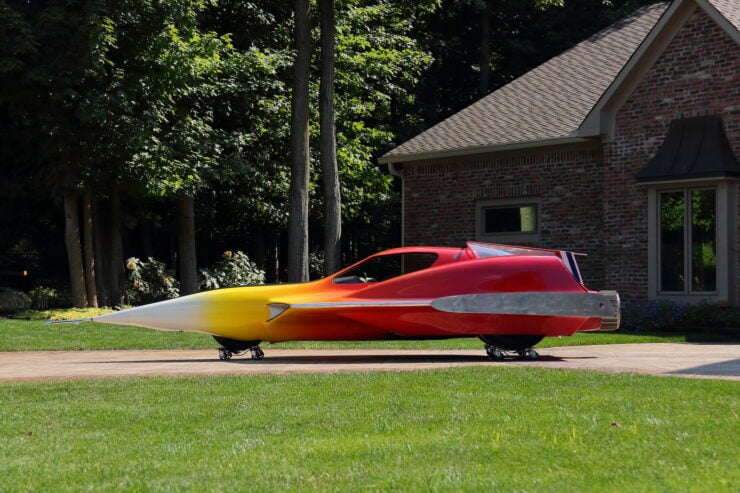 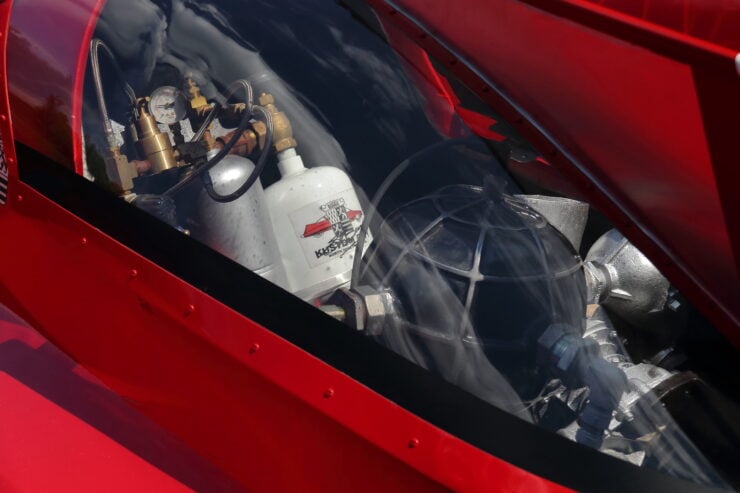 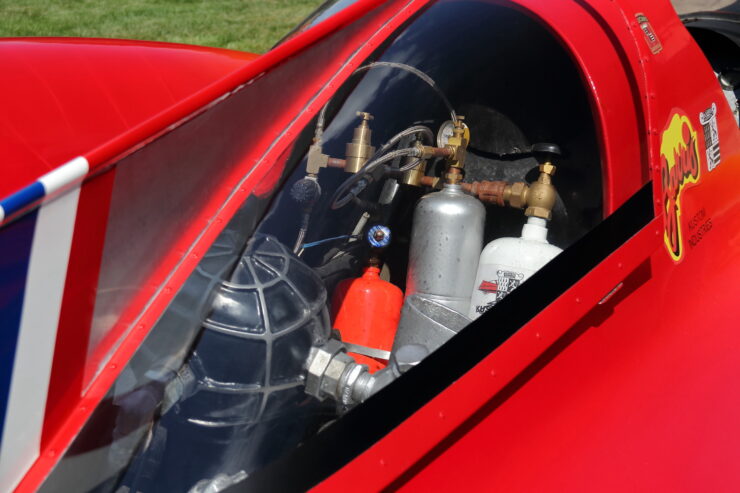 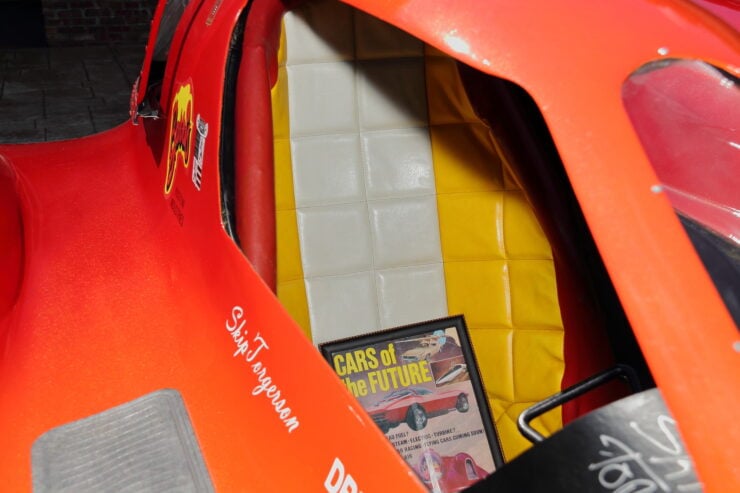 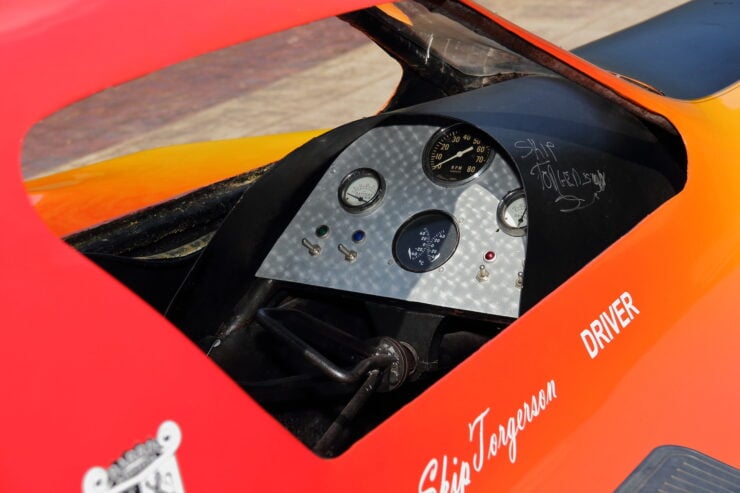 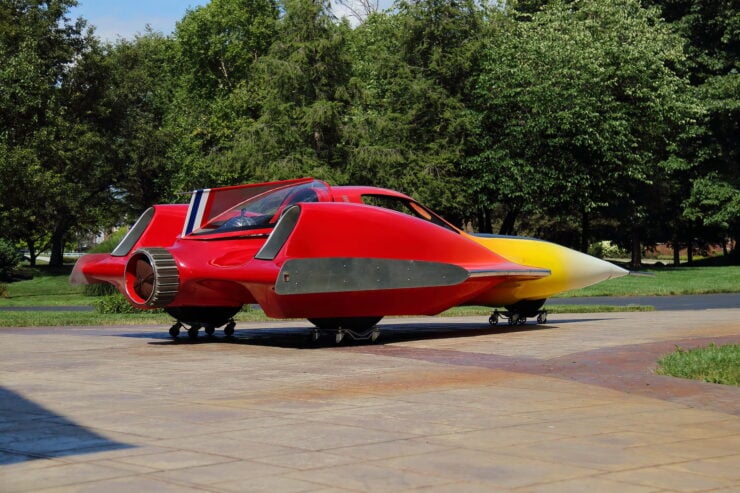 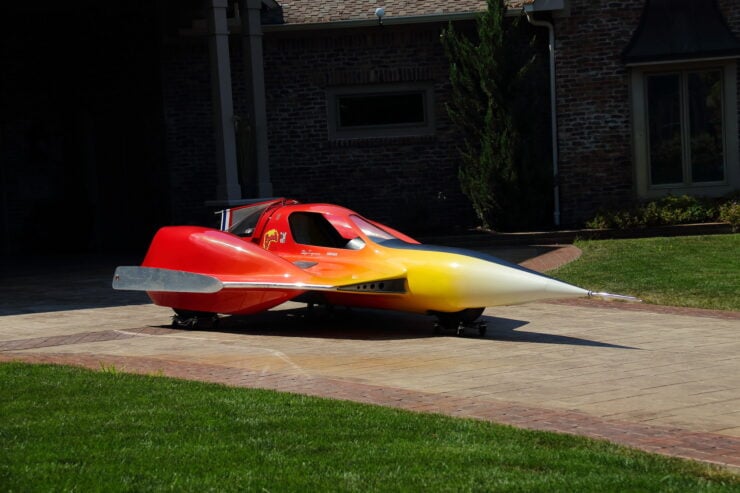