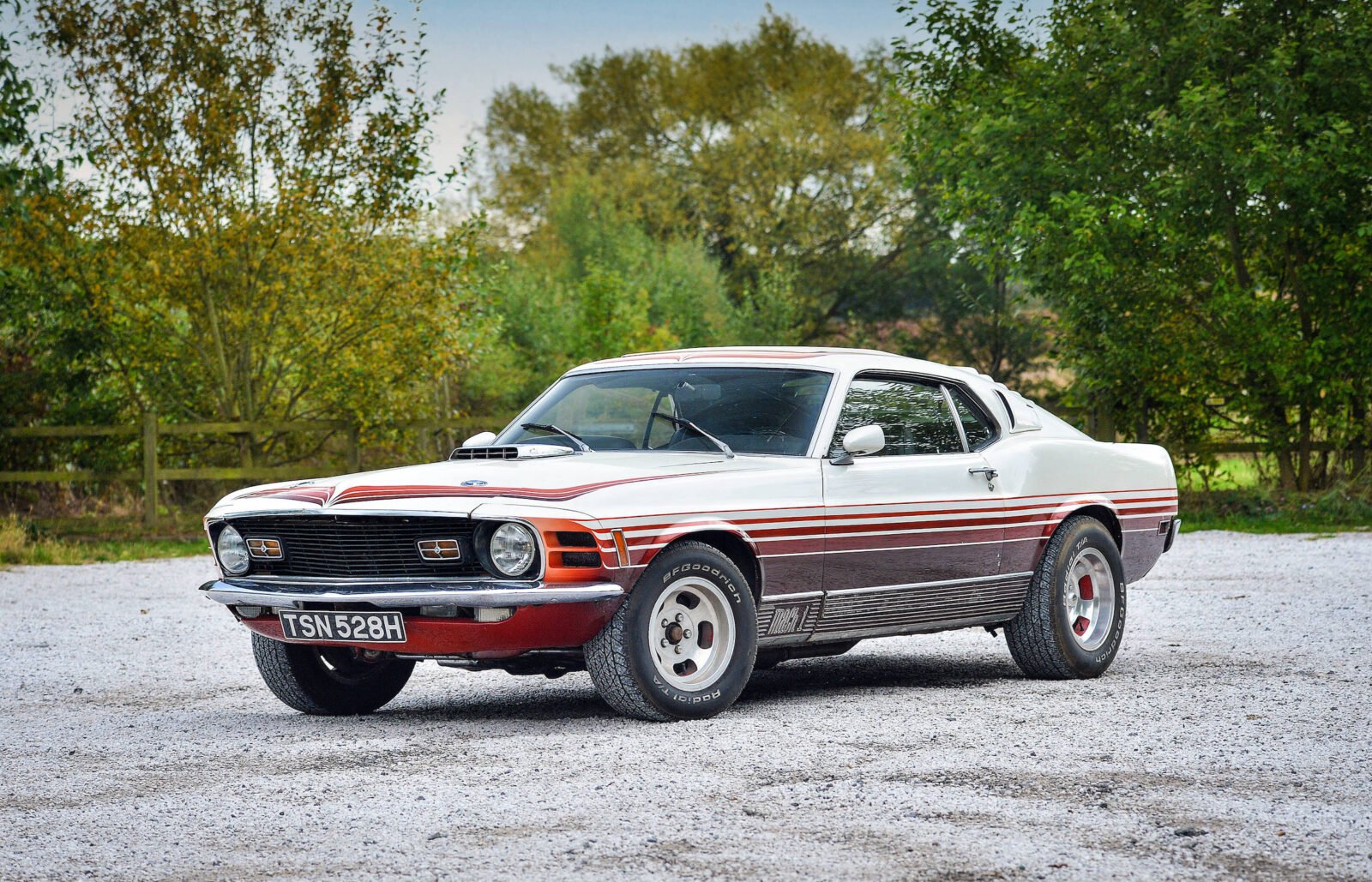 Ford had been hard at work creating faster and ever more desirable versions of the Mustang to compete with rivals like the Chevrolet Camaro and Pontiac Firebird. The Mustang had created the pony car market segment when it was released in 1964 however the competition had wasted no time catching up.

When Ford introduced the Mustang in 1964 they didn’t realize just how much of a success it would be. It was a car that created the entirely new “Pony Car” genre after its running horse (Mustang) logo. 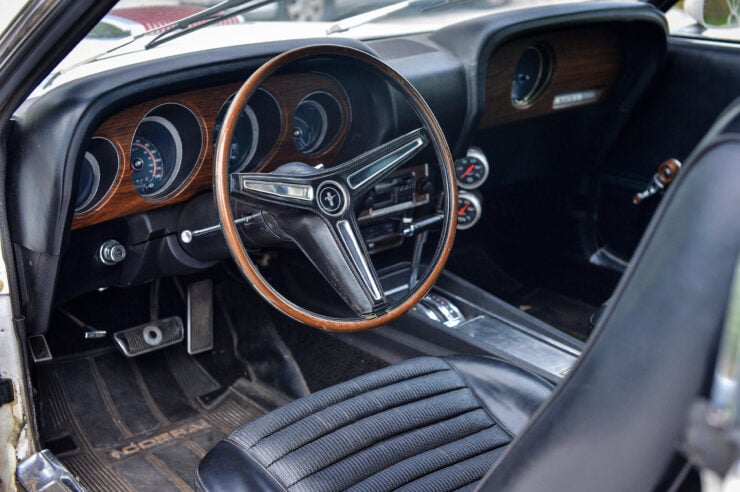 The distinctive interior of the late 1960s Ford Mustang was left largely untouched on the Mach 1s, with most of their modifications being limited to the exterior and engine bay.

Ford sold hundreds of thousands of Mustangs in the 1960s as the other American automakers all rushed to catch up they realized they didn’t just need to match the Mustang, they needed to beat it. Ford worked with Carroll Shelby on the pricey Shelby GT350 and GT500 versions of the Mustang however these were typically produced in somewhat limited numbers.

By the late 1960s it was clear that the Mustang was falling behind, and drastic action was needed to get the original pony car back to the top of the hill.

1969 would be a critical year for the Mustang, and it would be a year when the car did (arguably) reclaim its place atop the pony car mountain. It would be in ’69 that Ford released the Mustang Mach 1 as well as the Boss 302 and Boss 429, and both the Shelby GT350 and GT500 were updated.

The Mach 1 would be the best seller from this list, likely because it had the most competitive pricing. It sold so well that in its first full year of production Ford sold 72,458 of them.

The Mach 1 could be distinguished from the other Mustangs in production by its adornments, most Mach 1s had a black hood with hood pins, a hood scoop, a Mach 1 side decal, a black rear spoiler and front splitter, and some had louvres over the fastback rear window. 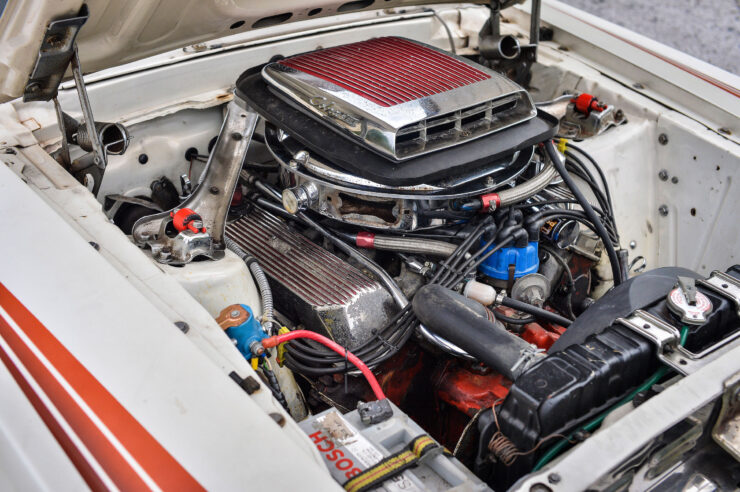 This vehicle has the desirable shaker hood option, the hood scoop is bolted directly to the top of the air filter housing and it exits through a hole in the hood. It gets its name from the fact that you can see the hood scoop shaking slightly when the engine is running.

There can be no denying that the Mach 1 looked fast, but Ford wanted to ensure that it actually lived up to its appearance, so it was given a number of engine options including the 351 cubic inch Windsor V8 which came as standard, this could be upgraded to a higher performance version of the 351, or you could opt for a 390 or 428 cubic inch V8.

All Mach 1s were given upgraded suspension but the big block 428 cars also received reinforced shock towers up front and thicker sway bars to try to compensate for the mass of the V8 under the hood.

In order to drum up publicity for the new Mach 1 Mustangs Ford hired racing drivers Mickey Thompson and Danny Ongais to take three Mach 1s to there Bonneville Salt Flats – the men were tasked with breaking as many speed records as possible.

They succeeded admirably at the undertaking, setting over 260 speed and endurance records over a series of 500 mile and 24 hour courses.

Above Video: Silent footage from the record breaking Mach 1 visit to the Bonneville Salt Flats in 1968 with Mickey Thompson and Danny Ongais taking turns behind the wheel.

The Mach 1 you see here was nicknamed “G Force” thanks to its unusual paint scheme that was applied under the direction of its owner Barry Sturges.

It originally included a full respray with a Snow Pearl base coat, this was then topped with a coat of Silver Mist Pearl. The stripes were applied in Burnt Orange Candy and then the whole thing was finished off with six coats of lacquer.

The original paint scheme included a quintessentially 1970s-style mural on the bonnet by an American artist called Lee Roy Strange depicting people in a spaceship. It would be this mural that would give the car its “G Force” nickname, a nickname the car still carries even though the mural was painted over long ago when such things became uncool.

Sturges was a keen amateur drag racer, an unusual sport in Britain at the time. He’s said to have managed a mid-14s run in G Force against a similarly 1970s-named car – “Neon Star.” 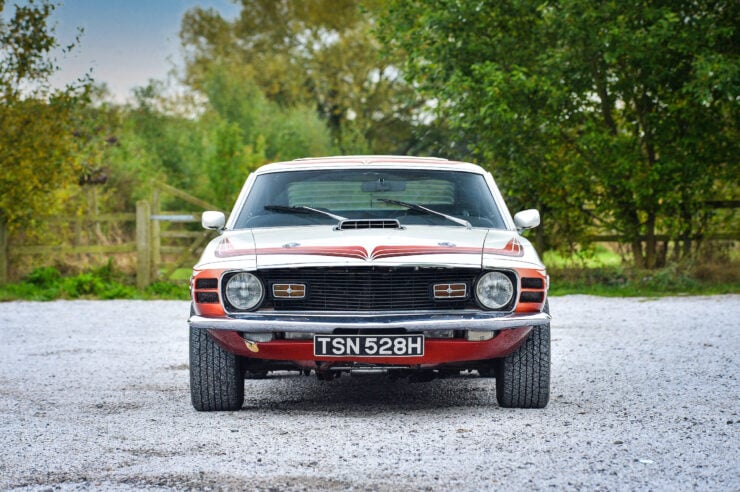 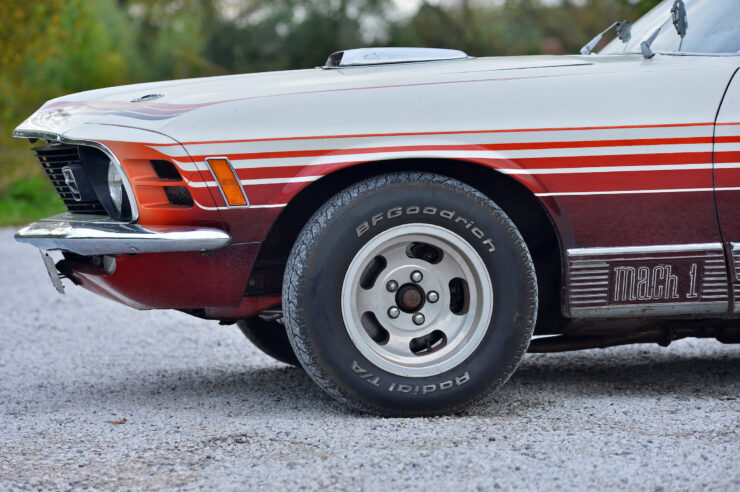 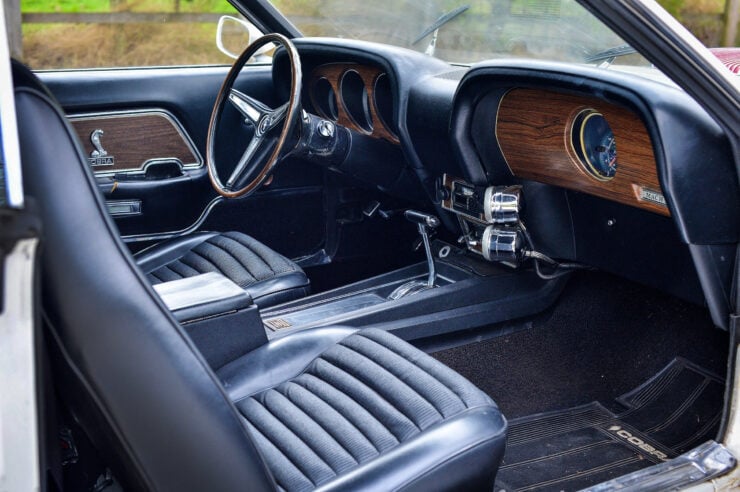 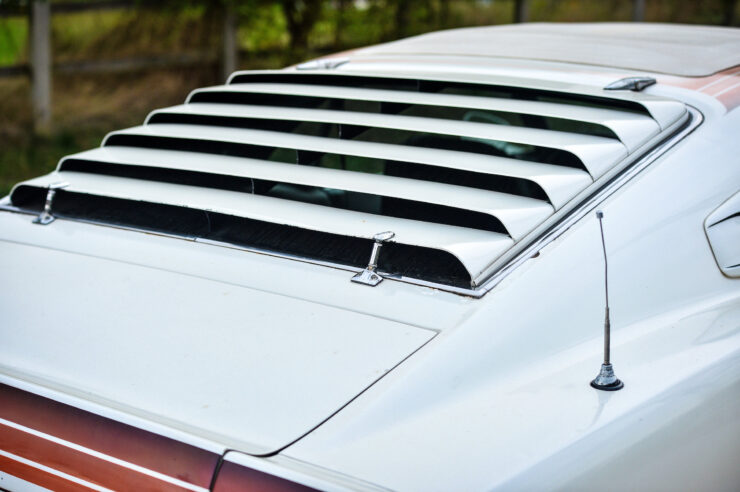 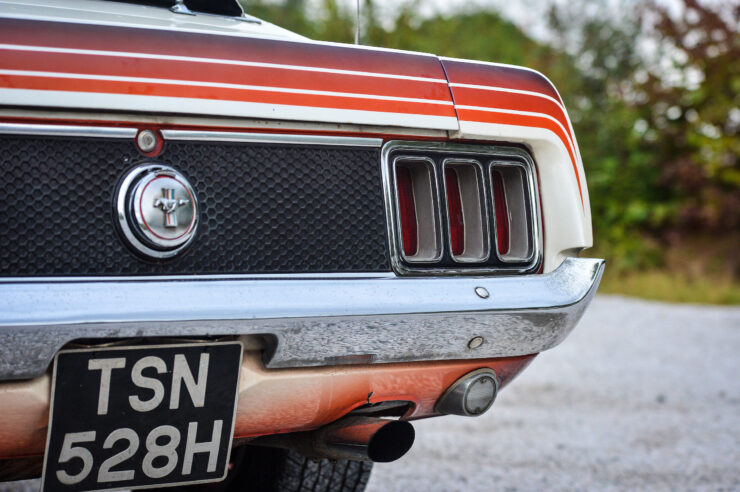 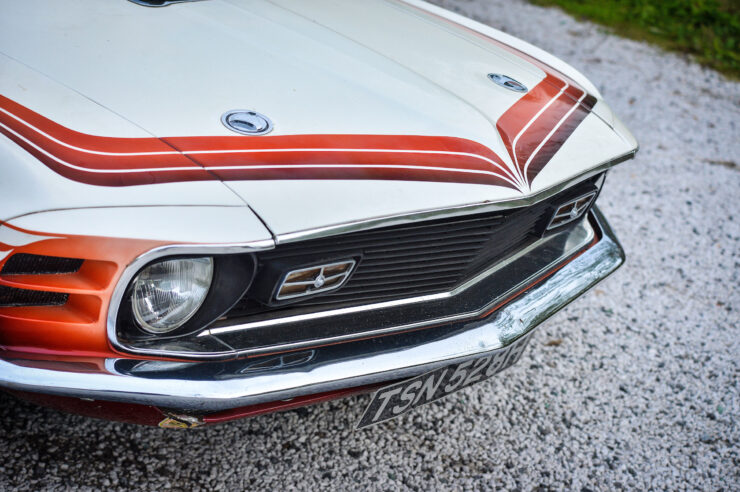 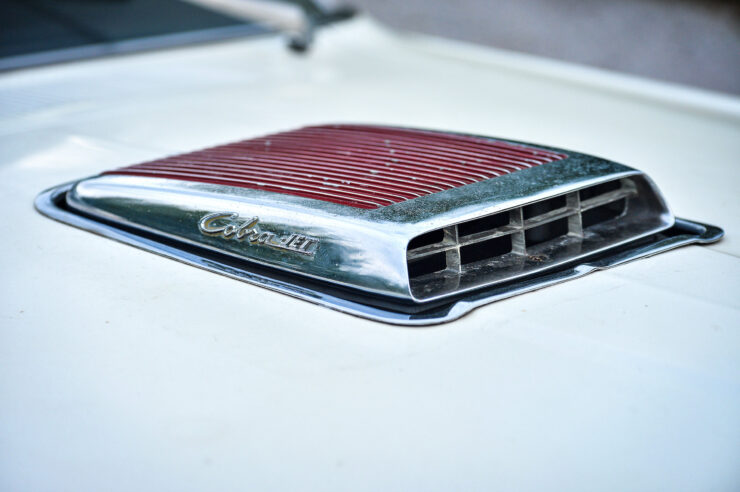 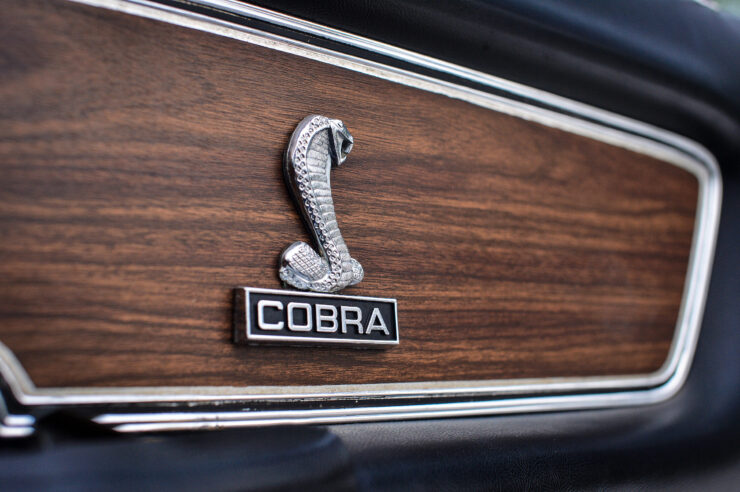 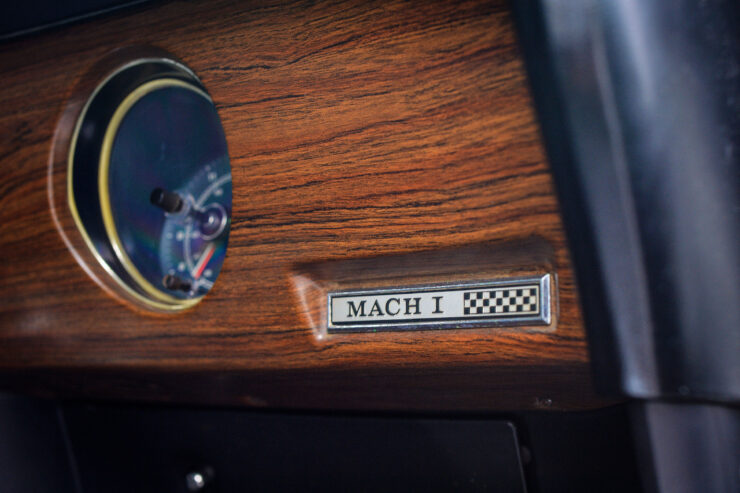 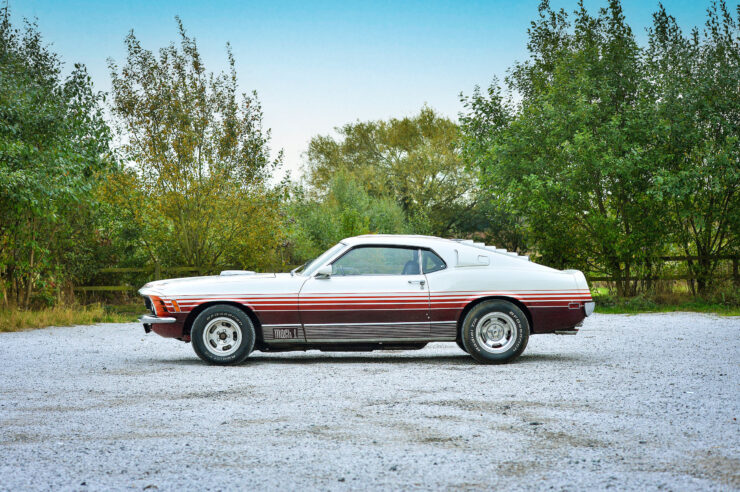 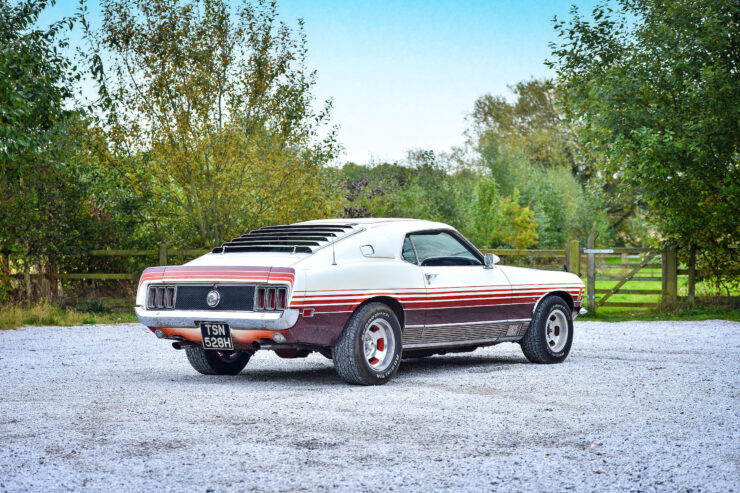 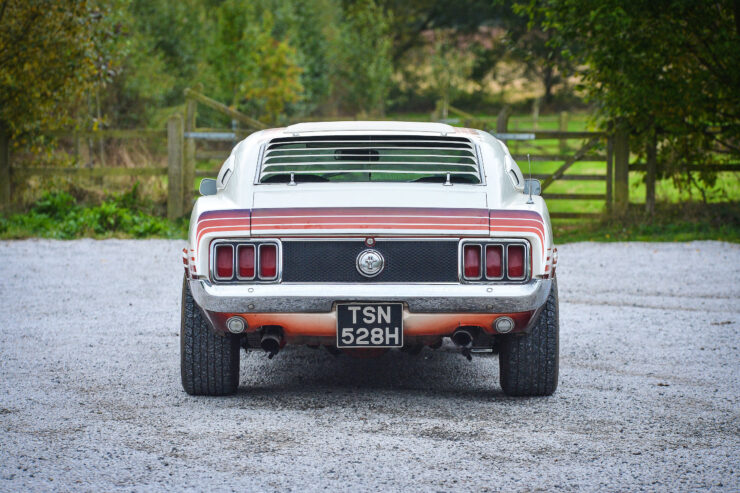