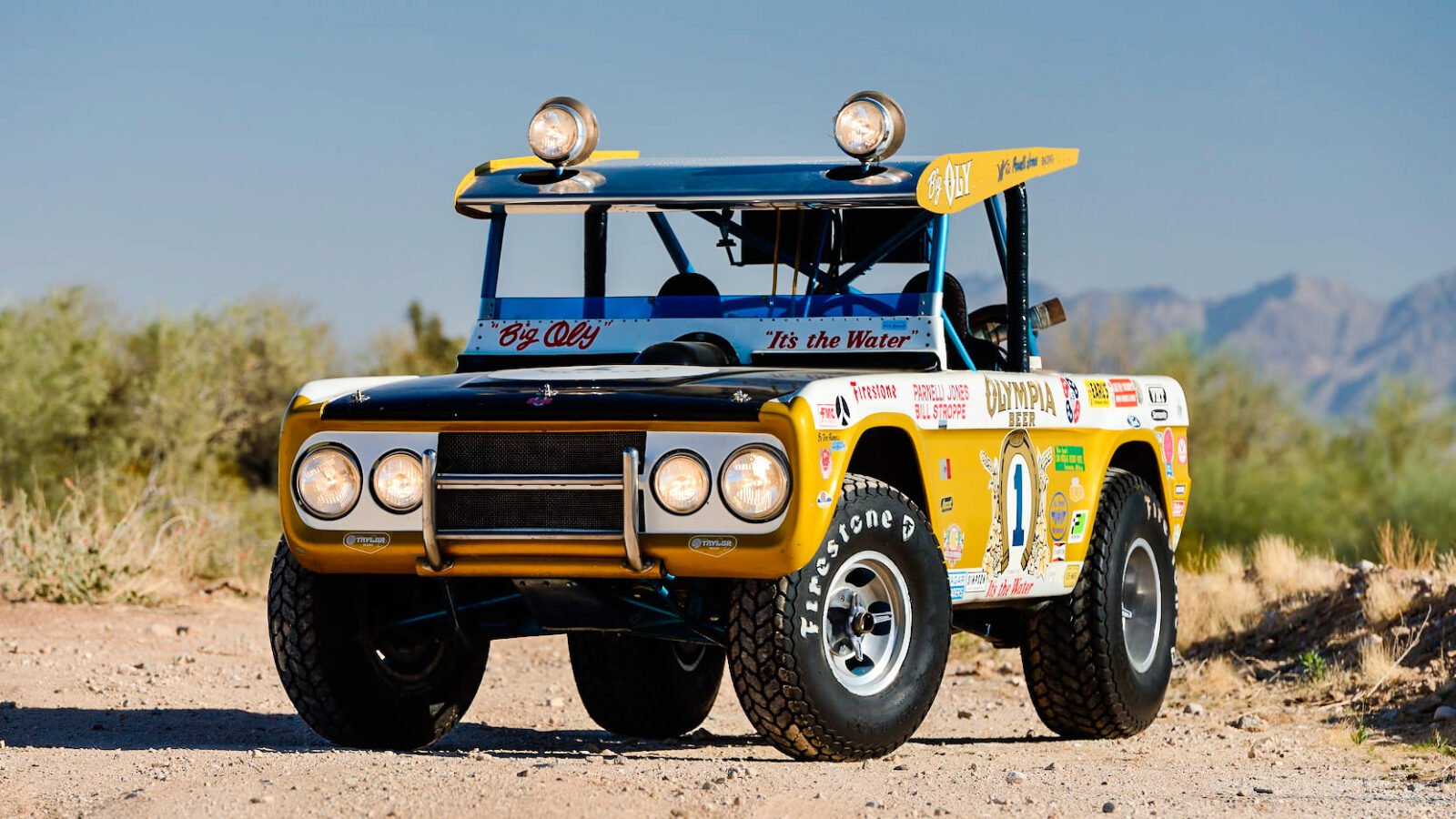 It’s difficult to overstate the importance of “Big Oly” – the Ford Bronco you see here. It’s the vehicle that rewrote the rule book for off-road racing in the early 1970s, going on to dominate races like the Baja 1000, the Baja 500, and the Mint 400.

Today the concept of “silhouette” off-road racing trucks is well established, but back in the late 1960s when Big Oly was designed and built it was a pioneering concept. The Bronco’s unusual name came from the team’s lead sponsor – Olympia Beer.

Rather than using the stock body-on-chassis Bronco as the starting point for their racing truck, Parnelli Jones, Dick Russell, and Bill Stroppe developed an all new chromoly space frame chassis, onto which fiberglass and aluminum body panels was attached to make the vehicle look like a Bronco.

Parnelli Jones and Bill Stroppe already had a long history of working together by the time Big Oly was unveiled in 1970. Jones was already one of America’s most successful and versatile racing drivers, he won the Pikes Peak International Hill Climb, and over the course of his career he would win the Indianapolis 500 twice as a driver and twice as a team owner.

There would be countless other race and championship wins over the course of his career, on dirt tracks, asphalt, and in off-road desert races.

Above Image: A look at the spaceframe chassis of Big Oly showing the suspension and engine placement.

Jones would work with Bill Stroppe on and off throughout the 1960s and 1970s, the two men became firm friends. Stroppe built a Mercury Marauder USAC stock car for Jones, who used it to win the 1963 Pikes Peak International Hill Climb breaking the stock car speed record in the process.

As the story goes, Jones had little interest in desert racing but Stroppe knew he’d be a natural so he hatched a plan to get Jones into a Bronco.

He suggested it to Jones at a Christmas party in 1967, making a point of doing it in front of a large crowd. Jones explained that he wasn’t interested, Stroppe said something about off-road racing being too hard for him, which fired up Jones’ competitive spirit and saw him agree to race in the Star Dust 7/11 race across the Nevada desert in 1968.

The Jones/Stroppe partnership would go on to revolutionize off-road racing. They brought in everything they knew about building race cars to the world of off-road racing trucks and changed it forever.

After some patchy successes driving modified production trucks in the late 1960s Jones and Stroppe head mechanic Dick Russell began developing the design of the vehicle that would become Big Oly in secret away from Stroppe’s disapproving eye.

Above Image: Hear about Parnelli Jones’ exploits in Big Oly in his own words.

When Stroppe did finally learn about the project he was furious, but Jones talked him down and Stroppe insisted that the project move into his workshop after realizing how much of a game changer it could be.

With its long travel coil spring suspension, disc brakes front and rear, full space frame chassis, and its 390 bhp Ford 351 cu. in. V8, Big Oly was a force to be reckoned with. Unfortunately during its first attempt at the Baja 1000 Big Oly broke an axle, Jones later admitted he was pushing too hard for the conditions in the hope of beating the motorcycles.

For the first time Big Oly is due to come up for public sale, it’s spent the past few decades in Vel’s Parnelli Jones race shop and being displayed at some of the most important museums and car shows in the United States.

It will be crossing the auction block with Mecum this May, fittingly in Indianapolis of all places. If you’d like to read more about it or register to bid you can click here to visit the listing. 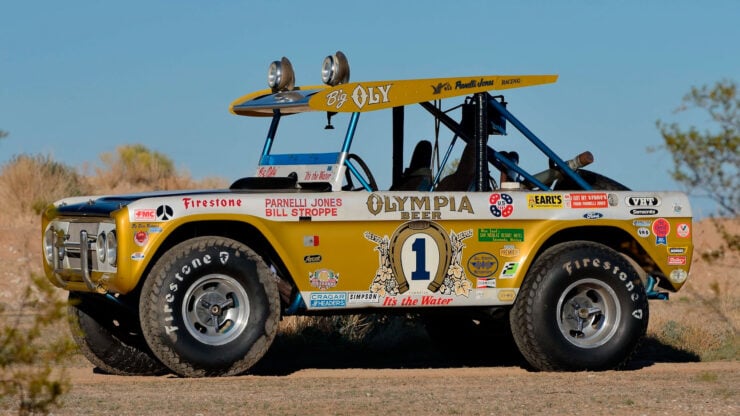 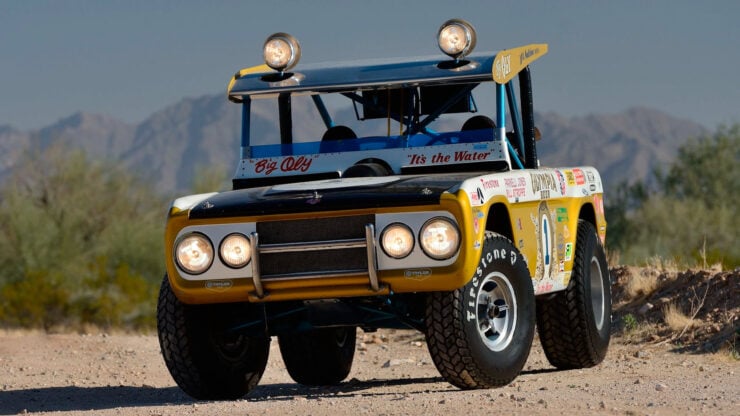 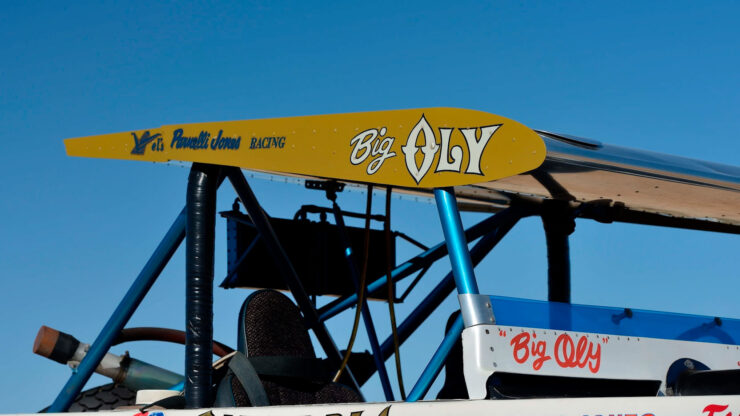 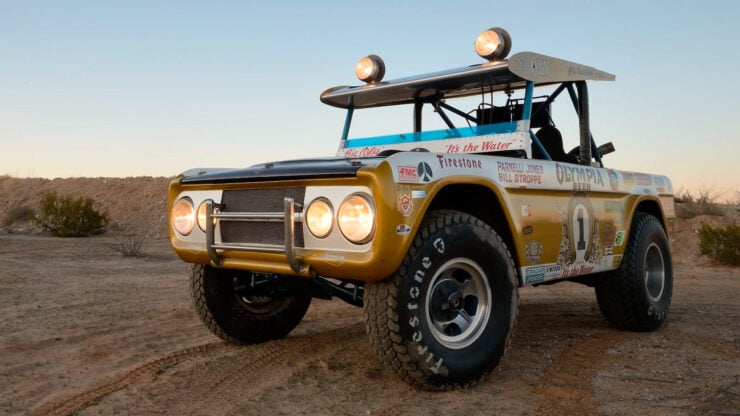 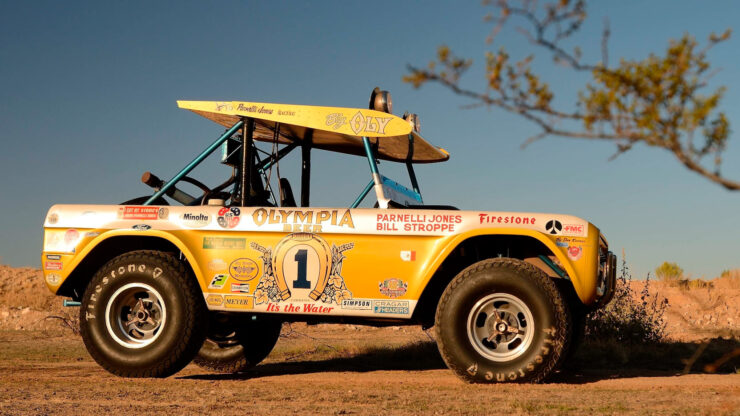 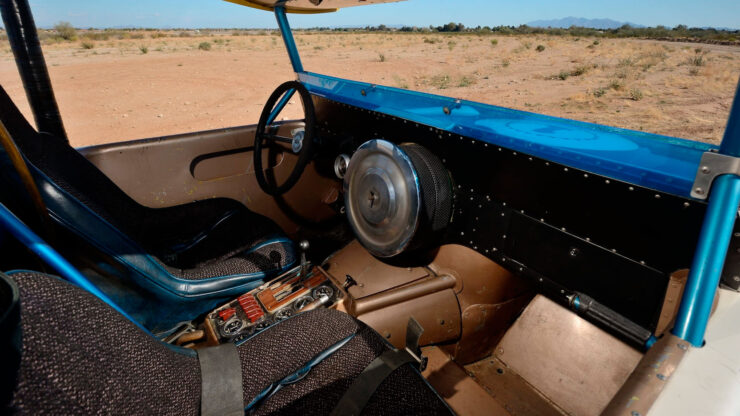 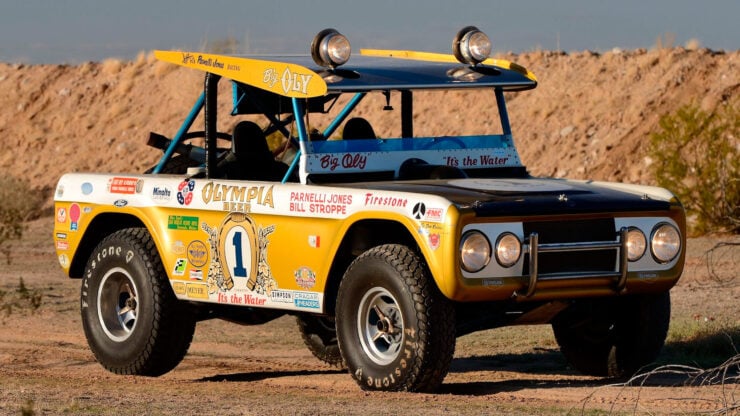 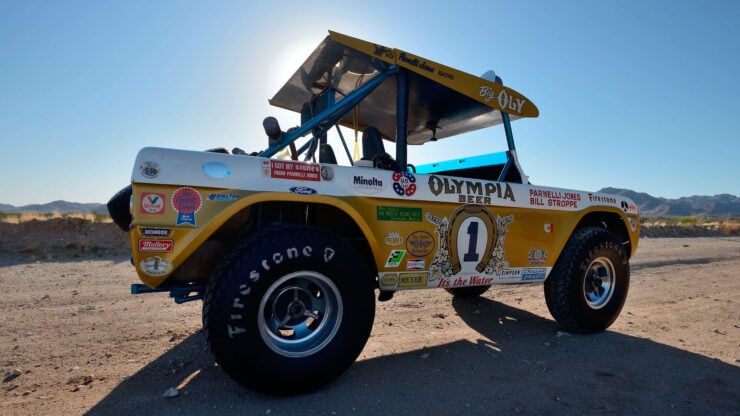 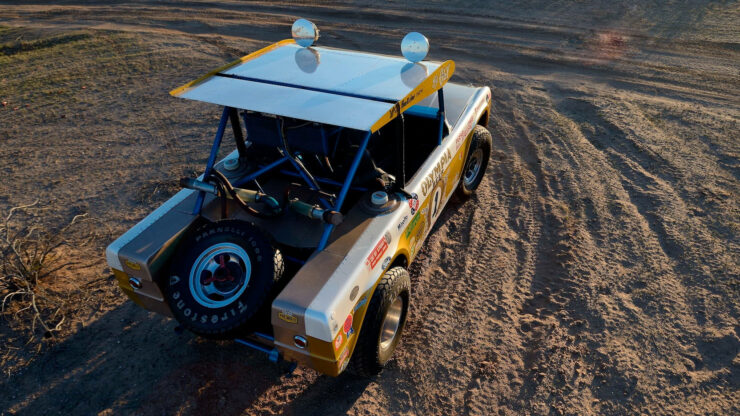 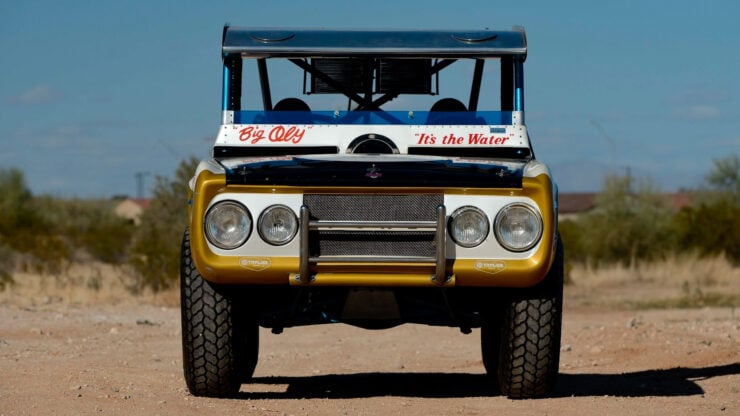 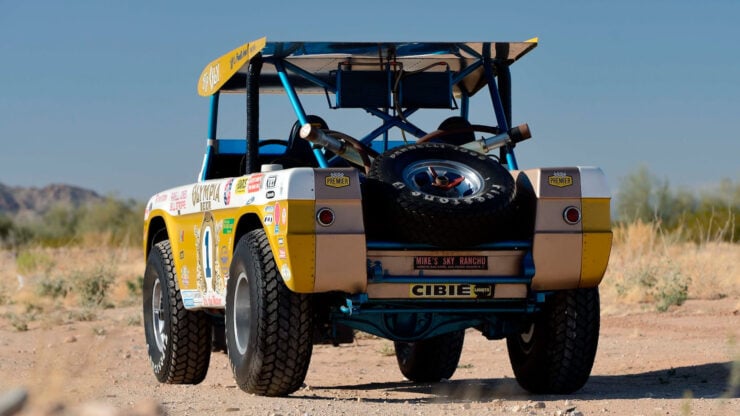 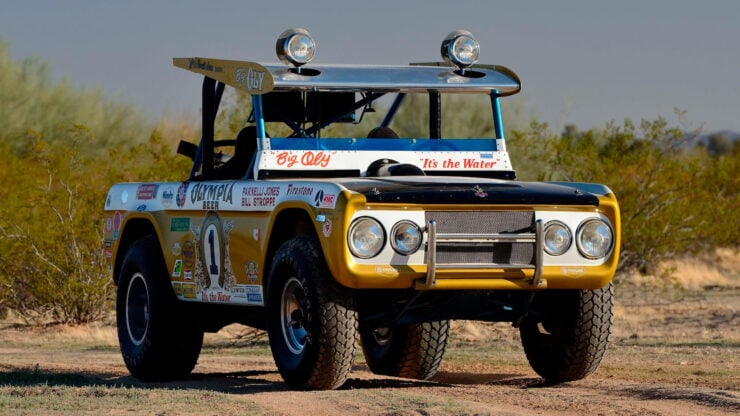 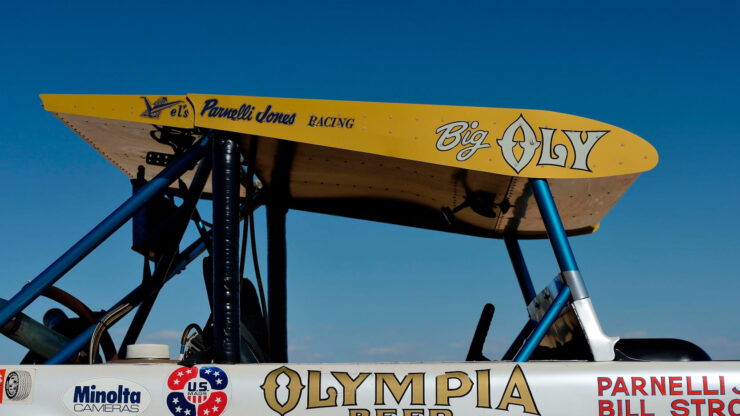 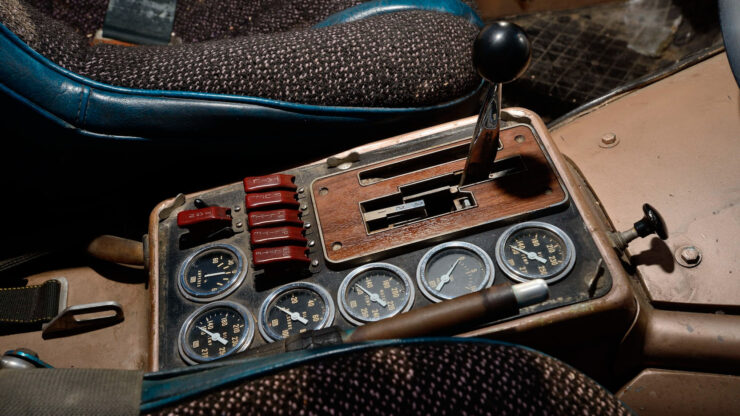 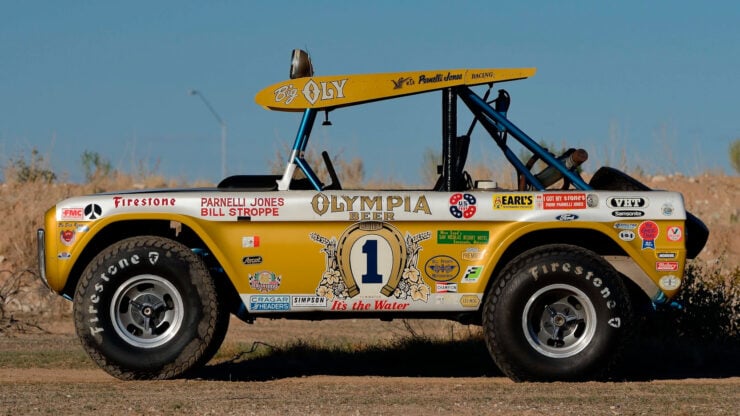 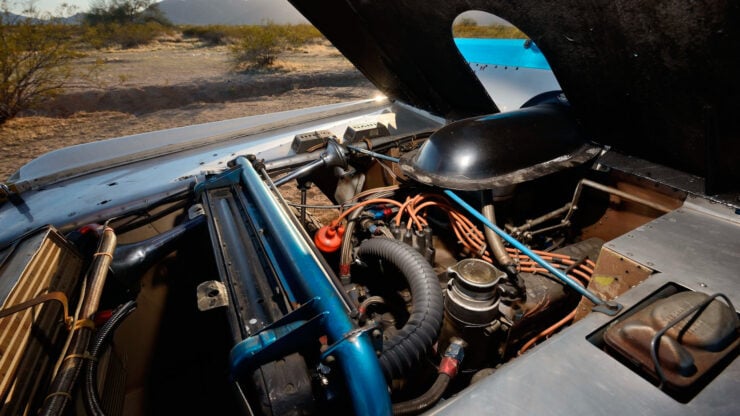 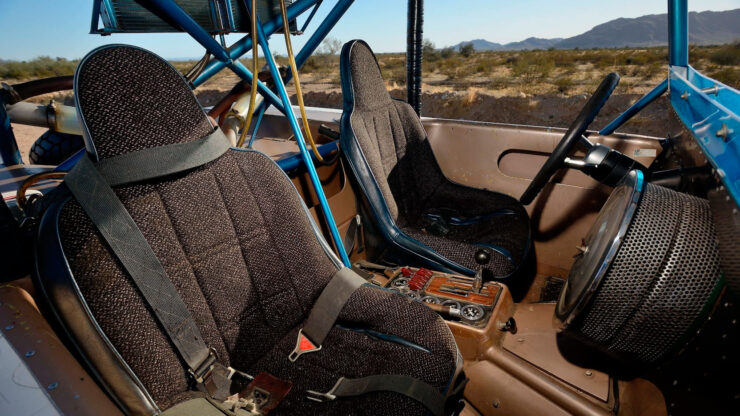 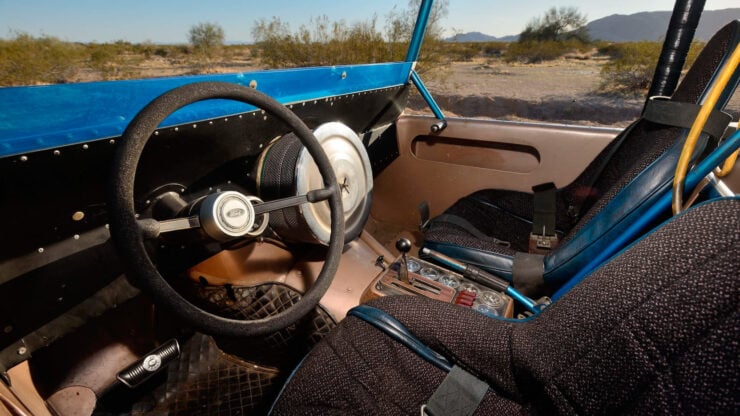 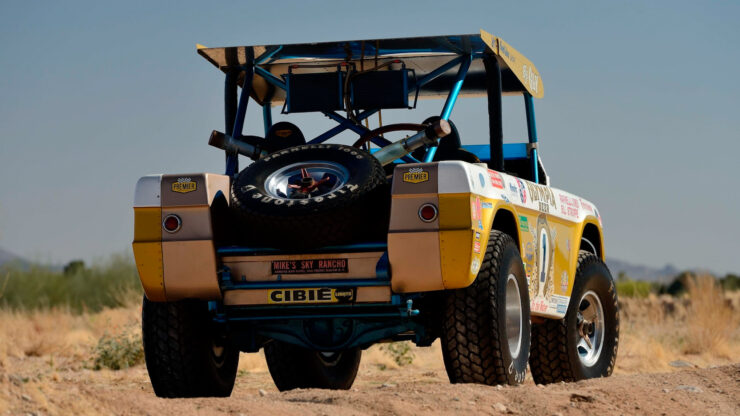 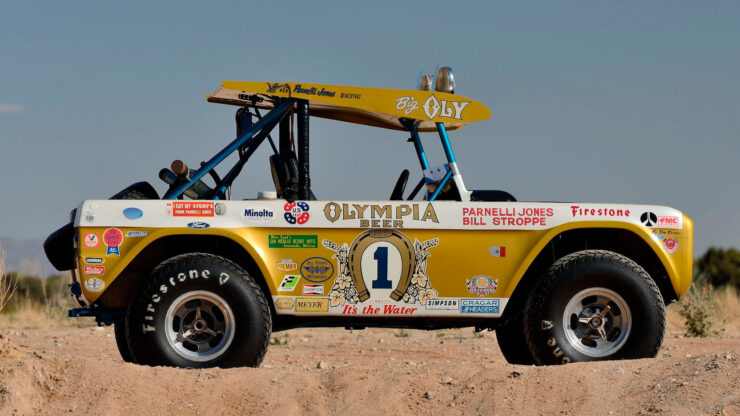 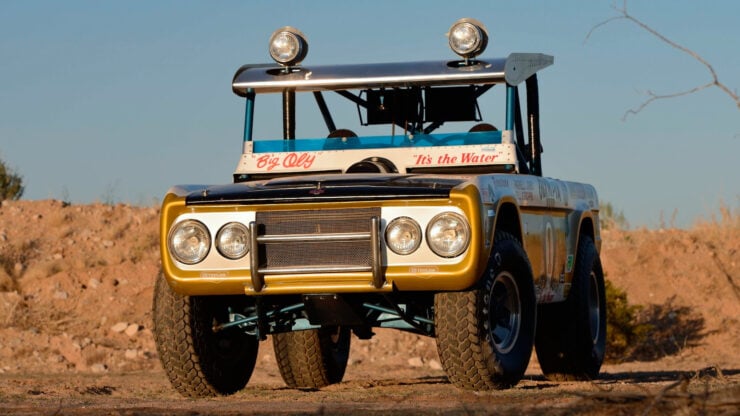 This is a rare Saab 96 Monte Carlo 850, it was built by the Swedish automaker to commemorate the victories of rally driver Erik Carlsson in…

When the Dodge Hellephant crate engine was first announced at SEMA in 2018 it took the automotive world by storm. For the first time ever…

The Gullinbursti Kevlar Original Zip-Up Hoodie is designed to provide an additional layer of protection for motorcyclists and anyone else who wants full Kevlar coverage….

The Kaiser Darrin is an unusual American car that is considerably less famous than it deserves to be. The Darrin was the first mass-produced fiberglass-bodied…