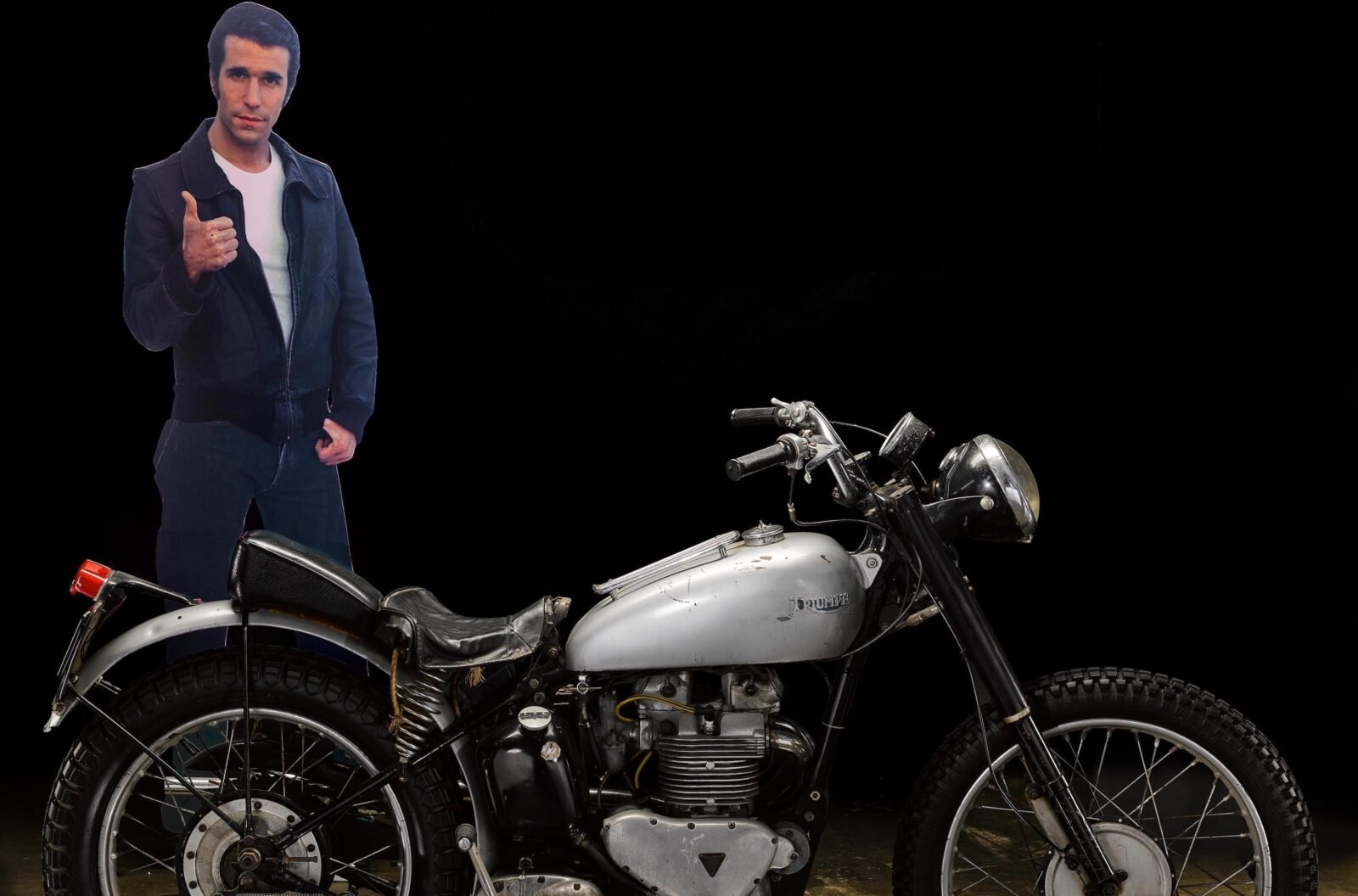 There are few screen-used motorcycles more famous than the Triumph TR5 Trophy owned by Fonzie in the long running television series Happy Days, and now for the first time in over a decade it’s coming up for sale.

Fonzie’s Triumph is instantly recognizable to many viewers of the series thanks to its distinctive customizations and the fact that it was a central character and plot point to many episodes. Fonzie would have been considerably less memorable without his black leather jacket, his “greaser” hairstyle, and his motorcycle.

Happy Days And The Fonz

Happy Days is a TV series that very nearly never made it past the pilot stage. Director George Lucas had seen Ron Howard in the pilot, playing Richie Cunningham, and immediately cast him as the lead in his seminal 1973 film American Graffiti. 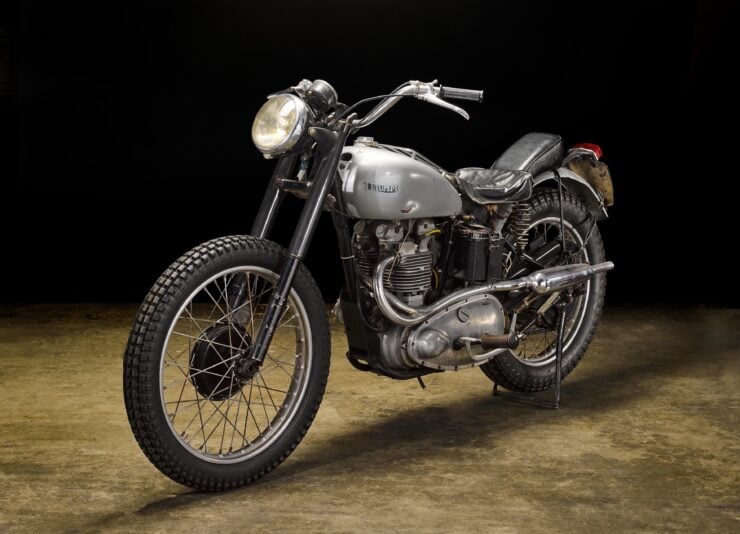 Fonzie’s motorcycle was built by off-road racing legend and Hollywood stuntman Bud Ekins, the man who did the famous motorcycle jump in “The Great Escape” and who drove much of the chase scene in “Bullitt.”

Based on this starring role in such an important film the Happy Days pilot, originally called Love and the Television Set, was revisited by studios and the series received a green light for production. The show would go on to run for 11 seasons and 255 half hour episodes between 1974 and 1984, becoming one of the most popular television series of its time.

Happy Days would later spin off two other series that would become cultural touchstones in their own right – Laverne & Shirley and Mork & Mindy. Happy Days actor Ron Howard would go on to become one of the most successful and critically acclaimed film directors of the modern age.

Alongside Ron Howard’s character Richie Cunningham, the other key character from Happy Days is undoubtably Arthur “Fonzie” Fonzarelli. Fonzie originally had a smaller role when the series first started however he proved popular with viewers and his role was quickly expanded, eventually becoming arguably the most memorable and most quoted character from the series.

Above Video: The series of clips shows Fonzie on his Triumph, and some of the other bikes he briefly used during filming.

The Story Of Fonzie’s Motorcycle

Fonzie became famous for his one-liners, his distinctive hairstyle, his black leather jacket, and his beloved motorcycle: a 1949 Triumph Trophy 500.

In order to ensure that Fonzie’s motorcycle was true to form for a 1950s custom it was specially built for the series by Bud Ekins, a legendary motorcycle racer, Hollywood stuntman, and close friend of Steve McQueen.

Ekins would be the man who did the famous barbed wire border fence jump scene in The Great Escape and he did much of the stunt driving in the film Bullitt.

There can be no doubt that Ekins was one of the greatest motorcycle racers of his generation, he won a gold medal at the 1962 International Six Days Trials in East Germany, he would eventually win a total of four gold medals and a silver in his ISDT career and he was instrumental in helping to establish the sport of desert racing in the United States. 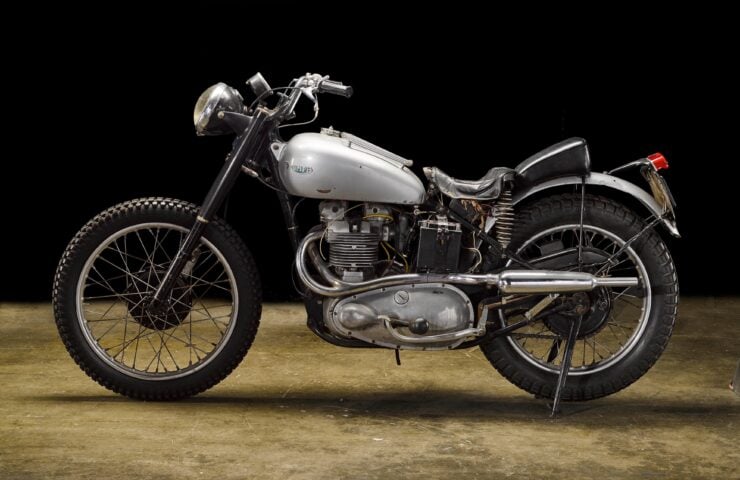 The bike was given “buckhorn” handlebars, a silver painted fuel tank, a modified seat, and the front fender was removed. The purpose was to get it looking like a period correct custom motorcycle from the 1950s.

When he was contracted to provide a motorcycle for the rebellious young Arthur Fonzarelli character in Happy Days Ekins took a look back at the custom motorcycle scene in the United States in the 1950s, when the series had originally been set.

A young high school dropout like Fonzie would almost certainly have been riding something affordable that he had bought secondhand, so a 1949 Triumph TR5 made perfect sense. In all, three bikes were built to identical specification with higher “buckhorn” handlebars, a custom seat, a front fender delete, and a few other modifications to make sure they looked correct for the period.

All three of these motorcycles were used interchangeably during filming, and they remained the property of Bud Ekins who rented them to the production company. Once filming wrapped two of the bikes mysteriously disappeared and have never been seen again, the other bike went missing for years but was eventually tracked down by Cycle World writer, Wendy F. Black.

The last known surviving Fonzie motorcycle is now coming up for sale for the first time in 10 years with Bonhams, they have it listed with a price guide of $80,000 to $120,000 however we could see it go higher than that given the bike’s place in television history. 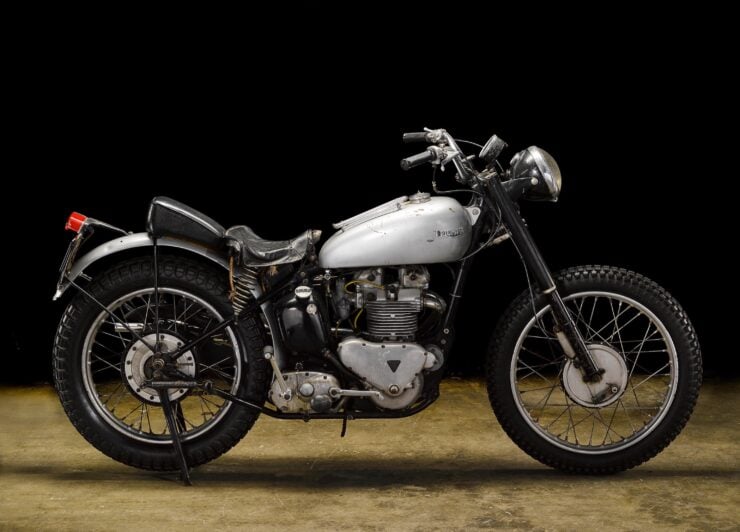 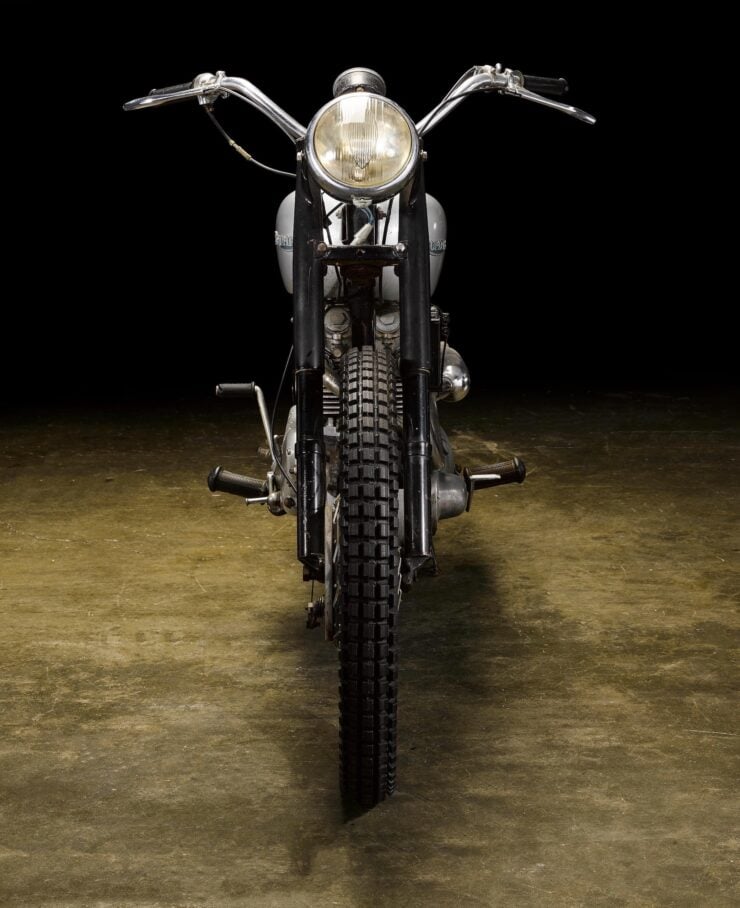 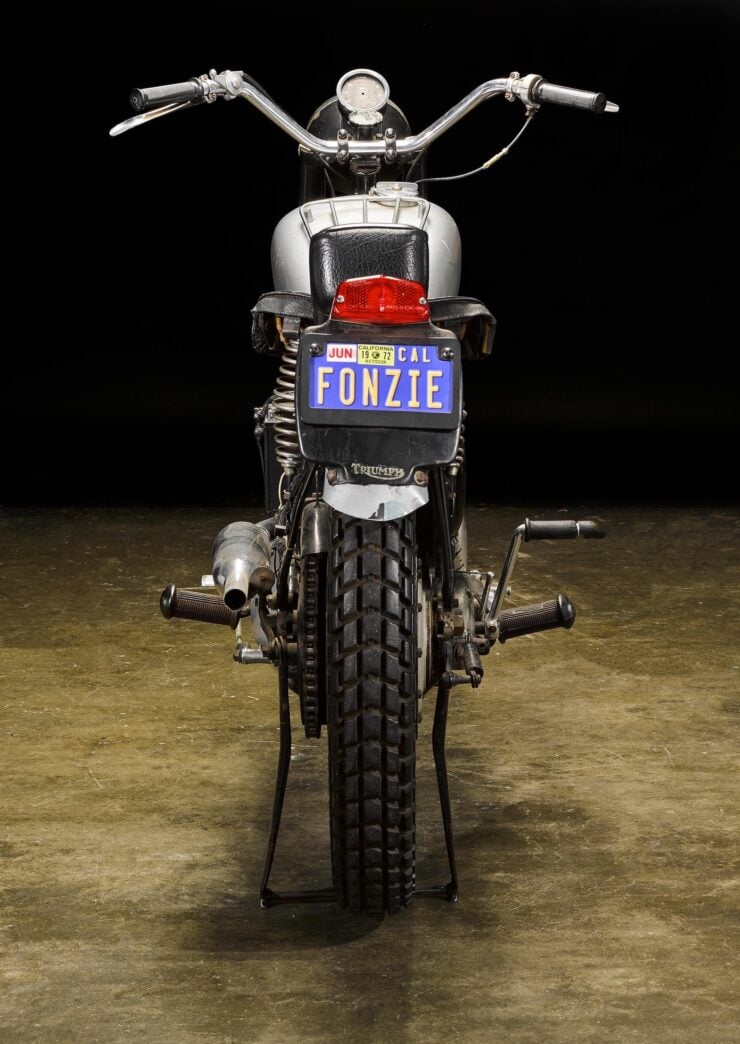 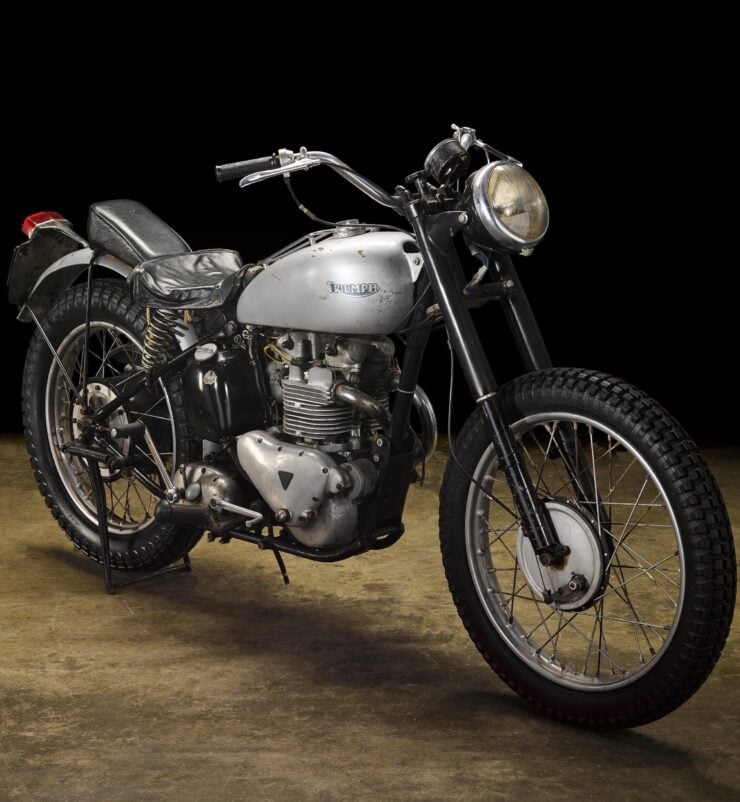