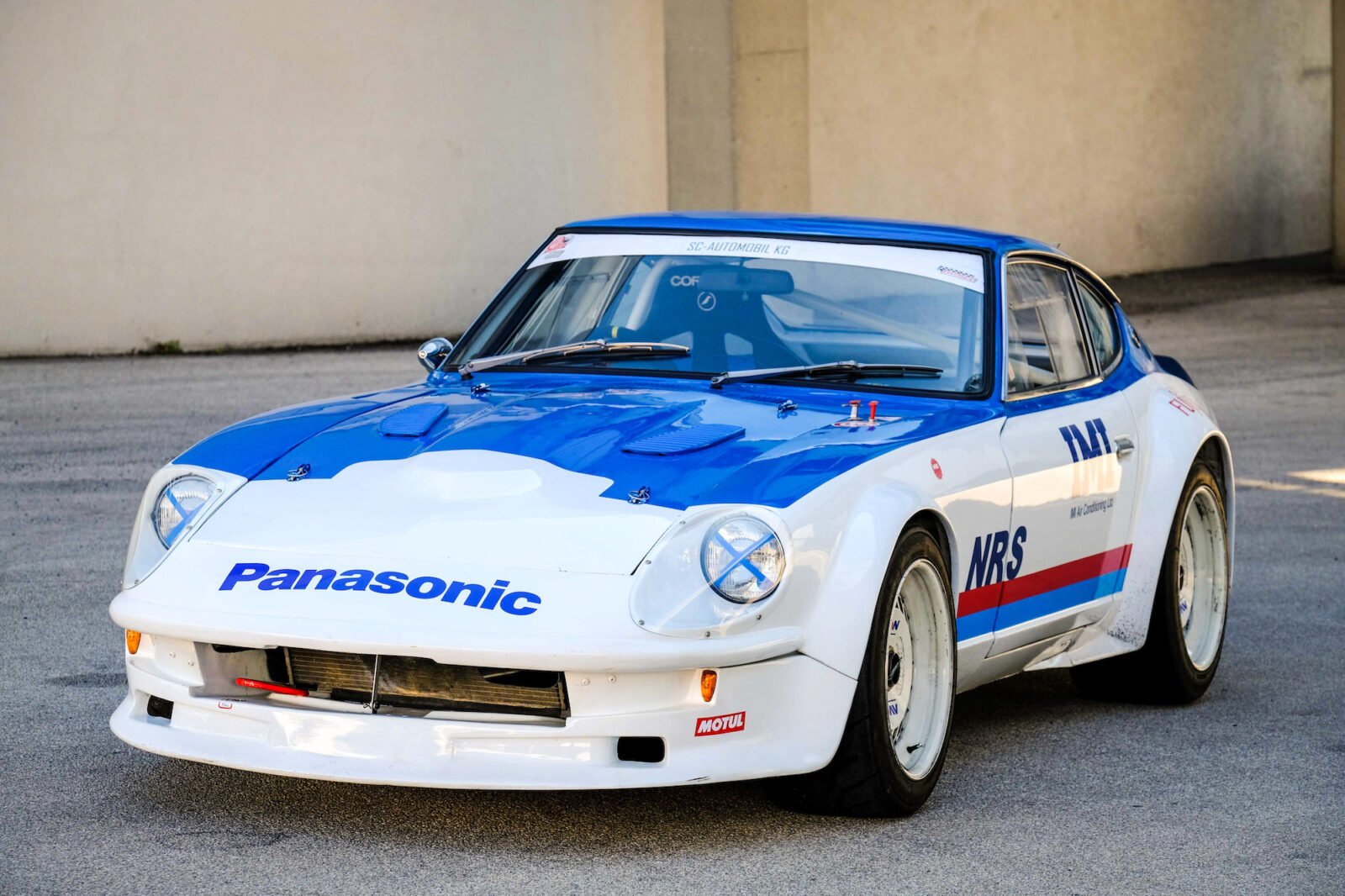 This Datsun 240Z has been completely rebuilt to compete in vintage motorsport events, and thanks to the remarkable racing successes of the 240Z in period competition the car should be eligible to compete in a wide range of events.

Described simply as a 1973 Datsun 240Z Racing, this car was built into a track car in England before being exported to the Netherlands to compete in historic racing. In 2016 the car was completely restored by SC-Automobil KG in Austria, and today it presents in ready to race condition.

✱ The Datsun 240Z is one of the most important Japanese sports cars of all time, and played a significant role in establishing the Japanese as credible builders of world class sports cars.

✱ The 240Z enjoyed a number of major motor racing successes including winning the SCCA C Production national title in 1970 and 1971, a third place in the Monte Carlo Rally in 1972, and a win in the East African Safari Rally in 1973.

✱ With styling that’s been compared to both the Jaguar E-Type and the Porsche 911, the 240Z remains one of the most desirable Japanese sports cars of its era.

Datsun 240Z was critical to establishing Japan as a nation of genuinely competitive sports car builders, alongside other period cars like the Toyota 2000 GT, the Mazda Cosmo, and the Datsun 510 (also known as the Datsun 1600). 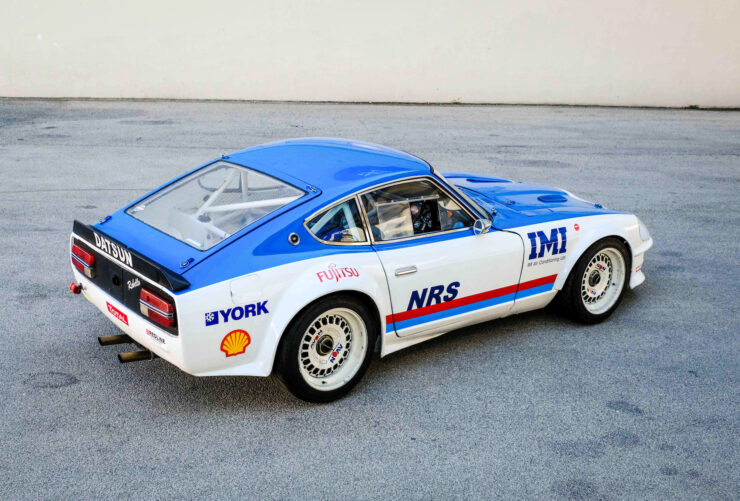 Above Image: This car has a body kit that gives it wider wheel arches for wider wheels and tires, as well as a more aerodynamic nose and a front air dam.

Before this time Japan had been seen by many as a nation that manufactured small, inexpensive cars that offered good reliability and often good fuel economy to boot.

Nissan released the Datsun 240Z in 1969, in various world markets it was also known as the Nissan S30 or the Nissan Fairlady Z.

The car followed a relatively standard formula for a sports car of the era, it has a steel unibody chassis, a front mounted engine feeding power to the rear wheels, two doors, a long hood, and a fastback style roofline.

In the rear the car rides on Chapman struts with lower wishbones, coil springs, and telescopic shock absorbers. Steering is by rack and pinion, and it has disc brakes up front with drums in the back.

As you can see the formula behind the car wasn’t revolutionary in itself, however it mixed all the ingredients together well enough to earn the company over 500,000 sales of the model worldwide while enjoying a significant boost to their reputation.

The car you see here started out as a stock standard 1973 240Z and spent much of its life this way, in more recent years it was rebuilt for vintage racing. 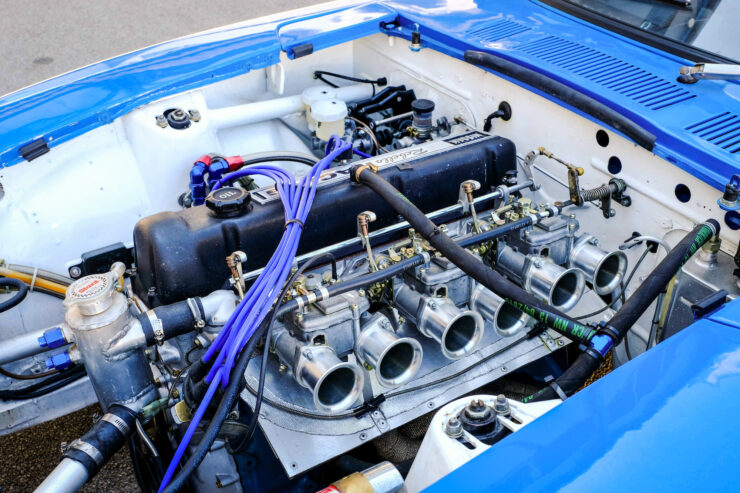 Above Image: The original 2.4 liter engine has been replaced with a 2.8 liter unit from a Datsun 280Z, producing 280 hp.

As mentioned in the introduction above, the car was sent to the Netherlands to race in historic events and was later restored to the condition you see in the images by SC-Automobil KG in Austria.

The car’s current specification list is impressive, it includes a newly rebuilt 2.8 liter engine from the Datsun 280Z, now with triple Mikuni 48 carburetors and a racing exhaust, capable of 280 hp. It’s clear that the engine must have had a lot of internal work done to achieve that power output however the listing doesn’t go into detail.

Power is sent through a twin-disc sintered clutch and a 5-speed gearbox into a a limited-slip differential with cooling. It has adjustable front and rear suspension, Wilwood disc brakes on all four corners, Ronal magnesium wheels, and a 60 liter racing fuel cell.

The car is fitted with an aerodynamic body kit that features a longer nose, flared wheel arches, a deep front lip spoiler and a small rear spoiler. It’s listed as being ready to race following service checks with a price guide of €40,000 – €60,000 which works out to approximately $47,200 – $70,800 USD.

If you’d like to read more about this 240Z or register to bid you can click here to visit the listing on Artcurial. 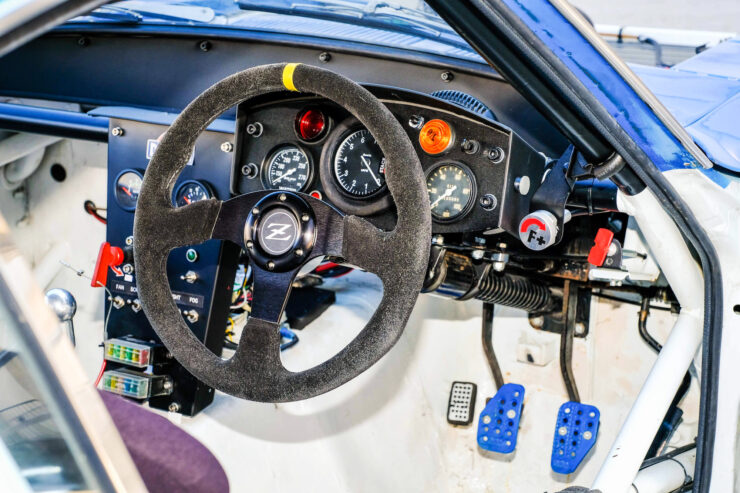 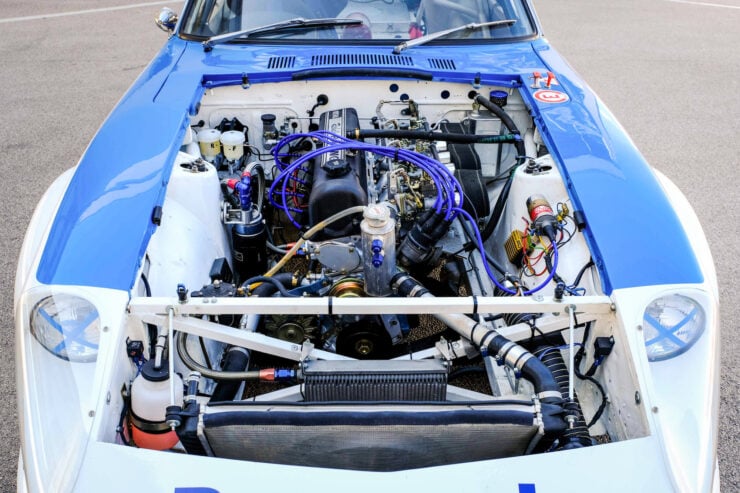 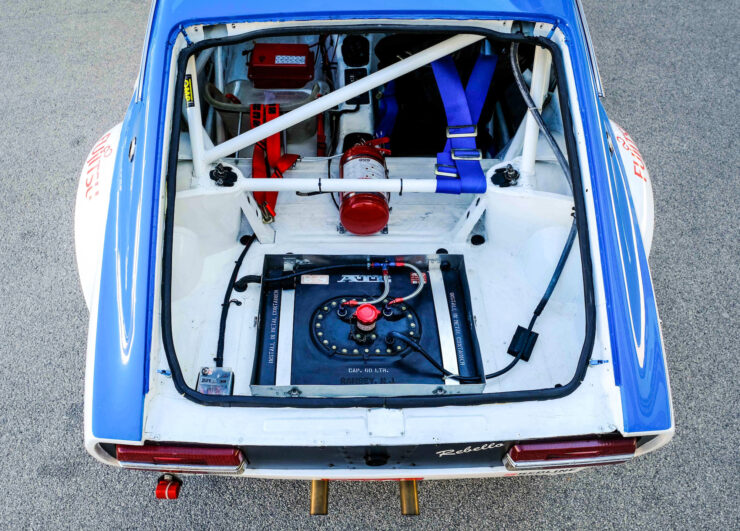 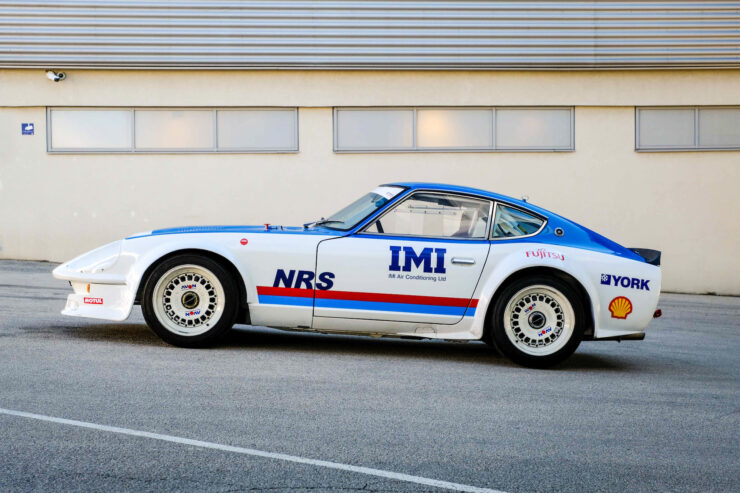 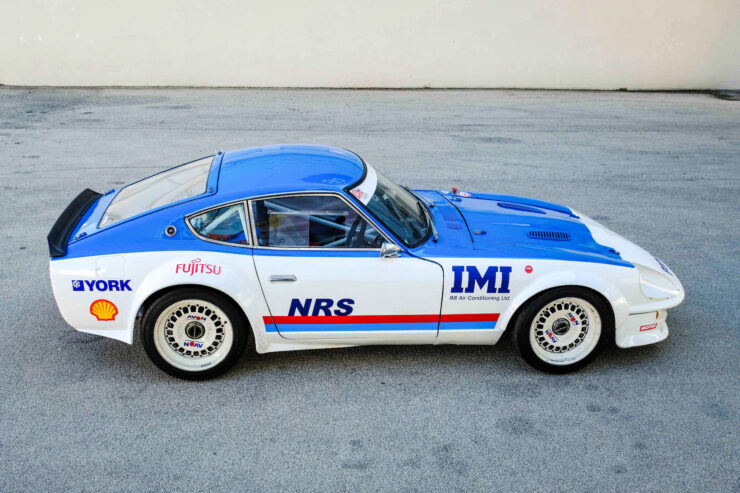 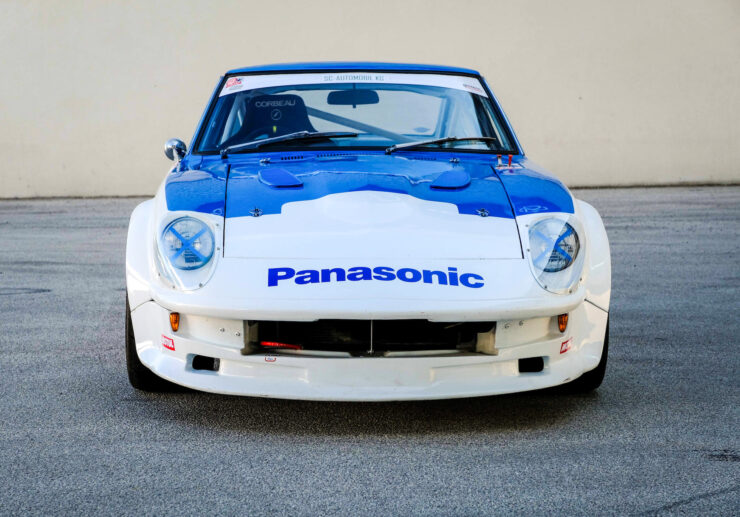 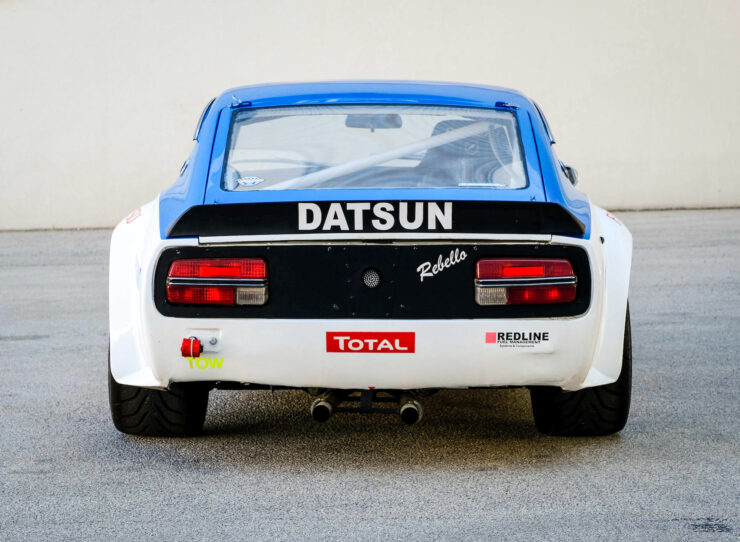 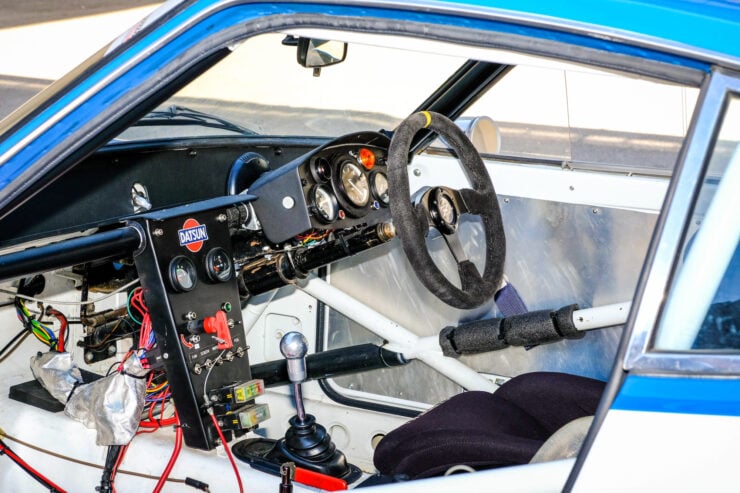 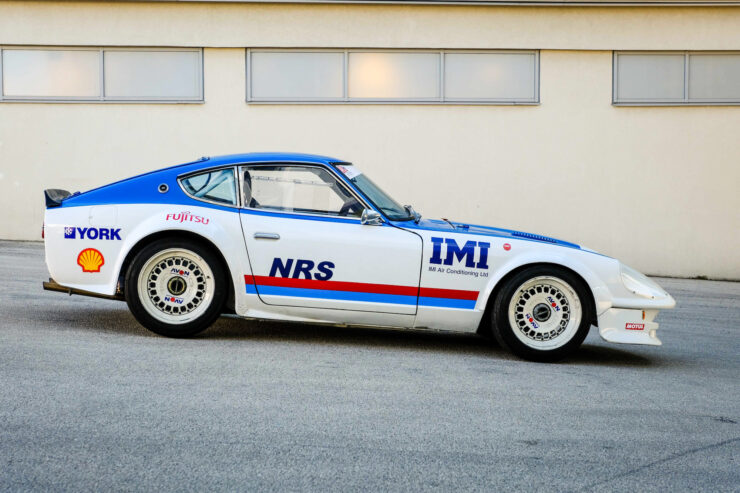 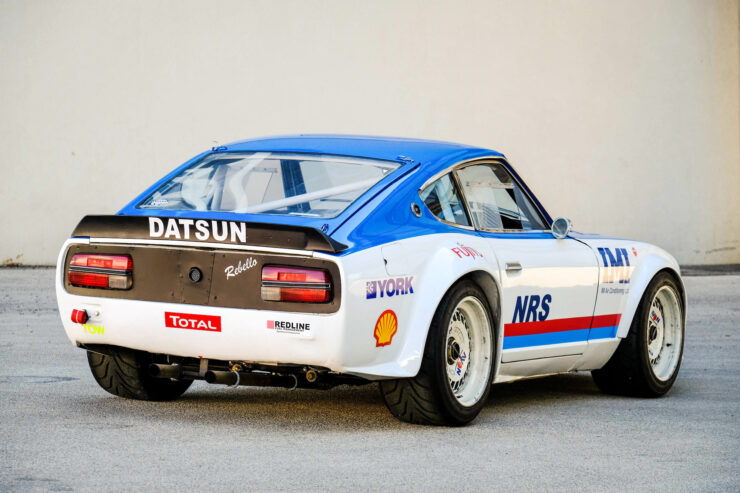 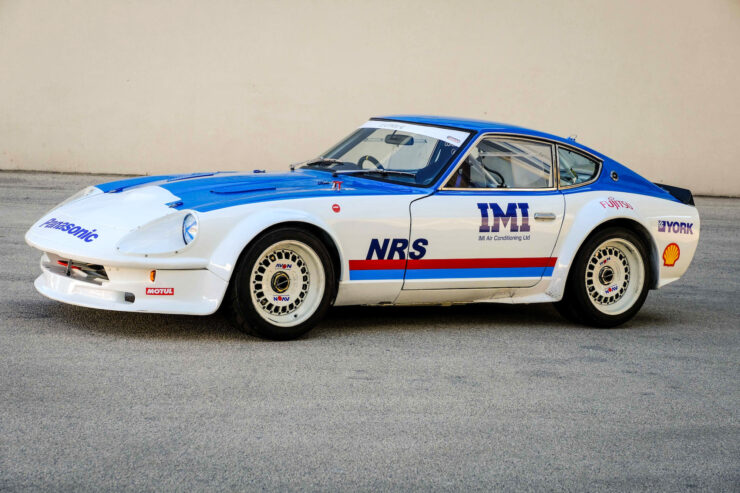