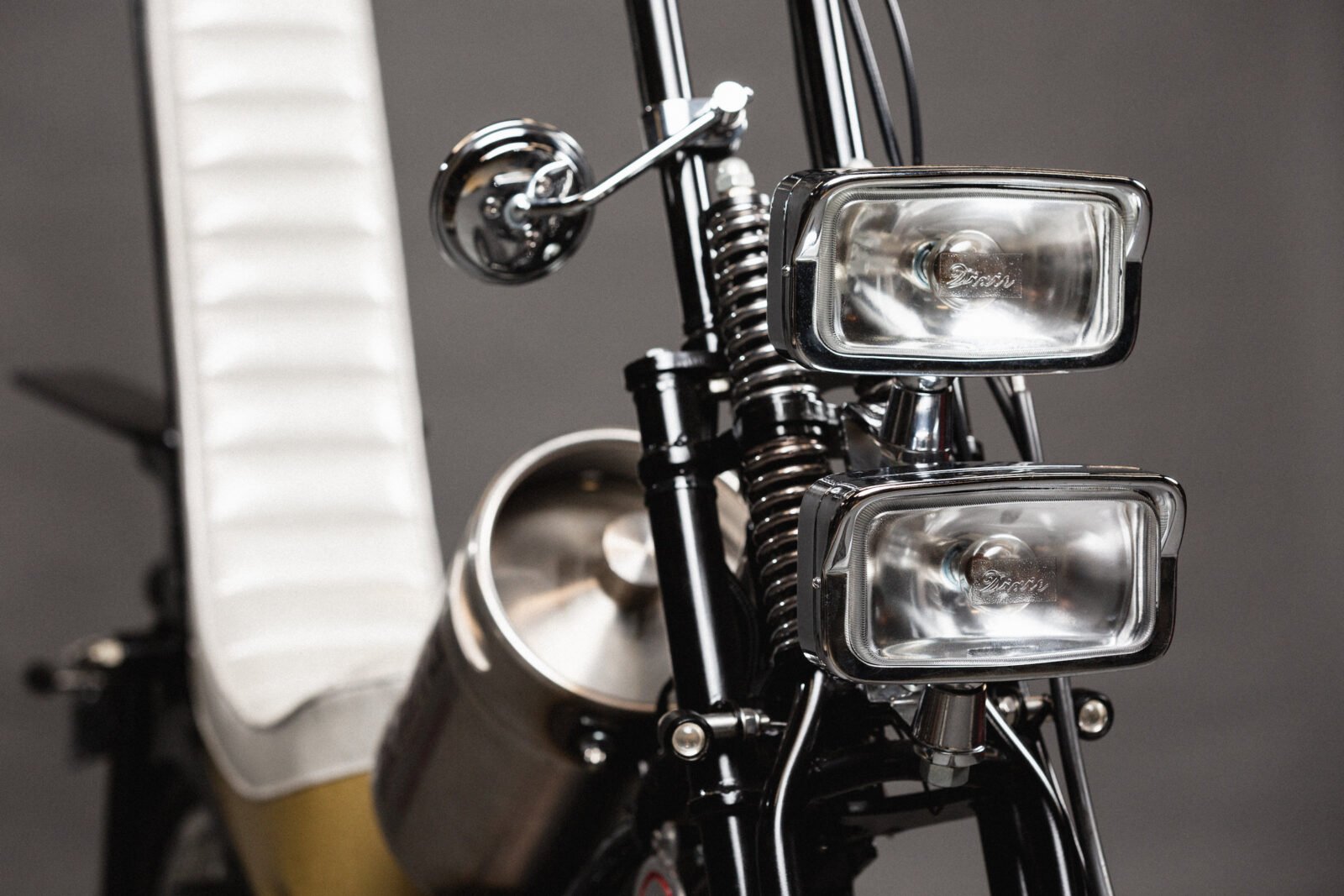 The Postie Bike is an Australian institution, they’re a lightly modified version of the Honda CT110 specifically built for Australia Post – an Australian government institution famous for its ability to find new and creative ways to not deliver your mail.

This custom Postie Bike chopper was built as a collaborative effort between the Rising Sun Workshop and Young Henrys, two iconic Sydney establishments that are very high on the must see list for visitors to the harbour city who have a soft spot for motorcycles, or beer, or motorcycles and beer. 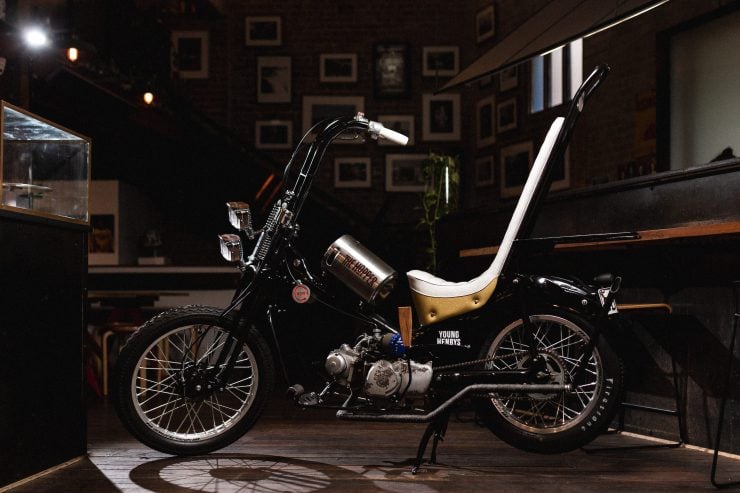 The Rising Sun Workshop is a motorcycle workshop and award winning restaurant, with elements of both a bar and a cafe thrown in for good measure. Anyone can go visit for coffee, tea, beer, lunch or dinner. Locals can sign up and become members, allowing them to bring their motorcycle in and work on it using one of four hydraulics lifts, with fully appointed tool kits and workshop equipment.

Perhaps most importantly there’s also a resident master motorcycle mechanic on site named Brad Coles, who provides advice, guidance, and assistance to people who have limited experience working on engines. Brad is known for having the skill and patience levels of a Shaolin monk and he’s a talented off-road rider to boot. 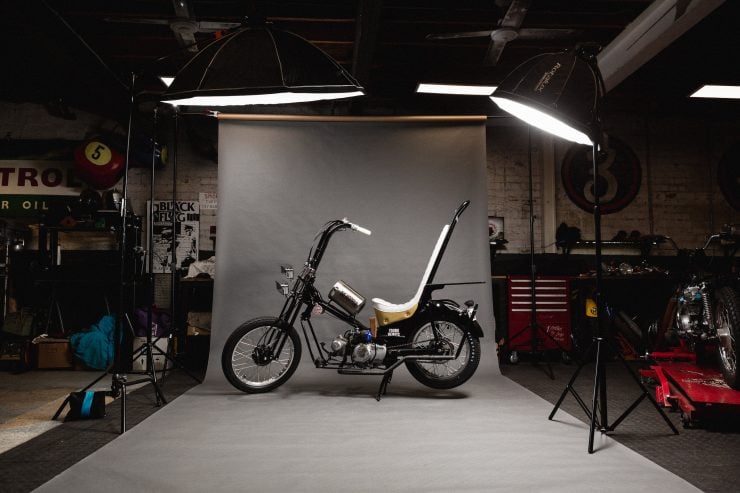 We’ve featured the work of Young Henrys on Silodrome previously, they’re a rapidly growing craft brewery in Sydney located just down the road from the Rising Sun Workshop in Newtown, not far south of the CBD. The brewery has been going from strength to strength since it was founded in 2012 by Richard Adamson and Oscar McMahon.

The team are known for their frequent releases of limited edition batches, and for their welcoming bar that operates right out of the brewery inside an old warehouse. One of these limited edition batches was called Motorcycle Oil after its rich dark color, and another was “Foo Town” lager, a special beer created in collaboration with the Foo Fighters to celebrate their ninth studio album and their “Concrete and Gold” tour down under. 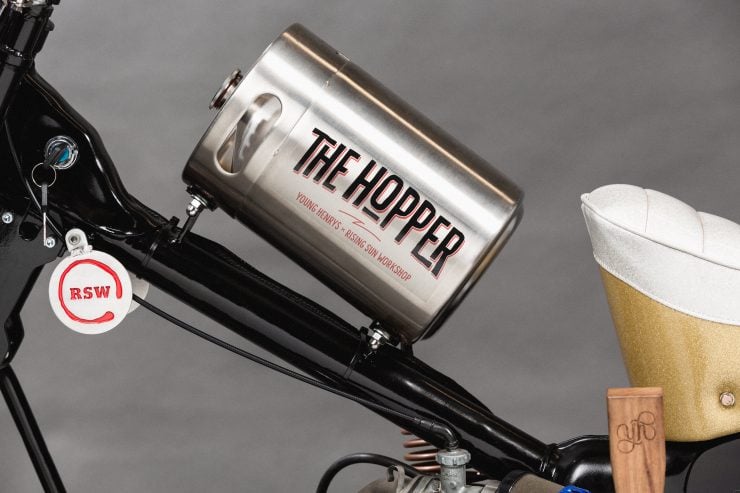 The familiar purr of the Postie Bike is immediately familiar to all Australians, it usually means the junk mail has arrived. Thousands of retired Postie Bikes have now been sold into private hands and they’re proven popular as cheap daily transport.

This Postie is unlike any other, it’s the result of a months long project at Rising Sun Workshop involving dozens of workshop regulars and staff, all captained by resident wrench Brad.

The primary goal was to turn the Postie into an eye-catching and entirely unique custom motorcycle that could be displayed at music festivals, be put into liquor stores, bars, and pubs that stock Young Henrys beer, and most importantly, the bike had to function as a draught beer dispenser including a tap, hoses, and cooling. You just park the bike next to a keg, hook it up, and you’ve got ice cold draught beer on tap.

Fitting all that equipment onto a CT110 with its 87 kilogram (192 pound) kerb weight was always going to be a challenge, the choice to make the bike into an Easy Rider-inspired chopper made it more challenging still. 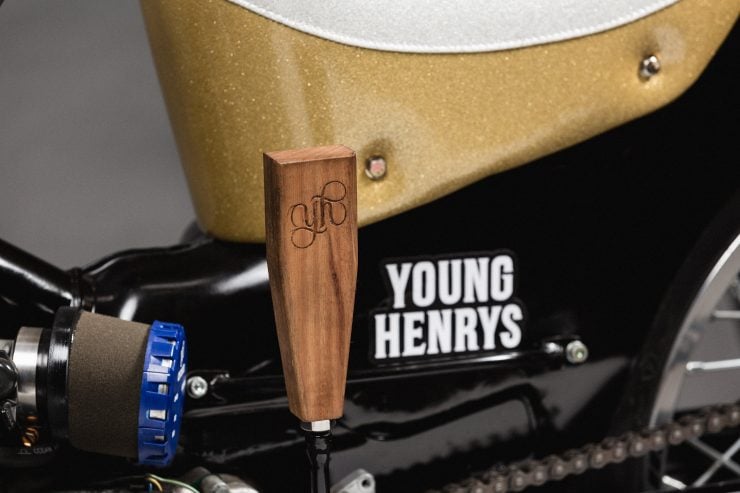 At this point I’m going to turn it over to Brad to explain the fabrication-intensive build in his own words:

We had a meeting at RSW, threw out some ideas on what we wanted it to look like, and took a lot of influences from the 70’s Easy Rider chopper scene. The bike had to have the ability to pour beer from it somehow. It had to be a rideable and registed bike, and had to be over the top.

From that meeting, I drew up a sketch of the bike, and then it was all built from that original sketch.

The fabrication work was quite involved, from the hand bent sissy bar, and forklift tines that would allow the fitment of a custom made mini pallet that allowed a “magic box” to be mounted. The magic box is a special esky (an Australian beer cooler) that allows the beer to be chilled down through the lines as it comes from the keg.

A springer front end was fitted to the bike, and lengthened 150mm. We fitted different wheels to the original hubs, and went with a 19” front, and 16” rear. With the front end and wheels changed, we now needed the frame stretched, so that also got 150mm length added into it. We made up special jigs to allow the frame and front end to be welded back together and remain straight and true. All of that work has been reinforced correctly to maintain structural integrity of the bike. 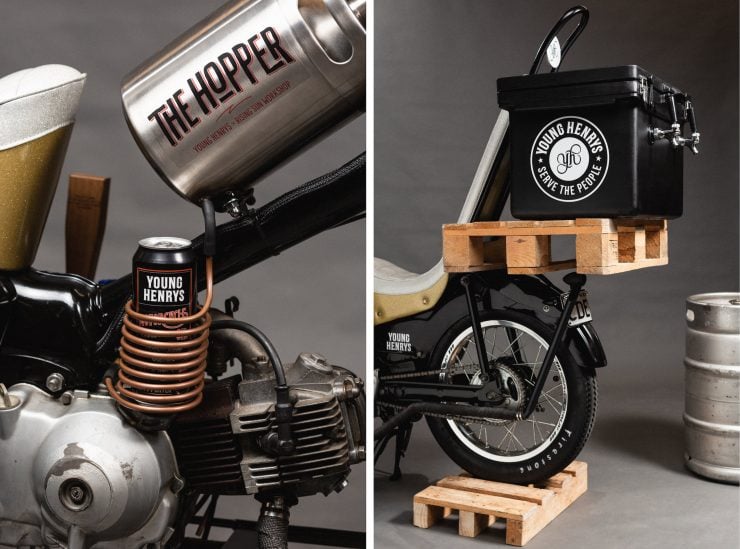 We hand-bent and welded up the very narrow handlebars, as well as fitted a 5 litre mini keg onto the backbone to supply the fuel to the bike, that runs through a hand bent copper line, that resembles a line on a still. It also conveniently holds a beer can, for display purposes only of course.

The seat pan was made from alloy, hand bent, shaped and welded up, then had it custom trimmed in 70’s metal flake vinyl. The gold and white colours of the seat are meant to resemble the colour of a beer, and beer head. Naturally we also had to get custom length cables made to fit.

We used the original lower frame support, but modified it to fit the new frame length with some custom detail pieces, like the spanner shape that connects the frame to the support. It now has forward control foot pegs, with a custom-made brake linkage fitted. Being a centrifugal clutch meant we could also make a hand shifter, that incorporates the old brewery tasting bar counter top beer tap handle.

The bike also has a custom exhaust with a 70’s style kick up at the back.

We had some alloy plates cut and machined for branding, as well as allowing the beer decal to be placed when being used at events. We also fitted a set of twin rectangle “Dixie” headlights that came out of Japan. Purpose Built Moto blinkers, and a mini speedo. Almost everything else is the original equipment like footpegs, controls etc, or been custom made for the bike.

The biggest challenge on this build was time. We had members help on the build, and that was always going to be the case, but like everyone, life gets in the way, so building a custom bike takes a back seat. We had many delays with the bike, like motorcycle accidents, deadlines shifting, running a workshop, overseas holidays and as the collaboration was always about building an amazing bike on a small budget, the labor or build hours would just be put in whenever possible. It did mean a bunch of 16 hour days, but the end result speaks for itself.

I don’t know how many hours went into the build, but it is safe to say between everyone involved, with everything around the build, including filming social media short videos etc we would have hundreds and hundreds of hours in it. 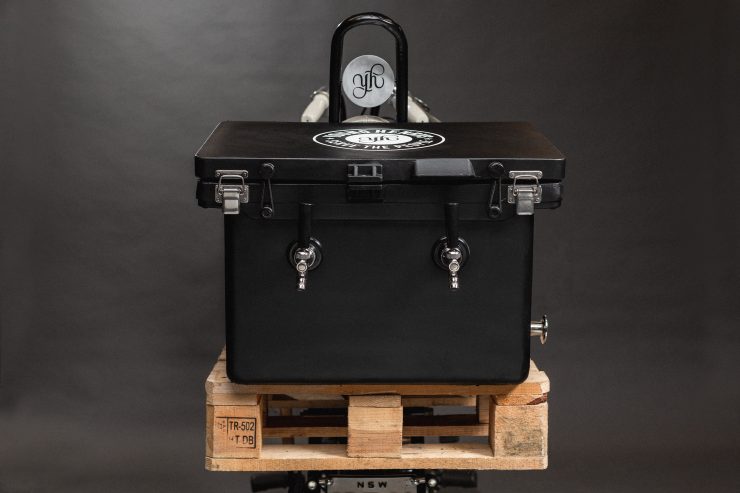 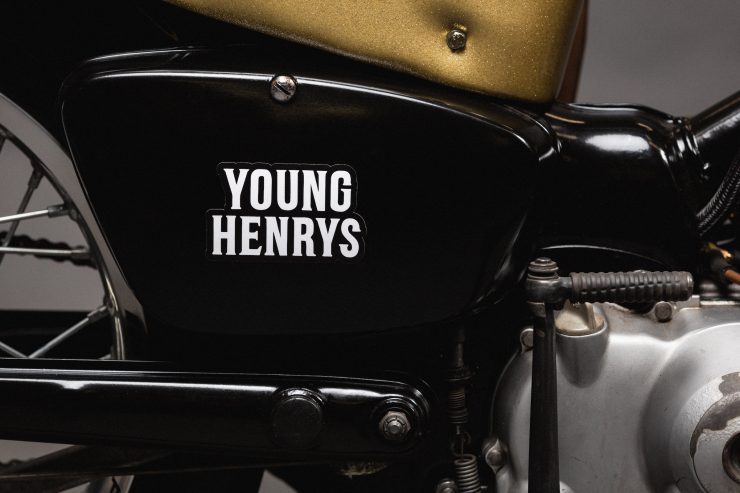 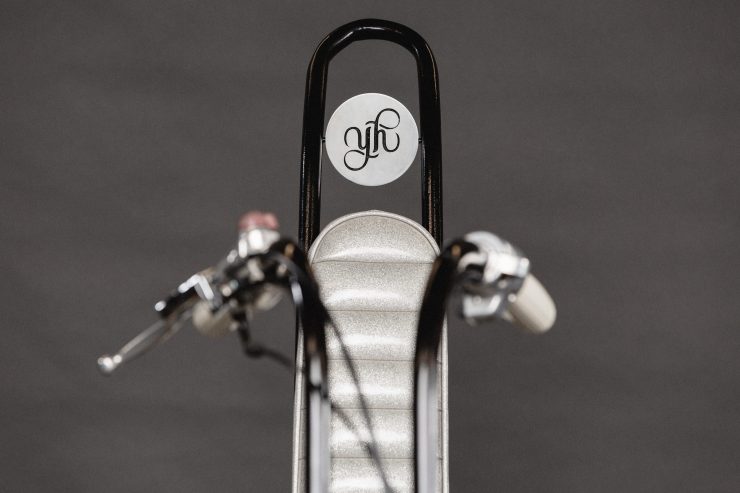 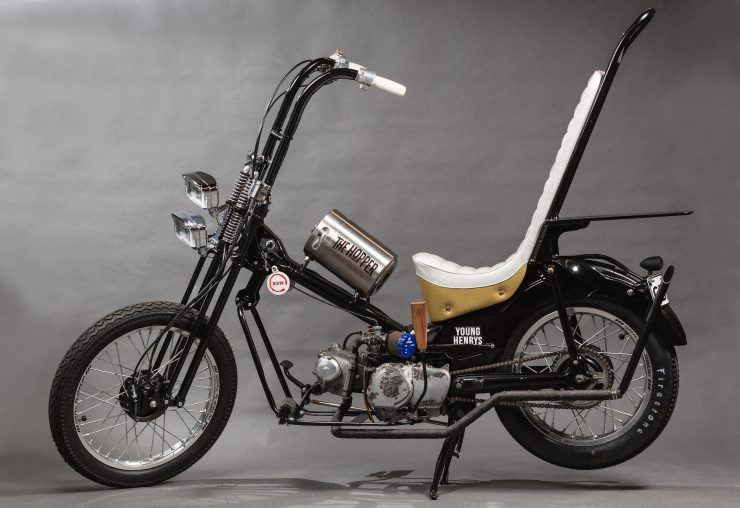 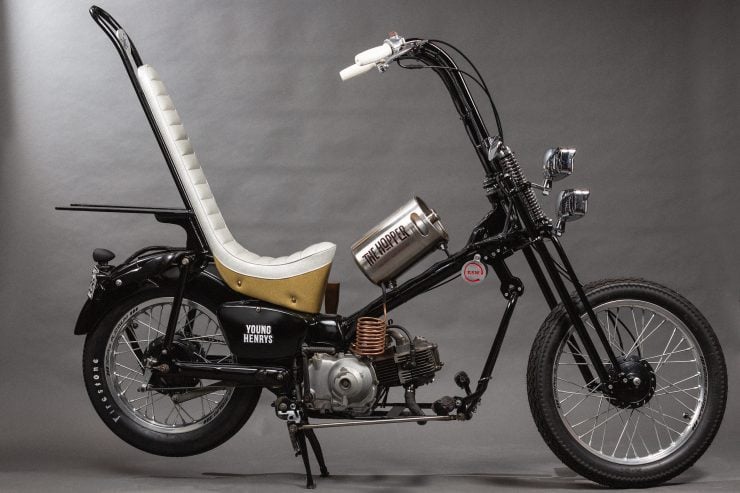 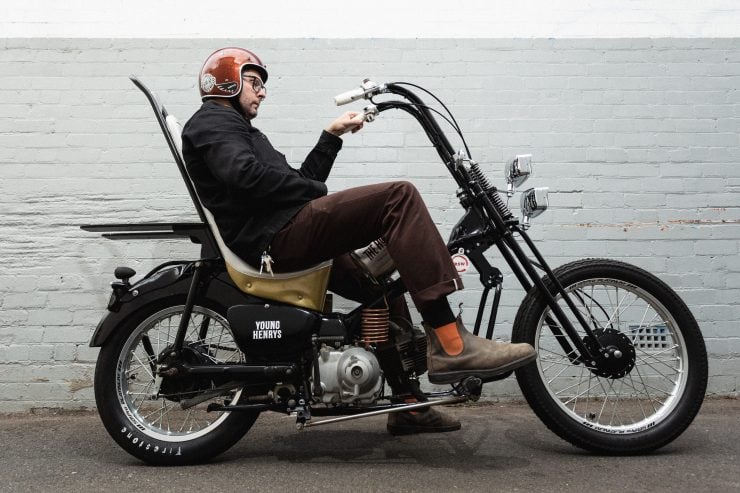 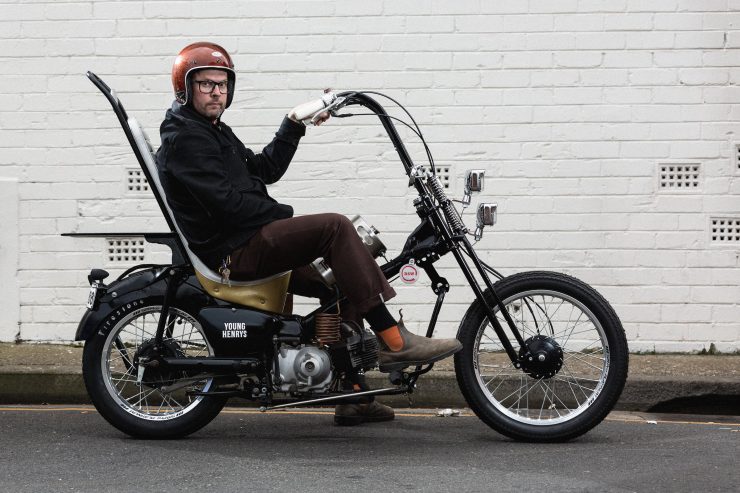 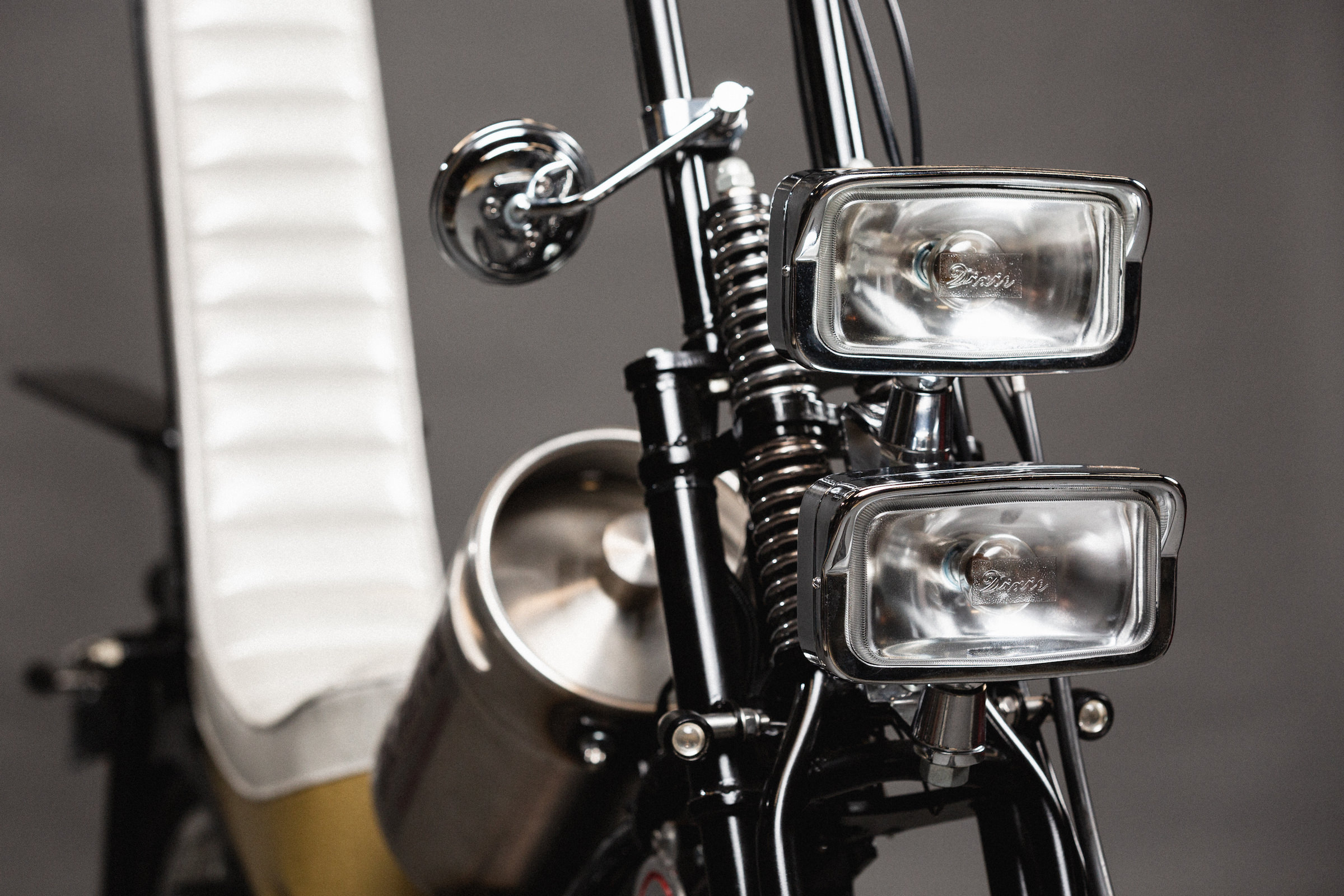