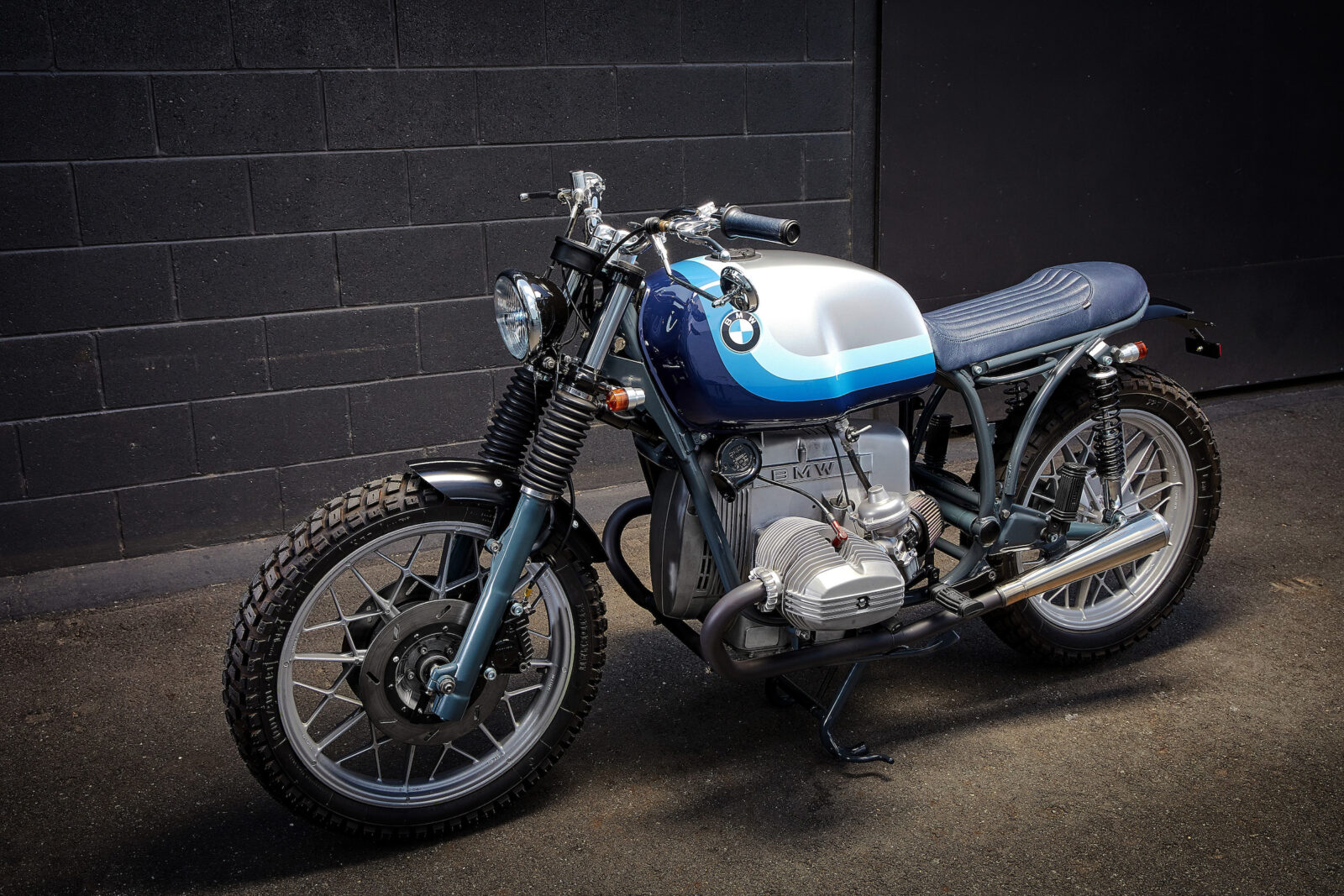 This post was written by Hughan Seary of Ellaspede, with contributions by the bike’s owner Sam K. When possible we like to bring you the story of a custom motorcycle in the words of the people who built it to cut out the middle man and give you insight into their thought process and methods.

It’s not surprising that the iconic silhouette of a Boxer motor could be the memory to spark Sam’s 1982 BMW R100RT build. Here’s how a fleeting childhood encounter planted a seed for a custom project decades later.

In their day the BMW R100RT (T for Touring model) was one of the most expensive production bikes you could buy and although they were well reviewed for touring purposes and had a great production run from the mid 70’s to early 90’s, they gained a bit of a reputation as an ‘old man’s bike’.

Maybe it was the massive fairing (that was actually wind tunnel developed and decreased fuel consumption for touring despite the extra weight) or the high price only ‘older people’ could afford. But whatever the case, BMW had built an excellent bike with the type of 80’s german quality that would position it as a ‘forever bike’ to eat up the miles and last a lifetime. 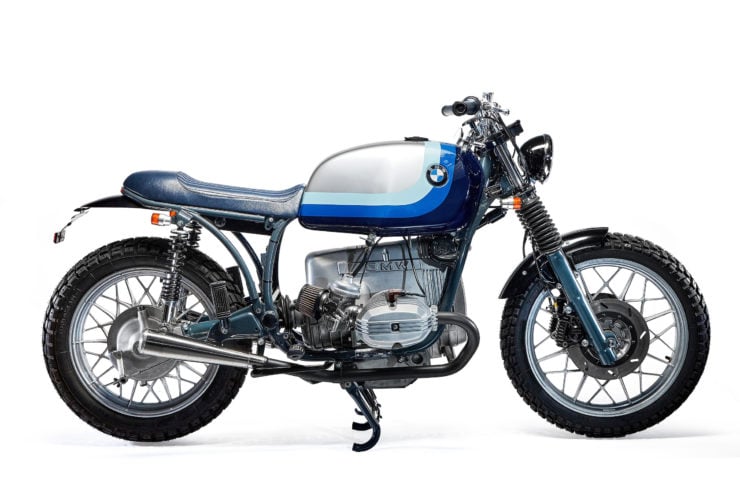 So how did a young Engineer from Sydney with an eye for design end up with an ‘Old Man’s Bike’ from the 80’s? These days it’s usually because they spotted a cool one on social media, but we’ll let owner Sam start his story…

“I randomly have this vivid memory of an Airhead of some description growling down the streets of Newcastle when I was a kid. The cylinders all ‘pokey-outey’ and the block sitting at that weird jaunty angle somehow etched itself into my memory. I didn’t get into bikes for a couple of decades after that, at which point I joined the dots on what I’d actually seen and realised I’d have to have one at some point. Fast forward a few years and everything lined up to get my hands on one. I was keen on one of the early/mid 80s models, but still with the iconic tank shape from that era and the ‘snowflake’ wheels.”

“I’ve had the beamer for a few years now. She’s been a very faithful weekday commute, as well as a bunch of fun out on the old windy roads out of Sydney whenever I’ve found a chance to stretch her legs.”

“I bought the bike from a bloke who was keeping himself busy in his retirement bringing otherwise totalled old bikes back to life out of his garage. I don’t have a long history of the bike; only that he’d brought it out from South Australia in pretty good knick but with a big old crack across the crankcase. He took the opportunity to do a full mechanical rebuild and get her back on the road before passing it onto me to free up space for a new project.” 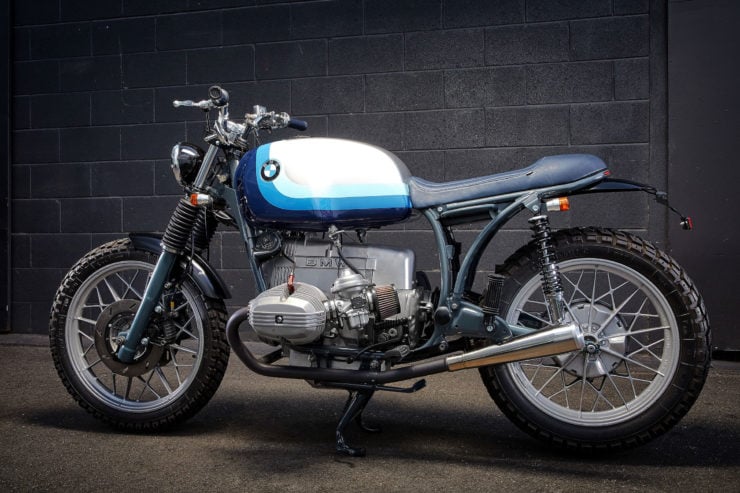 After a few years riding around Sydney with the BMW in ‘old boy status’ Sam knew that the next step was going to be a custom build.

“I guess it boils down to self-expression. I wanted a bike that I knew there was only one of in the whole world, and that it reflected me and my tastes. In going custom I’m so happy we were able to create something uniquely mine but also objectively good looking, and still practical that I can enjoy for many years to come.”

“I’d been following Ellaspede on the socials for a few years before hitting them up about doing a build. Through that I’d built a bit of an understanding of their aesthetic and what they uniquely offer. Not strictly related to the build, but I also love that Ellaspede have such a strong focus on community and brand. “

“I’m an engineer by day, and from that have built an appreciation for good results coming from a solid understanding of the foundations/first principles of what’s being designed. Having a shop approach the process from industrial design principles was a real draw-card. I don’t have that knowledge, and also have no shortage of crazy ideas, so working with someone with those design foundations steering the project (and my ideas) was important.”

With contact made and some plans laid out it wasn’t long before the R100RT was rolled off the transport truck and into the workshop. Sam also sent through some inspiration from classic auto designs and picked bikes from some of our favourite international builders to help us get an idea of the direction we were heading… 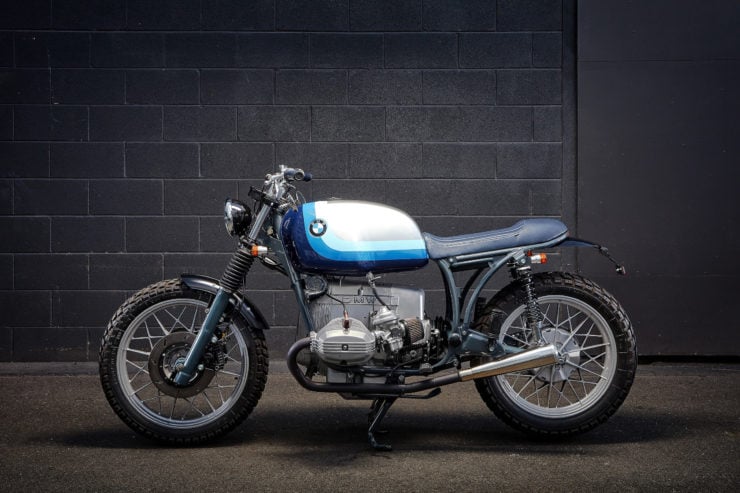 “When poking around for inspiration for the build, I found CRD49 build by CafeRacerDreams. It really resonated how they’d taken a classic colour way (silver smoke it was called I think?) but reimagined with a unique/modern spin. The idea of taking old and making new was super cool but the idea of applying that to the green and gold paint on my bike wasn’t really setting me off. I researched other classic airhead colour schemes and discovered the fairly rare ‘Exklusiv Sport / Lufthansa’ colours that came on a limited run of R90S’s in the 80s. It just jumped out at me. That inspiration, mixed in with a fair bit of Ellaspede magic, and we’ve got the colours on the tank today.”

“Other inspiration for the tank design came from me digging a whole bunch of retro 70s tanks with the big block colours and bold curves of that era. I also wanted to see those rad stripes when I was riding so wrapping the curves over the top of the tank was a must!”

“The anthracite grey frame and forks was an interesting one. I think the idea came from my day job in the graphic design biz where there is a soft rule to never use absolute hard black when designing (as it can look a little bit unnatural/inorganic in that medium). I instinctively followed this idea and thought that a dark grey could also really complement the blues and silvers on the tank/ seat/grips and also the shimmery aluminium of the vapour blasted pieces. It actually came out a bit lighter than we expected but it was a good surprise as I think it really works well.” 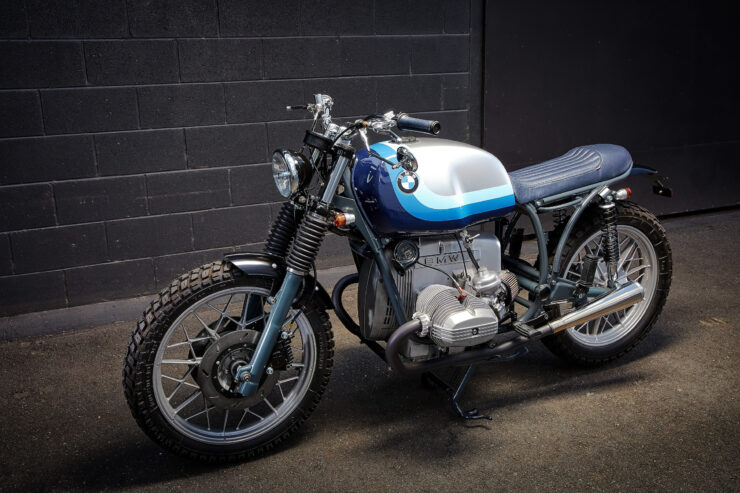 We really liked Sam’s intent for the bike and went to work on the build. The R100RT models are rumoured to have a slightly higher compression ratio than some of the other R100’s, presumably to push that big touring fairing around. So once the fairing and other stock parts started to come off the bike it really became evident how much lighter the bike had become, even just pushing it around the workshop. That’s some free performance gains right there!

As usual, most of the stock gear wasn’t going to find its way back on and the parts that did were all refurbished, replaced or got the usual paint or polish. A stack of custom fab went into the bike with some key input from Sam on aesthetics and an intent to keep most of it looking like factory fit and finish as if BMW might have done on a ‘stripped back’ version of the day.

Our favourite parts of the build are definitely the custom subframe which can be tricky to get looking right with the ‘offset BMW geometry’ and holds quite a lot of elements together while still looking super clean. We also used this bike as a tester for an upcoming Ellaspede universal muffler that we’ve been developing and were pretty excited to have them looking and sounding just the way we wanted when this bike rolled out. 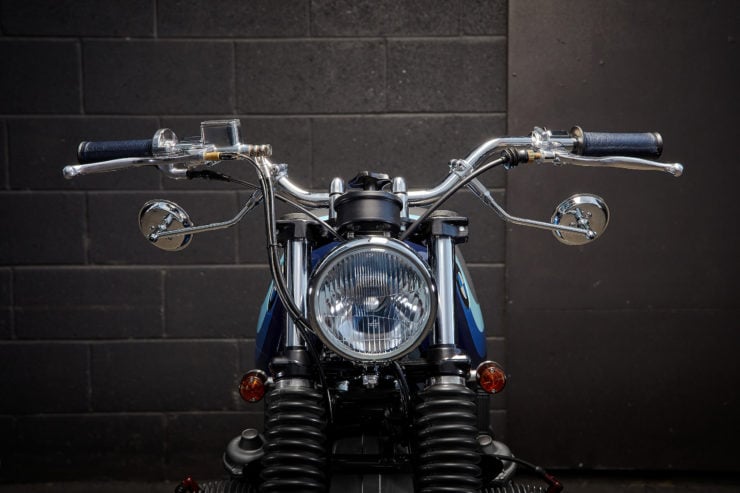 When we asked Sam about his favourite parts… “I love the way that the curves in the subframe flow into the rear fender. That whole piece was a bit of a yolo… I tossed the idea out there and you folks ran with it but it turned out fantastically!”

“I also love how tidy the front end came out. From the switchgear that kind of disappears into the bars, the beautifully placed bates-style lamp, and just the right amount of fork lowering. It really is a very elegant package. Elegant is weird for what I guess is kind of a “scrambler”, but hey I think that speaks to the unconventional nature and unique mix of styles going on in the bike that I love.”

“Then of course there’s the tank… which again was also a bit of a gamble. I’d never tried designing a tank livery before, but had a gut instinct for what I thought would look cool and fortunately that gamble paid off (with the crucial contribution of Ellaspede picking out specific colours). There was an awful lot of umming and ahhing in our house over whether it was going to look striking (in a good way) or be a bit ostentatious, but it definitely turned out to be an absolute ripper.”

Building a custom R-series BMW these days is a reasonably well travelled path, but Sam’s shown that by drawing on some quality inspiration and committing to a well thought out build you can achieve a bike that looks like a classic custom BMW but also highlights the individuality of it’s owner.

We find that when a custom bike is done ‘right’ then many of the subtle details and design cues disappear at first glance, instead blending into an overall aesthetic that perfectly fits together. Luckily Sam shared much of that vision with us and as a result has got himself an R100RT with a timeless style that you don’t often see on custom builds. 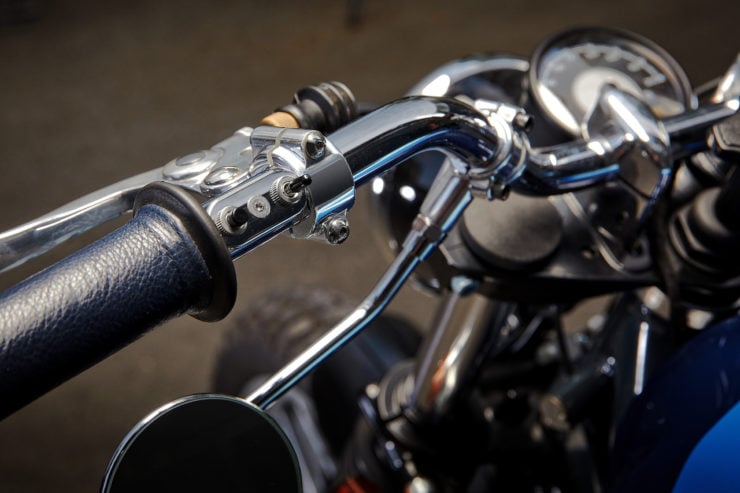 “Reflecting on the process, I’m really glad we took a few gambles on ideas that popped into my head rather than tried-and-true strategies for customising these bikes. That, mixed with Ellaspede’s wisdom and experience in effective ways to bring those ideas to life and we’ve ended up with a final result that I absolutely love and can’t wait to get out and about on every day.”

The only shame for us about doing builds for interstate clients is that we don’t get to see the finished bike (and owner) popping back into the shop for a coffee now and then! But we’re hoping Sam keeps us updated with ride photos so we can also enjoy seeing one of our favourite Bavarian builds out and about.

“The bike has now slotted back into my life as my weekday commuter where she catches an awful lot of eyes and compliments around the streets of Sydney. She’s made it out onto the back roads for a few cheeky rides since coming back home, but it’s been a tough run lately with the air thick with bushfire smoke. When it hasn’t been thick with bushfire smoke it’s been thick with (very welcome) rain. With some good weather back I’m looking forward to some solid weekenders through the national parks and along the rivers around the city.”

Here’s to a lifetime of enjoyment on your R100RT Sam! We’re sure it won’t only be kids that are turning heads when you’re blasting through the backroads of Sydney now. With that iconic motor now surrounded by some classic custom design you’ll be making memories for motorcycle enthusiasts for years to come! 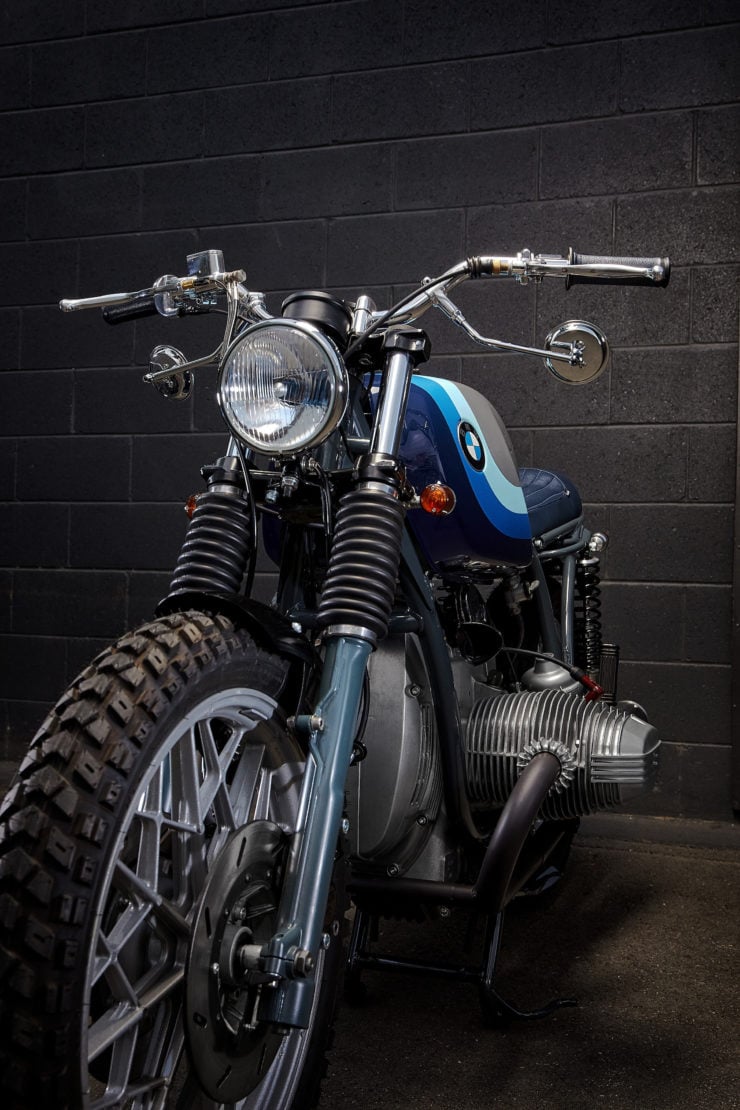 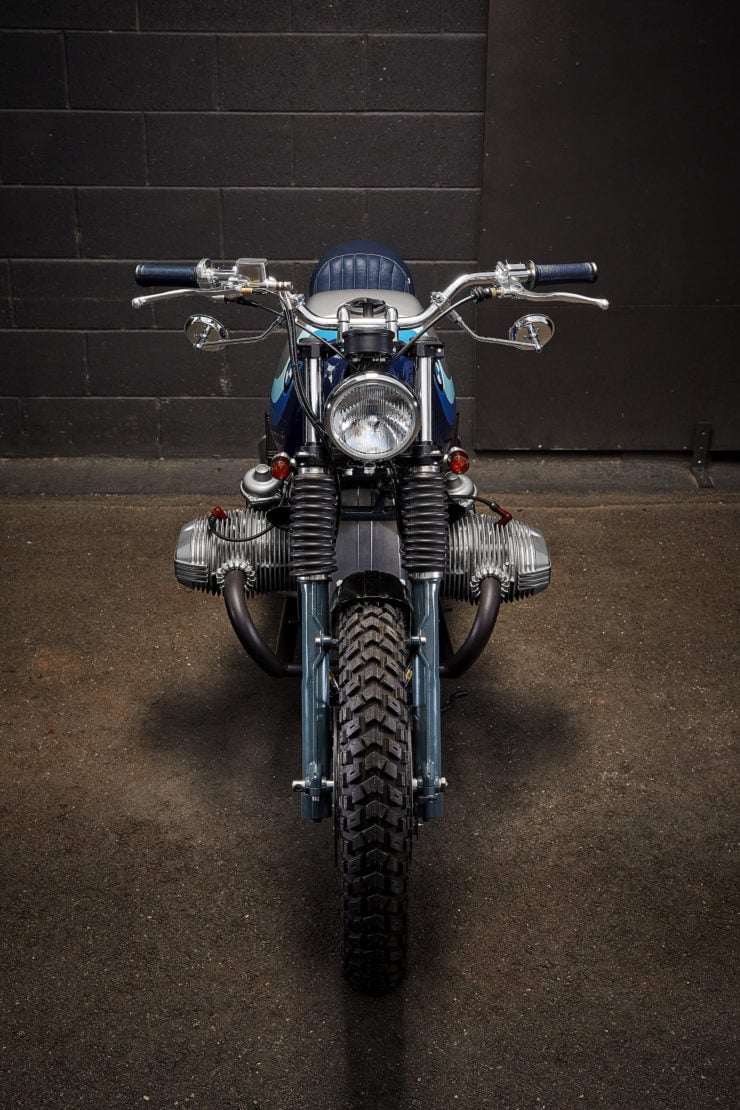 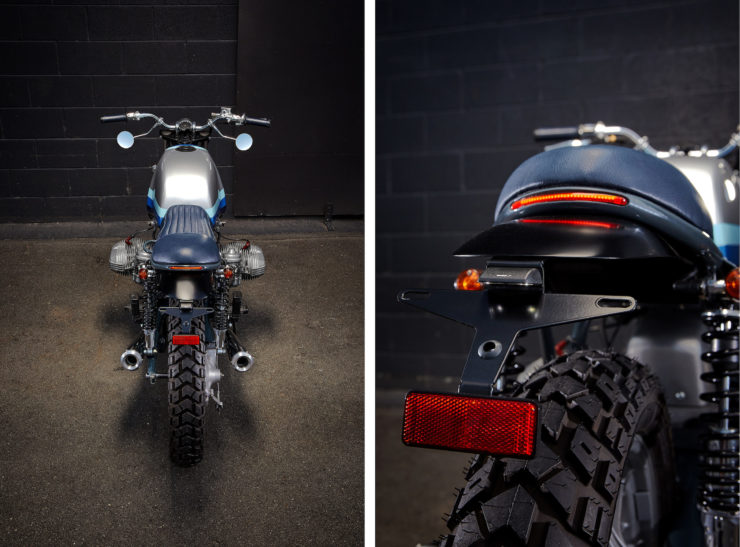 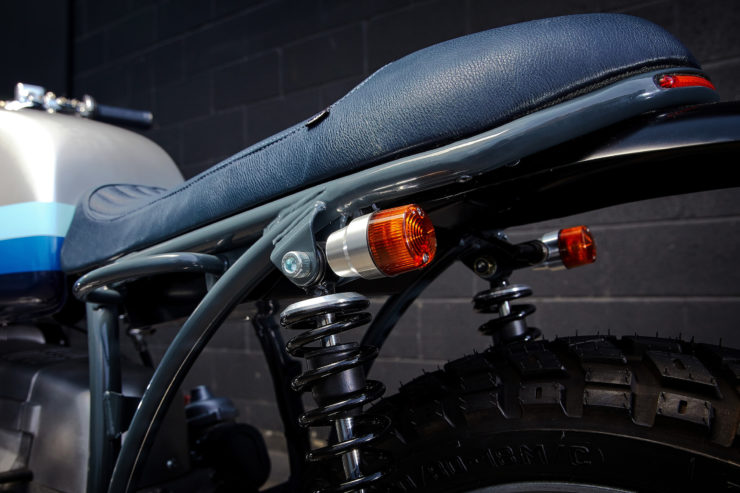 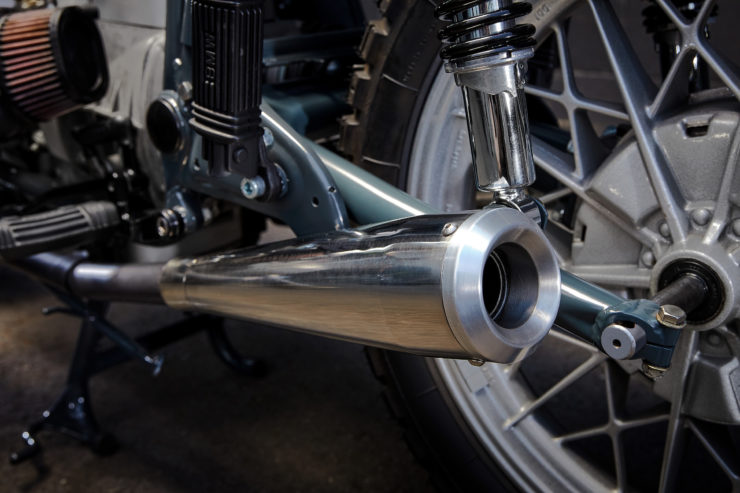 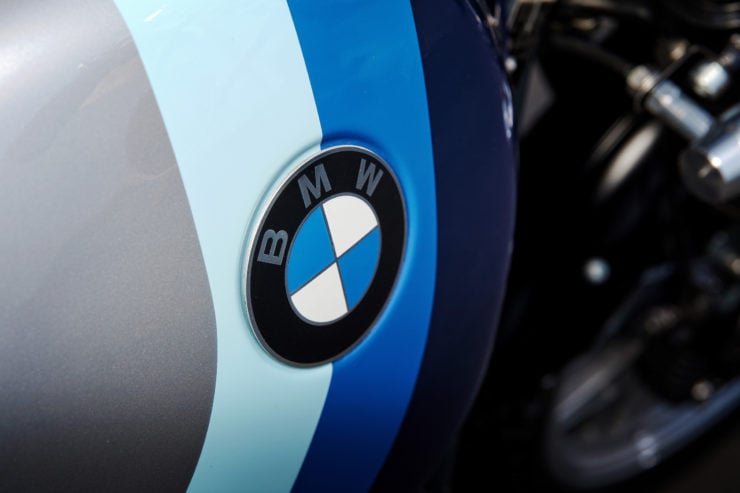 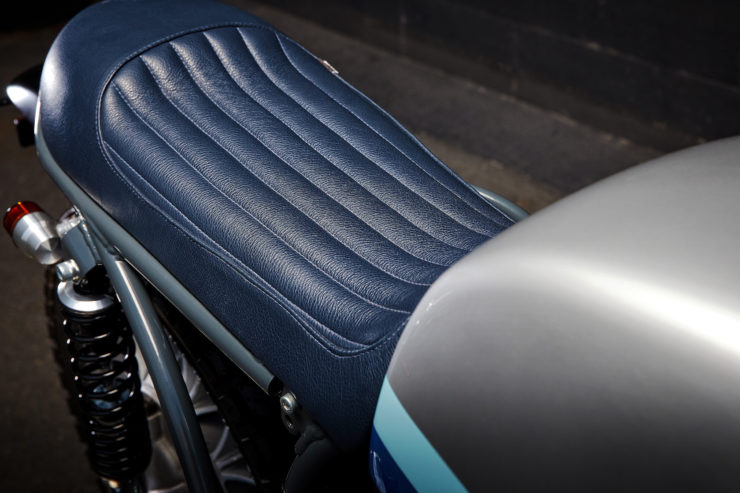 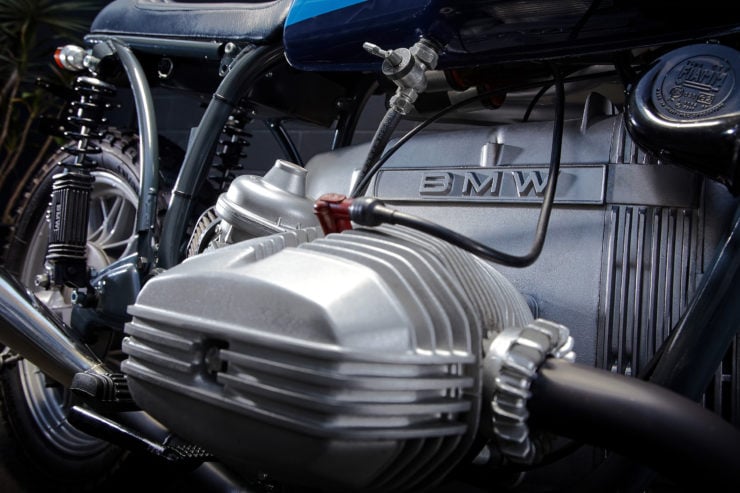 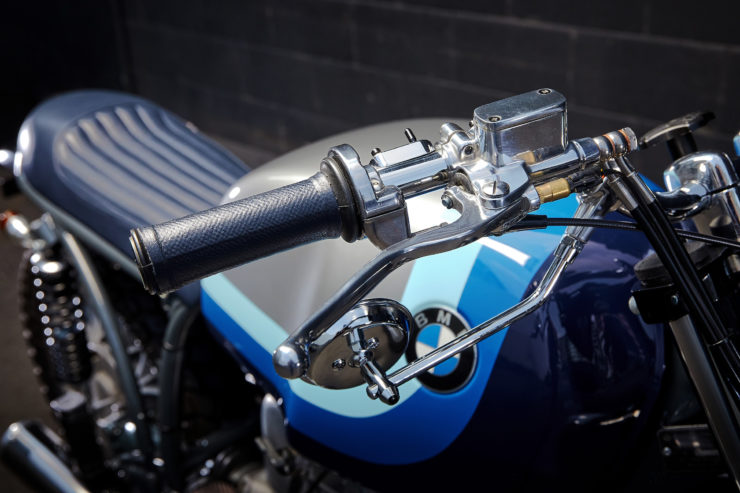 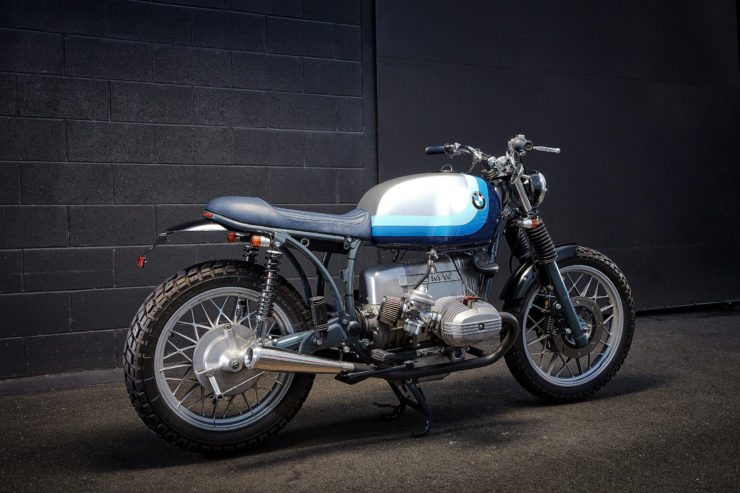 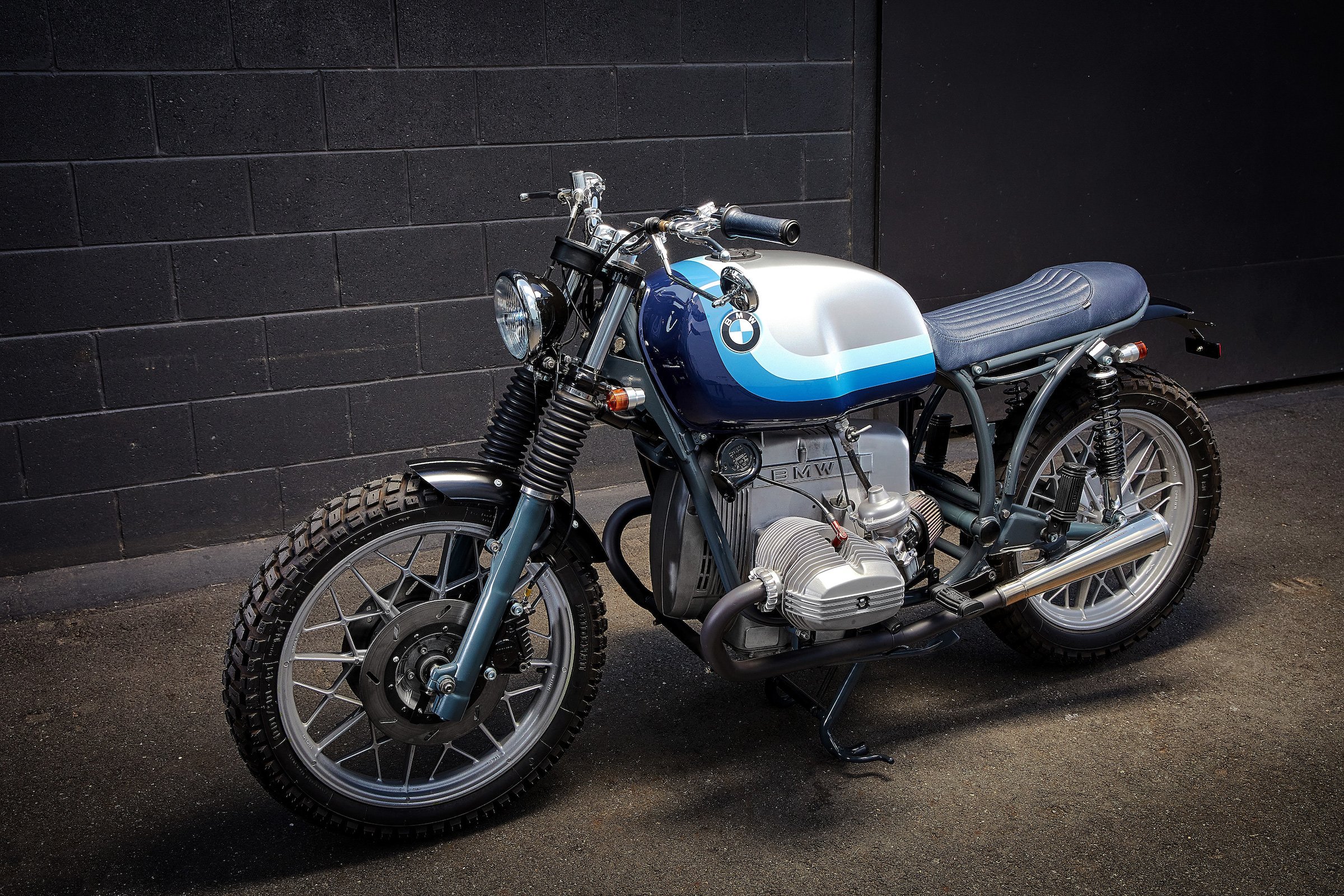