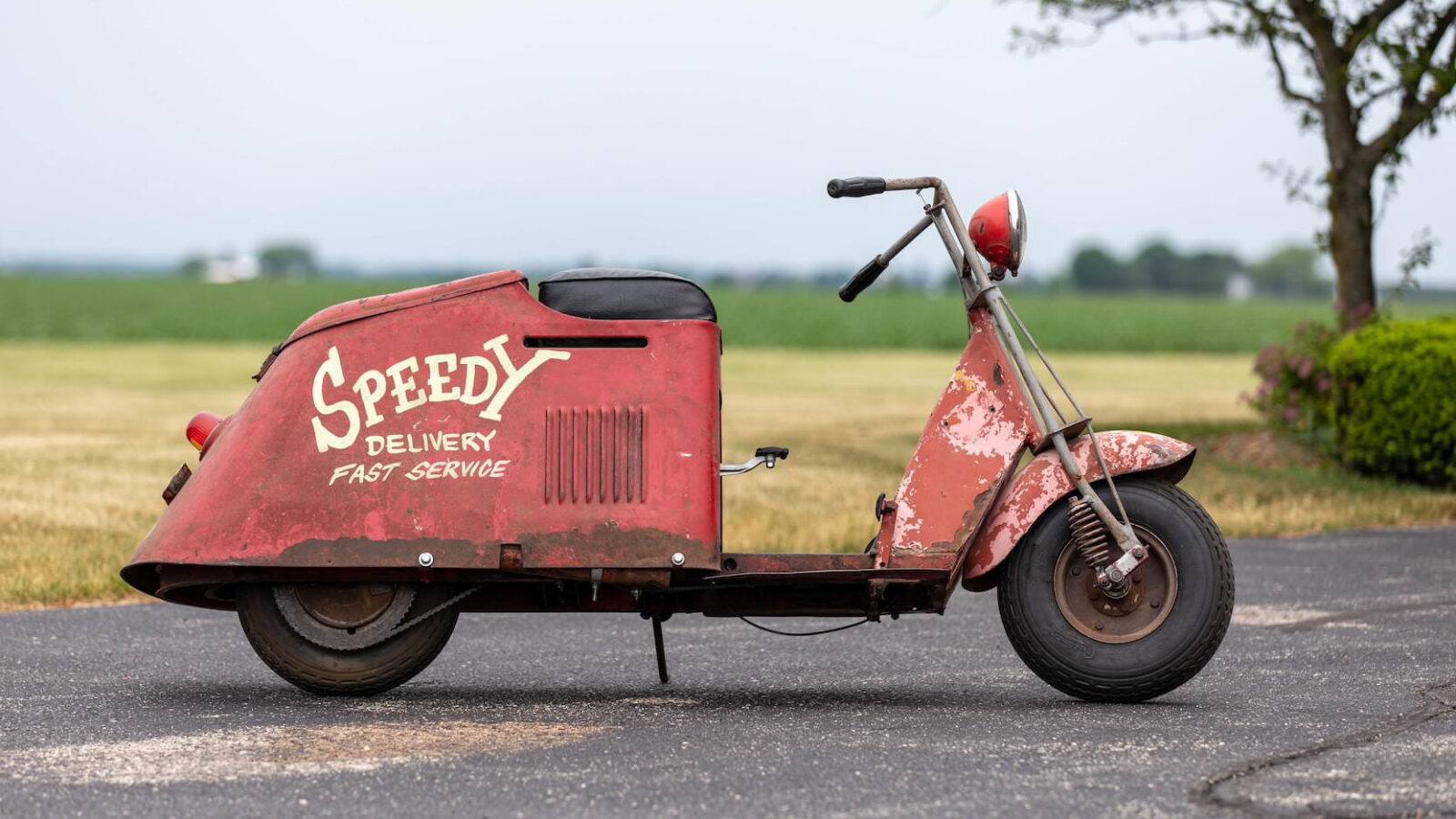 This is an original, unrestored Cushman Model 62 Turtleback, an iconic American motor scooter that was a period competitor for the likes of Vespa and Lambretta.

Although Cushman are now most famous for their series of mid-century scooters the company first started out making small industrial engines like the Husky, for farm equipment, pumps, lawn mowers, and boats.

In 1936 they developed their first motor scooter to help boost engine sales which had been lagging due to the Great Depression. The plan was simple, build an inexpensive scooter that was cheap to run, then sell them to people who needed motorised transportation but had very little money to spend.

As it turned out, the plan was a winner. Cushman sold as many scooters as they could build, in fact it quickly became the company’s main source of revenue and with the outbreak of WWII they developed a special military version called the Cushman Airborne Model 53. 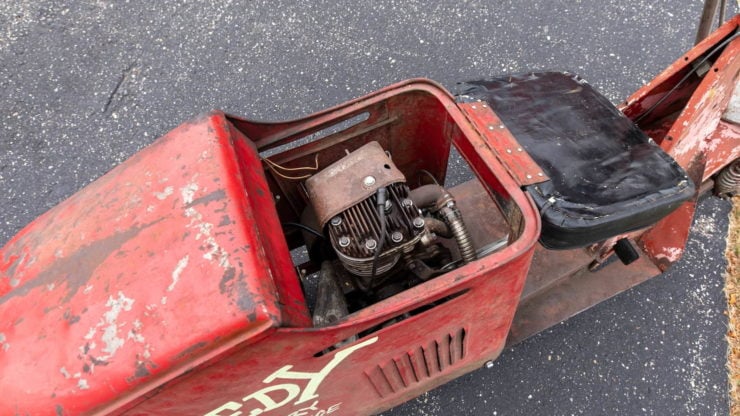 The Model 53 was nicknamed the Parascooter as it had been developed to be dropped by parachute with Airborne troops, providing them with transport as soon as they landed, and meaning they were far more mobile than they would be otherwise.

Other Cushman scooters were used for transport on and around bases and for messenger services, this meant that an entire generation of young American men became familiar with the brand either by riding them in the service or seeing them around on base.

After the war Cushman released an increasing number of models, some of which were designed to look like smaller versions of popular Harley-Davidson and Indian motorcycles, like the Cushman Eagle. The boom years after WWII meant that not as many people needed cheap transport, as they could afford full size motorcycles or cars, and as a result scooter production ended in 1965 after years of declining sales.

Cushman didn’t go out of bankrupt however, the plucky company stayed in business building golf karts and other industrial vehicles until it was acquired, it’s now a wholly-owned subsidiary of Textron. 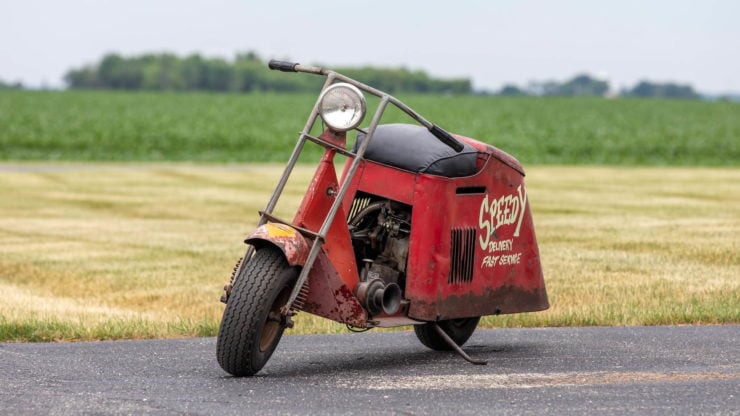 The Cushman Model 62 shown here is a “Turtleback” design from 1950, these were the bread and butter scooters for Cushman in the 1950s. It’s powered by a single-cylinder, four-stroke 221cc motor with 4.8 horsepower and it has an automatic centrifugal clutch meaning there’s no need to manually change gear.

The step-through design of the Model 62 meant that it was popular with both men and women, it features ample front and rear fenders to keep the puddles at bay, and attractive styling that included a small rear luggage trunk.

The Model 62 you see here was originally purchased by well-known Cushman dealer Jim’s Scooter Parts in St. Paul, Minnesota. It’s fitted with a foot-operated Klaxon horn which would come in rather handy in the year 2020 with all the texting drivers on the road.

The scooter remains in unrestored condition proudly displaying its original “Speedy Delivery, Fast Service” livery. It’s reported that it was running as recently as this past May, however it would likely require a bit of work before being put into regular use.

If you’d like to read more about it or register to bid you can click here to visit the listing on Mecum, it’s due to roll across the auction block in mid-July, and it’s listed with no reserve. 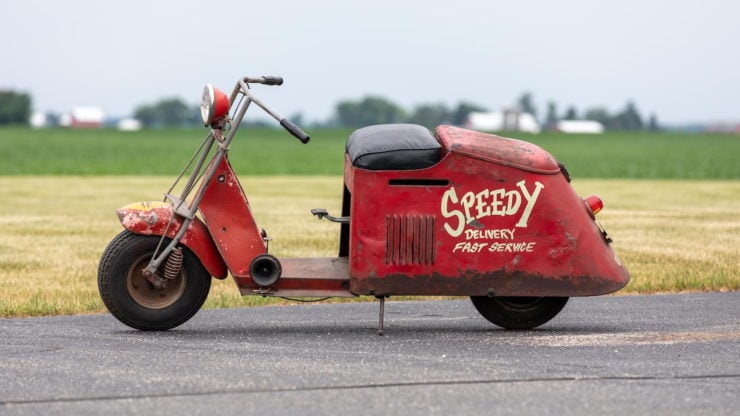 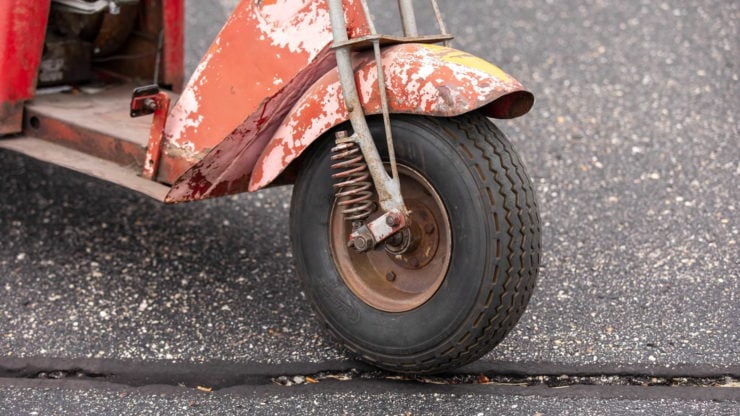 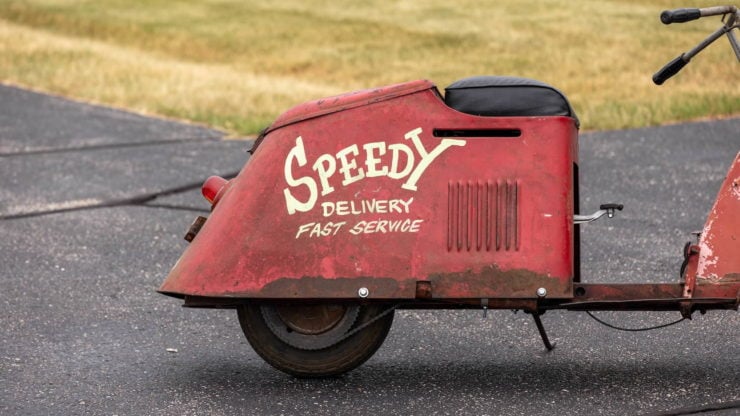 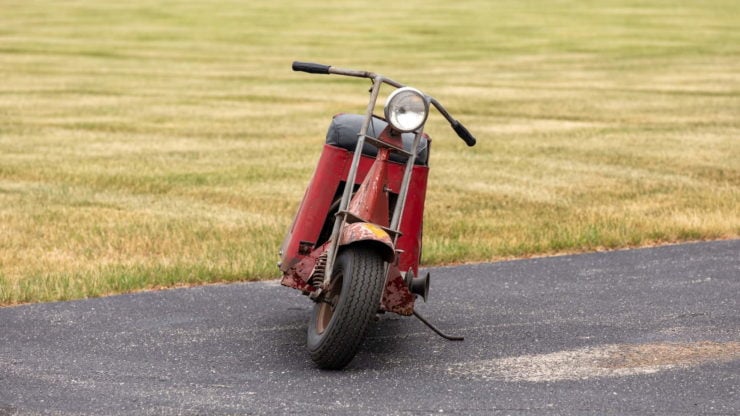 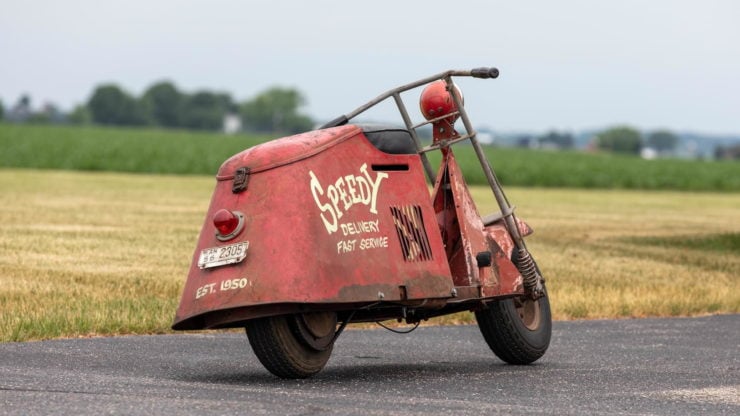 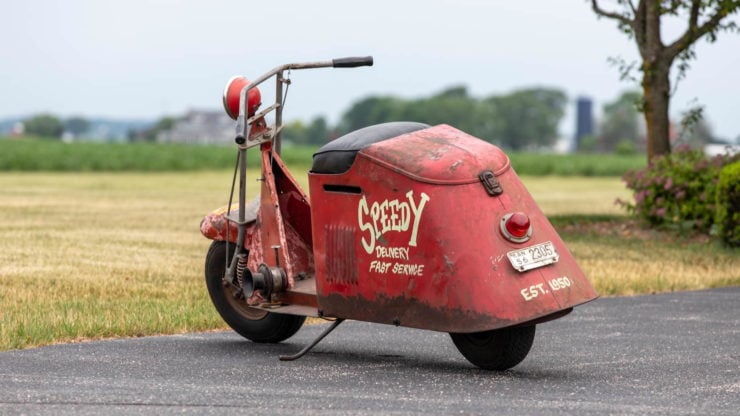 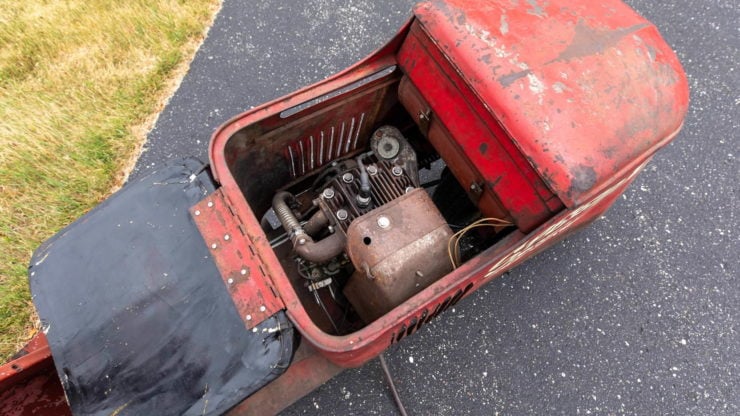 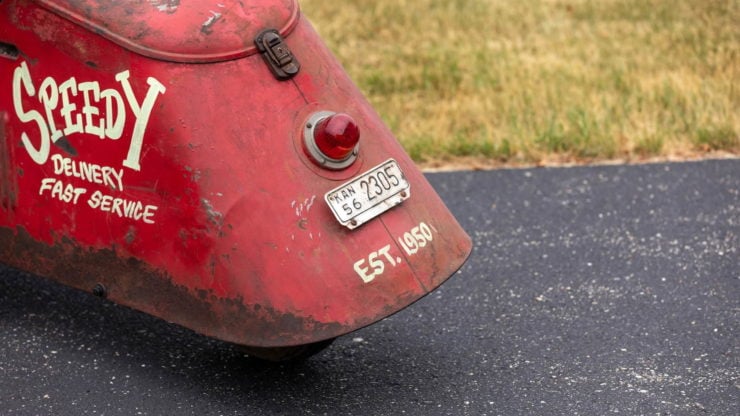 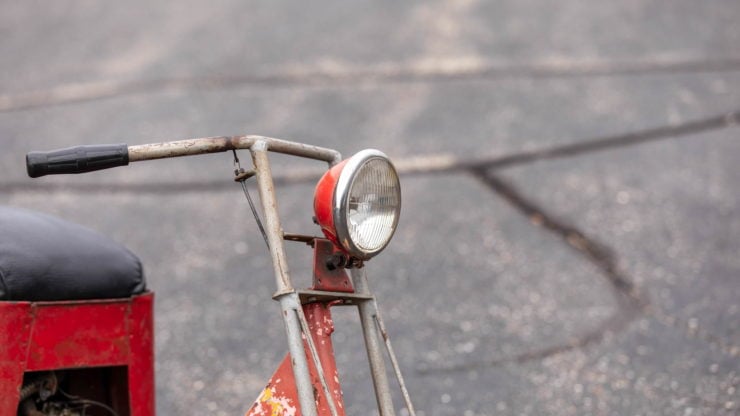 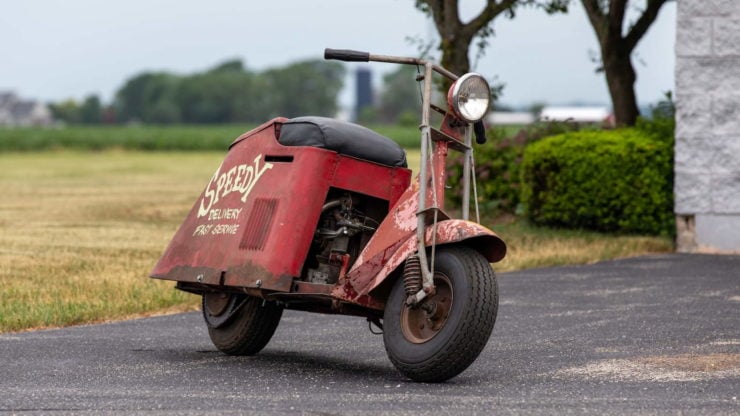 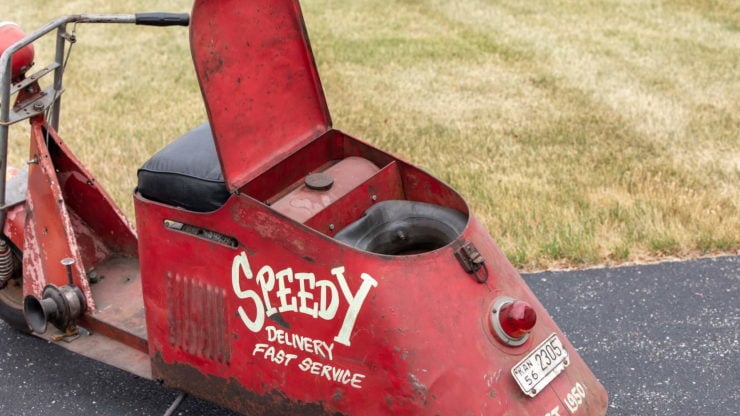 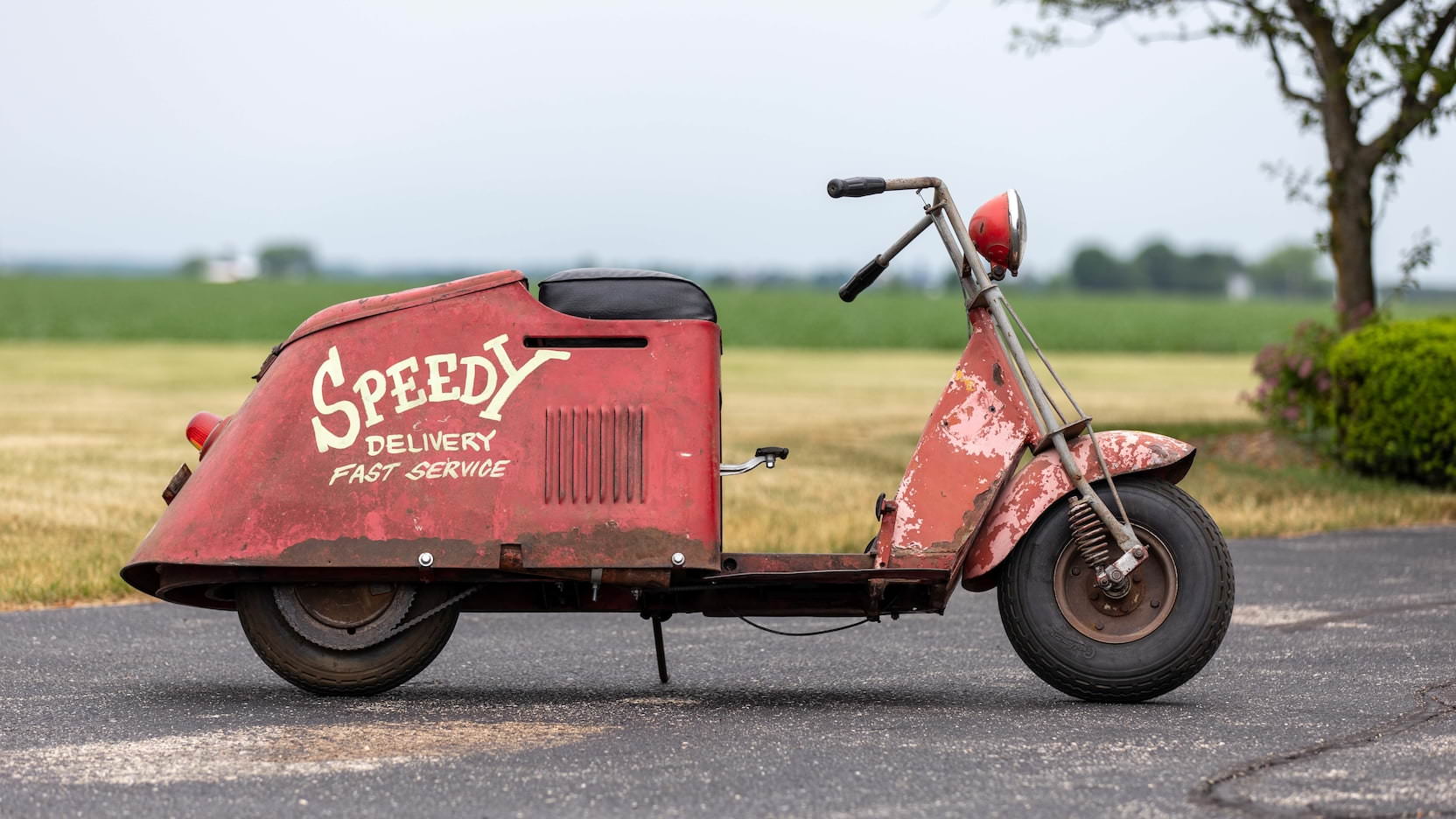