The Crovel Extreme II is the follow-up to the now world famous Crovel Extreme I, a tactical survival shovel that packs over a dozen tools into a single, mid-sized utility shovel.

The Crovel Extreme II adds to the list of tools and steps up its game with better engineered components and a slightly better thought out design, it now comes fitted as standard with a hardened 4140 chromoly alloy shovel head that includes an axe, a saw, a bottle opener and a shovel. A waterproof 14 inch hollow steel handle designed to be filled with survival supplies like waterproof matches. 15 feet of 550 paracord wrapped around the handle, a hammer head, a crowbar head that includes a chisel and a pry bar.

If you’ve been looking for that perfect to to toss into the trunk of your car, this might very well be it. You’ll be prepared for mud, snow, sand, velociraptors and flesh-eating zombies. 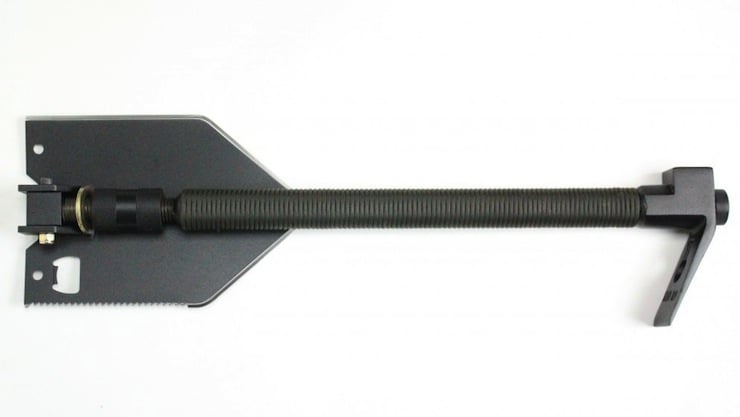 This is the Lumber Jack, it’s a new release from the team at BoomCase who have become globally famous for their handmade boomboxes – each…

This is the Protective Motorcycle Hoodie from the team at Akin Moto, it’s been designed for use by motorcyclists with a full DuPont Kevlar® lining…

This is an original 1969 Volkswagen Super Bugger, possibly the most unfortunately named vehicle of all time. I’ve never actually seen one of these come…