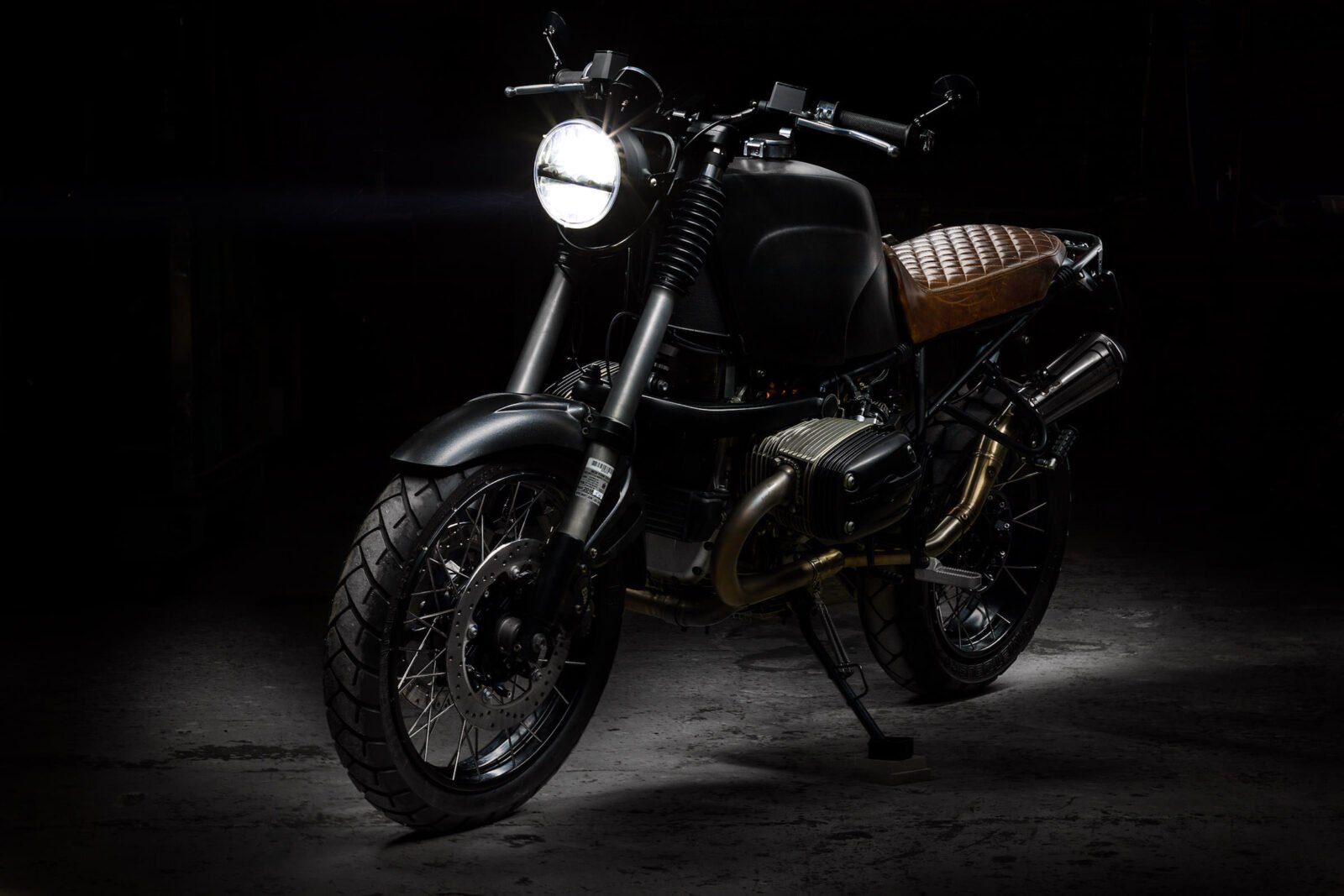 Editor’s Note: This article was written by Davey Whitcraft of Whitcraft Services. When possible we like to give custom builders the chance to tell the story of their work in their own words – cutting out the middle man and offering a unique insight into their thought process and methodology.

The modern BMW GS is not unlike a magic carpet – almost telepathic in it’s manners. After so many generations of refinement, the chassis, motor, and suspension are nearly sublime. Yet, it is also the unique design of these components that also makes the bike heavy, unwieldy, and unable to express the classic looks and lines of the older airhead BMW’s that we all seem to adore.

The goal of this bike was to create a highly minimal, lightweight and classically styled BMW GS that would not only be reliable and rideable, but look good doing it.

The project started with perhaps the pinnacle of classic GS engineering, the moment in GS evolution that marks the most refined version of the bike before it went full-tilt plastics and technology – the R1150GS Adventure. This model was still mostly constructed of metal yet had the modern refinements that make riding all day long in any condition surprisingly fun and effortless; a stressed member powerplant, the renowned Telelever front suspension and rear Paralever driveshaft and suspension.

The last in the evolution of the BMW R1150 ‘Oilhead’ motor was used; a 2004 Twin Spark edition which has two spark plugs per head – solving the surging issues that plagued the earlier renditions of this motor – mated with an R1150RT-Police EVO transmission (this unit has a lower first and sixth gear, improved shifting and durability, plus it is black!) I began the project with these, and built the bike around them – the inverse of how most bikes are constructed, this one is a motor with stuff bolted to it.

To simplify maintenance and reliability, and to shave off weight, some modifications were done. 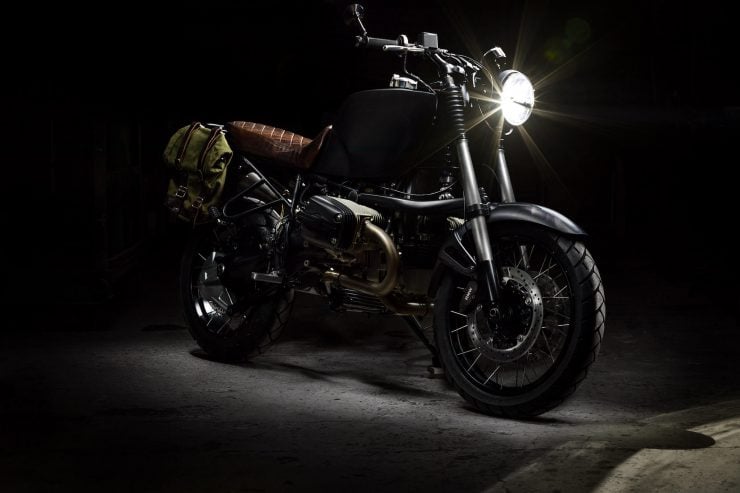 First, a new externally located fuel system was designed using AN fittings and hoses that dry break to allow the fuel tank to be removed quickly, an uprated hot rod fuel pump, serviceable pre and post filters, adjustable aerospace grade fuel pressure regulator, higher flowing fuel injectors, an electronic jet kit which controls fueling on the fly and an air-fuel ratio gauge to monitor adjustments in real time. K&N pod filters were fitted, and function properly due to the extensive programmability that the electronic jet kit offers. Clearing all the spent combustibles from the cylinders is now via cera-coated header pipes, a Y-pipe cat delete and a free-flowing Unit Garage high exhaust. Control of the throttle body butterflies is handled by a more responsive short throw Domino racing throttle. Also, the oil cooler was relocated to a lower position in front of the motor.

The electrical system was designed from the ground up, removing 90 percent of the old wiring harness and interfacing the stock ECU with a Motogadget M-Unit Blue, Motogadget Chronoclassic Dark Speedo and Motogadget oil pressure sender (no keys, no display panel, no idiot lights, no fuses, no relays – all ‘trackable and hackable’ via a smartphone interface). A Truck-lite LED headlight was added to the Unit Garage headlight bucket, with Motogadget 360 degree viewable handlebar mounted LED signals, a BAAK Cycles LED tail light. All administration is done via 6 mini Motogadget push buttons connected to the M-Unit via the Motogadget M-button with a single wire. A hellfire loud Denali sound blaster horn was mounted up front to fend off aggressive NYC cabbies. A featherweight Antigravity Lithium battery is hidden under the ECU, kept in place with a custom leather strap and buckle, courtesy of a Brooklyn leather specialist.

Since the bike is considerably lighter than stock, the suspension needed some dialing in. Wilbers shocks were fitted front and rear, with custom spring rates and adjustable preload that allow for proper race sag with the radically lower weight (the bike lost 160 pounds from stock – dry weight is down to 423 from 583). Weight balance front to rear is exactly 50/50. 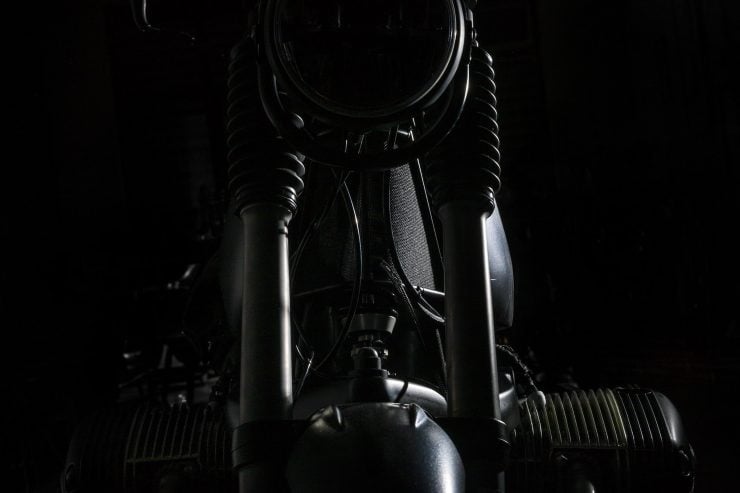 The BMW GS has incredible brakes, and I intended to retain the braking power but lighten and simplify the system. Everything north of the brake calipers is custom, although after 86’ing the mammoth aging ABS, all discs, calipers, and pads and hardware were replaced with new OEM pieces. The levers are more minimally styled classic Brembo units originally destined for the Ducati 900 series, which has the same piston diameters as the BMW. Brake hoses are custom Goodridge plumbed, with the front receiving the twin hose connection treatment and titanium hardware. The rear brake gets the same plumbing, but with a modified Honda Racing Corporation reservoir delete kit.

After extensive de-tabbing and welding a rear loop, the frame, valve covers and suspension elements were powder coated and fork lower tubes were blasted, and received a light polish. Carbon fiber and aluminum fenders were mounted, along with an under seat fuel system mounting plate and carbon fiber motor cover. CNC aluminum footpegs from Suburban Machinery were used up front, with vintage motocross passenger pegs adapted for the original mounting position for a passenger. A lightweight luggage rack and recycled military waxed cotton luggage bag from Unit Garage was added.

A slim profile custom 5-gallon fuel tank was designed in collaboration between Lawrence Au, Tim Harney and myself, to echo the old airhead toaster tank, and afterwards Harney fabricated the tank from aluminum. The knee cutouts were traced from my knees. A Monza flip-up gas cap was mounted. 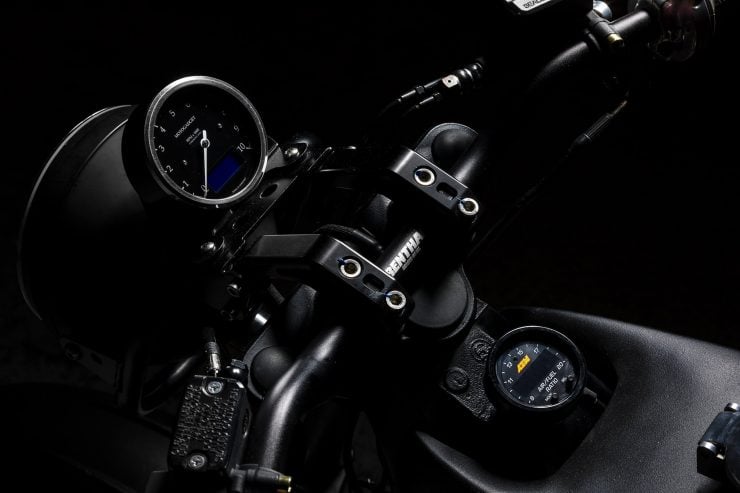 Keino Sasaki fabbed up a custom aluminum shroud in front of the tank to alleviate the awkward space created with the Telelever suspension in front after the GS ‘beak’ was removed.

The seat was covered in luxurious heavy leather with a diamond stitch pattern by Via Meccanica after I trimmed and shaped the seat pan and foam to match the bikes new, slimmer profile.

Every nut, bolt, washer, bushing, bearing, rubber and maintenance or wear item on the bike was replaced with OEM parts, and when possible upgraded (i.e., Nylock bushings in the rear swingarm).

BMW purists might shriek at first glance of this sliced and diced GS, but I hope they would be won over by the traces of BMW geekiness like BMW blue torque spec marking paint on all torqued hardware, proper fenders, bright lights, a properly set-up GS suspension and even an ample removable windscreen. The bike may look like a style exercise but much care went into creating a highly practical and rideable BMW that retains some of the best features that the GS had – yet lighter, faster and with classic looks. 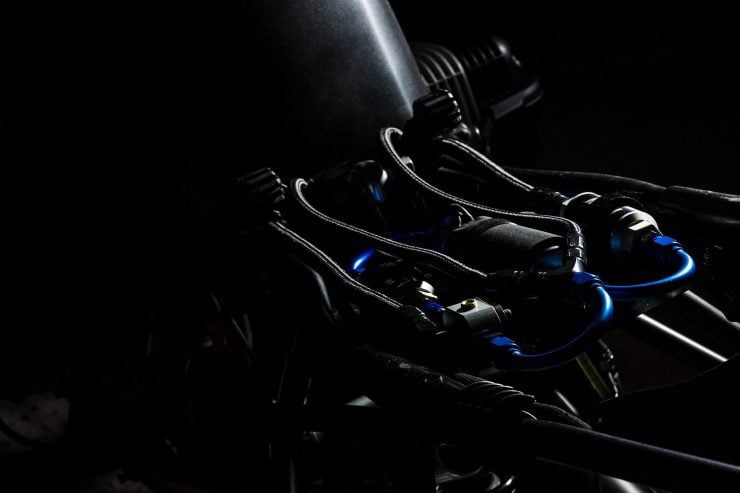 It takes a village… Many were consulted from the Brooklyn motorcycle community, who nudged and helped during different stages of the process. I am eternally grateful for all their help. In the end, the bike turns out to be a total hooligan bike – the front wheel goes up with a little twist of the right hand and the light weight allows it to be hustled through tight corners far quicker than it should. So. Much. Fun.

Whitcraft Services was the name of my grandfathers bus garage – he was the consummate tinkerer – a stand-out childhood memory involved having grandad visit and immediately plant himself in our backyard garage, emerging a day later with several ‘reconfigured’ big wheels – he cut all my worn out big wheels in half, salvaging the still usable front ends and bolting them together with the usable rears – these were some seriously weird creations. My cousins and I (as well as my Dad, Aunt and Uncle) all kind of hung around the bus garage on family visits. Vacations were about making the trip to granddad’s and ‘helping’ in the garage – pestering everyone who was busy with repairing school buses. The first ‘motorbike’ I had was a Dutch moped my dad scored at the police auction in Cleveland for $26. We got it home and commenced in perpetually dis- and re-assembling it, riding it around the city with my friends – an awesome experience for a kid. I started building these motorcycles after riding for years but not wrenching much. After a serious breakdown on an older BMW GS, I just dug into bikes seriously and haven’t seen a reason to stop yet.

If you’d like to visit Whitcraft Services or register your interest to buy this bike or order your own, you can click here. 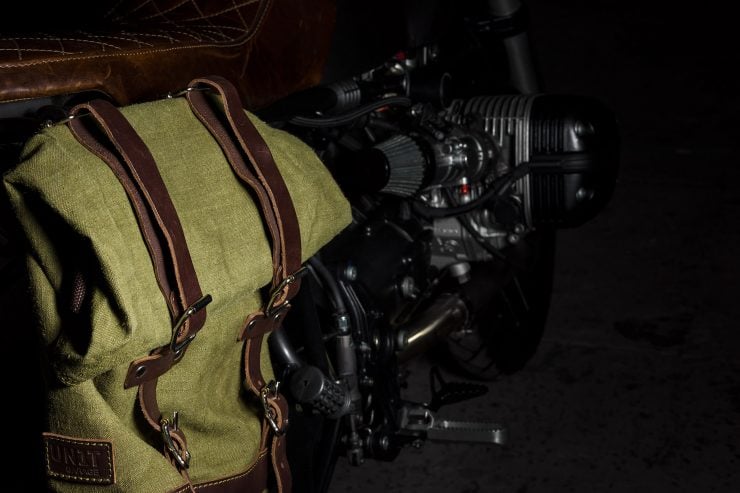 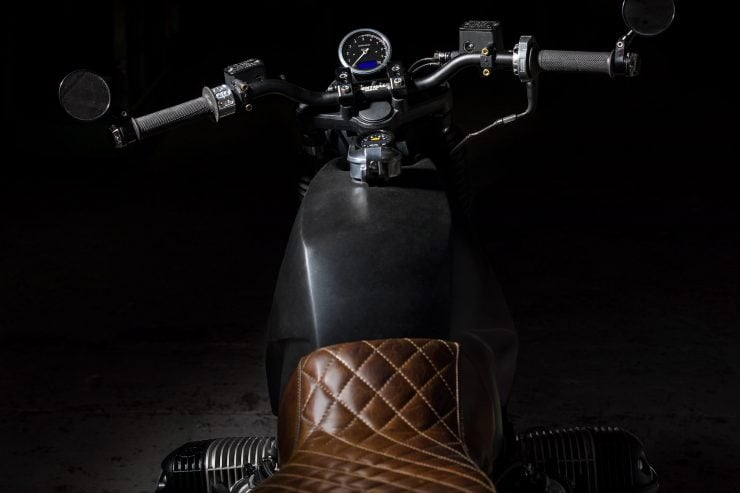 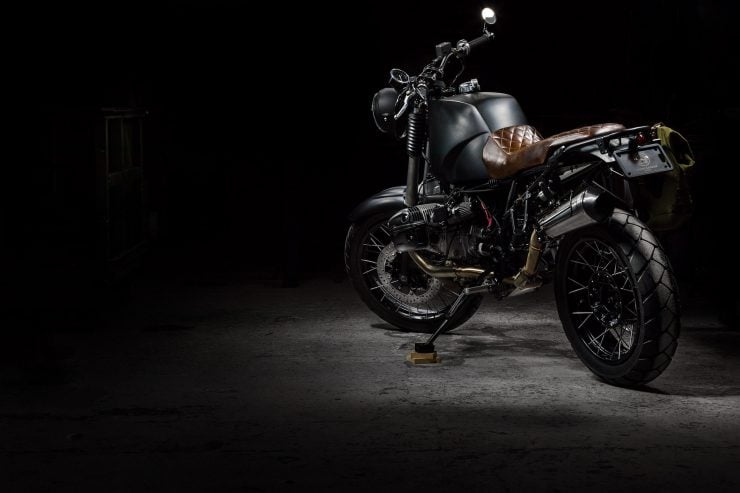 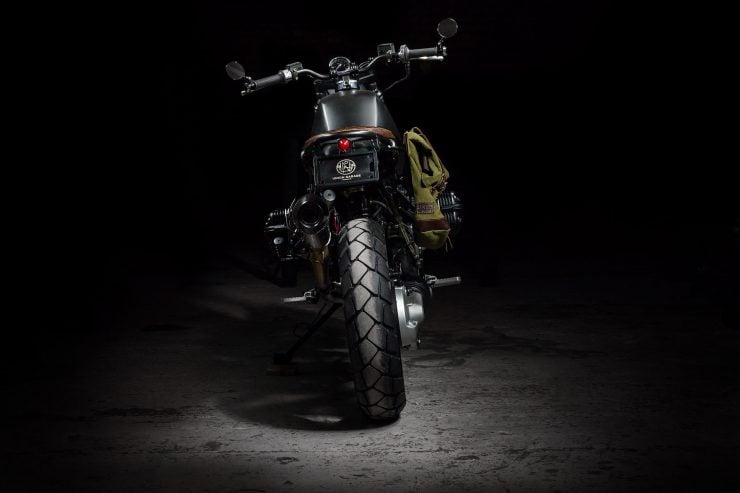 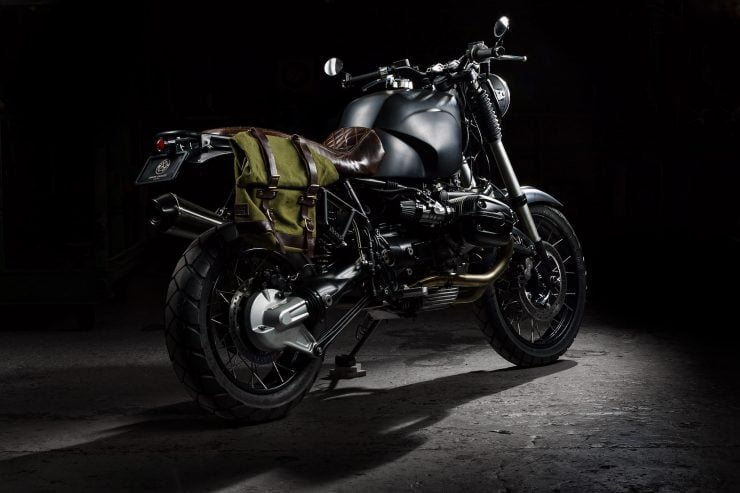 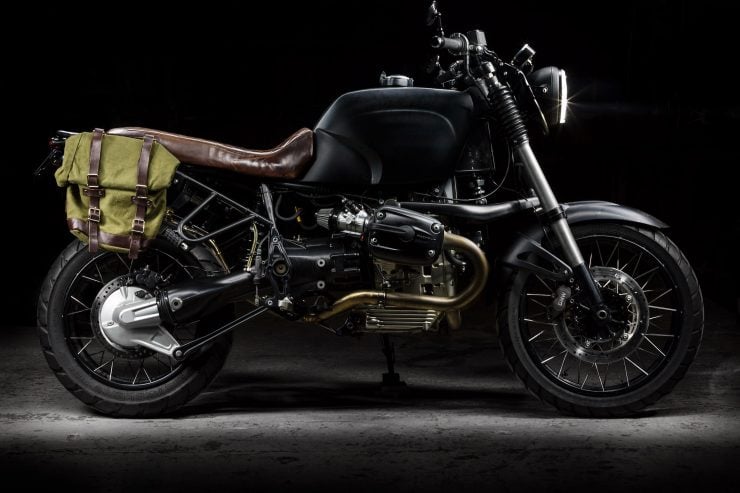 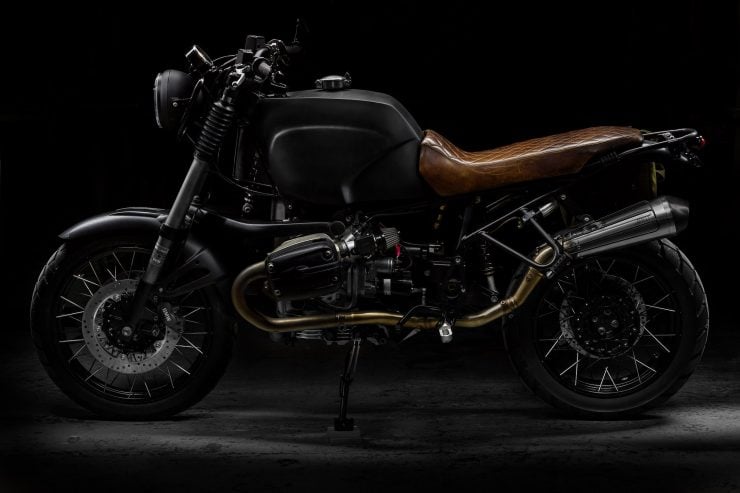 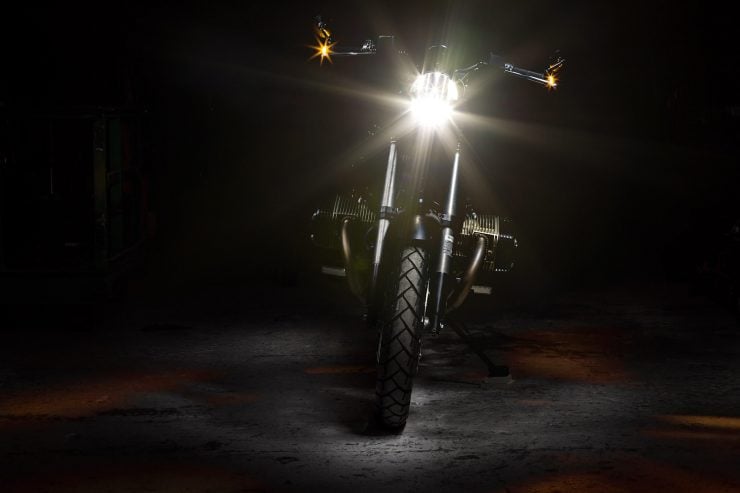 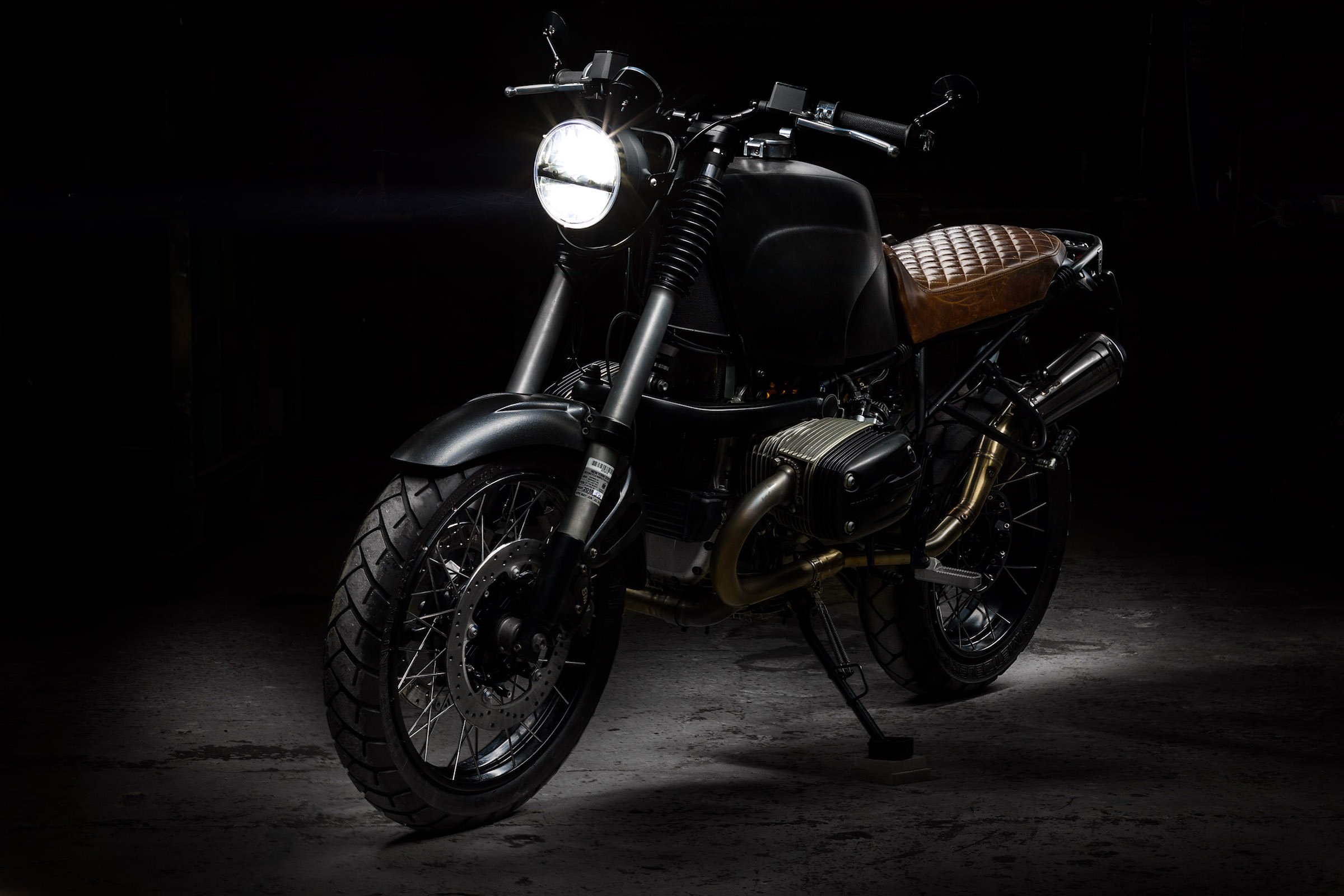