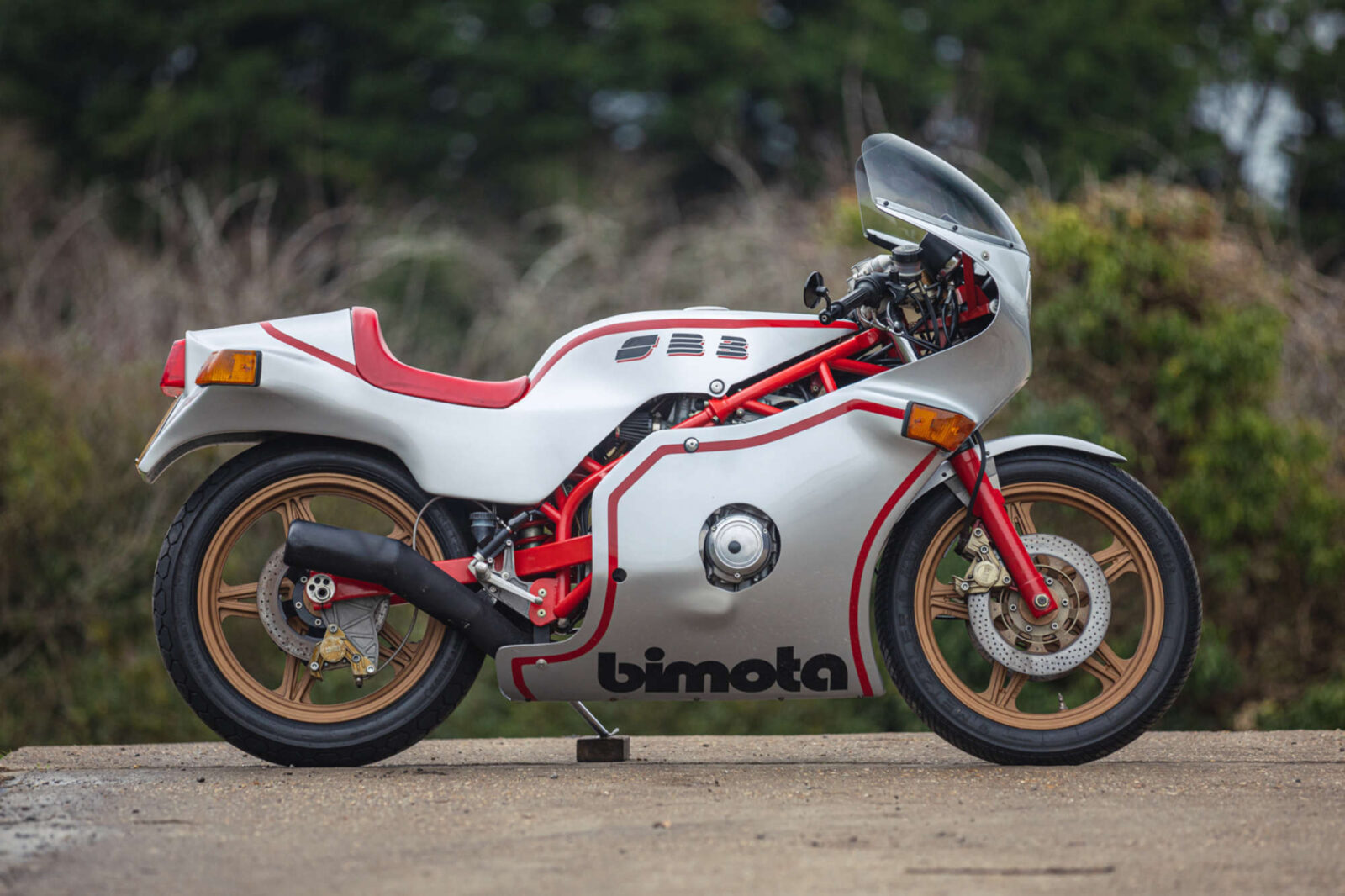 The Bimota SB3 held the top speed record (at the time of its release) for production motorcycles, clocking 149 mph at the Nardò Ring in southern Italy. The SB3 was also one of the most expensive motorcycles of its time, and with just 402 made in total it was exceedingly rare.

Bimota is an Italian motorcycle manufacturer that specializes in wildly innovative motorcycles, it was founded in 1974 by Valerio Bianchi, Giuseppe Morri, and Massimo Tamburini. The company takes its name from the first two letters of each of their surnames linked together – Bianchi Morri Tamburini.

With the release of the Honda CB750 in 1968 Japan had taken the lead in the global superbike race, in fact the very term “superbike” was coined by a magazine reviewer to describe the model.

Despite the advanced and reliable engineering that so often went into Japanese superbike engines of the late 1960s and 1970s they frequently had a glaring Achilles heel – their frames, suspension, and brakes were subpar, and often incapable of properly exploiting the potential of their engines. 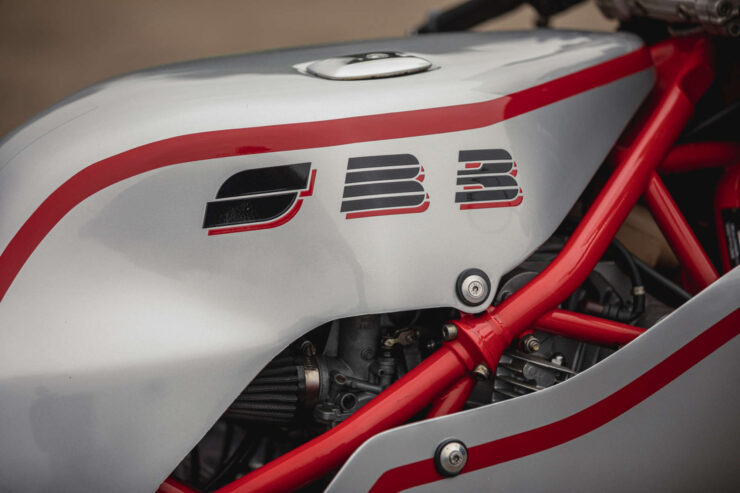 The Bimota SB3 has a chromoly tubular steel trellis frame that wraps around the engine, using it as a stressed member for additional rigidity.

Italian engineering firm Bimota was founded specifically to address this problem. They created advanced frames and fairings which were then paired with high-end suspension and brakes. These would then either be sold as a rolling chassis for the customer to install a Japanese superbike engine into, or the Bimota factory themselves would source the engine and sell the completed motorcycle.

Bimota initially developed rolling chassis for superbike engines from Kawasaki, Honda, and Suzuki. They would later develop motorcycles for Ducati and Yamaha engines, and at one point they developed a motorcycle for supercar manufacturer Lamborghini.

So the Bimota SB3 has a Suzuki engine in a Bimota frame, and it’s the third motorcycle developed by Bimota for Suzuki engines – SB3. 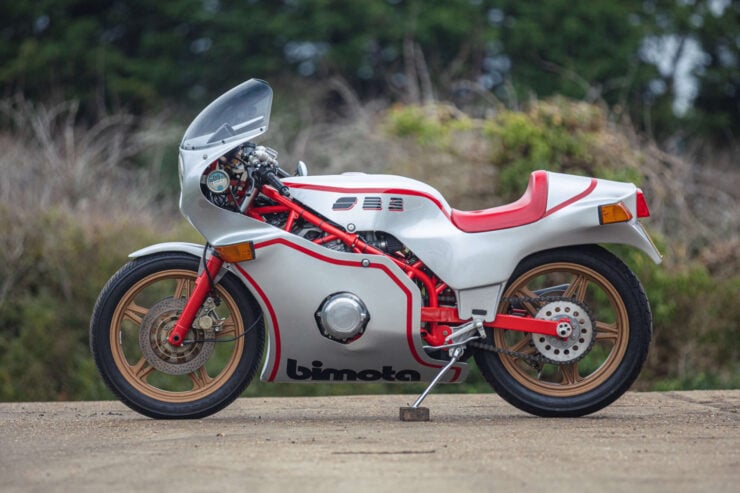 The SB3 was essentially a grand prix motorcycle for the street when it was released. It’s 62 lbs lighter than the Suzuki GS1000 and considerably quicker on track thanks the improved frame, suspension, and brakes.

With its almost 150 mph top speed, the Bimota SB3 was the fastest production motorcycle in the world when it was released, though there has been some contention about the record held by the model as the vast majority of them were actually sold as rolling chassis minus their engines, which needed to be sourced by the buyer from a Suzuki GS1000.

Some have thus argued that they can’t be classified as production bikes as a result, though it’s important to note that at least 66 were built entirely at the factory.

“The SB3 1000 replaced the SB2 750, but also adopted a more conventional look, devoid of those daring ‘solutions’ that so strongly marked the previous model. It was created at the express request of the German market, which at the time accounted for the vast majority of the (Bimota) motorcycles manufactured.”

“Reaching a speed close to 240kph (149mph) on that track at Nardo…it held the absolute top speed record of the period for production motorcycles.” – Bimota, 25 Years of Excellence, Giorgio Sarti. 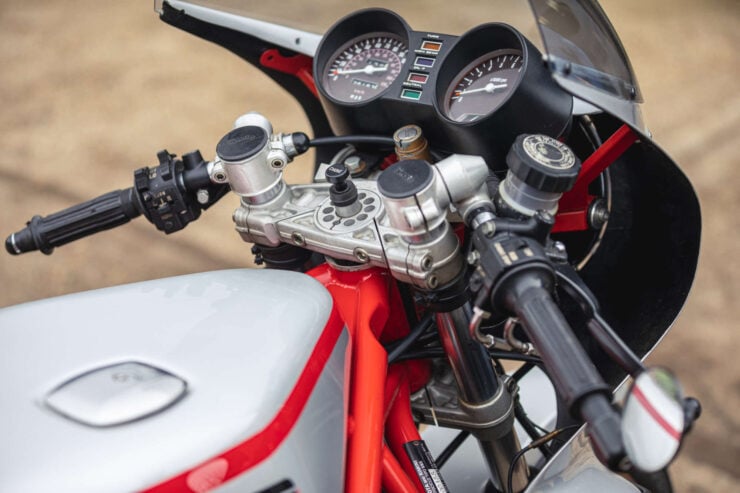 With a top speed of almost 150 mph, the SB3 was the fastest production motorcycle in the world when it was released in 1979. Even by modern standards the bike has excellent handling and performance zº impressive given the fact that it’s over 40 years old.

The Bimota SB3 has a tubular steel trellis frame made from chromoly steel alloy, it has a bespoke aerodynamic fairing, and its frame uses the Suzuki GS1000 engine as a stressed member for added rigidity. The front suspension consists of a pair of 38mm Marzocchi forks, and in the rear there’s a custom monoshock arrangement that was well ahead of its time.

Brakes consist of twin 280mm Brembo discs up front and a matching disc on the back. All-in-all the Bimota SB3 tips the scales at 445 lbs dry, 62 lbs lighter than the 507 lb dry weight of the GS1000.

Thanks to the vastly improved frame, suspension, and brakes the SB3 is considerably quicker around a circuit than the bike originally designed for the same engine. 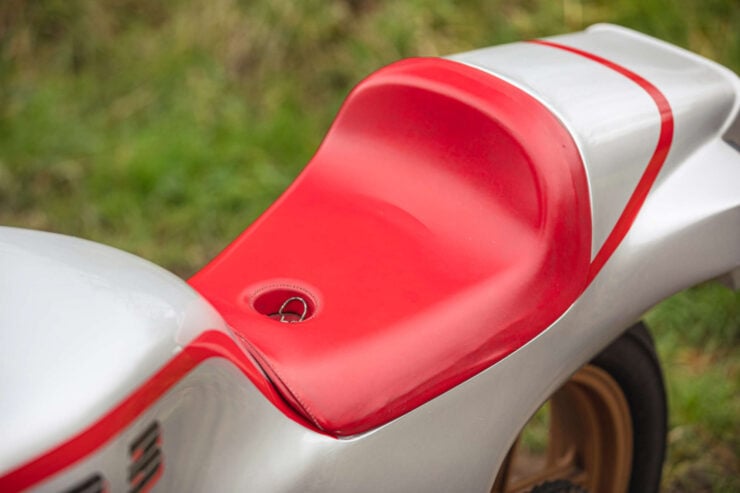 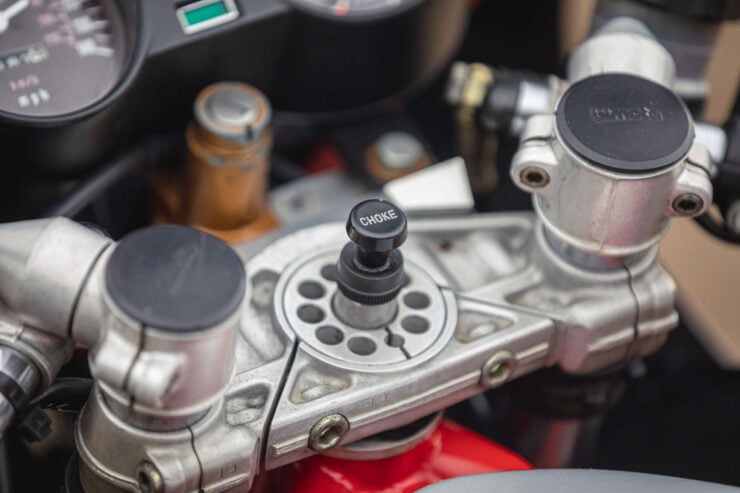 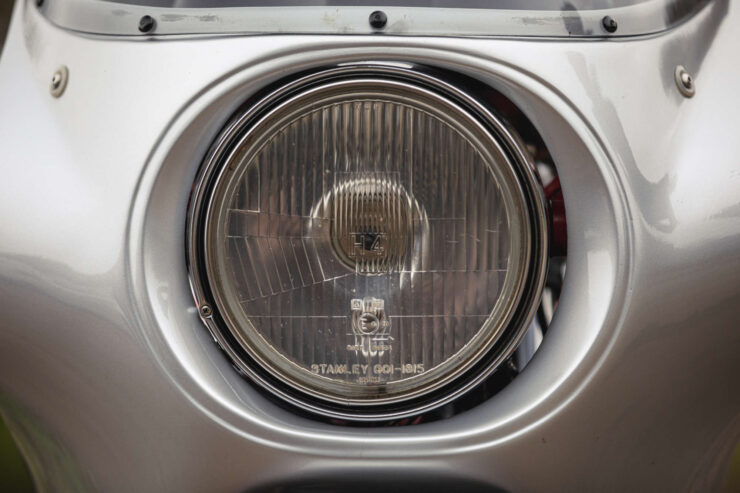 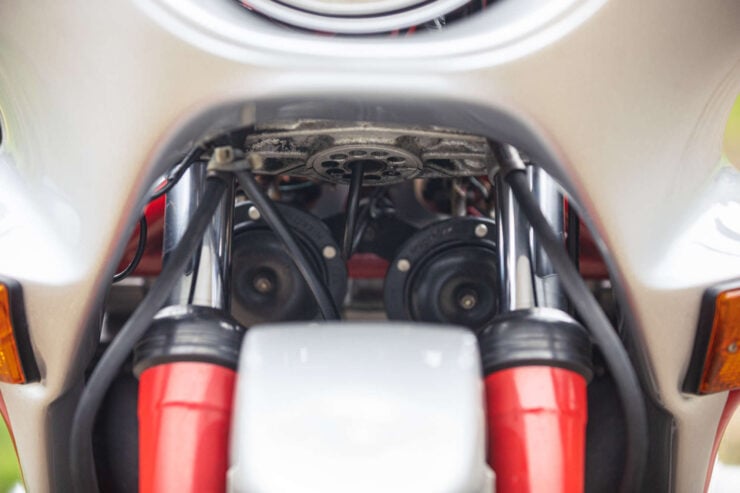 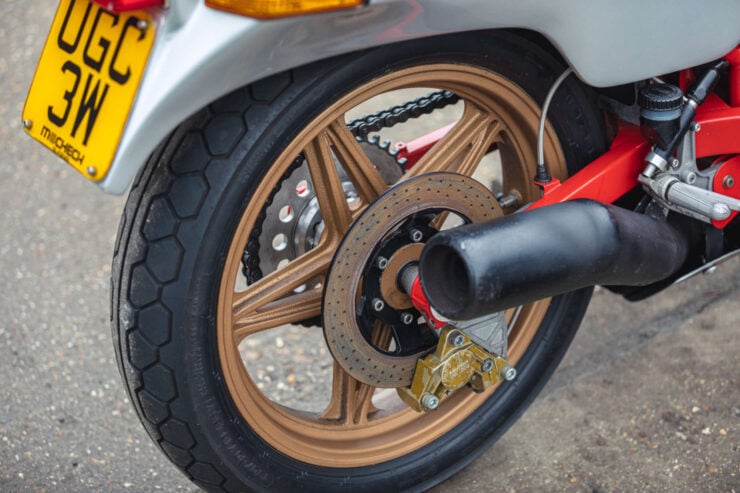 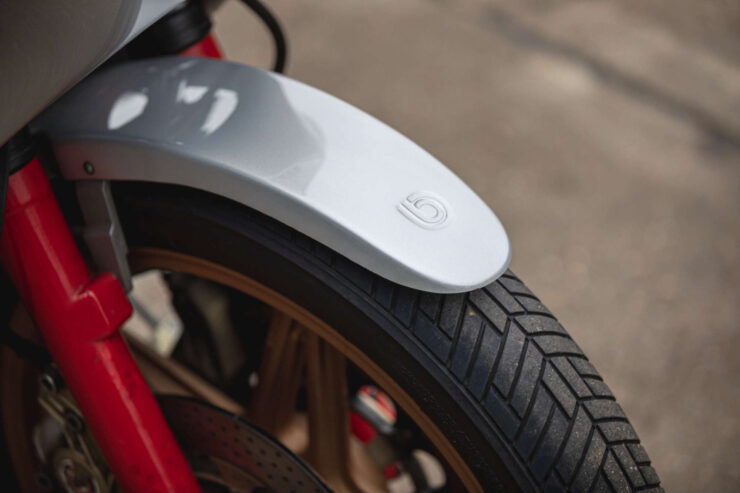 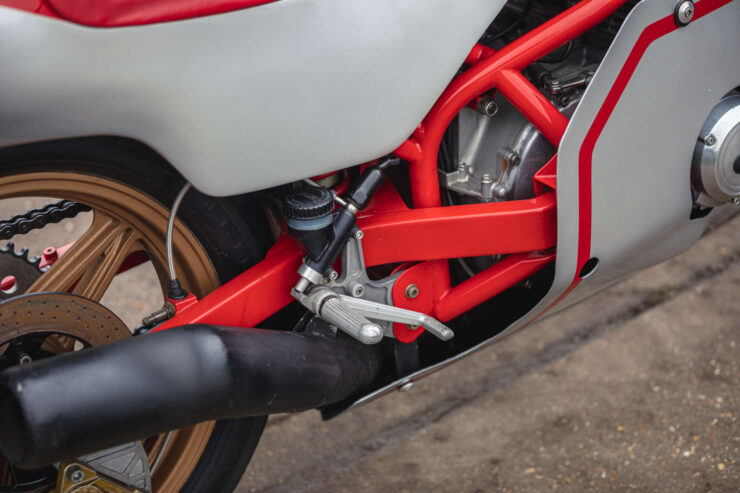 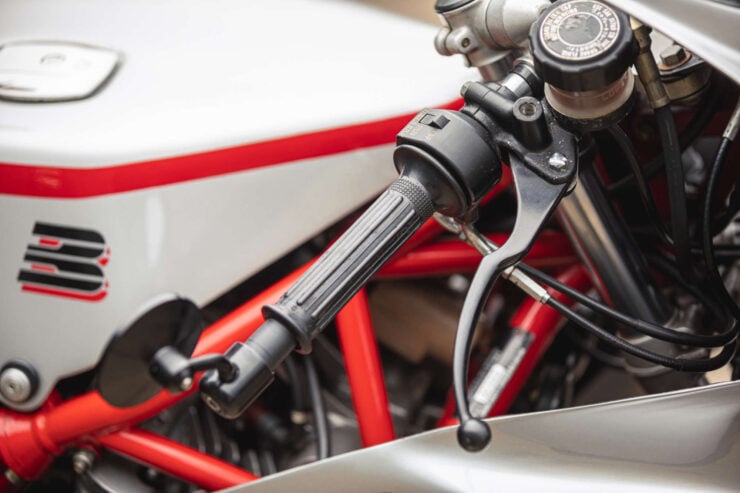 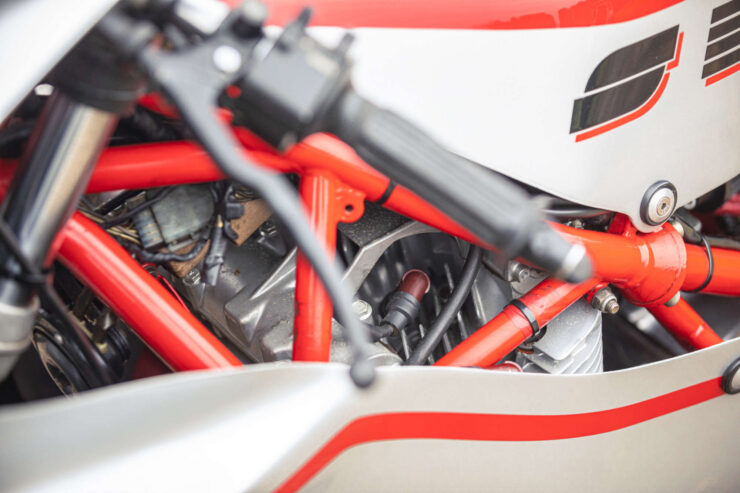 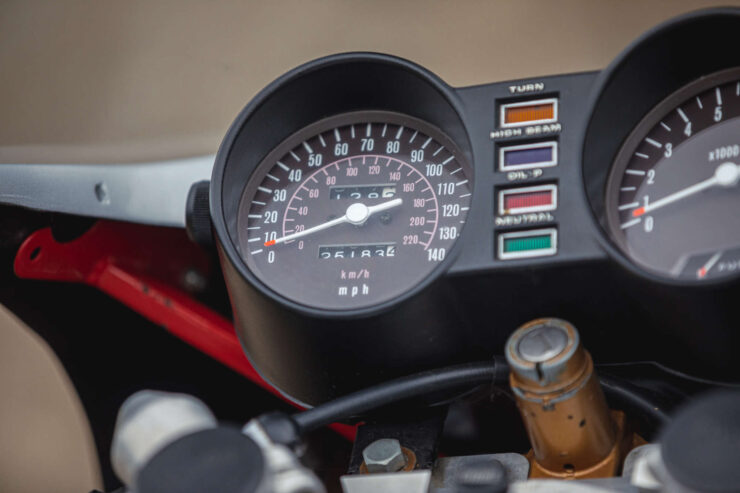 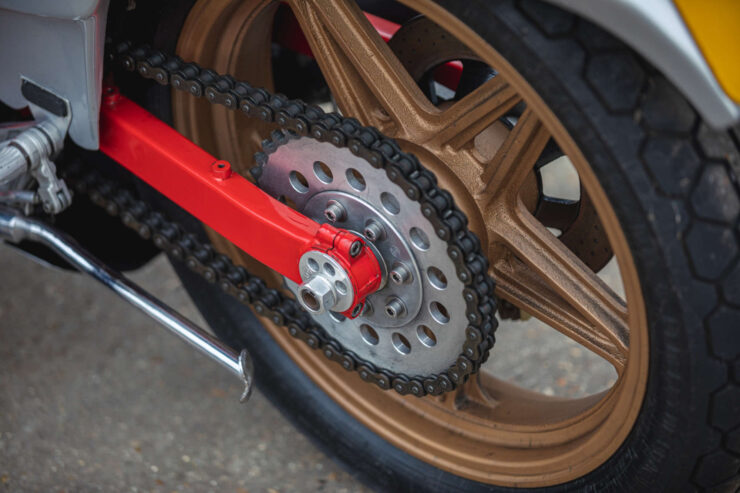