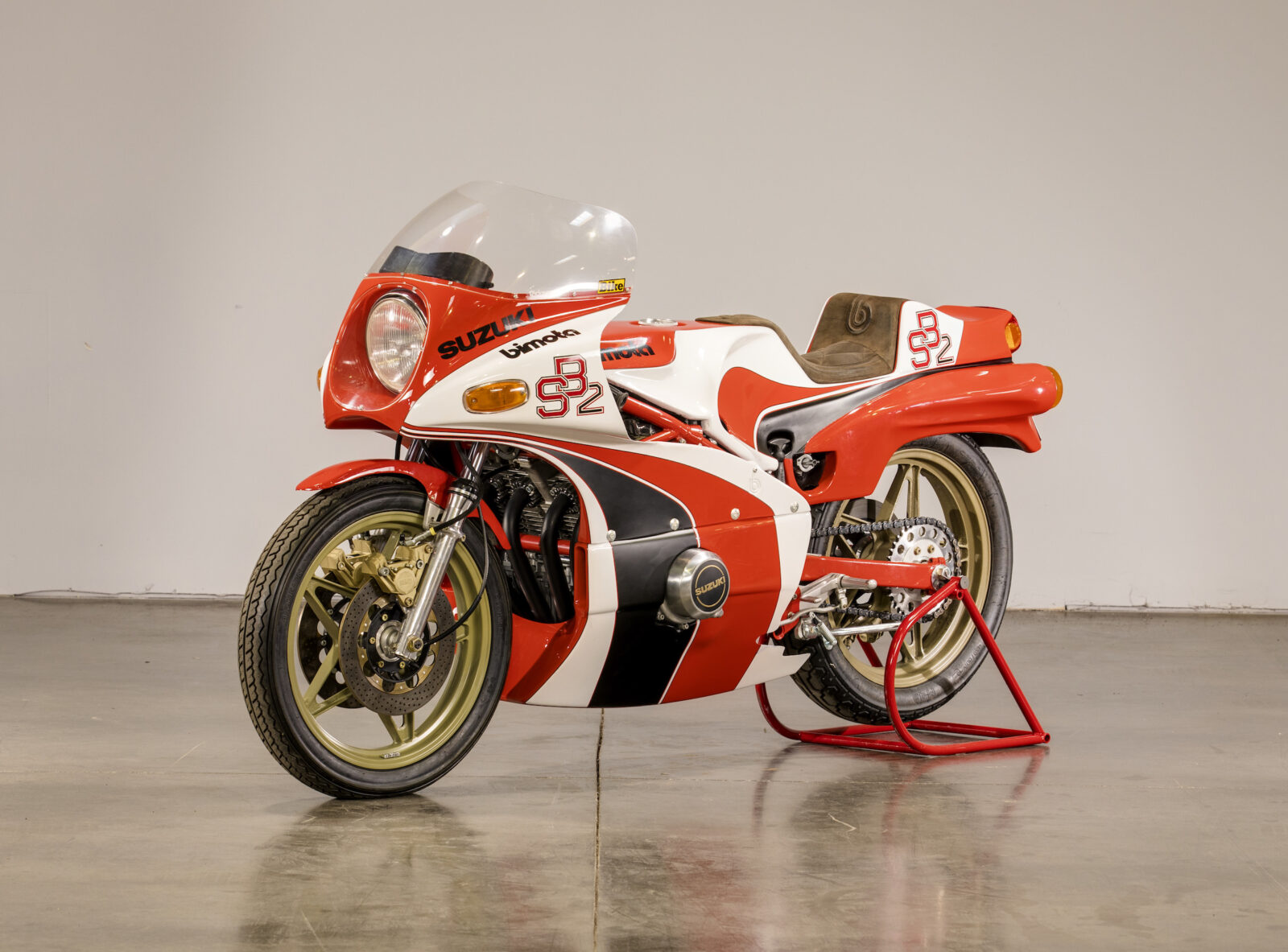 The Bimota SB2 was a significant evolutionary step forward for motorcycles when it was released in 1977. Massimo Tamburini had designed not just a superbike, but the future of superbikes.

His new creation featured an ultra-lightweight chromium molybdenum trellis perimeter frame, a bulletproof Suzuki GS750 DOHC engine that doubled as a stressed member, and handling so good it literally left period road-testers at a loss for words.

The story of the Bimota SB2 cannot be told without first talking a little about Massimo Tamburini, an engineering genius who never went to university, and was unable to graduate from technical school due to illness.

Tamburini started a heating, ventilation, and air conditioning (HVAC) company with Valerio Bianchi and Giuseppe Morri, the men enjoyed some success with the business but their first passion was always motorcycles – this was particularly the case for Tamburini. 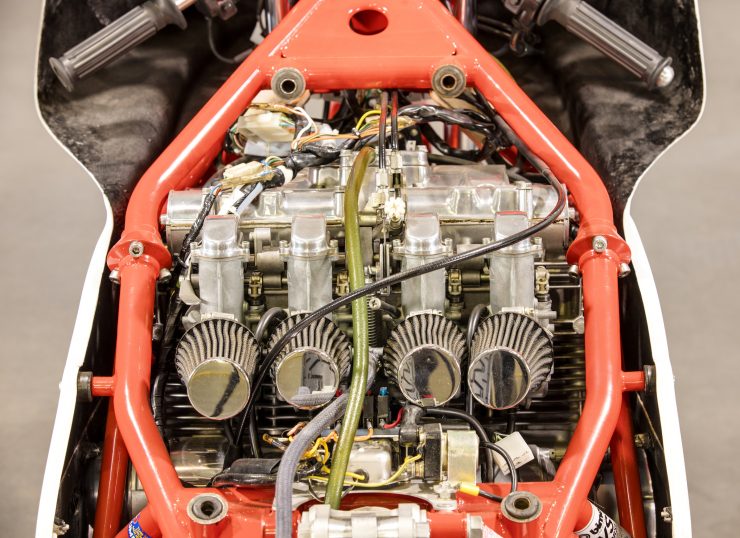 In 1973 the three men founded Bimota – the company name being a portmanteau of the first two letters of each of their surnames – Bianchi, Morri, and Tamburini. They would keep the concept of simple, meaningful names throughout the entire company history – each model was named with the first letter of the motorcycle engine manufacturer, followed by the first letter of their own company, followed by a number denoting the generation. The Bimota SB2 is the Suzuki-Bimota-2, or the second Bimota to be fitted with a Suzuki engine.

“The ideal one would be a 750 with the power of a 1000 and the weight of a 500. You don’t need a huge amount of power on a road bike, but it’s important to have light weight as well.” – Massimo Tamburini describing his own personal philosophy of motorcycle design. 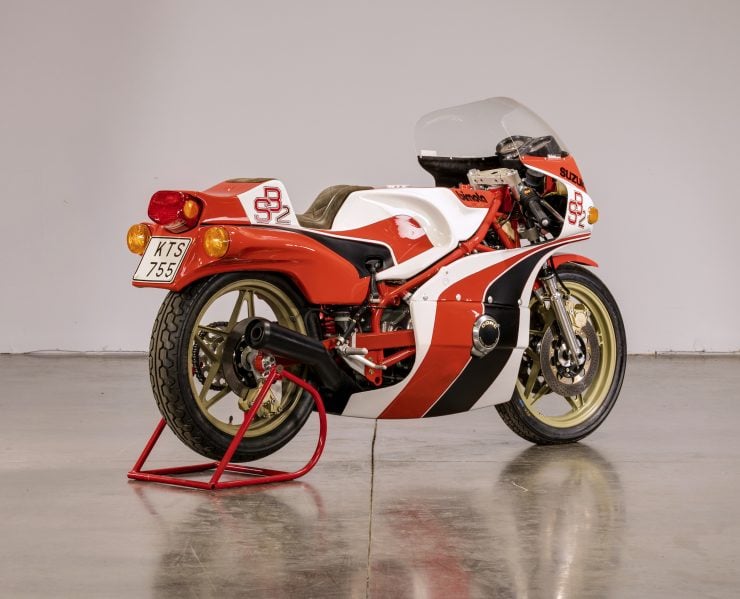 Although Tamburini had been tuning motorcycles for many years, his first full motorcycle build occurred in 1971 when he developed and welded up a new, lightweight frame for an MV Agusta 750 Sport. In the beginning all of Bimota’s motorcycles were designed strictly for racing, and they won a number of World Championships in the mid-1970s.

The first Bimota-Suzuki was the SB1, powered by a 500cc two-stroke engine and intended for racing only. The Bimota SB2 was an entirely different animal, it was a motorbike designed from the ground up to move the game forwards.

Bimota and Suzuki had developed a good working relationship with the SB1 project, so Suzuki bankrolled the SB2 project to build 200 examples of a superbike that would be developed with a cost-is-no-object philosophy, powered by a Suzuki engine. This would be a major marking win over the other three large Japanese motorcycle manufacturers, and more importantly it would give Suzuki access to the design genius of Bimota. 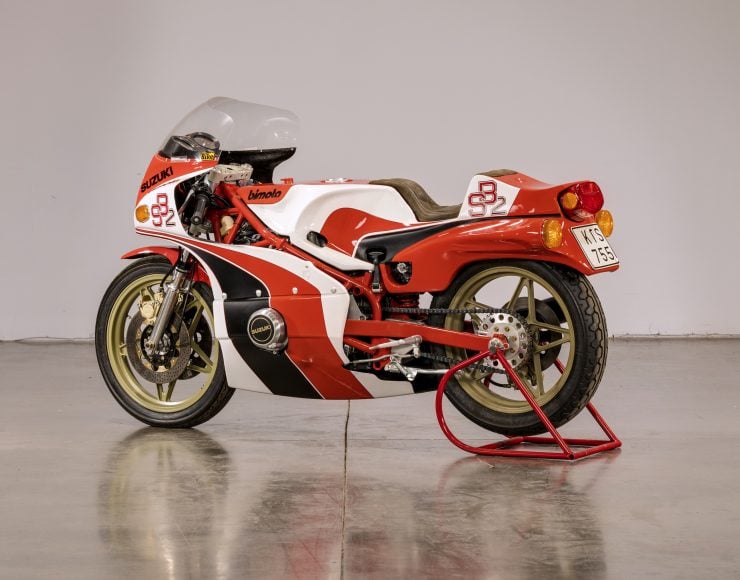 Tamburini started with a blank slate, the only thing the bike absolutely had to have was the Suzuki GS750. He penned a cro-moly trellis perimeter frame that utilized the engine as a stressed-member and directly connected the steering head with the swing-arm pivot point.

The early draft called for the bike to have the exhaust routed up over the engine and out under the seat, with the fuel tank mounted under the engine for optimal weight distribution – but both of these features were too difficult to integrate into a consumer-practical production motorcycle.

The final design prioritized lean angle and handling, the engine was mounted 25mm higher than in the GS750 and the lower section of the bike was kept as narrow as possible. An adjustable rear monoshock was fitted, one of the first motorcycles to do so, and the front end benefitted from 35mm Ceriani forks with modified internals.

A slippery aerodynamic fairing made from a combination of fiberglass and aluminum was developed, and the seat/rear cowl is part of a monocoque load-bearing structure that includes the fuel tank area – there is no subframe and the entire rear end can be quickly lifted off to give access to the carburetors. 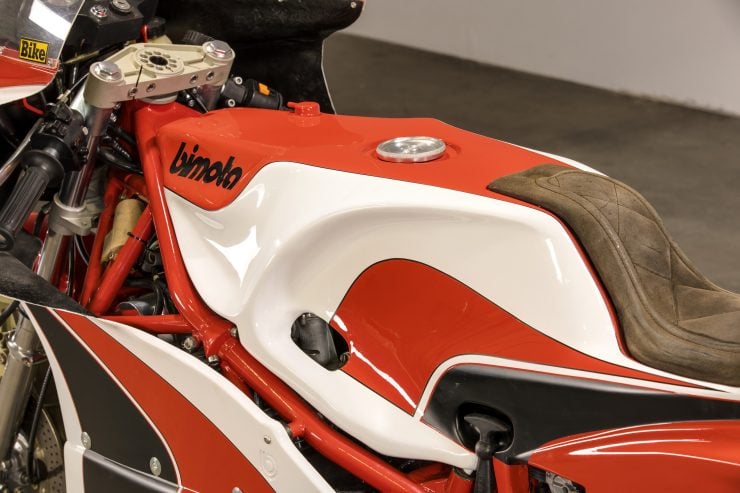 Braking is handled by twin 280mm discs upfront with a single 260mm disc in the rear, the gearbox is the stock Suzuki 5-speed unit, and the engine breathes through a set of four 29mm Mikuni carburetors.

Bimota offered a number of options when ordering your SB2, you could order a rolling chassis or a complete motorcycle, they also offered the option of boring the engine out to 850cc and using high-compression pistons, a road and track camshaft, racing valve springs, a ported cylinder head – offering up to 100 bhp. A significant increase over the stock engine’s 75 bhp and 42 ft lbs of torque.

Though sales weren’t exactly brisk and just 140 or so were made, the real contribution that the SB2 made to the world of motorcycles and superbikes in particular wasn’t sales volume – it was engineering brilliance. Concepts tested on the SB2 would become commonplace on almost all future superbikes, including perimeter frames, monoshocks, monocoque rear ends, and design to allow much higher lean angles that had been possible previously. 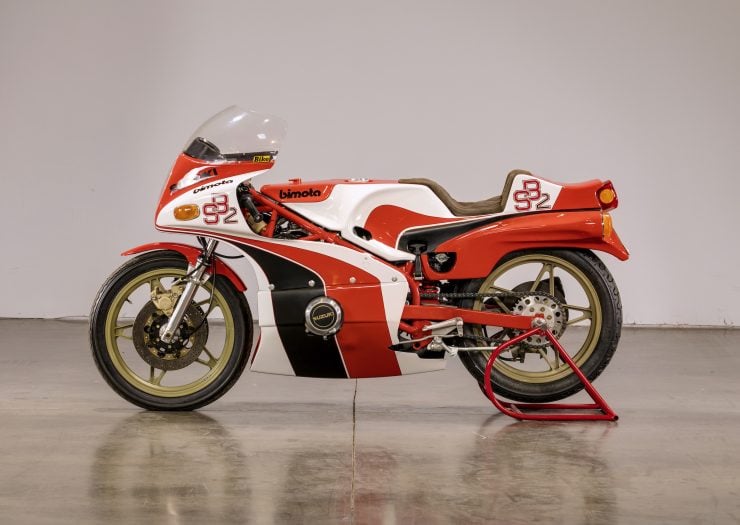 The SB2 you see here is a very rare all-original example that hasn’t been ridden since 1984 – making it one of the best preserved examples we’ve seen in recent memory.

A comprehensive restoration was undertaken in 2012 to bring it back to original condition and clear away decades of dust. The bike is now presented in showroom condition right down to the suede leather seat.

Mecum are due to offer it for auction in Las Vegas in late January, if you’d like to read more about it or register to bid you can click here to visit the listing. 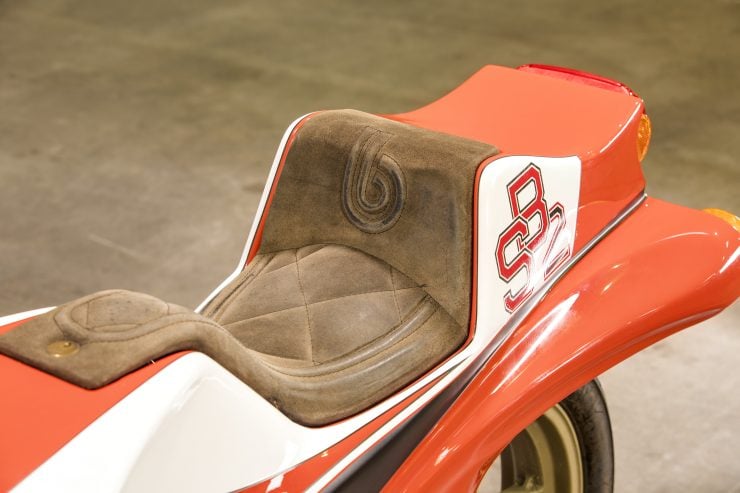 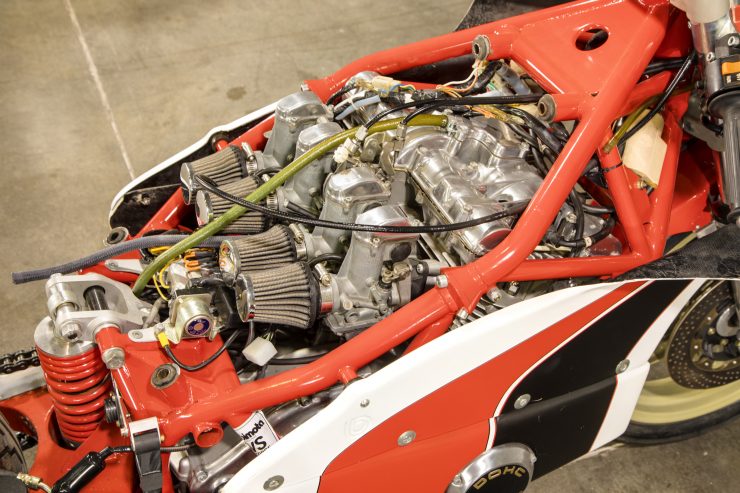 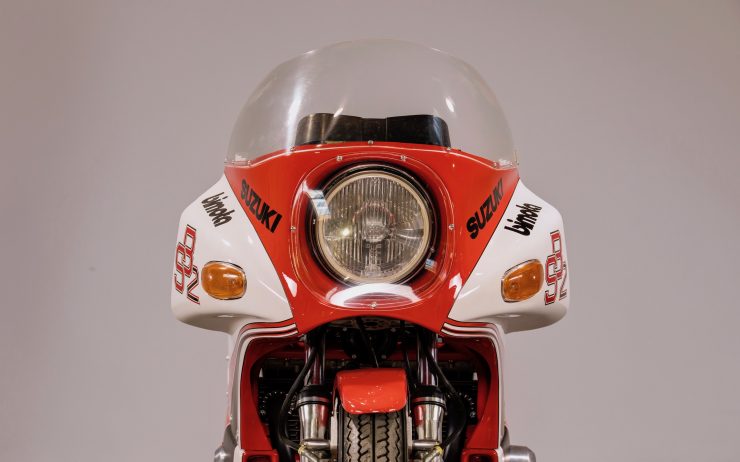 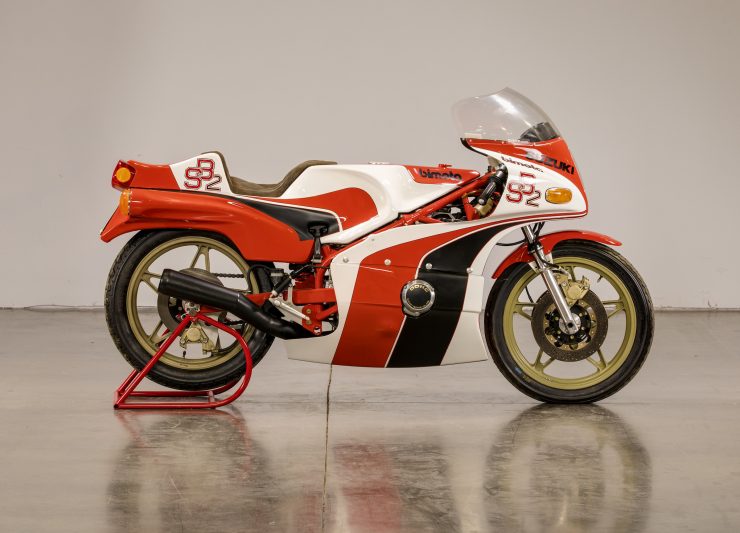 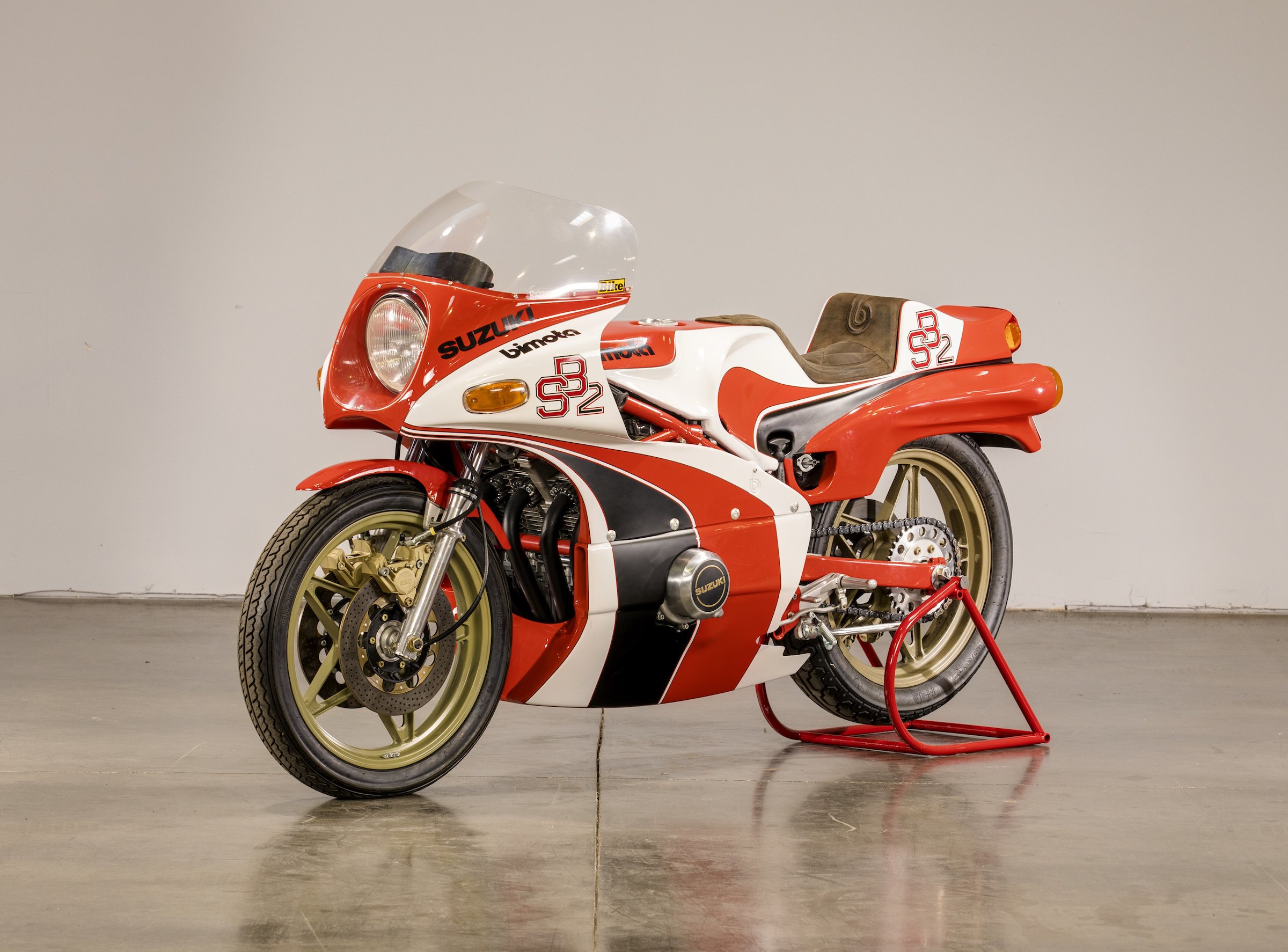