Throughout the history of the sport of motor rallying the Group B era stands out as the most dramatic, the most gut wrenching motorsport ever invented.

Some have referred to the Group B era as the “Golden Age of Rallying”, and perhaps it was. It was perhaps the closest thing in motor rallying to the mortal combat of the gladiators of Roman times.

The Mighty Group B Era

The Group B era was active from 1982 until 1986 when, after a series of horrific accidents which included driver and spectator deaths, the FIA decided to end it. The technology of the rally cars had arguably reached the point where the car was capable of more than a human driver could reliably and safely manage, especially when trying to go flat out and avoid uncontrolled spectators, many of whom seemed determined to act like human lemmings.

Above Video: You can catch a glimpse of the atmosphere of Group B rallying in 1985 in this video clip by Duke Video.

Group B was created by the FIA (Fédération Internationale de l’Automobile – the governing body for many motorsport events including Formula 1) back in 1982. The idea behind it was to provide some flexibility in a set of motorsport competition rules that would allow manufacturers room for creativity.

To this end homologation rules were made far less demanding with manufacturers only required to make 200 of a type of car to enter them in Group B: and also providing a requirement that only 10% of that total needed to be actually made for each competition year. So manufacturers only had to produce 20 of these cars per year.

These rules provided safety standards for roll cages etc, but permitted cars to be much more powerful than had otherwise been the case.

Manufacturers embraced the new rules, and all the creative potential they unleashed, with Audi, Lancia, and Peugeot particularly getting into the spirit of it.

German car maker Audi embraced the idea that, for a rally car which will have to navigate often unsealed roads at prodigious speeds, that four wheel drive would be a great advantage. This was not going to be easy to engineer, but Germans, especially the ones at Audi, have a deserved reputation for excellence, and so they set about creating a four wheel drive system that would be excellent for both asphalt and dirt.

Four wheel drive cars were not permitted in FIA rallying at that point but in 1979 Audi approached the FIA to lobby to have it permitted, the FIA agreed and so permission for these cars was included in the revised rules beginning in 1980. Volkswagen entered a team of Iltis in the 1980 Paris-Dakar Rally and managed a startling 1st, 2nd, 4th, and 9th finish. 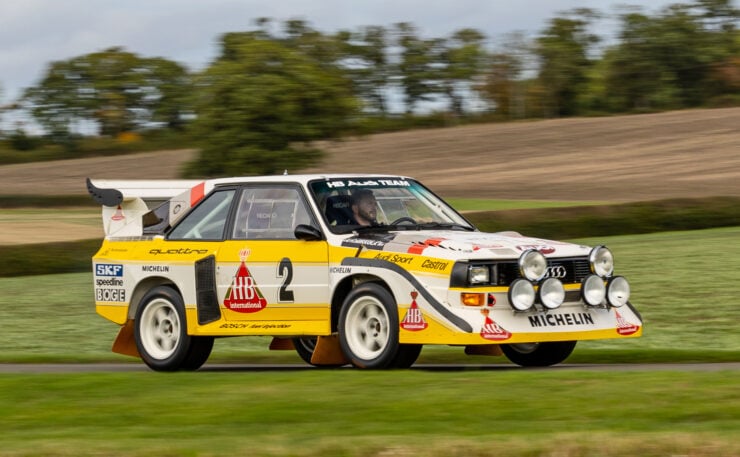 Audi had developed the quattro in the years before Group B was invented: the cars first appearing in 1980 as production cars for road use, with the plan to use them in rallying. The original idea to create this full time four wheel drive car came from Audi engineer Jörg Bensinger who realized that the four wheel drive Volkswagen Iltis (used by the German military) was capable of great roadholding on mud and snow.

The Iltis was of course not unique, for example the four wheel drive Ford Bronco had also proved the concept when they were entered in such motorsport events as the Baja 1000 back in the 1960’s.

Audi’s engineers based their new constant four wheel drive transmission on the Volkswagen Iltis system and fitted it into a modified Audi 80 with a longer wheelbase. The power unit was the five cylinder turbocharged engine that would later find its way into the Audi 200.

The system was christened the “Ur-Quattro” (i.e. original Quattro): and it made its rally debut in the 1980 Jänner Rallye in Austria, all “quattro” cars that followed would use a lower case “q” out of deference to the original car.

The following year, 1981, French driver Michèle Mouton made history when she drove an Audi quattro to win a World Championship rally, the Rallye Sanremo in Italy. The quattro concept had proven itself and the process of refining and improving it lay ahead.

These first Audi quattro cars were the A1 and A2 which were based on the regular production Audi quattro models on sale in Volkswagen/Audi dealerships. These cars in rally trim were homologated in Group 4 for the 1981 competition season and what then proceeded was a “trial by fire” with drivers battling to manage the front-heavy weight distribution combined with the turbocharged inline five cylinder engine sending 350 hp to the wheels.

Added to the handling issues were reliability issues with failures in the mission-critical centre differential being particularly difficult to deal with, the repair teams would often not try to repair the faulty differential but simply disconnect it. This was not a wonderful solution to the problem as the driver then had to contend with the front heavy car without the benefit of the rear wheels being driven. 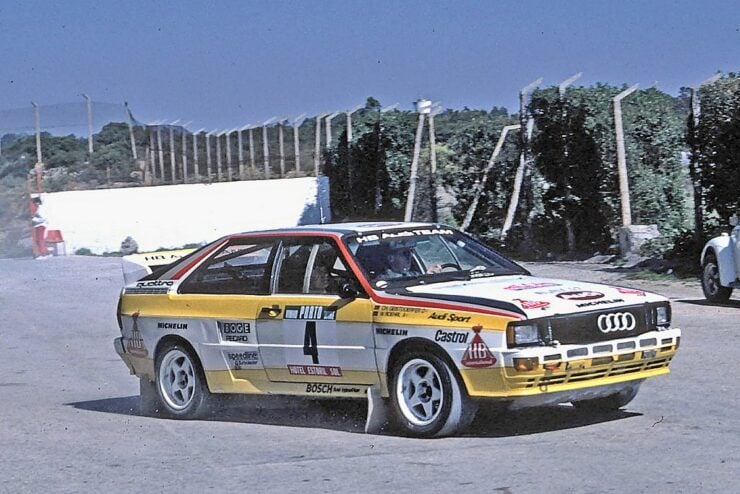 Despite the challenges Audi finished up in fifth place in that year’s World Rally Championships which showed the promise of the quattro concept, making the blood, sweat, tears and frustration generated by the technology worth it, for the lessons learned were to be applied to perfecting the technology – something that would go on to transform and re-define the rally car.

In 1982 with the introduction of Group B Audi continued with the A1 and then A2 quattro, winning three world rallies in 1983 and five in 1984 with these cars.

In 1984 the product of Audi’s engineering evaluation and research led to the creation of the Audi Sport quattro S2 built on a much revised design. The car was powered by a DOHC double valve (i.e. four valves per cylinder) 2,133 cc (2.1 litre) version of the Audi inline five cylinder engine. The fuel was fed into the engine by a Bosch LH Jetronic fuel injection system combined with a KKK K7 turbocharger. In Group B competition form this engine churned out a respectable 444 hp.

In order to improve the power to weight ratio the competition car’s body shells were made of carbon-kevlar with one inch wider wheels (from 8 inch to 9 inch) and tyres, and extended wheel arches to make room for them.

On the request of the drivers the windscreen rake was steepened to reduce internal reflections from the dashboard, and, oddly given the front heavy handling of the car, a 12.6 inch shorter wheelbase.

This nippy little bobtail of a car was used by Michèle Mouton in her assault on the 1985 Pikes Peak International Hill Climb. Mouton won the event, becoming the first woman to do so, and set a new record in the process.

The quattro S1 E2 car for Group B competition was based on the S1 but treated to significant aerodynamic body improvements, and to a significant boost in power. The aerodynamic improvements included very characteristic air-dam and wing at the front and a wing at the rear. These were installed to greatly improve the downforce acting on the car to make it as stable as possible both for high speed and cornering force.

The boost in power for the S1 E2 Group B car in part came from revisions to the turbocharging system. The 2,110 cc engine used a recirculating air system in the turbocharger to reduce the turbocharger lag, making the engine’s response much more immediate.  The claimed power output of the engine was 473 hp while the actual figure was around 493 hp @ 8,000 rpm and that progressively increased until it was more like 550 hp, at which point the S1 E2 could project itself from standing to 100 mph in a neck muscle straining 8.9 seconds.

The weight of the car was reduced down to 1,090 kg (2,403 lb) and so the performance improved, standing to 60 mph was accomplished in 3.1 seconds. No doubt the aerodynamic wings caused some additional wind resistance but the increase in power would have compensated for that nicely.

The front to rear balance was also much improved with the relocation of the radiator and fans to the rear, and by the large rear wing which generated a welcome aerodynamic down-force to better balance the car.

1986 was the last year of Group B competition and after that those few Group B quattro S1 E2 competition cars were sold off to collectors and to those wanting cars for other kinds of competition. Of the twenty S1 E2 cars made fifteen are known to still exist. Only six actually competed in World Rally Championship events, and of those six just four are in the possession of private enthusiasts.

Chassis #RE10 is one of those cars. First registered as IN-NP 31 in Ingolstadt on 5th November 1985 this car was assigned to former World Rally Champion Hannu Mikkola and Arnie Hertz for the 1985 Lombard RAC Rally. The car began to lead from SS14 but in SS22 suffered an engine failure which put it out of the competition.

This car is coming up for sale by RM Sotheby’s at their Gran Turismo Collection, the sale to be held in Marlborough House, London, UK, on 5th November 2022 – the 37th Anniversary of the car’s first registration. You will find the sale page with more information here.