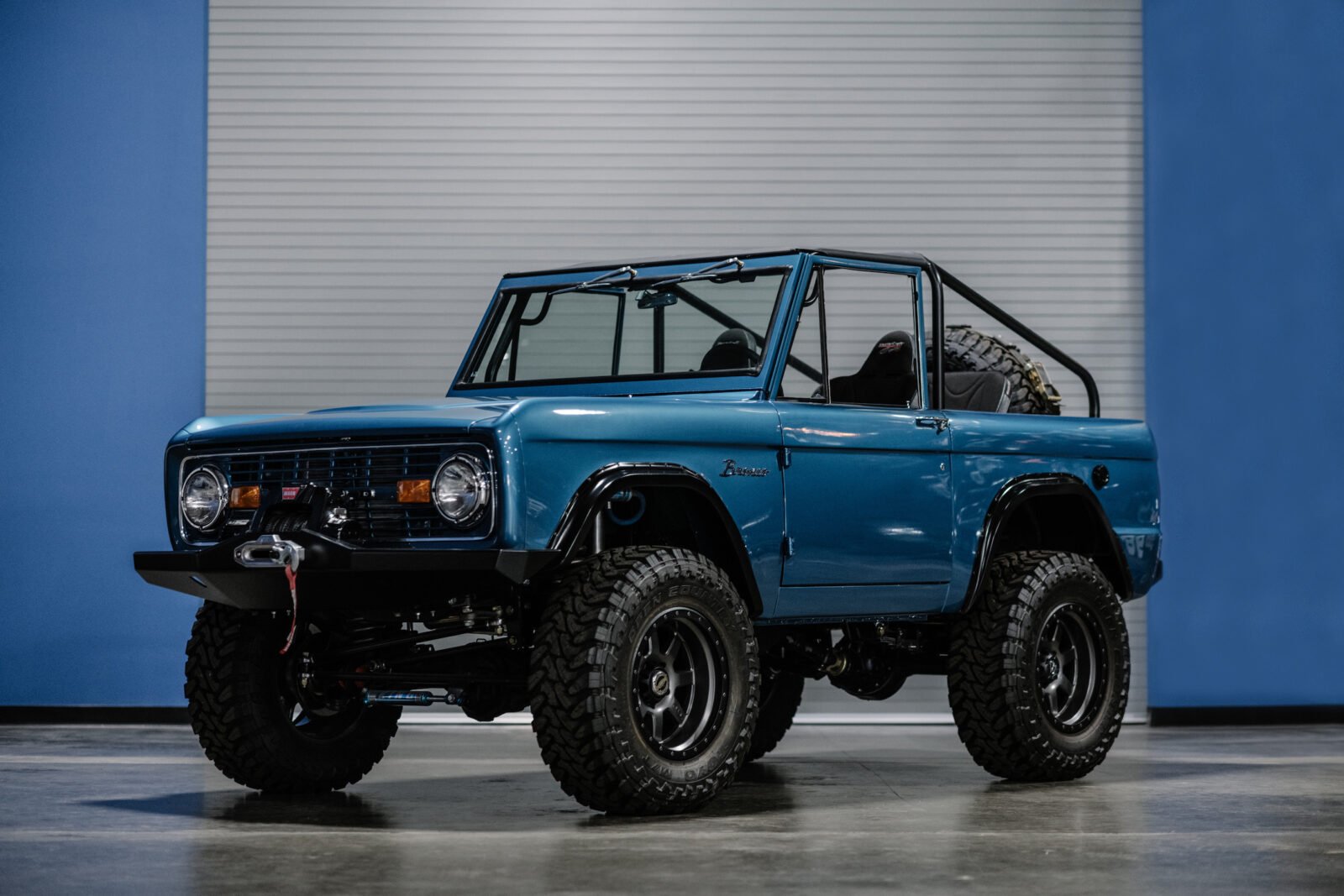 The original Ford Bronco is one of the most important and beloved American 4x4s of its era, in more recent years it’s become common to see restomodded examples of the Bronco – vehicles that keep the simple charm of the original but add more modern engines, suspension, brakes, as well as more comfortable interiors.

The Bronco you see here is one of the most extensively modified examples we’ve ever featured on Silodrome, and it’s going to provide the newly released 2021 Bronco with a run for its money.

This vehicle was built to a specification laid out by a collector of Shelby automobiles, as such it was fitted with a 421 hp 331 cu. in. Ford V8 built by the Carroll Shelby Engine Company, feeding power back through a 5-speed transmission and transfer case to both the front and rear axles.

The Ford Bronco was originally developed to compete with the Jeep and the International Harvester Scout, both of these 4x4s had proven to be strong sellers to the civilian market, and an entire industry of weekend off-roaders was springing up across the United States. 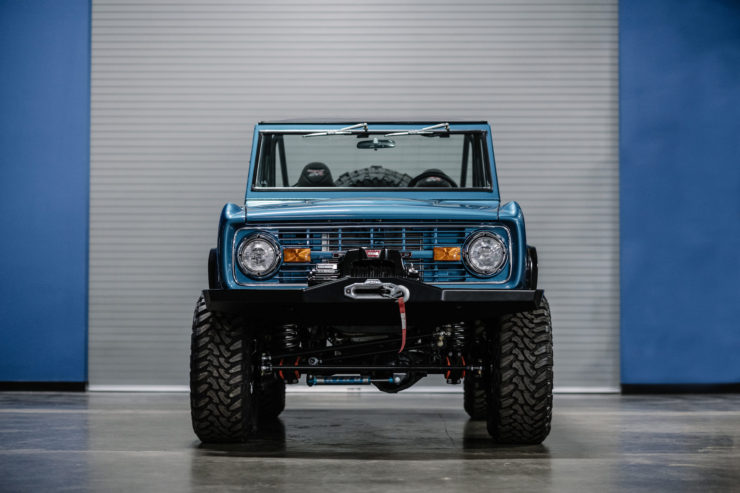 Ford kept the Bronco as simple as possible, not dissimilar to the Scout in many ways. As with almost all four-wheel drives of the era it uses body-on-frame construction with live axles front and rear, a front mounted engine and a centrally mounted gearbox and transfer case to send power to the differentials.

Interestingly the Ford Bronco was conceived by the same man who had struck upon the idea for the original Ford Mustang – Ford product manager Donald N. Frey. The Bronco engineering team was led by the appropriately named Ford engineer Paul G. Axelrad, and it was approved by production by the great Lee Iacocca.

In much the same way that the Mustang had become a runaway success the Bronco became one of the best selling four-wheel drives of its time. It was incrementally updated by Ford over the course of its 1966 to 1977 production run.

Today these early first generation Broncos are by far the most valuable of all the Bronco models and when Ford set about creating an all new 2021 Bronco they based it closely on the styling of the original. 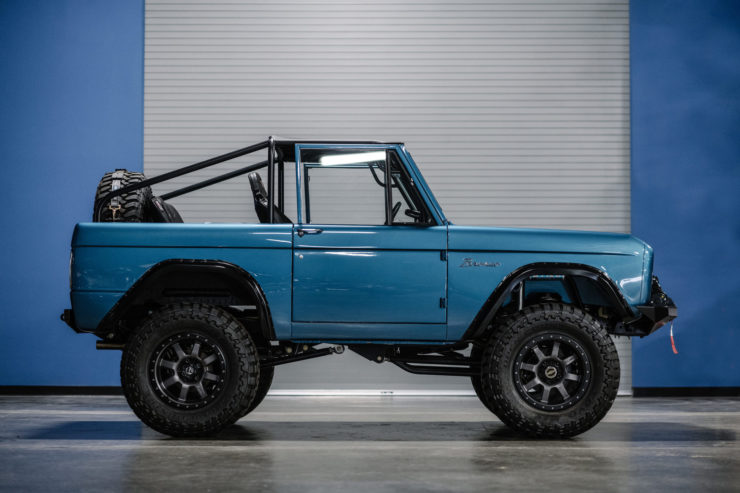 As mentioned above this Bronco has been extensively rebuilt to accompany the other vehicles in a Shelby car collection – so it’s been fitted with a highly-modified 421 hp 331 cu. in. Ford V8 built by the Carroll Shelby Engine Company.

This engine is topped with a Holley four-barrel carburettor, it sends power back through a 5-speed manual transmission and a four-wheel-drive transfer case that sends power to the front and rear wheels.

During the rebuild no aspect of this Bronco was left untouched, it now rides on chunky tires fitted to bead-locker Fuelie wheels and it has heavy duty off-road suspension. Inside the vehicle you’ll find a digital dash gauge cluster, a tilt steering column, and MasterCraft Baja RS Safety seats.

To help get you out of trouble it’s fitted with an electric Warn winch, it’s finished in a Shelby-influenced blue, and it has fewer than 300 miles on the odometer since it was built.

If you’d like to read more about this Bronco or register to bid you can click here to visit the listing on RM Sotheby’s. 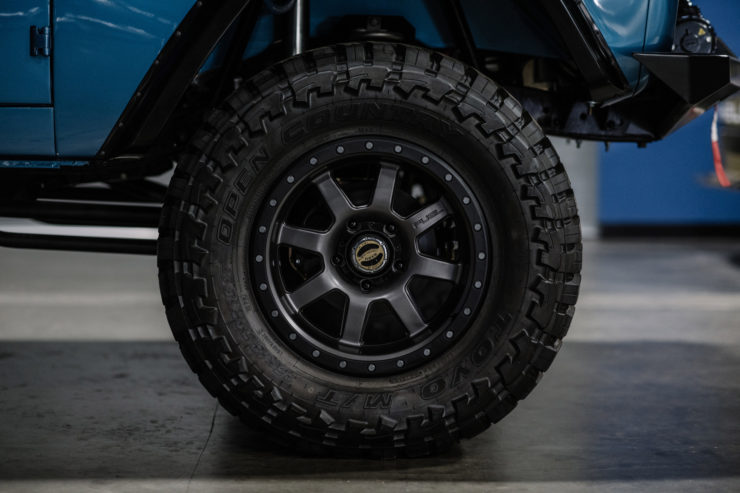 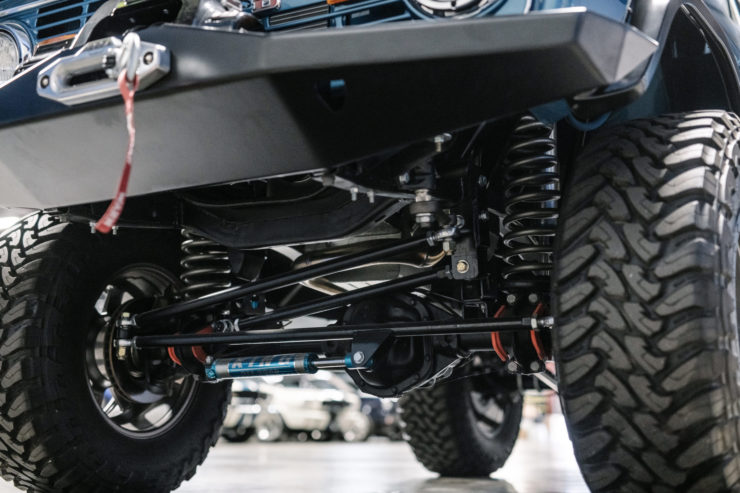 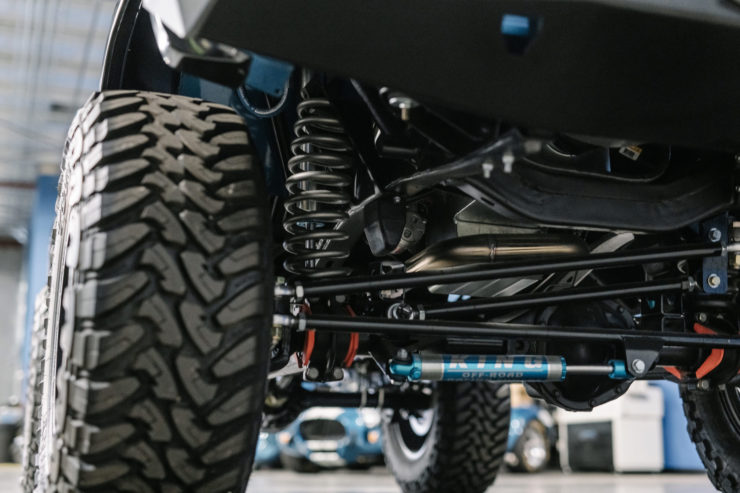 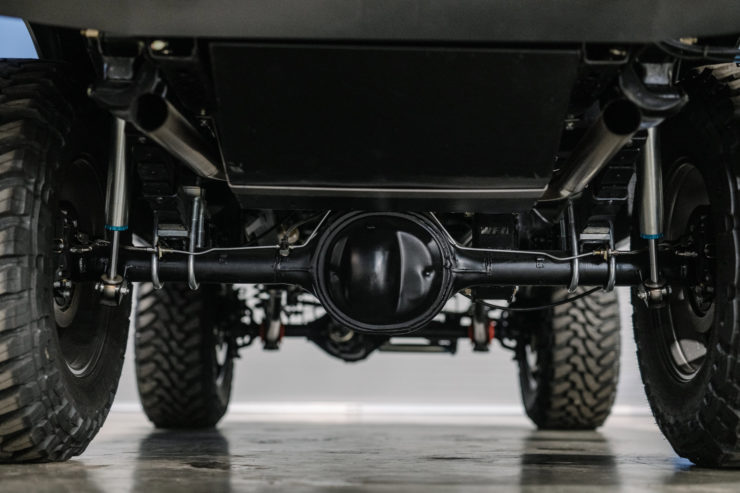 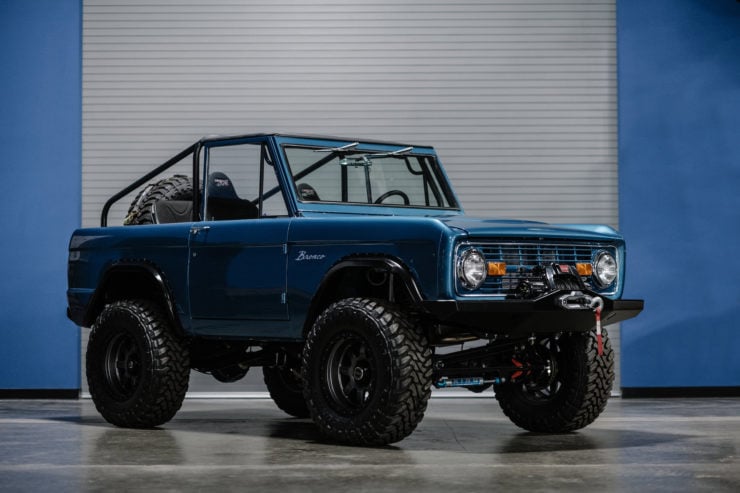 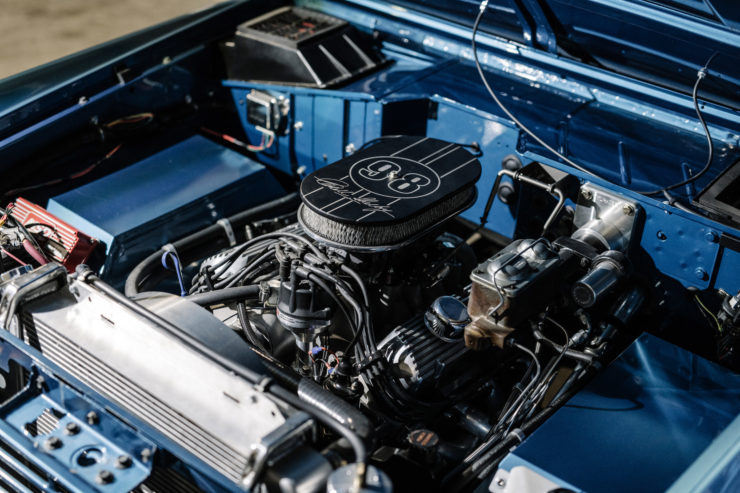 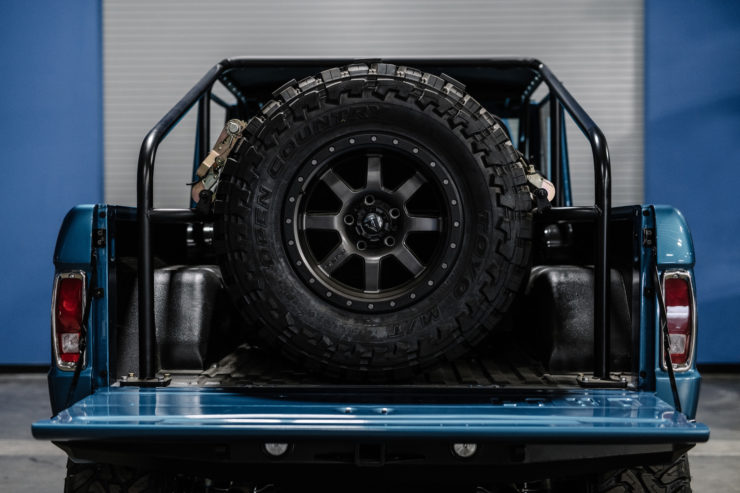 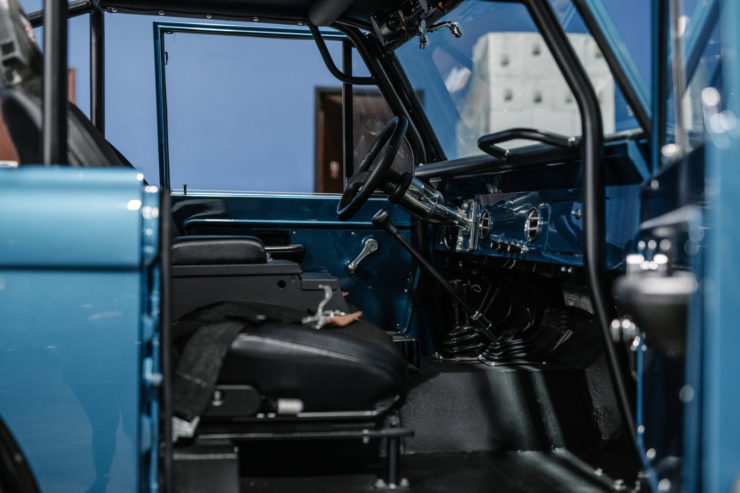 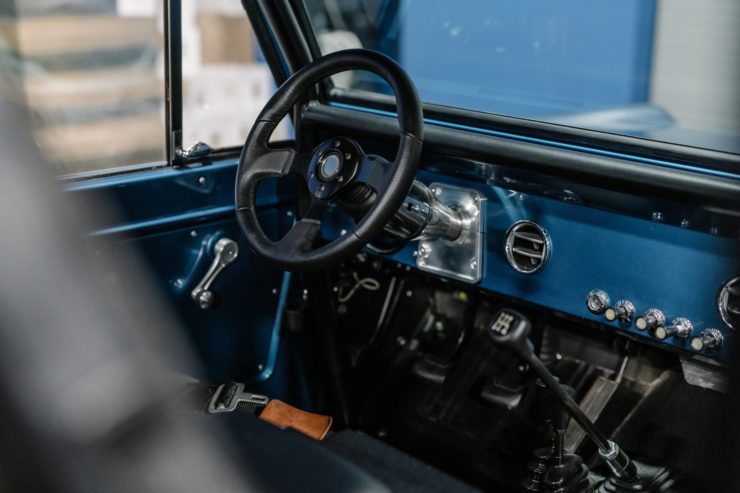 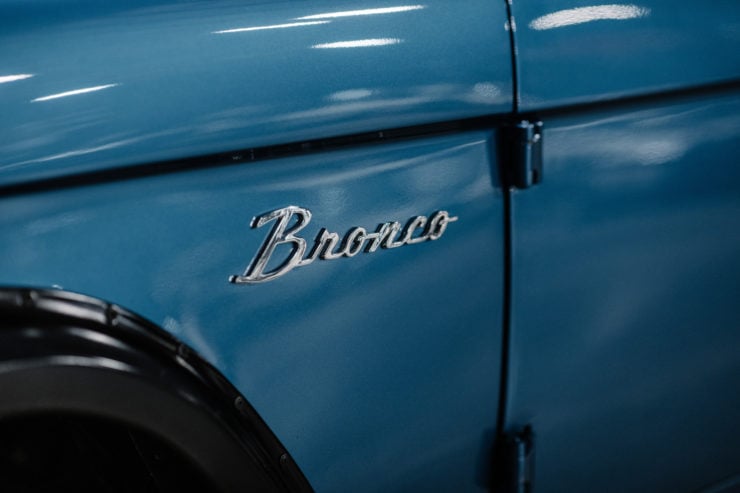 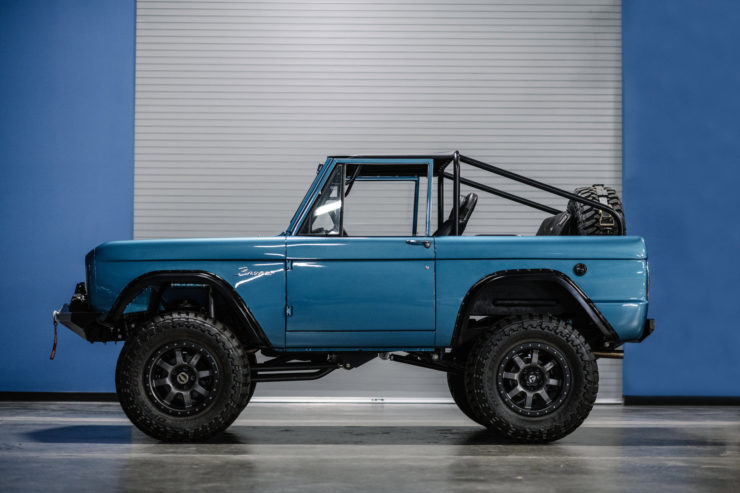 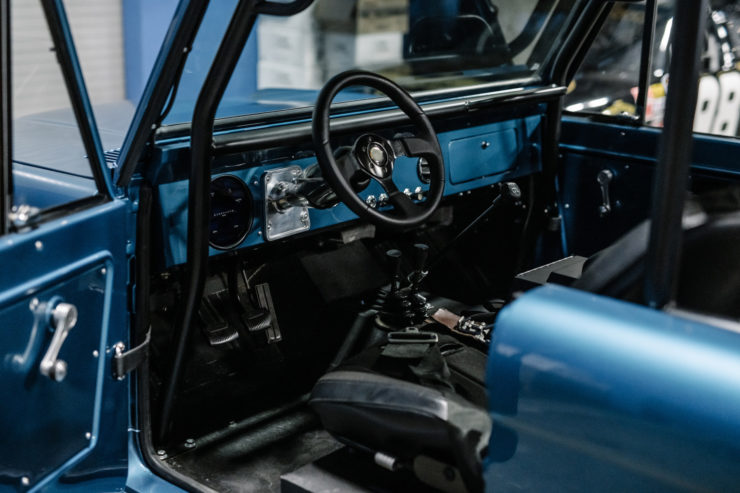 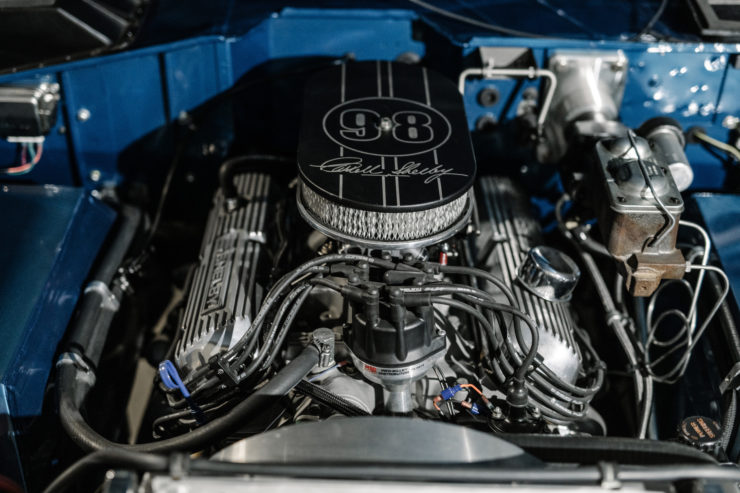 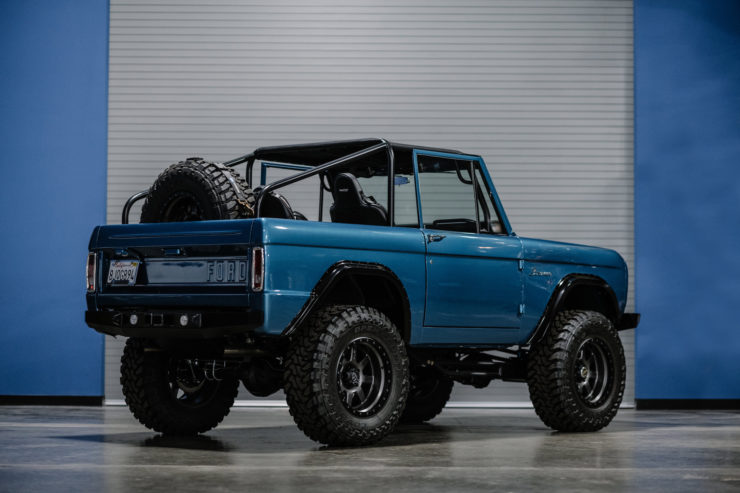