A Garage On Your Wall – The Automotive Art Of Arthur Schening 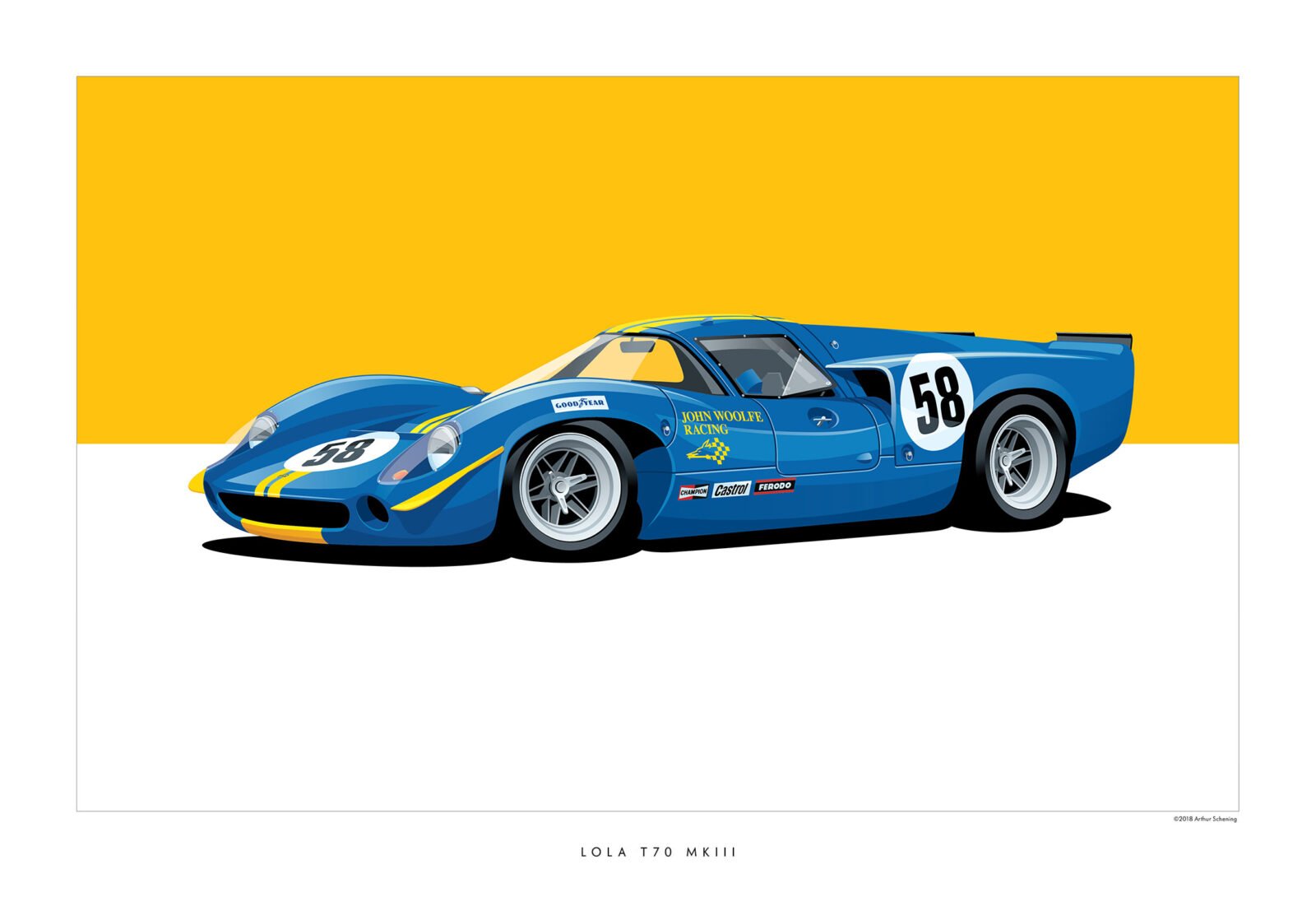 Arthur Schening is an artist and graphic designer who is perhaps known best for his automotive art, characterized by its close attention to detail, clean minimalism, and well-researched historical accuracy.

Arthur runs Schening Creative, his own design and illustration firm. He has well over 20 years of experience working for all manner of clients around the United States developing printed materials, infographics, websites, online materials, exhibits, logos and corporate branding.

When he’s not hard at work Arthur likes to indulge his passion for classic cars, particularly classic racing cars. His work now hangs on the walls of some very special garages and homes around the world. If you’d like to see more of his work or order some for yourself you can hit the red button below. 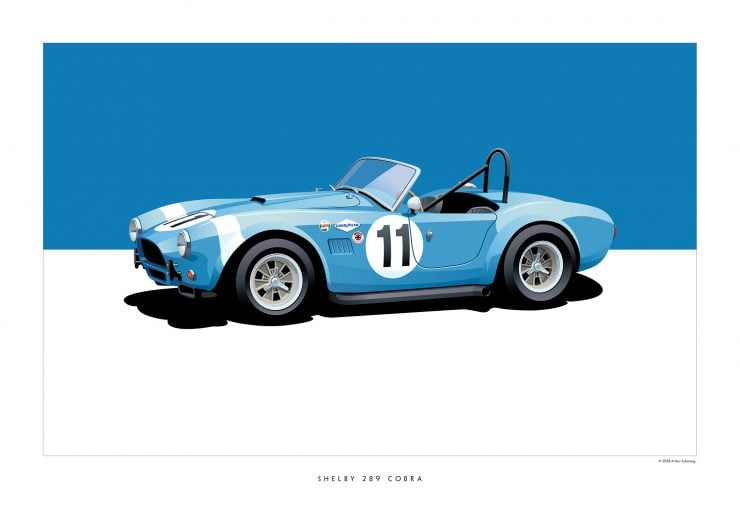 The Cobra 289 Roadster, driven for the Shelby American Team by Dan Gurney and Bob Johnson, from the 1964 12 Hours of Sebring. With about an hour left in the race, Bob Johnson smashed the number 11 Cobra into a limping Alfa Romeo TZ near the entry to the pits.

The Cobra flipped end-over-end, and the Alfa burst into flames. Another driver, Jocko Maggiacomo, pulled the driver of the Alfa, Consalvo Sanesi, from the burning car. They both suffered serious burns, amazingly Bob Johnson was relatively unhurt, but both cars were totally destroyed. 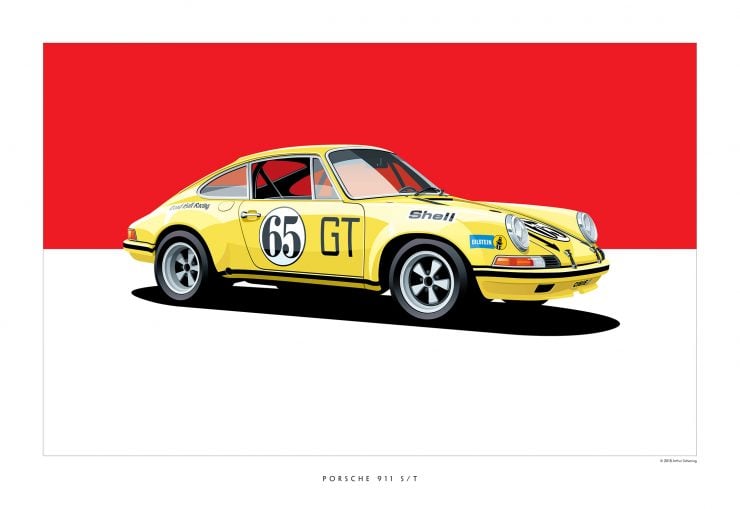 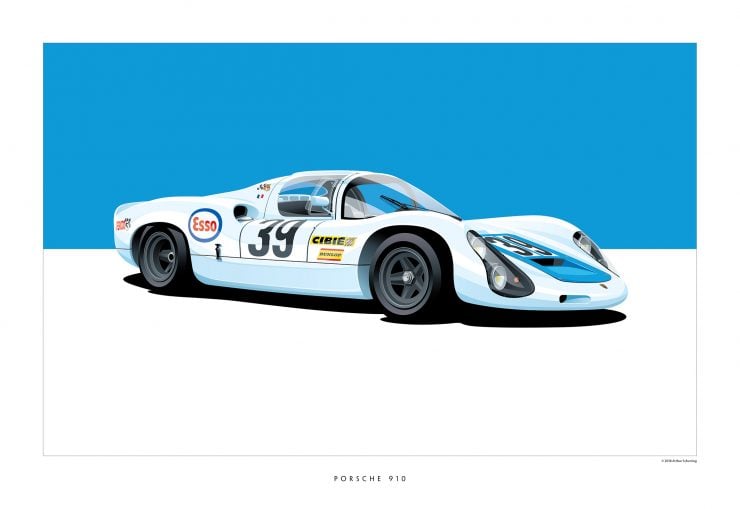 The 1967 Porsche 910, entered and driven by French privateer Christian Poirot and Pierre Maublanc, won its class at the 1969 24 Hours of Le Mans, and came in 9th place overall. The car was originally built as a factory racer for the 1967 Targa Florio – where it finished 3rd overall. 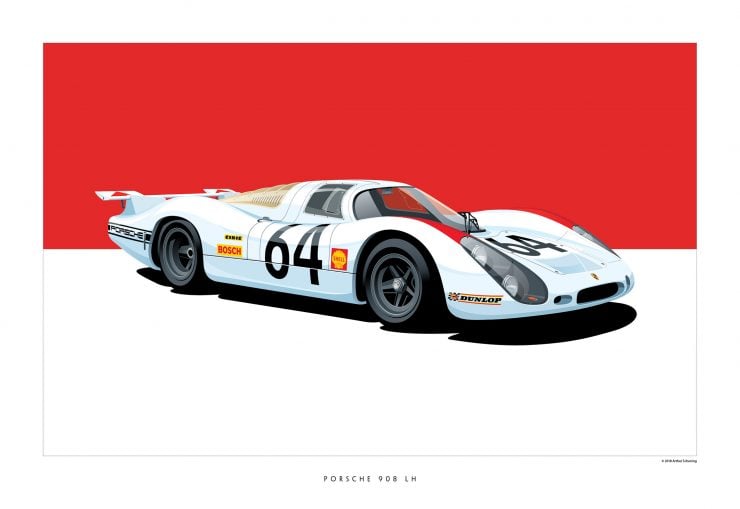 The number 64 Porsche 908, driven by Hans Herrmann and Gérard Larrousse, won the prototype class in the 1969 24 Hours of Le Mans, and took second place overall, behind Jacky Ickx and the Gulf Ford GT40. 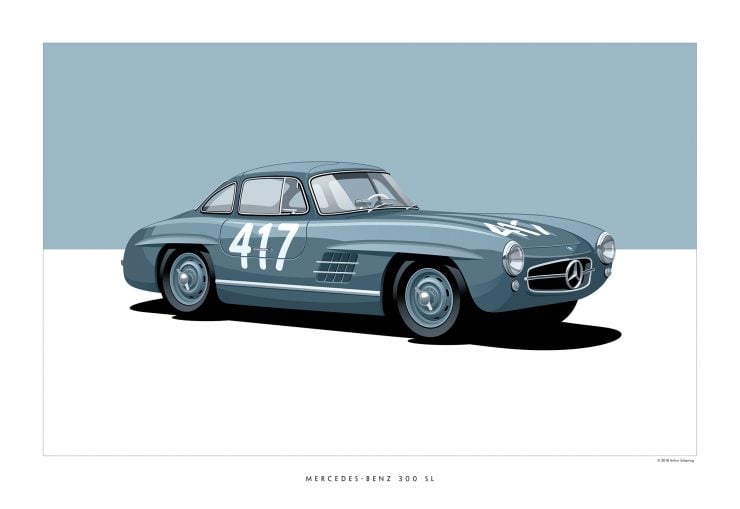 The Mercedes-Benz 300 SL driven by Americans John Fitch and Kurt Gesell at the 1955 Mille Miglia. Fitch and Gesell won the GT class, and finished in 5th place overall. 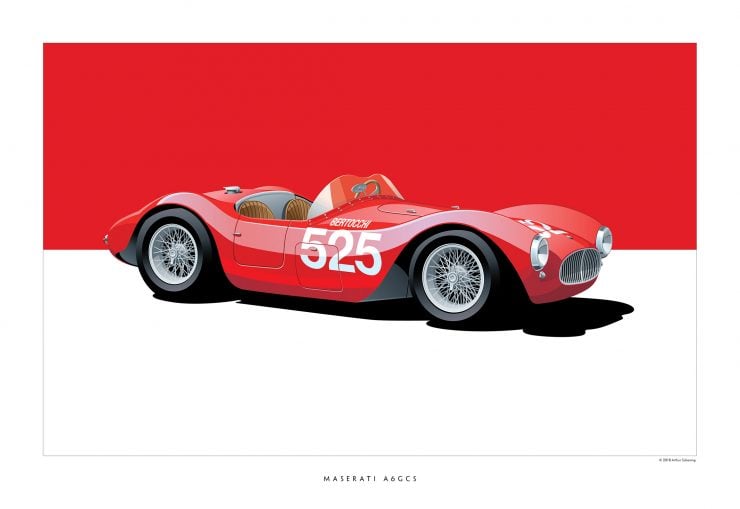 The Maserati A6GCS driven by Emilio Giletti and navigator Guerino Bertocchi at the 1953 Mille Miglia. They finished in 6th place out of a total of 577 cars that were entered (490 cars started the race, and 283 cars finished). 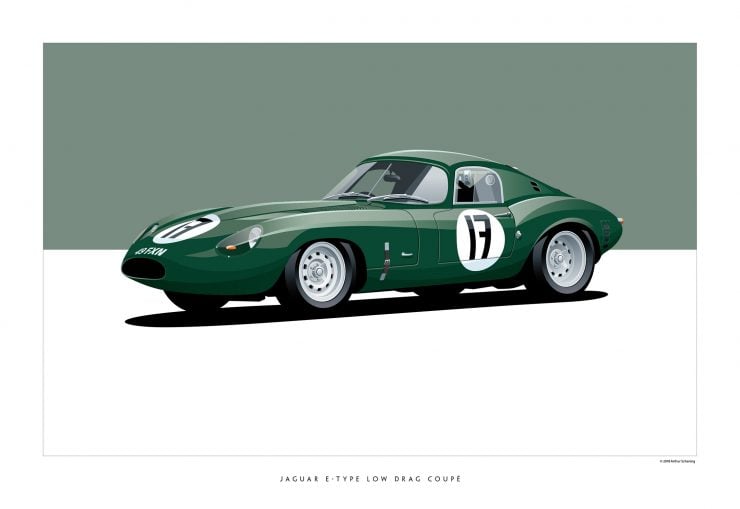 The number 17 E-Type as driven by privateer Peter Sargent and Peter Lumsden at the 1964 24 Hours of Le Mans – it failed to finish the race due to a gearbox issue. Jaguar built 12 lightweight E-Types for racing, two examples were modified with the distinctive low-drag bodywork. 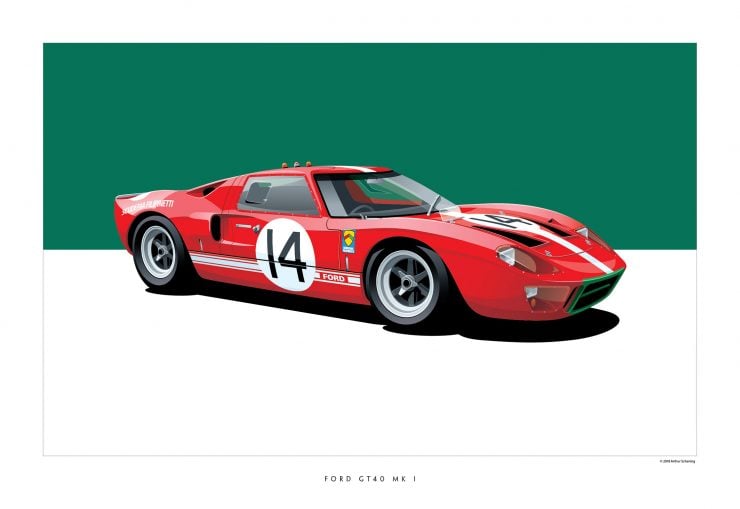 The Scuderia Filipinetti Ford GT40 Mk I – driven by Peter Sutcliffe and Dieter Spoerry – from the 1966 24 hours of Le Mans. It failed to finish the race due to an accident on lap 233. A trio of more powerful Mk II GT40s famously won the race that year. 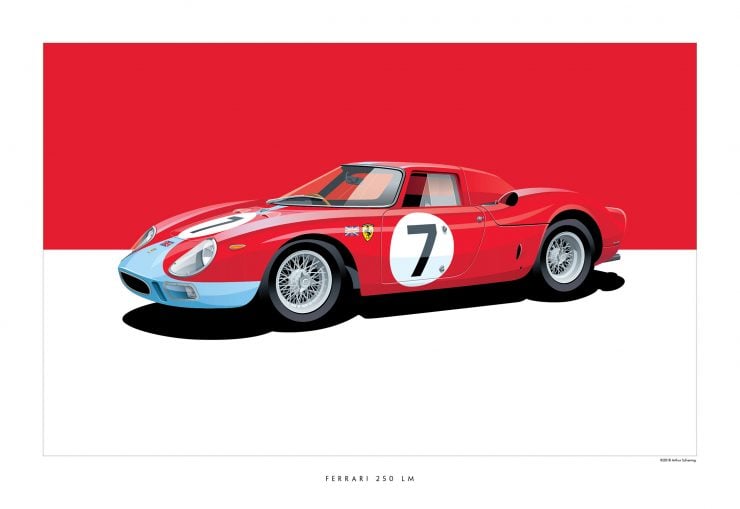 The Maranello Concessionaires 250 LM driven by Graham Hill and Joachim Bonnier won the 1964 12 Hours of Reims. A North American Racing Team (NART) Ferrari 250 LM would win at Le Mans in 1965 – the last overall victory for Ferrari at Le Mans. 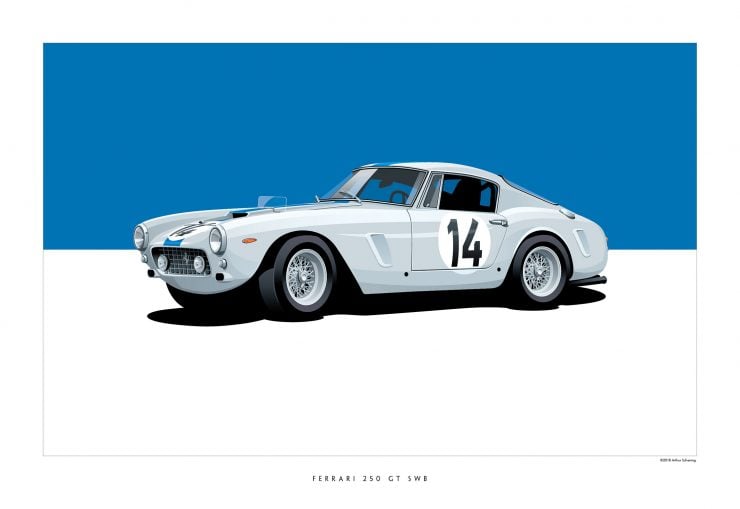 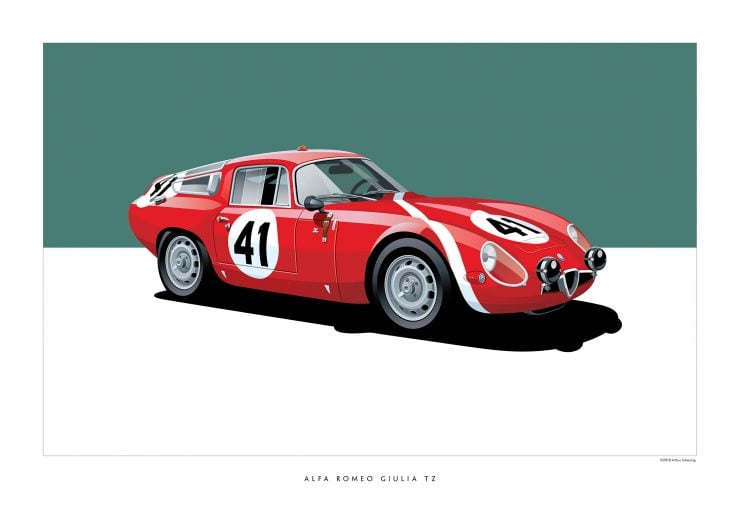 The Alfa Romeo Giulia TZ driven by Giampiero Biscaldi and Giancarlo Sala at the 1964 24 Hours of Le Mans. The Scuderia St. Ambroeus entry finished in second place in the 1.6-litre GT class behind another TZ. 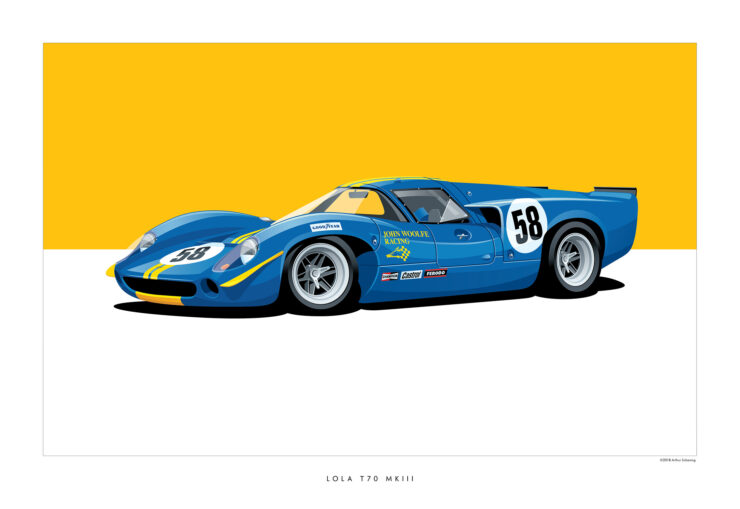 The John Woolfe Racing Lola T70 MkIII driven by Richard Attwood at the 1969 Guards Trophy Snetterton (Attwood failed to finish the race due to engine issues). 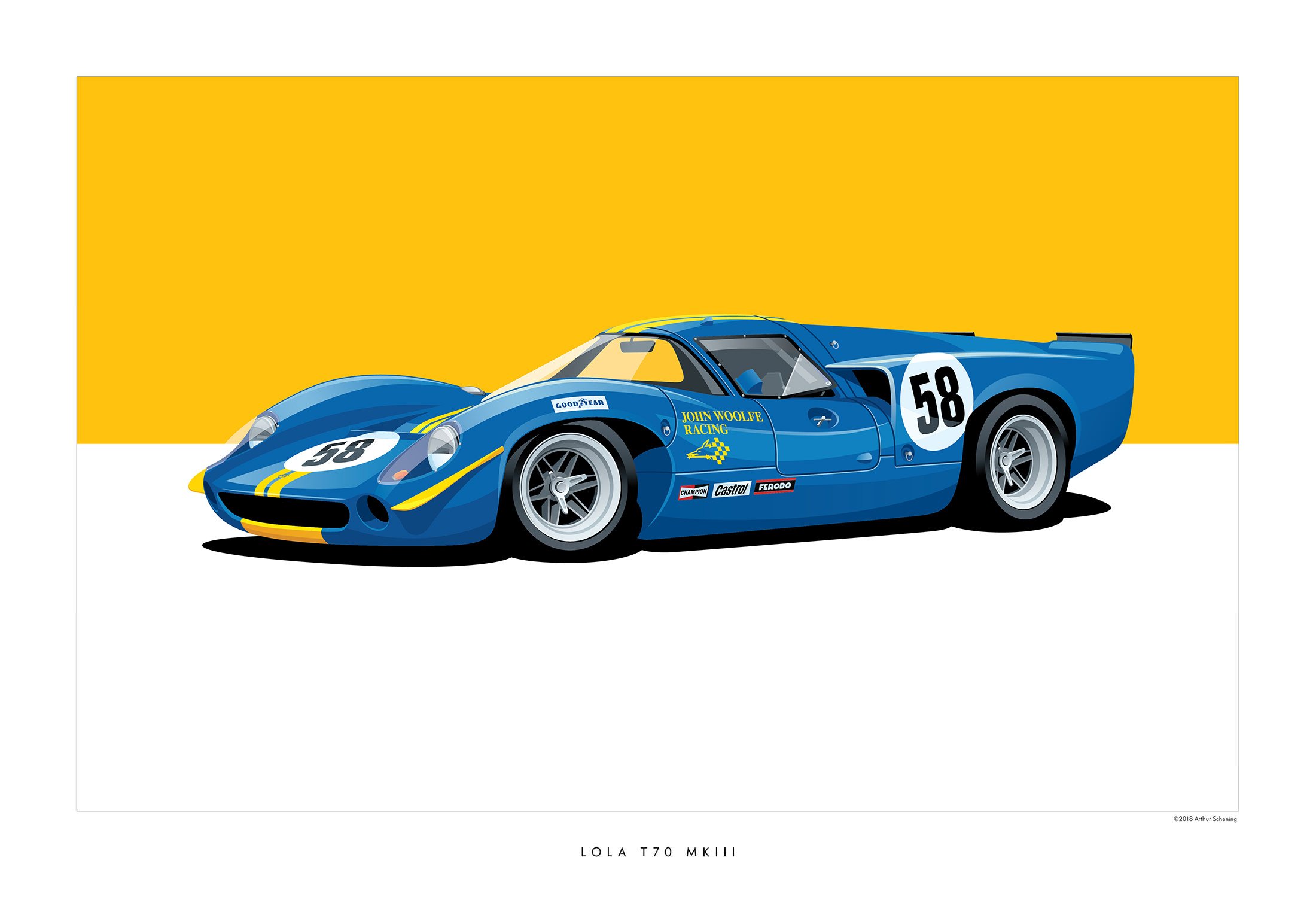