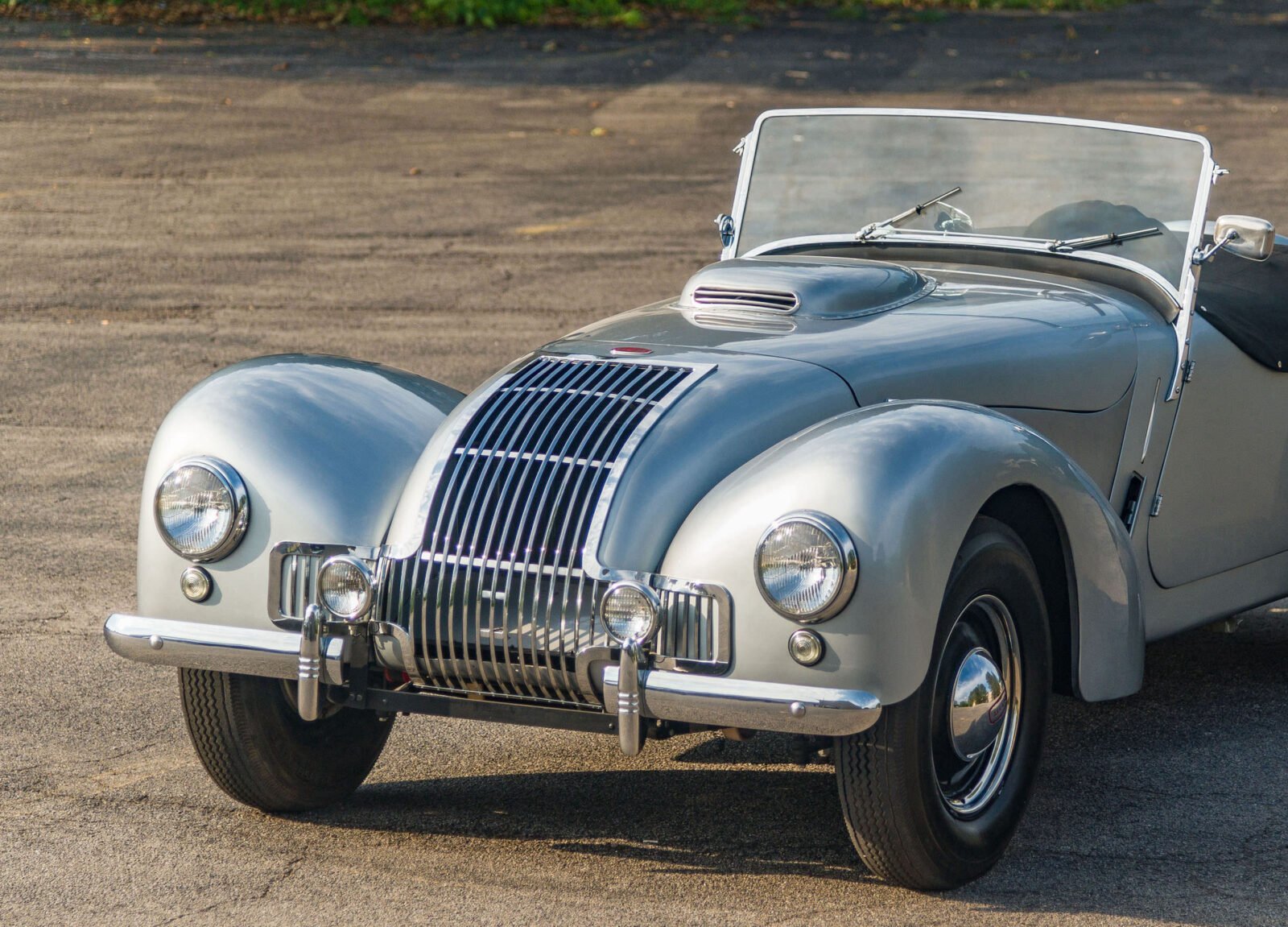 The cars built by Allard directly influenced the thinking of both Zora Arkus-Duntov, the father of the Corvette, and Carroll Shelby, the father of the Shelby Cobra. Both men were racing drivers for company founder Sydney Allard back in the early 1950s, where they quickly learned the advantages of having a powerful American V8 in a lightweight British sports car.

The car you see here is believed to be the only Allard K1/2 that was ever built, it started out as a standard Allard K2 however the owner changed his mind, and instead opted to have a K1 body applied to the more advanced K2 chassis.

Sydney Allard – The Man Who Changed Everything

Sydney Allard is a man who should doubtless be remembered far more broadly than he actually is, he’s been nicknamed the “father of British drag racing,” he won the Monte Carlo Rally (Stirling Moss came second) in 1951 driving a car he designed and built himself, and he developed a slew of road and race cars over the years that would have an immeasurably significant impact on sports car design on both sides of the Atlantic.

Above Video: Sydney Allard and his wife Eleanor Allard (also an accomplished racing driver) returning to his factory after winning the 1952 Monte Carlo Rally.

Sydney Allard started out racing motorcycles before switching to a three-wheeled Morgan, and from there to regular automobiles. He enjoyed success at every level but it would be in the world of automobiles that he would find his true calling.

Before the Second World War erupted across Europe, Allard was already building high-performance cars that were powered by affordable, reliable, and easily attainable American V8 engines – specifically the Ford Flathead V8 in the company’s early years.

In 1936 he won his class at the Brighton Speed Trials in a Ford V8-powered car and he would continue racing Ford V8 and Lincoln V12-powered cars right up to the outbreak of war, in fact Allard won the last speed event to be held in England before WWII – the Horndean Speed Trials of 1939.

During the war Allard’s company would shift its focus from racing cars to the war effort, repairing army vehicles – usually Ford-built Jeeps and Ford trucks. Once the war ended he wasted no time returning to competition, racing in the Filton Speed Trials on the 28th of October 1945 – just 56 days after hostilities ended.

Throughout the late 1940s and 1950s the Allard Motor Company would become a highly regarded automobile manufacturer, offering race cars, sports cars, and sporting grand tourers. The company’s efforts on the race tracks of Europe would see them hire a number of engineers and racing drivers including Zora Arkus-Duntov and Carroll Shelby. 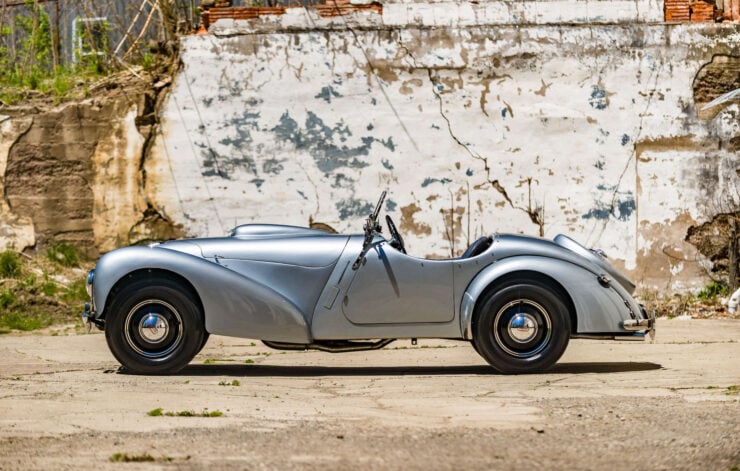 Allards were built to a simple formula, a British sports car with good handling could with an affordable, powerful American V8. It would prove to be a highly influential recipe.

Both Arkus-Duntov and Shelby raced for Allard at the same time, piloting the lightweight sports cars at eye-watering speeds down the Mulsanne Straight on the Circuit de la Sarthe, fast learning to appreciate the qualities of a British sports car with an American V8 engine.

A short time after this in 1955 Arkus-Duntov would be responsible for getting a V8 and a manual transmission fitted to the first generation Chevrolet Corvette, and turning it into a genuine sports car.

After retiring from racing Carroll Shelby would turn his attention to creating his own car company, starting with the Shelby Cobra – a vehicle he developed by fitting a Ford V8 into a lightweight British AC Ace sports car.

The Allard Motor Company would only operate for 13 years, opening its doors in 1945 and ceasing operations in 1958 with approximately 1,900 cars built. Today the surviving Allards are highly sought after by enthusiasts and they’re a regular sight at classic motor racing events. 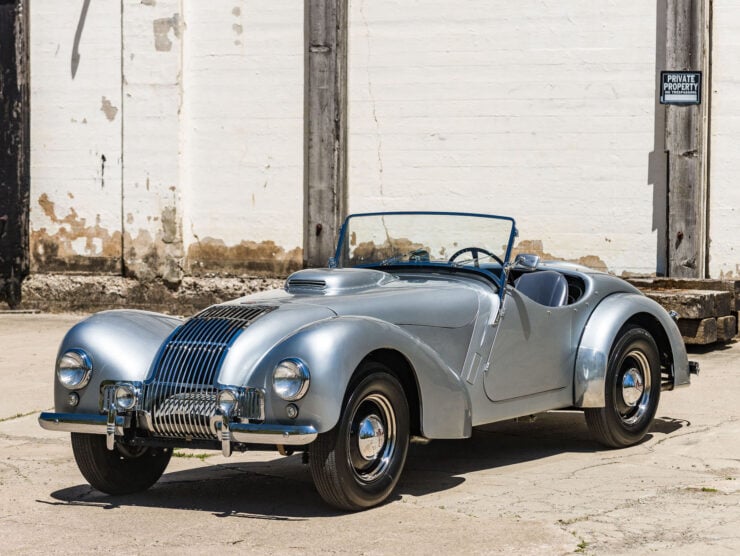 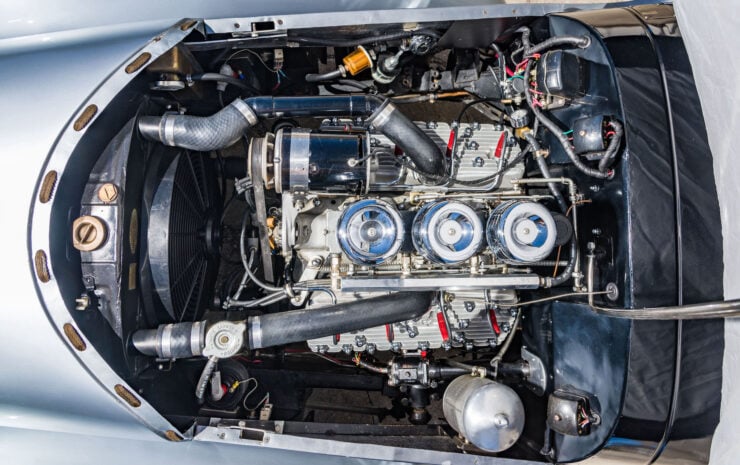 The Allard K1/2 is powered by a highly modified Ford flathead V8 with a capacity of 295 cubic inches, Edelbrock heads, an Edelbrock intake manifold, and triple Stromberg 97 carburetors.

It’s not every day that a genuine one-of-a-kind Allard comes up for sale. As mentioned above this car was ordered as a K2 before the buyer changed their mind and opted for a K1 style body. This buyer was based in the United States, and this is where the car was delivered, through the John Forbes Agency of Boston, Massachusetts.

Later in its life the car was given an amateur, part-time restoration that took the better part of 30 years. In 2003 it was acquired by a new owner who commissioned a professional restoration, and it remains in excellent condition today.

It’s been driven fewer than 600 miles since the restoration was completed, and it was finished with a slew of period correct touches like Smiths gauges in a wooden dashboard, black steel wheels with chrome rings and hub caps, and restored brightwork throughout.

The car is powered by a 1947 Ford flathead V8 that has been bored out to 295 cubic inches and equipped with Edelbrock heads, an Edelbrock intake manifold, and triple Stromberg 97 carburetors.

In 2017 the car was bought by sculptor and furniture artist Wendell Castle, and it’s being offered for sale out of his collection as part of the RM Sotheby’s sale in Hershey, Pennsylvania. If you’d like to read more about it or register to bid you can click here to visit the listing. 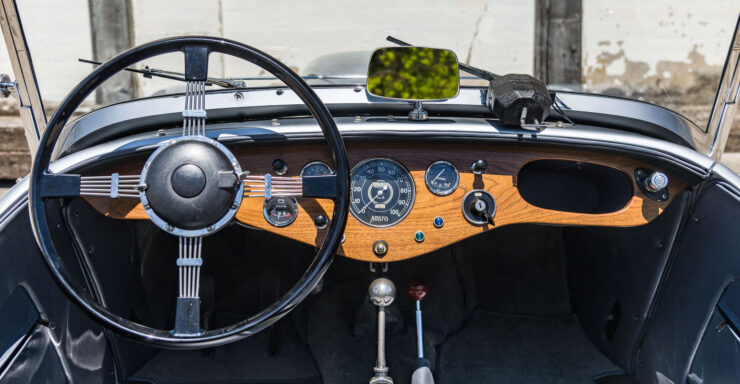 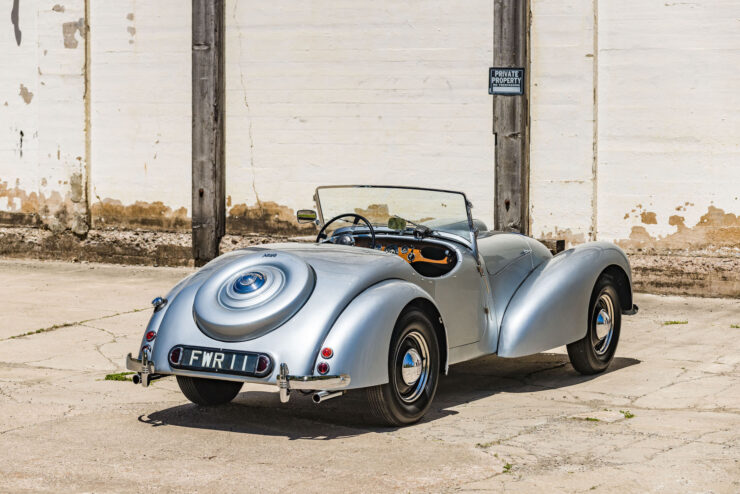 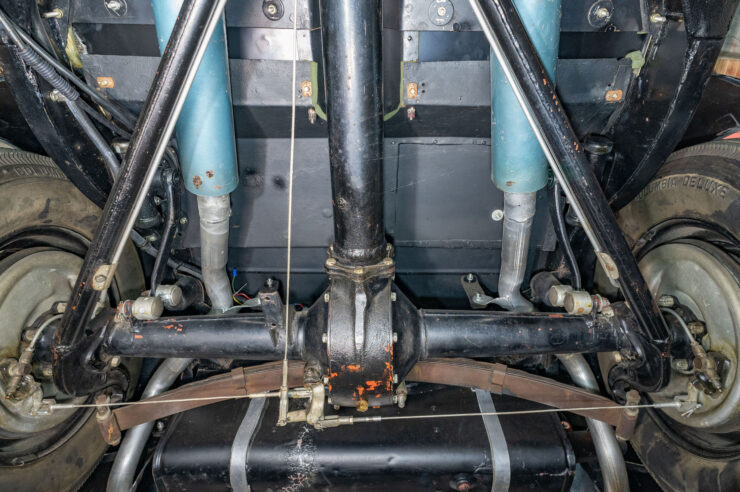 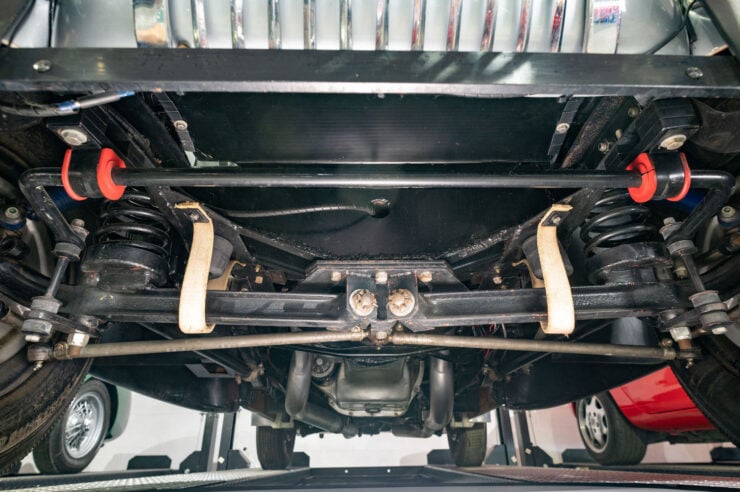 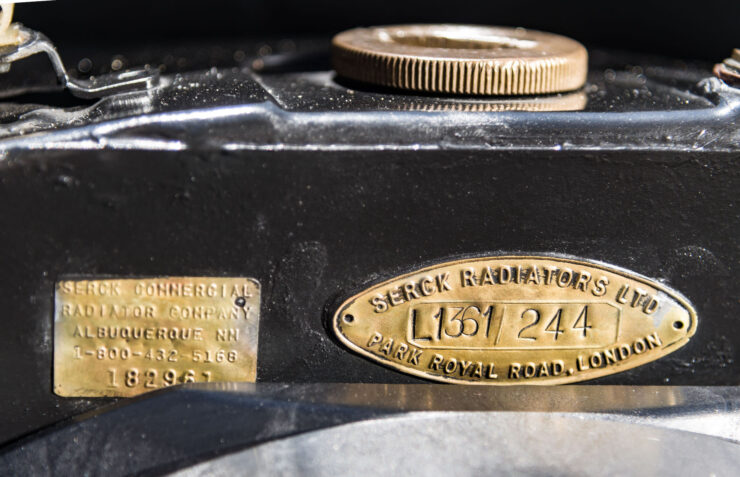 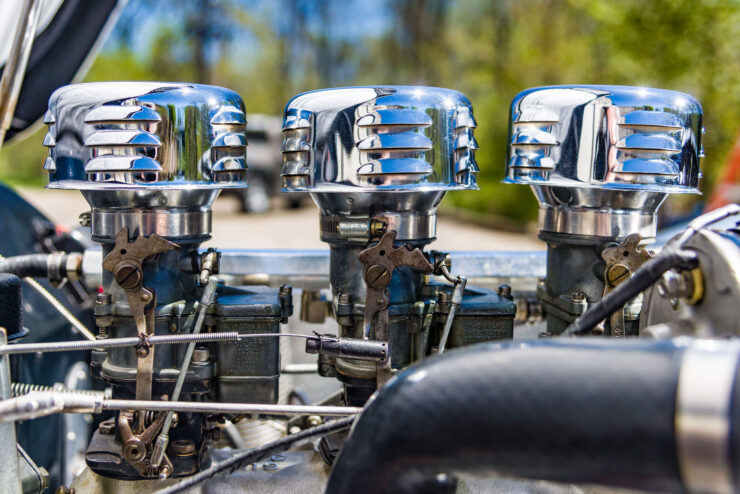 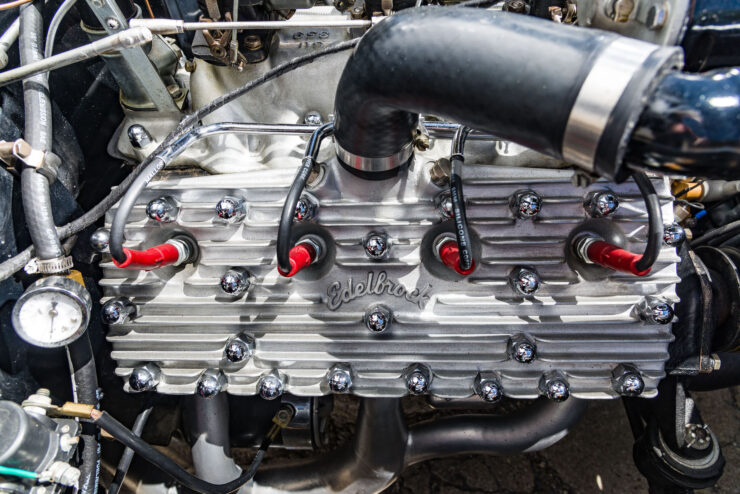 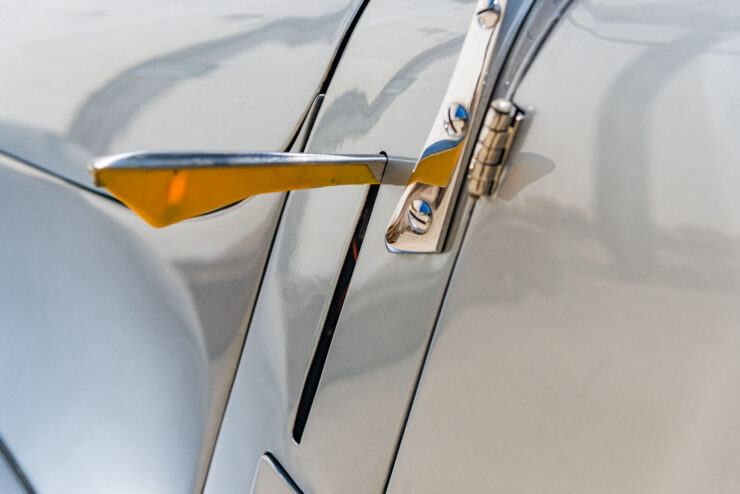 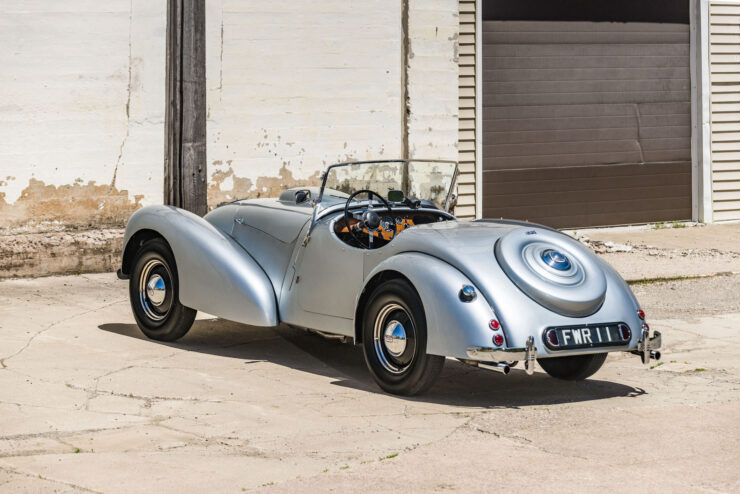 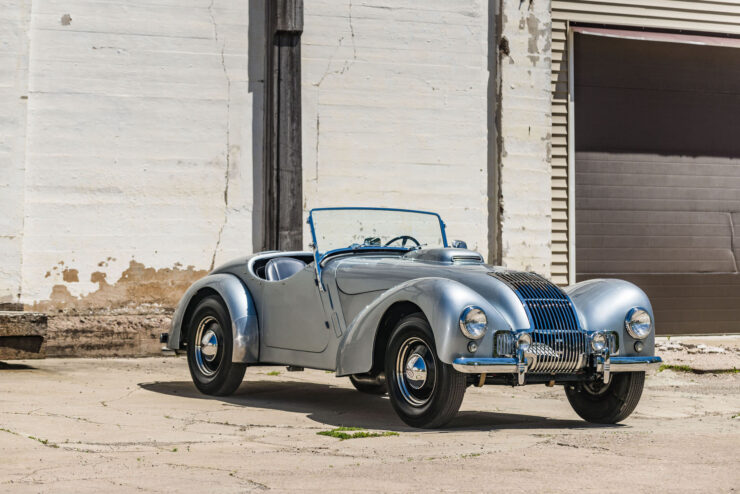 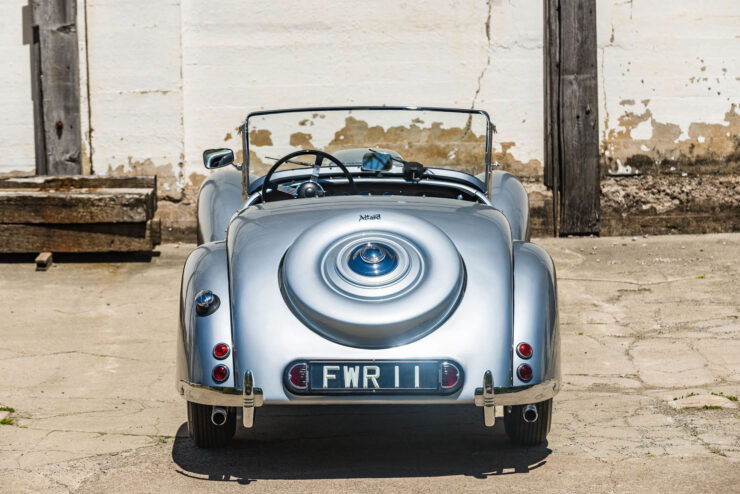 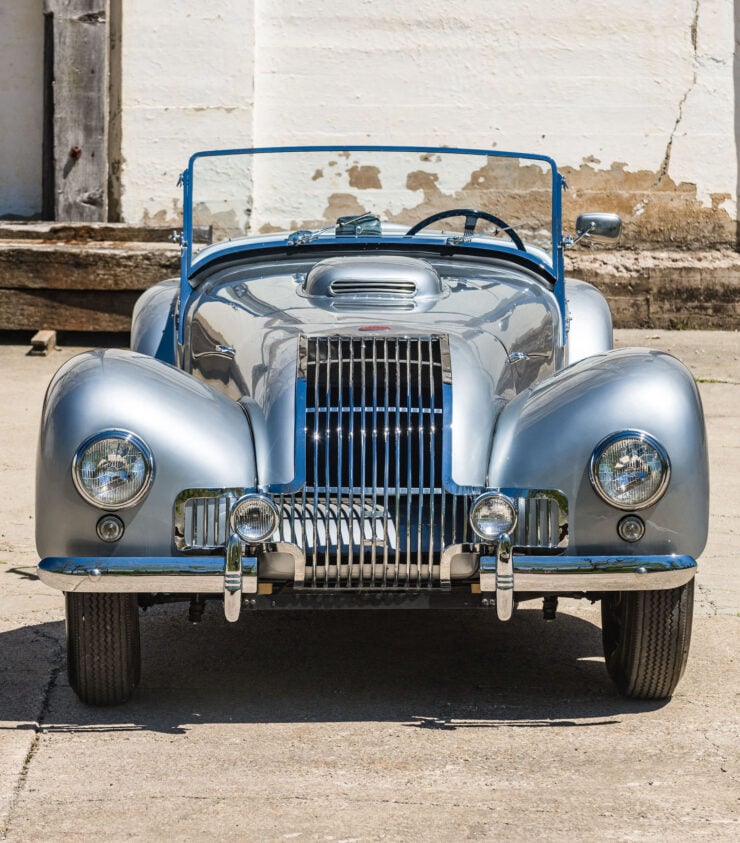 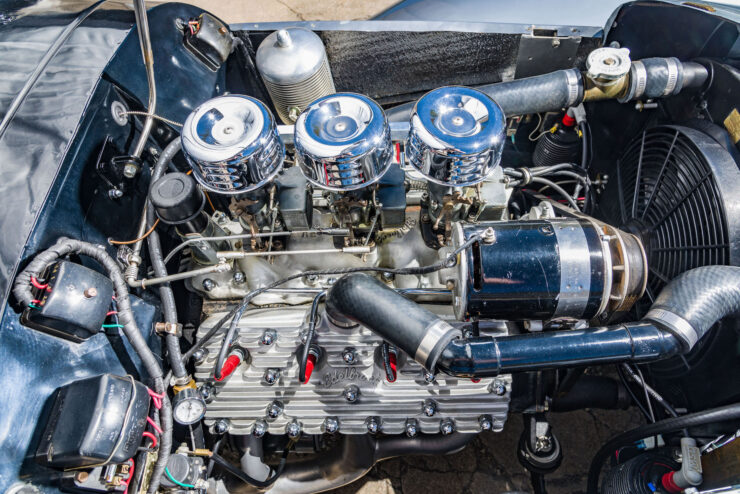