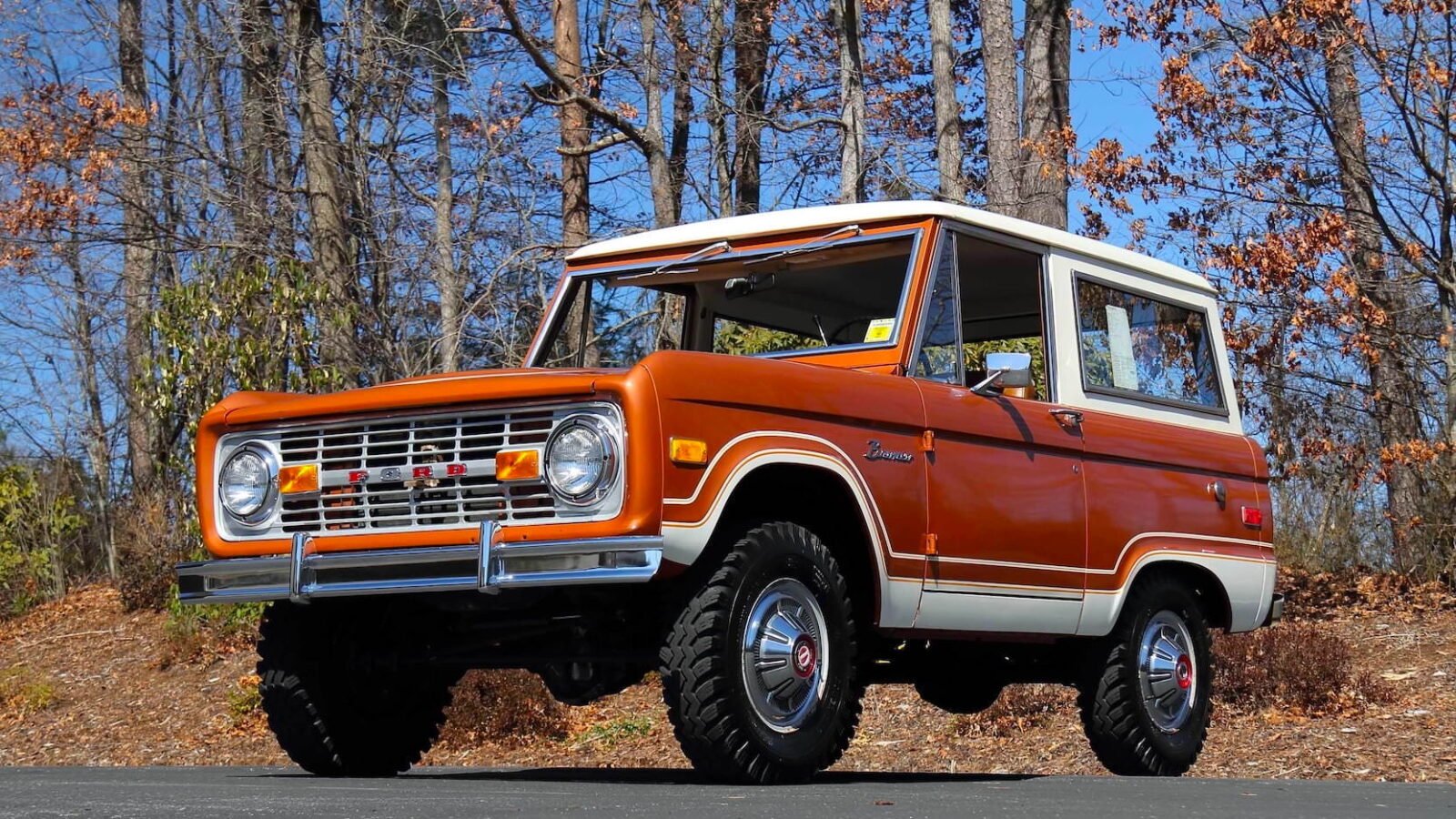 This Ford Bronco has been in single family ownership since it was bought new in the mid-1970s, in all the decades that have passed since it’s been garage stored and it’s only covered 3,150 miles – it’s now being offered for sale for the first time.

The Bronco has been in the headlines a lot in the last few months, in July 2020 Ford announced the new Bronco model family and it proved wildly popular, with order books quickly filling. A significant reason for the popularity of the 2021 Bronco is that Ford went back to the first generation model for the styling cues, developing a 4×4 with a retro look but with modern underpinnings.

The first generation Ford Bronco is now one of the most desirable vintage four-wheel drives in the world alongside its longtime rival, the International Harvester Scout. The reason these two in particular are so beloved is probably down to a combination of nostalgia and the purely analog driving experience they offer – with no driver aids, parking assist, ABS, lane keeping assist, or even air conditioning usually.

When the Ford Bronco was first released in 1965 it was playing catch up, the CJ Jeeps had already been in the game for years, the Scout was wildly popular, and other imported four-wheel drives like Land Rovers and Land Cruisers weren’t doing badly either.

The team behind the Bronco shared some of the same faces as the team that had developed the Mustang, including Ford product manager Donald N. Frey, Ford engineer Paul G. Axelrad, and of course, the legendary Lee Iacocca.

They developed an all-new chassis for the Bronco and a new steel body, then they raided the Ford parts bin in an effort to trim costs, sourcing engines, transmissions, axles, and brakes. The body design was famously so simple that the door skins from either side of the car were interchangeable before the holes were drilled for door handle fitment. 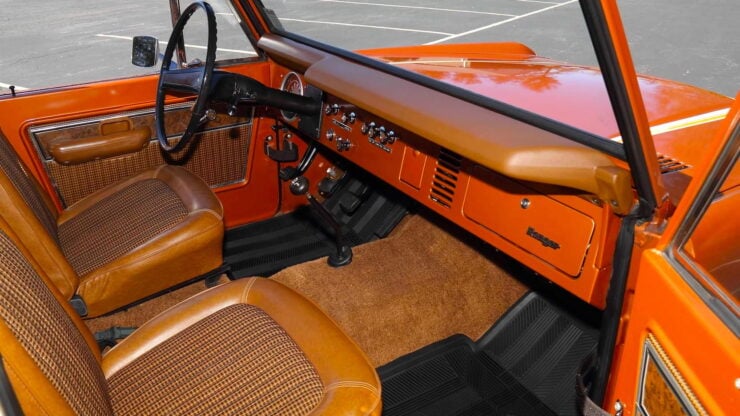 Above Image: The interior of the truck looks almost new, remarkable given it’s 46 years old.

For the first few years of production the Bronco came with just one engine option, the 105 hp inline-six from the Ford Falcon. In 1969 this changed with the introduction of the 289 cu. in. V8 also used in the Ford Mustang – offering a considerable boost in power.

The first generation Bronco would stay in production from 1965 until 1977, proving to be a very successful new model for Ford and starting a model family that now extends to six generations over 56 years and counting.

As mentioned above, this Bronco has been in single family ownership since it was brand new, being passed down from father to son and covering just 3,150 miles in all those years. It was kept safely tucked away from rain, snow, and wind in a garage.

Amazingly the original window sticker is still attached, this Bronco was ordered new with the Ranger package and the 302 cu. in. V8 mated to a three-speed manual transmission. The original numbers-matching engine is still in the vehicle.

The unusual paint color is called Hot Ginger Metallic, and it has a matching ginger interior with plaid accents. This vehicle also came new with power steering, the 4,500 lb GVW package, Ford 3300 Traction-Lok, an extra cooling radiator, locking hubs, and as it was intended for export, it came without a catalytic converter.

If you’d like to read more about this Bronco or register to bid you can click here to visit the listing on Mecum. It’s due to cross the auction block in mid May and it’s being offered with no reserve. 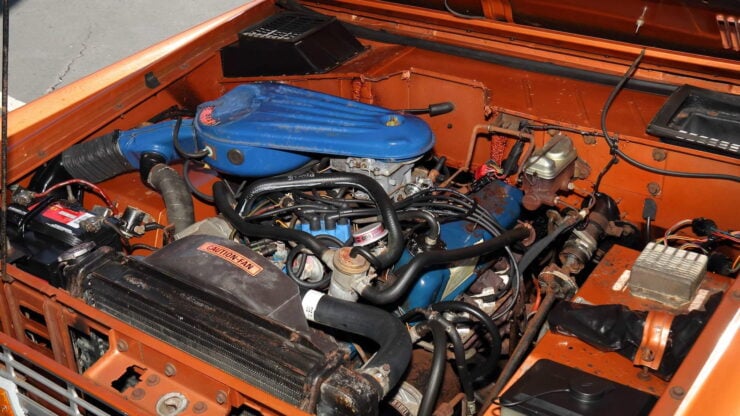 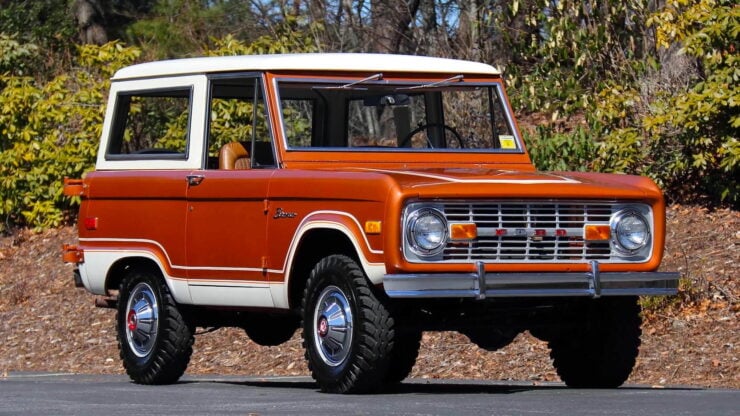 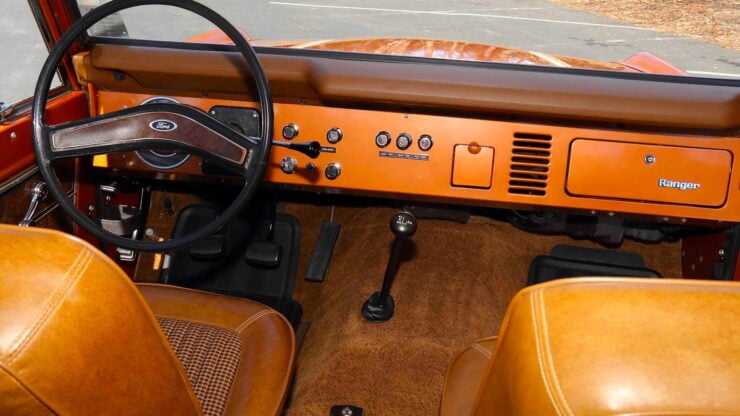 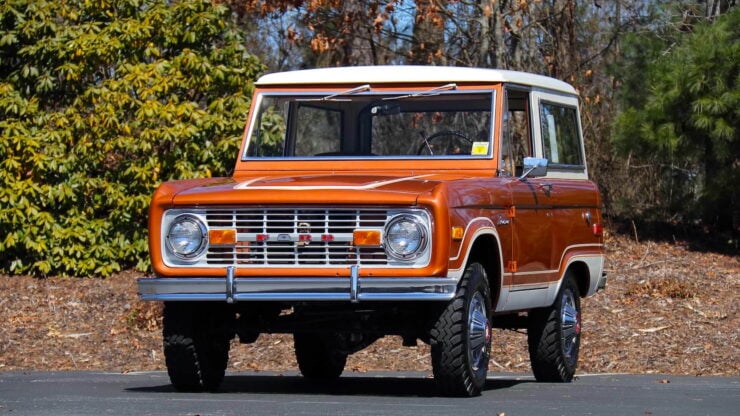 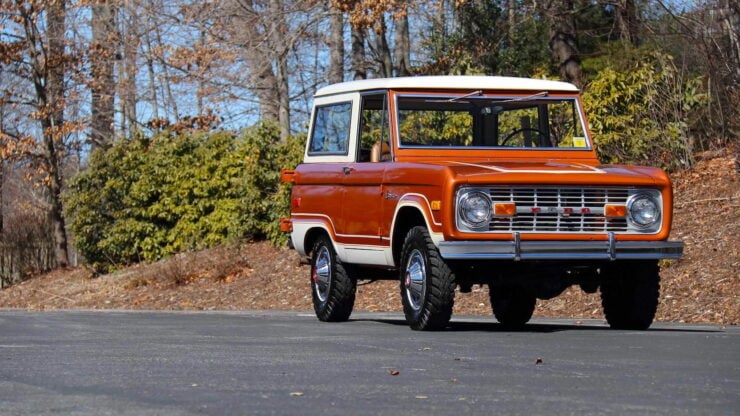 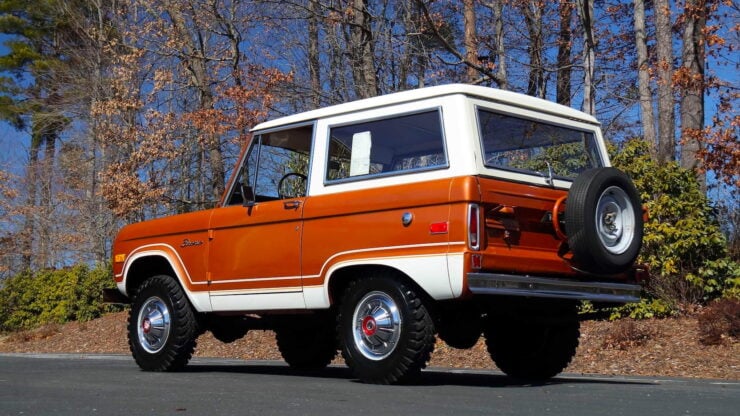 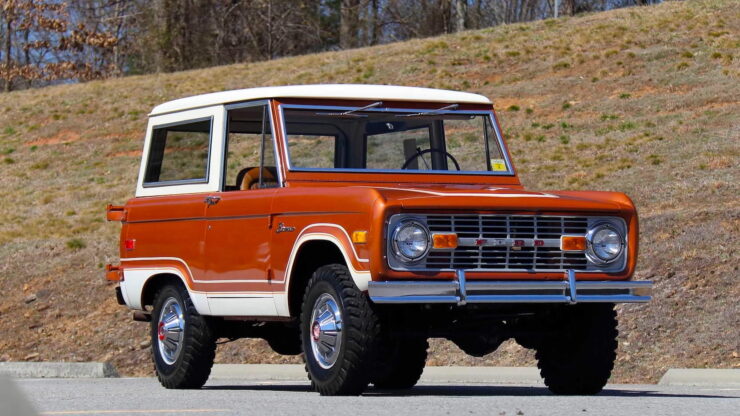 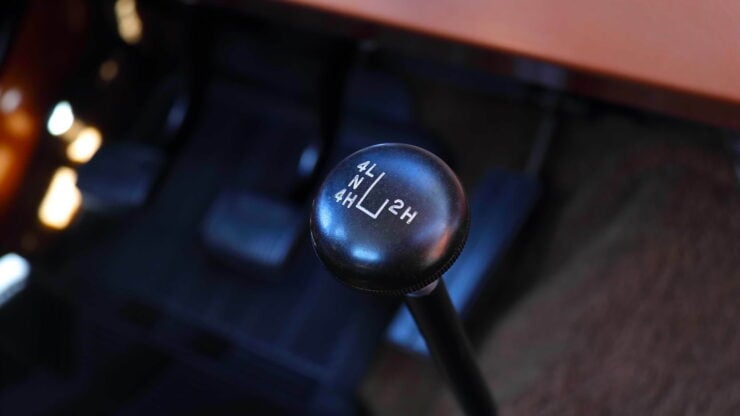 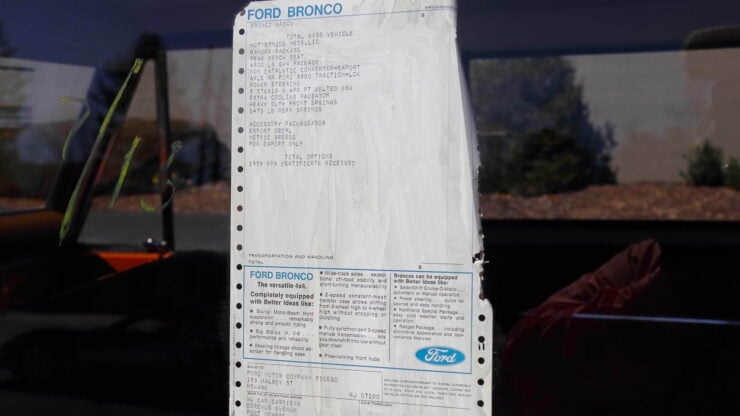 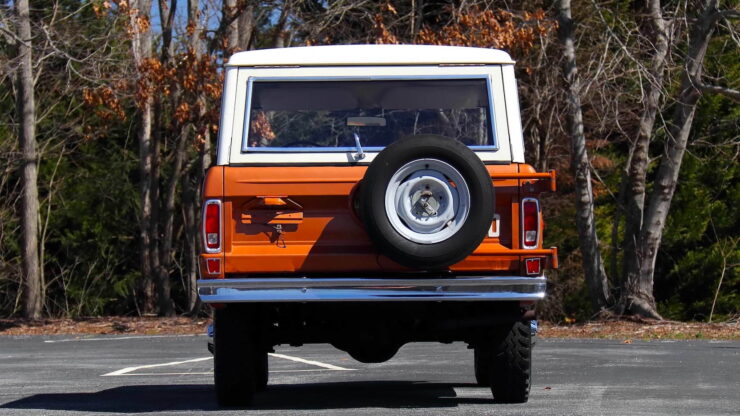 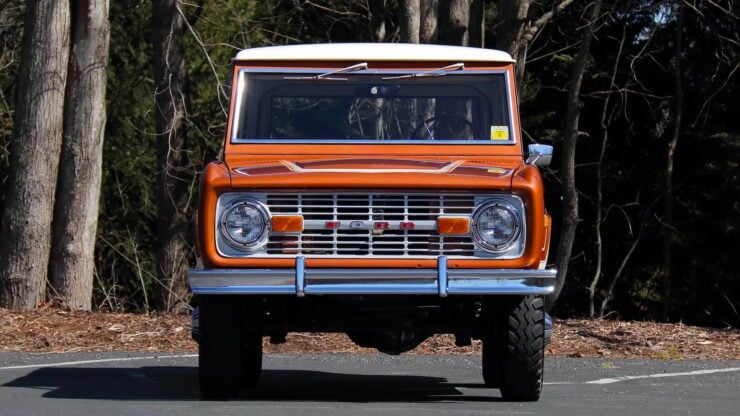 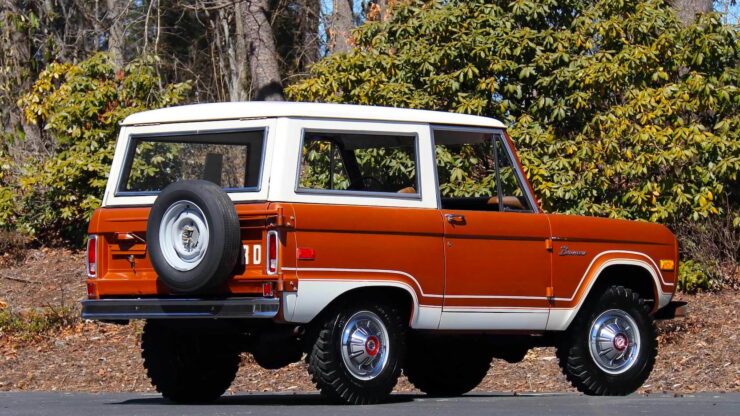 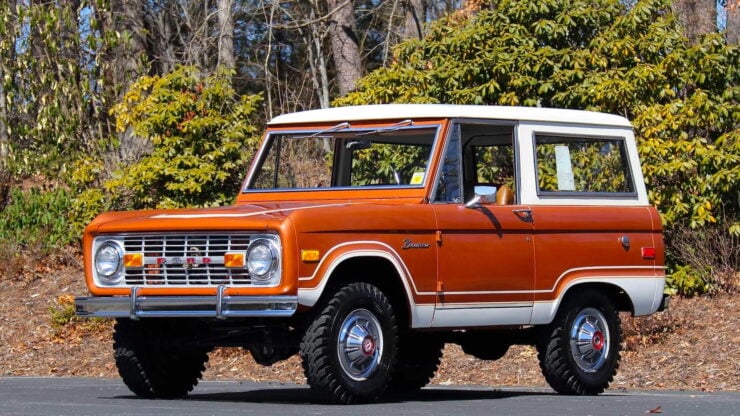 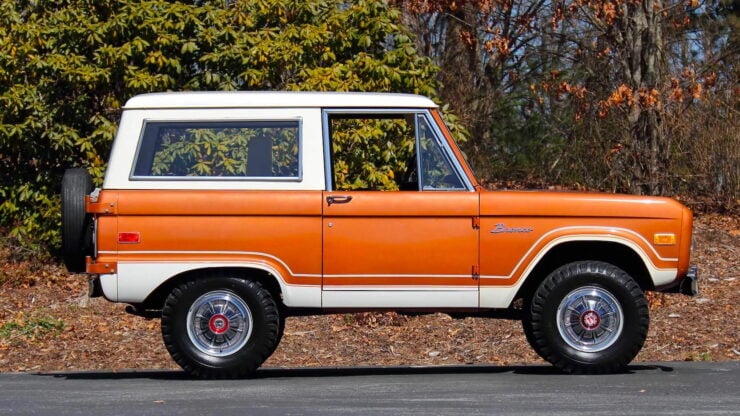 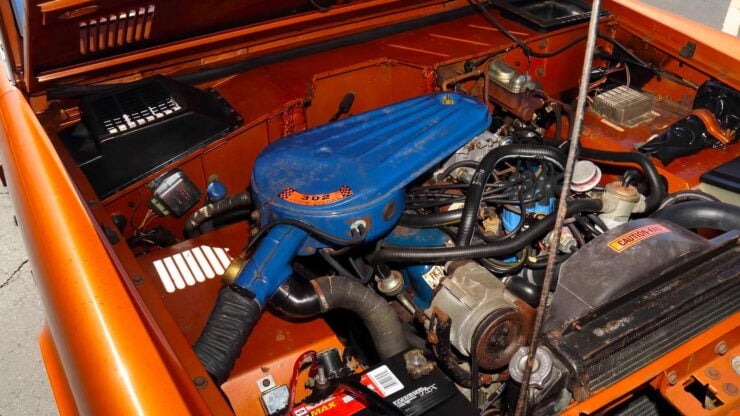 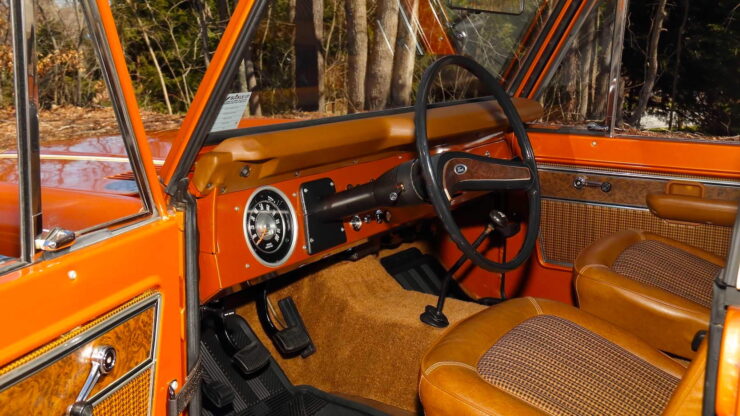 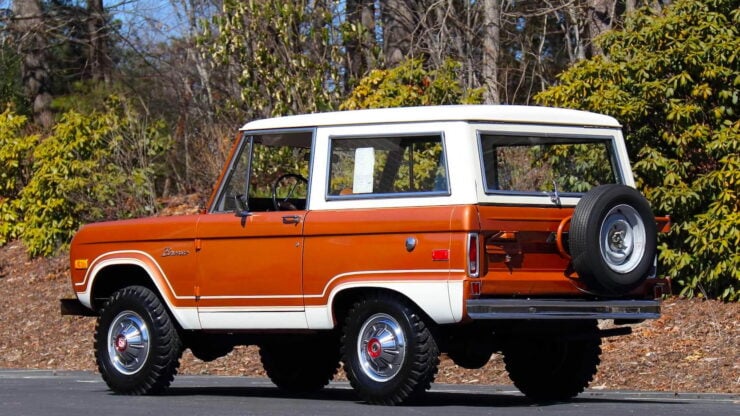 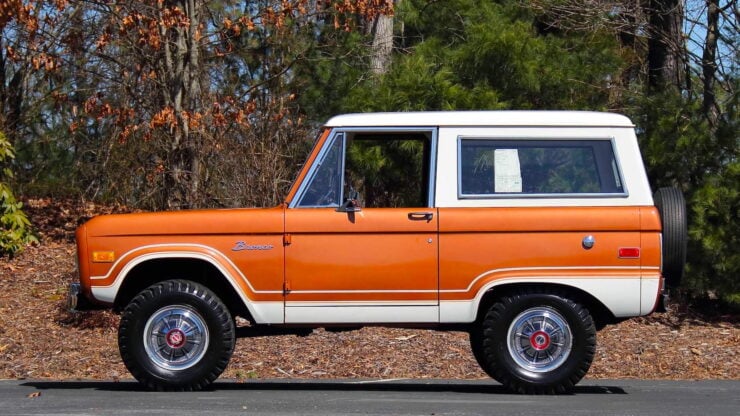