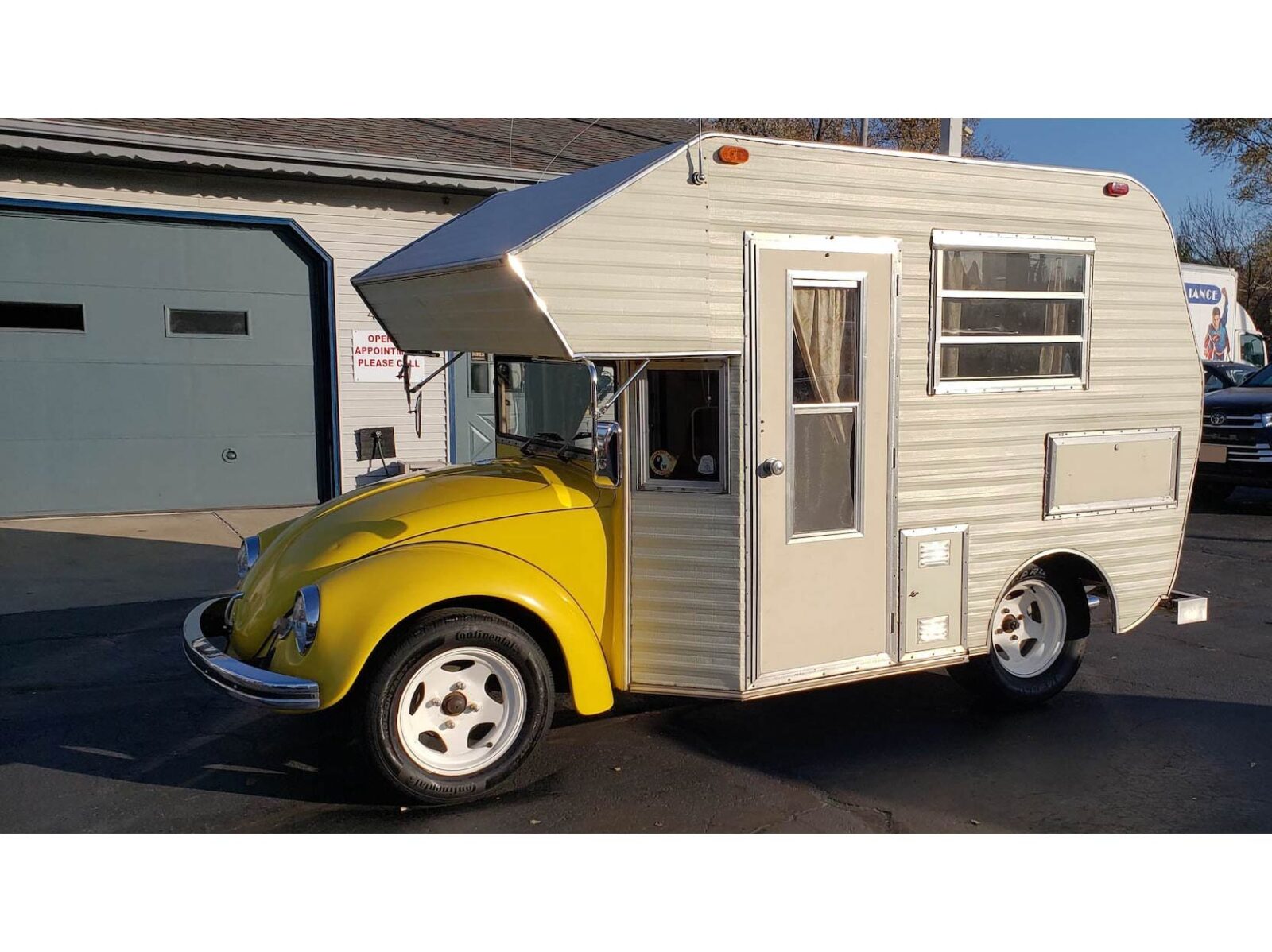 This is an original 1969 Volkswagen Super Bugger, possibly the most unfortunately named vehicle of all time. I’ve never actually seen one of these come up for sale though I have occasionally seen them pop up on obscure motoring forums as an object of curiosity (and no small amount of mirth).

The Super Bugger first appeared in the early 1970s, a small company was founded in Costa Mesa, California that supplied turn-key Super Buggers as well as kits and/or plans for people who wanted to build their own. It’s not known what happened to the company however a few short years later they had disappeared.

✱ The Super Bugger was a questionably named camper conversion that people could do to their VW Beetles.

✱ The example you see here is one of the most famous examples of the Super Bugger, and it was featured in Mechanix Illustrated magazine in 1977.

✱ Despite its somewhat unconventional appearance this vehicle is apparently capable of highway speeds and it can accommodate two people for overnight stays.

Shortly after this in 1977 Mechanix Illustrated magazine published plans for a vehicle that appears almost identical to the Super Bugger named the “Minihome” which led to even more Beetle-Camper conversions.

We know that people were still creating their own Super Buggers well into the 1980s and possibly longer. It’s likely that creating a conversion like this nowadays would be illegal in most jurisdictions due to increasingly stringent engineering requirements on car modifications, however Beetles that were converted in period have no problem renewing their registration.

Due to the popularity and the inexpensive nature of the VW Type 2 van it’s hard to know why the original designers of the Super Bugger chose to use the Beetle as the basis for a camper conversion rather than the Type 2 – which had already been a popular target for camper conversions for 20+ years by that point.

Whatever their reasons for choosing the Beetle the Super Bugger designers succeeded where few likely thought they would in creating a tiny camper capable of accommodating two people, and surprisingly still capable of highway speeds depending on engine choice. 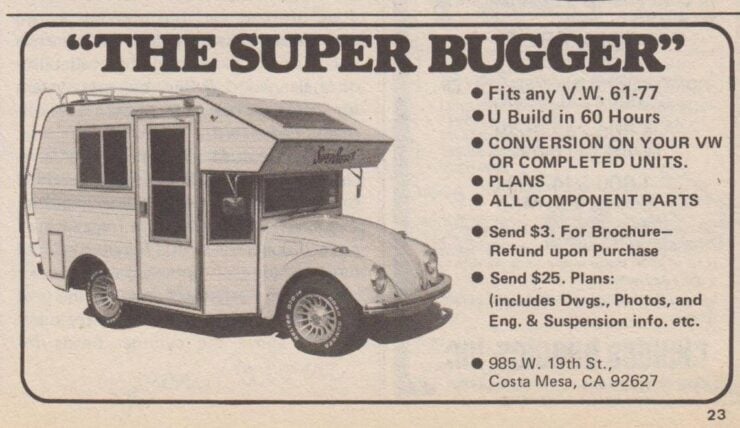 Above Image: This was the original ad run by the company that developed the Super Bugger.

It’s claimed that the Super Bugger conversion would only add an average of 250 lbs of weight to the Beetle, this is because the structure of the camper section is largely made of wood and fiberglass, both of which is lighter than the steel used in the original body.

The design requires that much of the Beetle’s body is cut away, just leaving the front section in place along with the steel floorpan. The new camper body is then fabricated and placed on top, we haven’t been able to find any information about the rigidity of the vehicle once complete but it does seem likely that rigidity suffered to some degree.

The actual interior design of the camper section was quite clever, it provides snug accommodation for two including two single beds, a two-seater dining table and chair, two forward seats for the driver and passenger, and a small kitchenette with a gas cooker and sink.

The cooker and sink was installed in such a way that they could be used both internally and externally, a hatch in the side of the camper allows for it to be slid out for outdoor BBQ style cooking which would have the added bonus of not smoking out the interior.

The Super Bugger you see here is a period conversion based on a 1969 Volkswagen Beetle with a 1973 Super Beetle engine for more power. Impressively the vehicle is still in the possession of the original builder who has now owned it for 52 years.

During the build a set of wider rear tires were used for stability and the suspension was modified to accommodate the additional weight. Inside you’ll find an AM/FM CB radio, ’70s style carpeting throughout with matching curtains, and it even has a crank-handle skylight for ventilation.

Over the years the owner has won awards at numerous local car shows in Illinois and this car was featured in Mechanix Illustrated magazine back in 1977. He notes that everywhere he goes this unusual camper draws a crowd of people who are full of questions, and he explains that the car is highway capable and it gets approximately 27 mpg.

The seller has handed the vehicle over to Mecum who will be offering it for auction over the next few day. At the time of writing there’s no price guide and it’s hard to know what a vehicle this unique may sell for.

If you’d like to visit the listing to read more or register to bid you can click here. 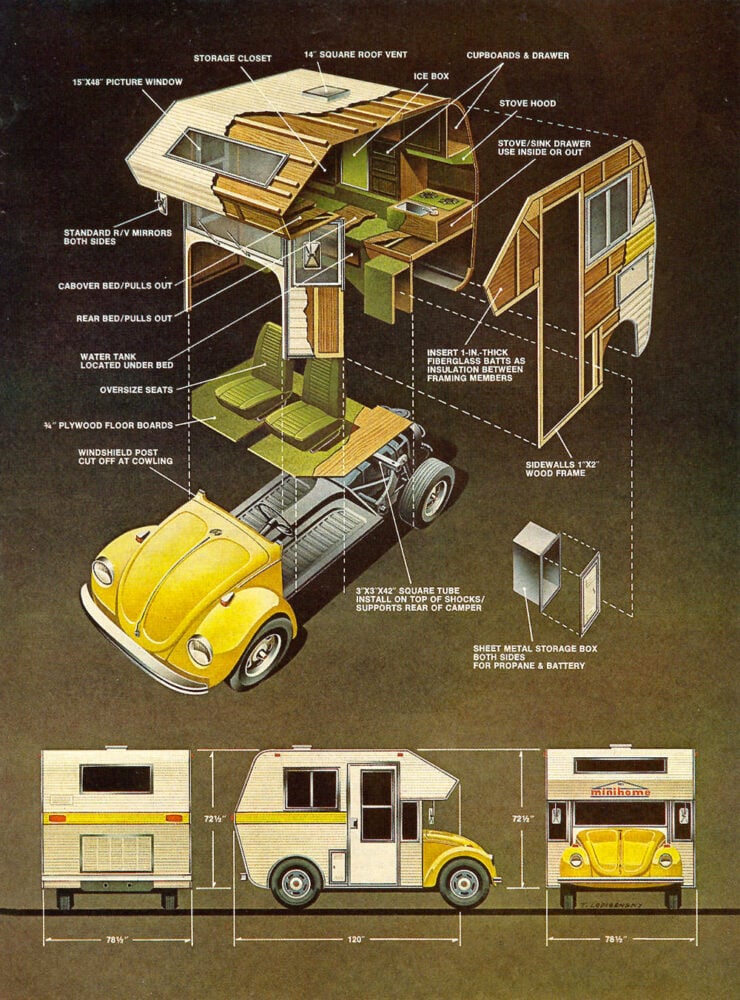 Above Image: An artist’s rendering of the vehicle as published in Mechanix Illustrated magazine in 1977. 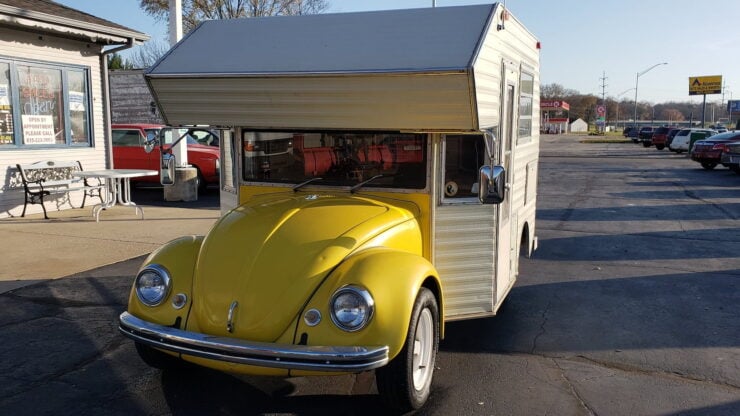 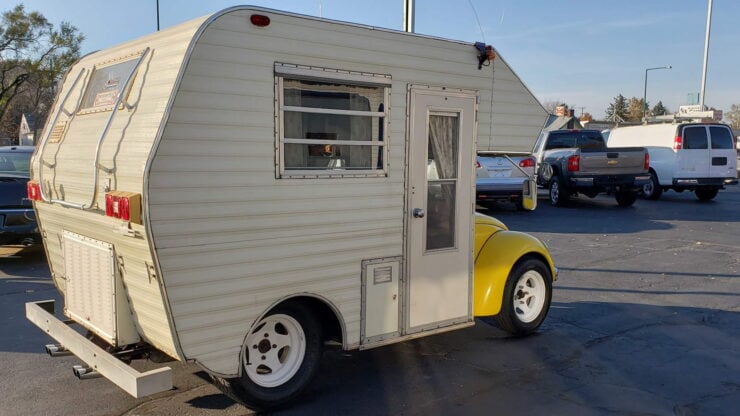 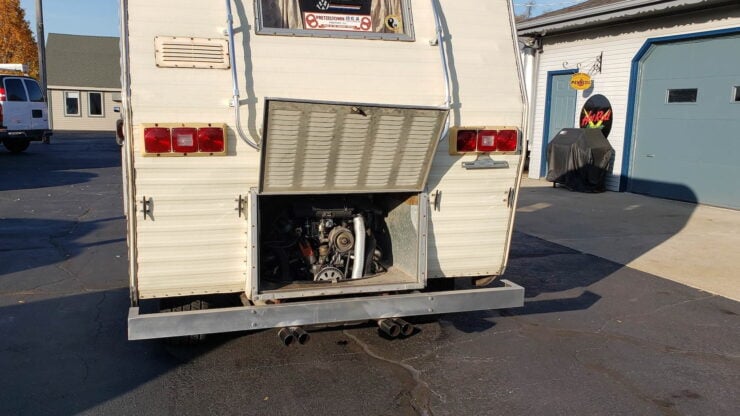 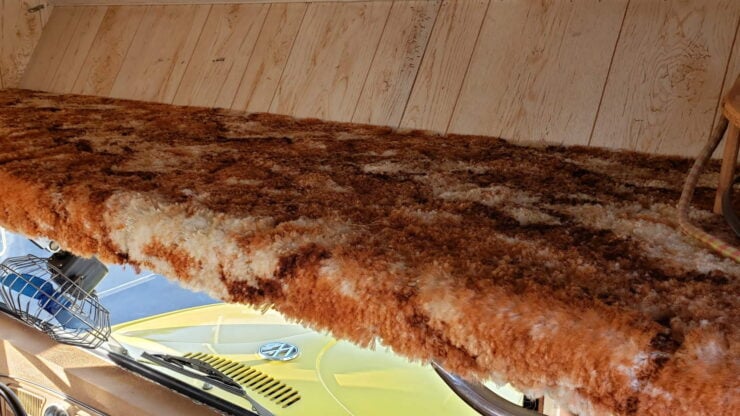 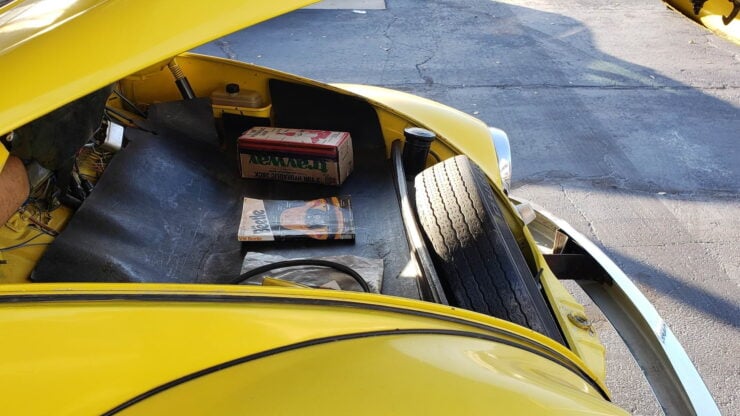 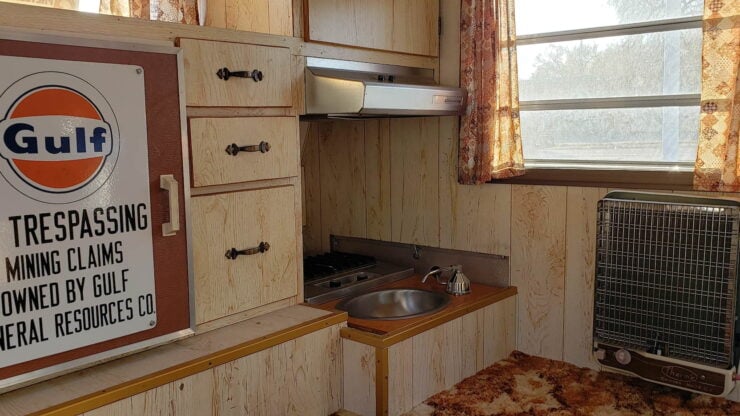 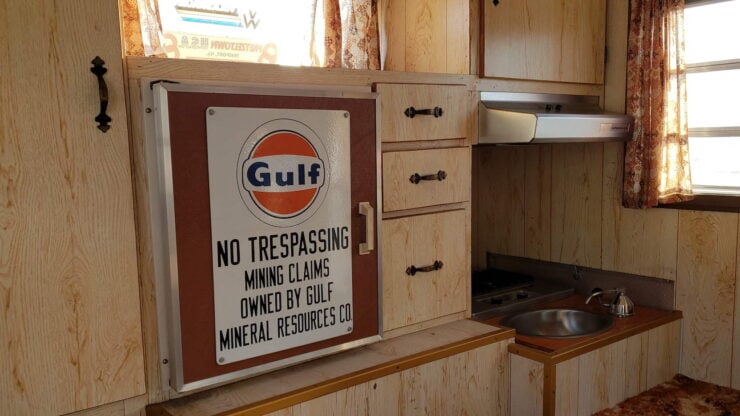 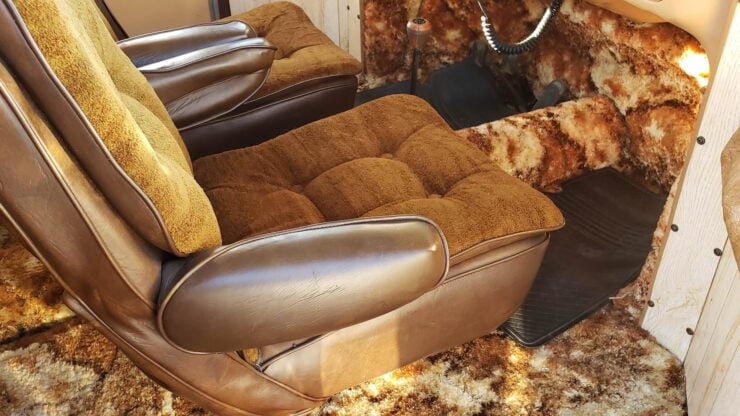 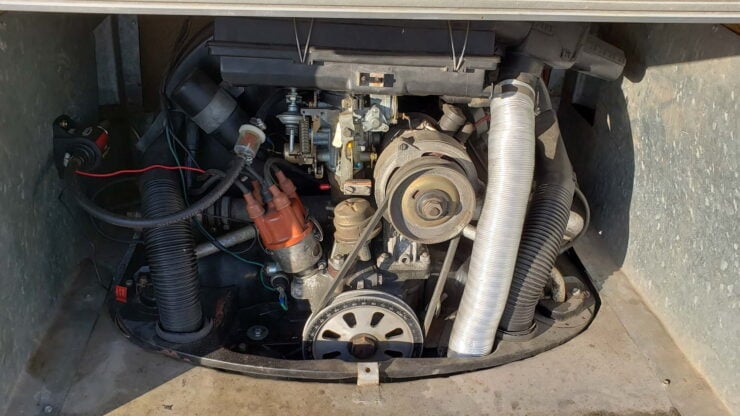 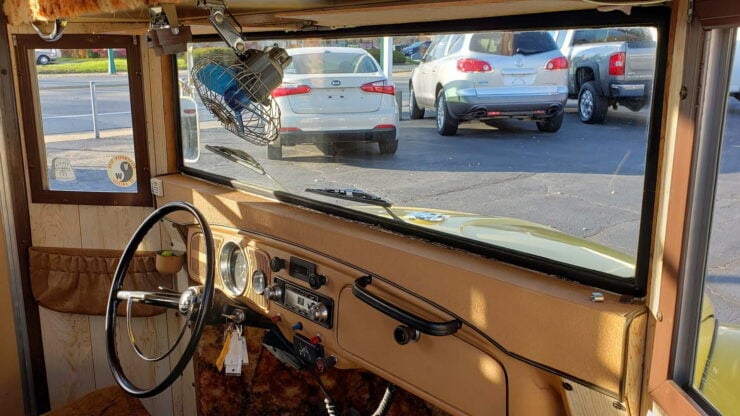 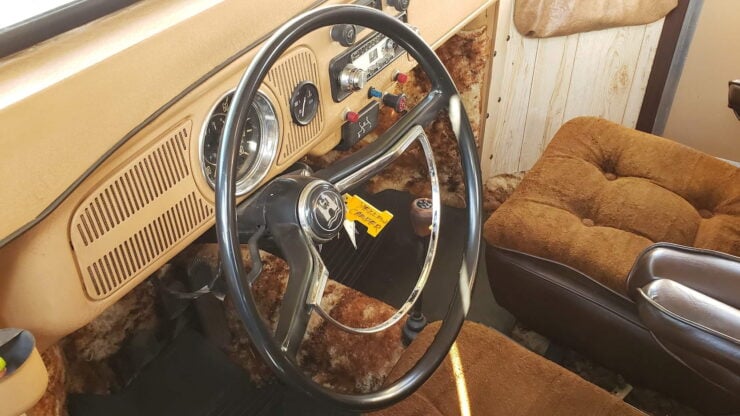 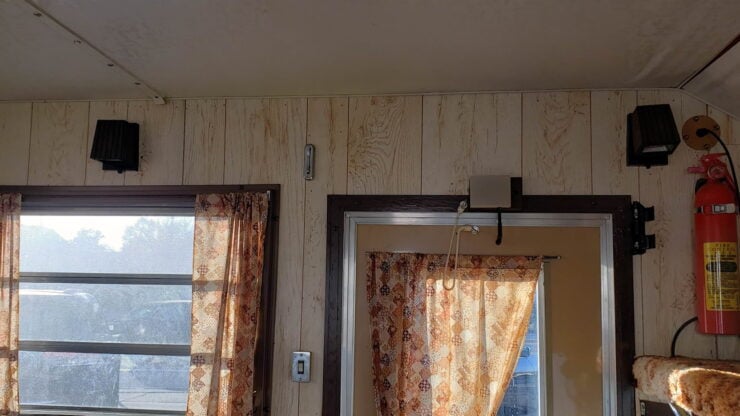