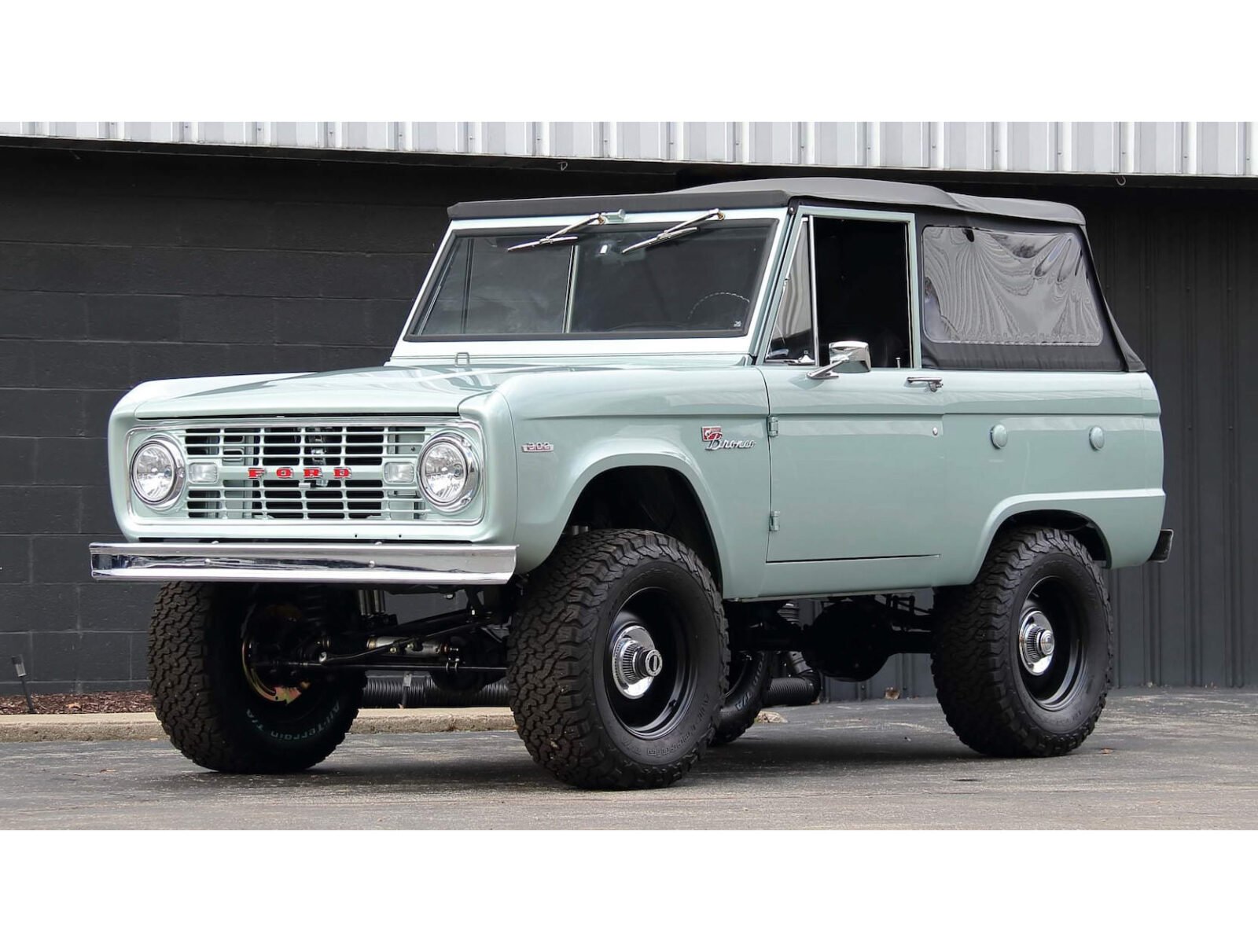 This 1969 Ford Bronco has been through a comprehensive restoration to better-than-new condition thanks to the fitment of a rebuilt 302 cu. in. V8, power disc brakes on all four corners, and significantly uprated suspension including dual shocks front and rear.

First generation Ford Broncos have always been popular, the design has been celebrated as an important work of industrial design as well as a highly functional off-road vehicle and an important early example of the SUV genre.

The Ford project to develop an all new vehicle as a competitor for the Jeep CJ-5 and the International Harvester Scout started in the mid-1960s not long after the release of the Ford Mustang in 1964. Interestingly it would be Donald N. Frey, Paul G. Axelrad, and Lee Iacocca who were largely responsible for the vehicle that became the Bronco – the same team responsible for the Mustang.

The first major surge in popularity of the sport utility vehicle or SUV kicked off in the 1960s, and US auto manufacturers were vying with each other to produce the latest and greatest leisure four-wheel drive. The Jeep and the Scout were the two best sellers in the mid-1960s and Ford saw the potential future of the SUV genre, and they were in the midst of Mustang fever – as their new sports car rocketed to the top of sales charts across the country. 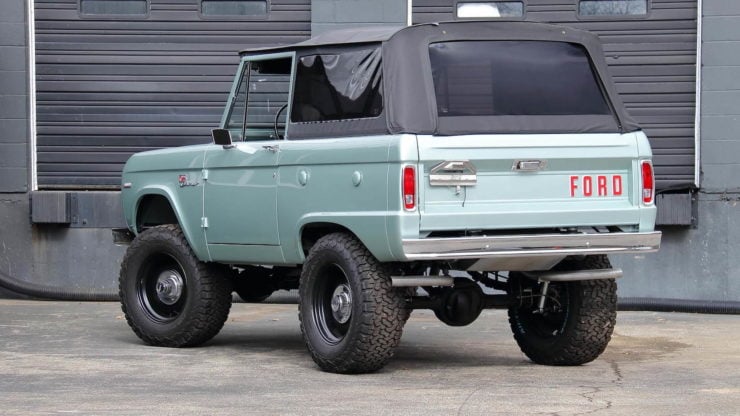 The Ford Bronco was conceived as a similarly sized vehicle to the CJ-5 and the Scout, with the much-loved boxy styling that would characterise the genre for decades and an exceedingly tough combination of suspension and drivetrain for genuine off-road capability.

An all-new chassis was developed for the Bronco, a 92 inch wheelbase ladder frame that positioned it between the Jeep and the Scout. A Ford 9 inch axle was mounted in the rear on leaf springs, up front they used a coil-sprung front axle with a lateral track bar, and all vehicles were four-wheel drive with a “shift-on the-fly” Dana 20 transfer case and locking hubs.

A variety of engines were offered with the first generation Bronco, initially it came with a 170 cu. in. inline six cylinder unit with a few modifications for off-road use including a heavy-duty fuel pump, an oil-bath air cleaner, and a carburettor with a specially designed float bowl which would work normally at a wide variety of angles. In 1966 the 289 cu. in. Ford V8 was offered as an option, and in 1969 this was upgraded to the 302 cu. in. V8. 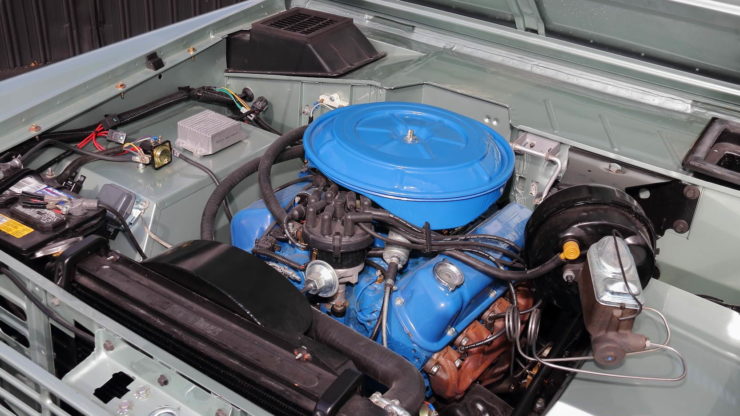 Although the Ford Bronco was released in six generations the first generation models have always been the most desirable. Ford is just days away from releasing an all new series of three new Broncos including one that has its looks based firmly on the first generation Bronco, and if current popular sentiment is anything to go by the new version is going to be a best seller.

The 1969 Bronco you see here has been through a comprehensive restoration, or perhaps I should say a restomod as it hasn’t been restored back to factory stock condition, but to a more modern and more capable specification.

The nut and bolt rotisserie restoration started with an original uncut body which was primed and painted, this was then fitted to a new chassis that was chosen to better accomodate the 302 cu. in Ford V8. Upgraded, lifted suspension was fitted front and back including dual shock absorbers at each corner.

The 302 V8 was fitted with a 4-barrel carburetor and standard cast iron headers that feed into a dual exhaust system. A new transfer case and driveshaft were fitted along with a restored 3-speed transmission, and power disc brakes were fitted front and back for improved stopping power.

A pair of dual fuel tanks were fitted along with a series of subtle modern touches like LED headlamps, an original look radio with Bluetooth connectivity, new gauges and switches, and billet aluminum tail lamp trim. The vehicle now rides on BF Goodrich All Terrain tires mounted to black steel wheels with rally-style center caps.

If you’d like to read more about this Bronco or register to bid you can click here to visit the listing on Mecum. 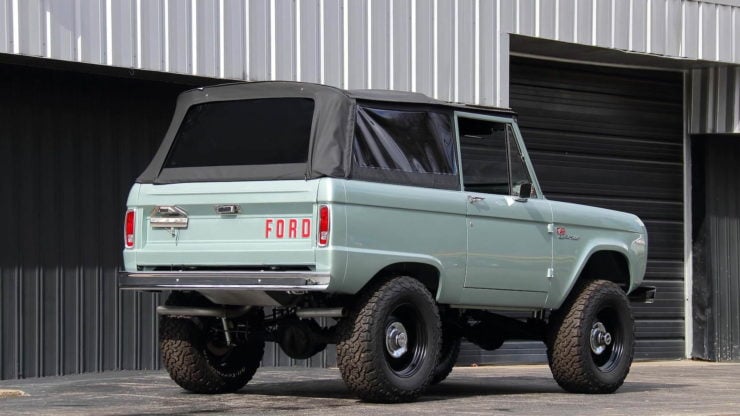 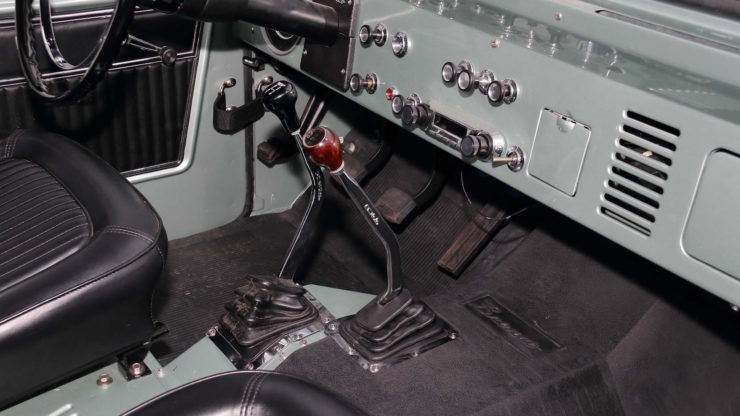 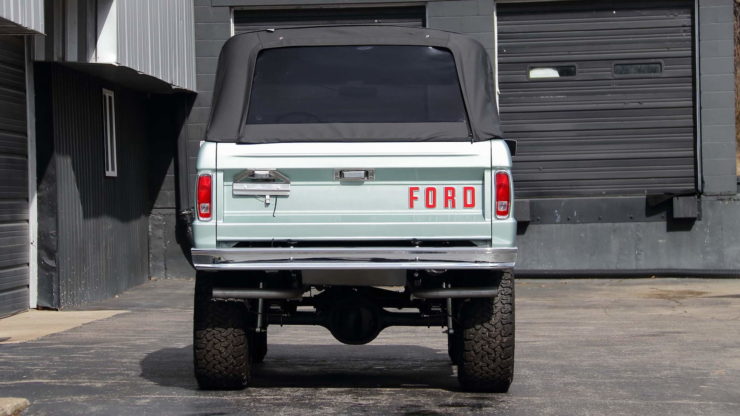 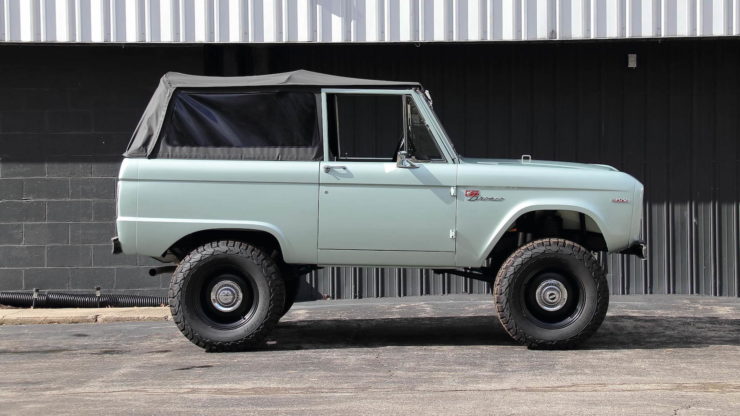 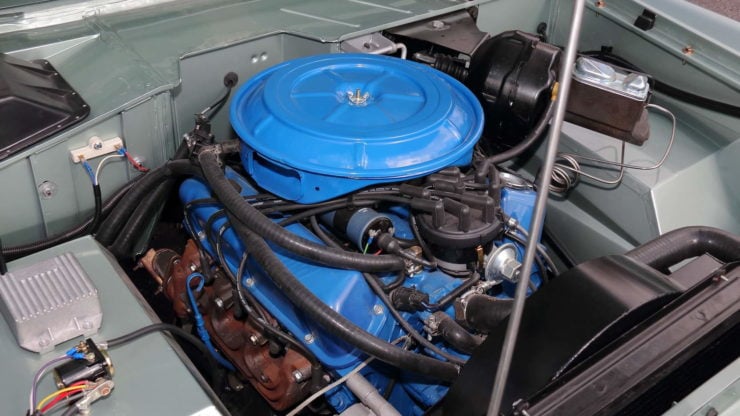 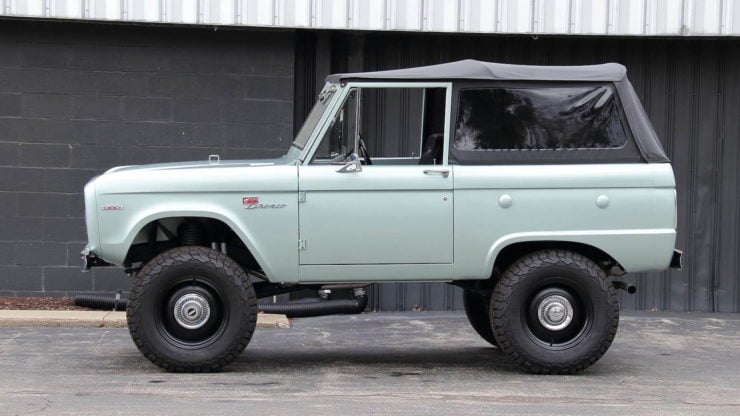 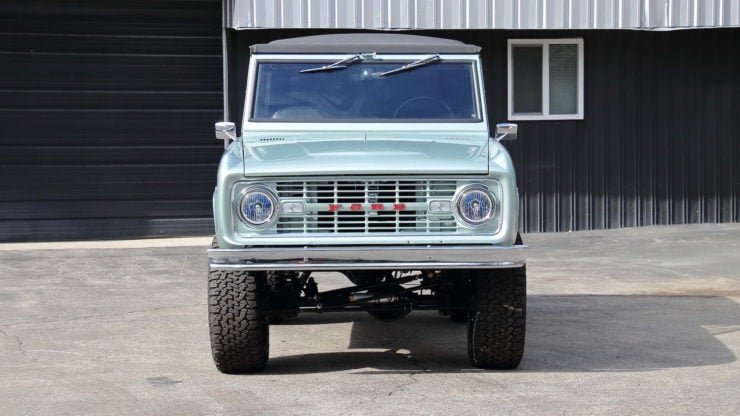 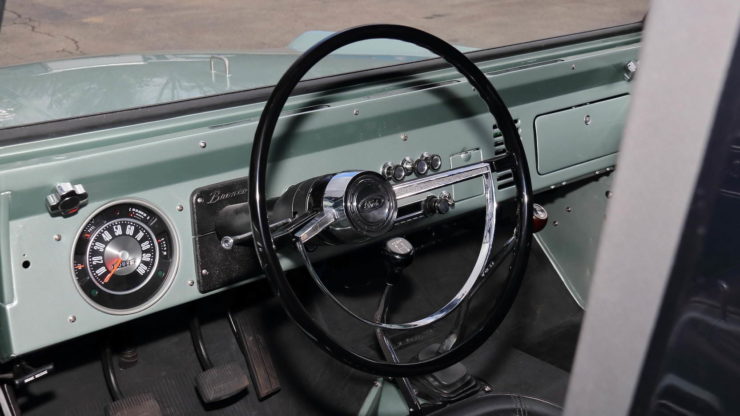 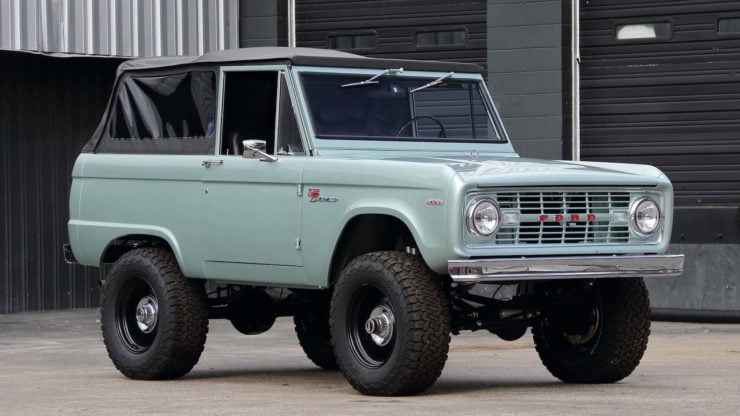 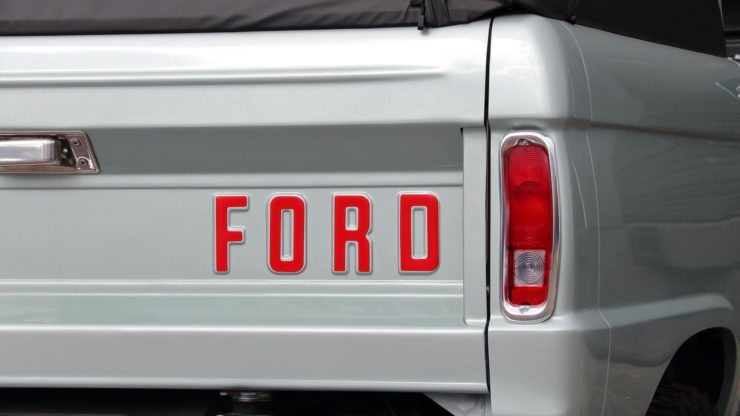 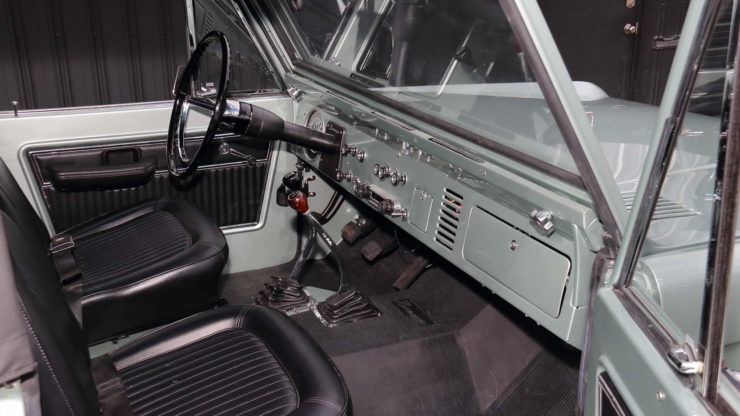 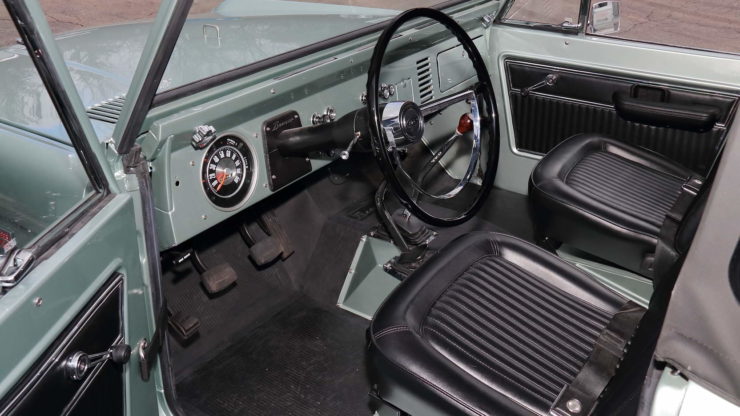 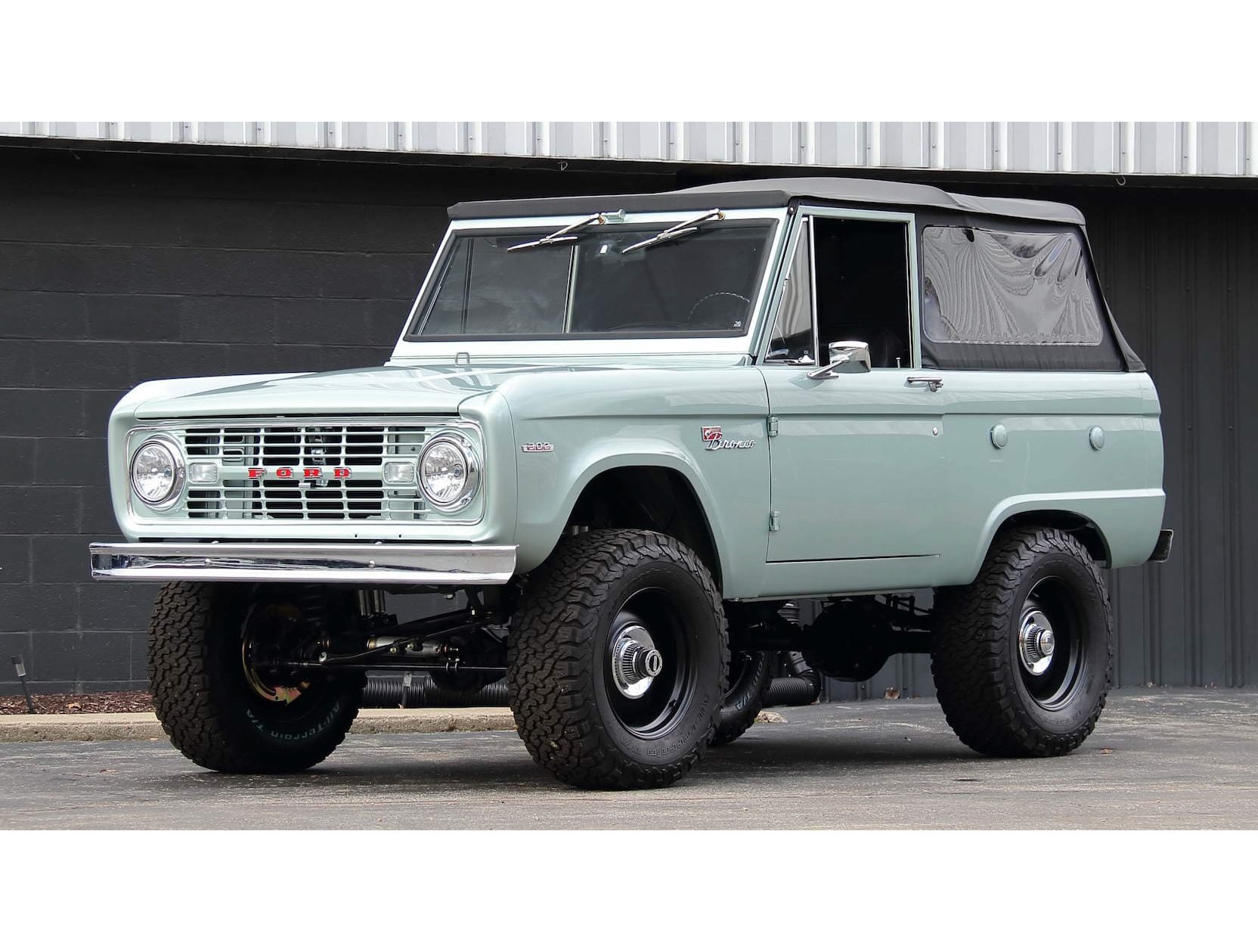