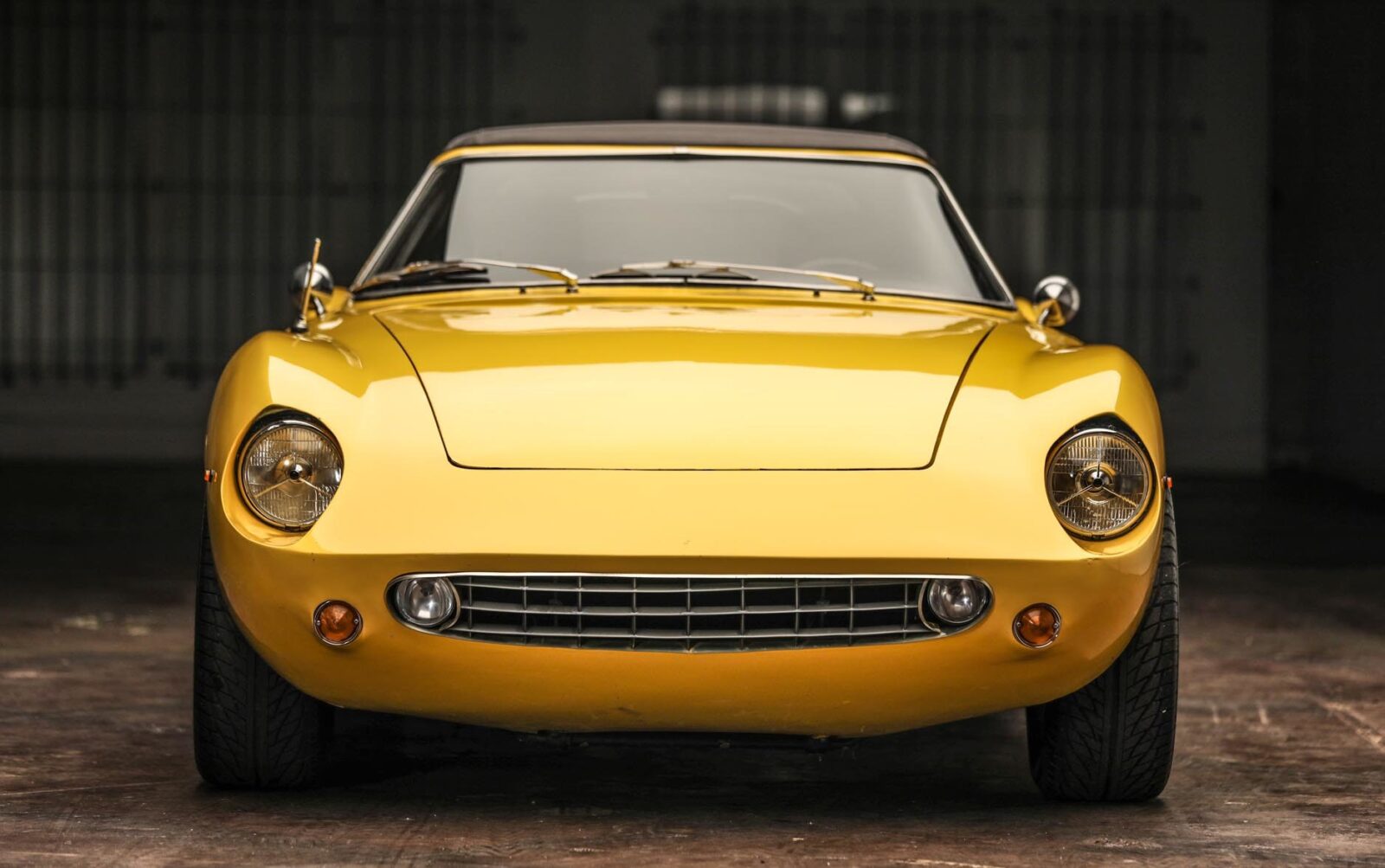 The Intermeccanica Italia is a remarkable ’60s-era sports car designed and built by a small team of Americans and Italians all under the direction of a larger-than-life Hungarian-Canadian man named Frank Reisner.

The history of the Italia starts with a car called the Griffith GT which had a chassis designed by former BRM Formula 1 engineer John Crosthwaite with a body designed by Robert Cumberford and modified slightly by Franco Scaglione.

Jack Griffith of Long Island, New York funded the project with Frank Reisner building the cars in Italy at Intermeccanica. 14 examples of the Griffith GT were sold before the company was shuttered, it was then taken over by Steve Wilder who called the vehicle the Omega. 33 of these were sold before Wilder ran into the same financing problems as Griffith and closed down. 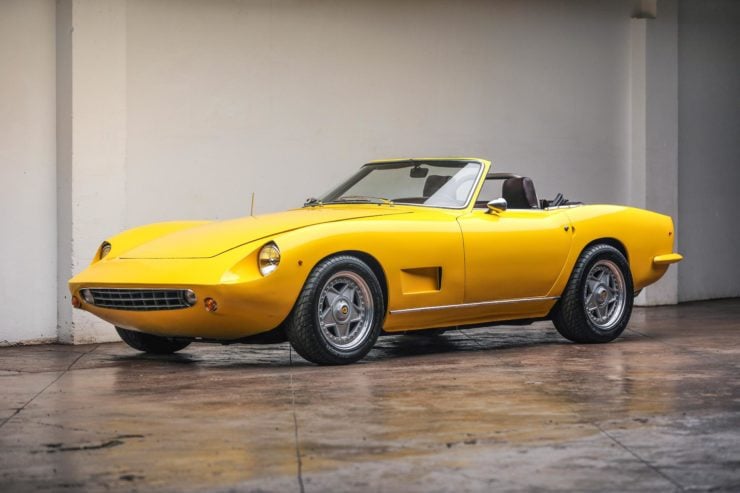 After the Omega went the way of the Griffith Frank Reisner realised he needed to build the car 100% in Italy and then ship to the USA. He already owned a company called Intermeccanica which had been building cars and performance parts in Italy since the late 1950s, so he was uniquely placed to do it.

Once Reisner had succeeded in getting a loan he launched the Intermeccanica Italia, a modified version of the previous cars that was being built in Italy using an American V8, gearbox, and rear axle, as well as many other parts for both their low cost and high availability. 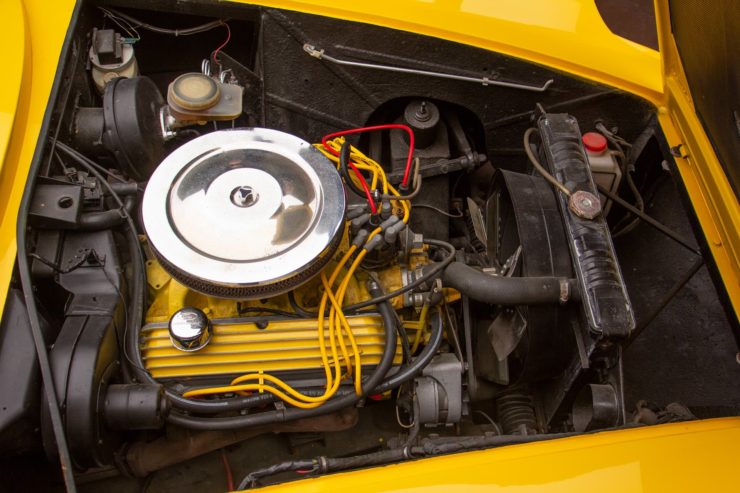 Interestingly, the name of the Italia was originally “Torino”, but Ford registered the name Torino and so the name was changed to Italia. The John Crosthwaite-developed chassis was comprised of square tubular members welded to the Italia’s steel body into a single unit, improving rigidity. Rack-and-pinion steering was fitted, as well as independent front suspension, and there’s a Mustang-derived live axle in the rear with coil springs and radius rods.

Unlike the Italia’s fellow Italian sports cars with their beautiful though remarkably complex engines, the Intermeccanica car used a simple, reliable American V8 – namely the Ford small block in either 302 or 351 cu. in. sizes.

The combination of styling, performance, and affordable maintenance led to the Italia becoming a runaway success, particularly by the standards of a low-volume sports car. Intermeccanica built between 500 and 600 of them from 1967 to 1974, and a new model called the Indra that shared the underpinnings of the Italia was released in 1971. 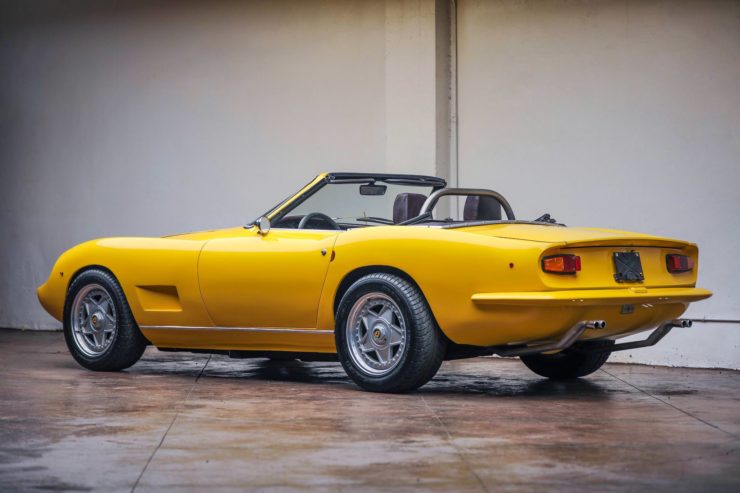 Intermeccanica would slowly transition into the lucrative world of replica manufacturing in the 1970s and the company remains in business today, building some of the most popular Porsche 356 Speedster replicas in the world.

Some still hold out hope that Intermeccanica will one day revive the Italia as they certainly have the engineering and fabrication capabilities, but as of yet there’s no sign of it.

The 1968 Intermeccanica Italia you see here is an early production model, it’s fitted with the 302 cu. in. Ford V8 with a Holley four-barrel carburetor and a four-speed manual transmission. The car is just showing 33,380 miles on the odometer, it’s fitted with a heater/defroster, power windows, a Ford AM/FM radio, it has bolstered late-model adjustable seats and instrumentation including a tachometer, ammeter, and an oil-pressure gauge.

The car is finished in a striking bright yellow with a black interior, there’s a roll hoop that fits under the black folding soft top, and it has a color-coded rear bumper.

If you’d like to read more about this car or register to bid you can click here to visit the listing on Worldwide Auctioneers. It’s due to be sold with no reserve on the 5th of October. 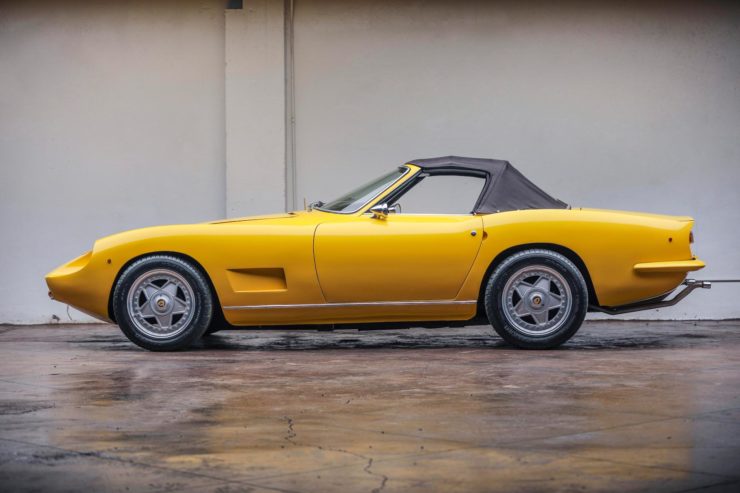 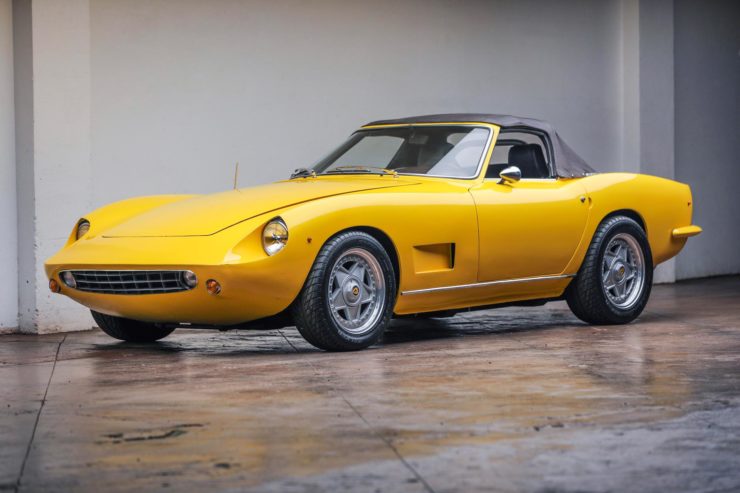 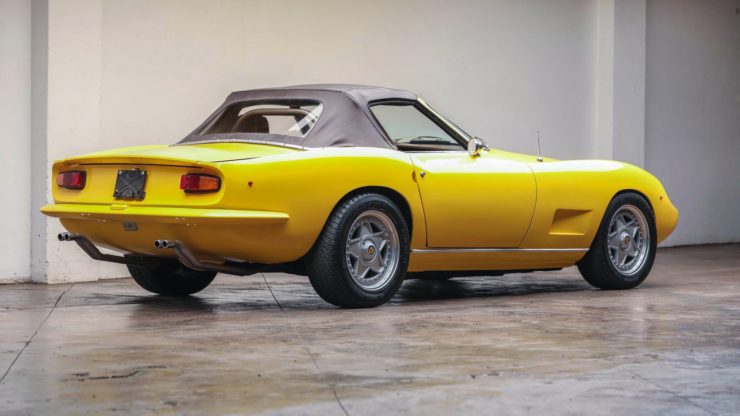 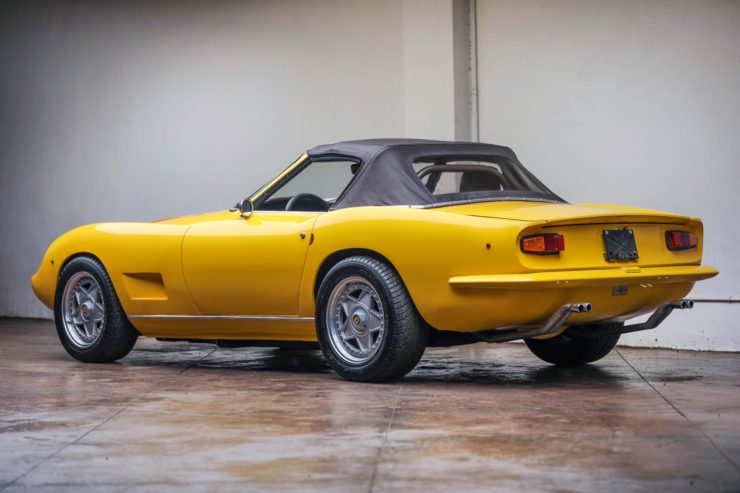 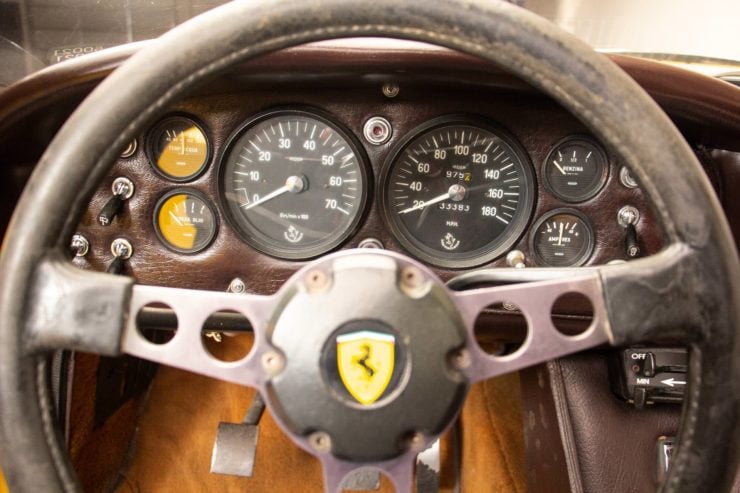 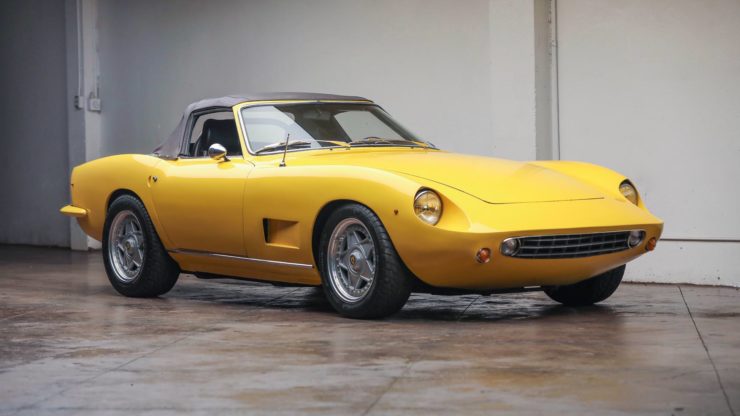 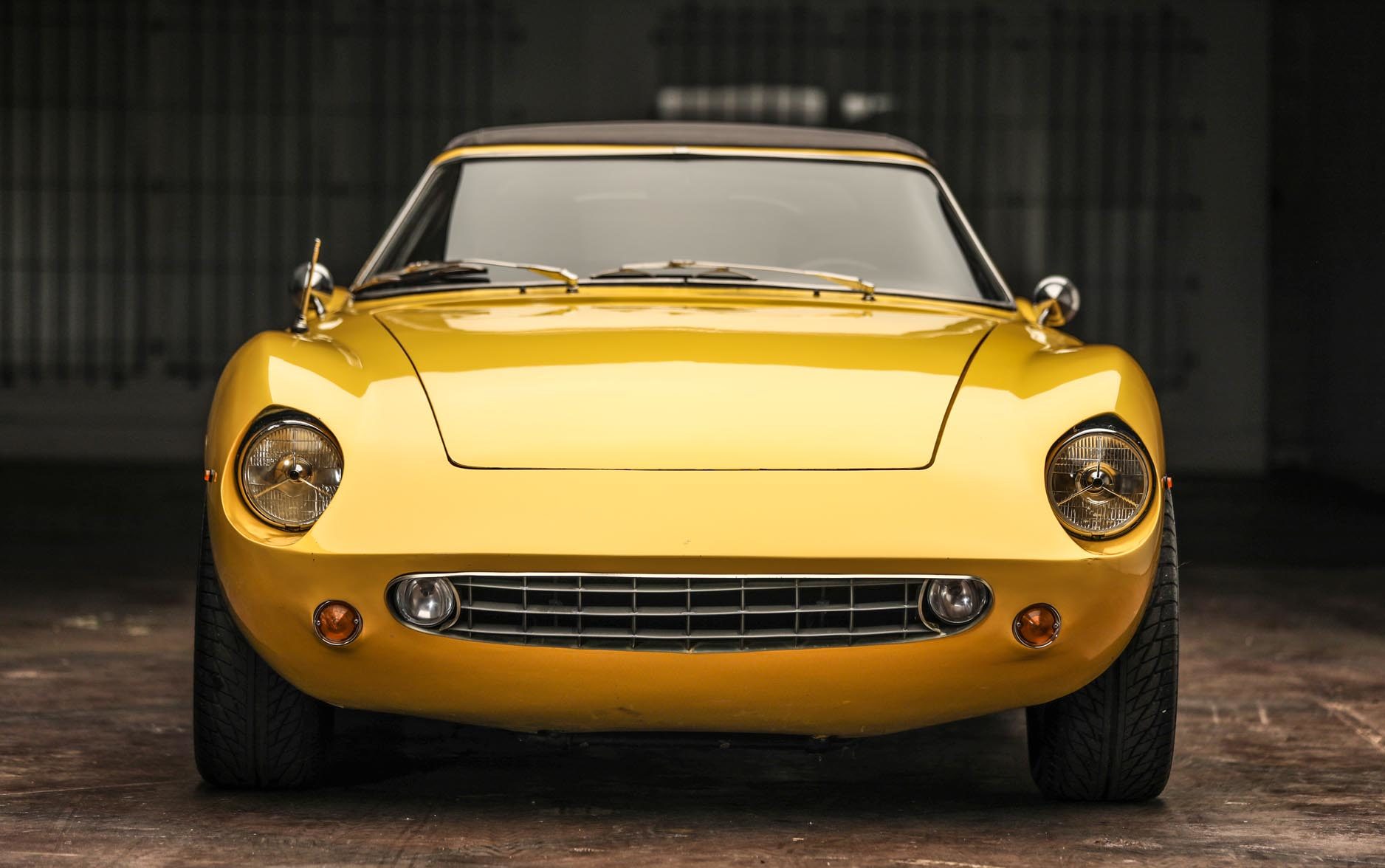