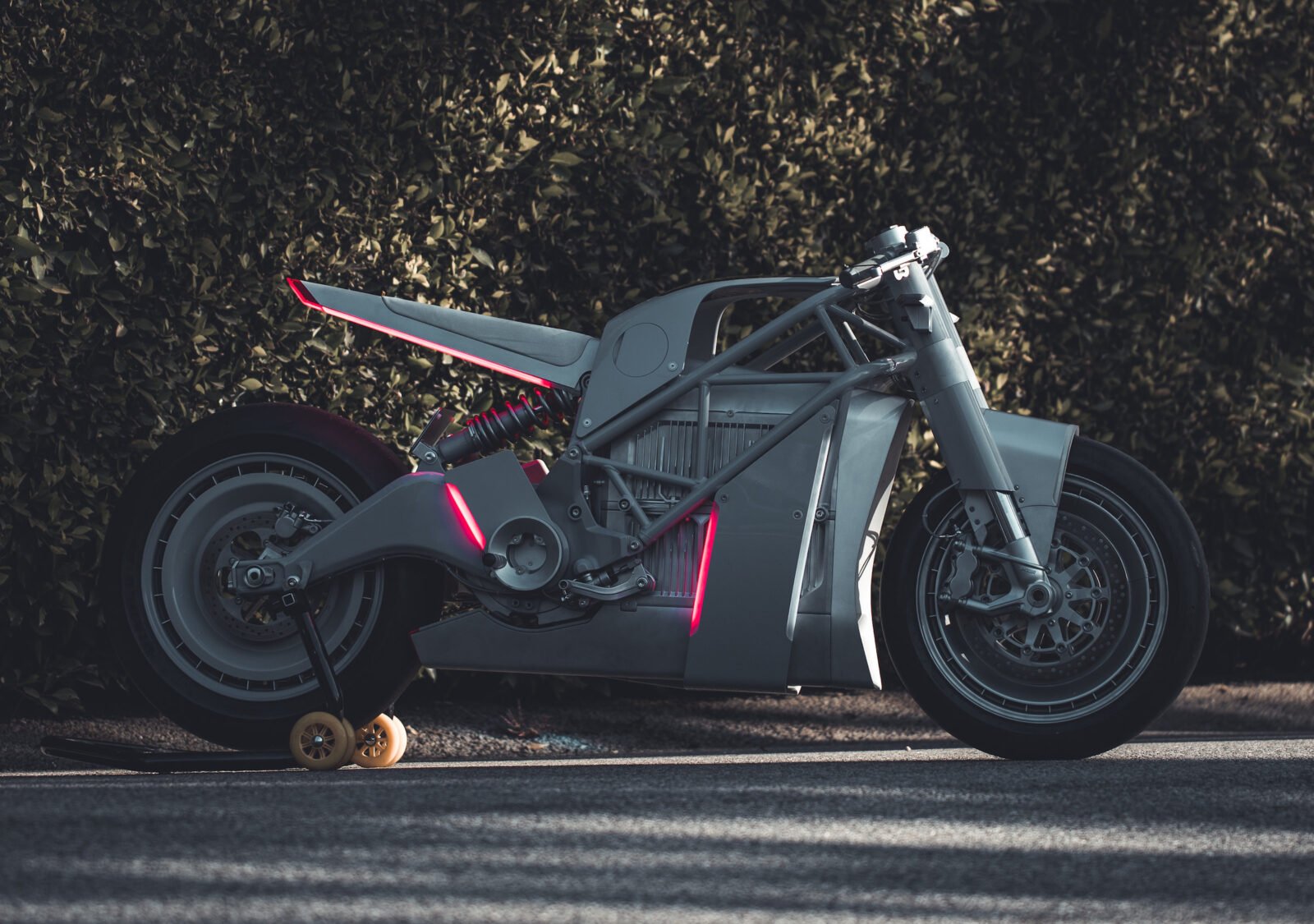 The ZERO XP is a bespoke custom electric motorcycle built by renowned bike builder Hugo Eccles of Untitled Motorcycles in the USA.

Hugo is a little different to the average angle-grinder-weilding garage Jedi, he’s a graduate of the prestigious Royal College of Art in London, and in his 20+ year industrial design career he worked on projects for clients like AT&T, American Express, Hewlett Packard, Honda, TAG Heuer, Ford, and Nike.

The project to build the ZERO XP started when the team at Zero Motorcycles got in touch and expressed an interest in having him turn his attention to their latest model – the Zero Motorcycles SR/F. They supplied Hugo with access to pre-production prototypes, and the long process of sketching, design, and engineering began.

The goal for the build was to keep the core powertrain of the motorcycle largely original, and to focus on a blank slate design based on the SR/F platform. 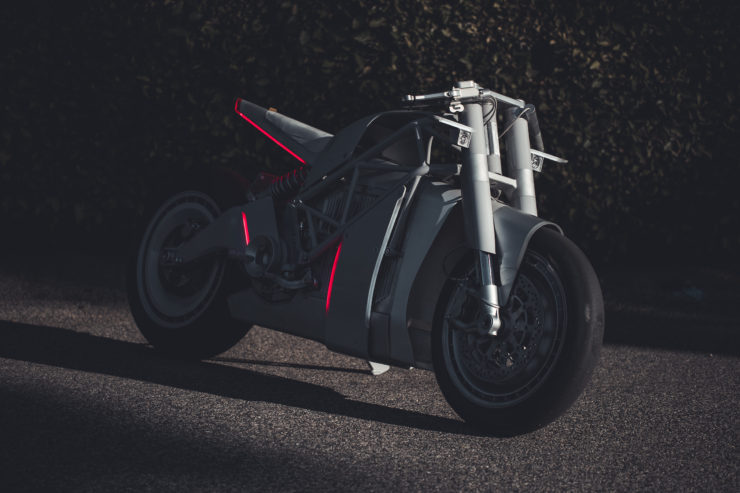 “When you’re dealing with an internal combustion engine, you have built-in physical constraints,” he explains. “The fuel tank has to sit above the motor to gravity-feed the carbs, the carbs are positioned away from turbulent airflow, the exhaust is routed to avoid heating the fuel or the rider, and so on. But these rules don’t apply to an electric motorcycle, and that freedom is an incredible opportunity for a designer. If things like a fuel tank, exhaust, carbs, and clutch are no longer necessary, then what is?” – Hugo Eccles

The Zero Motorcycles SR/F uses an advanced all-electric powertrain consisting of the company’s new ZF75-10 electric motor and ZF 14.4 kWh lithium-ion battery. This permanent magnet brushless motor produces 140 ft lbs of torque and 110 horsepower, giving the SR/F a top speed of 124 mph, and a range of up to 200 miles (322 km).

Impressively, the SR/F’s Rapid Charge System allows the bike to be 95% recharged in just an hour when plugged into a 12kW Level 2 charge station. Due to the fact that electric motors produce 100% of their torque from 0 rpm onwards the SR/F uses a clutchless direct drive system with no traditional gearbox – notably simplifying the learning curve for new riders.

The electric motor is centred within the swing arm pivot point, this gives constant drive-belt tension and allows a slightly slimmer design. The frame is a perimeter trellis design that wraps around the air-cooled battery block, directly connecting the steering head with the swing arm pivot point – this is a design feature commonly used on superbikes to give the best possible handling, when combined with correctly set up suspension of course.

The ZERO XP by Untitled Motorcycles

Once he had the SR/F stripped down to its core architecture Hugo began a design process untethered to the traditional concerns of internal combustion engine powered motorcycles. He realised early on that the bike would need a structure that ergonomically matched a fuel tank, as riders use their legs on either side of the tank and chassis to help grip and turn the bike.

A new machined aerospace aluminum core was designed that contains the batteries, motor, charger, and other control components and incorporates the seat.

“Drag bikes were an inspiration, with the XP, you’re literally riding the motor. This is a deceptively powerful bike and I wanted to physically embody that raw power.” – Hugo Eccles 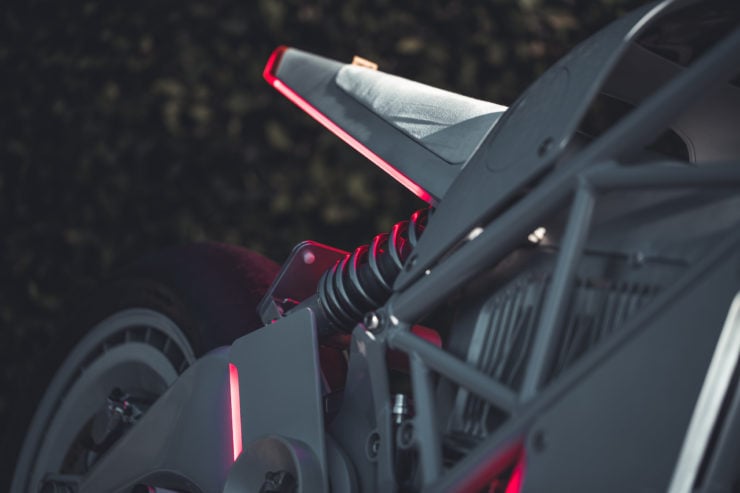 Custom clip-on handlebars were fitted, integrating an internal throttle and minimal switchgear. A series of new body work parts were designed from scratch including a custom seat upholstered in ultrasuede, and custom-designed CNC fabricated polymer panels with frosted polycarbonate edges.

The completed bike looks like it belongs in the year 2037. Although Elon Musk of Tesla famously has no plans to ever develop a Tesla electric motorcycle, one can only imagine it might look a little like this, particularly after the Cybertruck launch.

If you’d like to visit Untitled Motorcycles and read more about their work you can click here. 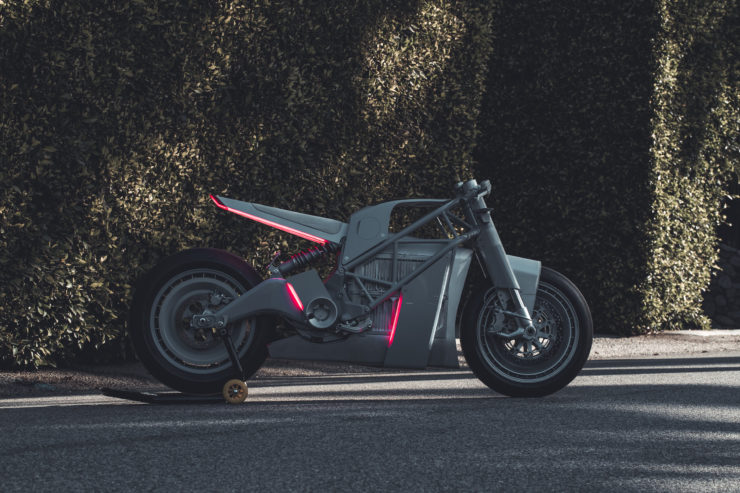 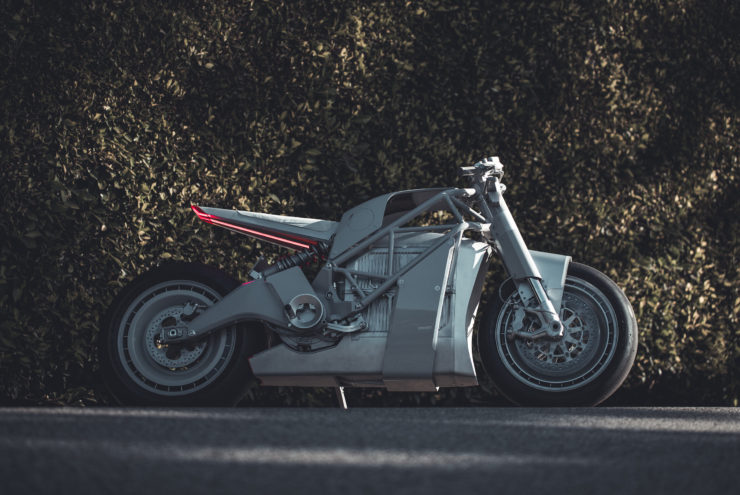 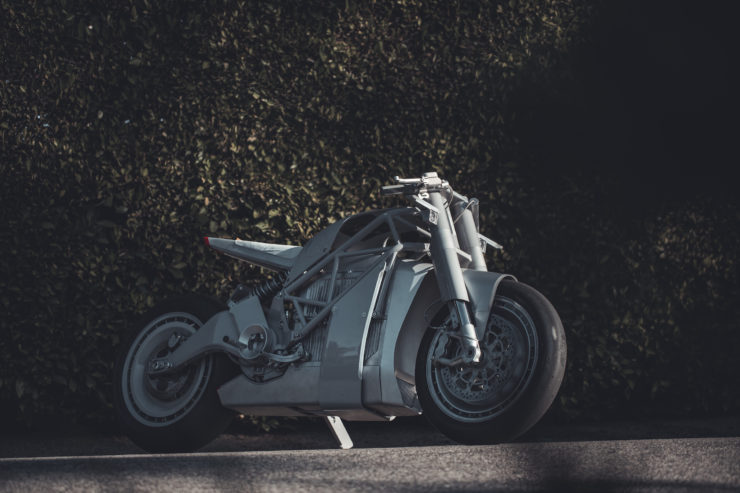 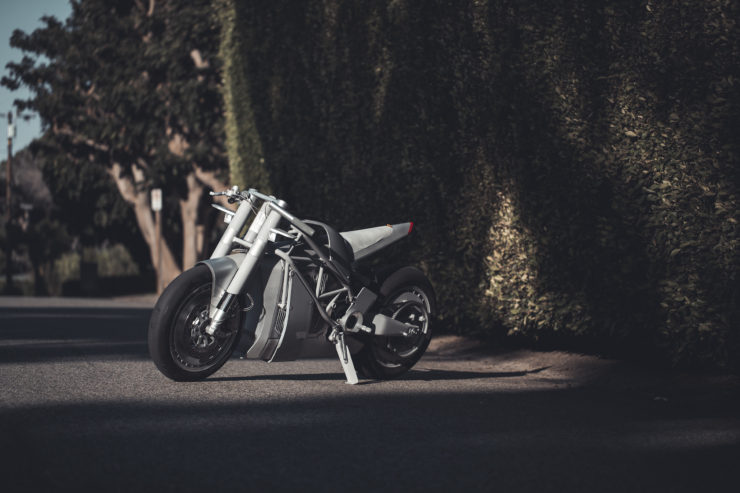 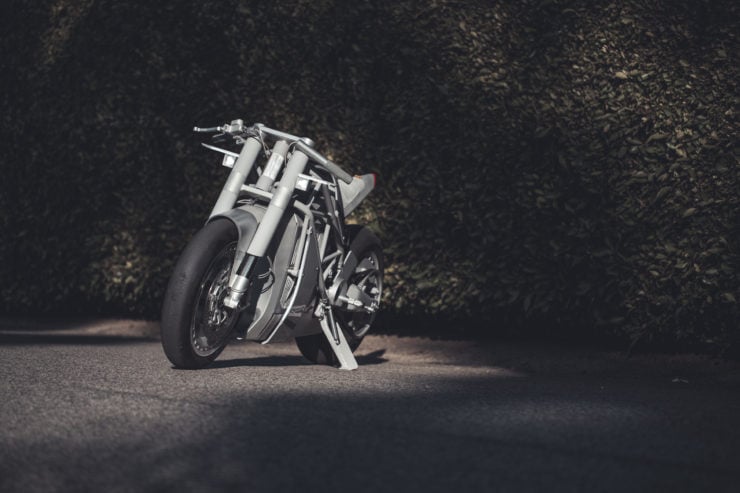 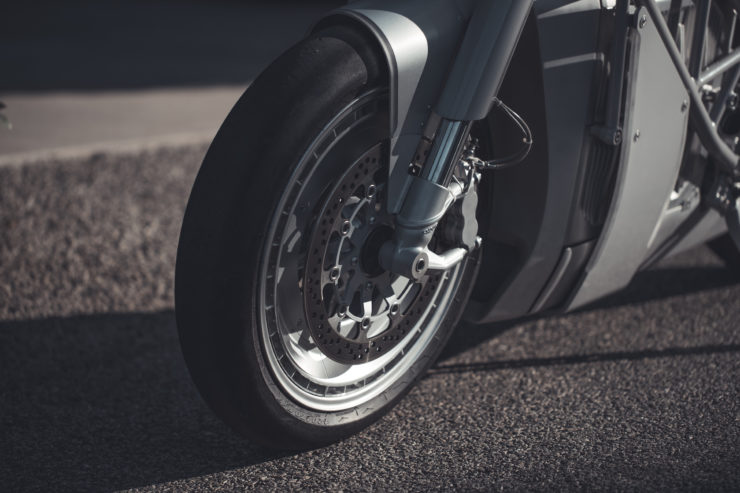 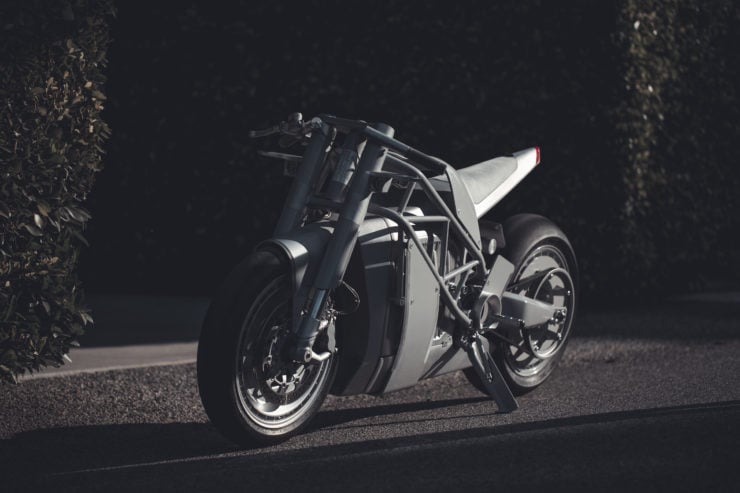 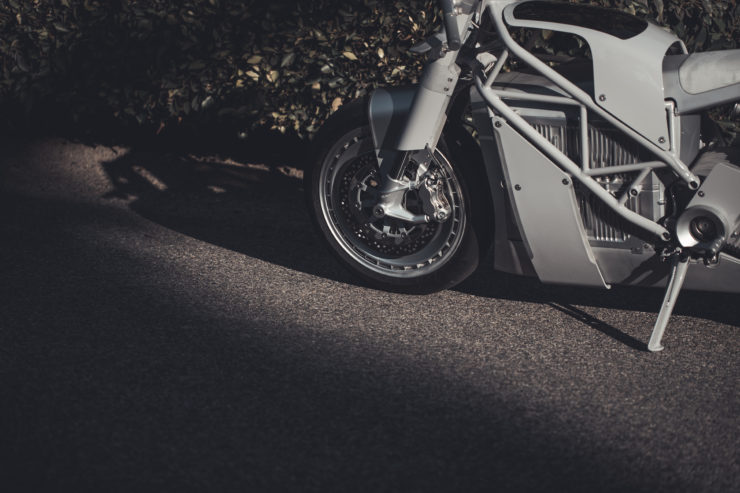 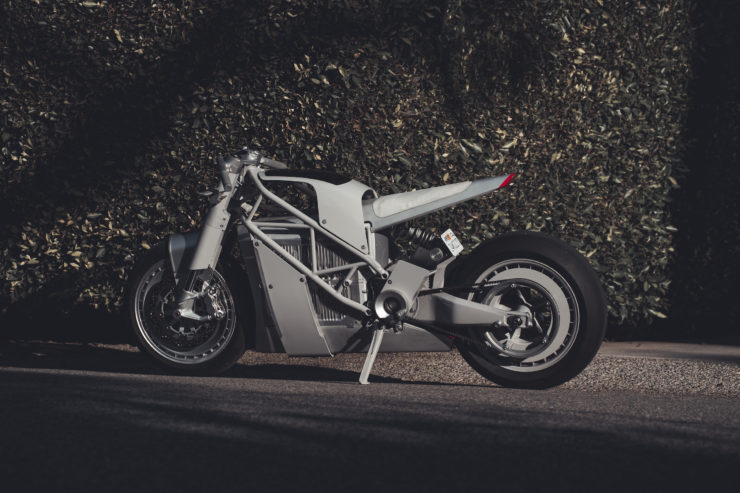 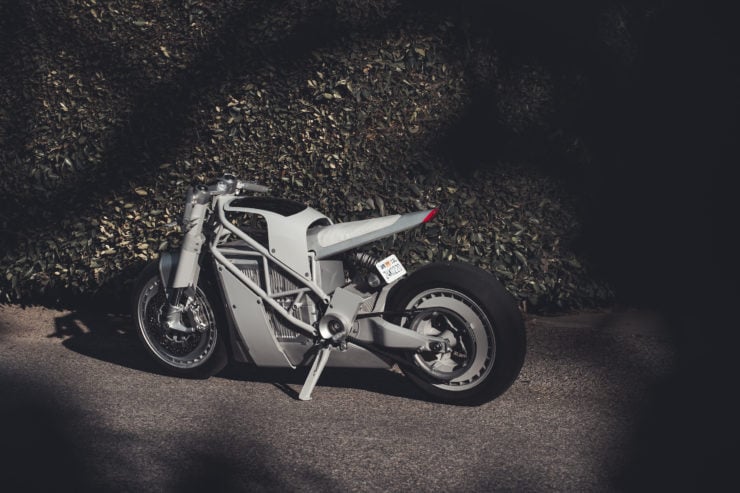 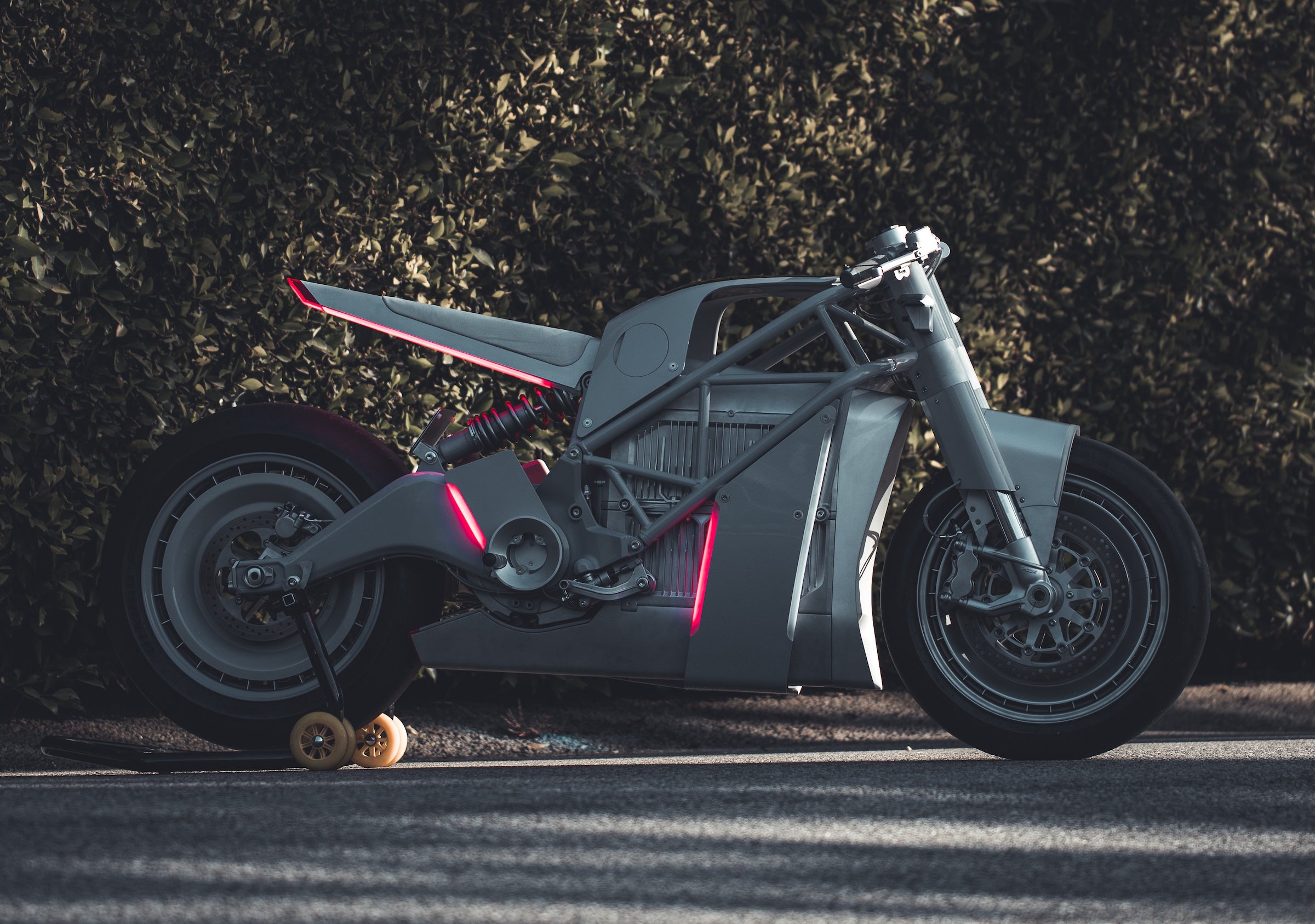 Published by Ben Branch - March 4th 2020
Related Posts
The Brockhouse Corgi: A Folding Motorcycle Based On A Design For WWII Commandos